Has the definite classic roguelike finally arrived on PC? Read on to find out.

I’m going to preface this (p)review by referencing another game. I don’t know whether this goes against any game journalism conventions, but hey, I’m a renegade and I sure as hell ain’t no professional writer or critic.  Just some chap with hands, a laptop and some high falutin ideas that my thoughts have some kind of currency in this messed up world.

Shiren the Wanderer on the Nintendo DS is the perfect game. There. I’ve said it. It’s a grand statement. One fit for ridicule, to gamers unaware of the title. Much like Zelda: A Link to the Past, it shares the same top down 2D art style. It shares the timeless quality sprite and tile work. That’s where the comparisons end. Zelda was a real time game. Shiren is not. It is turn based. Its gameplay is pure roguelike. I’m not talking about johnny come lately ”roguelikes” such as FTL or Rogue Legacy. Who share snippets of rogue game conventions and melded them into something else. I’m talking about a rock hard permadeath rogue game and all that implies. 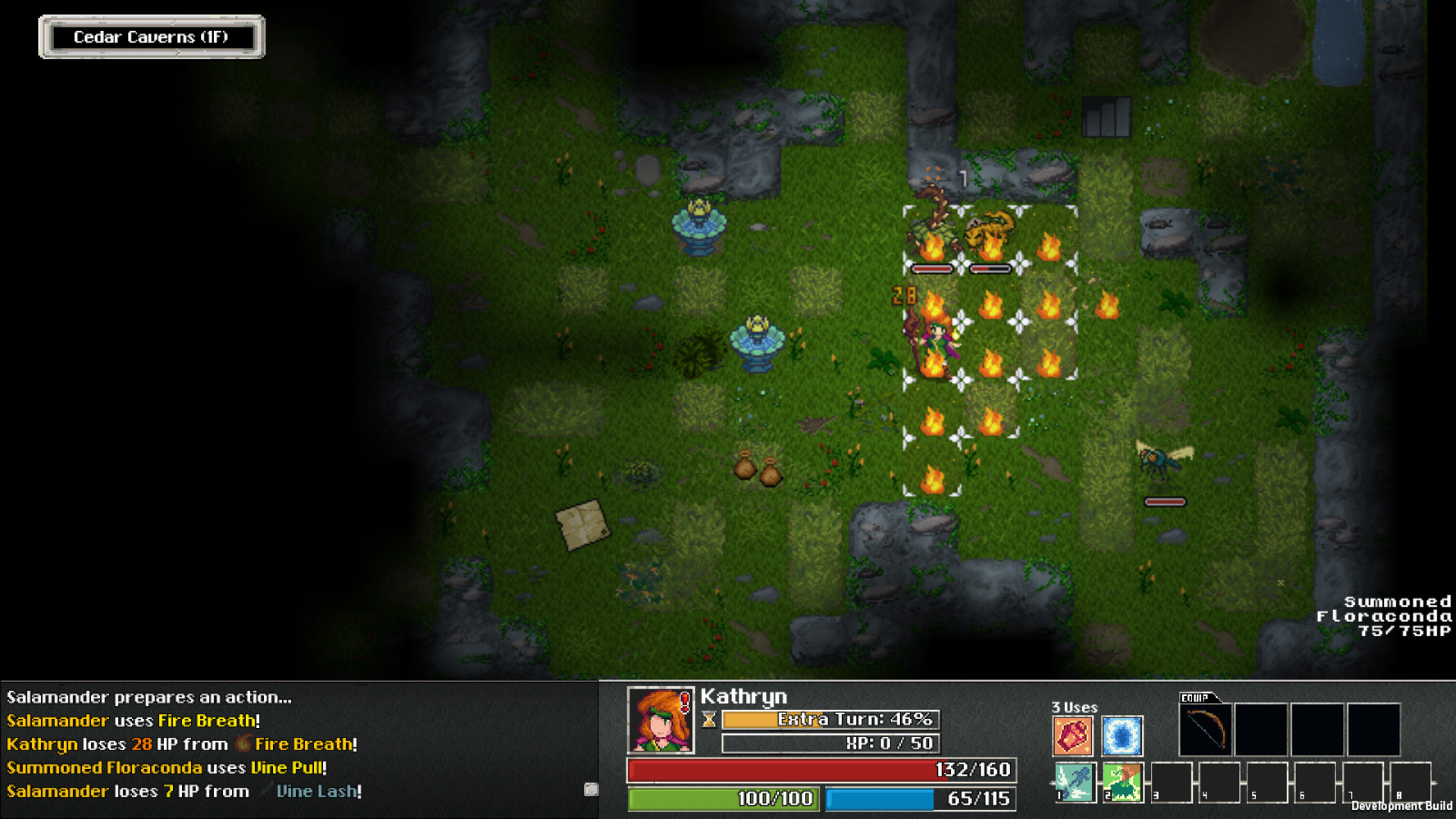 Tangledeep is a passion project from the video game composer Andrew Aversa(Zircon). A veteran of the OCReMix forums. During the day he is a professional music producer. So, in his spare time, he has teamed up with some of the like-minded folks from Adventurepro, to create the best roguelike on PC. The game was kickstarted after a successful campaign and now enters its early access phase on Steam. The title is slated for a retail launch this December.

If you have played any of the mystery dungeon games by Chunsoft then you will feel immediately at home with the core mechanics. For newcomers to the classic roguelike gameplay here is a wiki style definition of what to expect.

All the above are the basic prerequisites for a classic roguelike. Tangledeep adds more elements onto this framework. The main hub for Tangledeep is Riverstone. Here, you can find all the usual RPG vendors: a healer, shopkeep, food seller, banker and a rumour gatherer (quest giver). There is also a monster corral, set within the glade known as Riverstone Grove. This is run by a rancher. If you knock out a monster using a special hammer, he can corral them. This gives you bonuses when fighting creatures of the same family. 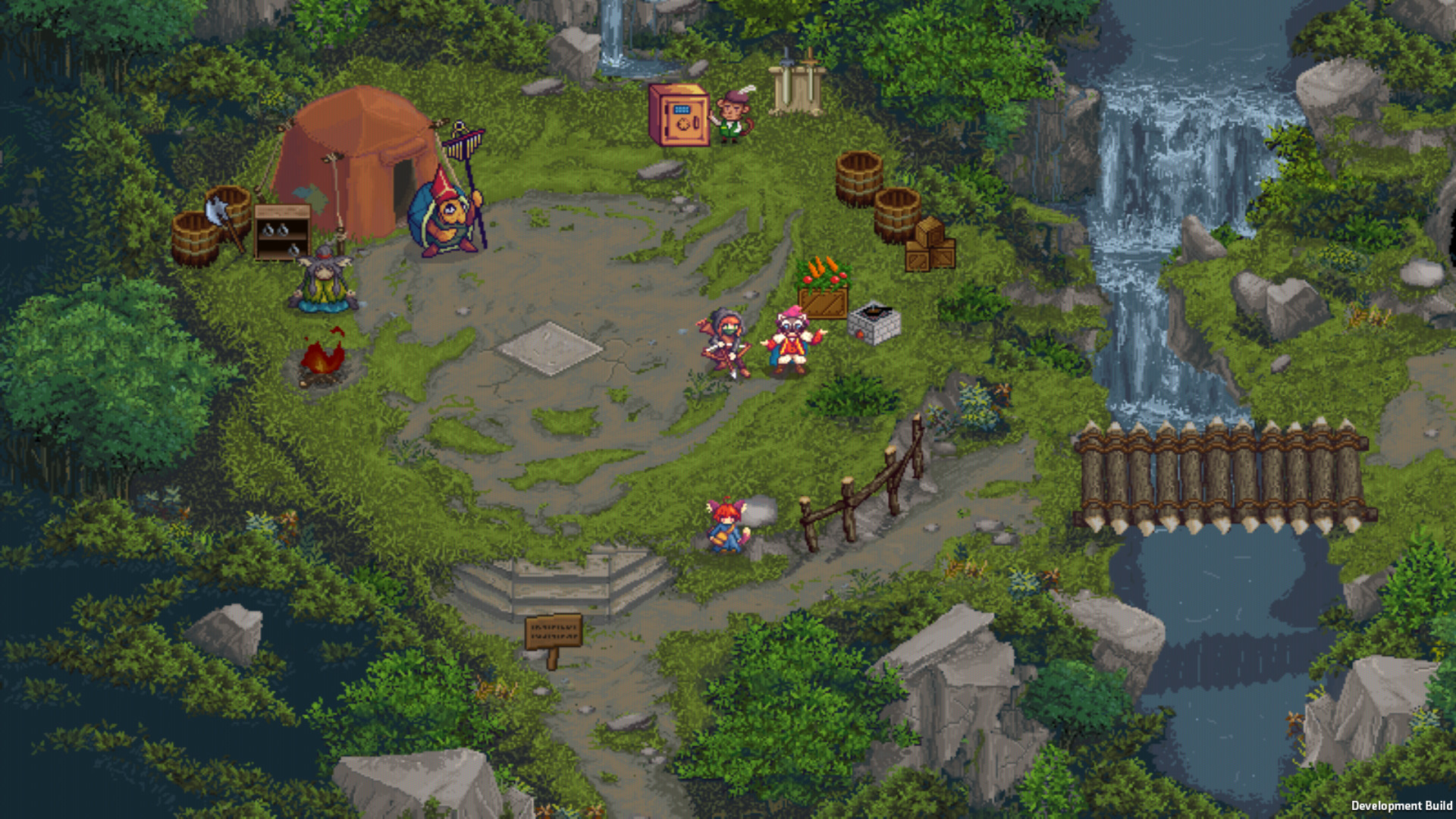 There’s also the addition of environmental hazards, which hinders character movement. Mud roots the player. It takes two turns to navigate this gooey stuff. The first turn roots the player, the second enables the player to traverse to solid ground. You can negate this obstacle if you equip a certain item. I’ll not spoil the surprise. Wading through streams also reduces stamina. Up to now, I’ve not found an item which cancels this penalty.

The only two missing game mechanics I have found with my limited time in the game are as follows; No weapon degradation or rust systems. There also appears to be no hunger element, often present in games like Shiren or One Way Heroics. To me, there is no loss here. Both systems I’ve found to be both tedious and tiresome. This is a personal preference and purists might be of a different opinion. 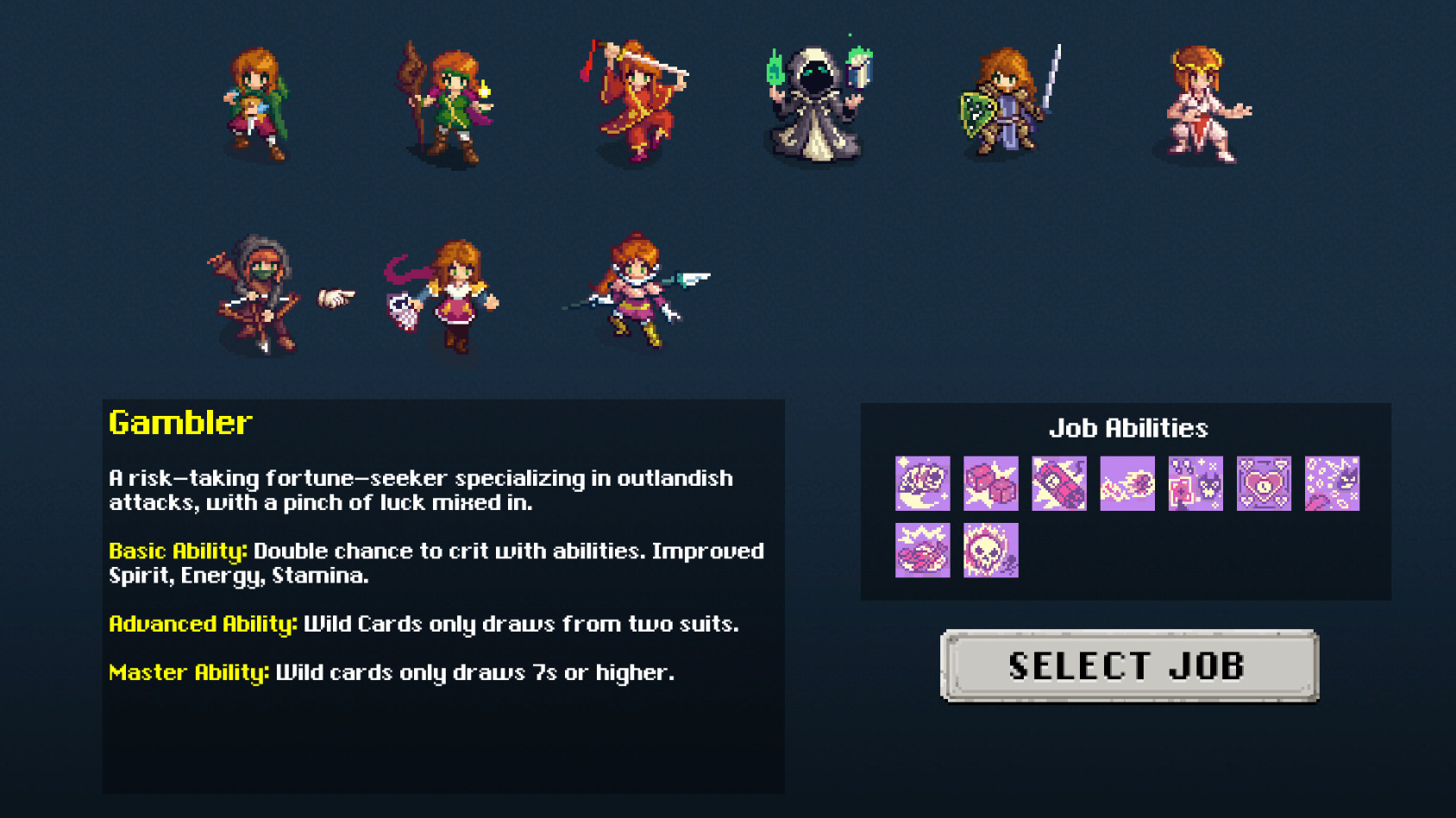 There are nine characters to choose from in the current build of the game. Each one has up to twelve jobs(skills). That’s a whole load of options and enough variety to sate the most grizzled, battle hardened roguelike veteran’s particular preference of dungeon adventure. Here’s a rundown of the included classes.

Obviously, the world has moved on since the 16bit era. Gamers expect a certain amount of luxury. Games are not bound by cartridge limitations and old technology. Development kits have progressed exponentially. This has translated to an anticipated level of polish required for any title to succeed in a fiercely competitive market place.

Even at this early stage, Tangledeep has a load of QOL features. Let’s start with control schemes. The game supports, gamepad, keyboard+mouse, old school keyboard with numpad movement and mouse only modes. I’ve tested the gamepad option using my trusty battered Xbox360 pad. The default setup is snappy and intuitive. My preferred preference is Mouse only. This helps combat my RSI, by given my aching tendons a rest. All the default control modes can be tweaked and rebound to any key or button. This is done from the usual Unity pop up box before the game starts(removed in latest build) and the in-game options screen.

It’s a credit to this small team, to have all these features implemented before the game hits early access. No obtuse control system. No elitist, PC only, carved in stone, non-bindable key configurations. It casts a harsh light on lazy developers, who argue about the purity of controls. A classic example is the first version of the Binding of Isaac. This is not an acceptable standard, in today’s digital store arena.

Moving on to the audio section; there are three independent sliders for music, SFX and footsteps volume. There is also mute audio when alt-tabing the game. A feature, many streamers and YouTubers will find very handy.

Graphics options include; the ability to change the resolution, window / fullscreen mode, zoom scale and frame cap from 30 to 144fps. All on the fly, without any need for a restart. There is also an option to toggle scanlines to further add to the 16 bit aesthetic.

Gameplay settings include; toggle switches for tutorial popups, auto pickup items, XP gains and player/monster health bars. These are all great features that let the player customize the feel of the game for their own preferences. There is also an inbuilt help wiki which describes in detail all the basic fundamentals of the game systems and world. 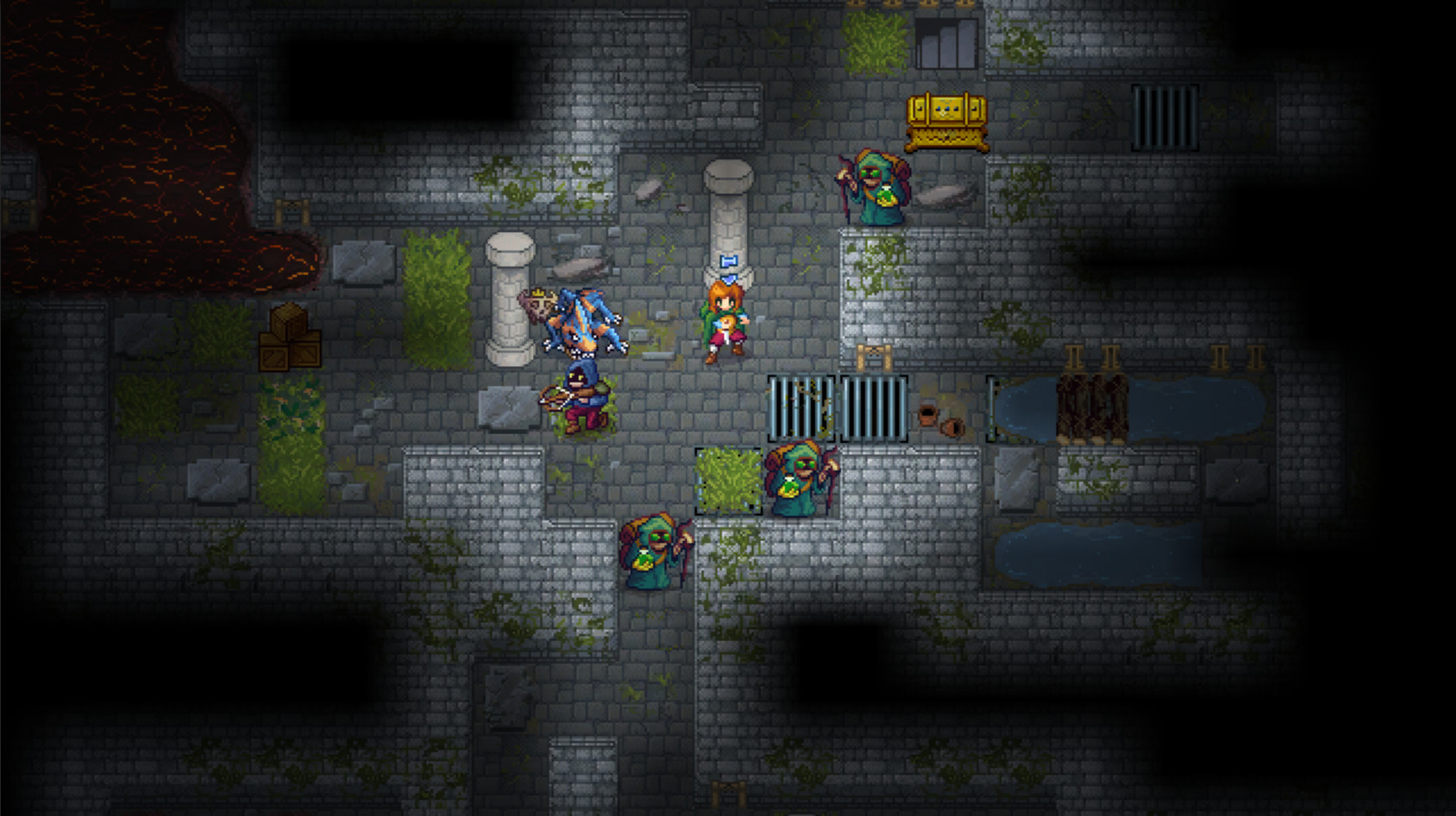 The golden era of the SNES is the inspiration for the pixel art style of the game. It shows. Classic titles such as Chrono Trigger and Secret of Mana had beautiful hand drawn sprites, tiles and animations. Tangledeep replicates this to perfection. This kind of art is a labor of love. It takes many hours to recreate this, even in the modern era. Cell by cell spell animations and lush backgrounds are a top draw and immerse the player into a heady, colorful nostalgic trip. All the NPC’s, monsters and player characters share that retro idle bob as I call it. If you played Final Fantasy Tactics then you will know what I mean. The screen is not static. The game world is brought to life with flowing rivers, bubbling lava pools and flickering torches. This level of attention, to the little details, lifts the aesthetic beyond the norm and into the realm of classic Nintendo/Squaresoft titles.

The game’s soundtrack and audio don’t pull any punches. Not only has Zircon penned the superb main theme. He has called on the help of some of the most talented fellows in the music industry, to further bolster the quality of the score; Grant Kirkhope (GoldenEye, Perfect Dark and Banjo-Kazooie) and the legendary Hiroki Kikuta (Secret of Mana, Seiken Densetsu 3 and Soulcalibur V) contribute with a couple of tunes. The soundtrack was created using the Superaudiocart technology. This is a custom sound library which perfectly captures the sound and feel of the audio chipset found in the SNES. 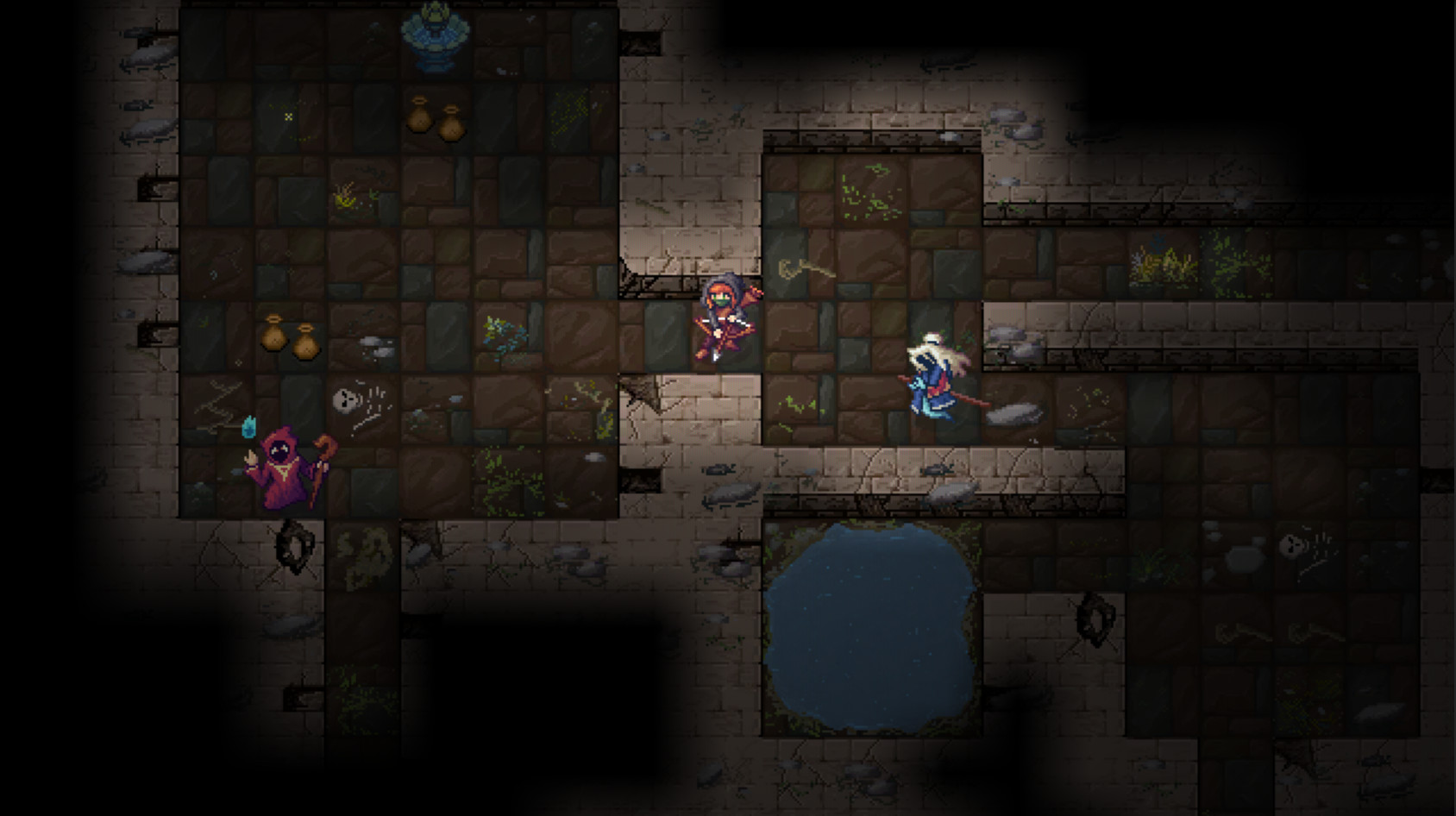 Underpinning the audio feel, Spot fx abound. Items zing when you equip them. Budoka’s hundred fist skill is accompanied by a crunchy, satisfying 16-bit noise barrage. Much akin to the 70’s era Bruce Lee foley work. Footsteps slosh when navigating streams and swords *ching* when hitting heavy armored foes. Yet again, these incidental little details elevate the feel of the game to another level.

The one thing I’ve failed to describe in this preview is any kind of gameplay run through. I omitted this because half the fun of playing any roguelike is the adventure and exploration of the game world.

What I will document is the variety in the gameplay. In the 21 hours I have sunk into the game so far, I’ve only tried out two classes. Namely; the Paladin and the Budoka. These have resulted in completely different experiences. The Budoka is the king of melee and therefore you have to rethink your mindset when approaching foes and mobs. On the other hand, the Paladin required a more considered attitude, being a much weaker character and having a radically different skill set. The discovery of what armour sets suit the class also plays a massive part in the learning curve. This is the pure essence of roguelike games and what makes them so addictive. The player starts with an empty canvas of the world and slowly builds a knowledge base through discovery and painful trial by fire, ice or other magics.

Taking all this into consideration, this is the most enjoyable roguelike I played on the PC. It just hits the sweet spot in terms of mob variety, skills, and environments. I’m super excited for the new content over the coming months.and this is Zircon’s first roguelike! It’s some achievement. I bet Chunsoft will be spooked when the game hits Steam properly this winter.