Rakuen is one of the best storytelling games of 2017 and you should buy it.  Now.

Rakuen has the potency of a violinist’s last note. The bow moves, the fingers tighten, and the string sings with a cry of joy,  pain, anguish, or hope.

A spotlight shines down and the musician bows her head in silence, surrounded only by the circle of light and blackness of the stage around her.  The audience, frozen in place from the tenderness of the moment, tries to gather themselves from the emotion of her performance.

Yes, Rakuen is like that.  I never saw it coming.

Here, out of this sweet little game packaged in an RPGmaker wrapper with happy faces and cheerful dialogue, came a tempest of storytelling.  Make your comparisons to other games like To the Moon if you like, but this game can make you pause for a moment, shocked at the very real drama that unfolds within a single scene. One minute I am picking Sila Berries, the next I simply forget to breathe as the tragedy of the story leaves me with that sinking feeling in my gut as if I am falling.  Perhaps it rang too true with me, maybe I’m a softie.  What I can say without a doubt, though, is that Rakuen makes the player actually care about characters like very few games can. 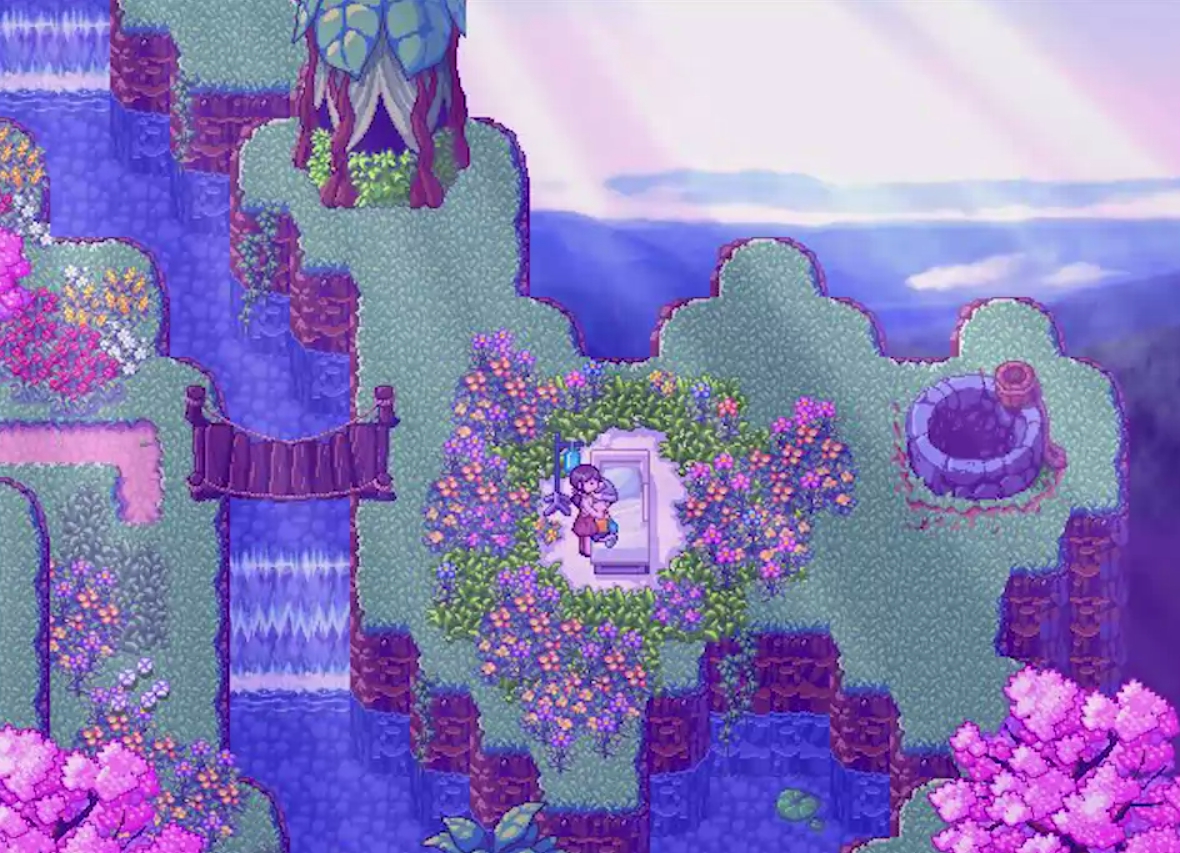 What I’ll begin with is our lead character, Boy, a young child, of perhaps eight years of age.  He is in a hospital, along with many other characters, recovering from an illness.  A doctor informs him of a thief that is stealing items from the hospital, and to the Boy’s surprise, his favorite book, Rakuen, has been stolen as well.  The Boy sets out to find the culprit and retrieve the book, leading to an exploration of the hospital by opening drawers, discovering keys, collectibles, and solving puzzles along the way.  The real meat of the game opens up after speaking with the entire cast of hospital residents and staff. Once the book is retrieved, the Boy’s Mom appears and she stays with him throughout the rest of the story.  She gives him a key to unlock the book’s magical land of Rakuen, which apparently is not just a story, but also a fantasyland juxtaposed to the real world of the hospital.  Strange portal doors begin to be revealed, and the Boy and his Mom travel to Rakuen through these doors.  Once there, they discover the land of Rakuen is in dire straits.  The powerful forest guardian spirit, Morizora, has fallen into a dark sleep due to the negative energy of the Envoy spirits who are changing the forest into a land of doom and desolation.  It’s up to the Boy and his Mom to save the land by helping the inhabitants cope with their problems and collecting parts of a magical song called Mori no Kokoro in order awaken Morizora.  Once awakened, Morizora can grant the Boy a single wish and save the forest. 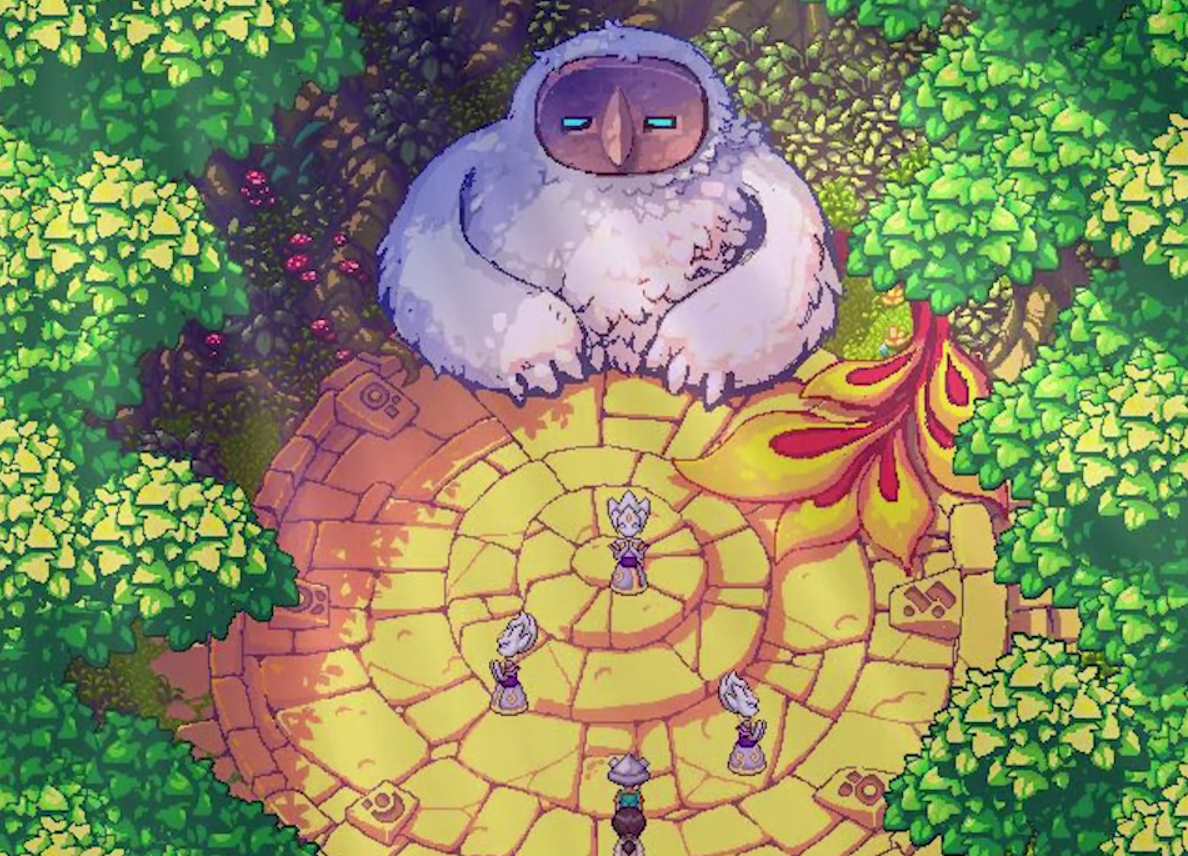 Right here is where the game takes on some adventure gameplay that feels quite a bit like the Blackwell series of games.  Two characters are being played at the same time, the Boy and his Mom, to uncover clues and find out the tragic story of the other characters with the sole intention of helping those people find peace.  Each time you help someone, you get a piece of the song, Mori no Kokoro.  What you won’t need to worry about, however, is how to combine items.  That part of the game is done automatically once you figure out the puzzles and locate the keys or objects required to progress.  That said, the puzzles are cleverly broken into sections that take some thought to figure out.  There is nothing incredibly hard, yet you may get stuck occasionally due to a single key element that has yet to be uncovered.  Rakuen has the uncanny ability to layer the clues and puzzles in such a way that the answers may be elusive even if the actual solution is right in front of you.  Most of the difficult puzzles are in the first few sections, with the latter half of the game being much easier to get through.

The main part of the gameplay that separates Rakuen from other games is that there are counterparts in the real world of the hospital.  For example, with Winston and Gemma, Gemma is in a coma in the hospital with her husband Winston at her side.  When going to the land of Rakuen, you see the exact same couple with Gemma sick in bed and Winston caring for her.  In order to set these lives straight, you must visit their past, and patch together the story.  The key here is that you interact with their past and show each character how to unburden themselves from the weight of their unhappiness.  Each time a song is sung that becomes a piece of the final Mori no Kokoro song to awaken Morizora.  There is no fighting, no leveling up, or weapons.  Players are only able to help people not fight them. 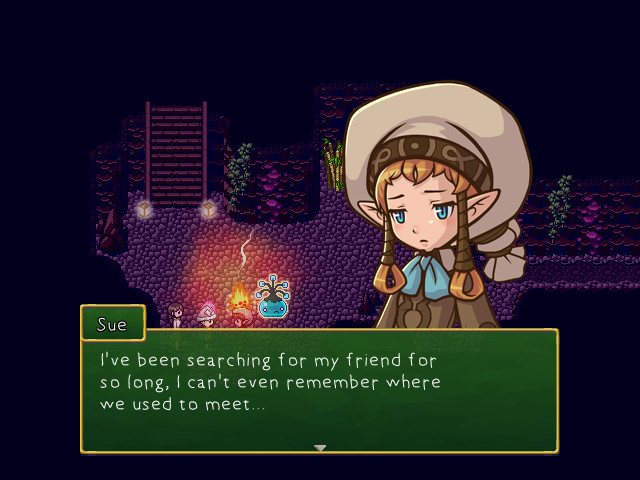 So, at this point, you may ask, “What’s so special about that?”.  For one, there is the dynamic of a child who is dealing with the arduous task of assisting these people with his mother by his side.  Just like in Blackwell, the secondary character protects the main character, guides them, and helps with useful hints here and there.  It also forms a relationship, one of the key components that made Blackwell successful, when two people are involved with each other you feel that connection between them.  It not only moves the story along, it creates the opportunity for the mother to become a significant part of the plot.

Secondly, and perhaps most importantly, Rakuen creates segmented drama.  There are scenes where you want to continue with the story but have to unlock a series of events that go further than a simple explanation.  A mere storyline is not enough.  There are properly set-up scenes, not unlike a theater play.   Here, Rakuen bravely drops hints of underlying secrets while keeping the big secrets in mystery until the final curtain drops.  You complete one area only to discover another hidden alcove with insight into the backstory of someone, or a tiny snippet of life much like the calm before the storm.  And then, there is the presentation of pacing.  You might be completely unaware of the power of a scene until you get to the center of the story and have your heartstrings pulled when it all finally clicks together.  It takes a lot of care and effort to pull that off correctly, and Rakuen does it in spades. 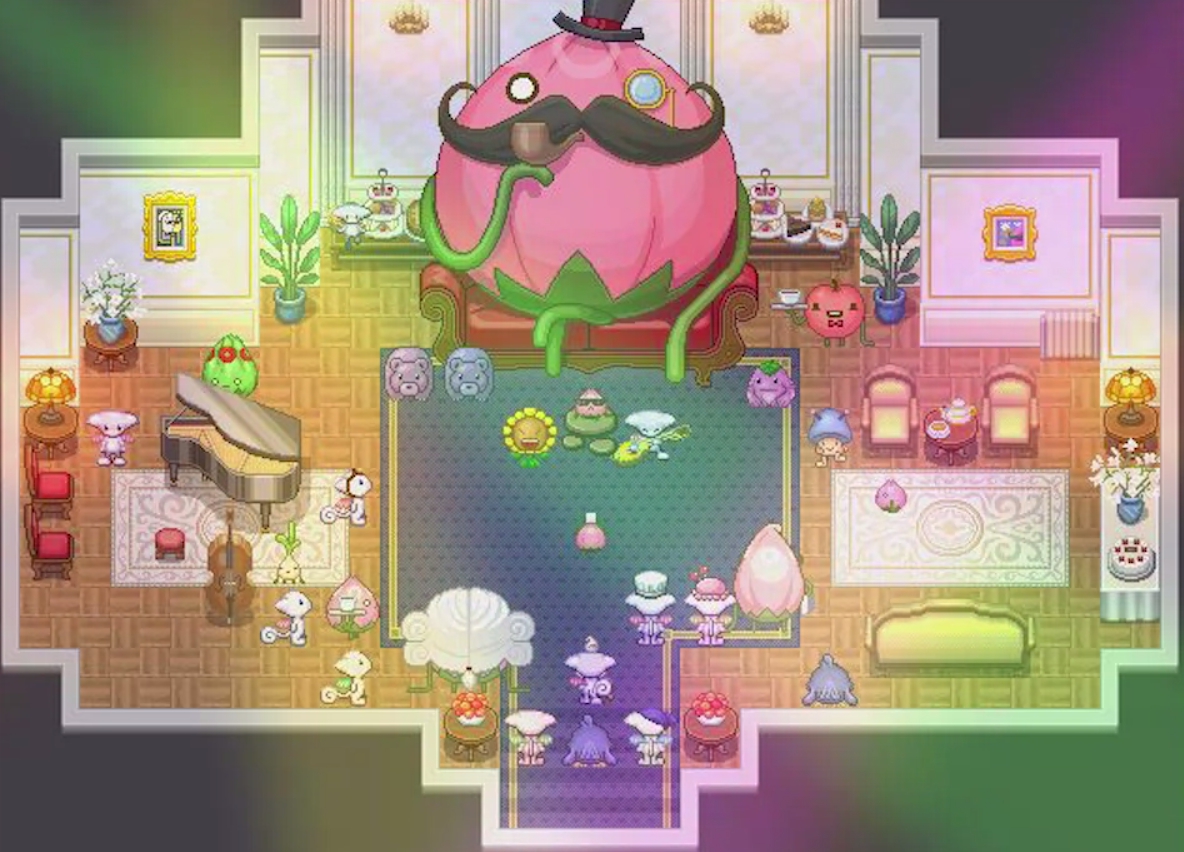 Okay, so here is where the RPGmaker style can falter a bit.  Here I am, playing this on a 4K TV and I have to Alt-Enter to get a fullscreen display stretched across my rather large screen.  Don’t go in expecting high rez visuals and animations. What you can expect are graphics pushed to the maximum possibility of colorscape and tone.  Also, the character drawings are very well done with some of the cutest visuals I’ve seen in a game of this type.  There is proper emotion conveyed by the images on the screen. When you see someone smile in-game, it literally makes you smile back.

I played this game entirely with my Steam controller. I’ll leave config on Steam for it, but basically just set arrow keys to your left joystick and assign Q to a button.  There are no difficult controls to manage and you’ll also be fine with keyboard and mouse. 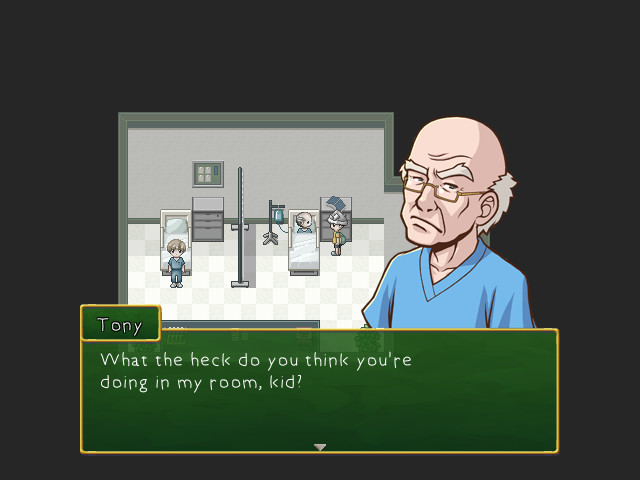 Rakuen is a prime example of composition done in perfect harmony with the game.  From the slow melody of the piano over the strings in the hospital to the uplifting and magical Leeble Village song with it’s tribal drum sections and basslines that take center stage over the open spaced keyboard notes, Rakuen’s soundtrack is the nexus of the game and I really feel without such focused music it would not be the complete package that is truly is.

Sound effects never confuse, but instead, indicate a change in progression or circumstance.  I never once felt like I was misinformed by sound or disturbed by the soundtrack.  I highly advise checking out the soundtrack available on Steam. 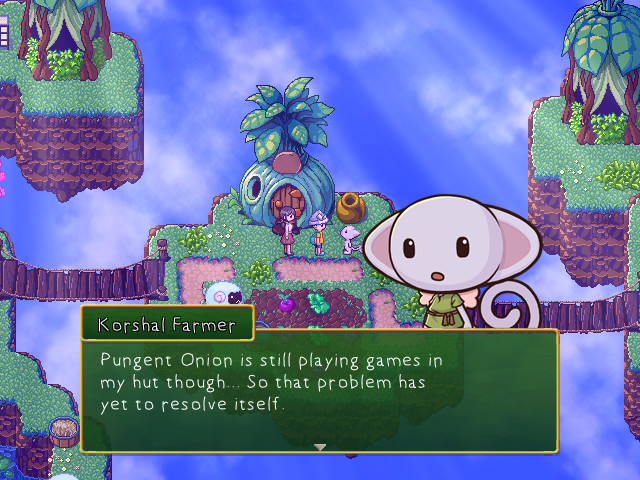 Ever have someone give you an origami figure that you unfold and discover a hidden story carefully tucked away inside?  That’s Rakuen, a small and compact game which reveals the most endearing game experience I’ve had all year.

Rakuen’s focus is about personal connections.  Each character has lost that connection and it is up to the Boy and his Mom to reassemble those bonds. It’s also about a tragedy, and I’ll warn players that they very well may cry during this game. I certainly did, but I’m prone to that because Rakuen hit a nerve with me.  When I was a little boy my sister had cancer and I remember those hospital rooms full of patients, each with their own personal stories of how they got there.   It’s not easy to manage through that and I’ve never seen it portrayed in a game through a mother and child point of view.  It’s unique and touching, making you feel like you are right there in the hospital with them.

Each scene is carefully constructed, with very close attention to the pacing and timing of select moments. My throat got dry. My eyes welled up. I have to admit, it can be hard to take as the game pulls punch after punch.  Yet, the journey is worth it.  Rakuen aims right at your feelings with no holds barred.  I’ve seldom come across a game that tackles real world tragic events and uses them as core components of a storytelling experience.  The pain you feel is entirely because these things can and do happen.  The fantasy of Rakuen took me to a place I certainly did not expect.  It connected me back to those difficult memories of the hospital that I purposely tried to forget.  I wasn’t sure how I’d feel at the end but I have to say, I am thankful.  My rating is an AutoSave, I encourage anyone who loves storytelling to purchase this game.