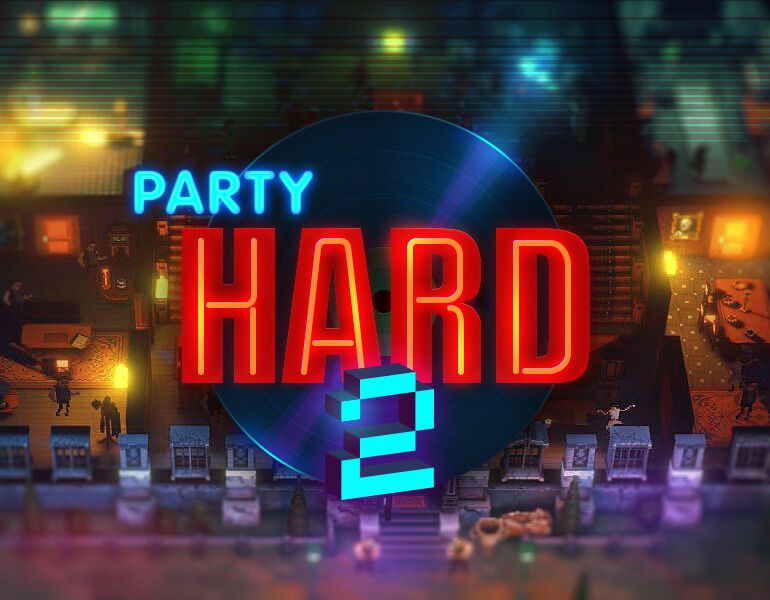 Step back into the shoes of a serial killer attempting to deprive the youth of their senseless fun.

I put on my mask, sharpened my knife, pushed earplugs into my ears and launched the alpha of Party Hard 2, a (light) strategy/stealth game about murdering people in a crowded environment and getting away with it. Not very moral, but truly satisfying.

Pre-purchase here if you are in a hurry to join the party.

I am surprised that the first Party Hard game did not create a controversy. After all, the point of the game was to perpetrate a relentless massacre in cold-blood. I guess it was protected by its pixel-art graphics and the vivid colors of the different locales where innocents were having the time of their life. That is, the last moments of their life considering that victory was achieved by cleaning the levels of all breathing individuals.

Any witness to the wrongdoings of the player or their consequences can call the police to investigate, which meant that the less people there were in the level, the less potential witnesses there were, and the easier it was. Killing around fifty people ended up being quite tedious, and despite the fun premise it was all a bit dry. 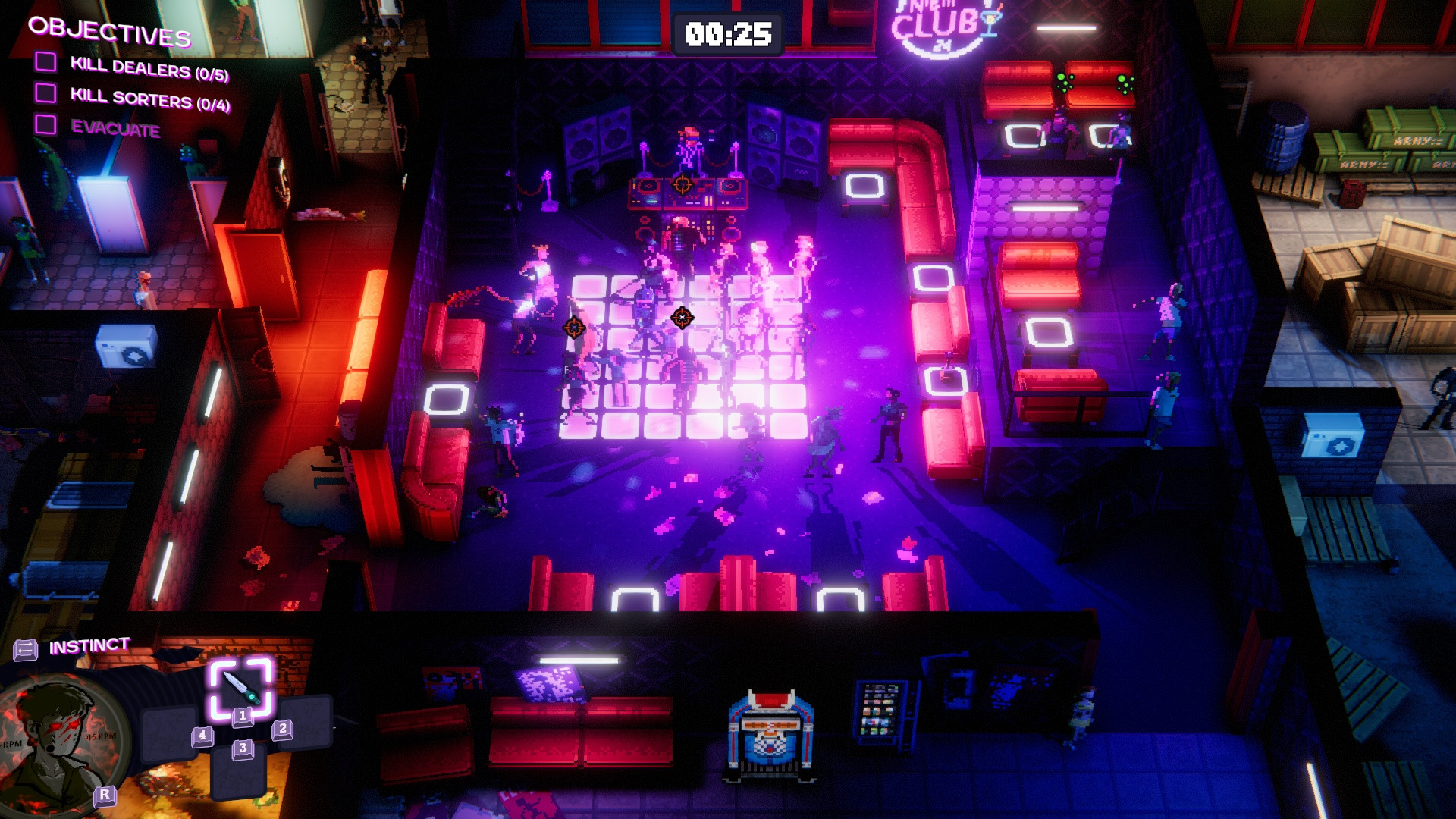 Party Hard 2 aims to fix that. Rather than a widespread massacre, there are about ten identified targets to kill which leads to a much more interesting dynamic and level design possibilities, while retaining the fun part of the game (the thrill of the first kills in a densily populated area). The new targets seem to be drug dealers or gang members, and thus we are straying a bit from the amoral premises of the first game. Thankfully, it is still possible to kill anyone on sight and there is nothing stopping the innocents from being punished for their decadent way of life. 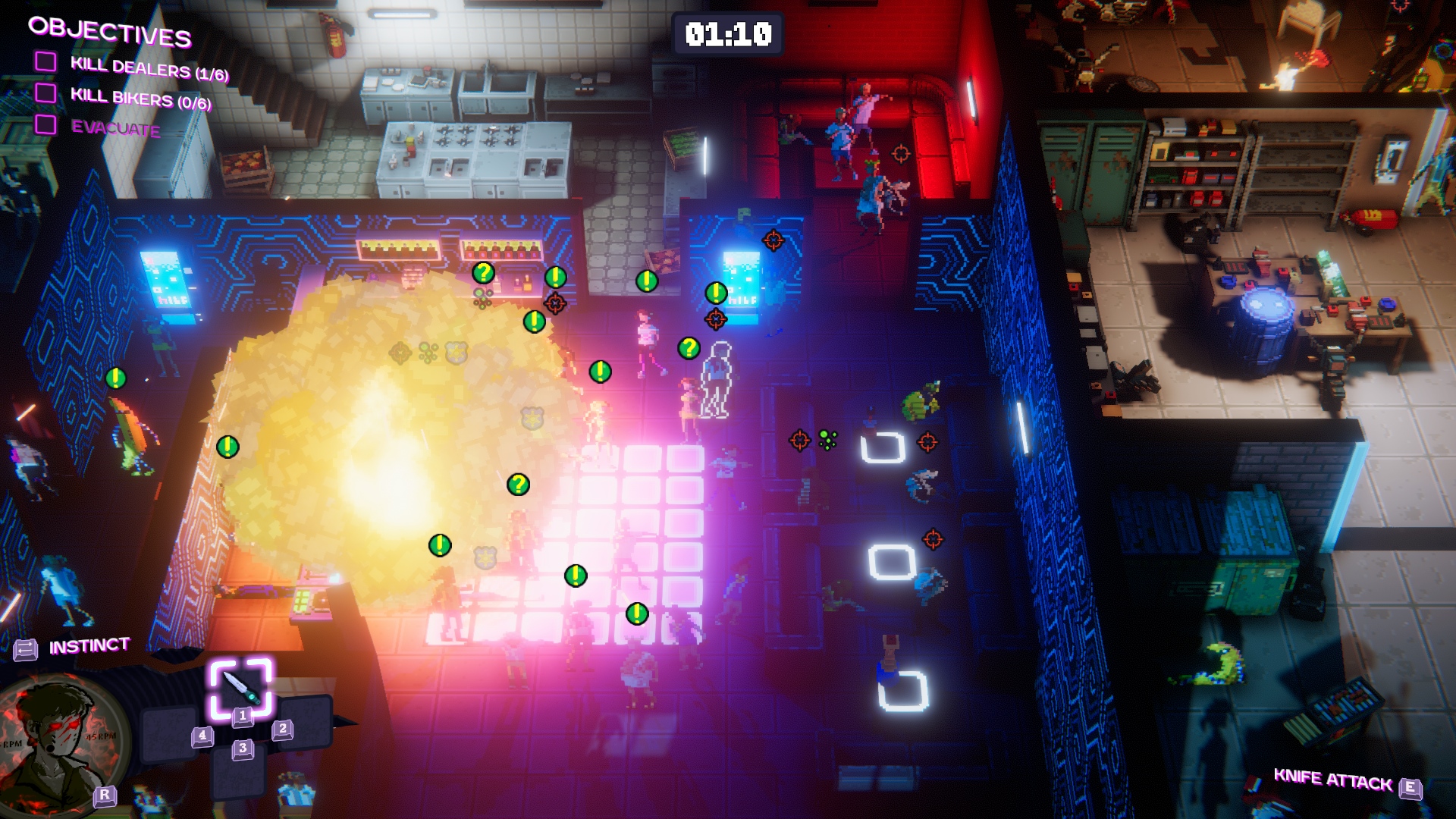 The developers also added an “ultimate” power to the player character, some sort of mental discharge killing anyone within a short radius. This power can slowly recharge over time, and is an interesting new tool to the player’s arsenal. I believe this is paving the way for having multiple killers with their very own unique power. On top of the trusted knife, the good old traps are still here (rig the sound system to cause an explosion), and there are also new items to pick up and choose where to set them (such as gas canisters). Finally, useless and indispensable there is a button to just dance. Perfect to fit in the crowd and enjoy the chaos that you have created. 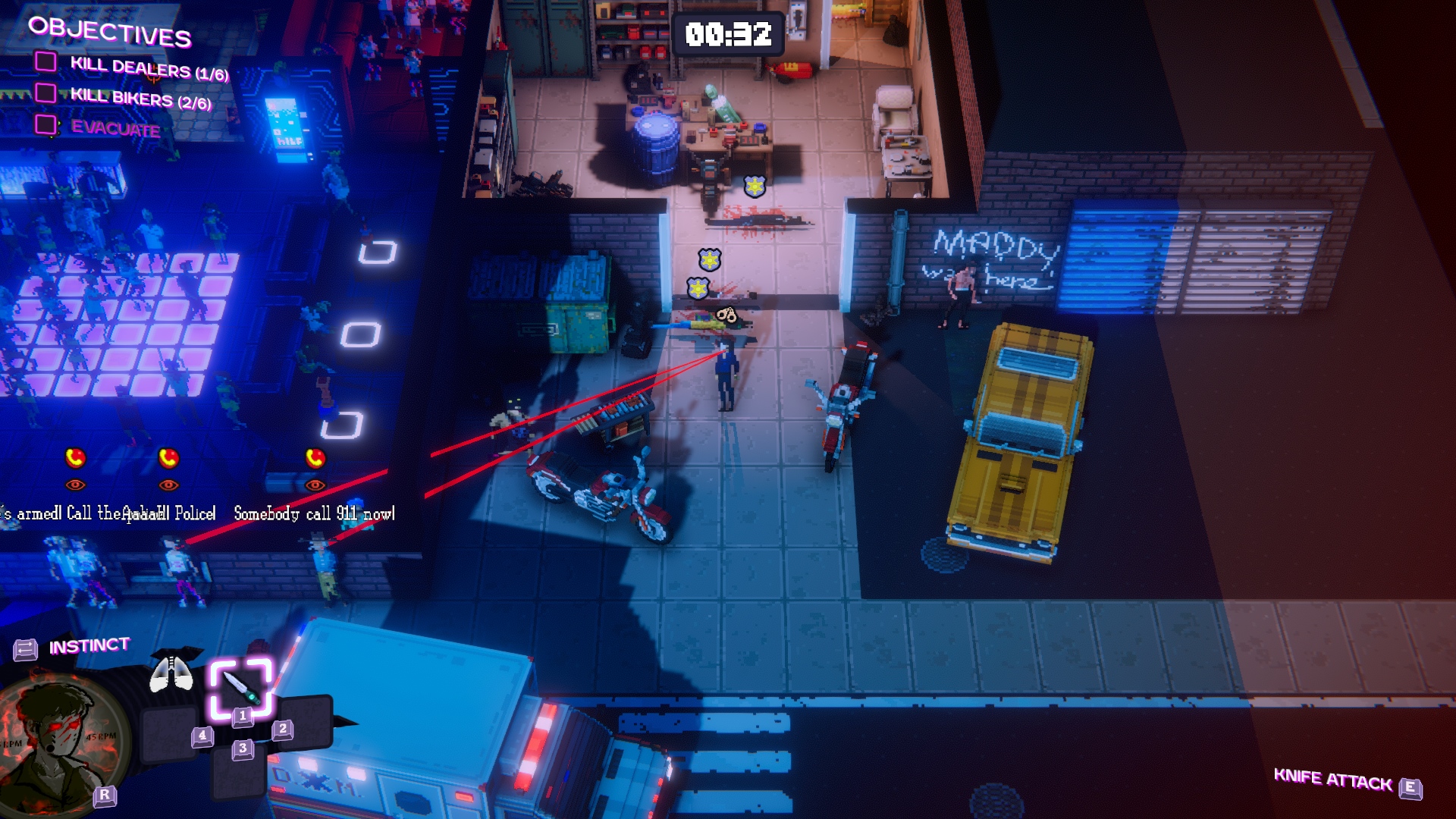 There are additional updates to the formula, such as an alternate vision mode to directly see what can be used and where the targets are. A line of sight appears when a witness notices something, making it more understandable to the player as to why they have been ratted out. And last but not least, the graphics have been updated to an interesting 2.5D style in which the backgrounds are 3D but the characters are still all cute sprites of pixels. While the sequel is not as striking as the original when looking at screenshots, in movements it works quite well especially with the various light effects. 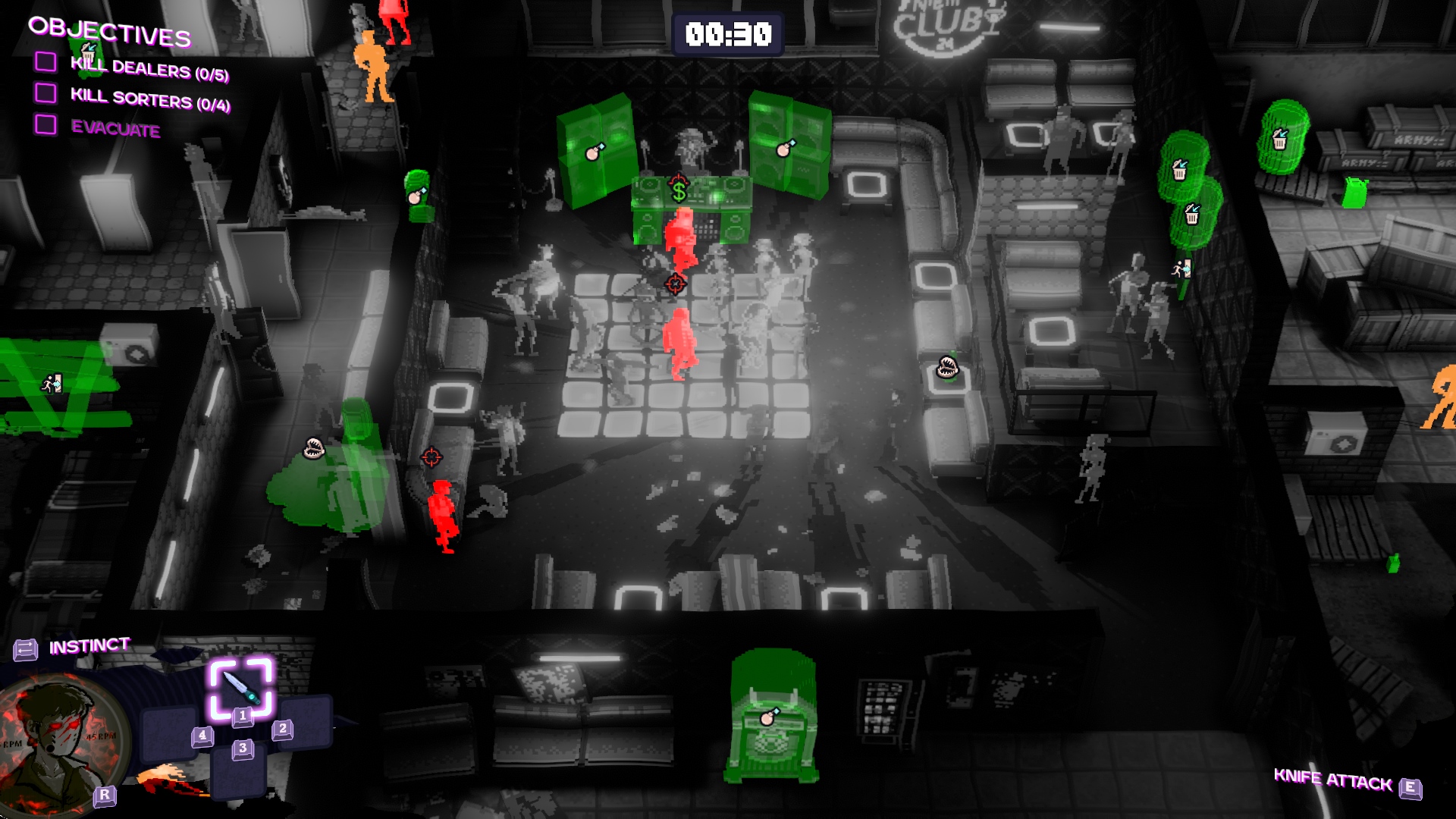 The game is still in alpha and it shows. So far there are only two levels, a nightclub next to a dodgy warehouse and a bar next to a biker garage. I found various tricks to avoid capture, such as laying down bodies to pick them up while I was getting arrested and one animation caused the other one to stop. 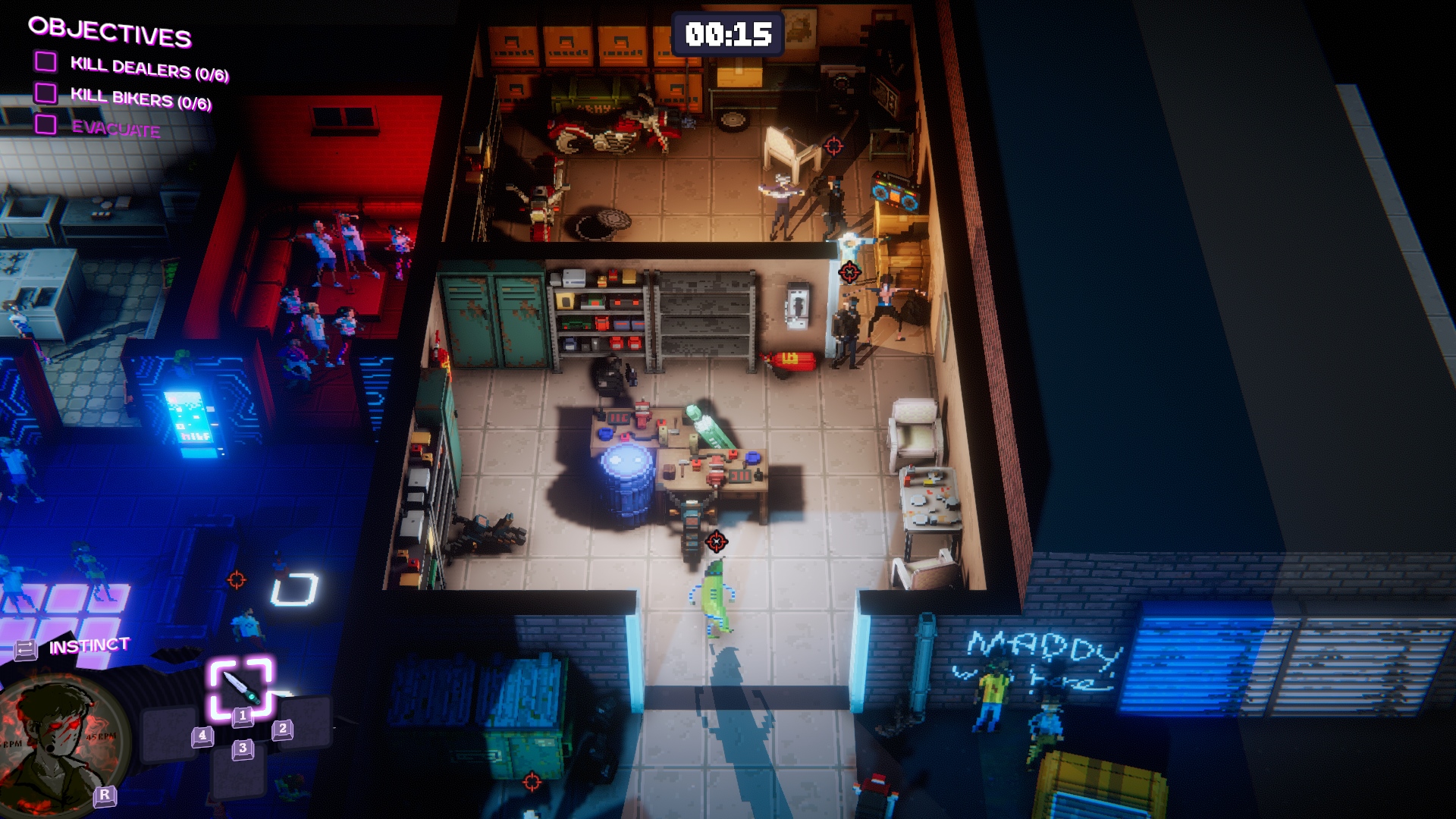 While the first Party Hard game did not really click with me, I must say that the sequel is shaping up to be a much more enjoyable game. More fun possibilities and less of a tedious drag, being a psychopathic murderer feels fresh again. I also really like this uncommon art style. Definitely a promising game to keep an eye on!