Housemarque is guilty of only one crime in releasing Nex Machina for the PC. They haven’t released the equally brilliant Resogun, that needs correcting.

A top down arena shooter that not only builds upon the greats but brings with it the unique Housemarque style and excellence that made Resogun such a hit.

Oh boy.  There’s a certain childish glee I get when it comes to two types of games. The amazingly bad, because I can rip on them with a wide range of interesting words and expletives, and the amazingly good because I get to foam gushingly over a game I genuinely appreciate.

Nex Machina falls into the latter category. At the core is a top-down twin-stick, your job is simple, kill everything not you. In the same vein as say, Assault Android Cactus, and Ion Assault, you’re given an arena and said arena is populated with a wide variety of things most of which have a pretty singular goal, that being your immediate demise. In Nex Machina, I use the term most because as much as this is a solid, old-fashioned twin-stick, it’s also an equally old fashioned and slick score attack game, and that means not just killing everything quickly, it also means saving humans. Fragile, lemminglike humans, outlined in green. These humans can and will die without your assistance. Big, nasty droids will lumber over, lean over to give them a big friendly hug and proceed to squeeze the very life out of them, and these said same humans are often positioned in such a way that you will have to move fast, take risks, or optimise your enemy kill route to ensure they do not die. 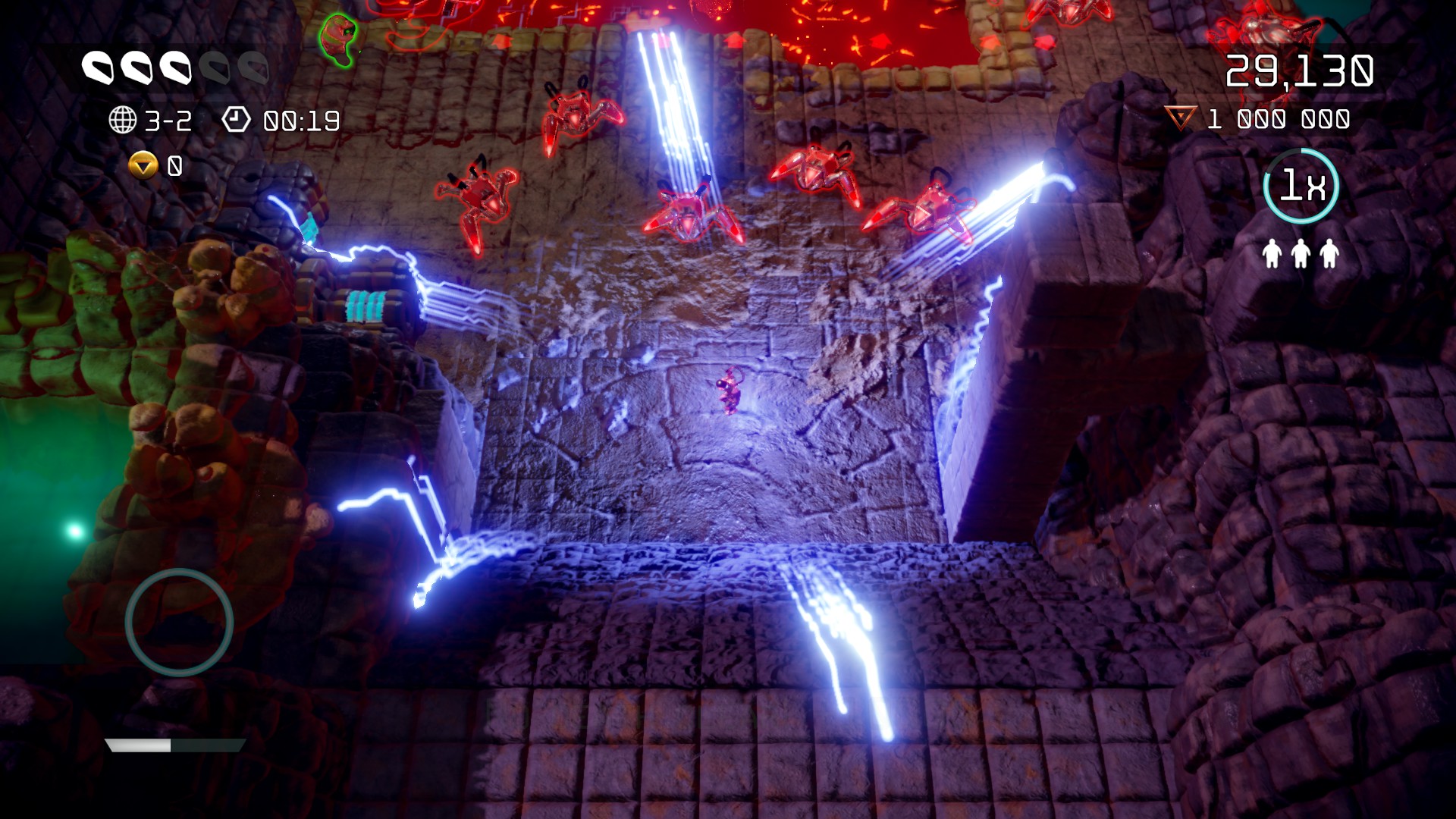 This game is drenched in a neon-80’s inspired almost cyberpunk feel at times as you use weapons which whilst their title might be technically valid, the results are scorched in bright colours and fizz with an energy that takes the entire experience and makes it feel like you’re fighting on a disco floor made of death and robots. Very much like Assault Android Cactus, except this takes cues from Hotline Miami with single hit deaths (unless you have a shield) and most enemies being scorched in single shots, this is all about speed, good positioning and good reactions to what is developing on screen. Initially, it starts simple, single hit crablike robots scamper toward you, homing in and charging with swarm like simplicity.

That simplicity is quickly thrown out of the window when you start dealing with the “Human Compaction Robots” as you’ll see in the video below, they don’t chase you, they chase those green outlined humans, and this is where the score attack element kicks in. See, it’s eminently possible to play the game safely but by letting the humans die you crater your score multiplier and your final level score will be terrible. Saving the humans requires risk, but rewards you with score, and with progress to improving that multiplier, and here’s the real twist, unlike most combo based games, your score multiplier doesn’t degrade unless you die or you let humans die. So the impetus on you is to ensure at the very least you’re scoring one for the good guys more often than not.

What you see in the first world video is merely the appetizer, things pick up fast once you enter the ice world, with turreted droids spewing spray shots at you and projectile-based enemies rapidly becoming the norm, meaning on top of physically avoiding the enemies you’ll have to start dealing with bullet-hell type patterns of purple orbs that can be shot, sprayed or even laid down as mines to ward off certain sections of the screen. Laser barriers will force you to burn your precious dash charges getting around the map, artillery will prevent you from staying in one place overlong. The very best games of this type let you get comfortable with the “language” of the game, the ruleset, and then just as you think you’ve got all the rules in your head, they add something new. Nex Machina hones this to a science. Just in case the worlds themselves didn’t pose enough of a challenge, there’s also the real meat of the game.

Arena mode is where you take everything you’ve learned playing the campaign or the single worlds as practice, and challenges you to play with excellence. Losing lives suddenly becomes a steep penalty, losing humans actually stings, seeing your score multiplier drop causes your heart to sink because you know it could be the difference between a silver or a gold award for the level, and more critically, Arena is where you earn the in-game currency for the customizations. If you want to stand out from the crowd, Arena is the forge from which your avatar is created and painted, and those who master the intricacies of the game will be richly rewarded. This is a game where whilst the core is stellar enough, the Arena mode is what will keep dedicated fans coming back on a regular basis, trying to improve their score, to earn more currency, to rack up those medals. 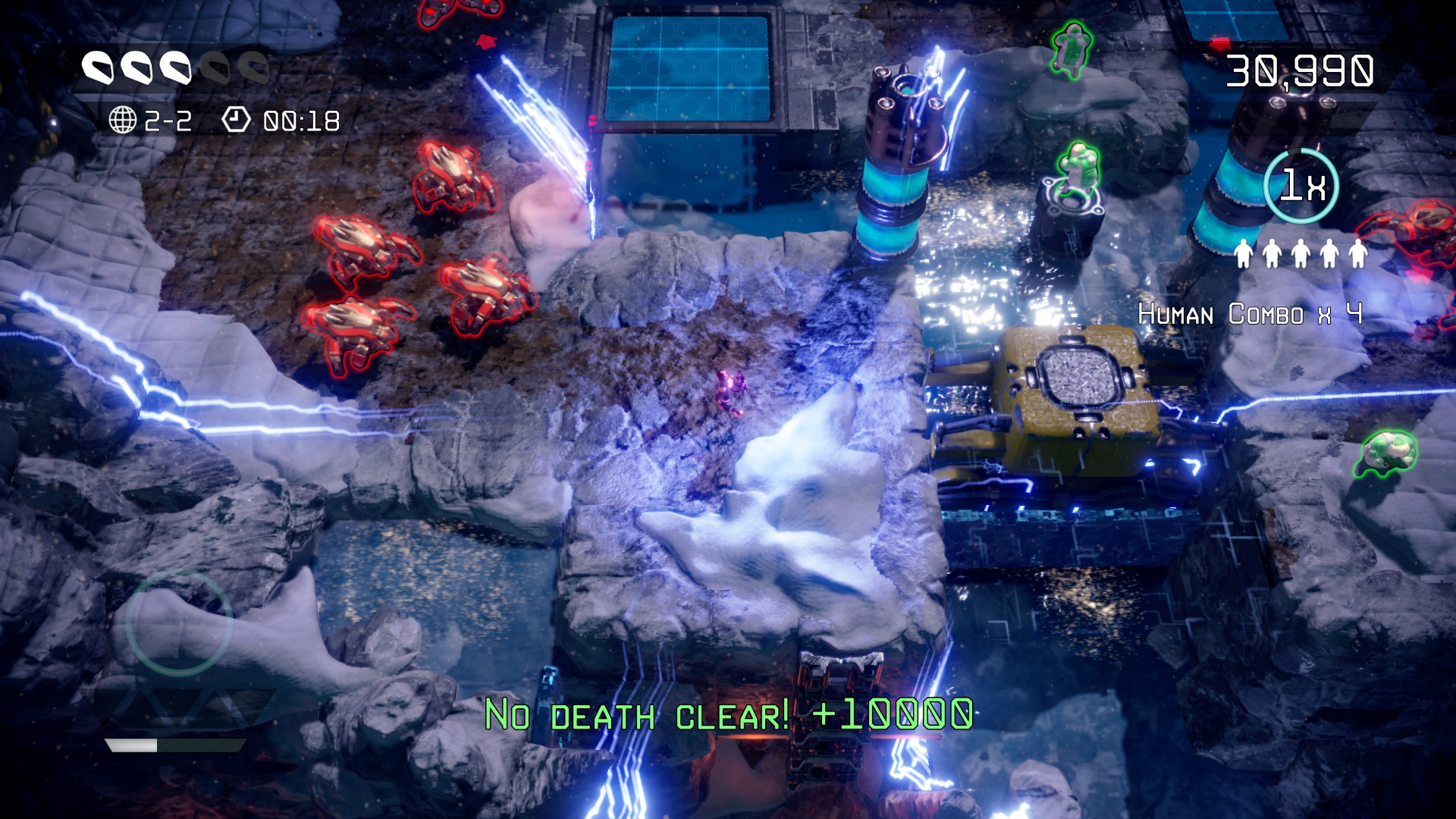 The Housemarque stamp of visual and audial quality shines through…

Anyone who’s played or watched videos of Resogun will know that Housemarque knows their design intimately, and Nex Machina is no exception, the music is a synth-wave gem that straddles neatly between the current day and cheesy 80’s throwback, the visuals are both straightforward to parse (threats are easy to pick out and you never lose sight of what’s going on) and at the same time both stylish and slick. More critically this game scales well across system specs and holds at a reliable sixty frames per second even on modest hardware, anything within the last five years with a half decent graphics card and you should be more than set for what is to come. That said, I would strongly advise a controller for this, yes you can probably get away with a mouse and keyboard but honestly? It’s a twin-stick, use the controller, it makes life easier.

Some games are the kind where you sort of know even before installing that you’re in for a treat. This was one of them. Even when my other reviews are done and dusted, I’ll be playing this game long after, because it’s the kind of game that ate all my money in the arcades.

Now I want Housemarque to release Resogun for the PC. Yesterday.