The word ‘Lovecraft’ is bandied around Steam as a selling point constantly – it’s so common that it has its own tag. Few games live up to their claims in this regard, but here we have one that most certainly does. You play in first-person as Dr. Frank Gilman, who wakes up with amnesia in an Antarctic science compound and embarks on the usual journey of discovery, collecting items to allow you to solve puzzles and minigames, and open entrances to new areas, interspersed with cutscenes and voice dialogs.

So there you have a short outline of the game and there’s not much more to tell because if you’ve played any other game in this genre then you already know how this works. The quality of games like this relies not on breaking the 4th wall or trying to introduce weird and wonderful mechanics, but by how well each element of the basic formula is executed. 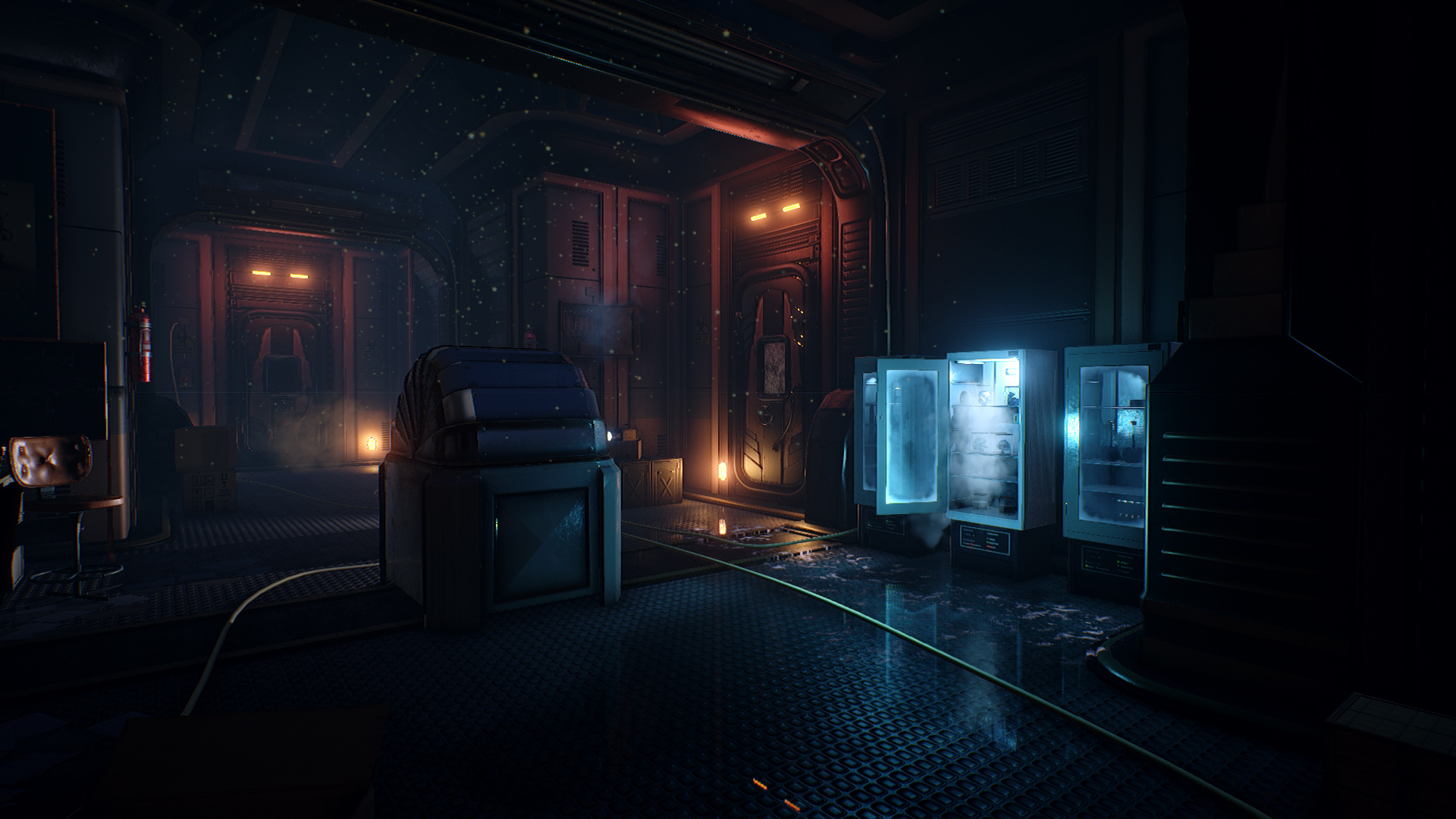 I’m notoriously fickle when it comes to stories and dialog in games. They rarely interest me and I have a hair-trigger attitude to the skip button. This game was a rare exception. I think the overall atmosphere helped it along, but the writing itself kept me engaged and paying attention to what was going on. Skip was never used. The story is a sequel to an actual Lovecraft novel so I think the writer(s) have proper knowledge of the material, unlike 90% of the other game devs out there. 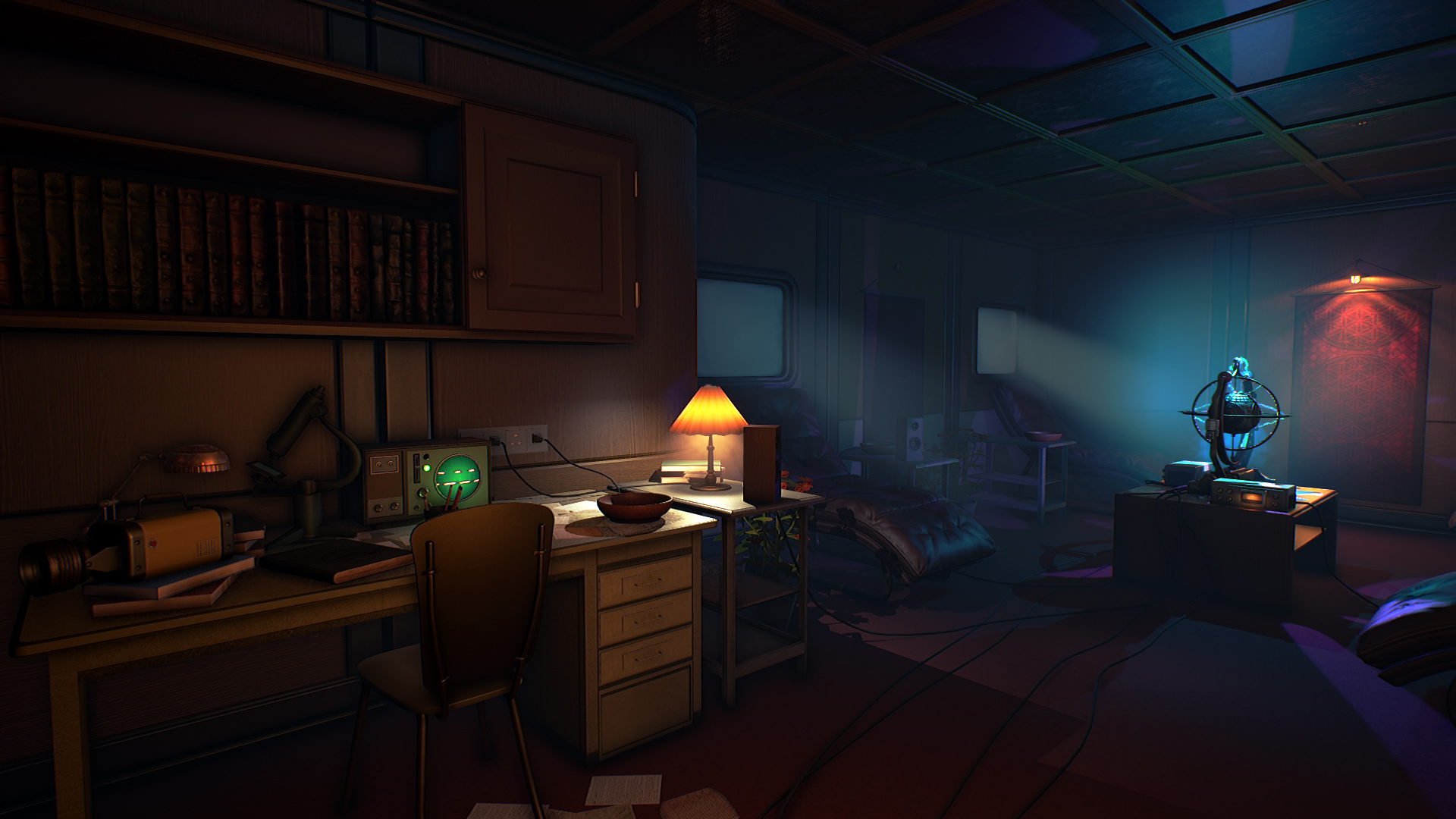 I haven’t been exposed to many UE4 games and graphics are not generally my main attraction to games. Cheapo minimalistic puzzlers are more my thing, so to my virgin eyes these graphics are jaw-droppingly stunning. I mean just WOW! Those intricate ancient masks turning around in mid-air with the light glistening off them are images that will stay with me for a while. If they made a DLC with more of those I’d buy it.

There is the obligatory torch/flashlight in this game. However, unlike many other horror titles where you’re permanently wandering around with forced tunnel-vision, wasting half of your screen space in a lame attempt to make it “scary”, here the torch is optional. In 90% of areas the ambiance is low-light but you can see things well without the torch, given extra guidance by subtle blue crystals marking the pathways. With that said, I did use the torch a lot just to see the beautiful lighting shimmering over the already-gorgeous objects throughout the game. Did I mention that I’m in love with these graphics?

Background piano music is used sparingly in the game, but it comes at appropriate times to enhance certain events. Most of the time you’re listening to excellent sound effects that complement the graphics to achieve full immersion in the game.

Cutscenes with voice acting come at regular intervals and there’s always something interesting happening. It would be nice to have the option to disable the subtitles because the text kept reminding me that I was in a video game, spoiling the immersion a little.

One specific thing I want to mention is the smashing of walls with an axe. I could do that all day, it’s brilliant. The rock graphics/sounds and the physics are so good that it looks totally lifelike and you have to keep pummelling it just like you would for real. You only have to make a hole to climb through, but I always whack every last bit because it’s so much fun. 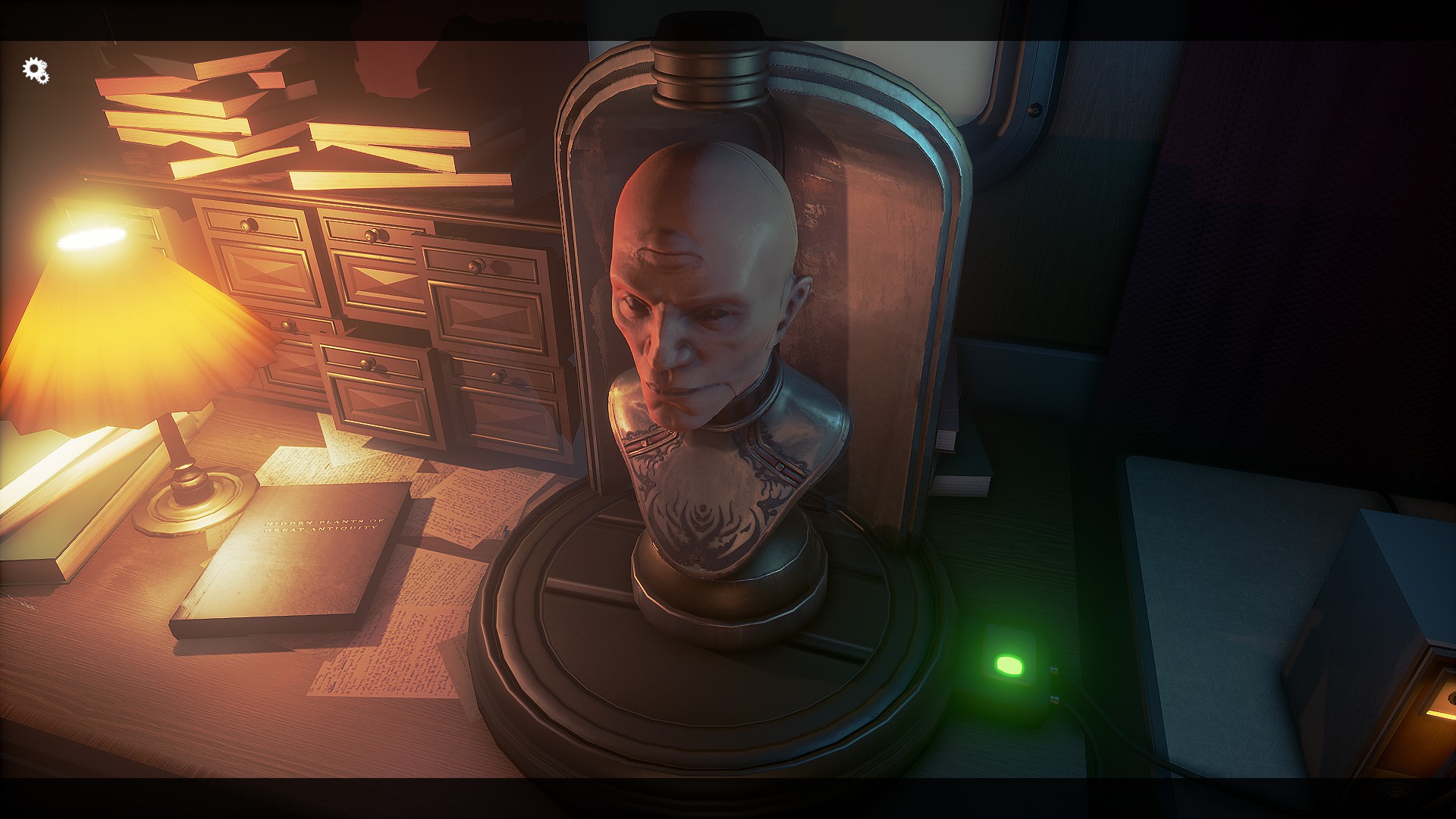 There’s nothing unusual about the puzzle types, it’s all been seen before, but they are nicely done, entertaining and of course, like everything else in the game, the graphics make them dazzle. I think there’s just the right amount of them, enough to provide a nice break from exploration but not too many to delay progress.

Part of the journey involves navigating a submarine three-dimensionally through underwater tunnels and crevices. For me this was another memorable highlight of the game, with the inertia of the vessel set up perfectly to make it slightly challenging while still feeling in control. 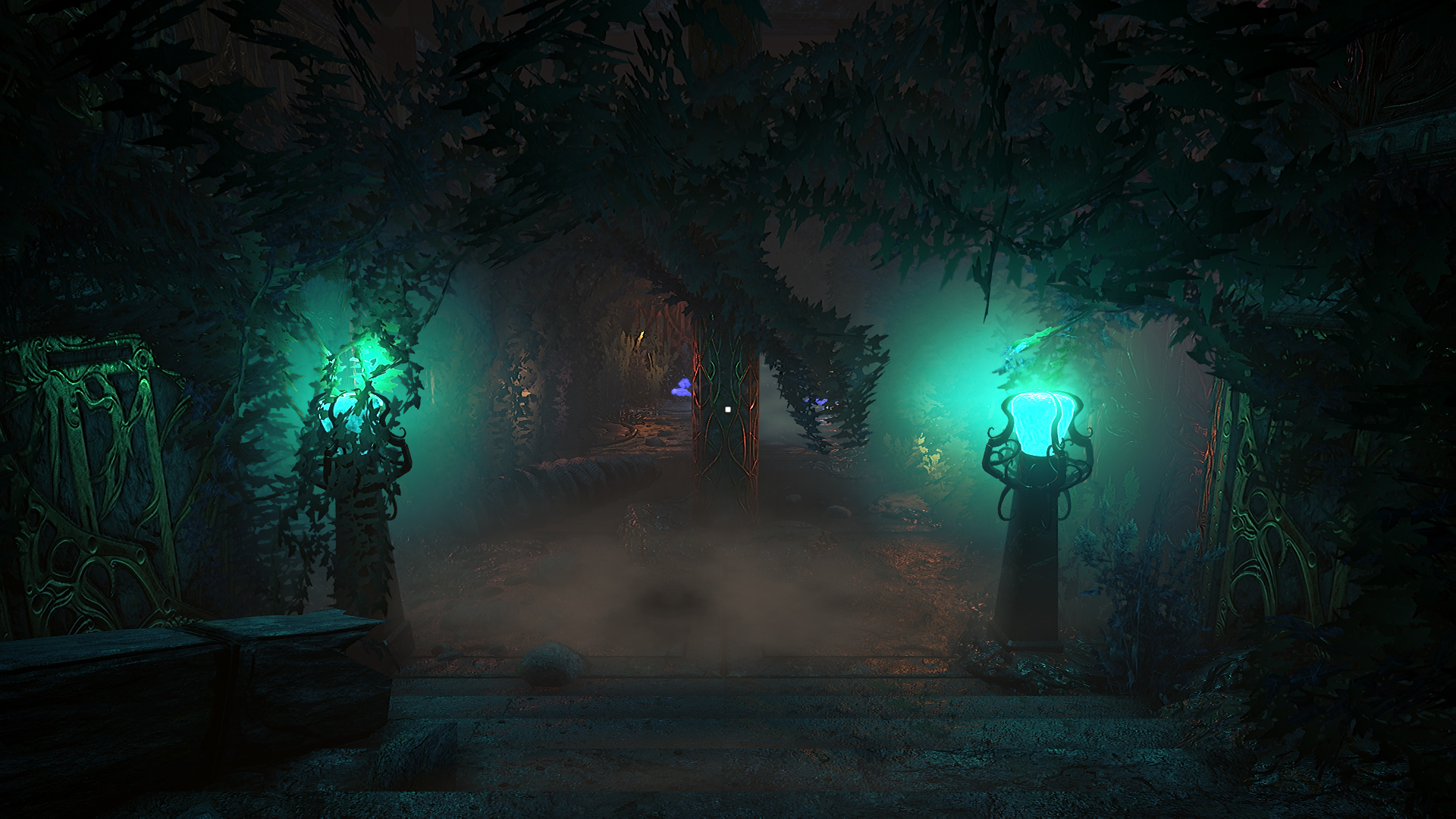 I played with a Steam controller and it was made for games like this. The ever-so-light brush of my right thumb to effortlessly look around me with pinpoint accuracy while smoothly moving with the left. Anyone looking over my shoulder would see me showing off by circling around objects without taking my (virtual) eyes off them. The game makes use of all the buttons for the familiar actions of inventory, interaction, equipping etc and there are no annoying quirks. I had a go with mouse/keyboard and that was also very good.

I had to check walkthroughs once or twice but only out of laziness/impatience. The game is generally easy/medium difficulty and most people should be able to get through it without any help – clearly defined clues are always provided via journal entries, wall inscriptions and suchlike. This is not a brain teaser by any means. The puzzles are interesting and good looking rather than challenging. The hidden-object aspect is also comfortable, the indicators light up easily and the areas that need to be searched are not huge. There’s no frustration here.

5 trading cards (the perfect number, of course), achievements and Steam Cloud (which I will use for my dual-booting when they add Linux). 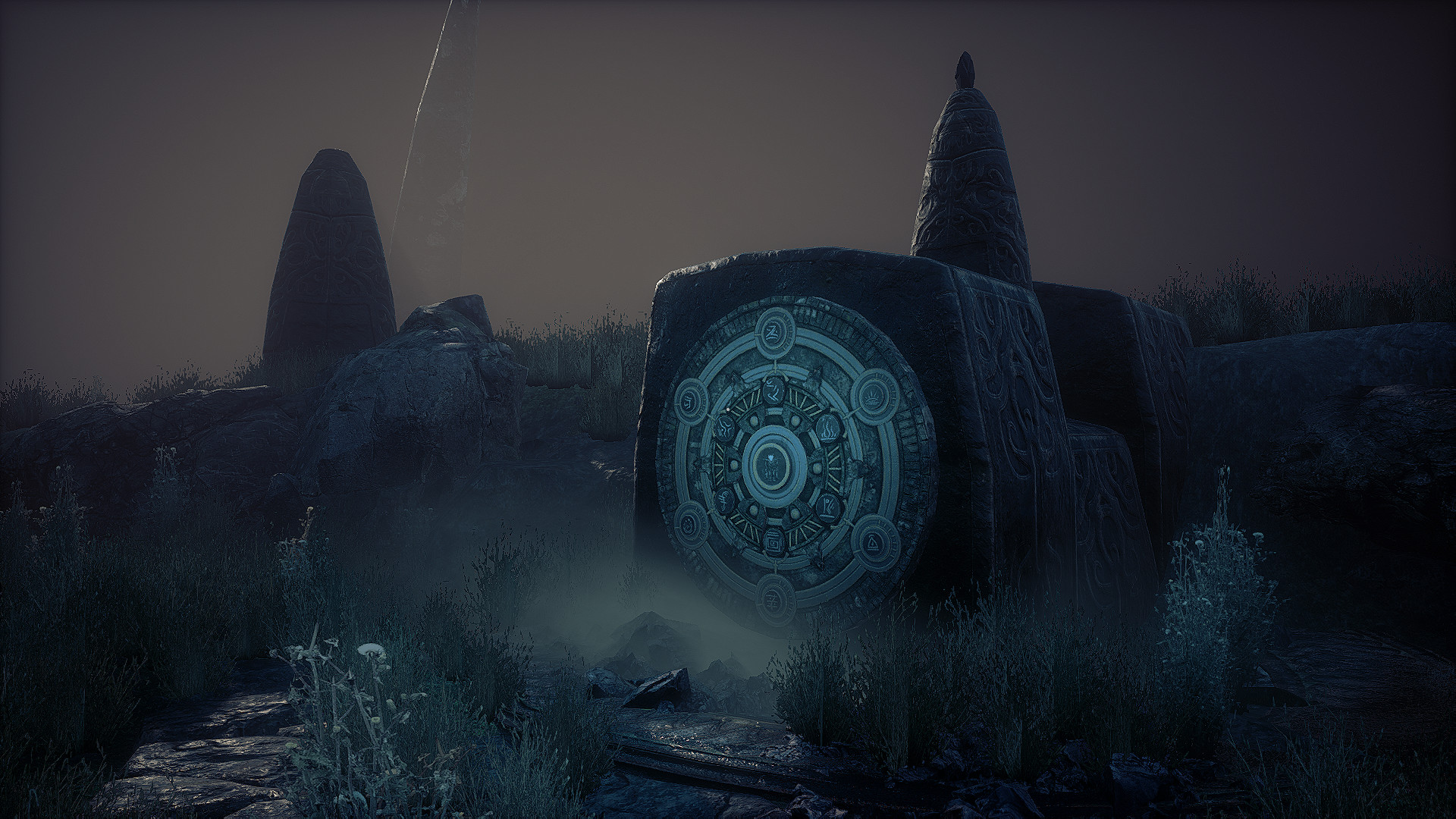 I took 10 hours for my first leisurely playthrough, including a lot of lingering to admire objects, idling while making coffee etc. For me it was just the right length. There’s a 2nd ending and about half of the achievements are for collecting all the stuff, so plenty of replay value. You get a list of stats at the end of the game and it turned out that I only collected 60% – and I thought I was being thorough – so it looks like there are a lot of devious hidey holes still to find. I look forward to that. So anyway, yes, buy this at full price and you won’t regret it.

It all looks and sounds so real. The fluid movements feel more natural than any other game I’ve played before, it’s jam-packed with eye candy and the whole experience was a treat. Needless to say, I thoroughly recommend this.

The only fly in the ointment is the lack of Linux support, the game would be perfect if I didn’t have to boot that other horrid OS play it. The devs have said Linux is on the cards though, so I look forward to that day when I will savour my 2nd playthrough to get the other ending and remaining achievements.