Badass Hero is a roguelite platformer set in a comic book universe, packed with a procedural generation of levels. While simple, roguelite fans will find it addictive.

In Badass Hero, the main character is a comic story hero in a procedurally generated universe of comics. The Hero does not follow a straight questline but jumps from multiple comic books, each one of them featuring its own bosses, narration, items and enemies. As players progress through the comic book, the difficulty increases, and they eventually land in a boss level. The game is, overall, very simple. Players receive ink for killing enemies, which is the game’s equivalent of experience points. Ink can be used to upgrade your Hero with multiple perks and skills after it’s death, or, during the playthrough as there are some special points on the map that allow for purchases using Ink points. Those purchases are mostly weaponry but may include temporary boosts, armor and special grenades.

Badass Hero does a great job making the player feel like a badass, indeed! Jumping quickly from wall to wall killing enemies in never-ending combos of glory will surely please roguelite and old school fans alike for it’s simple but addictive gameplay. 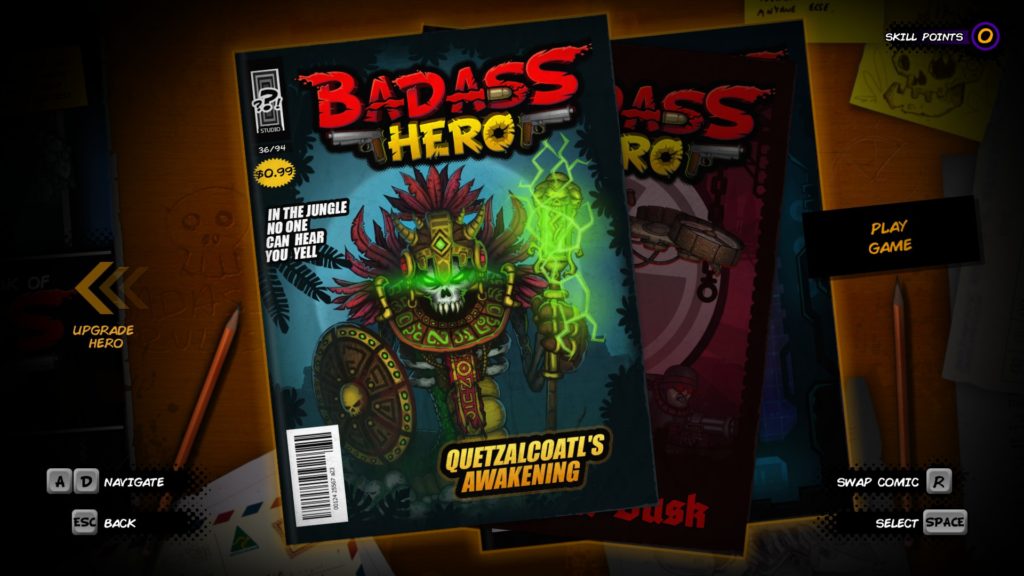 Tell me about the gameplay!

After deploying into a comic book (apparently, there are only two right now), it is possible to enter new areas by running into the corners of the screen with blue auras, where fighting, looting and “pwning” begins! Players need to keep an eye on themselves and focus, otherwise, they will die very quickly as enemies deal significant damage, and health packs are very scarce, increasing its difficulty. Each new area features enemies that may be in patrol mode or just standby.  They move spiky circles and spikes on the floor that make it difficult to progress into new areas, but possible to circumvent using the strafe button.  This is basically a boost towards a certain direction that helps to go over obstacles or long distances floored with spiky traps.

The gameplay is very dynamic, allowing players to strafe swiftly through an area using the 360° firing to dispatch enemies quickly, accumulating kills into combos. Combos are probably the most important part of the combat in-game, as combos give temporary but significant boosts such as faster reloading, ammo, HP recovery, et cetera. Those special boosts make ink gathering even easier, and, as ink is crucial to progress further and beat bosses, the use of combos is heavily recommended.  Gamers should seriously focus if they wish to pass through an area quickly.

As one may guess, unlocking the diverse in-game armory of perks, skills and boosts is indeed a very addictive task, albeit repetitive. The game does not break any new ground or create significant new mechanics other than the context of a badass hero who beats down ugly monsters and progresses into new comic books and stories. The addictiveness is likely correlated with it’s enjoyable and rewarding simplicity.   As mentioned before, strafing and mowing down enemies area after area is lots of fun, but nothing new in the action platformer genre. 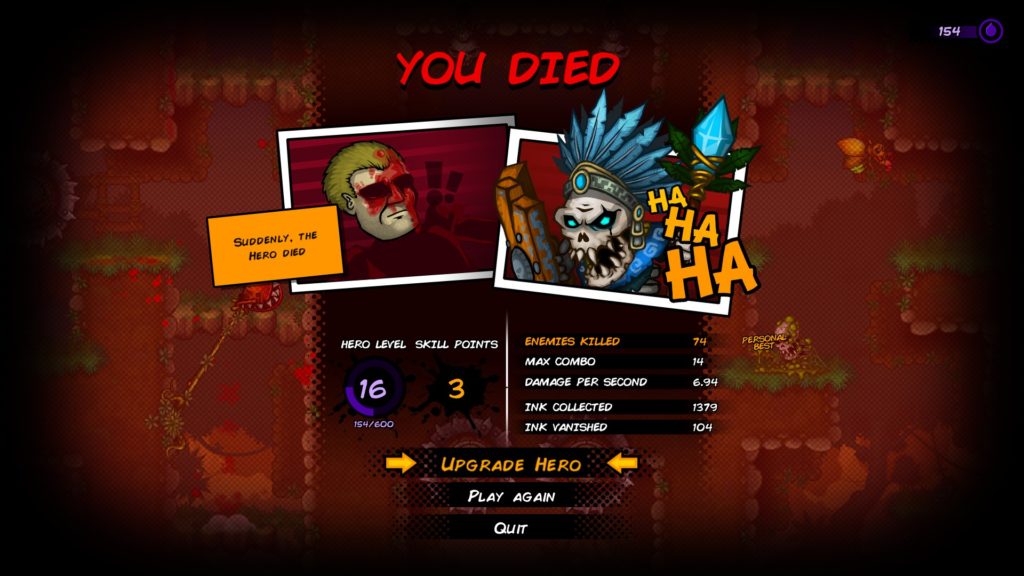 Is it worth it?

For a fan of the genre, it is surely a good pick! The procedural generation allows for multiple replays, keeping the game fun for those looking for a rogue-lite action platformer. Although the $9.99 USD price might be a bit too high for some, those looking specifically for something like Badass Hero will find it a good purchase.

If not exactly a fan of the genre, it is wise to wait for a sale, perhaps $4 or $5 would do given it’s current amount of content and overall simplicity (not many customization options for perks, mostly “speed upgrades” / “reloading speed upgrades” / “health upgrades” and other common perks). 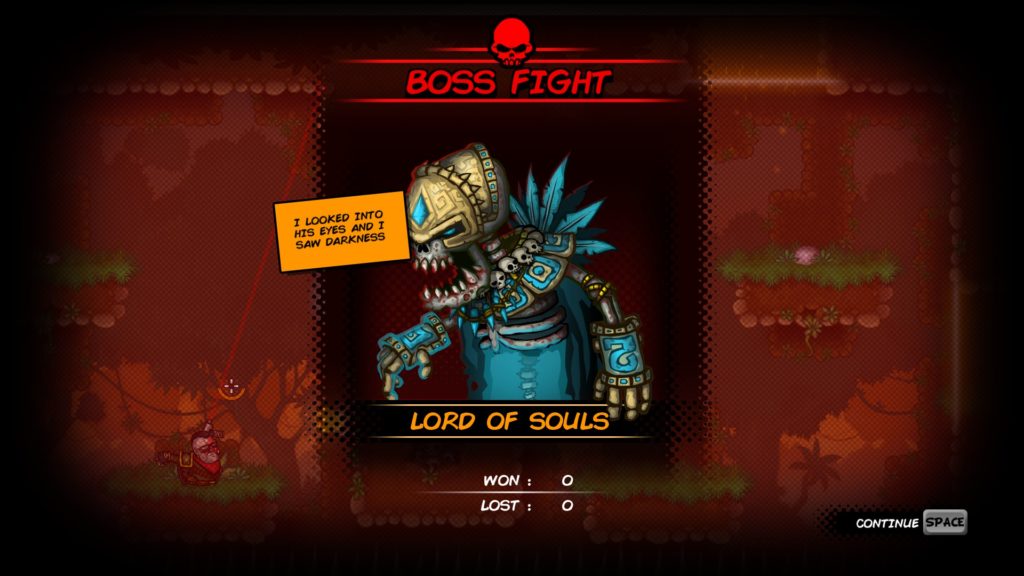 Badass Hero is a nice, albeit somewhat simplistic, platformer that is sure to please those looking for an addictive roguelite treat. I believe it would be fair to note that I am not easily a fan of rogue-lite games, as I prefer easier games that are more story-focused. If I would purchase it for myself? No. I wouldn’t! I’d rather pick something closer to my tastes, but for players that actually enjoy this sort of gameplay, where lore is given up for the sake of dynamic gameplay and overall playability, I’d recommend it.

Badass Hero gets a “Save for Later” rating as it does not break any ground for the genre, and is a better deal on a sale. An entertaining game, but nothing incredibly special, I’d say.