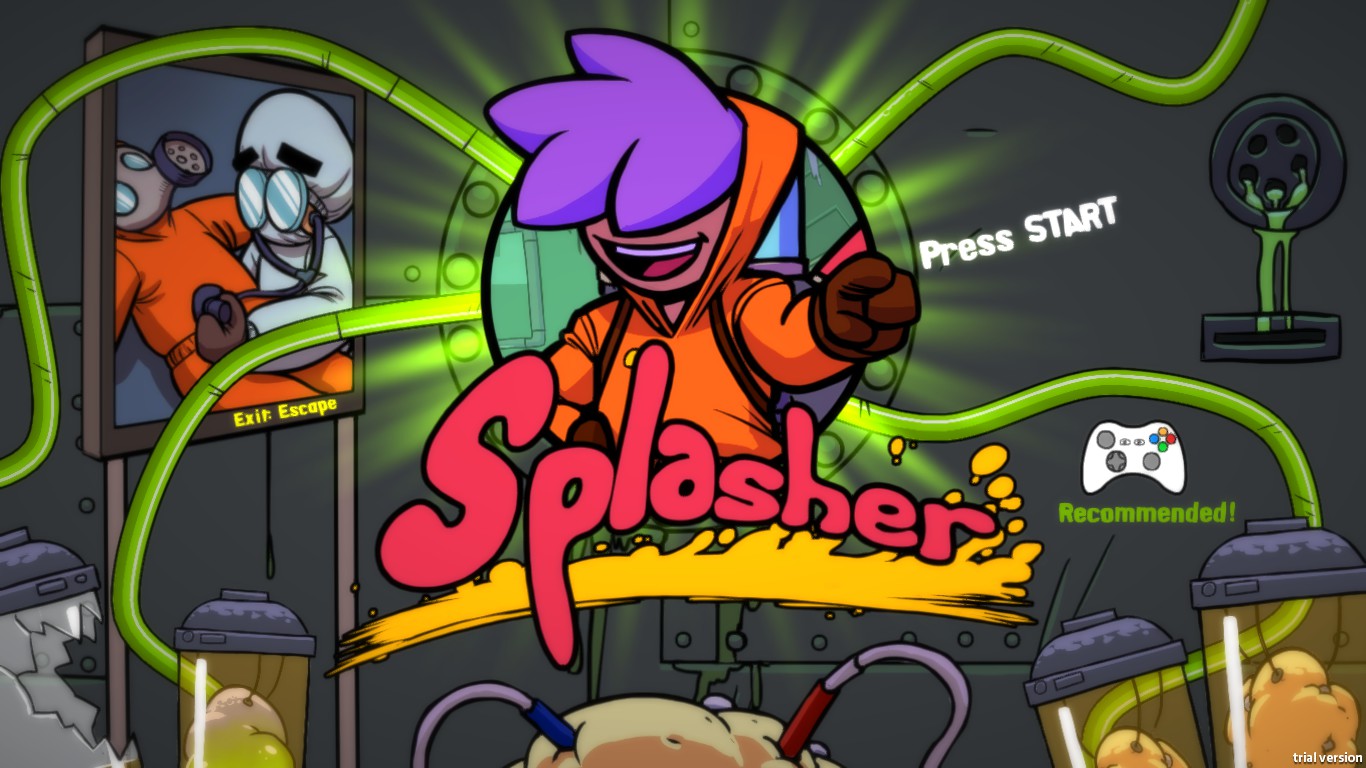 Gameplay Video With Commentary by JimDeadlock

Platforming games are perhaps the most common genre out there, even before the rise of Steam and being able to grab a bunch of them for less than twenty bucks in a sale. But they’re also perhaps the hardest to do well at. There’s really no getting around making the gameplay of one good, and failing to do that is practically the kiss of death. While Splasher doesn’t reinvent the wheel, it does provide a very enjoyable experience.

PUBLISHER: THE SIDECKICKS, PLUG IN DIGITAL

The story takes place in a massive paint factory, Inkorp, whose owner has suddenly revealed himself as a mad scientist, kidnapping workers and experimenting on them, as well as using an army of killer robots to do the task. You know, as you do. As the only unique-looking worker in the bunch you have to put a stop to that using a gun that can fire water, and later on a few different kinds of paint. Red lets you walk up walls and on the ceiling, while yellow bounces you around. Your water gun is used to flip switches and defeat enemies, aside from some moments where you’re locked in combat as a bit of an afterthought, thanks to some liberal auto-aim on the game’s part. That isn’t to say enemies aren’t dangerous though, as even the ones not trying to kill you directly can still cause your death by washing away the paint you’re using to get around. Thus far they’re placed fairly, to make the levels harder but still doable.

In each level of the game you’ll find seven workers in peril that you can rescue that spell out Splash! Six are strewn about the level behind some tough jumps or puzzle rooms, and the final one is at the end, locked in a cage you’ll need to have enough energy from the stage to unlock. You get that by destroying enemies and washing off special glowing patches of paint. This set-up reminded me a lot of Donkey Kong, particularly the newer games by Retro, as well as the newer Rayman titles. The latter thought turned out to be quite appropriate, as three of the game’s staff are Romaine Claude, Richard Vatinel and Aymeric Schwartz, the level designer, art director, and composer for Origins respectively. I can safely say all their talent is not wasted on the game.

Each level I’ve played – about six of the twenty-two the game seems to have – has been well-crafted, and built around speed. Apparently Splashy was made through a collaboration with speedrunners, and I can see why. If everything lined up perfectly, you’d be able to get through levels quite fast.

The levels themselves are also a treat to look at as well as play. Factory levels in games tend to be really dingy, dark places, but owing to it manufacturing paint the one in Splasher is very colorful and almost feels alive. Water spouts up from pipes to propel you upward, turrets paint the walls and ceiling automatically – even things that kill you are very comfortable. You die in one hit, but so far I haven’t felt any real frustration. The music is also very nice, being jazzy and upbeat. About the only knock I can think of to the game is that it’s one of those games that takes it for granted you’re playing with a controller. All the prompts are for one, and you can’t change keyboard controls, which are WADS for movement and IJKL for shooting water and paint. Obviously not everyone plays games like this on a keyboard and that’s fine, but it is something to be aware of. I’d say it’s perfectly playable on keyboard, though, aside from jumping over saws while wall-running, which I found a bit awkward.

Another thing that might be a flaw is that advancing through levels is gated off by you rescuing the workers in levels, so it’s not entirely an optional goal. So far it’s not too strict, but if you’d just prefer to blaze through levels it could be a flaw. Some of them did take me a few tries to rescue.

Overall, if you’re looking for a well-done, if not exactly an innovative platformer, or a new game to speedrun, I think Splasher would do nicely despite these minor flaws.