Flinthook is a 2D action platformer made by the folks over at Tribute Games, who were also behind some rather well known indie titles such as Mercenary Kings and Wizorb. Flinthook continues the studio’s preference for 2D games with an emphasis on platforming, but this time around, it adds some rogue-lite elements into the mix.

As someone who had a good time with some of the studio’s previous games but didn’t find them particularly engaging beyond a few hours, I was quite surprised when I barely noticed time passing while playing Flinthook.

The game offers weekly and daily challenges that you can undertake aside from the main mode, which is divided into five different chapters. Each one of these chapters corresponds to a unique boss, and these chapters are unlocked by beating the previous one. When choosing to go after one of these bosses you conduct raids on various ships, each with a series of randomly-assembled rooms along with a set of specific ones that you can see before deciding to raid a certain ship. These include extra loot, relic shops, trap rooms and low gravity amongst many other modifiers that add more variety to the mix. If you find the bosses to be too easy or if you’re just looking for an extra challenge, you can purchase hardcore versions of the bosses you’ve already defeated on the blackmarket.

The goal in each chapter is to collect ghost gems, which you find before leaving each ship, to reveal the boss’s ship location. If you die, all your progress is gone with the exception of your perks and the upgrades that you buy on the Black Market with gems. Even if you keep dying and failing, as I’m sure a lot of people will, the game still features a permanent progression system that helps you progress by getting stronger and stronger the more you play the game. The gems you collect to get to the bosses can also be used to buy permanent upgrades, such as more health points, increased experience gain or additional perk slots. Much like the permanent upgrades that you get from the Black Market, perks also give you specific bonuses, such as extra health or faster movement. You have a limit as to how many you can use. On the other hand, they are free and you can acquire them by playing and leveling up.

In essence, you’ll be running around inside these ships throughout a series of interconnected rooms while shooting enemies and overcoming a series of obstacles. Speaking of which, there are a variety of room-types in the sense that while some rooms are pretty simple, others spawn a few waves of enemies that you have to kill in order to leave. There are also rooms that are more unique. For instance, some will have traps which you need to avoid, either by timing your jumps, slowing down time or using your hook to escape. Others still will present you with two different gems which can either help you in some way or curse you. You can only choose one of them and you don’t know what these do. In any case, where the game really excels is in its gameplay. You can fire your pistol in a 360º arc, run, jump and use your hook to quickly move horizontally or vertically along the rooms. With that said, you can only use the hook at certain points in a level, but learning when and how to use it helps you gain a bit of momentum, allowing you to escape many horrible deaths and flank enemies. Shooting enemies feels very snappy, and while you have multiple secondary weapons that you can pick up, I didn’t find them as satisfying to use as the regular pistol. It is when you combine the simplistic yet satisfying shooting, the time slowing ability and the characteristic movement of the hook in order to deal with waves of enemies and traverse a series of traps – such as saw blades, laser beams and spikes – that you really see how good and addictive Flinthook is.

In terms of the sound and look of the game, Flinthook manages to stand out from others in the genre with an extremely enjoyable and catchy chiptune soundtrack, spot on animations and a rather unique space-pirate inspired pixel art which is simply gorgeous. This way, the smooth animations really make the combat and movement seem rather seamless. One other thing that deserves praise is the early morning cartoon-like intro to the game, which every person I’ve shown has loved. 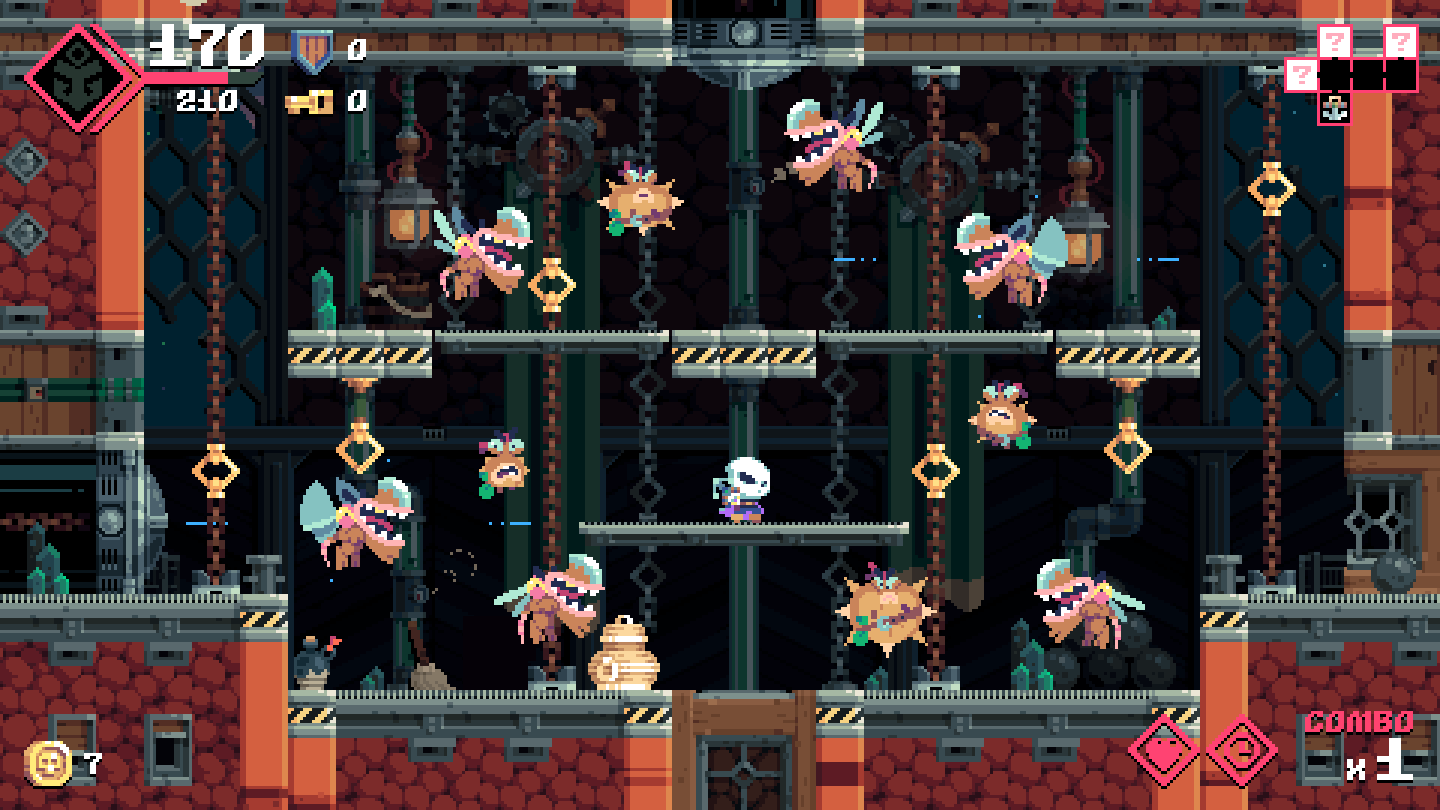 In any case, the game is plagued by one big issue which seems to put some people off and that is the way the game handles, more specifically, the controls themselves. I’m not really one who enjoys playing platformers with mouse and keyboard, and in a game like Flinthook, where the mouse movement is constrained to an arc around your character, it’s pretty clear that the game was designed with a thumbstick in mind. With that said, the issue with playing the game with a controller is that you use the left thumbstick to both move and aim, which is really bothersome, at least at first. Still, even after you get the hang of it, the fact that you can’t aim and move in different directions is a real hassle. I wish the game would have an option to simply rebind the controls as that seems to hinder the game a lot. Nevertheless, once you’re a few minutes into the game, you’ll unlock a pair of boots that lets you aim without moving which, in a way, helps mitigate the issue with the controls, at least to some extent.

With all that said, overall Flinthook has enough quality content to at least warrant you to beat each chapter once. Even then, if collectibles are your thing, the game also has its fair amount in the form of relics and lore books that you can still hunt. In the end, if you’re into action platformers, rogue-lites or anything remotely similar that is fast-paced and rewards your effort, I really recommend you give Flinthook a look. If it wasn’t for the finicky control scheme this game would pretty much be legendary.