Spaceship Looter takes a fun premise for a science-fiction twin-stick shooter and wraps it up in pixel graphics and rogue-like elements.

As the title of the game suggests, you take the role of a spaceship looter, working independently out of the Spaceship Looter Bar to claim salvage from derelict space ships. There’s not actually much loot to find; instead you’ll come across lots of boxes with nothing in them, a few different types of traps or other defences, and hordes of baddies mostly in the form of strange aliens or robots.

The game features ‘retro’ pixel graphics with a good feel to them. Human characters look nice and have some personality, and the boss enemies are unique and pretty good, too. Normal enemies are a bit lacklustre for the most part, with each ship featuring only a relatively small number of enemies, which usually include a few reskins amongst their ranks.

Weapon effects are quite nice and the game moves smoothly with half the screen filled with ‘bullets’ of various shapes and sizes. Animations let the side down a little, though, as do the weapons. I’m not sure who thought a machine gun should look like that (or shoot like that, for that matter). 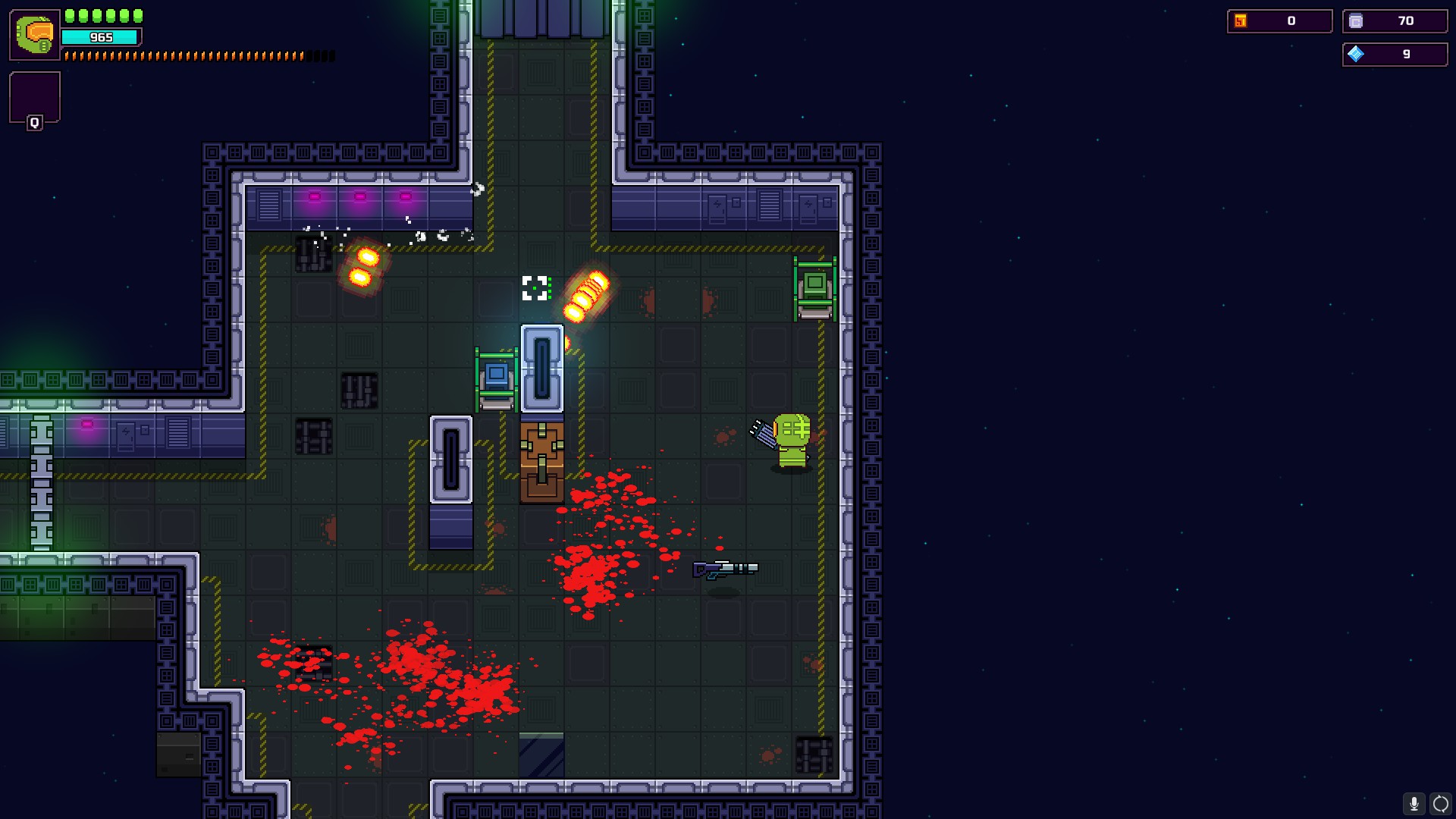 The camera is fixed in position and angle, as you’d expect in a pixel-graphic twin-stick shooter, and very occasionally you’ll have enemies or traps hidden behind room objects, but that doesn’t detract from the game at all.

The interface is very simple, but requires minimal interaction to achieve your goals. I particularly like the simplicity of the main menu. The map is good and includes all of the markers you need to remember where you’ve left unopened chests and the like, though a little legend in one corner would have been a nice addition.

There are no graphics options beyond full screen / windowed mode selection; you can’t even set resolution or vsync.

There’s a nice title theme that feels appropriately ‘spacey and actiony’. The in-game music, too, is quite good and fits well, but it does get a little bit repetitive, as it seems to play continuously until you reach a boss level.

The sound effects are pretty good, too, with nice blasts and shots of weapons and explosions, and little groans when you’re hit. There’s nothing outstanding, but they do the job.

As far as the rogue-like science-fiction twin-stick shooter genre is concerned, Spaceship Looter offers very few gameplay surprises or deviations from the norm. Using controller or keyboard and mouse, run about with your left hand to dodge bullets and aim and shoot with your right hand to kill enemies, across levels made up of connected procedurally generated rooms, while collecting two different types of currencies: one which expires when you die, and the other which remains with you across play throughs until you spend it. Each room you enter locks its exits until you kill all of the enemies within, and if you’re lucky you’ll find some keys and boxes to unlock with them, and those boxes will contain something useful.

Spaceship Looter has multiple difficulty levels — only Very Easy and Easy are unlocked before you’ve beaten the game at least once — and multiple player characters — only one of whom is unlocked until you’ve beaten one or more of the bosses. It has a ‘lobby’ (in this case, a pub) shop where you can buy items using the permanent currency, and it has in-game shops (in this case, arcade machines) where you can buy character improvements for that play through only, using the temporary currency. It has multiple weapons, stat powerups, active and passive items, and skills. And it has the standard level layout, with a few ‘normal’ procedurally generated levels separating each pre-determined boss battle level, until you reach the end. 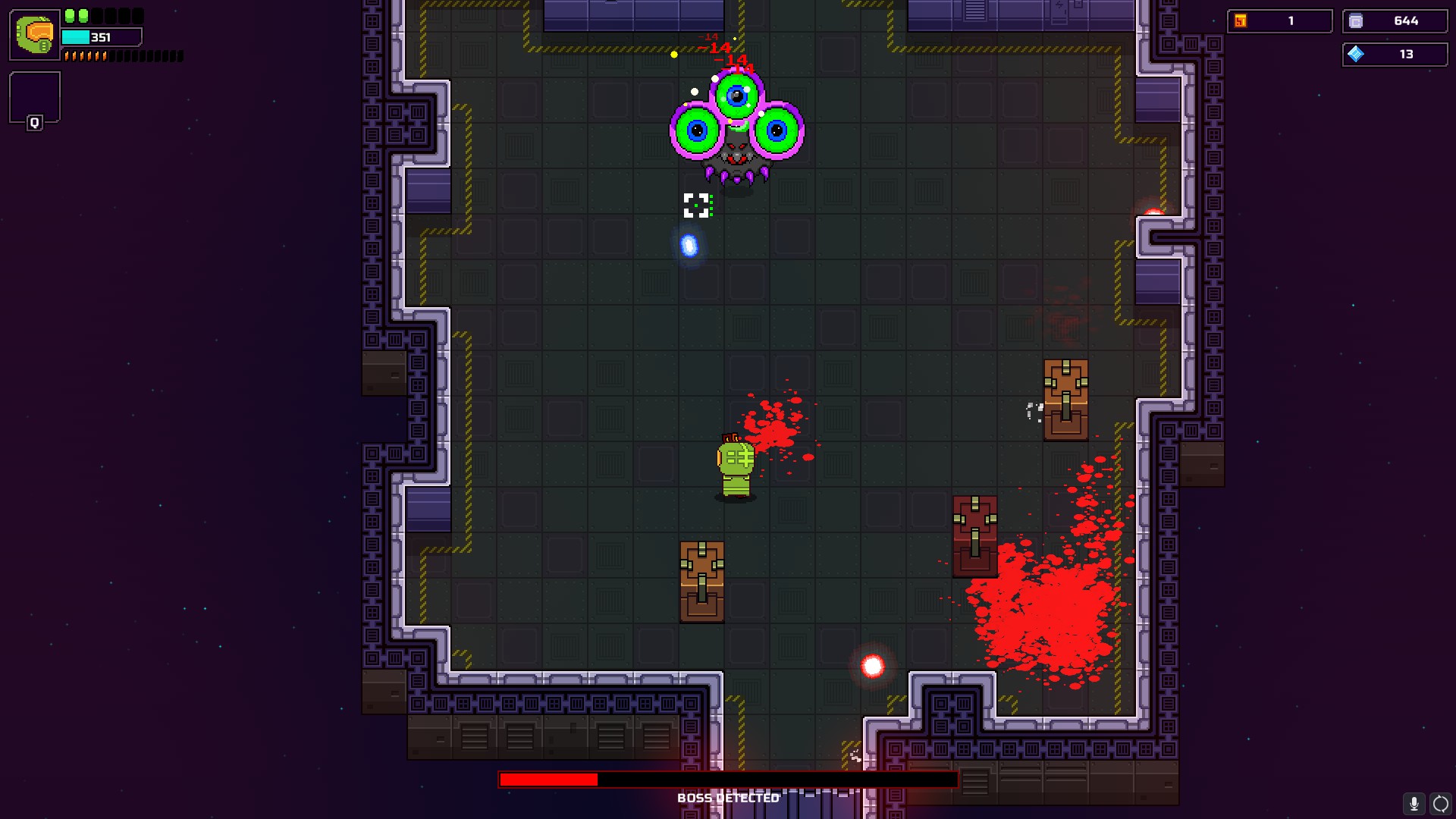 All of this is pretty typical for the genre, and this game does most of it similarly to its peers. It’s unfortunate, then, that where it differs, it detracts from the overall experience rather than improving it. Items purchased from the lobby shop with permanent currency are temporary, lasting for that play through only, leaving no way to permanently improve your character, and thus no long-term progression. The skills available are very limited — only one per character — and they all essentially function as a secondary weapon. And the in-game shops only sell very expensive, and not very good, minor improvements to your secondary weapons. Unlockables are definitely too few and far between for a game like this. Oh, and I don’t know who thought it would be a good design choice to have enemies that explode on death, but they really should consider a new line of work.

All of this adds up to a feeling of lost opportunity. Spaceship Looter could have done great things, but with these choices, it becomes yet another game in the ever-growing twin-stick-shooter pool.

Not all is lost, though. Characterisation is good — though very poorly worded; the game could definitely do with some proofreading — and the premise is interesting. It has a map, which is sorely missing from some of its peers in the genre, and you can save ammo by throwing a couple of object types around if you want. And there’s a welcome small amount of story progression available through rescuing NPCs so that you can deal with them in the lobby on your next game. 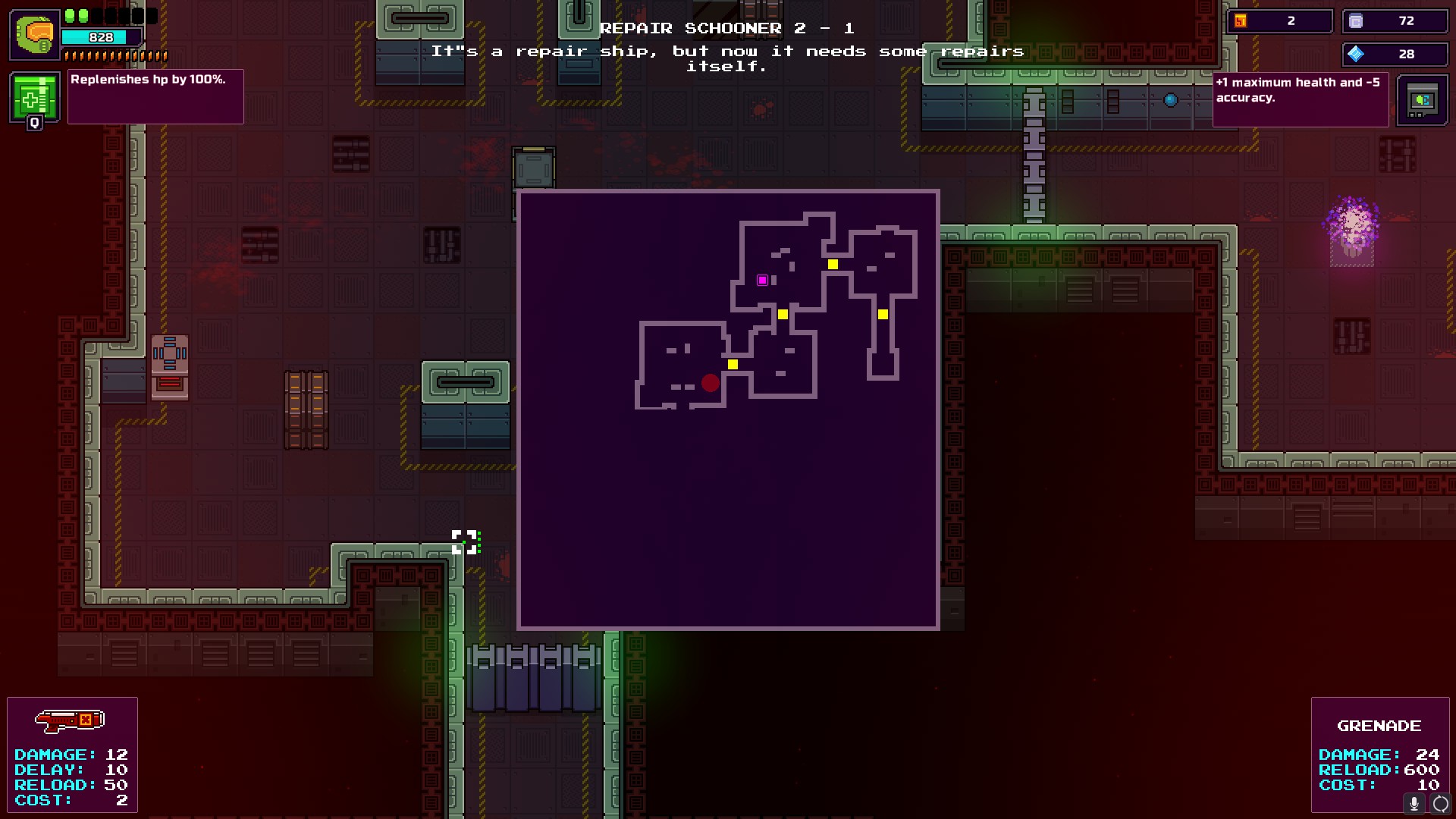 I also haven’t come across any bugs, which is a good thing. And it’s actually quite fun to play. Everything moves about well, the random-number generator doesn’t have enough sway to be too evil too often, and there’s a feeling of accomplishment when you see half the screen filled with bullets and you manage to weave your way through them and take out the bad guys without getting hit.

If there were more actual ‘loot’ to be had then I could see more reason for the characters to continue looting. As it is, I imagine after the first ship they’d be looking to throw it all in and wash dishes for a living. After playing Spaceship Looter for a few hours in one go, I feel a bit the same: a lot of effort for too little reward. I guess I’ll come back to it again later.

Cons:
– No permanent improvements or character progression
– The premise is basically just an excuse; it’s not developed at all
– Skills are underpowered, even when upgraded
– Enemies exploding on death is not a good way to increase the challenge
– Not enough variation in levels or enemies

Spaceship Looter is a fun retro-style science-fiction twin-stick shooter, but it lacks in longevity compared to some of its peers. It’s a long way short of the best in the genre, and the dearth of permanent character improvements and unlockable weapons, items, and skills make it more repetitive than it could be. It’s a good game, just not as good as it might have been. 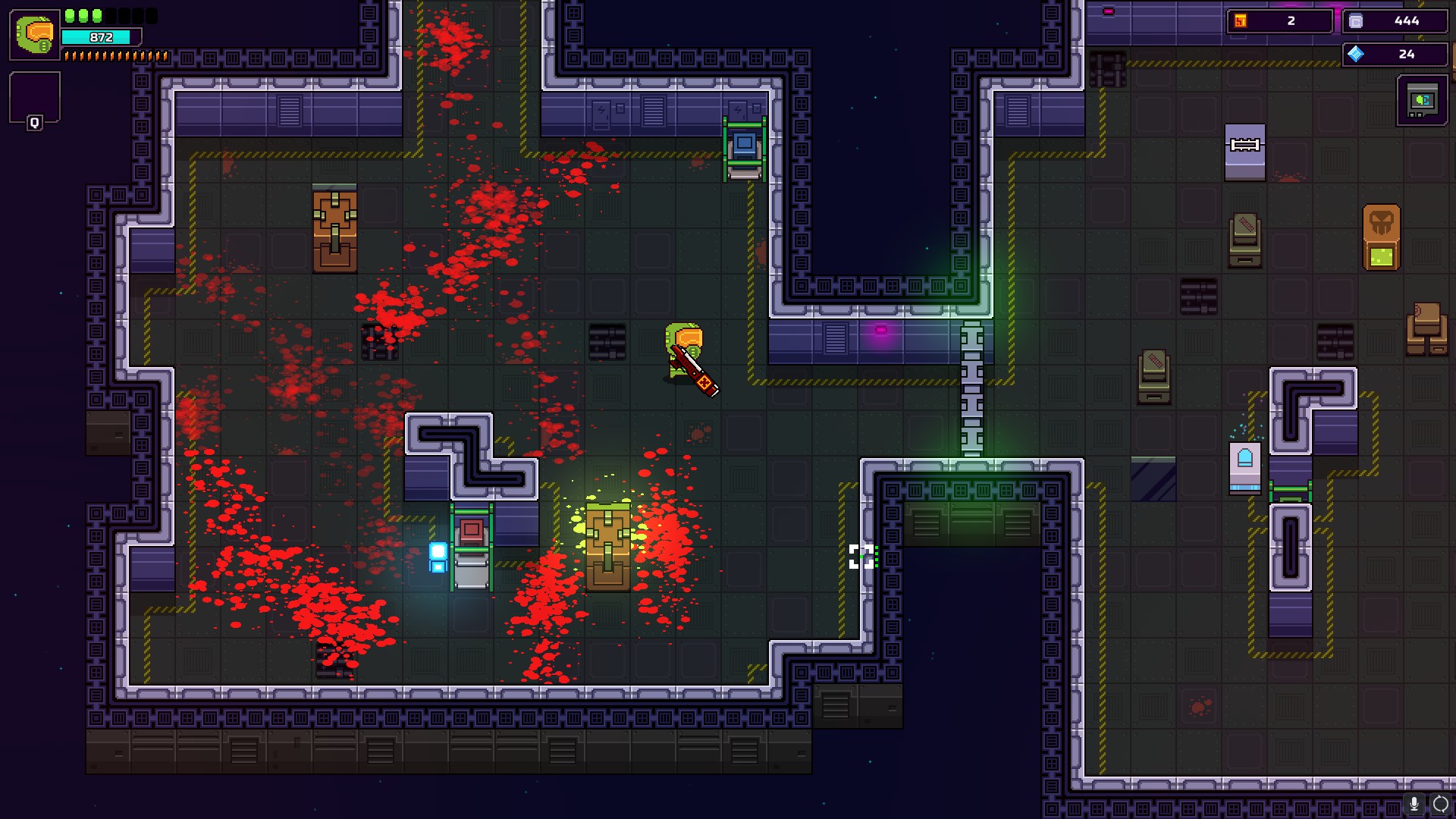