Danmaku Unlimited serves up another slice of solid, reliable bullet hell. The problem is that the market has more interesting and more inventive options. Good is no longer good enough.

The series that serves up reliable bullet hell games, but reliable in a field of excellence?

This is a field inhabited on Steam by the legendary Mushihimesama. Yes, it’s a mouthful; it means “bug princess” in English. As you may expect, the Japanese do not skimp on letters, or on bullets; there are YouTube videos about this game that will blow your mind. A field in which the almost unparalleled Ikaruga got ported, flawlessly I might add, to the PC platform. Then there are the bullet hell entries that actually push the envelope, such as Revolver360 Re: Actor, which is a symphony of blue and turns a 2D bullet hell plane into a 3D “Tube” that entirely rewrites the rulebook. There’s Sine Mora, which manages similar tricks whilst looking effortlessly beautiful at the same time. And there’s Jamestown, loved and respected by many who have stumbled across its pixellated tale of war and aliens across Mars, and still sitting on a 96-or-so percent positive score on Steam (and that’s over 500 users, so not exactly that small a sample size).

So yes, in this field you have to stand out, and then some. In this world of entries that shine like stars in the night, it’s not good enough to be good anymore, you have to be excellent. You have to do something, or be something special, or you have to come up with a mechanic that actually forces players to change up their gameplay in order to really break out from the rest of the pack. Danmaku Unlimited does provide very good examples of stuff that already exists, but does it do anything new?

No. Not a sausage. What it does, it does really well, but it doesn’t do anything -different-.

If you’ve played any bullet hell since Warning Forever, the game is going to be intimately familiar, right down do the small hit box and geometric-shape bullets that pulse and float down the screen, creating intricate mazes through which you have to weave, whilst your ship spews a metric ton of fire back up the screen at the assortment of generalised nastiness that awaits. The mentality when it comes to killing things is “What’s up top, big stuff or little stuff? If it’s big then use Beam, otherwise use Vulcan”. This is pretty typical of what I would call Eastern bullet hell games, those being games where the ship is largely irrelevant to the hitbox; it’s the little dot in the centre that actually matters.

As you play, the enemies at the top continuously generate varied bullet patterns that you’re required to dodge, unless you kill the enemies, in which case their bullets are converted to score-gaining pellets, which you can then collect as you move along. This is how you keep things manageable until the boss phases: blast all the junk up the top, keep the bullet patterns from overwhelming you, rack up terrifying scores, and finally reach the boss where the real dance begins.

As is normal in these kinds of games, there’s a bonus mode. In this case it’s called trance, which is either manually or automatically set off once the trance meter hits maximum, granting you a bonus in firepower and converting the ghosted bullets into gems, which drastically boost your score gain. This is very similar to the Vaunt maneuver in Jamestown, or other bomb-type clearances in the Cave-style shooters, all of which provide significant respite. Again, this all sounds very well laid out, and mechanically it works just fine, but it just doesn’t do anything new. 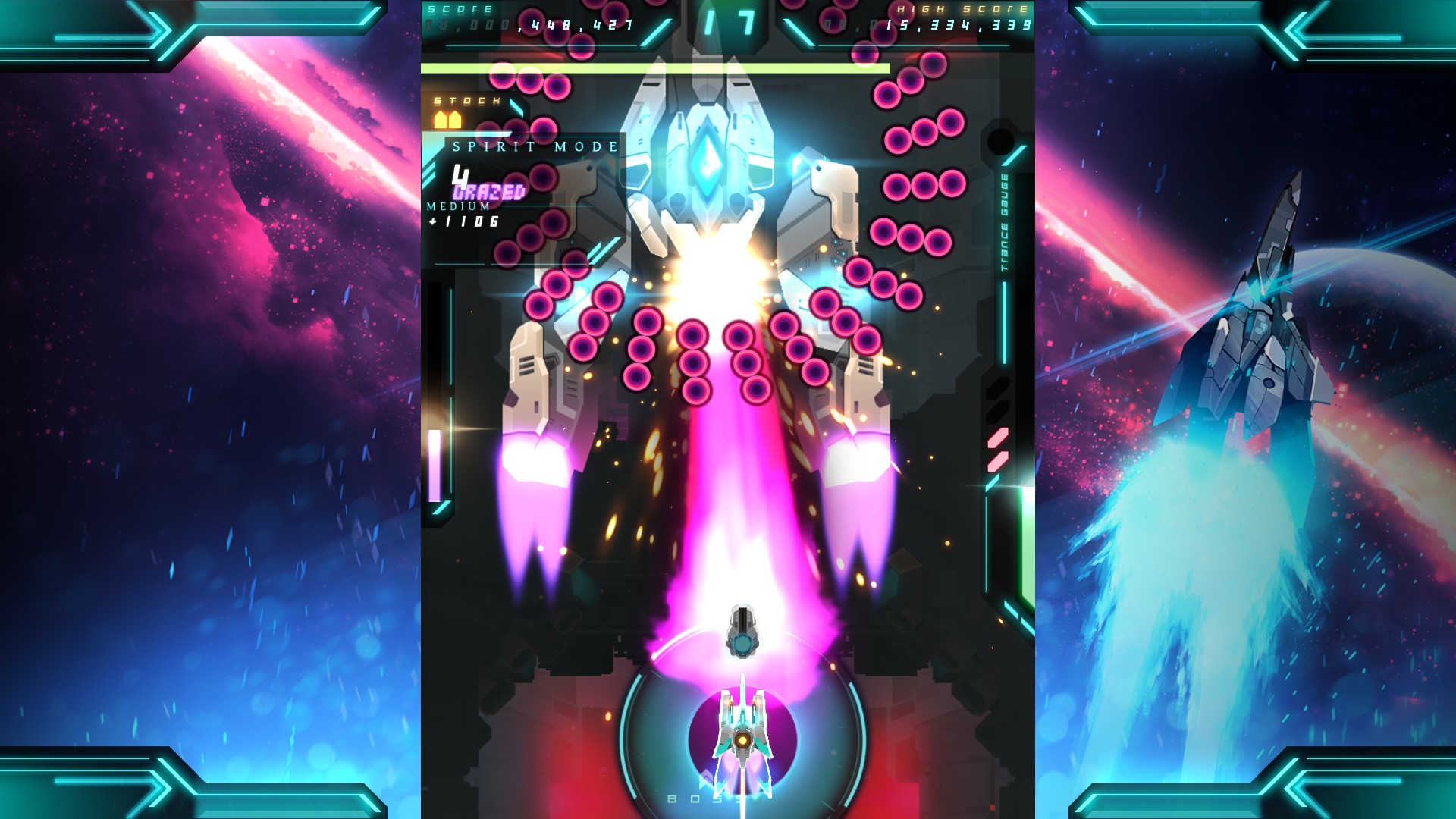 And therein lies the problem. Danmaku Unlimited 3 is good; really good in fact. But everything it does has been done elsewhere multiple times before, and has been done better. The graphics are fine for what they are doing; they keep things clean, make sure you are aware of your hitbox and what you need to avoid, and keep you appraised of the situation nicely. The music is solid, if somewhat on the “Rawk” end of the scale (very thud, thud, thud; very bullet hell). It’s just that we’ve been here before, so many times, and at this point a game in this field needs to find something to do either better, or on a grander scale, or differently.

The greatest crime here is that this game is safe. It’s good, but it’s safe. If you’re a major bullet hell fan then that’s not a bad thing at all. At the price point set by the game, you’ll likely snap it up, enjoy it, consume it, and move on. But if you’re looking for something that really shines, then this is not it. If you’ve not beaten Ikaruga, Jamestown, Revolver360, or any of the many wonderful, more original entries in the genre, then there are better choices for your money out there. This one can wait until you’ve a bit of spare change and a bit of spare time.

If I had limited funds and I had to choose a single bullet hell to keep me company over long nights, then Mushihimesama would almost certainly be my choice. That game is a far stronger choice overall. I would choose Jamestown over Danmaku Unlimited 3, for that matter, purely because Jamestown has the sheer variety of ship types and fire patterns that make you learn the game in entirely different ways. This game would be on the list, absolutely, because it is a genuinely good game, but it would be down below far stronger entries in the field because it lacks anything that propels it to greatness.

Good, is no longer good enough.

TLDR: Wait for a sale on this one. Then, by all means, grab it. It’s a solid entry in the genre, but there are better options out there.