Asura is a single-player hack-and-slash ARPG with rogue-like elements set in a fantasy-themed world apparently inspired by Indian mythology.

You play Asura, a demon-like being created as a result of being an unwilling sacrifice by the God-King, Maharaja Hasirama, in an attempt to save his people and empire (yes, a king with an empire …) from their prophesied doom. Your goal is simple: avenge yourself upon Hasirama and his five generals, starting with their armies.

Asura is played from a 3/4, isometric-style viewpoint, though the game is rendered in full 3D. It’s a similar point of view to Darkstone, but with no ability to manually control the camera, which sometimes leaves you facing in an undesirable direction.

The graphics look reasonable, if somewhat basic. Models are modestly detailed and animated, and textures are acceptable, but the environments look rather bland in places. Items you equip are added to your character model, which is nice, and special effects are quite good, too.

In-game graphics options are numerous, should you need to try to optimise performance for your system. 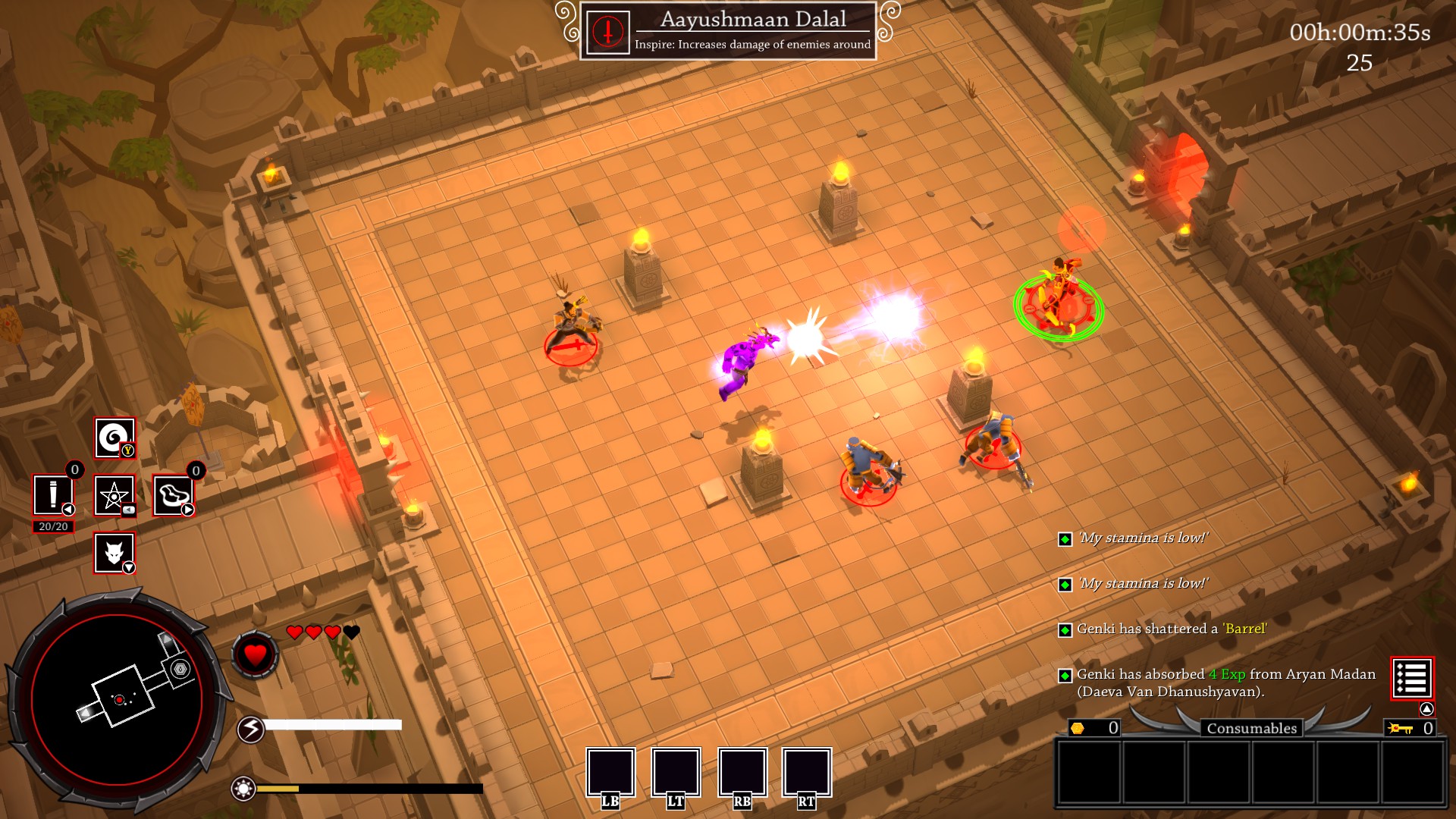 The music is okay, with a sound that fits the atmosphere quite well. It’s nothing exceptional, but it’s not bad either.

The game includes voices, but they’re all in a language I don’t understand. Subtitles are provided where necessary.

The developers recommend a controller, so that’s what I used to play Asura. The controls are a bit unusual, but they’re simple enough that you should get used to them quickly: left stick moves; right thumb buttons attack, dodge, swap weapons, or sprint; and D-Pad accesses inventory-type actions. Once you learn some active skills or spells, they can be assigned to the finger triggers.

Each game is divided into five procedurally generated levels. Each level is made up of a number of rooms separated by corridors. The corridors are always ‘safe’, as are some rooms, but when you enter a room with enemies in it the doors lock and you can’t leave again until you’ve killed them all. It’s a tried-and-true formula, and Asura doesn’t do anything different in that regard. 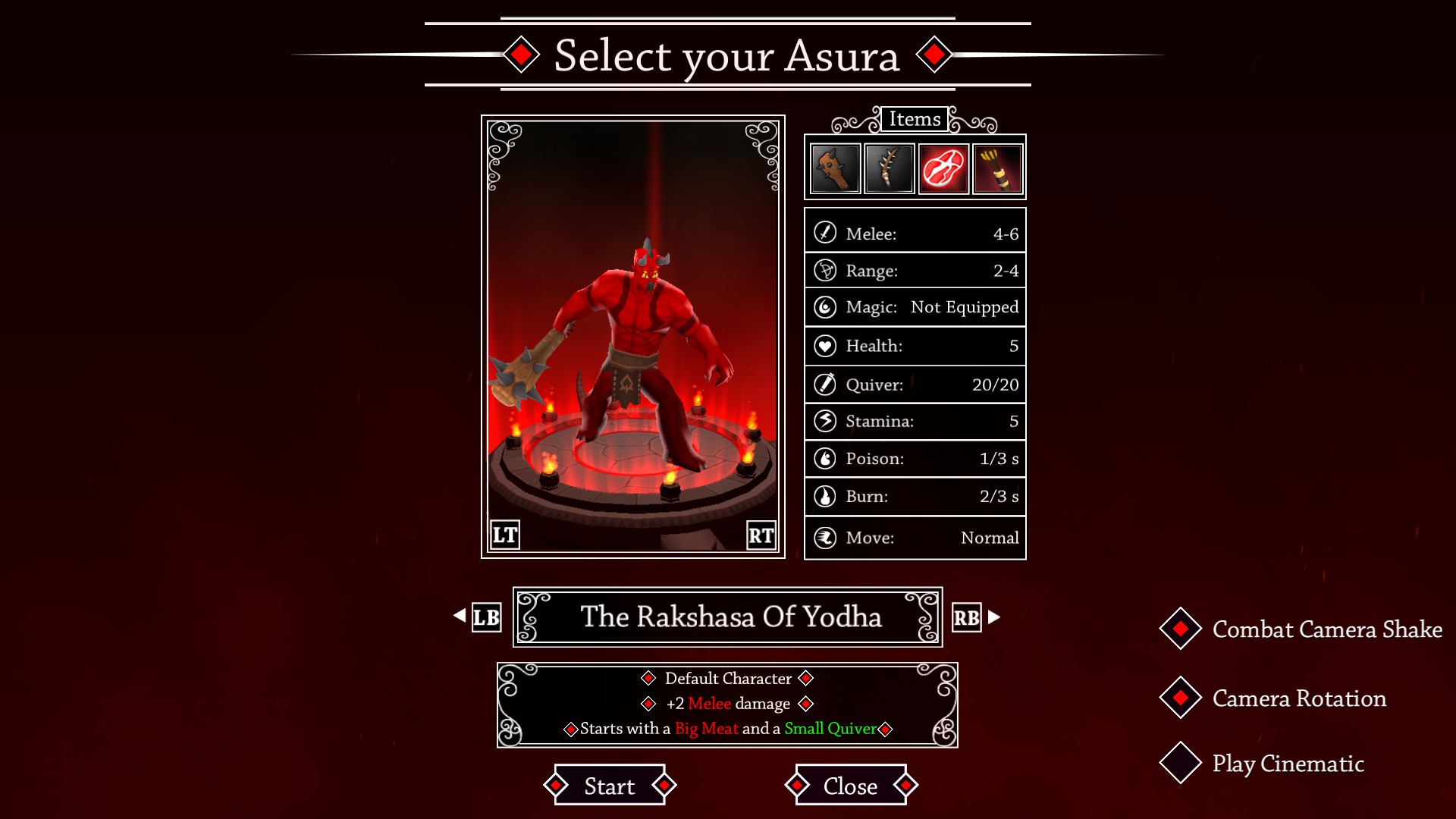 Combat is action oriented, but with a strategic hook. You have both melee and ranged weapons available to you, and you can swap between them instantly with a button press. Enemies are also divided into melee and ranged types. Attacks against the same types do reduced damage, so you might find yourself hacking away at a melee opponent, when a single well-placed ranged attack would kill him. It’s a simple hook, but it works well to make combat more interesting.

Once you’ve killed all of the enemies in a room, you’re given the choice to absorb or scavenge from each of their bodies. Absorbing gives you a certain amount of experience points, while scavenging gives you a chance at a random item drop. Gaining enough experience advances you to the next level, which seems to have no effect other than to give you a skill point to spend on the skill tree. The skill tree itself is procedurally generated each game from a larger pool of skills, similar to skills in Leap of Fate, so you may find yourself playing a game with fantastic skills available early on, or one with nothing available that you want at all.

You can also sometimes find rooms with shops (‘Dukaan’), which always have the same items, or forges (‘Lohaar’), which allow you to craft random items. Both of these take the game’s currency (‘sona’), which is in quite short supply. Items seem to be procedurally generated, too. As well as replacement melee and ranged weapons, you can find armour pieces for your three different armour locations: hands, shoulders, and legs. Items tend to be the be-all and end-all of the game, meaning that there’s a large degree of luck involved each time you play. 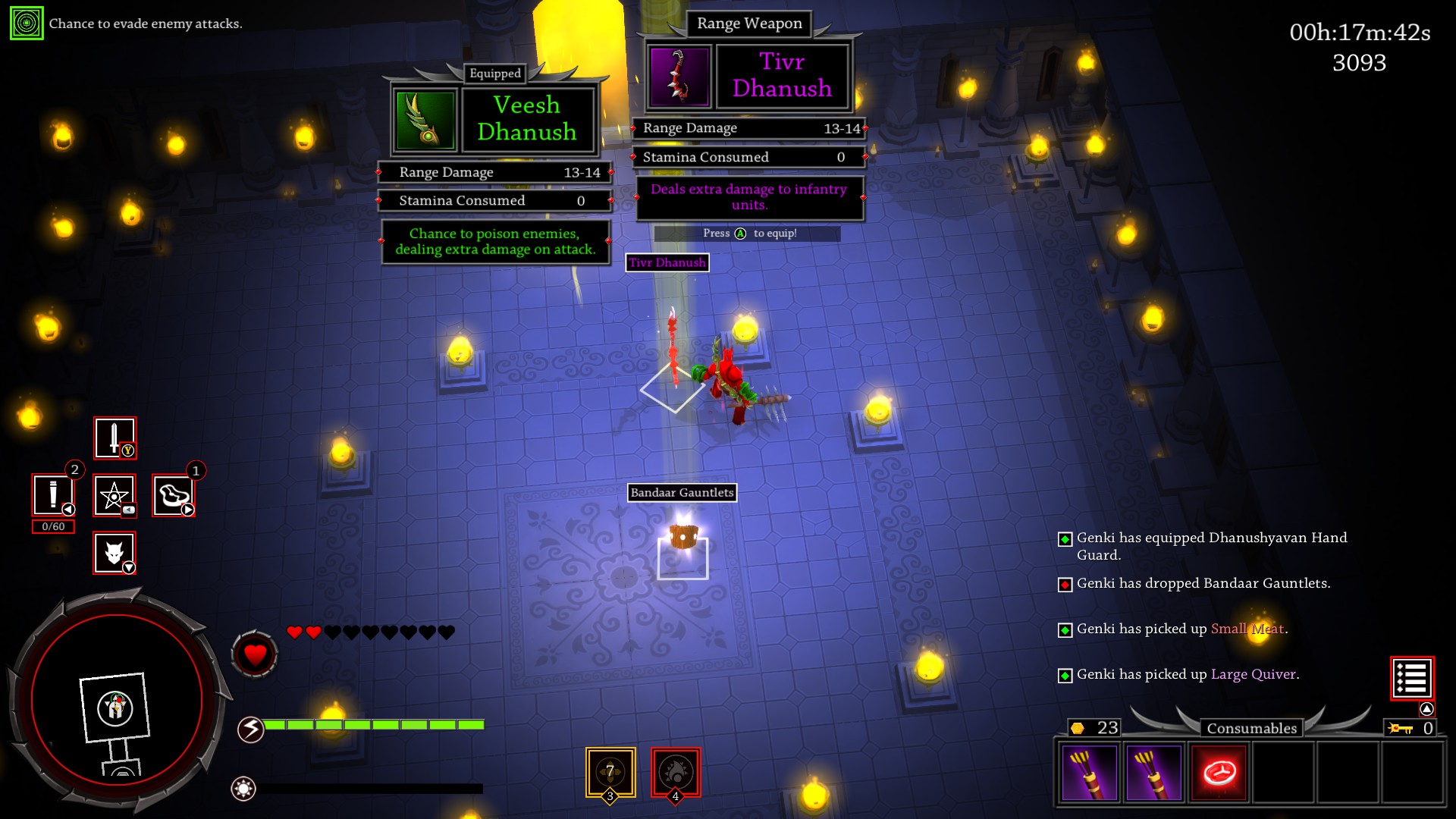 Finally, each level has one room with a boss in it: one of the Maharaja’s generals. Unlike many rogue-like ARPGs, the bosses aren’t always the same each time you play, and there’s a reasonably wide range of difficulty levels between them, especially when you consider the random nature of which items and abilities you may have at your disposal. Still, they all have patterns that can be learned, and as long as you haven’t been completely ripped off with your equipment and skills, you’ll at least have a chance of success with each one.

While the core hack-and-slash gameplay of Asura is quite fun once you get used to the controls, there are a few amazingly frustrating design elements that make me question just what the designer was thinking!

The first is the stamina mechanic. Not only do most melee weapons and some magic and ranged weapons use stamina for each attack — sometimes great chunks of it — but dodging also requires stamina from the same pool. So you’re hacking away merrily at some fleet-footed archer, or taking potshots at an armoured behemoth, and need to dodge urgently, only to run out of stamina, and bam, you’re dead. The huge amounts of stamina needed for some weapons would be bad enough on their own, but adding dodging to the stamina-sucking actions is a poor design decision, leading to considerable frustration.

The second is the stunning mechanic. Enemies that stun you kill you very easily. When you’re stunned, you’re completely stuck, for seconds that seem like an eternity. Most times that I’ve been stunned, it’s game over then and there. Whatever enemies are around have reduced my health to zero before I could move again. That’s no fun at all.

The third is the fire mechanic. This is probably the most frustrating of all. You’ve finally managed to collect a full armour set, and some poxy little teleporting monkey thing appears right next to you and throws a fireball at you. Not only do you take damage from burning, but the game destroys one of your hard-earned items. Who on Earth thought that was a good idea in a rogue-like dungeon crawler!? 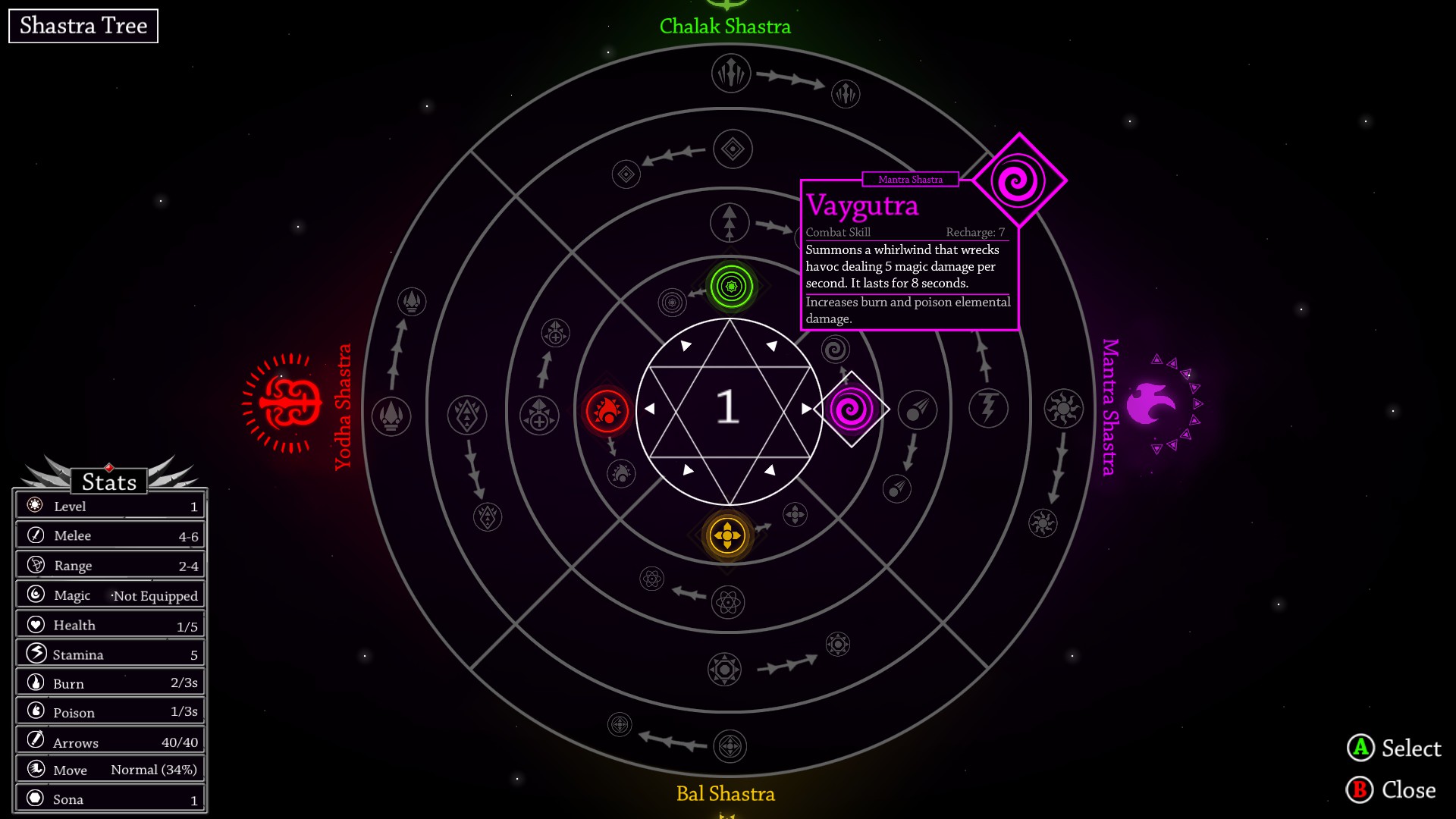 There are also many smaller issues that add to the feeling of disappointment that grew in me as I played the game. There’s a fair bit of writing in the game, given the interesting lore and unfamiliar setting, but amidst that writing is a rather large collection of grammar errors, most of which would be picked up by an automated tool. The random level generator also produces wildly varying levels that are sometimes a bit broken: levels with multiple locked doors and not enough sona to buy keys, or room after room of enemies with no health drops and no equipment. These aren’t game-breaking issues. The randomness is common to rogue-likes everywhere, and is what makes them so replayable, but Asura just doesn’t seem to get it quite right; it’s more frustrating than encouraging. Oh, and don’t get me started on the auto-aim. Ranged combat would be much more fun with manual aiming using the right stick, twin-stick-shooter style.

Cons:
– Extremely frustrating design elements
– Auto aim is terrible
– Random item drops have more influence over your chance of success than anything else
– The quality of the writing is not good

Asura is an interesting game, but a flawed one. The developers have done a good job of integrating rogue-like elements into what would otherwise be a rather simple ARPG, but some of the design decisions have led to the game often being much more frustrating than fun. The rogue-like hack-and-slash genre is a crowded one, and Asura sits pretty solidly in the middle of it.