Rise to Ruins is a complex village simulator with god-game elements.

Rise to Ruins is a village simulator with some god game elements, from indie developer Raymond Doerr. It was previously titled Retro-Pixel Castles.

In Rise to Ruins, you’re given a group of settlers with whom you have to found a village and survive for as long as possible. Like most games of this type, there’s no real end goal — or at least none that I’m aware of — instead you tend to play until your village is wiped out (or nearly so) and then you start again and try to do better next time. The game includes seasonal climate changes and a day/night cycle, both of which present further complications and challenges, but which are great additions to the game. 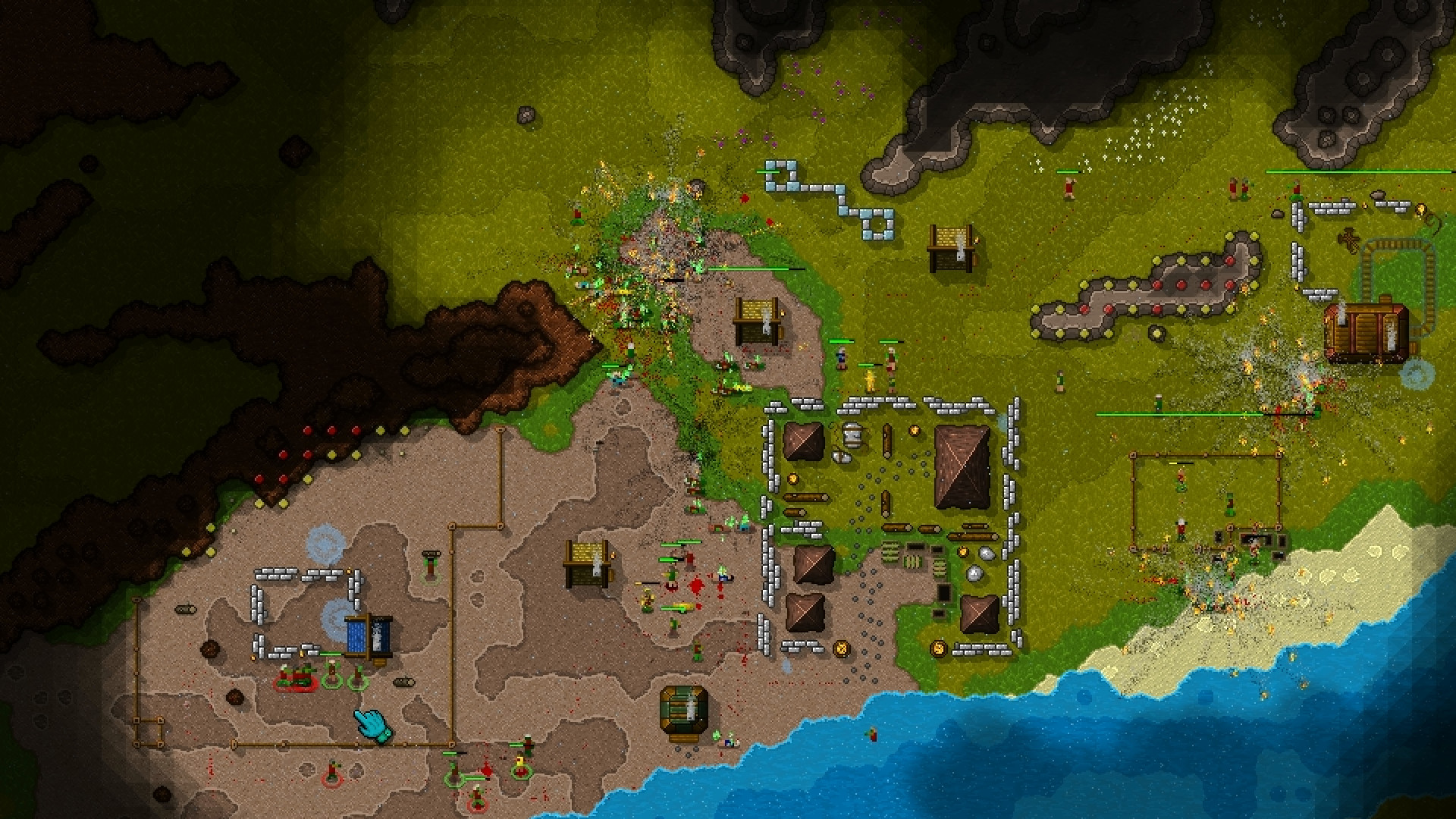 The game is played from a top-down overhead view, with characters (people and monsters) drawn from a three-quarter perspective to give them a bit more personality. You can adjust the zoom from a functional-but-not-quite-far-enough minimum, allowing you to see a fair bit of the surrounding area, up to a chunky-pixel maximum, where a single villager takes up a fair portion of the screen. At minimum zoom the game looks quite nice, with map tiles being well drawn, and characters looking like colourful ants. At maximum zoom the characters look a bit too blocky for my liking.

There are no real graphics detail settings, though there are particle and shadow settings, and the obligatory windowed/full-screen options. (ProTip: Don’t play in full screen; it’s very buggy.) It’s not a graphics-heavy game by any means, but it chugs along nicely even with a hundred or so villagers all going about their business.

Music has a nice fantasy/mediaeval theme that suits the game well in my opinion. Sound effects are functional, but nothing special.

Rise to Ruins begins with an overhead map of the game’s continent, from which you select a region in which you want to settle your first village. These locations differ in available resources and, I think, climate, so choose carefully. (You can found multiple villages in different regions, but you only have a limited pool of villagers, shared between them all.)

After you’ve chosen a region the game takes you to the region map, from which you’ll play the game proper. There’s no real tutorial at the moment, but the game gives you some help in the form of pop-up tips. These are a bit lacking, though. For example, I had no food growth and no food, but nothing in any of the tips told me I should build anything until it was too late, and even then I didn’t know the best place to build it. An in-game tutorial would really help; the youtube tutorial video notwithstanding. Still, although you should be able to work out the very basics pretty easily, it’s a steep learning curve when things go wrong and you don’t know why. The Steam Discussions are a useful resource.

Anyway, you choose a section of promising looking land — water, rocks, trees, and wild food, if you can find it, are all good — and build a camp. That then lets you build other buildings, too, and before long you’re harvesting resources and growing your camp into a little village community. 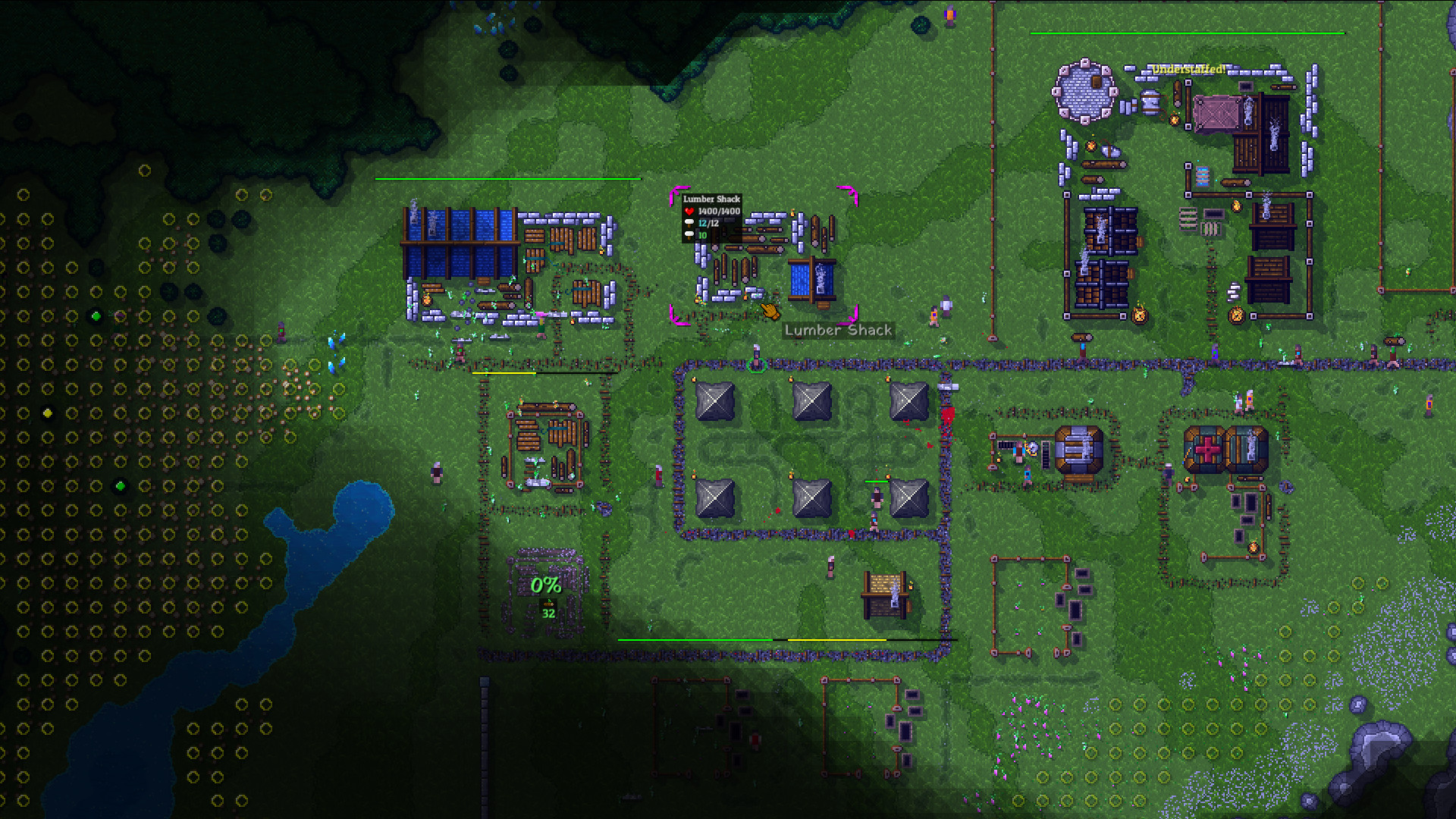 As is common to many god games, you don’t have any direct control over your people; you can assign them to tasks — builder is the only one available to begin with, but as you build more buildings, more jobs become available — and that’s about it. To harvest resources you select and highlight them on the map, and your people are supposed to harvest as many as they need, and no more.

You very quickly need to build up some basic infrastructure, including housing, food growth, water processing, and some rudimentary defences, the latter being required because you never know when a wandering monster might wander into your village and start attacking your people. Combat seems to be stacked against you, too; you don’t have any really good ‘troops’ of your own, and the tower-defence style of defence doesn’t quite seem to work: monsters bash through walls rather than being funnelled to your ‘kill zone’, and it’s sometimes hard to even notice them in the first place, with no ability to automatically focus on important events.

You also have a small collection of god powers, which you can use by spending your collected essence: another resource, but one that’s harvested by you rather than your people. I was a little disappointed in these, as I’d been hoping for a bit more range and depth to them, but what’s there is useful and well thought out. I guess it would be fair to say they’re more like Populous than Populous II.

Rise to Ruins has been in Early Access for about two-and-a-half years, so you’d be forgiven for worrying that it had been abandoned. It definitely hasn’t, though: the developer releases regular updates and is active in the Steam Community for the game. As you’d expect from an EA title, though, Rise to Ruins does have some bugs. My first hour with the game consisted of about 15 minutes of playtime, followed by 45 minutes of trying to recover from a crash. The game just wouldn’t restart and instead sat there spinning Windows’ blue wheel of doom until I killed it. I eventually manually edited the settings and turned off full-screen mode and after that it worked again.

You’ll encounter minor issues, too. Even with many idle people I found that building would often stop due to no resources being available, so the automatic resource harvesting seems to need a bit of adjustment. The UI is a bit wonky and controls aren’t what I would choose, either, but they’re functional, and the developer has stated that he reworks the UI every now and then, so what’s here now may not be here forever. There’s a big message reminding you to press the middle mouse button to cancel whenever you’re in the middle of an action, such as designating resources or using god powers; it’s lucky it’s there, since middle mouse button to cancel is not intuitive at all. 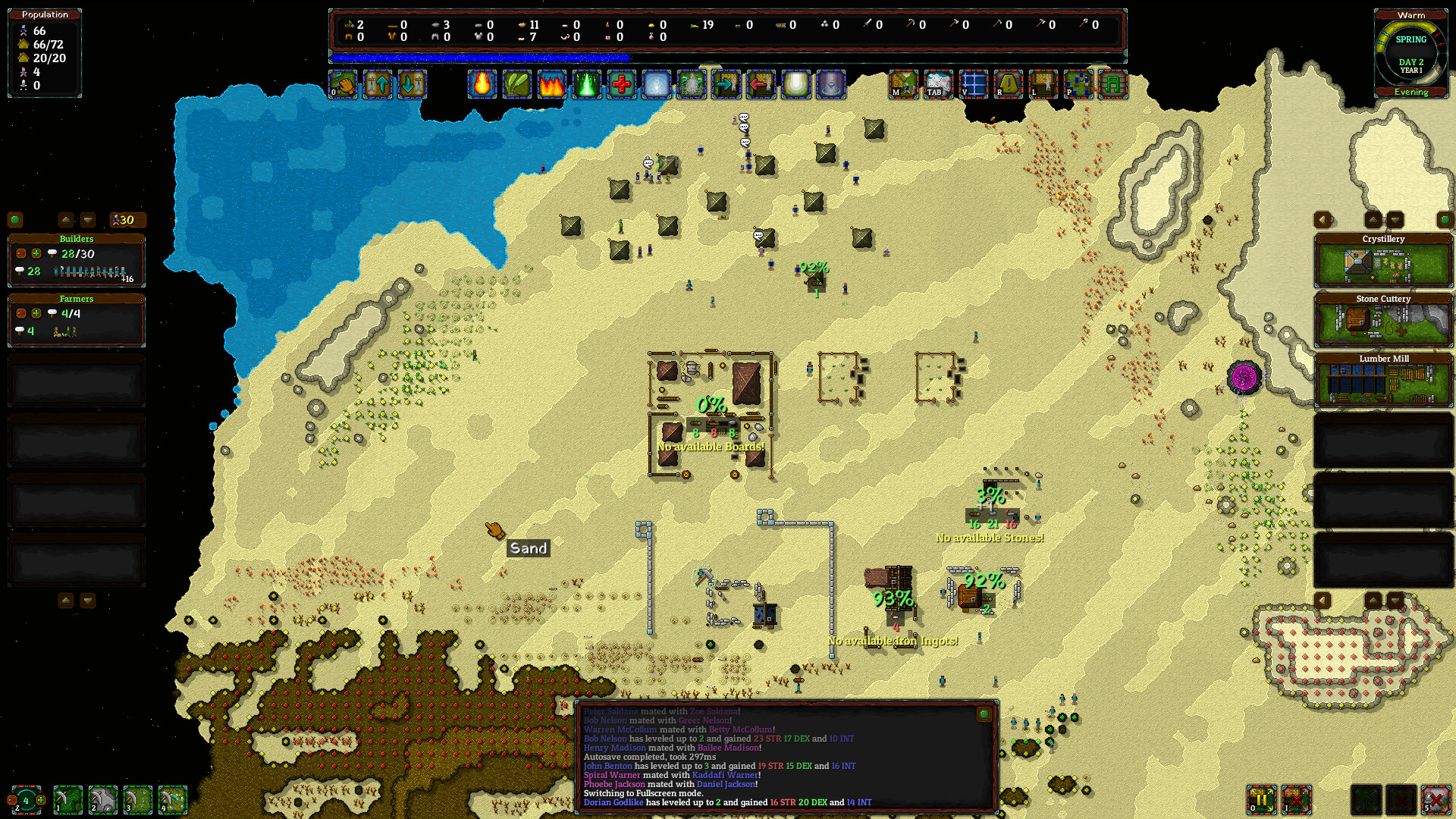 I’ve only just begun to learn some of Rise to Ruin’s intricacies, but I can see there’s a lot here. It still has plenty of rough edges, but the developer releases frequent updates and is always responding to comments.

If you have the time to invest in it, I expect you’ll find Rise to Ruins very rewarding.