Narborion is a mixture between a classic turn-based RPG and an interactive novel.

In this title you will impersonate a young page serving a great Lord, in one of the many cities of a rather large and varied dark-fantasy realm. Your training is almost over, so after being victorious in a tournament, the Princess summons you to aid her in an important quest far deep into a forbidden land. This pretty classical incipit is the kickstart of your journey, that will be undoubtedly be riddled with many things to discover, dangers to overcome, but mostly a lot of stuff to read. 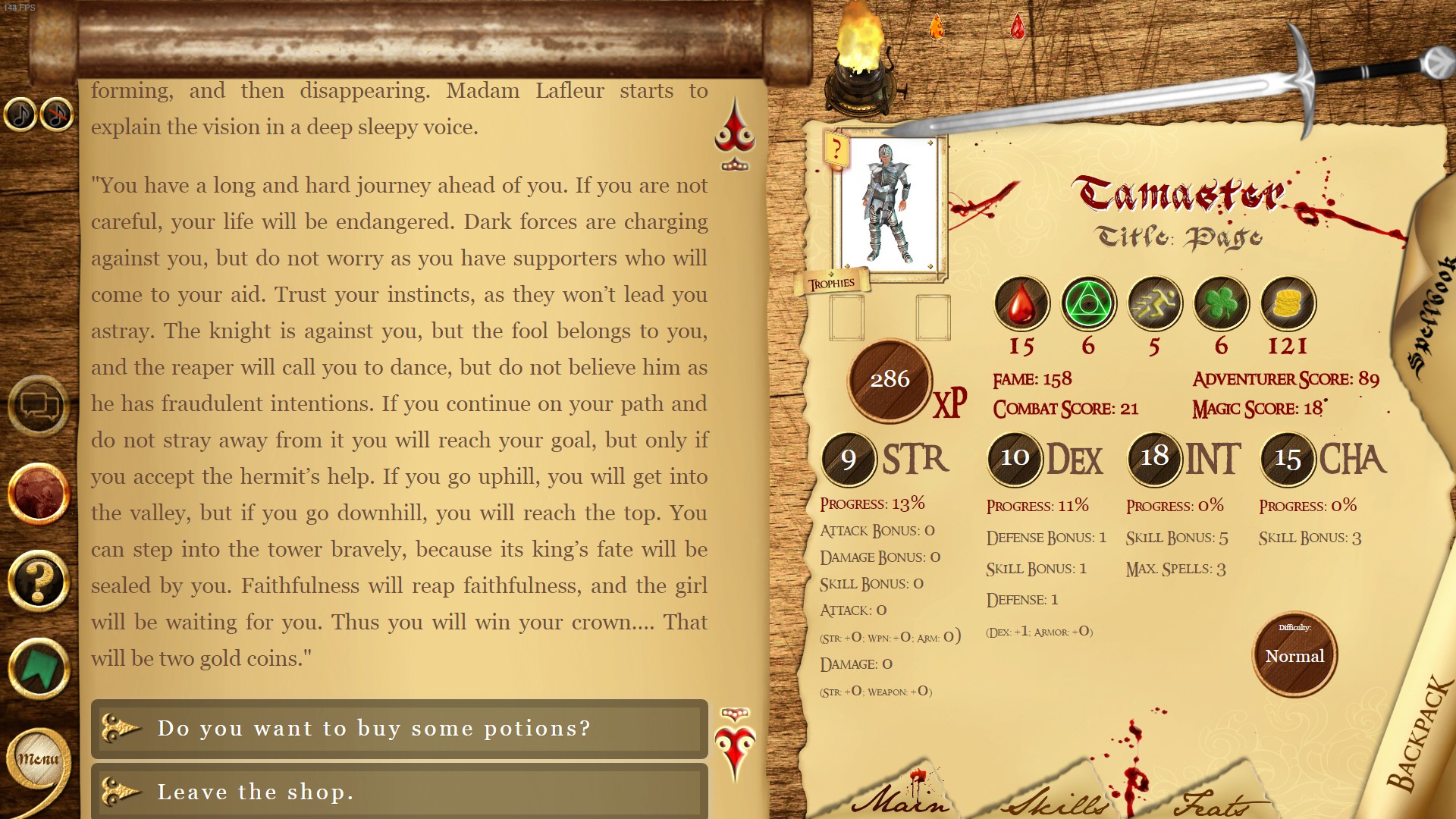 General Gameplay
After creating your character at the beginning, and having selected from a decently sized pool of Feats and/or Spells and having bought your starting Gear as you see fit, our mighty hero will be transported to the city. The main interactions with what happens in the world, and how you react to said events, are done via the text-based interface on the left screen side. There you will spend most of your time reading a very detailed description of many events and places, and then react as you see best. This game also has RPG elements, like Inventory Managing, self-explanatory, Character Progression by winning fights, performing actions or training while camping, and most importantly Checks, which are little “tests” of one or more of your attributes, like Strength or Intelligence, that will be passed or else depending how apt your character is in that feature. The developers tried to implement a very pen-and-paper like style to world interaction, which mostly works. However mind that this game is not one for those who love action or short texts, as there will be a lot of stuff to read, and also Puzzles and Riddles to solve, maybe not mandatorily, but there are. During your travels you will be able (and forced to) set camp, go literally wherever you want, explore exciting new places, meet new people, and then kill them (or not)!

Combat System
The combat in Narborion is turn-based, very basic and a bit depth-lacking in so. Each turn you will have a number of Movement Points and one Attack or Spell to use, and so do your enemies. Armor wore, attributes, type of weapon used and Feats all are important to the outcome of a fight. A massively armored knight will get a hard time rolling a good dice for hitting an unarmored enemy, while also the opposite applies, well unless you are way more experienced that your foes. On the right side in combat you will be able to see your current statistics, like Attack, Defense, HP etc. the system is done decently enough, does the job even not being the main part of the game, but it also has problems, such fights going on for 50 turns because you can’t hit, for example, a light-armored enemy while he can’t damage you because too much armor, or your character being unable to attack / move due to simple bugs. The developers apparently know the combat engine is a bit faulty and a Reset button is present to reset the field if something doesn’t work anymore.

Multiplayer
Narborion features a global chat and a multiplayer PvP arena. Sadly we have not been able to test it since nobody was there to play it. It possibly is the same combat system, just PvP.

Content
Content-Wise, Narborion is quite plentiful. There are many locations to visit, items to get, decisions to make, people to meet and riddles to solve. If you look for an adventure with a lot to do, Narborion might be your thing, but be prepared doing a lot of reading. I would say the longevity of this title can go beyond 50 hours, depends how fast you read and how much stuff you do.

Balancing
Overall, Narborion goes for a realistically depicted combat and events. Weapons will do real damage and as many times will happen, one hit is usually sufficient to kill an unarmored, untrained enemy or a medium sized beast, it depends anyway. Balancing-wise, events you interact with during the narration, or Checks, are fair enough if you have the right attributes for them, i have to say though that Luck is overpowered as it can make you avoid any danger for a Luck point price, those anyway are very scarce, hard to regenerate so i guess it is fair, to a point. I noticed prices in markets are quite high and many times even by doing everything, at least early ingame, you won’t be able to buy anything decent, so i can say money balance is not very good early on but gets better as you progress.

Challenge
This can be a quite challenging game, some fights are very tough, riddles are difficult, you will have to remember what you read in places before and then use it later to solve other stuff or determinate interactions. For some obscure reason beyond mortal compression, this game is described as “Roguelike Dungeoneering”, but features a save system called Bookmarks, from which you can reload if you die. How can it be Roguelike if you can save? 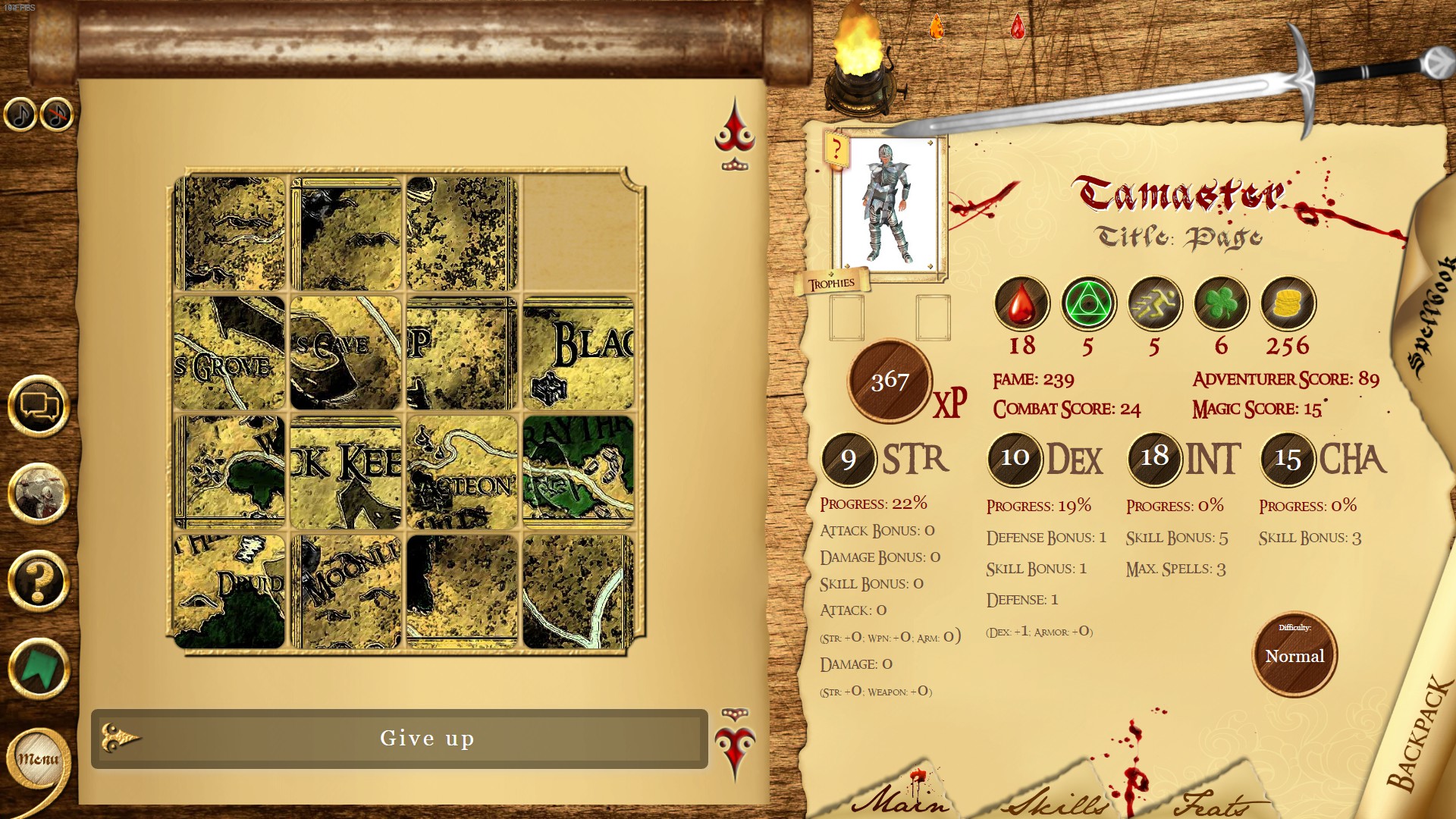 Graphics
Graphics, as you would expect from a mostly text based game, are very basic. Character portraits and models in combat are 2-dimensional drawings, done well but a little too small, artist drawings of places though are well done, as are depictions of equipments and items in various shops. UI is sufficiently well done graphically, I’d definitely say the graphical style is suitable for this kind of game, just do not expect anything out of basic.

Sound
Soundtracks are a few, when you for example enter a tavern and select to hear the Bard’s local song, you don’t, the soundtrack will be the same. Combat effects are sufficient, there is no spoken dialogue, sounds are overall barely enough to do the job but are not of good quality nor anything special. It works, yes, but just so.

Performance
You’d expect this could run on a toaster, well yes it can run on a toaster, but it still has problems in performance. When transitioning from one text screen to the next after, example, some choice, the game can sometimes freeze or take its time to load the text, which makes the experience clunky in some fragments. This so far is the only performance issue, not major.

AI
AI of enemies and allies is generally good, sometimes tho they take strange paths to reach an objective and perform mysterious actions instead of doing more efficient things they could.

Quality of Life
UI, management and panels are accessible and well-thought enough, map could be more zoomed out.

Bugs / Issues
When Steam overlay is used, the game “breaks” its interface, it can be restored by clicking around randomly, but is not very nice. Character can get unable to attack / move randomly in combat, this can be solved by reset button put there by developers. By clicking a sword on top of the name of out character in the interface, we can raise Strength and Dexterity indefinitely just clicking on it many times, this exploit is an Easter Egg put by Developers but can lead to serious exploiting, since this game has Leaderboards and PvP, I’ll let you imagine what happens next. 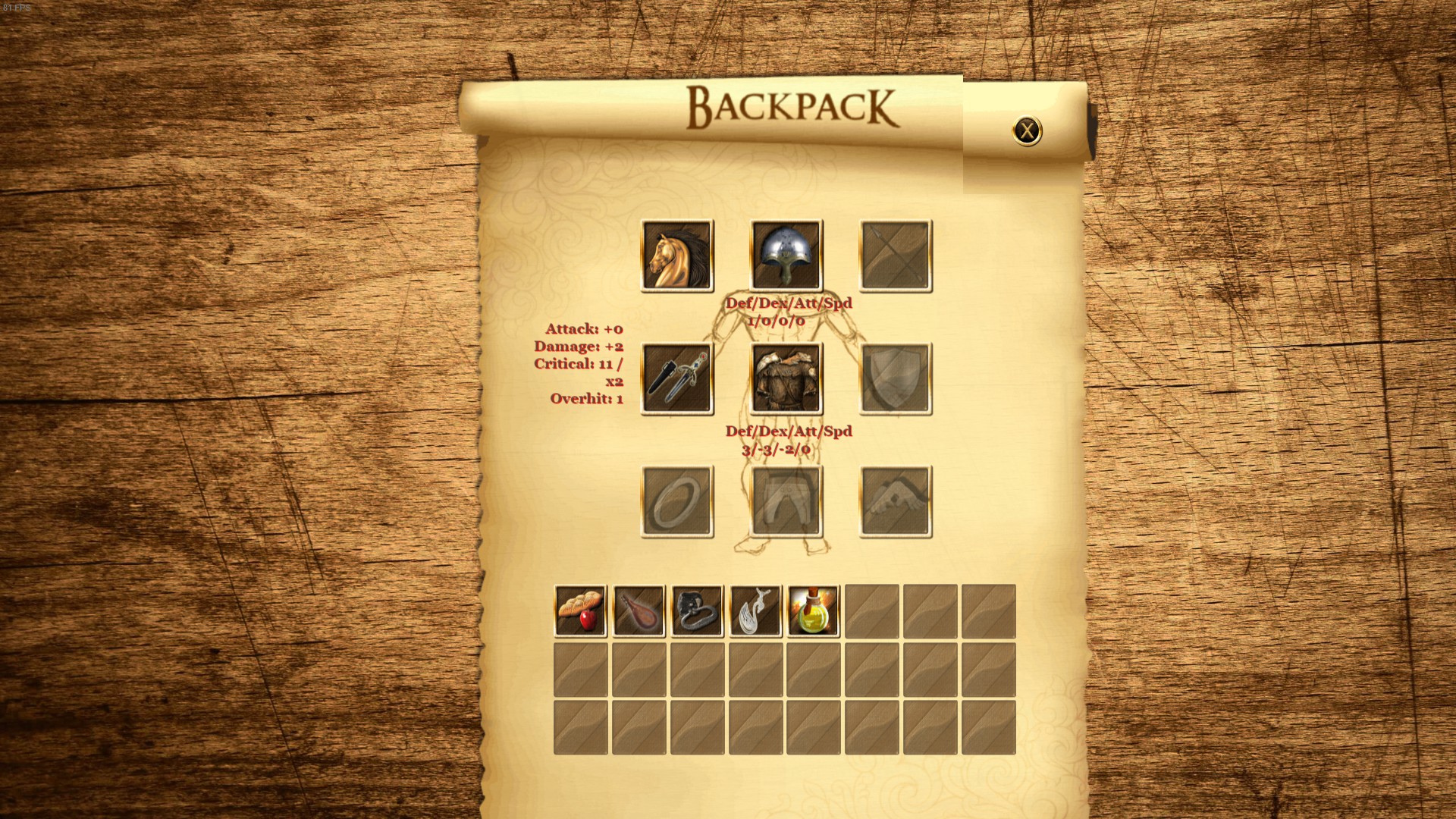 Narborion is a valiant attempt in putting text-based, pen-and-paper like experience on PC gaming, it has good ideas but also problems and inaccuracies. I’d recommend it to fantasy enthusiasts who like lots of reading, things to do, puzzles and some combat. It overall is a rather innovative title but cannot get out of the average in any case.