REVIEW: Legend of the Skyfish

Zelda plus a fishing rod, but minus almost everything else. 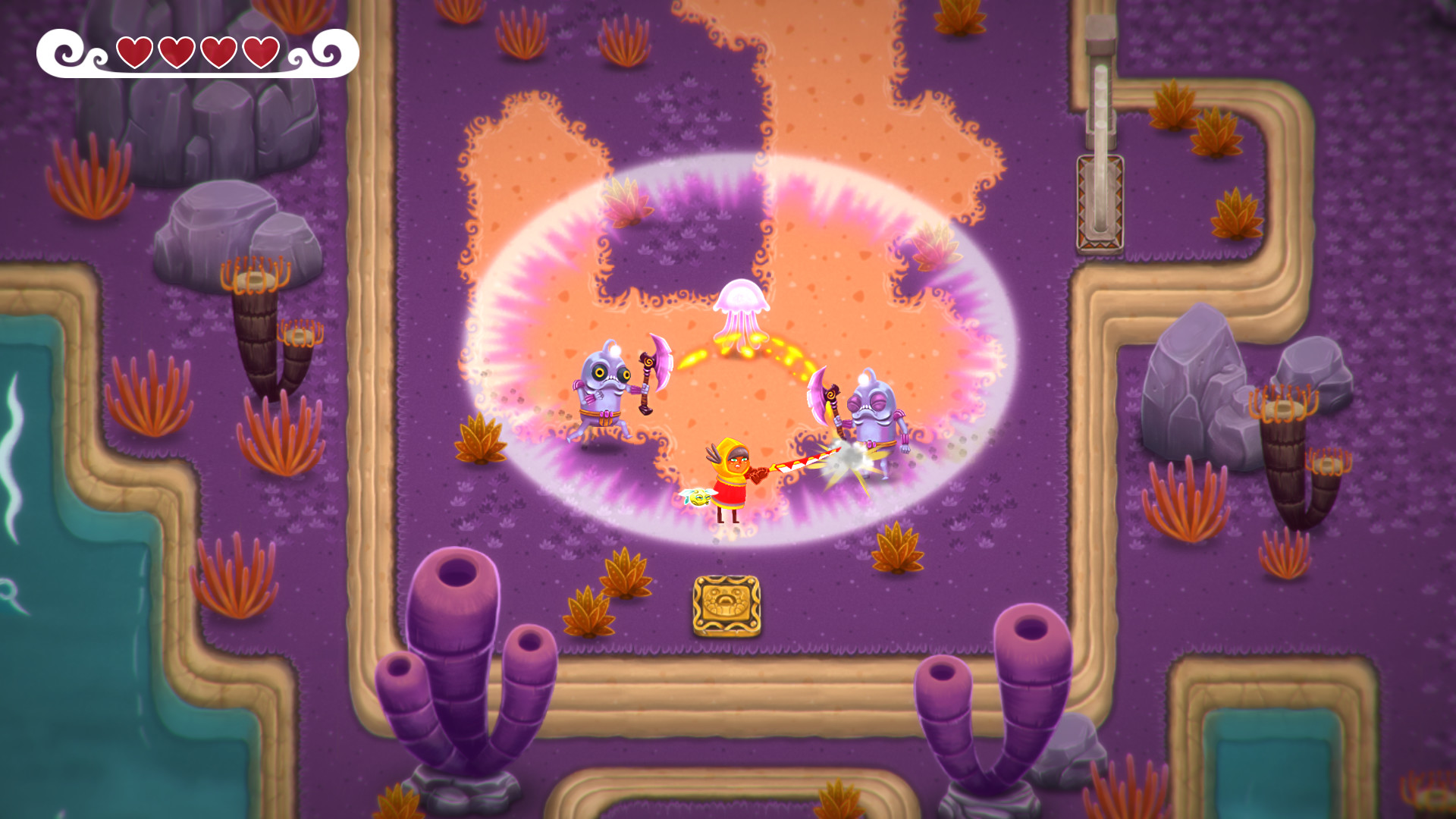 The Legend of Zelda is one of the most long-lived and iconic video game franchises out there, and like any big game series, there’s games on Steam trying to follow in its footsteps. Not that I mean that negatively, as even if a game has a clear influence it can still certainly be good in its own right. Anodyne, for example, was a great title harkening back to the old Gameboy Zeldas, and Legend of the Skyfish seems to take that route as well.

The story is described when you start the game up, and basically amounts to fishermen overfishing enough that an ancient evil is released, the Skyfish. It summons an army of fish people to give humans the same kind of treatment they gave them. Which, even though the Skyfish is supposed to be evil, doesn’t sound too unreasonable to me, but if you’re looking for a morally ambiguous plot this isn’t the game for it. A lone fishergirl called Little Red Hook is separated from her family, but is rescued by the Moonwhale, a legendary beast that aids her in stopping the Skyfish.

In order to do that, Red will have to deal with some of his minions first, but they’re protected by several empowering totems in the area they’re lording over. Thus she’ll have to journey through every world smashing the things until she can fight the boss at the end. A tough task, but thankfully she has a trusty weapon; her fishing rod.

The store page describes this as a unique weapon for a game, and to that I’d have to disagree: the fishing rod itself is a bit unique, yeah, but the function of it is basically the hook shot from several Zelda games, if it also functioned as Link’s sword. It can yank blocks forward to weigh down switches, pull in enemies and stun them, and of course pull Red over to certain blocks, which you’ll use a lot to cross between islands. Legend of the Skyfish was originally an iOS title, but it crossed over to PC pretty well. There’s no way to rebind keys that I can see, but the game is simple enough that I don’t know if you’d need to. You aim the fishing rod with the mouse, and I imagine that works a fair bit better than the touch screen on a phone.

Each level takes only a few minutes to complete, and I found the puzzles generally disappointing. Most of them are based on hitting targets with the fishing rod or pushing things onto switches, without much actual thought. There are also spike and arrow traps to avoid, but I wouldn’t really call those puzzles, and it’s possible to just run through many of them since you have a lot of health. The game has combat, but enemies are fairly ineffectual. These are all issues Zelda deals with by having multiple items to use, but when you only have one that’s used for every puzzle, it can’t help getting a bit samey unless it’s a particularly versatile tool. There are optional items you can find, but they’re just augments to the pole and don’t really change the core experience much. The game has 45 levels, with 14 to a world and a boss-only level. Those aren’t bad exactly, but they’re pretty much pure combat without any puzzles to them. It took me about two hours to beat two worlds, and thus two thirds of the game.

They’re not bad, the terrain and water look pretty appealing, and everything is easy to identify. The various water-themed bad guys you run into are decent enough, but as a main character design I found Red a bit lacking. Her animations are also pretty simplistic, such as the victory dance at the end of each level looking pretty stilted. Forgettable. There’s only a couple of tracks and none are really memorable, just generic heroic stuff. I understand why, since it’s only a phone game and obviously the people playing aren’t going to have the sound turned up a lot of the time, but still.

Overall, Legend of the Skyfish is an okay game, but it certainly doesn’t reach being as fleshed out as even the older Zelda games. A game that’s just the dungeon puzzles and bosses has some merit, but only having one tool for solving both makes things a lot duller than they could be. If you’re looking for a worthy imitator, it’s not quite this one. I can’t say it’s outright bad though, if you pick it up on a sale and don’t mind a casual puzzler you could have some fun.