REVIEW: A House of Many Doors
Add comment
Share:TwitterFacebookRedditPinterestWhatsAppEmail

REVIEW: A House of Many Doors

A House of Many Doors was successfully funded on Kickstarter back in September of 2015, and after all this time it has finally become available for everyone to enjoy. That said, comparisons to Sunless Sea seem to be unavoidable, and it seems that some people think this is just a copy of it while in fact, we can say that it was blessed by Failbetter Games. 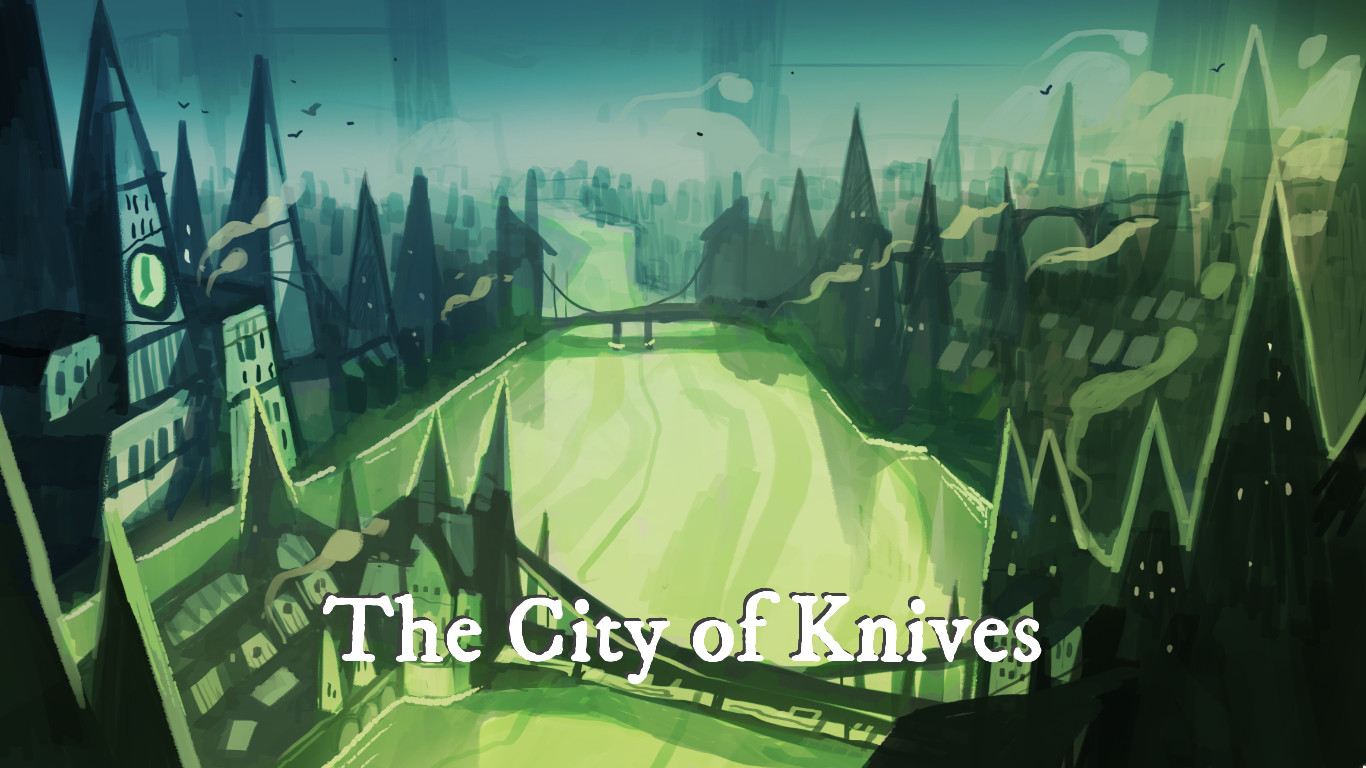 The game focuses heavily on storytelling and narrative, which shows, and takes form, in this journal of yours. Putting it plain and simple, the writing is absolutely stellar and it’s clear why Failbetter Games decided to support the development of this game. It’s one of those cases in which, as you’re reading, you actually find yourself immersed as if you were there. Every single minor detail about the environment and the scenes contributes immensely to make each encounter and the story believable and mesmerizing.

The game takes place in The House, a parasite dimension full of many doors and rooms, quite possibly even endless. The House is a dark and eerie place, full of mystery, madness and deception. It’s a place in which, if you’re not careful, you can lose your mind completely, not that most people there haven’t lost it already. That said, as far as presentation goes, it does an excellent job in portraying an actual world where everything seems to have gone as bad as it could’ve gone. The soundtrack, despite being somewhat repetitive, is very moody, spooky and it has quite the vocals, setting your mood just in the right spot for the sort of adventure you’d expect from this weird dimension. As for the actual visuals, on one hand, the character portraits and the various background art pieces are extremely well done but, on the other hand, the actual rooms themselves feel like they have some placeholders, with the kinetopedes, a mechanical train on legs used to travel across the House, being the only thing that seems to distinguish itself from the rest of the environment. 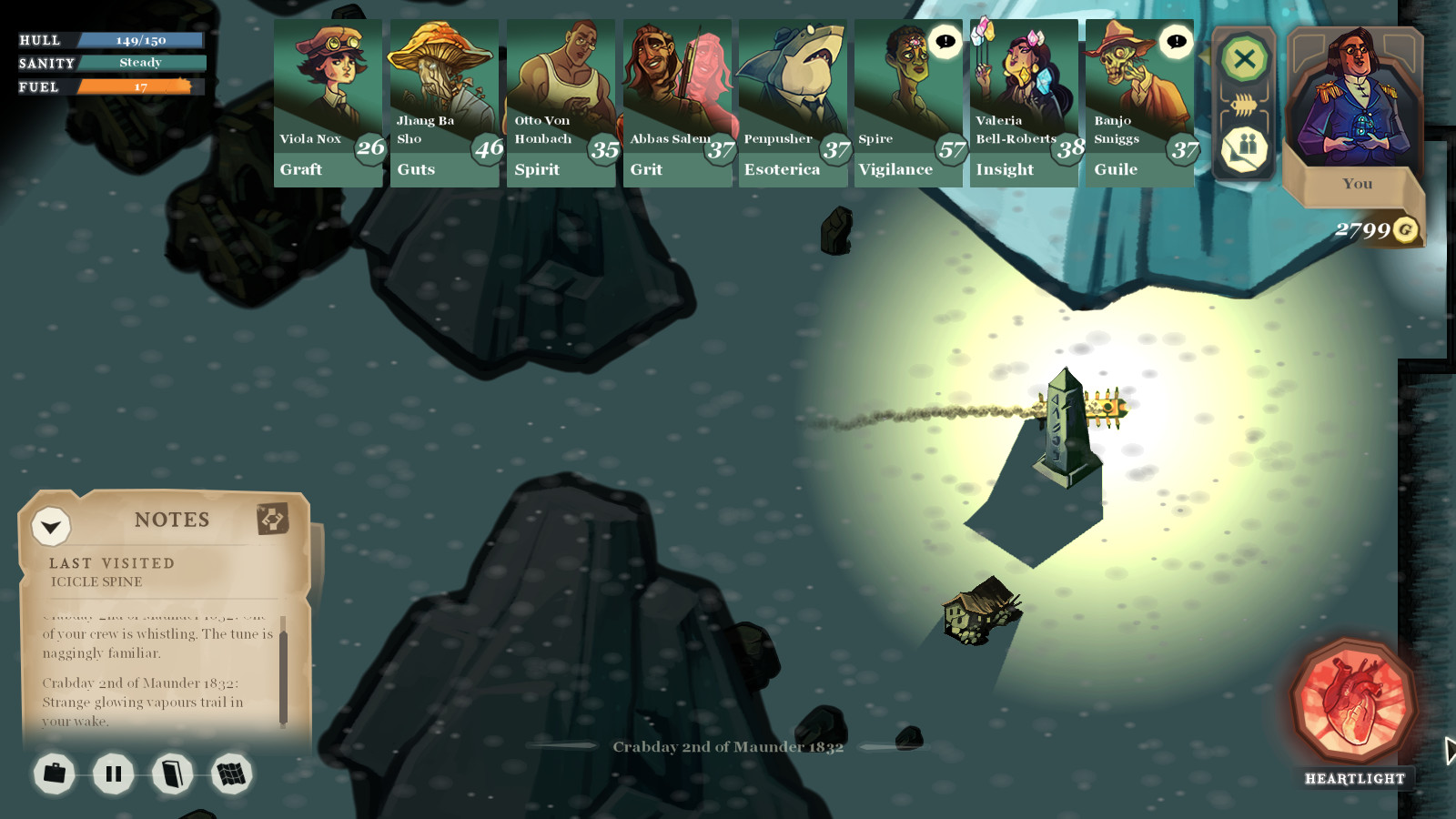 When you first start a new game, you’re given some options regarding your character backstory and, depending on which you choose, you might be able to explore certain stories that you otherwise wouldn’t be able to. In any case, despite the many side-stories the game offers and things you can do, it does have a main storyline, but that doesn’t mean that the other things are of any lesser quality, quite on the contrary. Everything feels to have its own place and it’s hard not to appreciate the effort that was put into building this entire world, from the biggest conspiracies to the smallest and most mundane things. That said, I’ll try to stick to only the first few details regarding the story which you can come across fairly early on, in order to avoid spoilers. The game begins with you waking up on your kinetopede, and you quickly learn that you were boarded by bandits and that they’ve stolen your memory from you, which is apparently something rather common on this world, and that’s why you have trouble remembering anything. Soon enough you learn that you’re a keybearer, someone who was born holding a key in their hands, in the City of Keys. These keys are supposed to open one of the many locked doors of the House but that is an arduous task, so that’s why your initial goal was to explore the House, in an attempt to find a way to escape this forsaken place.

As you travel, you’ll be controlling your kinetopede which is a fairly simple thing to do, the W and S keys make you go forward and backwards, respectively, and A and D are used to turn left and right. Besides that you’ll only be using your mouse to navigate the menus and select things, including in combat. While moving around happens in real time, interacting with something in the world, such as a ruin, will trigger a narrative window, thus pausing the game. In the same way, when engaging another kinetopede in combat, the game will switch to a side by side view, similar to FTL. Combat is turn based and in each turn you can only perform a certain number of actions. However, each action isn’t performed as soon as you issue its command, instead you queue up your actions and, upon ending the turn, these actions will be carried out. Things like moving a crew member, aiming a weapon, advancing, falling back or boarding the enemy using an action point. That said, you can only fire your weapons if you have a gunner on the weapons bay and you need to be close to the enemy in order to board them. Overall, I really like the way it plays out, the visuals are very minimalistic here but they are functional and allow you to distinguish different crew members’ functions so I can’t really complain about that. You can also customize your kinetopede by changing its engine, armour, legs, weapons and increasing its cargo capacity, and upgrading these components is pivotal to survive on the long term. 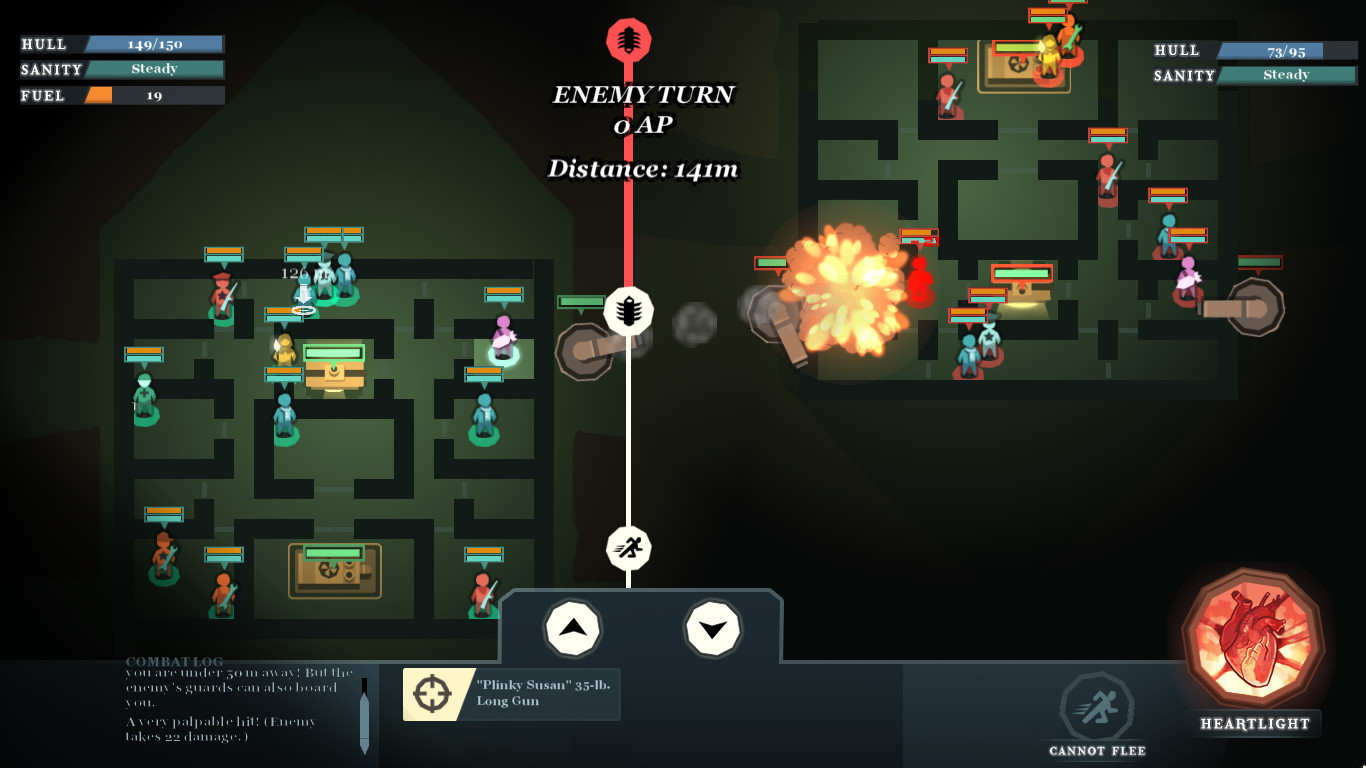 As you travel, there are random events that can occur, such as someone from your crew finding someone amongst the cargo who wasn’t supposed to be on board, and while these events tend to be pretty exciting the first time you come across them, as you keep playing you’ll find yourself just repeating some of these, which can make the game feel rather lacking in content. When you’re out on an expedition, one thing to keep in mind, besides your fuel, is your sanity, which gradually decreases. The lower your sanity level the more you’ll start experiencing unnatural things, if you can call them that. All I’m going to say is that it’s somewhat likely that you’ll be jump scared at least once or twice if you happen to come across any situation in which you are low on sanity while traveling. You’ll also start seeing things, your vision will become distorted and you’ll begin hearing all sorts of weird sounds and noises which creeped me out every time, even after hearing them a dozen times.

There are various locations which you’ll discover and visit and they are truly unique. These tend to have a fairly decent amount of things for you to do, such as looking for new crew members, wandering the streets while waiting for something exciting to happen, listening for gossip or delving deeper into certain stories. Usually you’ll find yourself faced with challenges, either while you’re traveling or when in a city, and your success on completing these depends on your stats, but still, the game will let you know if your success is likely or not, even if in the end it’s pretty RNG. Despite cities only being visually represented by gorgeous static 2D backgrounds, you can learn more about each of these locations and you start to form your own mental moving image of these places. Visit places like the City of Angels, where angels watch the city’s inhabitants from above in search of abominations, or visit your hometown, the City of Keys. Here you’ll find your dwellings, a place where you can hang with your crew mates, write poems or even take a vacation. Each place is exquisitely unique and has a story to it which I very much find worth delving into. 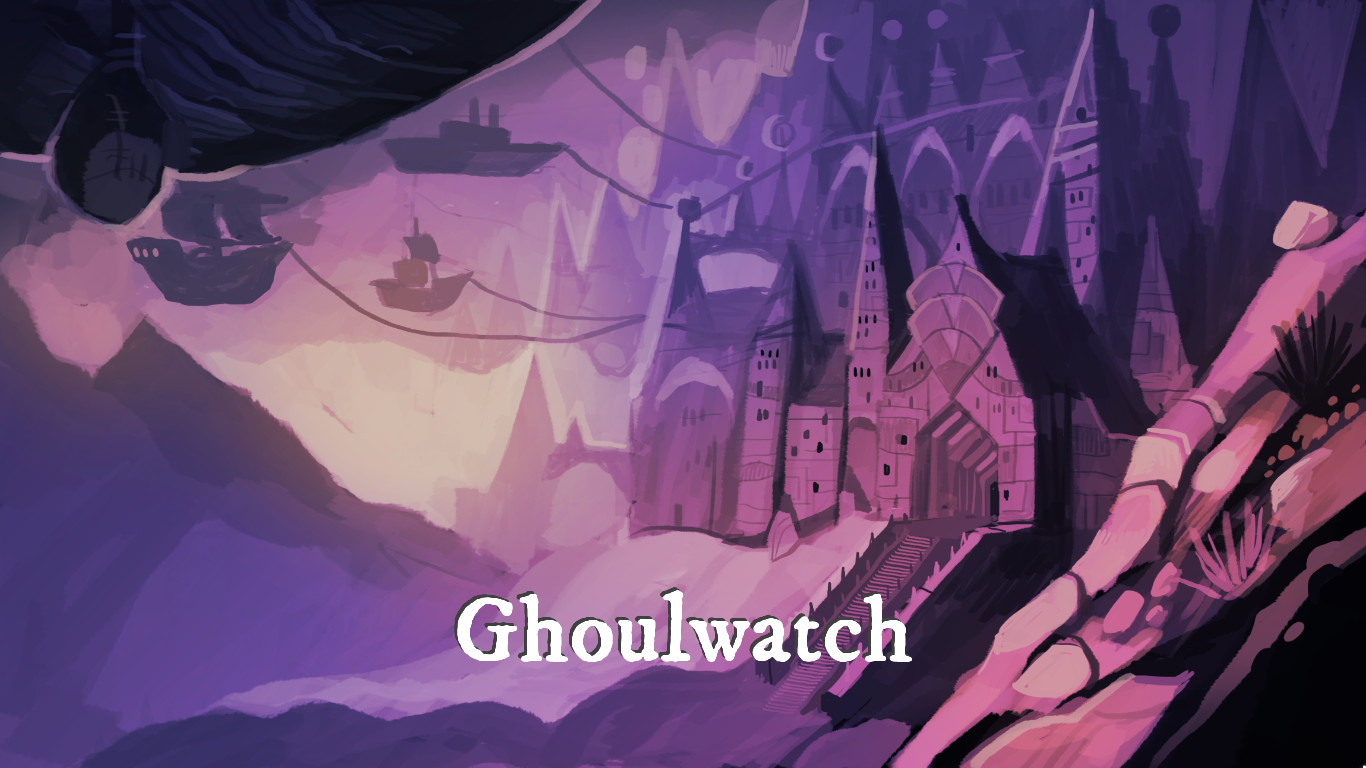 A huge part of the game also resides within your own crew, which is divided into two, the upper deck and the lower deck crew. The upper deck crew is composed of important characters which you can only have one at each major role, and you can talk to them in order to learn more about them. On the other hand, the lower deck crew is pretty much composed by grunts, and these will help you during combat by performing various tasks and provide you with stat boosts, but you can’t interact with them in the same way you can with the other major characters. That said, interacting with your crew is vital to improve your relationship with them and provides many insights regarding the game world and its intricacies. However, engaging in certain topics requires apprehensions, which you can gain by visiting new locations, for example. These are required in order to progress through the main story, but you can also invest them in improving your stats or talking with your crew members, which usually provide some really unique story about each one of them. In the end, all this contributes to giving some sort of life to the insides and the people who accompany you, and it shows that not everyone is as twisted or as nice as they might seem at first sight.

Overall, I only have one minor complaint regarding the game, which is the fact that, while you can save pretty much anytime you want, if you save when you’re outside a city and if you load that save, you’ll spawn back at the last city you’ve visited. Essentially you won’t lose your progress but you’ll have to make your way back to where you were, which can be a bit annoying. The only reason I can see why this is the way it is is to avoid reloading a saved game after losing a fight with an enemy for example, but still, I wish there was an option to disable that. 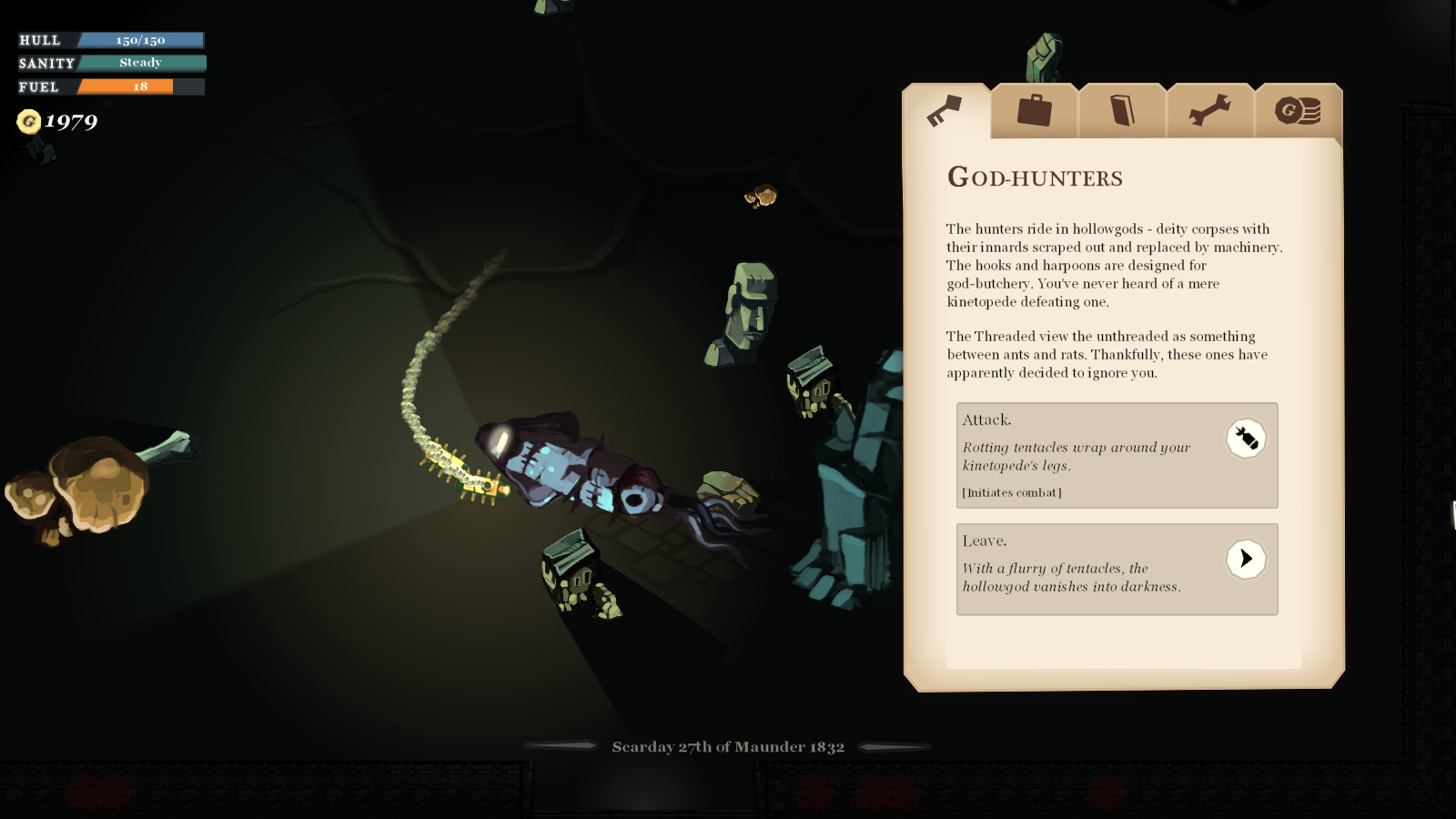 This game has plenty to keep you entertained long enough to find your money’s worth and I could spend hours talking about the different ways you can play the game, as a bandit or a smuggler, about the tiniest details and mechanics that add a whole lot of character to the game world or the way cities are so different from each other in terms of their society, politics and religion but, in the end, I feel like I still wouldn’t be able to do the game any justice.

A House of Many Doors manages to be extremely fun, engaging and immersive, challenging, scary and terrifying, all at the same time, and I believe that’s where you can see its true beauty and uniqueness. Considering its price point and everything mentioned above, I can’t possibly recommend this enough, and that’s why I’m giving it a SAVE rating. It’s a very good game, and while some probably won’t enjoy it, I’m sure others will absolutely love it to death for what it is.