Switch is a hard-as-nails puzzle platformer. Let me repeat, it is HARD!! 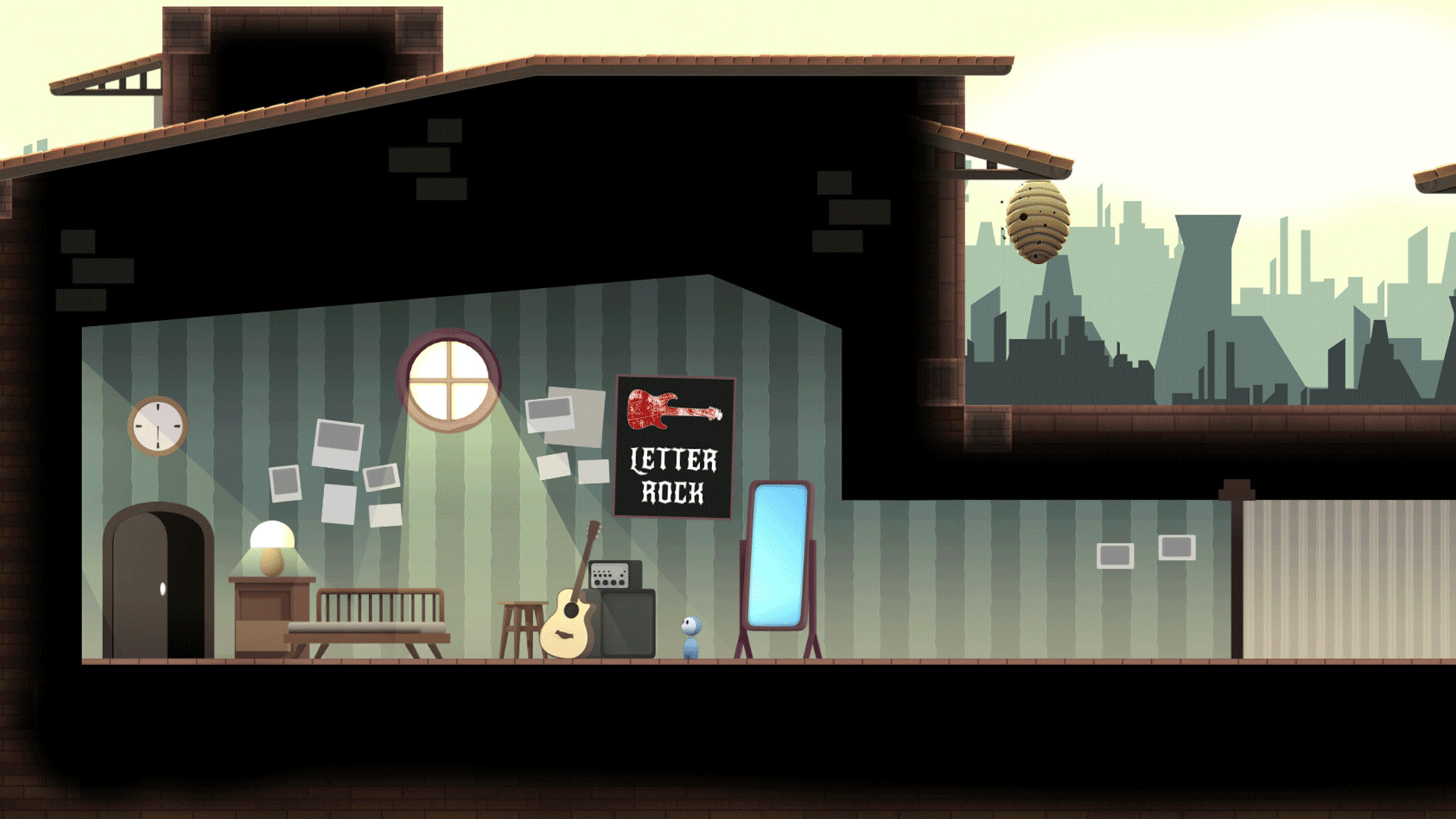 It’s possible to play with keyboard controls but not even God himself could beat these levels with the keyboard. Controller is an absolute must. It’s fullscreen only (fine with me) and Windows only (not so fine – Linux would be nice).

I’m now going to attempt to explain the switching mechanic. Please bear with me. You start off as the little skinny guy who can jump with the A button. So far so good. Now, if you press B (or in my case RT which I prefer) you then ‘Switch’ into a fat guy and can then jump again in mid-air to gain extra height. Once you’ve completed a double jump (and not before) you can then scale a wall, Meatboy-style, by alternating between the two buttons. If there’s a narrow vertical gap then the alternation is not necessary, you can just jump with one button. Now, the Switch mechanic does not only affect your guy, oh no, that would be too easy. It can also affect elements of the level, causing them to disappear and reappear, so you have to jump/switch at only the right moments as things change all over the place. Are you still with me? Hang in there. So next we have the shooting (X) button which you will often need to use in conjunction with your jump/switch buttons to shoot things in mid air to get rid of things or reactivate them before landing on the edge at the last moment and then quickly adapting to climb the block you’ve just activated… I could go on. 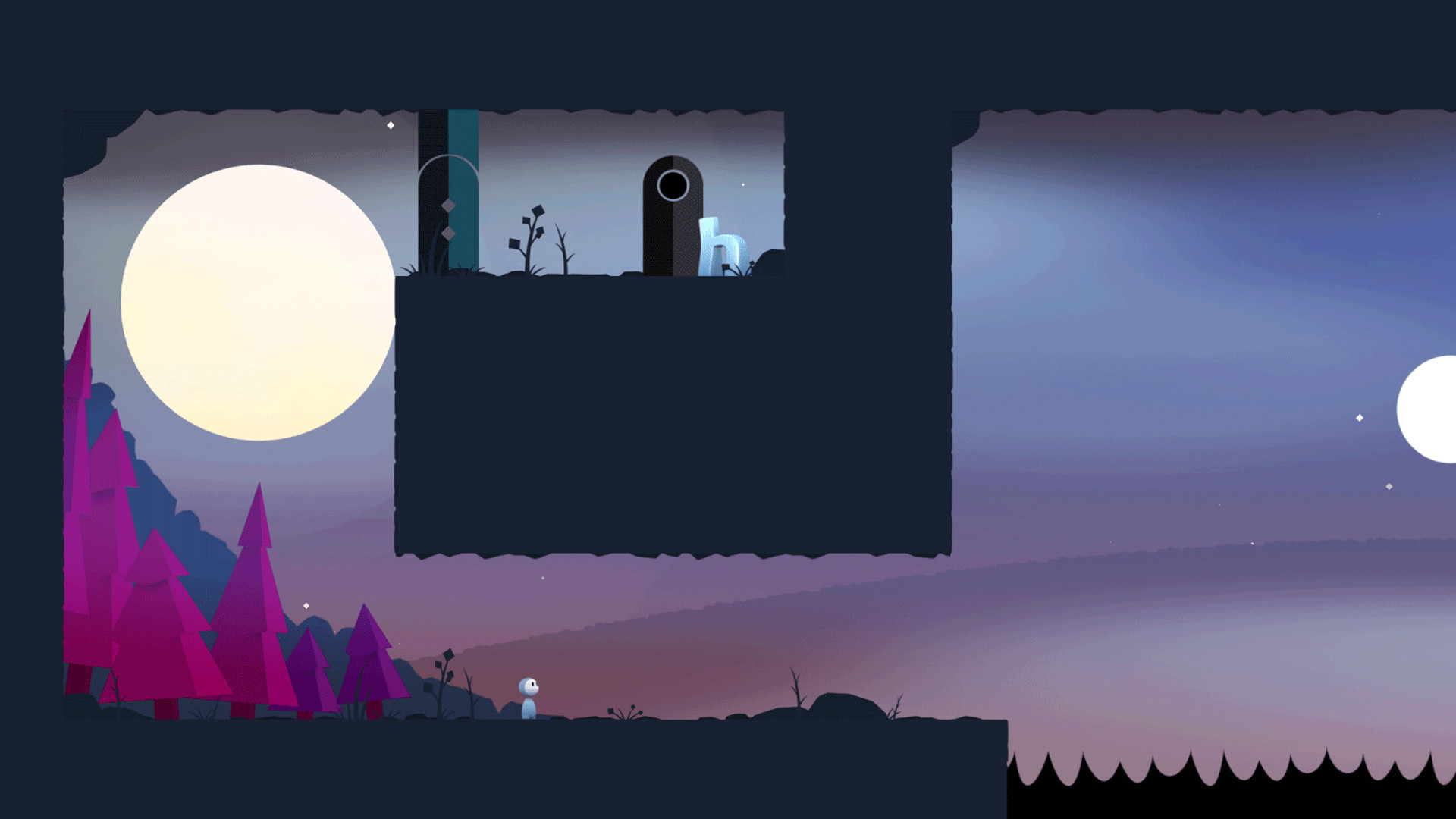 Confused? So you should be, it’s as complicated to use as it is to explain. After hours of gameplay I still can’t honestly say I’ve become comfortable with it, it still feels unintuitive and is part of the challenge.

The level overview is not just the usual static list. Your little guy hops along from doorway to doorway to enter the various sections and then hops between the lines and pages to select the one you want. The levels all have fabulous names. My favourite is ‘Wait, What?’ – I think this could be applied to many different levels here! 5 sections with 15 levels in each, 75 total. 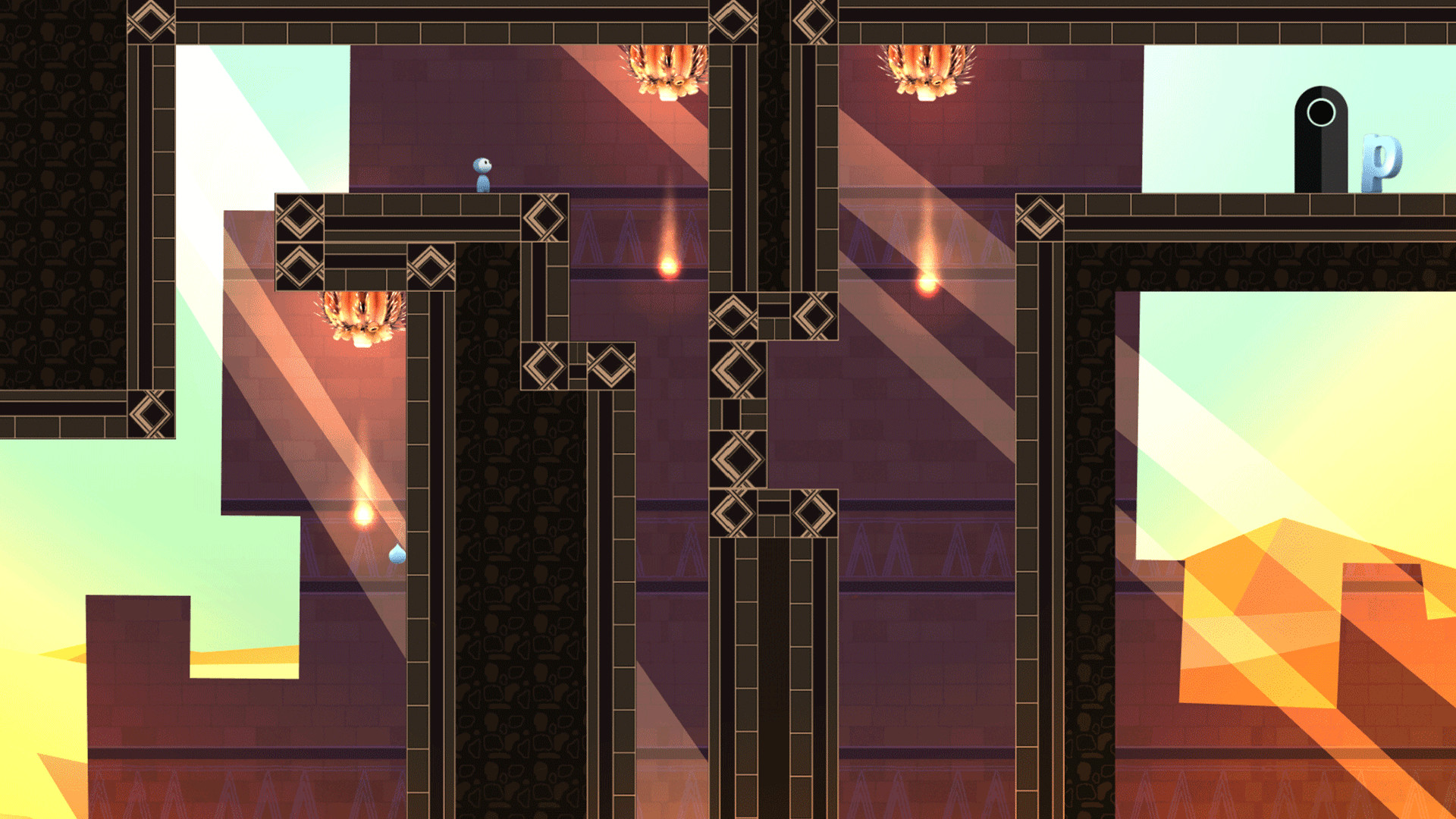 Artwork is slick and beautiful, with pastel colours and clean lines occasionally enhanced with a fancy element like fire cannons. There’s a different background tune for each section and I love them all.

There’s a 3-star rating system. Beat the level any way you like for one star, collect the water droplet for 2, beat the time limit for 3. If you get the droplet and beat the time all on the same attempt it declares “Excellent!” but trust me, this ain’t gonna happen except for a few levels in the Beginner section. You’ll be trying for the droplet first, then trying for the speed run without the droplet to collect the stars one by one. With that said, you’re already doing well if you can get one star. 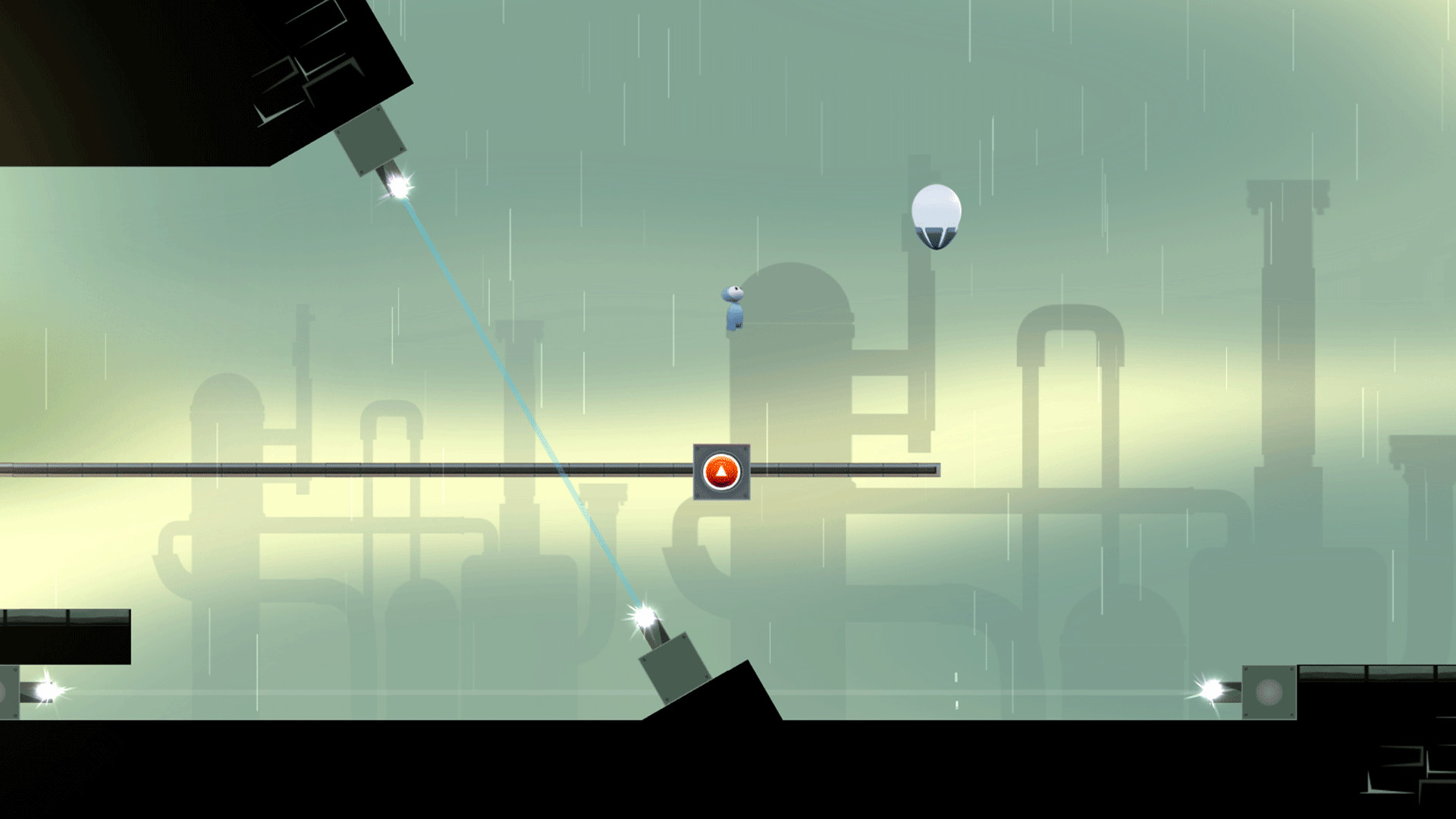 Section 1 – Beginner – is the only section that gave me any mercy. Once I was into the 2nd section I was already out of my depth. The difficulty comes at you from two angles – puzzling and platforming. Some keep you sitting there scratching your head wondering how on earth this is even possible, for others I could see what to do but repeating/dying over and over and over, inching my way painfully forward as my brain memorised each separate action and repeated it with pinpoint timing.

It’s not only the level designs that produce the difficulty. Most other platformers use 2 buttons – jump and shoot. Here you have jump/shoot/switch that adds yet another layer of difficulty to an already tough challenge. It’s fiendish!

On the flip side, beating a level in this game gives me a huge rush, it’s a proper challenge. 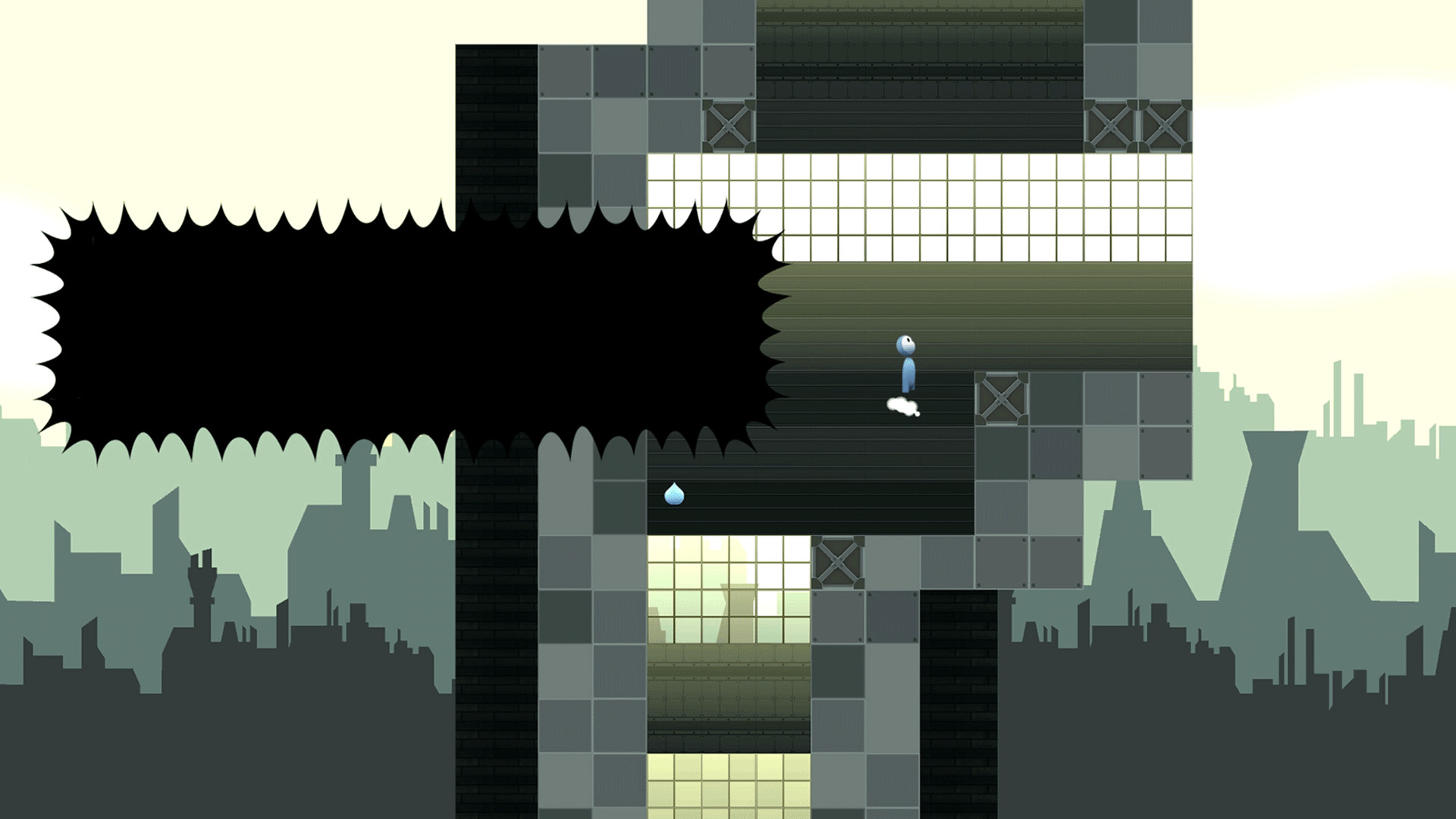 Many of the games I play – and puzzlers are especially guilty of this – have linear level progression. Everything is locked and you progress one level at a time. If you get stuck, you have only one level to work on and it can get frustrating. Here, you can play any level you like at any time. I could hug the devs! Of course, it’s better to play the earlier/easier levels first but it’s entirely my choice, as it should be. 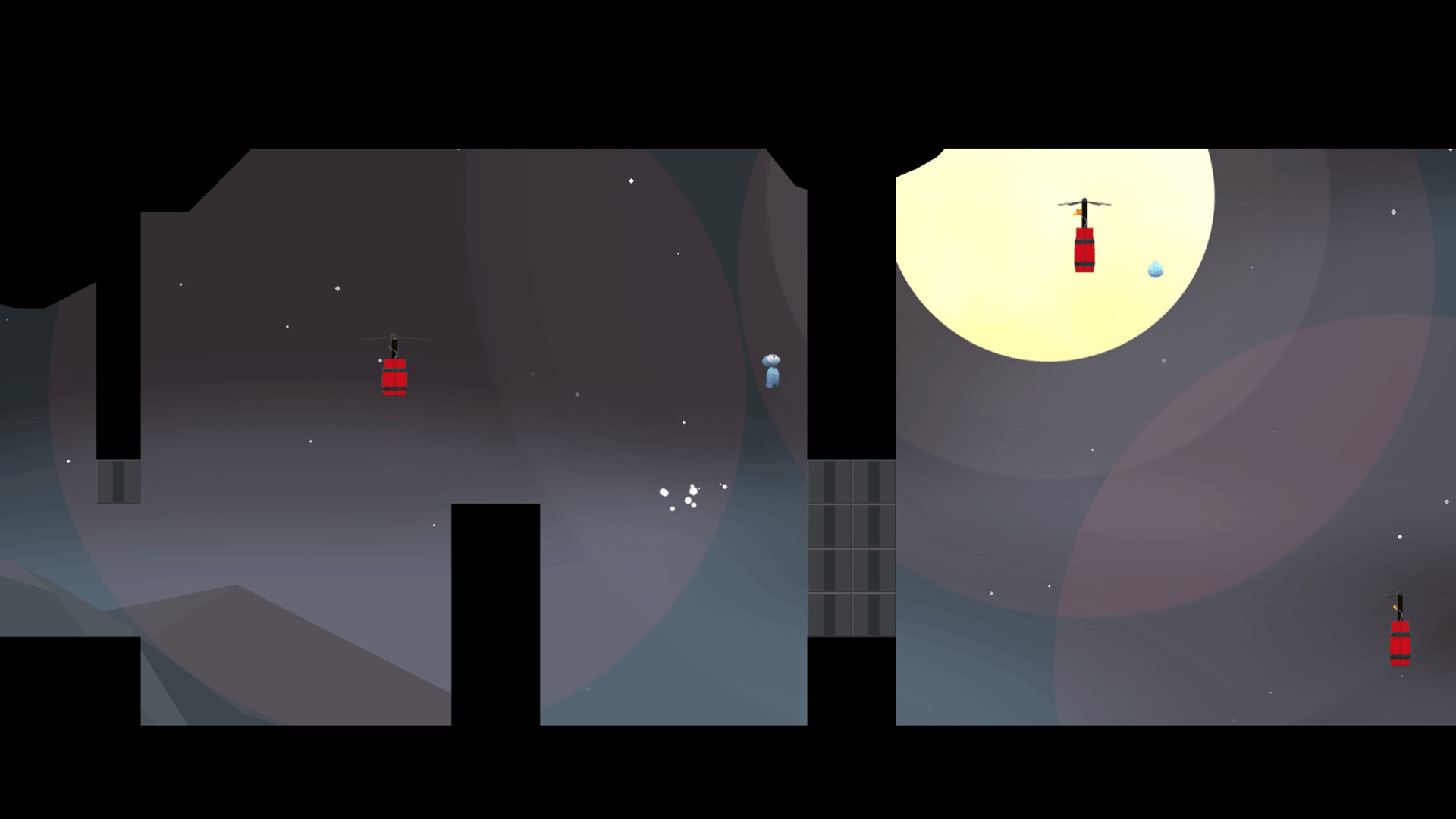 I’m writing this before release so I don’t know the price. I’m going to take a guess and say $15, that’s what I’d be happy to pay for this. Any less and it’s a bargain. There are many hours of gameplay and the star ratings allow for plenty of replay value.

Steam cloud supported but no achievements or cards. I don’t think it matters, there is more than enough challenge here without achievements.

Every aspect of this game is first class. If you can ever complete it, even with one-star solutions, you can count yourself an expert. Highly recommended.