REVIEW: Through The Mirror 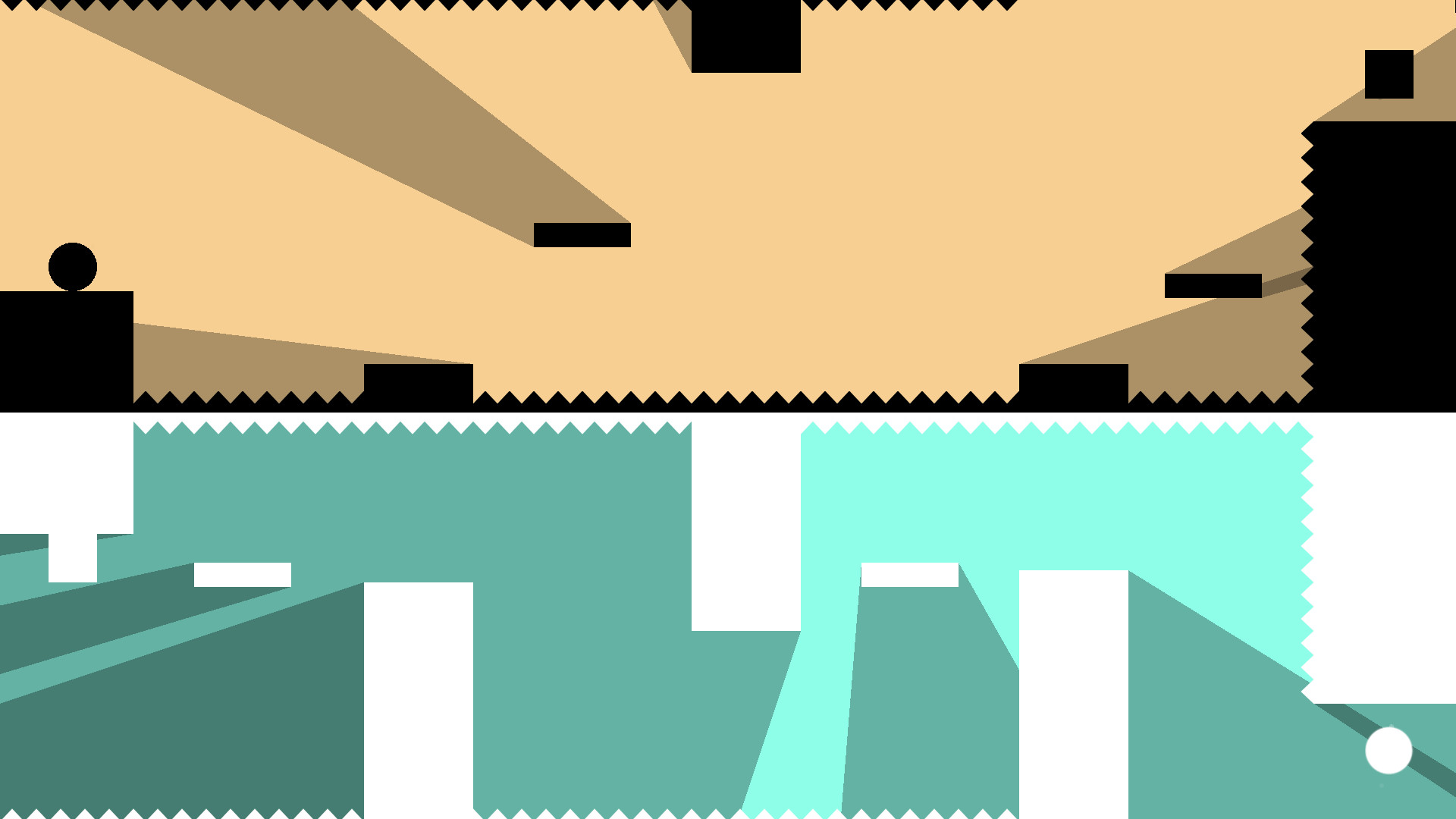 You have two separate platform levels on the screen, mirrored against each other, and you control a circle and square moving at the same time but in mirrored (or opposite) directions. The trick is to focus on each alternately as you jump and land. It’s not always possible to refocus quickly enough, so you find yourself memorising the level and then concentrating on only one character, landing it on thin air in between its own landing points. Whenever possible you try to focus on the side with ‘normal’ movement, and when it’s necessary to watch the ‘mirror’ side it’s a good idea to make a few small practice left/right movements to prepare your brain for the next jump.

That sums up the gameplay really, there’s not much else to describe. 3 achievements (one for each 9-level section) of which the images are currently broken; no cloud; no trading cards; Windows-only.

The first half of the game is quite easy but then it does get tougher. I don’t think it strays into rage-quit territory because you do always feel it’s fair and possible to beat if you make enough attempts.

This type of game is usually expected to have timers and/or some kind of optional challenge within levels in order to produce scoring which can then be put on leaderboards. Nope. 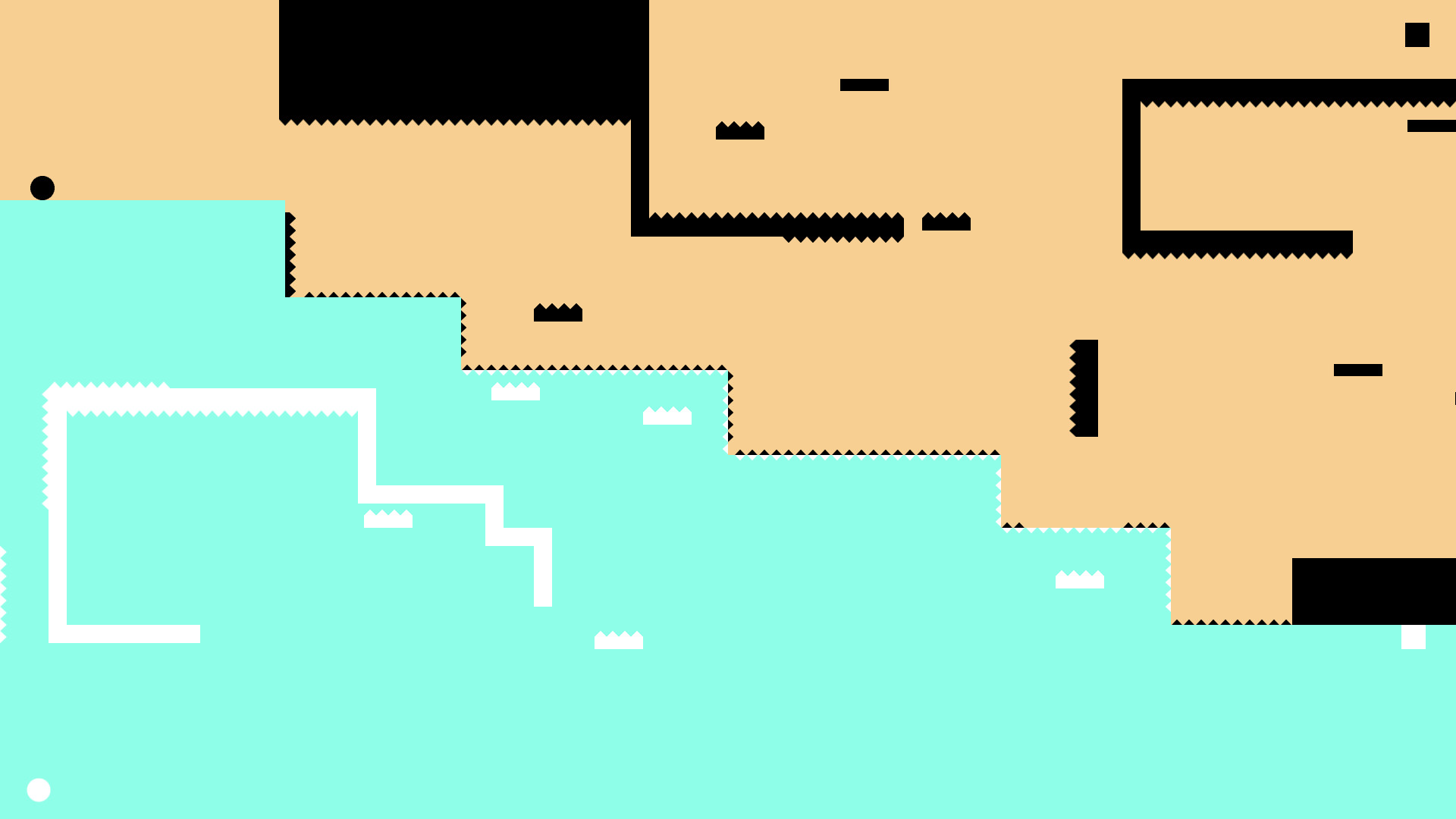 There’s a fine line between minimal and low-effort, and I’m afraid this game is dangerously close to the edge.

I’ve played many games with minimal design that were pleasant to look at. All it takes is some subtle touches to give it a personality, perhaps a small animation or a few decorative shapes. What we have here is crude black spikes and platforms with some basic shadows occasionally and that’s it. Completely devoid of any style, originality or finesse.

Music switches between 3 tunes (as far as I can identify): piano, harp and some electronics. Each has a very short repetitive loop and it becomes irritating, especially considering the absence of volume control. I’d rather listen to my own music. 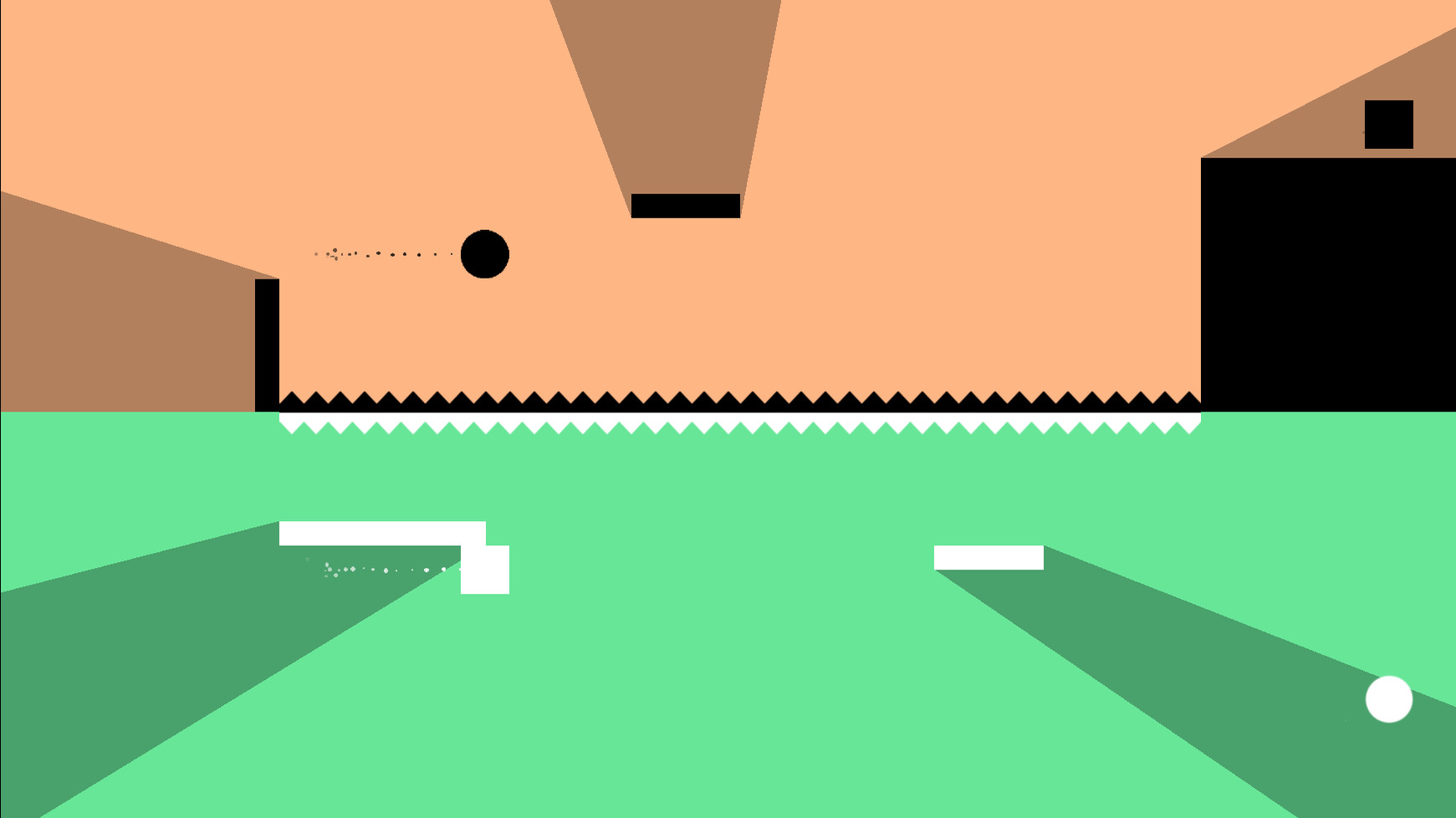 From a level design standpoint this is nothing more than two rudimentary, generic platformers bolted together. On their own merits they would not see the light of day on Steam. It’s only the mirror concept that makes it interesting.

Aesthetics of the menu layout look even worse than the levels. You can’t use the controller to switch between options, you have to reach for the keyboard to move up and down. No volume control, it’s either on or off. You can choose windowed but it’s a fixed size, almost the same as fullscreen, with no way to resize or even move it, so the only real option is fullscreen.

At least it didn’t crash. I was half expecting it to, considering the overall clunky, slapdash programming. 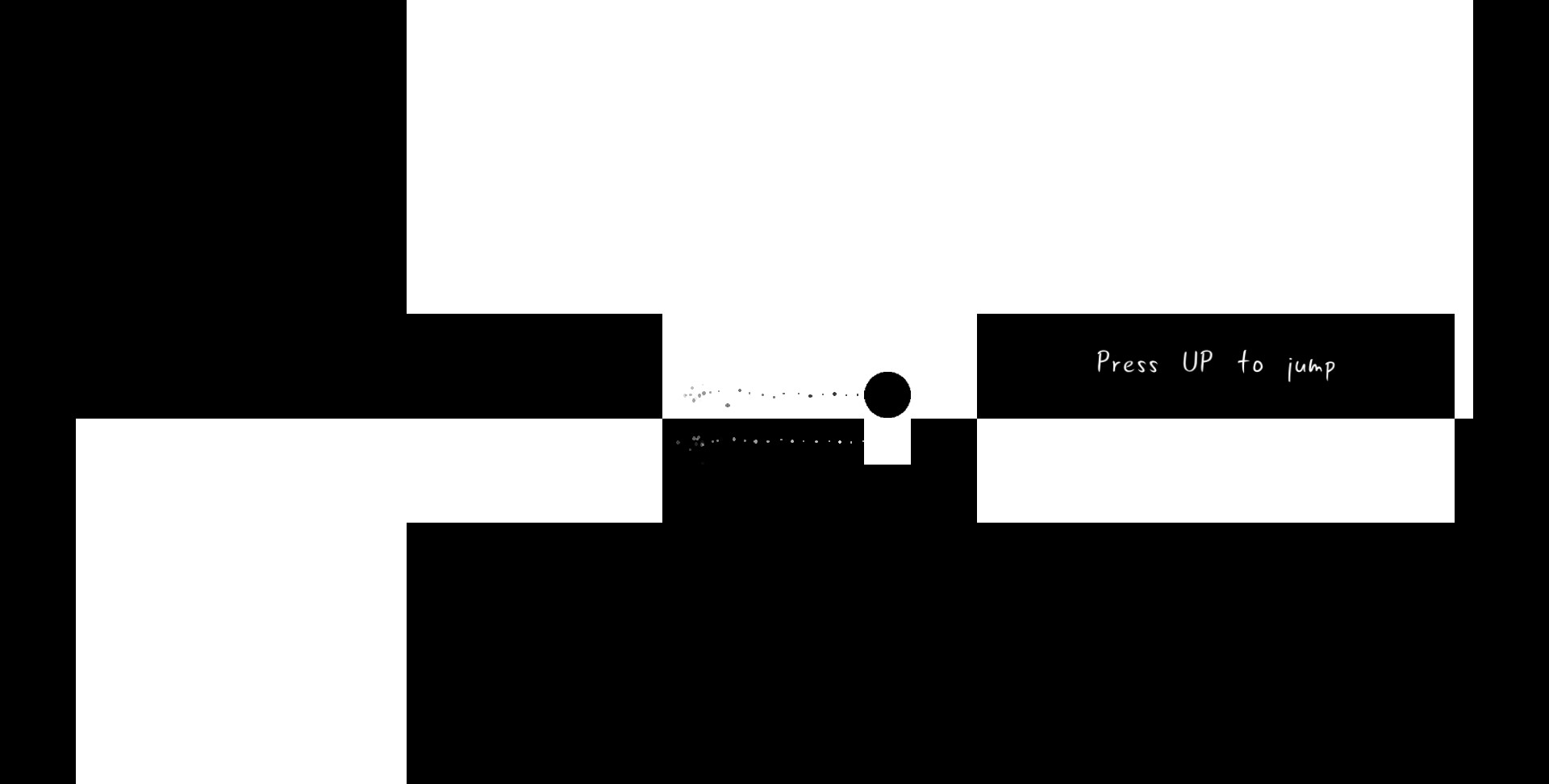 The price tag is outrageous. This is worth $1, or $2 at a stretch. The short (27 levels) play duration is probably a blessing in disguise though, as the novelty of the mirror mechanic will surely have worn off by the time you’re done.

There is replay in the fact that you have to attempt a level multiple times to beat it, as with any platformer, but once the game is completed I don’t see any reason to replay – there are no extra elements or speed runs to go for. 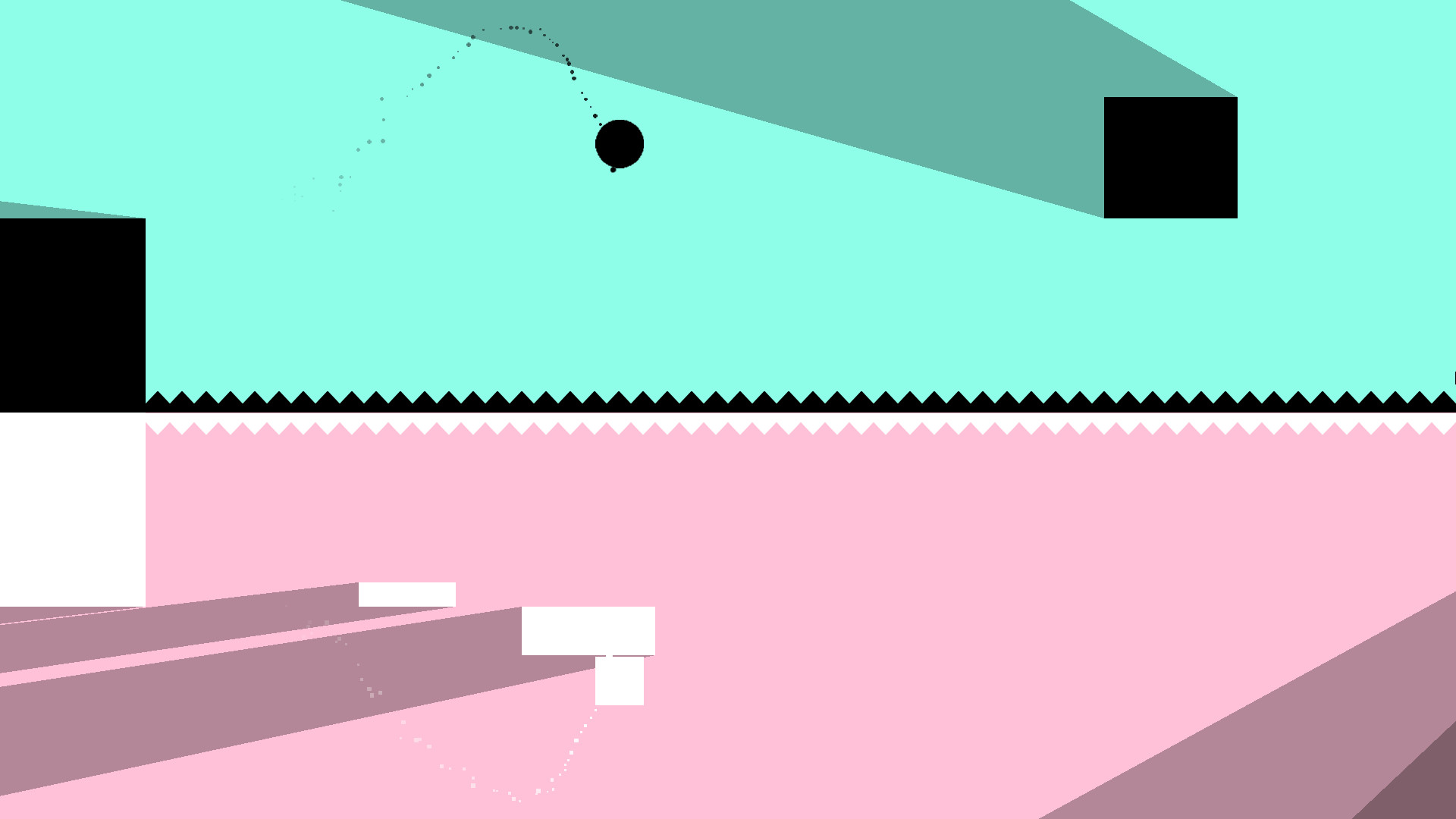 By now you may be wondering why I’ve given a positive rating. Well, despite my unkind words, the mirrored gameplay does manage to hold up against the sloppy execution. It’s certainly playable and challenging enough to forgive the other disappointments… up to a point. I would recommend it but only with a heavy discount.