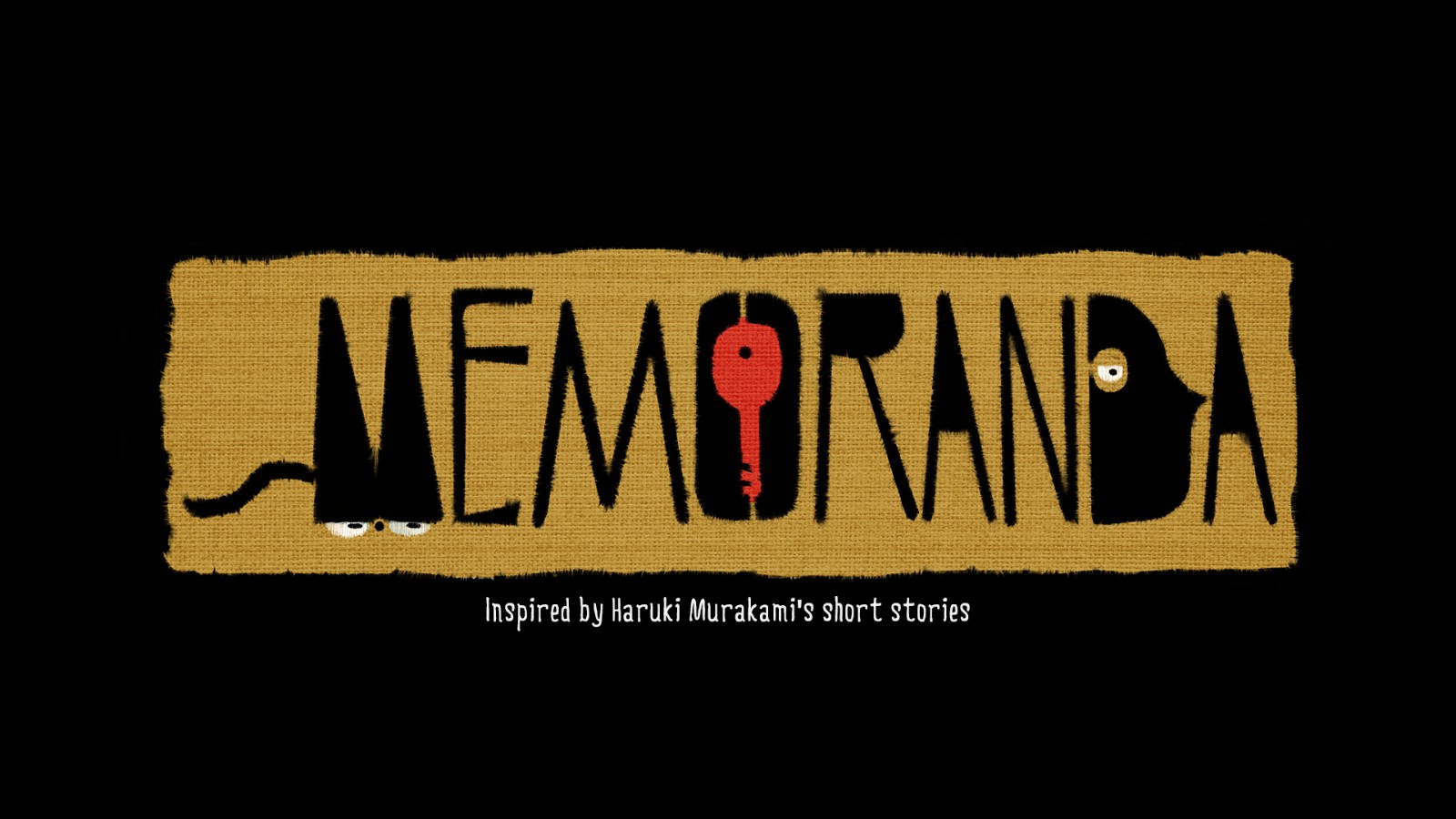 A new point and click game has entered into the ring. With a main character that can’t remember her name, in a surreal world. Based on Mirakami Haruki’s stories, let’s see what Memoranda brings to the table.

You play as a young lady named Mizuki, but she doesn’t know that. Mizuki lost her name seemingly way before you came into the picture. What can be worse than not remembering your name? Being plagued with insomnia that brings in a sailor to scare her into staying awake. Go through the small seaside town as Mizuki to socialize with the various odd balls, help others, and search for your name. 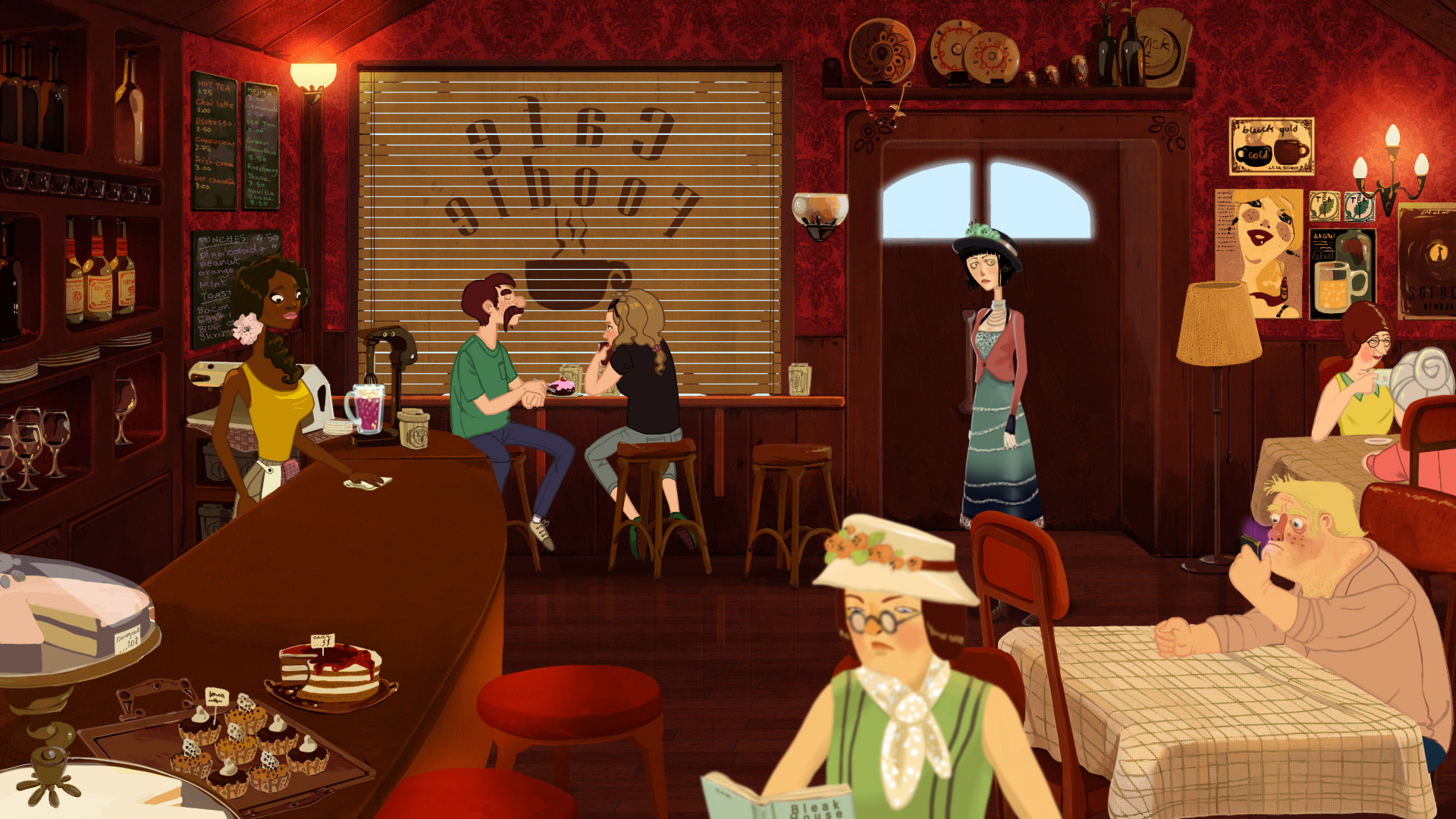 Memoranda has many plot points that come and go, but only two seem to be complete: finding Mizuki’s name and solving her insomnia, of course. Though I do have a complaint with finding her name. It shows up in the subtitles so if you are used to putting games on subtitles it is immediately spoiled as soon as Mizuki speaks. If this is one of the mysteries, you shouldn’t spoil it in something as small as subtitles. As Memoranda is based on Mirakami Haruki’s stories, I searched to try and find this content. I could not find a certain one, but found that it was based on several. I’m not sure if those who are familiar with Haruki’s stories will get some plot points better, but it did seem they just end after a while. If you don’t need the character anymore, there’s no need to go and see how they are or complete their plot point that was brought up. It felt like it was to wink at the fans at some points.

Playing through Memoranda brings out a light and delightful aura. Nothing is rushed in terms of the story and there are no constraints other than items and events happening after a certain threshold. It advertises as a game where you go around in a seaside town trying to piece together a girl’s memory and does well in bringing that atmosphere.

If you ever played a point and click game, it goes without saying that Memoranda plays the same way. There are only a few changes such as not being able to walk faster after double clicking. There was also this weird thing with the map being on the “tab” key that threw me off. This is a small thing, but it did cause some confusion as the map is needed to travel. While it did allow me to look at the journal, I didn’t seek to read what Mizuki wrote until I tried to find where photos went after you took some. It felt unnecessary to look at as it doesn’t really give any hints you don’t already know. The town is sectioned off, not revealed till a certain task has been completed. This helps in knowing which area has the necessary items in the beginning. Not bombarded with everything at once, but in handfuls. However, I do want to say that while the map looks like you will just warp into your home, it warps you into an alley that it’s a part of. It can be easily missed, as you are only forced to go back a couple times, especially since it contains a part of a puzzle later on.

The gameplay can be around 3 to 5 hours, but the puzzles make it last longer. The logic that goes with the puzzles does not make sense most of the time. While the town is supposed to be surreal, the player still needs to find logic if puzzles are involved. I go by a “Aha! or What?” with determining how effective puzzles are, and it was mostly a “What?” in Memoranda. Don’t get me wrong, some puzzles, or steps of the puzzle, did make sense some of the time. However, the progress is always halted by the puzzles bringing the game to a slow pace. Most of the time, the item or area was hidden so well that I couldn’t see it or thought it was nothing. I was fortunate enough to find a guide but I do see many people quitting after spending hours on one puzzle. Memoranda looks great in how the world is designed, but the puzzles are a weak point that should not be. Memoranda is fully voice acted which they did great in portraying the character. It did seem like voices that people will probably give to the character in question. However, I disliked Mizuki more than the others. At some points, I would not be able to understand as the voice actor sometimes muddles through a word or the pronunciation is strange. A notable one is the word memoranda that is pronounced differently the two times it’s said. And while this is with the script, I wished it was more subtle, as it repeats the same thing twice sometimes (I do hope people get that Mizuki has memory problems if she has to have her friend’s faces on her wall without being told twice back-to-back).

The soundtrack is wonderful, bringing in small and ambient parts, but brings in the heavy stuff when needed. It also uses nature as part of the background to bring you more into the world. The nice drawn art style is the best thing in Memoranda. Everything is designed really nicely and colors bring your eyes to certain areas. The landscapes and inside buildings was really nice, you can tell how welcoming it is based on the design. I also liked how small spaces are just areas in a sea of black, bringing in that they know when something can be too crowded.

The people had an interesting design, while you may not know them they did have their own personality with their appearance. The anthropomorphic animals, called Humanimals, were amazingly designed and great to see. As a bonus, you are able to see what they would look like as human which was interesting. If the artist ever decides to do a full anthropomorphic animal route with the characters later on, I can trust they will do great. Memoranda performed pretty well, having almost no stuttering or pauses in normal circumstances. I only came across some audio stuttering in the voice acting here and there, and even then it wasn’t too bad as it only lasted for a word. I do recommend to turn off notification pop ups though, I had problems with it showing in screenshots.

After playing it for the first time, the only reason to play it again is for the achievements. There are two achievements that you can easily miss that go on throughout most of the game. Other than that, depending on whether you want to go through the puzzles again, there’s no reason to return. + Art Style
+ Design of the characters

While I did enjoy the visuals Memoranda provided, the puzzles brought the game down. If there are puzzles, all of them have to be in constant logic throughout no matter how surreal it may be. If the player has to try to combine items or search endlessly for something that they missed it will reflect on how they enjoyed the game. The puzzles are the reason why I’m postponing playing it a second time to be honest. There are also things in the story that feel unfinished. It feels like it’s meant to have a sequel to reveal everything. It’s truly a toss up deciding whether to recommend or not recommend, so I suggest weighing what you think is important for point and click games.