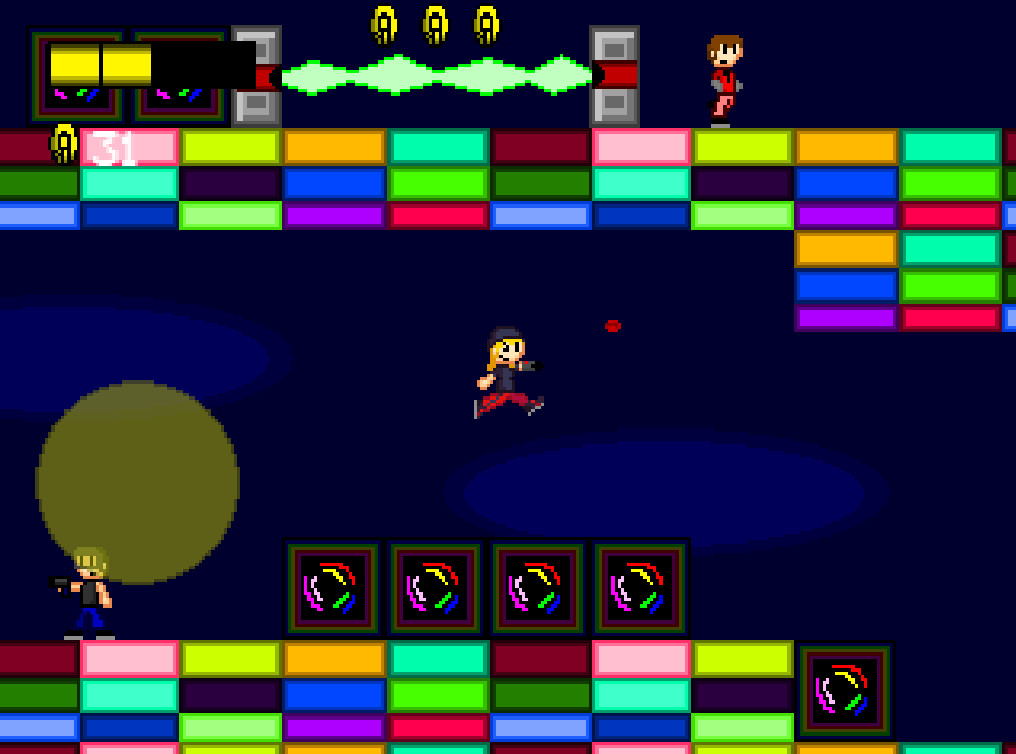 Tomboy named Alexandra with a hand cannon has to save the world from an evil madman who attacks the city, armed with thugs, robots and (intended) cliches.

Blast from the past

Game owns a lot to the old classics from the 8-bit nintendo era. Megaman, mario, contra (and all the likes) and promises to take players back to the time when gameplay was king. Sadly it’s much more simpler than it’s idols graphically, musically and on the difficulty-factor. There are some fun bits here and there on the levels, like the band jamming in the background at the nightclub, but for most part, the background is uninteresting and repetitive. The obstacles you face on the levels, whether they’re boxes that disappear after a certain time, electric currents or the rare enemy here and there aren’t really anything but a minor annoyance. Soundtrack itself is pretty casual, lightweight pop with simple melodies. It’s like this game does everything with 50% effort compared to it’s idols. Everything is down-graded and simplified. 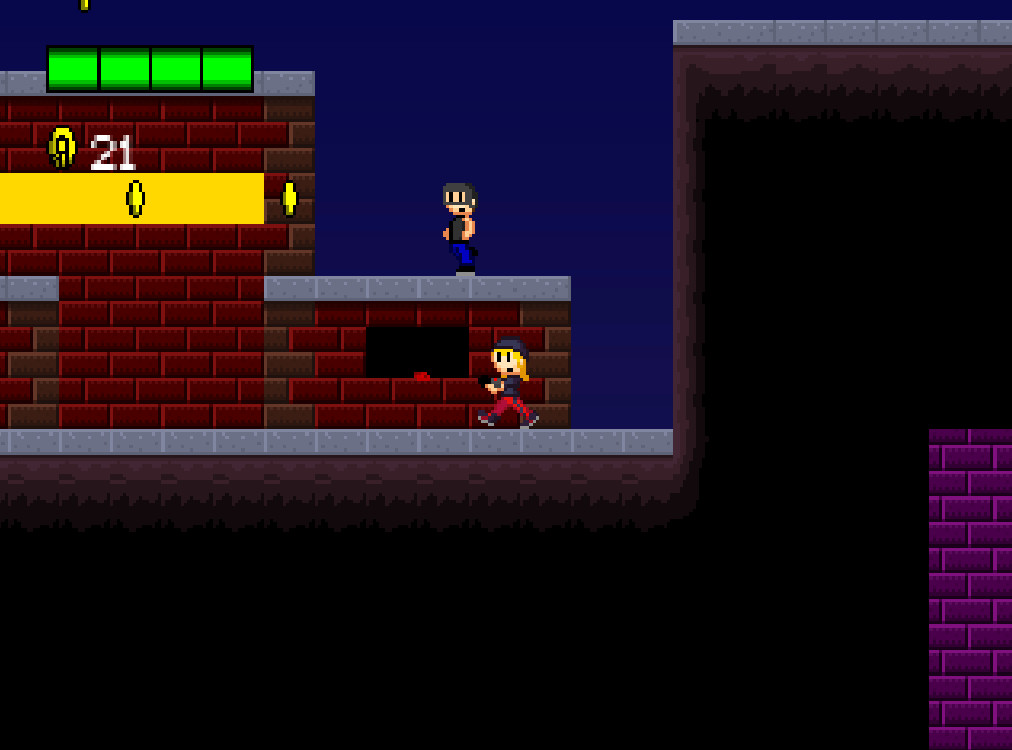 At one part of the game the levels seemed to be in multiple floors. On the rooftops, ground level and in the underground. I remember thinking back then then that now this game seems to open up. But then it was over and we were back on the linear path. There’s nothing wrong in linear path on a sidescroller platformer/shooter if there are enemies coming at you, obstacles or interesting jumping, but this game offers none of those. On the positive side: i accidentally stumbled on an surprising easter egg i’m not quite sure if it is some character from Metroid Prime, but certainly reminded of it. I don’t know are there more of those hidden in the levels, probably not many at least, since the levels are pretty linear. I didn’t fall down on every large hole to check for them, though. 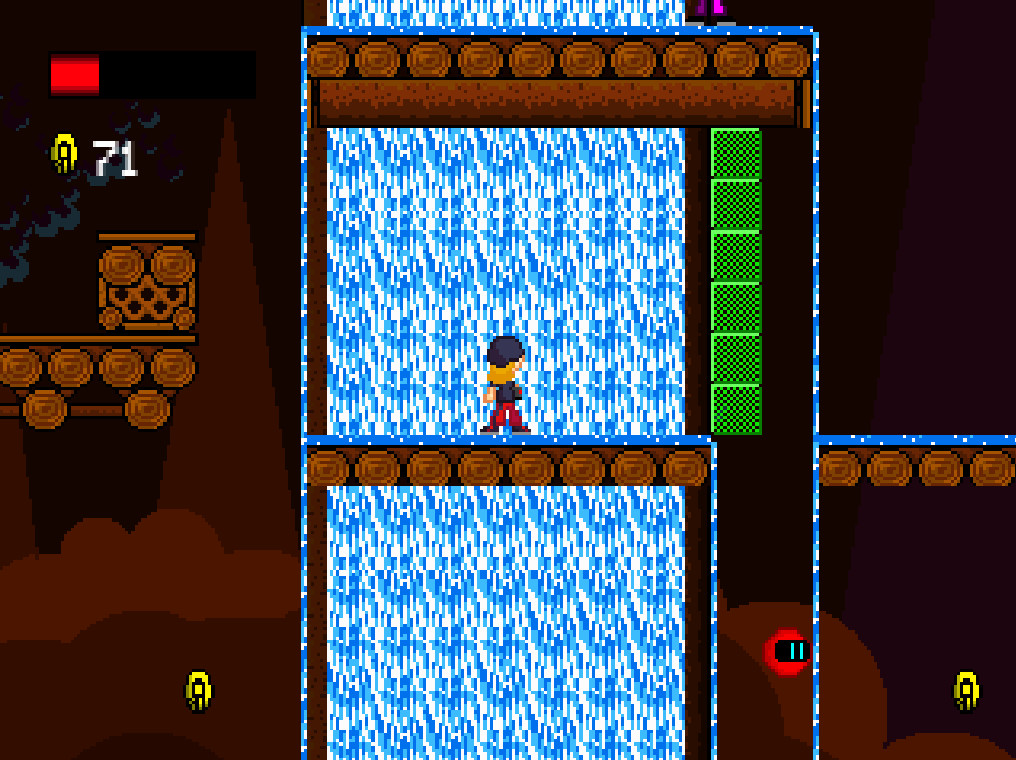 One surprising thing happened when i was trying to pause the game. I hit esc like i always do on pausing, it’s an old habit dating back two decades, and ended straight to desktop. No warning, no asking am i sure, just a quick flash of a black screen and then desktop.
Screenshotting this game was also an interesting process, Steam’s own screenshot-service did took the photo, but it showed black screen, and on the upper left corner a very small image of the game. I noticed this after completing most of the game. I have a huge collection of black screens on my steam screenshot folder.
For the rest i used print screen, went to paint, cropped my second monitor off from the picture and then i got the screenshot. This had to be done after every time i pressed the print screen, of course. Needless to say, it was a hassle. And that’s the reason there aren’t really pictures on this review from all around the game. I really didn’t want to start playing the game all over again.

Gameplay is basic sidescrolling. Left,right, up, rolling through small spaces and shooting. Jumping from one wall to another was a bit confusing, controls on that didn’t feel very tight, and i found the best way to get up long distances was to jump on and off on the same wall. Jumping from wall to wall took some practice, and even after that it didn’t feel like as handy as going up on one wall. I think this wasn’t the intention of the developer. Occasionally i even got stuck on a wall, and my only option to get unstuck was to roll. While it did look a bit funny when i’m rolling and falling, i suspect that wasn’t meant to be like that either. On it’s own the rolling is a nice and fun little touch, certainly something different than just sliding under tight passages, what seems to be the usual way of handling those kind of situations. Enemies you encounter range from humans to robots, melee to ranged. Slowly moving either left or right, or up and down and with easy to memorize attack patterns. Cannon fodder to your hand cannon, and you start wishing they wouldn’t exist at all so you could just be on your way. 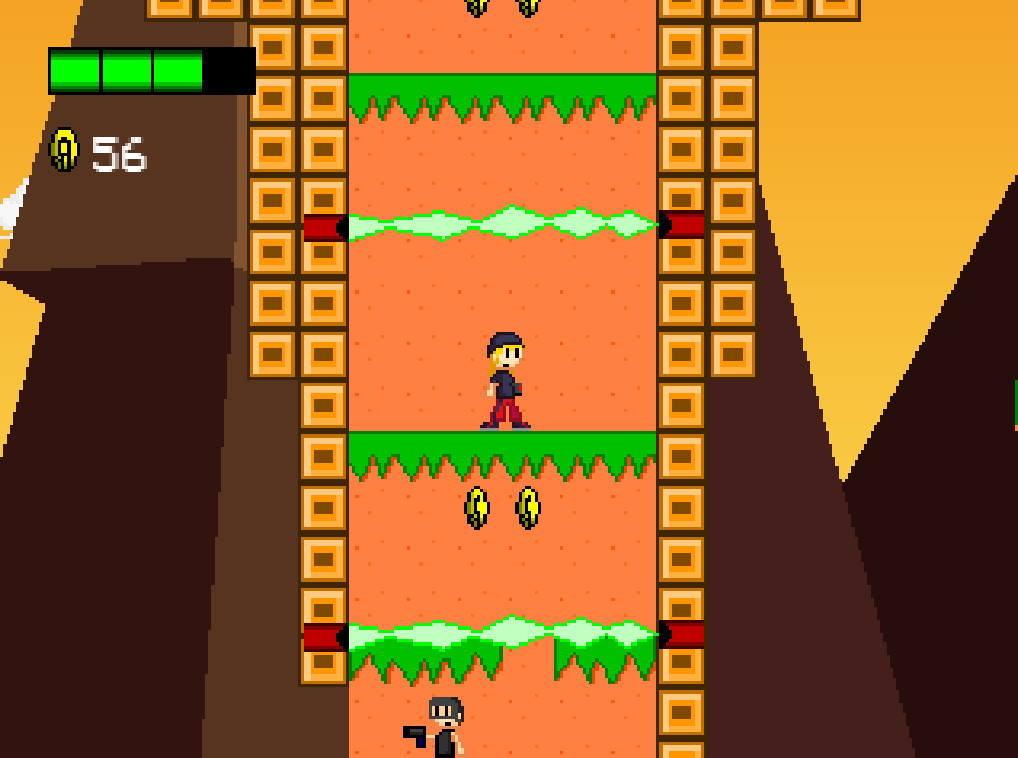 Developer seems to have a distinct style of humor, evidenced by the aforementioned rolling mechanic, and the clichéd plot that involves a mad professor announcing his plans just the way you would think he does. It’s clearly shown that he isn’t taking his game too seriously plot-wise, and it’s intended to be lightweight. That approach works much better than trying to make a proper and serious plot into a game like this. He also seemed to be pretty active on the Steam forums, answering questions and commenting on the reviews, though there weren’t many of them at the time of writing but still, it’s always a good sign for a developer to actually care what the players of his game are saying/asking. 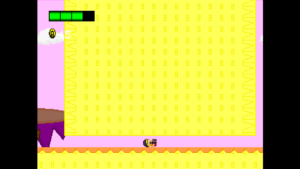 Should you buy it?
No. It’s only 99.cents (euro) at the time of writing. There are lots of better games for even cheaper price. Developer has new games coming on, hopefully he has learned from this project, since this had potential. 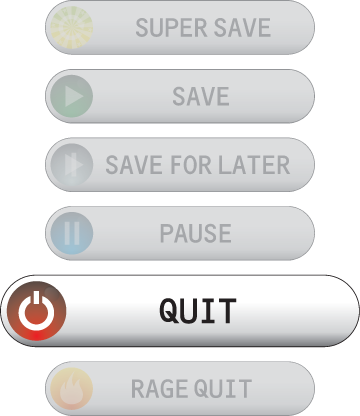