REVIEW: End Of The Mine

The cleverly-titled End of the Mine is a mostly enjoyable if somewhat unexceptional 2D platformer/shooter, in which the player mines for interplanetary goodies while blasting endless hordes of beasties. Find weapons, upgrade weapons, craft ammo, kill monsters, and…that’s about it, really. 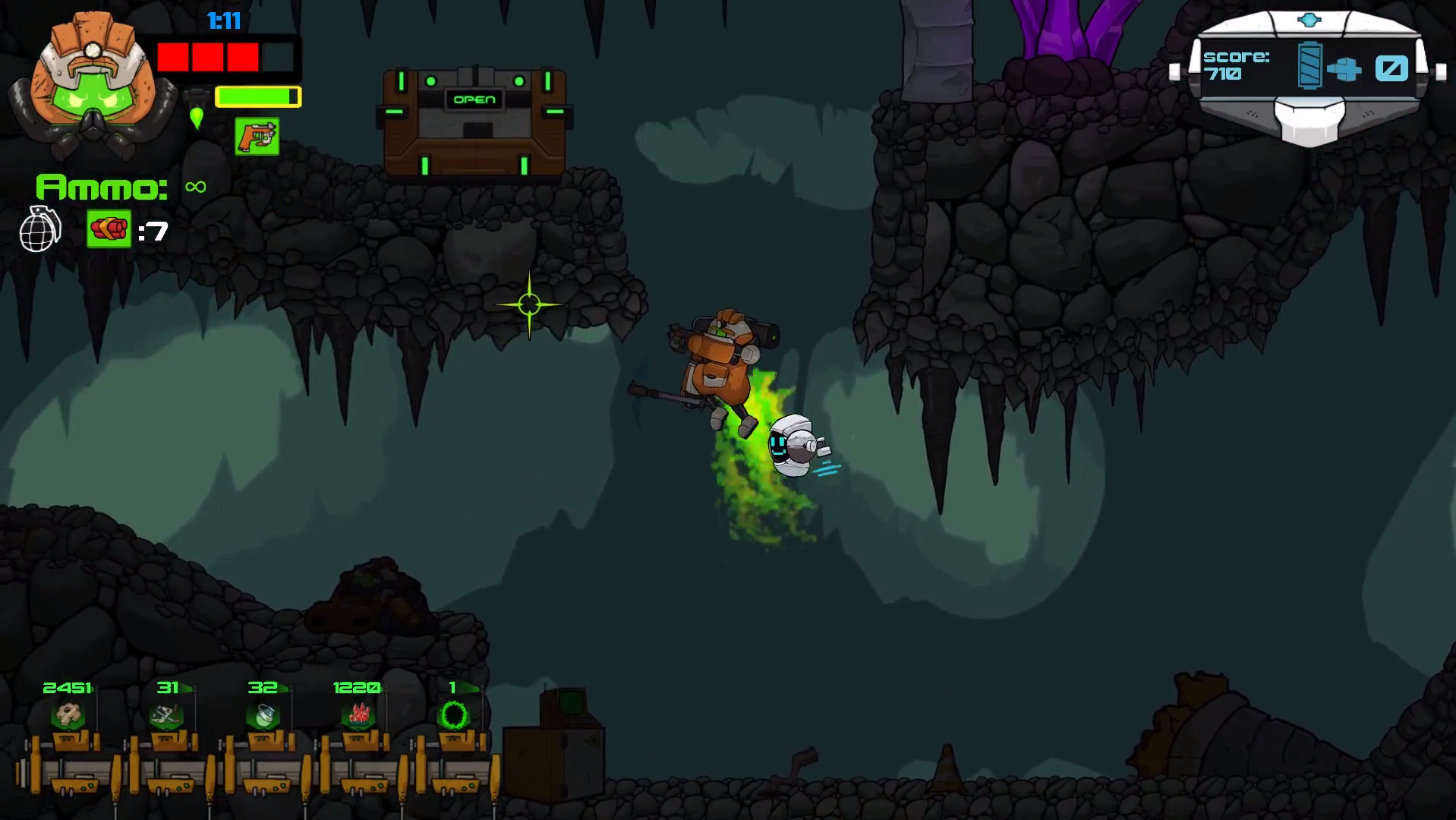 There’s no denying that the game has a somewhat unique and charming art style, but I must confess to being a little confused as to why such a simple, unashamedly retro-styled game would pose such a huge technical challenge to my laptop. There are only three resolution choices available to the player – 1980 x 1080, 1280 x 720, and 720 x 480 (!) – and even after reluctantly settling on the middle of these three options I found my game to be slightly laggy at times, especially during some of the busier boss fights and any scenes which found enemies aplenty buzzing about on-screen.

Now, to put all this into context, I’m also presently playing through the infamously demanding Rise of the Tomb Raider, which is proving decidedly less laggy at similar if not slightly higher settings. Call me crazy, but normally when I play a 2D platformer I expect far better performance than I do from a recent 3D, triple-A, semi-open-world title.

Don’t get me wrong, I know I’m not playing with the best specs here – it’s a pretty powerful laptop, though not quite a fully-fledged “gaming” one – but come on, people. Playdead’s recently-released, highly ambitious masterpiece, Inside, looked considerably spiffier than this and had no lag whatsoever. So while I’m no expert on the subject of optimisation, I’m guessing this game could use a bit of a polish in that area. There have also been quite a few reports of bugs and whatnot from others, but I’m pleased to report I’ve had no noteworthy problems herein. 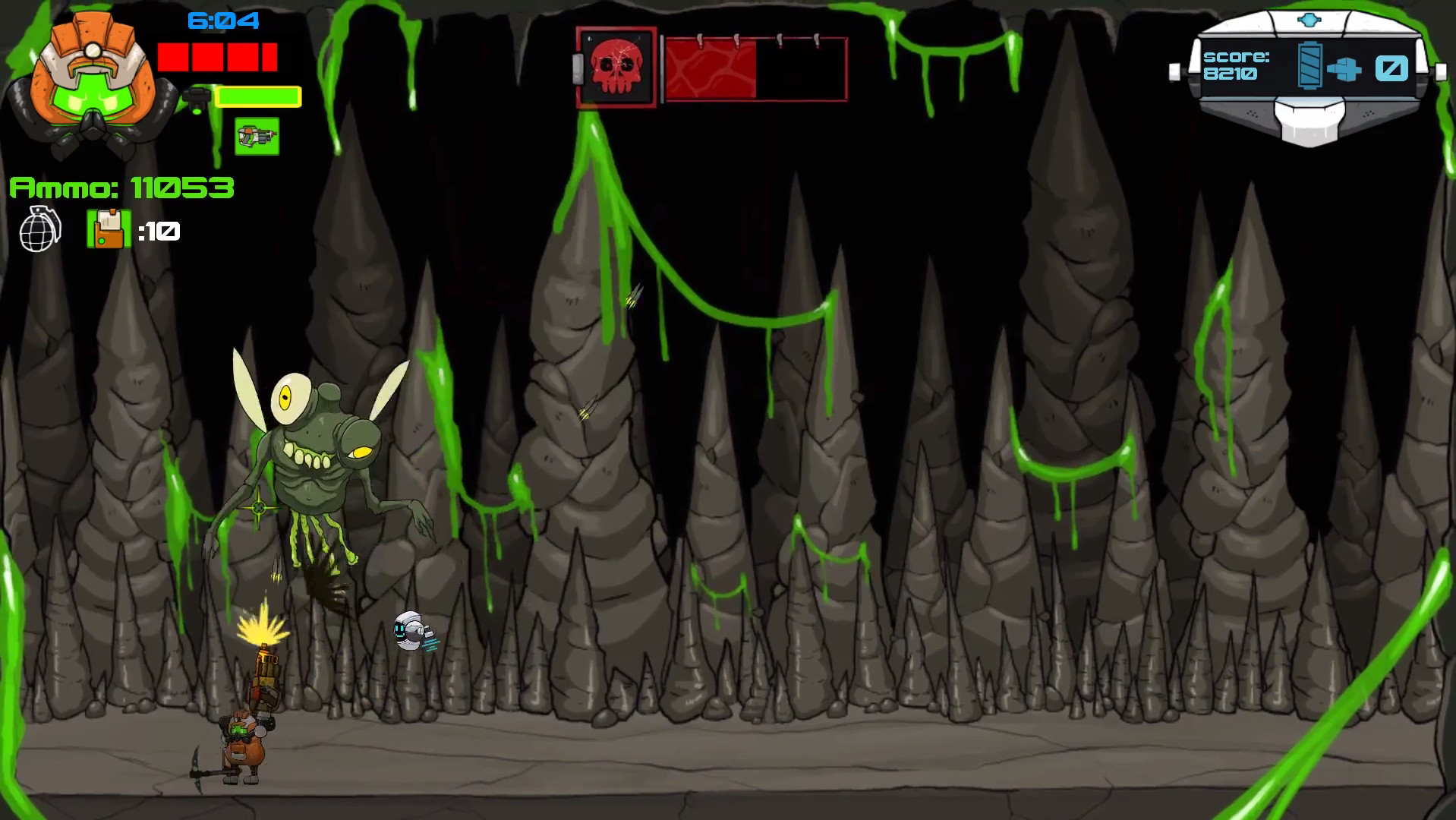 As hinted at in my intro, the gameplay is quite repetitive to say the least. This obviously isn’t a problem if you don’t tire easily of screens swarming with enemies and laser-fire, but for those of us who enjoy a more…let us say “nuanced” or “dynamic” experience, it gets fairly old fairly quickly.
I certainly found myself playing this one through in bite-sized chunks, but for those of you more accustomed to relentlessly action-packed games more taxing on the eyes than on the brain, you’ll probably be in quasi-“bullet-hell” heaven. It’s certainly a very “busy” game, especially once it gets going. I guess my A.D.D. mustn’t be developed enough to appreciate the aesthetic this game is going for (there’s every chance my O.C.D. just gets in the way).

Perhaps a good indication of the level of repetition on offer here is the fact that, in spite of the game boasting a mighty sixteen boss fights, all of these boss fights end up feeling fairly similar by the end of the day. I am quite grateful, though, for how easy most of these battles ended up being…at least until your little robotic miner finds himself trapped inside the belly of a whale (!) a little over halfway through the game, at which point the difficulty spikes through the roof and you find out just how ruthless this game can truly be. 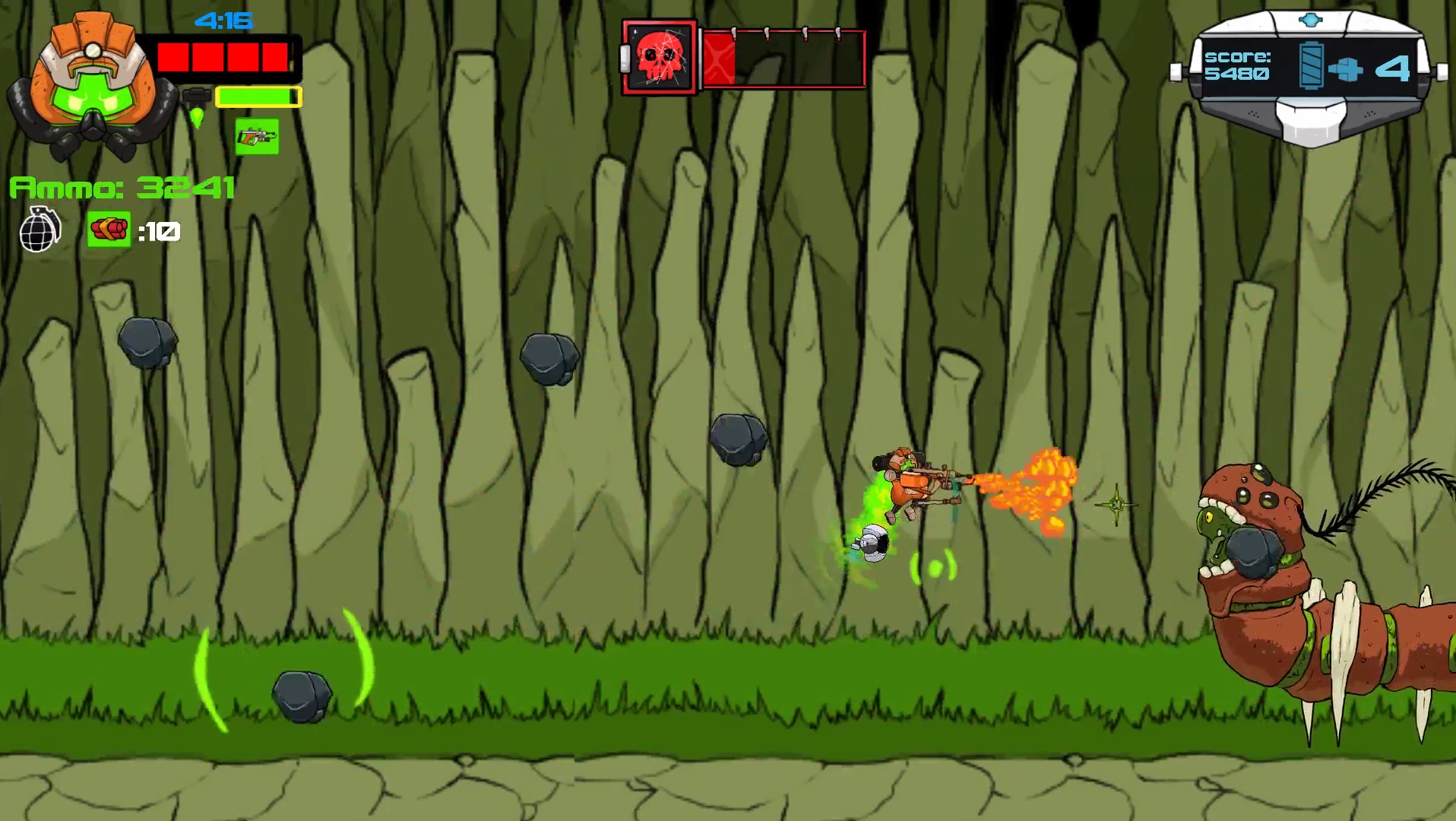 If there was one rule I would impose on all the game-makers of the world, it’s this one: you don’t ever, ever force a player to replay a boss fight they’ve already conquered. This is plainly and simply bad form.

The single most questionable piece of game design in End of the Mine is the decision to sometimes offer only a checkpoint, and not a save-point, at the end of some boss battles. This wouldn’t even be so bad if, after each failed boss fight, you were thrown back to the last checkpoint with the same inventory you started with. You aren’t.

Remember that shit-tonne of medkits and bombs you entered the second of this level’s boss fights with? Gone. So basically, you might have to go all the way back to the beginning of the level and do it all again (unless you’re good enough to beat the second boss with your weakest ammo and fuck-all healing items). All of which means – yup – you gotta re-fight that earlier boss you already conquered.

Welcome to Repetition City, Population: You. Suffice it to say, some will find this approach to game design forgivable and others may not. 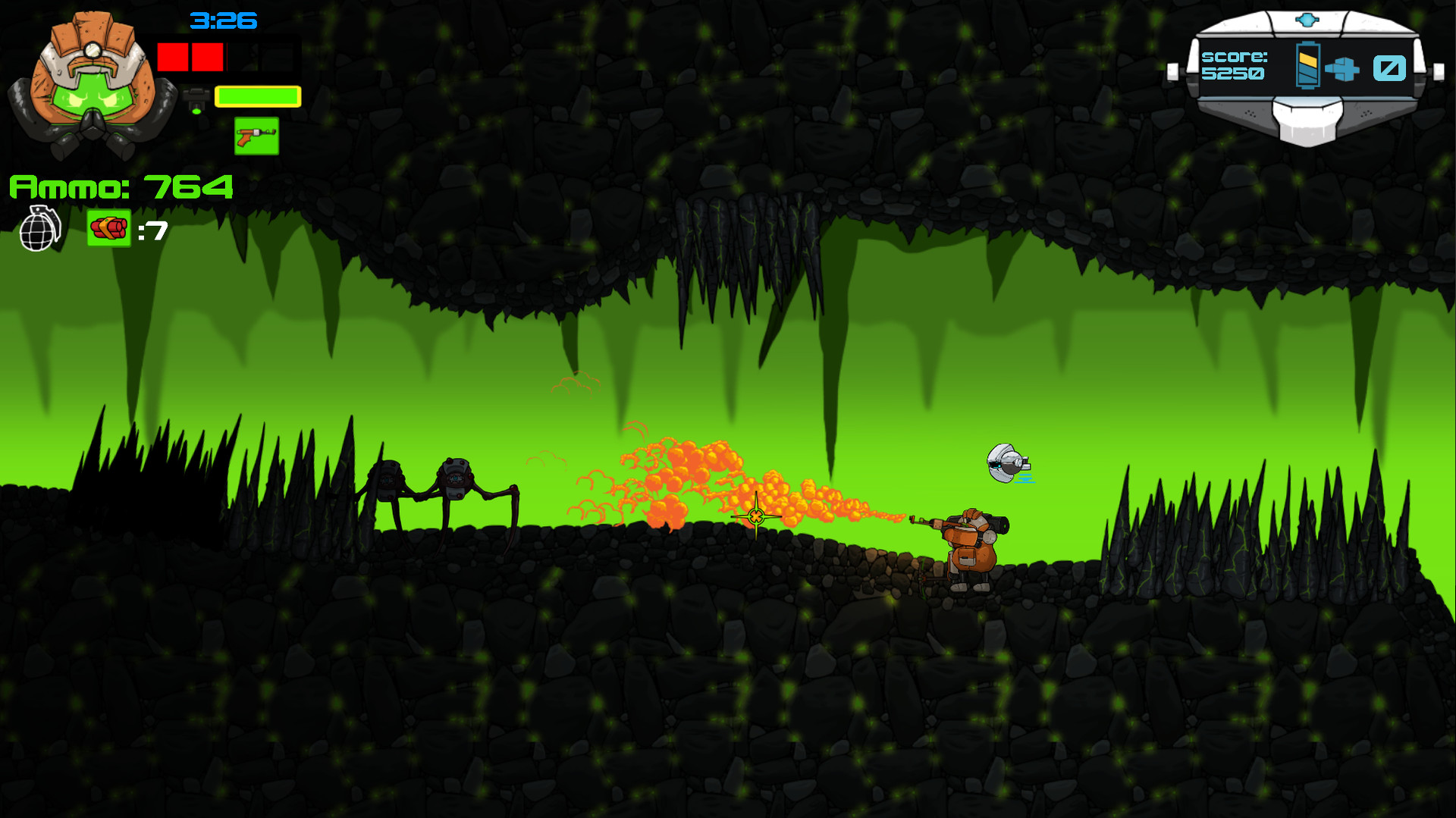 There’s also some intermittent mini-games in which our intrepid protagonist gets a brief break from his real-world death-defying shenanigans to play a retro game on old-school arcade cabinets he finds throughout the maps (hey, miners need lunch breaks too).

Unfortunately, these mini-games are just short, strictly-timed bullet-hell spray-fests which serve as anything but a break from the near-endless shooting which comprises much of the main game anyway. A bit of a missed opportunity in my opinion: perhaps a Moon Patrol homage would have been more inspired, while remaining thematically relevant to the game at hand? Oh well…maybe save that one for End of the Mine 2… 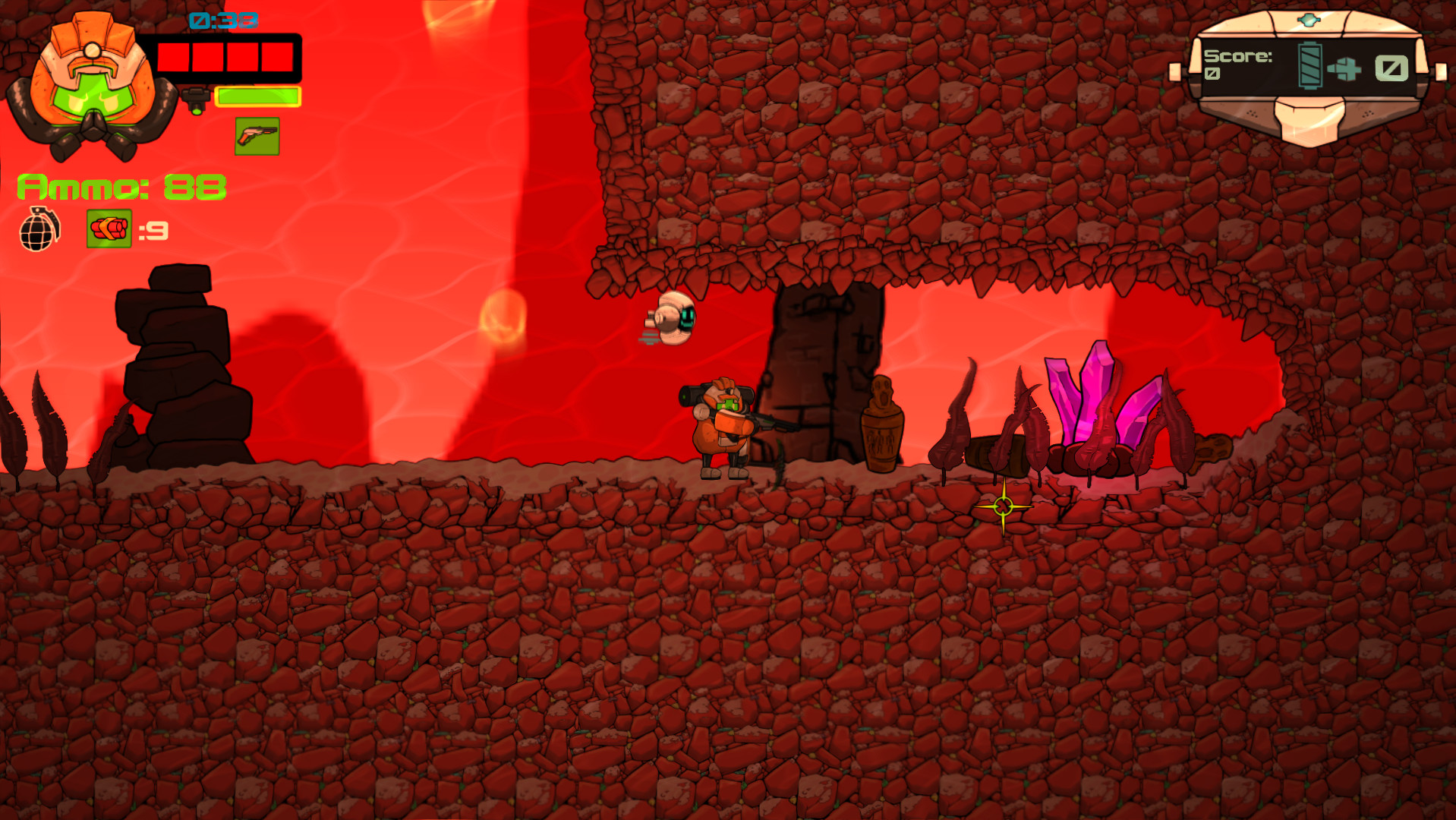 Nothing about this game is terribly special: not the graphics, not the gameplay, not the setting, not the sound (although the music does have its moments). Sure, there’s nothing particularly “bad” about it, but also nothing that great. It has its charms, it has its shortcomings. It’s fairly similar to a lot of games already out there; some of them better, some of them worse. Or, to put all this in slightly fewer words: it is what it is.

And while I do appreciate that the devs haven’t committed the same sin as many a fledgling indie game company before them – i.e. getting way too ambitious way too quickly – here’s hoping they up the stakes a little with their next project, whatever that game might be. A respectable first effort from Skirmish Entertainment, though not a whole helluva lot more than that unfortunately.

Tagged as2D, End of the Mine, platformer, shooter, side-scrolling
Share:TwitterFacebookRedditPinterestWhatsAppEmail