Currently, Rocket Riot only offers an explosive (ohoho) single player experience, but its Xbox Live debut back in 2009 had multiplayer which some people might miss or want. The developers are looking into some alternatives since they don’t have the Live integration which means this review will only focus on what’s there. 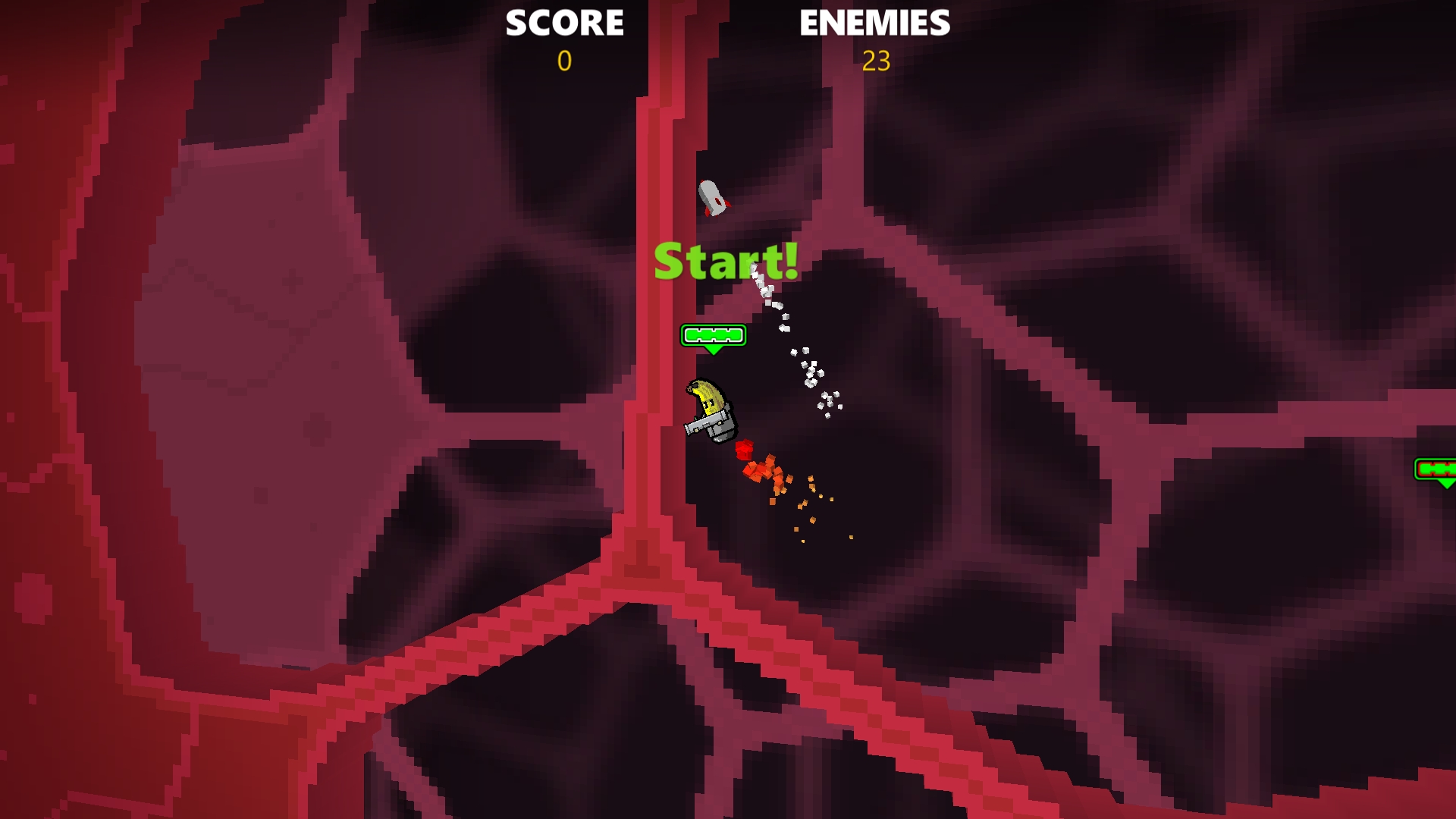 You can expect to have access to all nine campaigns with their own little humorous story bits that come in at an impressive 200+ levels. The levels have distinct themes too as I fought my way through groups of them that took place in a jungle, a graveyard, a computer, a circus, and even a human body. From what I played, each level has a unique layout and uses a 3D block pixel art design that serves a gameplay purpose. I’d like to note that some themes have better or more interesting backgrounds than others depending on which campaign you’re playing. Dream World has some 2.5D type backgrounds that stand out from older parts of the game such as the main story with Blockbeard. 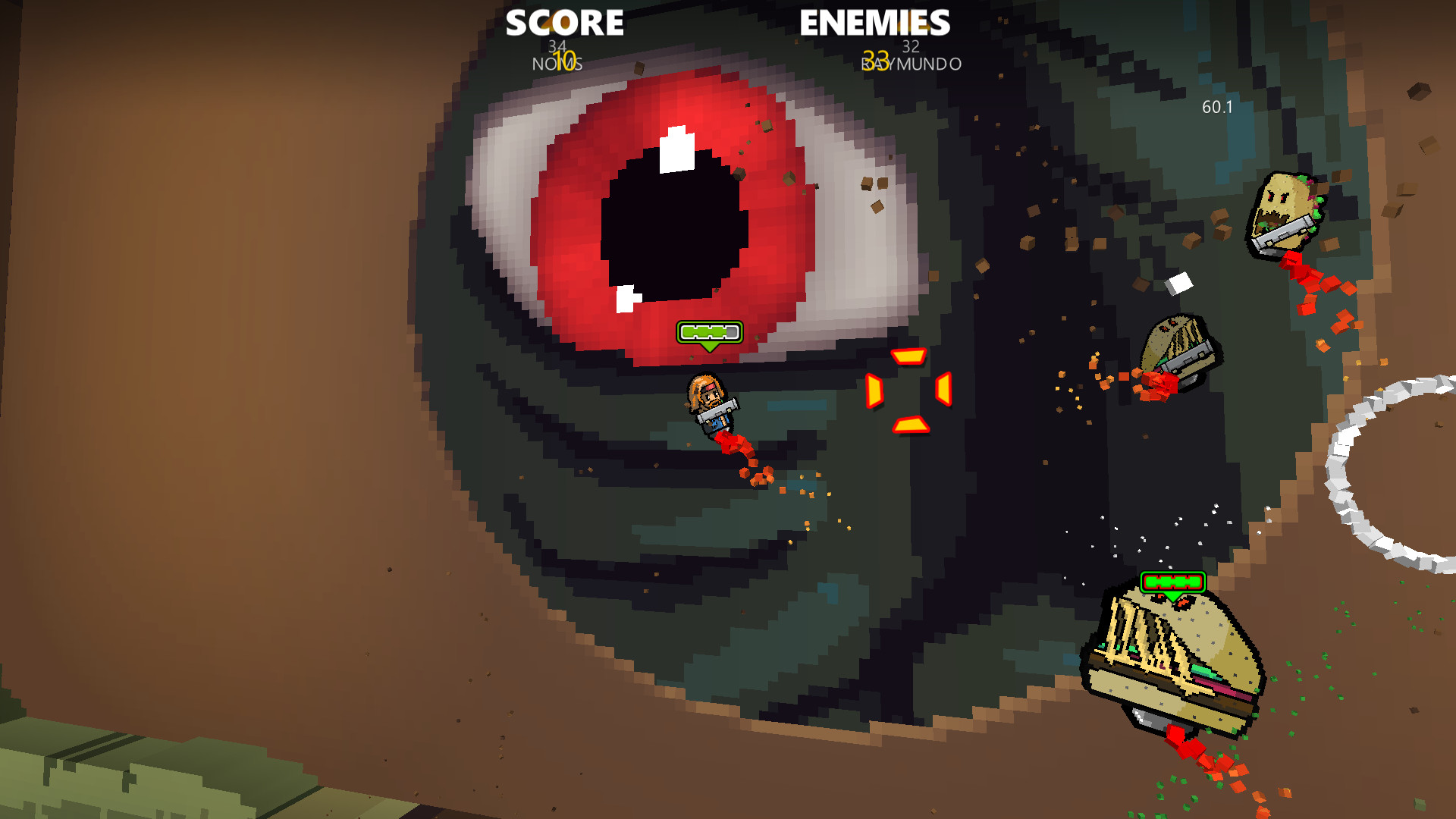 The gameplay has an arcade type of quality to it as you can collect power-ups when you’re not too busy firing rockets at the enemies. You control the rocket’s distance by how long you hold down the fire button. Power-ups drop when destroying the environment and the whole level except for the borders are fully destructible. Be aware that most parts of the level will regenerate which can work with or against you depending on the situation. The buffs themselves come in four different flavors: offensive, defensive, neutral/funny, and debuff. Visiting the help section of the game can provide you with all the details for what all the symbols mean. Now, the core of the game doesn’t exactly evolve over time which makes longer play sessions feel repetitive and tedious. What you experience at the beginning will be the same at the end in the campaigns. What does change are the mission objectives.

Most of the time, your objective is to deplete the enemy’s number down to zero, but there are other goals in place, including scoring goals. Yes, one mode has you chase down a ball at the other end of the level and bring it back safely to shoot into the field goal. Sometimes you’ll need to destroy certain blocks to complete the level, simply survive for a set amount of time, or even find a hiding enemy. There are other things in play, but I’ll just mention that boss fights are present and some of them can be difficult until you remember to destroy the environment to search for a power-up. Rapid fire is king. 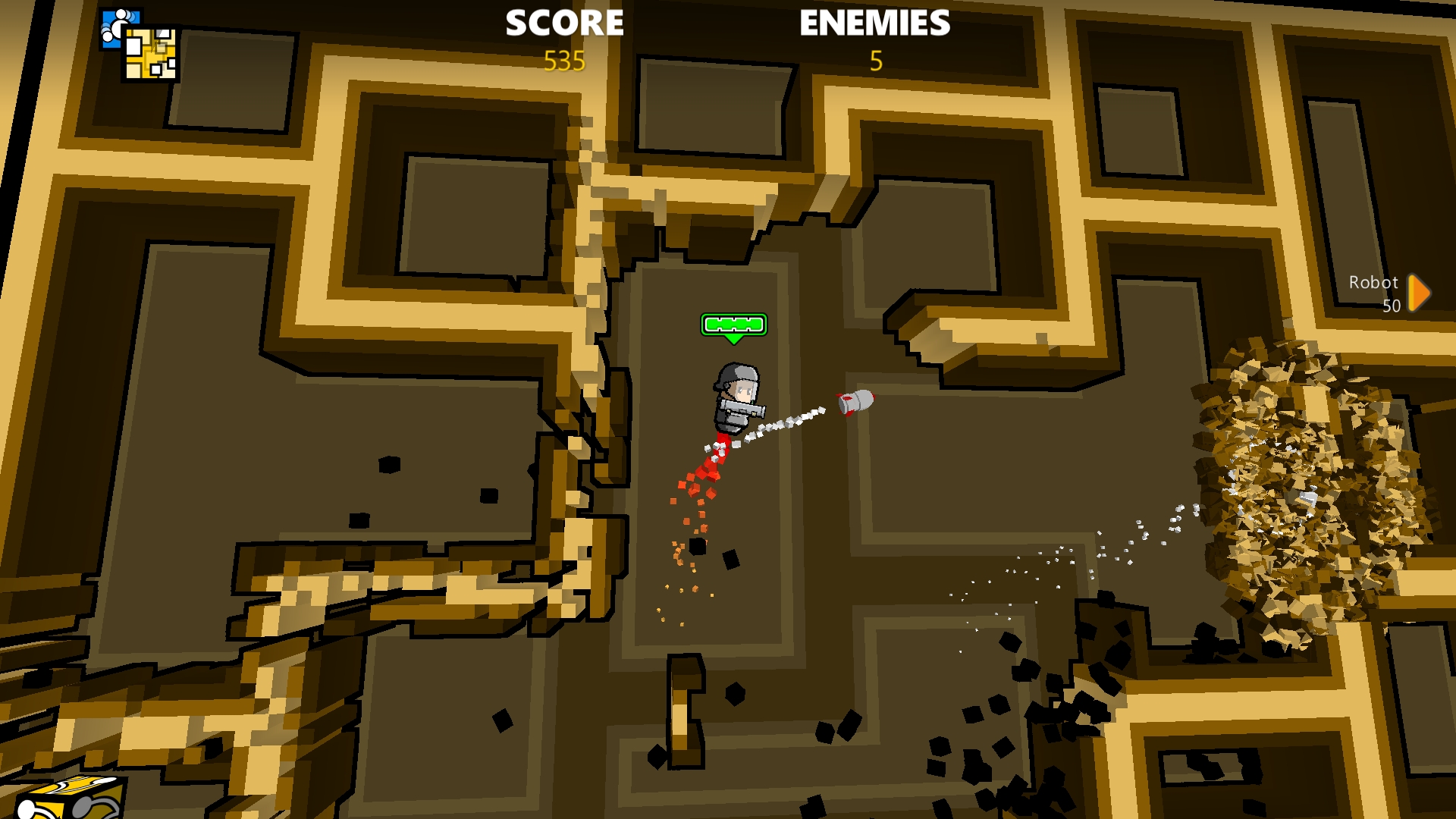 Destroying the level serves another purpose which includes creating escape routes or cover. Being hit by rockets is a bad idea and so is running into a dead end. Thankfully, you can blast your way through to safety. Anything hit by rockets explodes into blocks which I found visually appealing. In fact, enemies also turn into blocky bits upon death that carry the momentum of the shot and bounce around the level. The blocky destruction is probably the number one reason for why I enjoy the game. The second reason is that enemies are able to hurt each other which I appreciate in any game. You can manage large groups of them by circling around to increase the chances of friendly fire which can also help you take down the larger mini-boss type enemies. 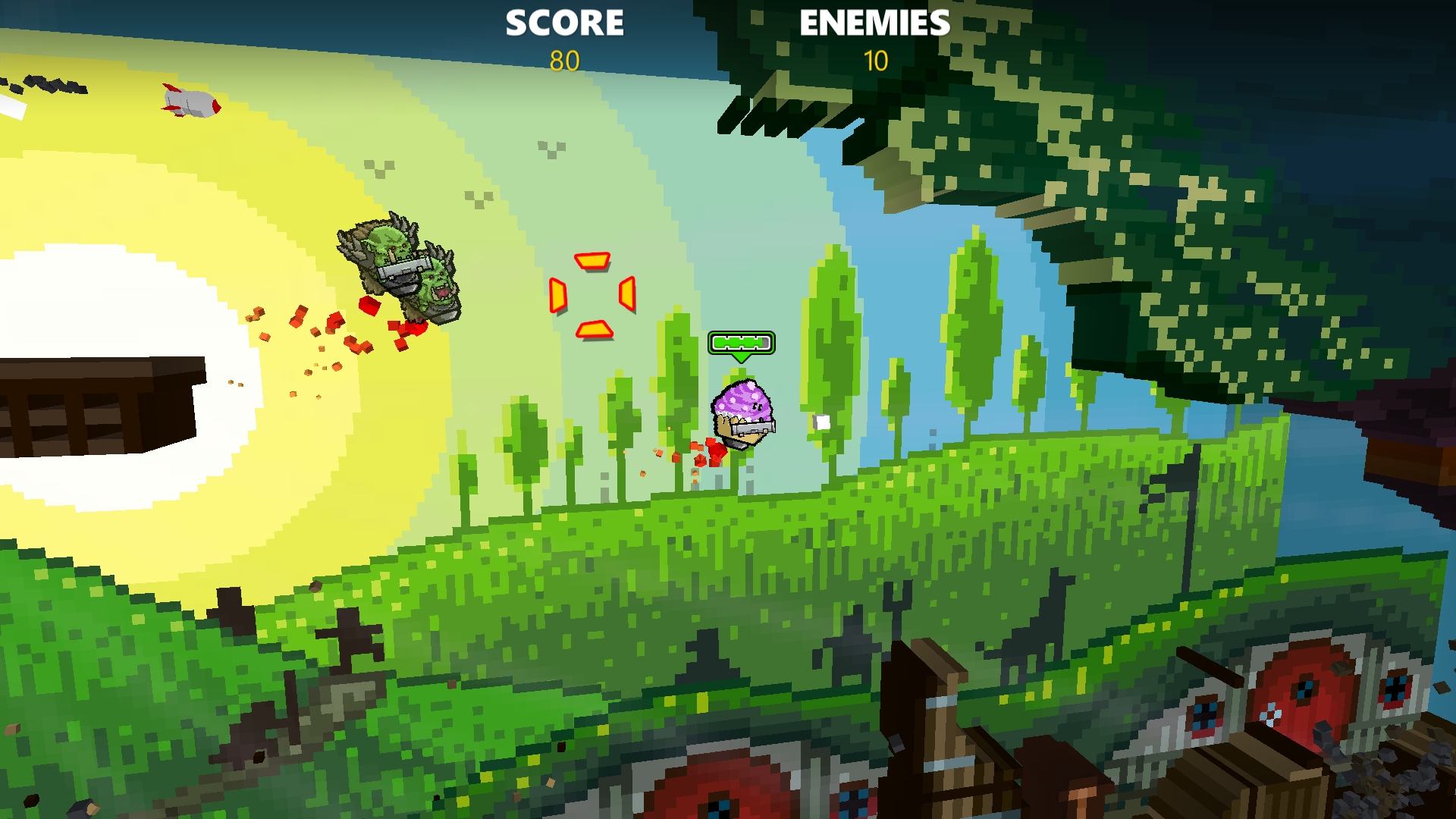 So there’s no kind of multiplayer present, but there are leaderboards. The game does have a scoring system in place that you can decide to learn. Picking up zero power-ups, picking up a debuff, no spamming rockets, or no camping in corners are all different ways to add extra points to your score after completing a stage. There are also score bonuses for how you destroy them be it through quick succession or from far away. You can study the whole list in the help section if you truly want to chase some scores, but there doesn’t seem to be much activity with the game. Of the three campaigns that I played to completion, I ended up in the top ten which suggests that people are not playing the game as much as I would like.

I’ll quickly mention that the game plays slightly better with a controller, has a weird theme song that plays in the menu called “Go Bananaman,” and has plenty of characters to choose from that function like skins. You unlock more of the latter via killing them in the game. 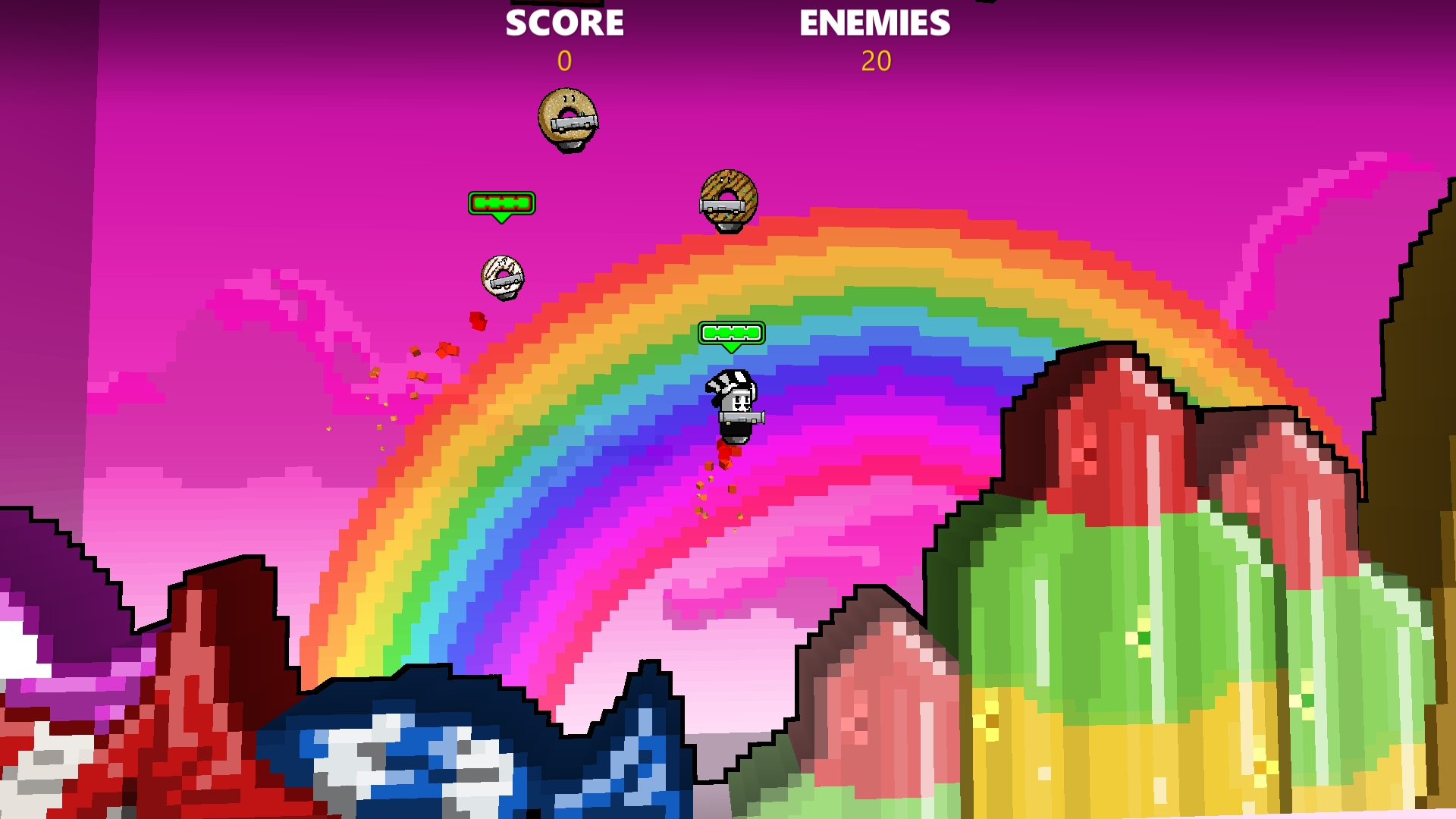 Overall, Rocket Riot is a fun game to play in short bursts, but if you don’t find the environmental destruction and blocky giblets as attractive and fun as I did, you might not enjoy yourself. There’s also no multiplayer hook and the leaderboards are barren. You should primarily be purchasing this title for the gameplay and not much else.