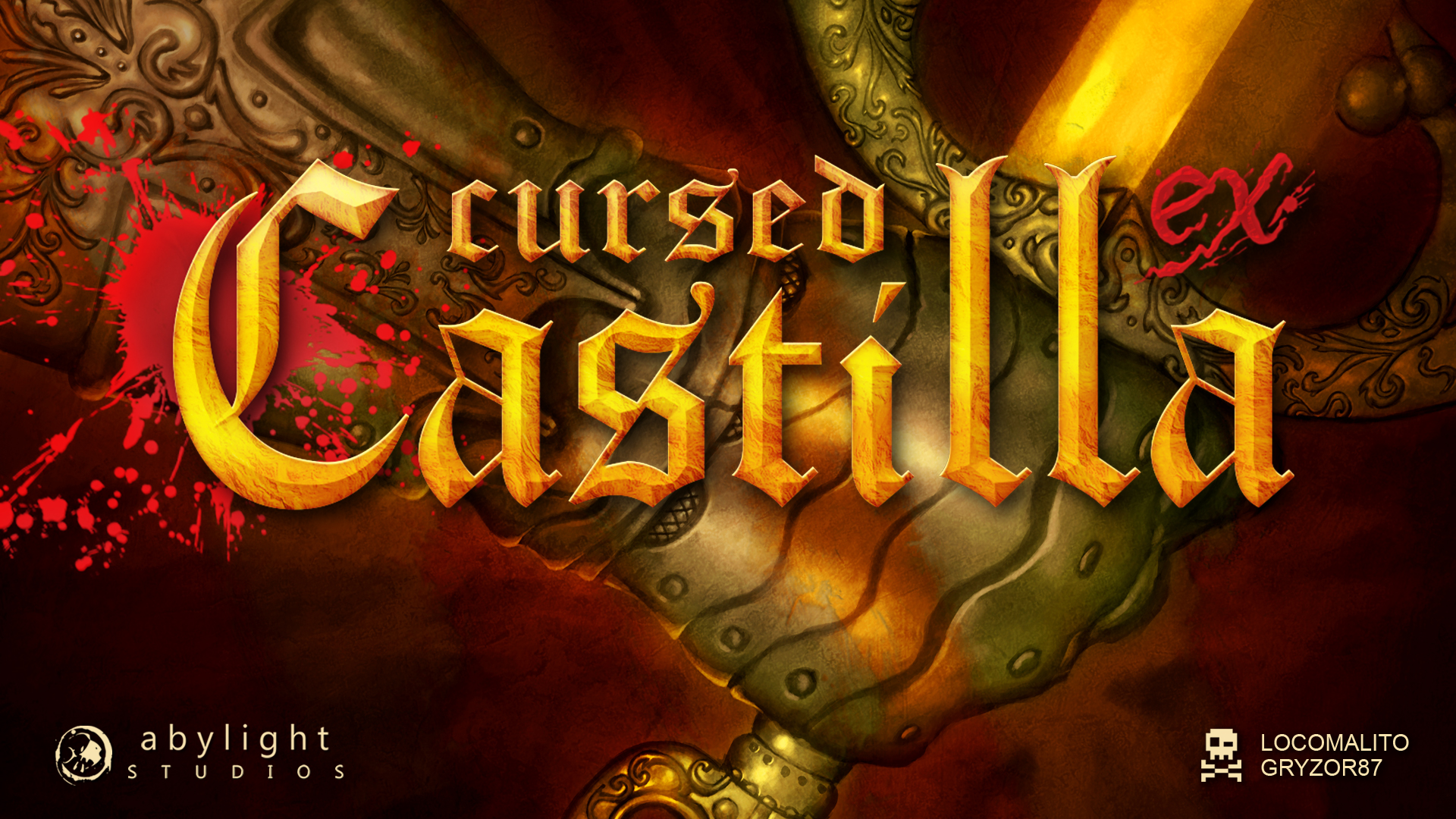 Cursed Castilla could be a spin-off from Ghosts n Goblins, an arcade title of 1985. You know, those ridiculously difficult games designed to eat your coins by making you die over and over until you mastered the game and could finish it blindfolded. And poor.

The lone developer Locomalito specializes in retro-gaming, and aims to create his own classics as if his favorite games had a new spin-off. With the help of Gryzor87 for the music, he developed Maldita Castilla, an acclaimed freeware that is now seeing a commercial release with a few additional levels and weapons. While freewares get an easy pass, let us see how the new release holds up to circumspect scrutiny. 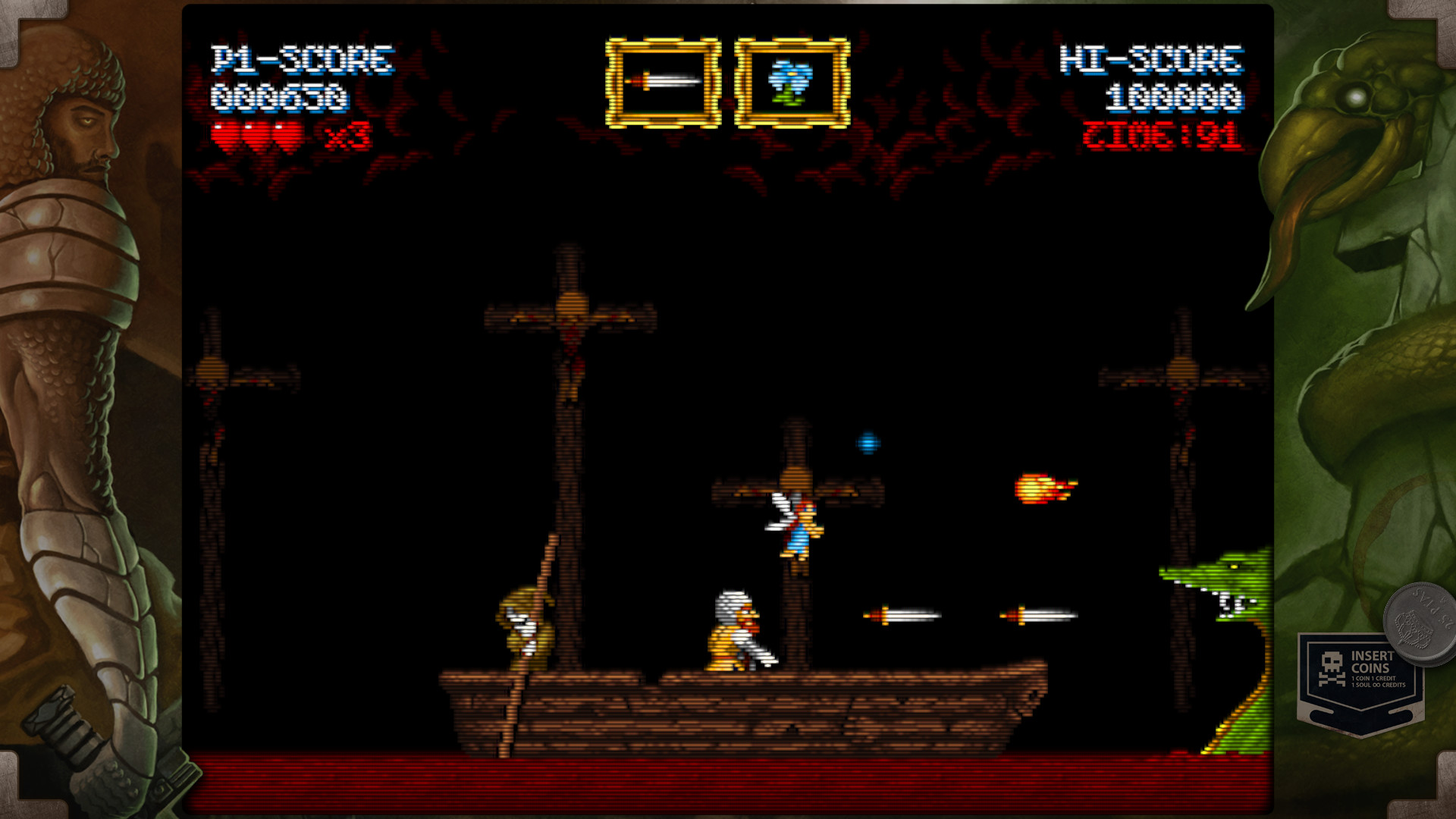 The gameplay of Cursed Castilla is very similar to Ghosts n Goblins albeit a bit updated. The base weapon consists of two thrown swords, and the swords need to hit something or exit the screen in order to have them ready to be thrown again. This means that the player has to be very deliberate when attacking. A few additional weapons can be found, such as daggers with more spread or an axe with a different flight pattern. A welcome addition is the possibility to wait for the icon to change until you see the weapon that pleases you instead of being stuck with one you do not like. Apart from that addition, old school jumps are sadly present. There is too little air control, so every jump has to be deliberate as well considering that the character falls like a rock and can hardly be stirred back to safety after a mistake. While this was acceptable in the 80s, since then platformers are much more fluid in the way the character should handle. Occasionally, a double jump bonus can be found, but it will be taken away from the player as soon as they die or find another bonus. 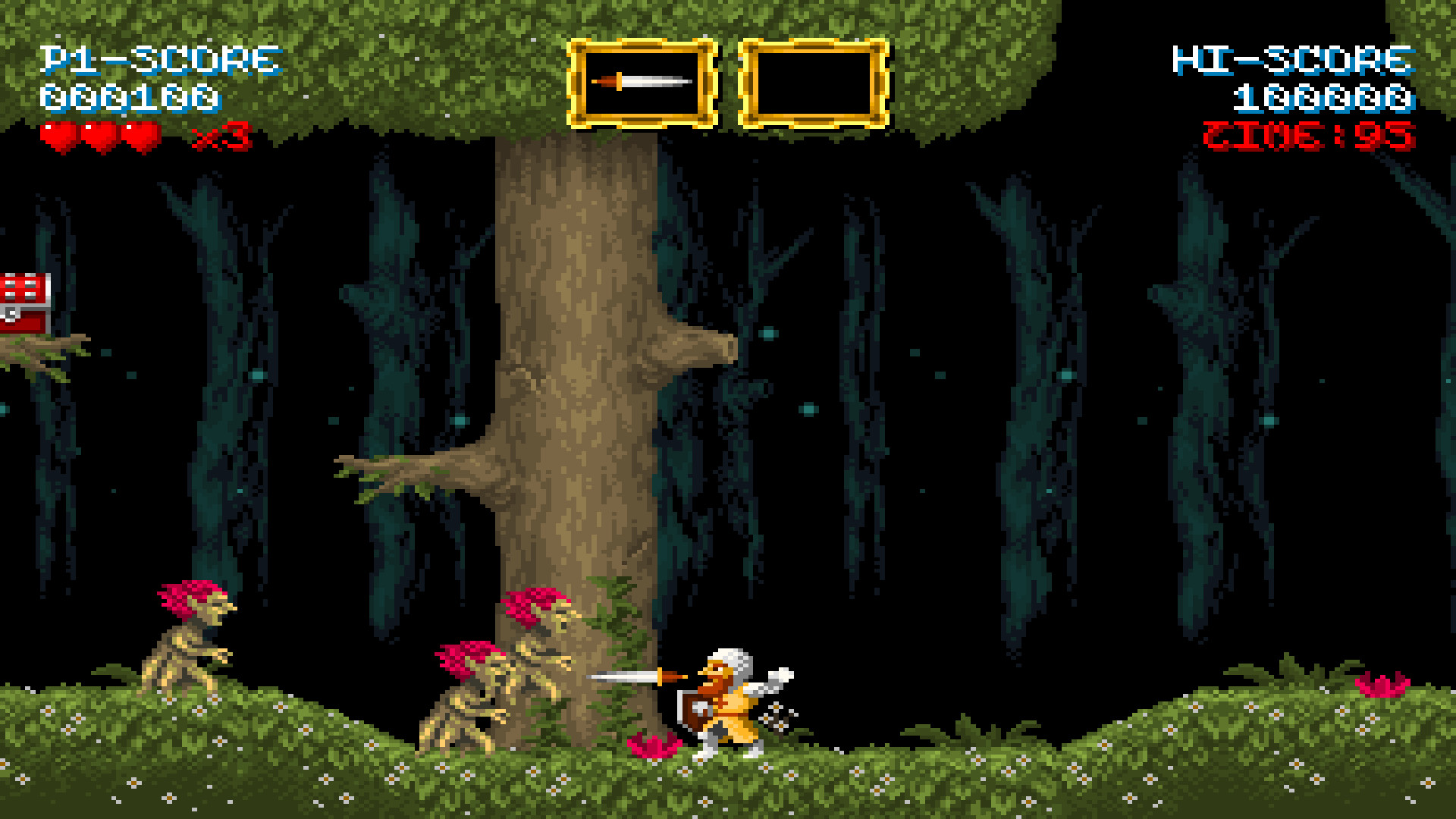 Added to my list of grievances are checkpoints and levels, but not because they are too far apart. Levels are divided into shorter sections, and dying means going back to the start of that section, not the start of a level. Except from a few super difficult levels, this is mostly fair. However, leaving the game for whatever reason (like having to eat maybe) causes the player to lose all progress after the start of the level. Well at least I got to replay a few times some infuriating sections until I was really good at them. To make things even worse, there are hidden gems in the adventure and if they are missed it is impossible to replay a specific level to get them. They are quite important, since they unlock the last levels. Everything has to be done perfectly in one adventure. There are infinite lives and continues, but dying four times prevents from reaching the true ending. While all of this was acceptable for a freeware, it is harder to swallow in a full release. Especially considering that the game is brutally hard (and this comes from someone that never got stuck in RIVE or BUTCHER), so basically only a select few players will ever reach the true ending. Most likely speedrunners that will spend many hours on the game. I was 10th on the leaderboard, so I could see that not many people managed to get this far let alone reach the true ending. Aiming for old-school can certainly be nice, but not everything old is a feature we still want to see nowadays.

Some levels are infuriating. Having to jump atop turtles while being attacked by bees and having to avoid spikes hanging in the air. Climbing a tower using an elevator while being drowned in murderous cogs. Swinging from chain to chain over deadly spikes while being chased after by poisonous bubbles. Jumping on moving platforms while spiders crawl about anywhere on the screen. And every time the player dies, they lose their weapon! I found that sometimes the difficulty was way too high, stretching the border towards unfair. And yet when I replayed those levels, I almost went through them in a breeze. Practice makes perfect. 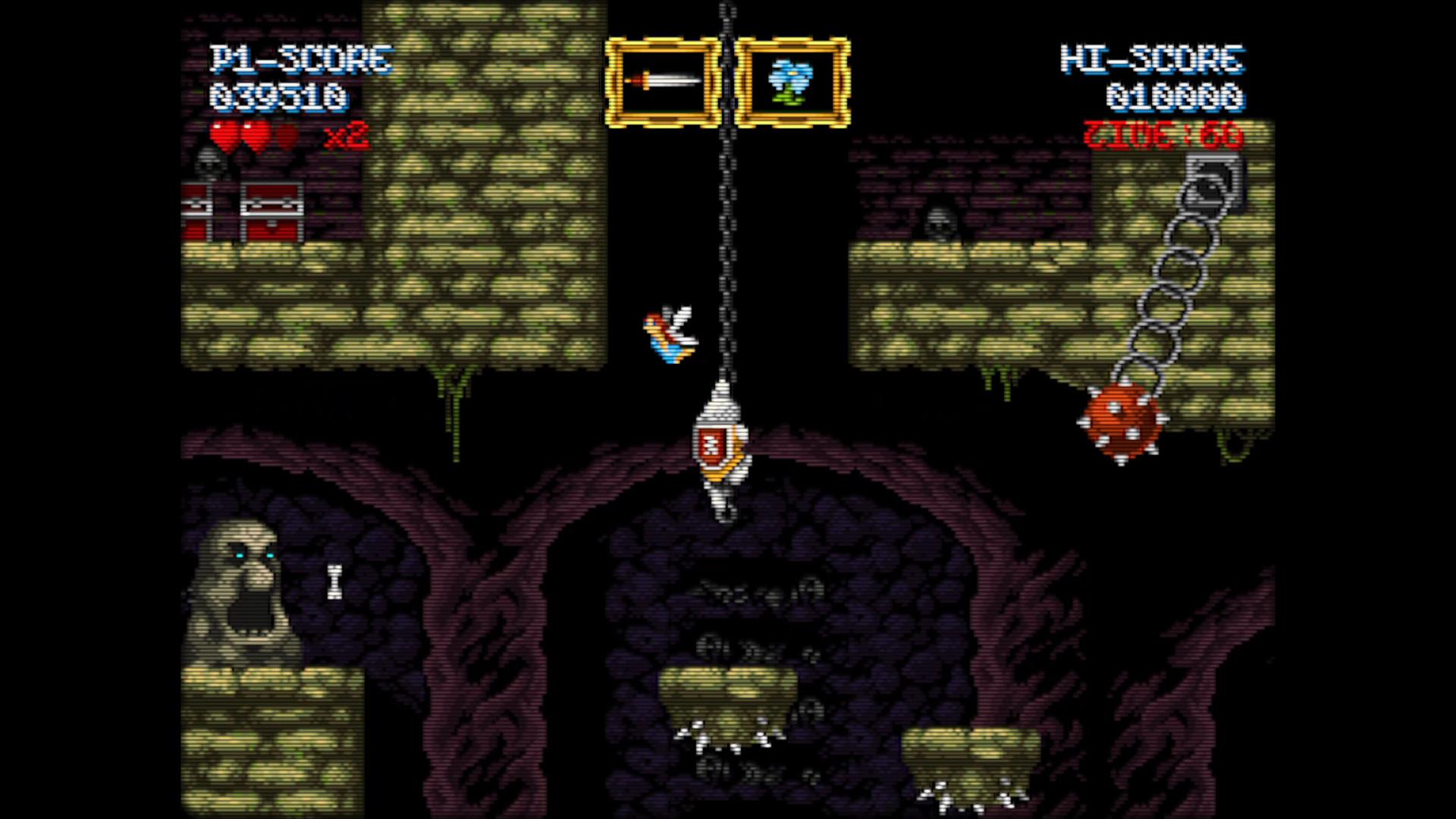 Despite the turtles, the deaths, the difficulty, the spiders, THE TURTLES YES I INSIST, I HATED THAT LEVEL… I still loved the game. It is very earnest in being a hardcore retro-platformer, so it is hard to blame the game for being exactly what it set itself to be. Taken as an old-school platformer that forgot the passing of time, it is brilliant. Released in the 80s or early 90s, it would have been a true classic, still beloved today. While it could have been lazy and just thrown an obstacle course at the player, here the monsters and bosses have a very inspired design and behavior, and there are so many of them, it is a joy just to see what the game comes up with next. Variety is a huge virtue of Cursed Castilla. The monsters seem like a mix between classic catacomb dwellers, Spanish and medieval folklore, and the manga Berserk with its demonic denizens. While there is little dialog, the overall feel of the story and the denizens of Castilla is evocatively dark.

The screen aspect ratio is 4:3, it can be stretched or the screen can be filled with game art or black bands. A lovely CRT effect can be turned ON or OFF. Keyboard keys can be rebound, however this game would not fit a WASD playstyle in which W is for jumping because W needs to be bound to “Up” to aim the weapons. So Spacebar it is, or a controller. I have tried several controllers and only the X-input ones were recognized (Xbox type). 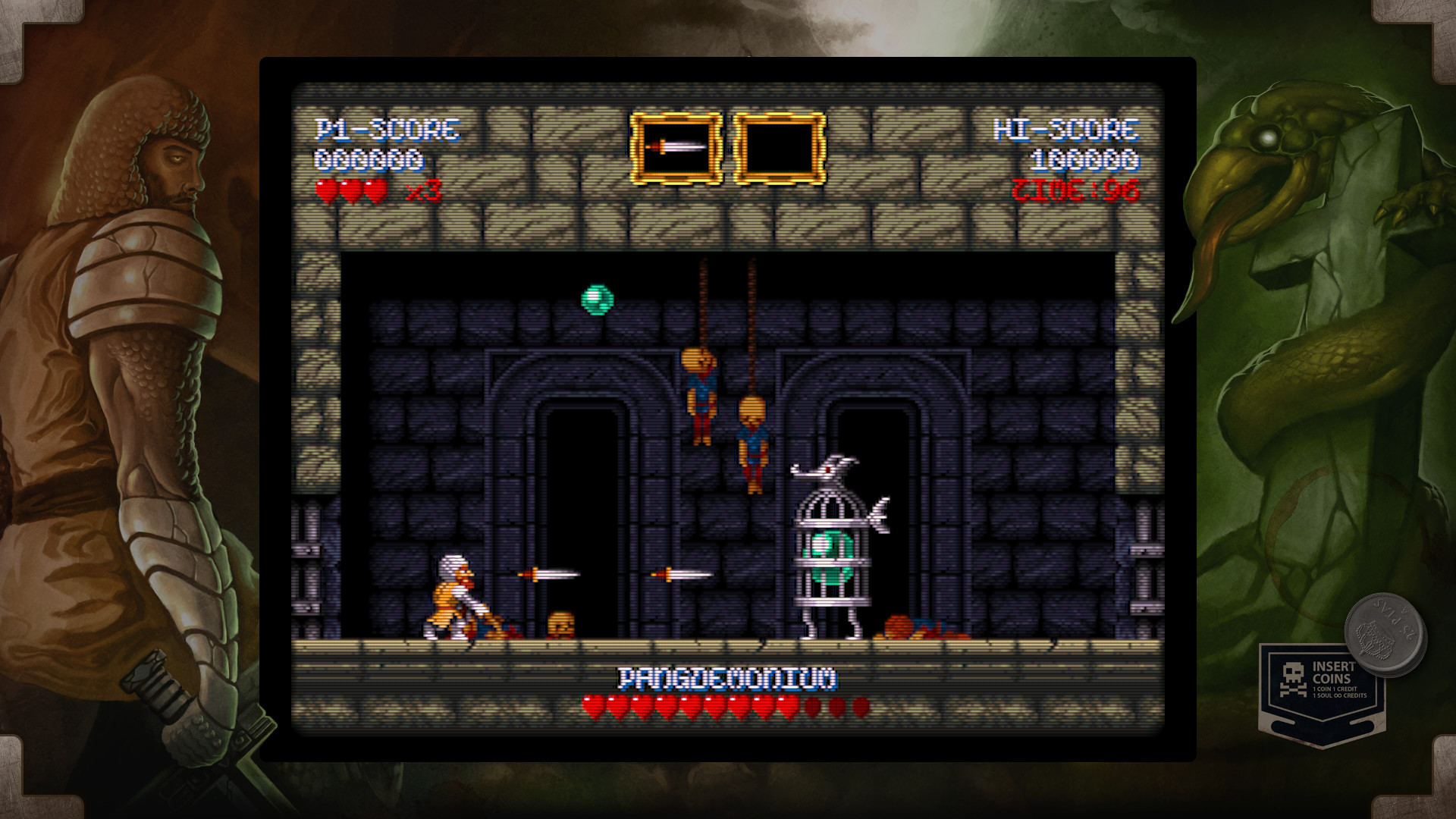 Cursed Castilla is clearly a labor of love, from the game mechanics to the graphics and music. I would heartily recommend it to any speedrunner aficionado, any tough platformer enthusiast or someone hugely passionate about that era of gaming, but it is a harder sell for more mainstream audiences. Curious people that do not intend to go far could just play the freeware, although I am glad that there exists a paid version of the game to reward Locomalito for his excellent work. As to myself, I had a good time with the game; charmed by its graphics and the depth of its adventure, pumped by its precise action, left cold by some very difficult sections and repelled by two last levels that seem almost impossible to reach within a decent time frame. Hard mode separate from a new normal mode would have been nice! Retro can be good, but in moderation. Still, glorious game. Well done.

Here is my video review showcasing the beginning of the game:

Oh and this video here shows the level in which those cursed turtles are dwelling.