Angus hates Aliens is a little indie game that I hadn’t heard of until I was tasked with reviewing a recent game as opposed to my older releases I generally review. I was given a copy, quickly downloaded it and fired it up. So what did I think well, here’s my little review for you dear readers, shall we get started? 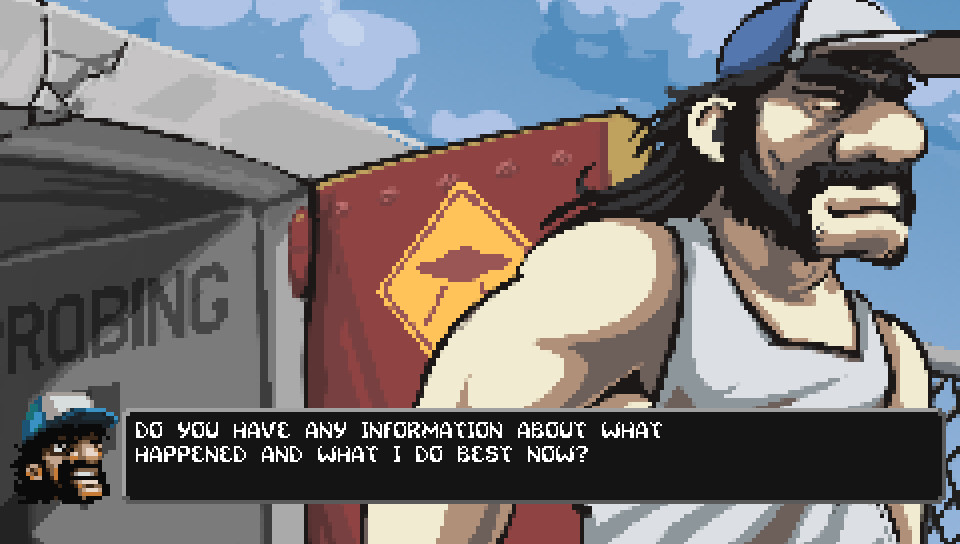 The story of Angus hates Aliens isn’t anything too complicated. You play as the titular Angus in the midst of an alien invasion and it’s up to you to single-handedly save the world. You still with me? Good. Well, that’s not entirely true I suppose, you do get hints and such from a couple of different sources, such as an alien called Princess Paura who seems to have a thing for rednecks I suppose and an army general. They help you by telling you ways to defeat new enemies as you encounter them, or what you need to do to advance through the story. Then it’s up to you to put that information into practice.

Whist you start the game in an alien ship, you get to travel through the game mowing down various enemies in locations ranging from shopping malls to laboratories, all the way to alien space ship to face off against the final boss of the game. Without giving too much away, the ending is quite odd. Not necessarily in a bad way of course, but it did come out of left field to me. Maybe that’s what they wanted the end to feel like? 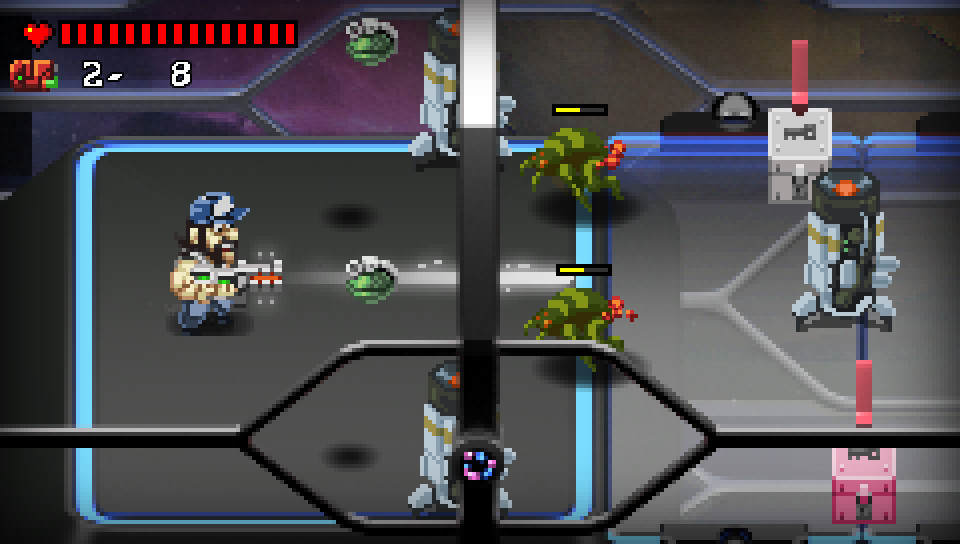 The game controls like a dream. I played the PC version, so it controls differently to how it would be on the PlayStation version. You can play the PC port by using either a controller or a keyboard depending on what you feel most comfortable with. I used the keyboard, and once I’d learnt the keybindings for the menu and such, it controlled exquisitely.

Angus can shoot his weapon either left or right, but you can’t shoot up or down. So you have to strafe around the area to hit enemies that are above or below you. I got to use my skill I picked up from playing a hunter in World of Warcraft by having to do this. The gun also reloads automatically when it runs dry of ammo, although you do have the option to reload when you choose. Also depending on which weapon is being reloaded, the time it takes varies too. Some of the later weapons take a considerably longer to reload than the early weapons. I found myself reloading all my weapons during a lull in combat to make sure I wasn’t surrounded by enemies and then having to wait for my gun to reload as the aliens clawed my eyeballs out. 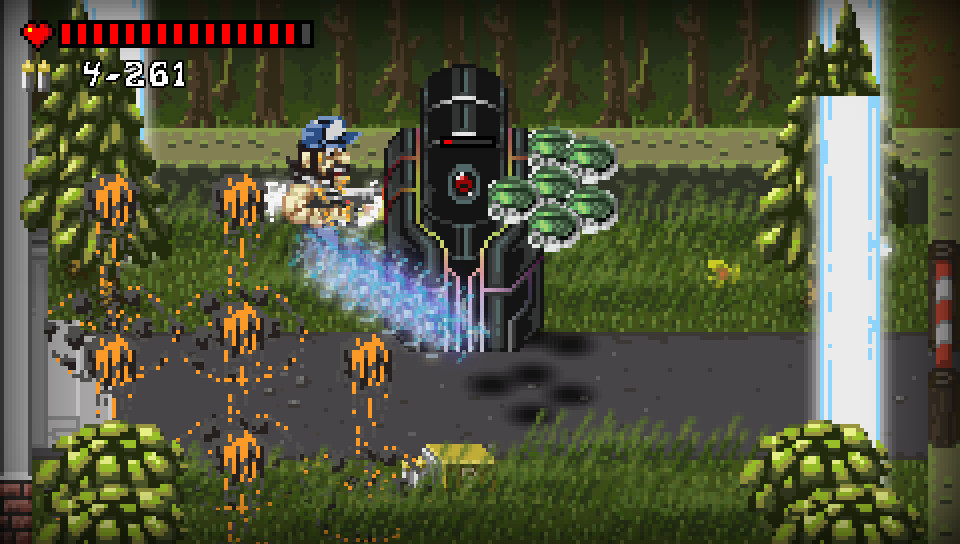 The game uses a lot of item management, with you having to juggle between whether you want to carry more ammo or health packs and what is more important to you at the time. This adds another layer of difficulty to the game in addition to the combat as whilst you want to make sure you have enough ammo so you don’t have to resort to desperately poking against a boss with a knife, but you also have to be sure you don’t have no health packs for when it really hits the fan. Health packs aren’t the only way to recover your lost health though, you can also use blood packs at ambulances which then fully heal your health bar. Probably not something to do when you’re out and about and feeling a bit peeky though.

There are various types of enemies for Angus to rip his way through, with a mixture of aliens, zombies and robots to name a few. Each enemy requires you to use a different tactic to defeat them. Some only take a few bullets to the face before they crumple like tissue paper, whereas some take a considerable amount more to finally be defeated. The game also has bosses of course. I didn’t have any major difficulty with the bosses as a whole, I had more trouble with some of the random mob enemies being spawned every femtosecond.

As I said, Angus hates Aliens has some varied locations in which Angus must travel. The areas progress in difficulty steadily as time goes on, giving you more difficult puzzles to complete or newer, tougher enemies. 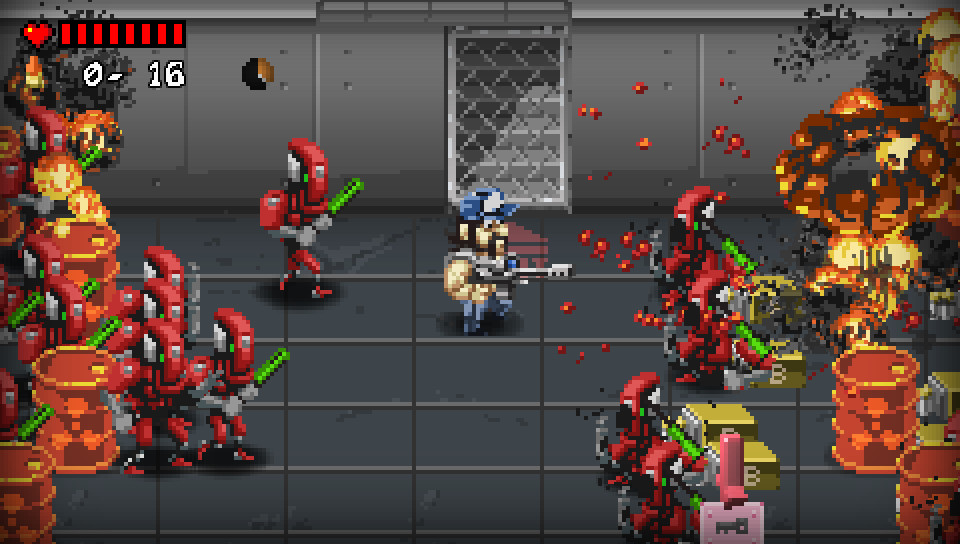 The soundtrack in this game is pretty awesome. It’s pretty rocking, like it’s literally rock music. The music also has a ‘redneck’ twang overlaid with the soundtrack which suits it obviously. One thing I will say is that the music can get repetitive especially if you’re binge playing it like I did. Sometimes it feels odd with the 16bit graphics, as my mind expects a different sort of music entirely.

I found one of the most interesting aspects of the sound design was the radio that plays during the shop screen. It plays a little loop of people talking about the zombie slash alien invasion and how to defeat them among other things. It really adds to the game as a whole and it’s not the sort of thing I was expecting going into the game. 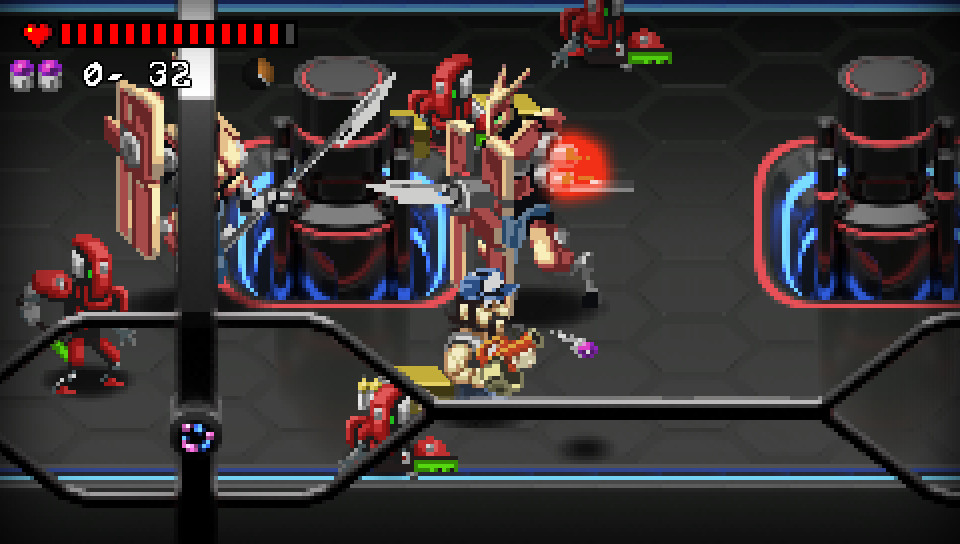 The characters aren’t voice acted, but that’s probably to be expected. Well, I suppose they’re kind of voice acted, Angus grunts from time to time when he gets hit or dies. The game does have sound effects for your aural pleasure though. Angus’ weapons have varied sounds depending on what it is, shotgun sounds like a shotgun, machine gun sounds like what you’d expect a machine gun to sound like, the alien weapon sounds like… actually I’m not sure what to describe it as. The zombies, robots, aliens and the like have sounds too.

Angus Hates Aliens is a 2-D pixel style game with some gorgeous 16bit art throughout. The graphics really work in the games favour, looking clean and lending well to the simple storyline. There’s plenty of detail put in to every facet of the game. The locations are all well detailed too, and you could easily see you were in a new place.

The animation of how, well basically everything moves, is clean and I only really saw any errors with it when I managed to get a giant robot stuck walking into a wall. That was entirely on me though. 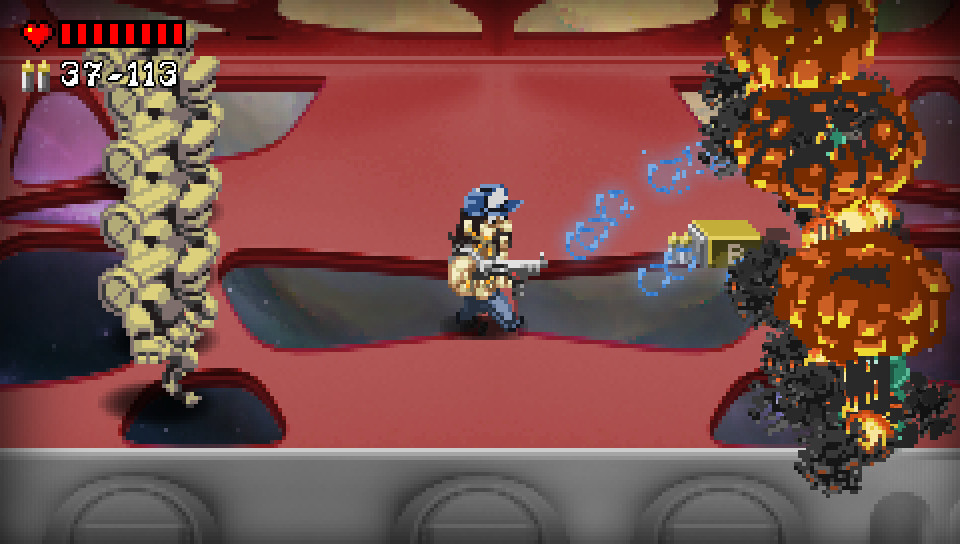 Angus Hates Aliens is a pretty fun little indie game. I spent around 7 odd hours on it which is around what the website for the game says. I played the Steam version which currently retails for £4.99. Angus hates Aliens is also out on the PlayStation store if that’s more up your alley.

For a fiver you can’t really go very wrong with this title. It looks good, plays well, and despite the music eventually getting rather repetitive, it is a really fun game. The game has a good escalation in difficulty as you go along, even though I personally found some of the mob enemies to be harder to beat than some of the bosses.

So why not go pick up a copy, help some indie developers, and kill hordes of aliens? Sounds like a pretty good deal to me.