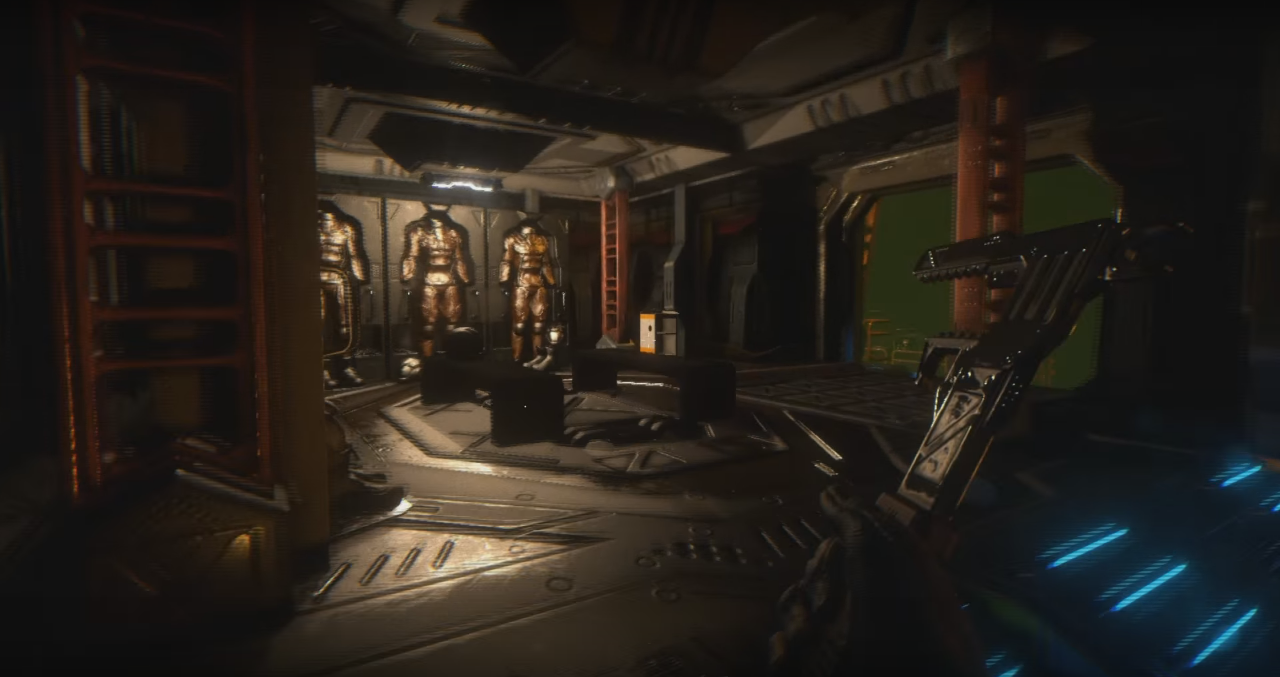 Syndrome is developed and published by Camel 101. The dev team had delved previously into sci-fi with their first Steam project, Mechs & Mercs: Black Talons. That one wasn’t as well received as Syndrome but at least we’re talking about experienced developers. 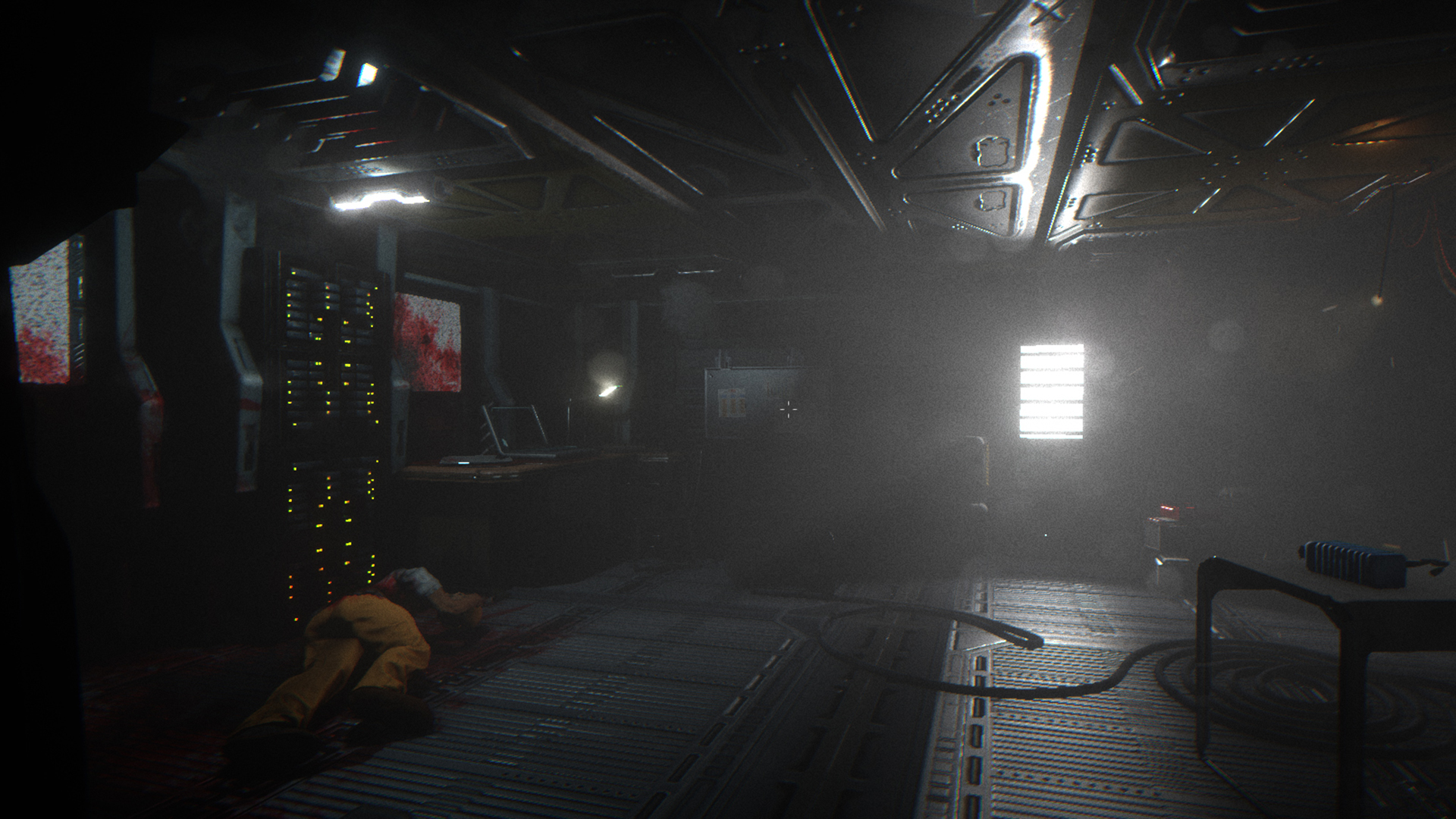 It’s becoming sort of a trend nowadays in video games, to focus a lot on style over substance. No one can deny that Syndorme doesn’t look the part and yet if you spend a few hours with it, the cracks do emerge along with several other minor issues. But we shall focus on the gameplay for now. I never make a habit out of spoiling any details regarding the stories in the games I review and thus I shall not make an exception even in this case. Suffice to say, it’s wholesomely unoriginal. You got game mechanics and tropes from almost every other space horror title that I can think of. From Dead Space, Doom and all the way to Alien Isolation. Don’t get me wrong. I know it’s rather hard to put a new spin on a tale that’s been copied dozens of times even in the film industry (Event Horizon, comes to mind) but I was expecting at least one original aspect within Syndrome. Something to set it apart, at least in gameplay terms from the titles mentioned above. You do have the option to fight back, which I really appreciated. Survival horror does not does not equate to being a helpless victim. The enemies have enough variety and even the weaponry, on the later levels. The one big problem however, the elephant in the room if you wish, has to be the artificial intelligence. Precisely, the lack thereof. For a game which revolves around avoiding threats rather than facing them head-on, Syndrome’s foes are near oblivious to sounds unless you are in close proximity and I found them to be blind as bats, when it comes to sneaking up in front of them and switching the flashlight on and off. I wasn’t expecting the kind of AI you have in Alien Isolation, for example. But when you fight and kill an enemy at a few feet/metres from another one which never reacts, that experience was just game breaking. And even if it was a pathfinding glitch, it went on a bit too much. The basic weapon of choice, a wrench, was more potent than the various firearms which proved the enemies are bullet sponges. And with ammo being quite scarce, you’re far better off avoiding many encounters and simply sneak by. And backtrack. A lot and quite annoyingly. The game’s map isn’t even that small not to accommodate a more logical liniar succession of objectives. But you still have to travel far too much between the ship’s several decks. Back and forth, rinse and repeat. 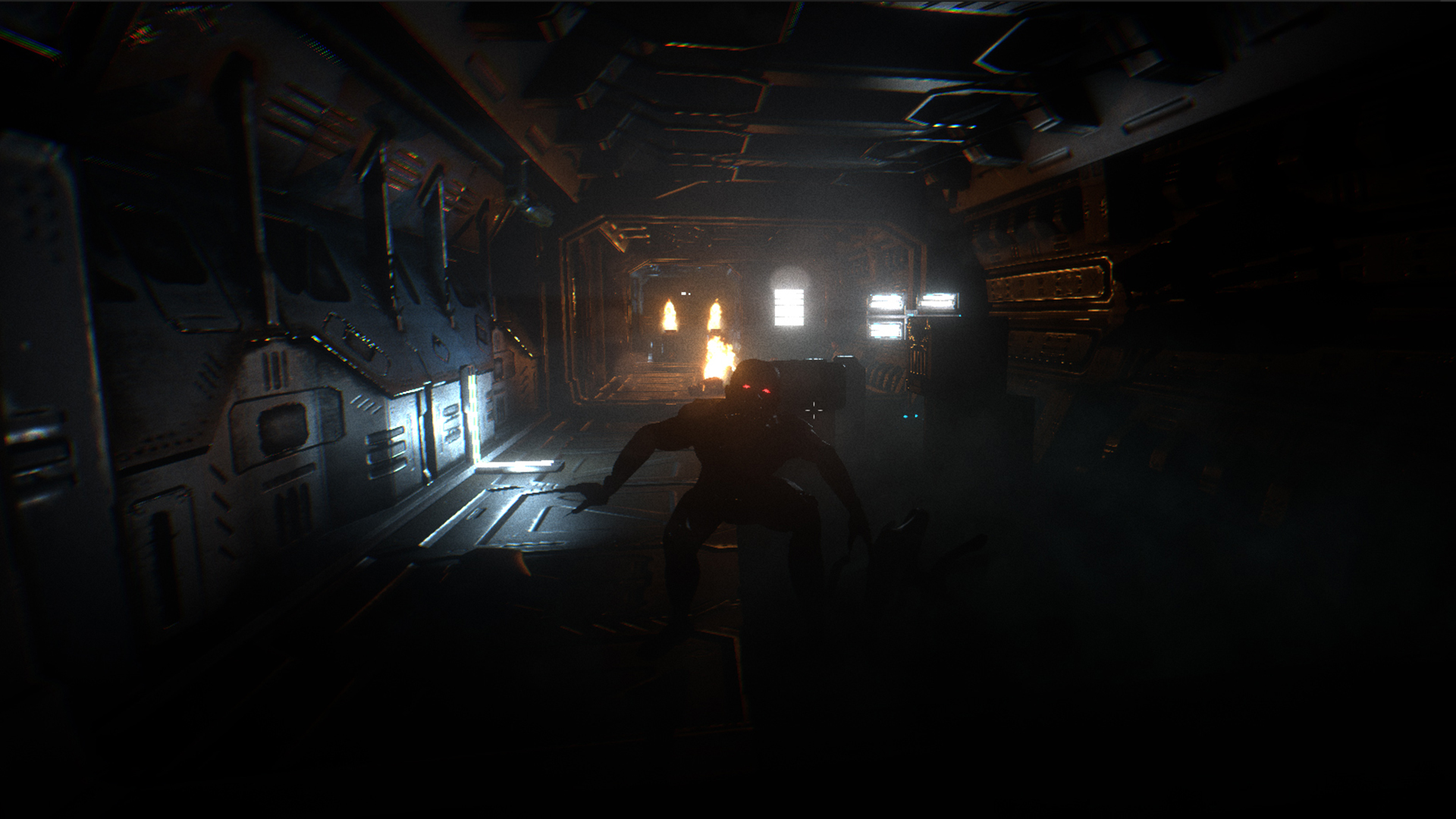 In truth, Syndrome’s saving grace comes in the form of its beautiful use of Unity assets. Running the game maxed out, you will become more forgiving of its shortcomings and appreciate the atmosphere it creates through the careful use of audio and visual cues, mimicking hallucinations. Witnessing more graphic scenes or being chased by your foes, does trigger some nice effects which I personally found welcoming even if Syndrome has no jump scares. It creates tension nonetheless. Even if good looks aren’t as decisive in a video game as they used to be a few years ago, you still have to acknowledge the efforts placed into this title. 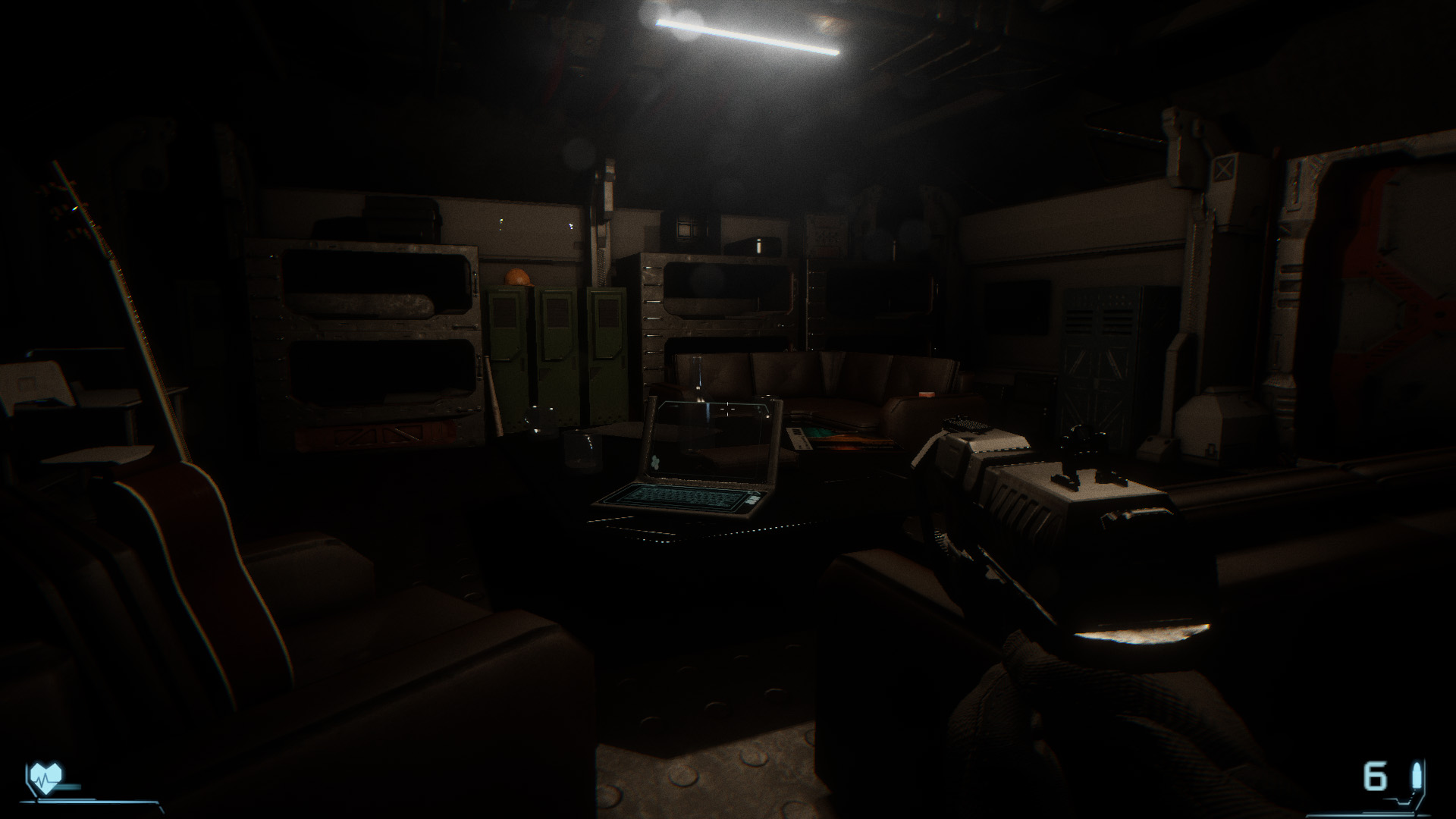 – Unoriginal story and setting
– Weak AI
– A lot of backtracking 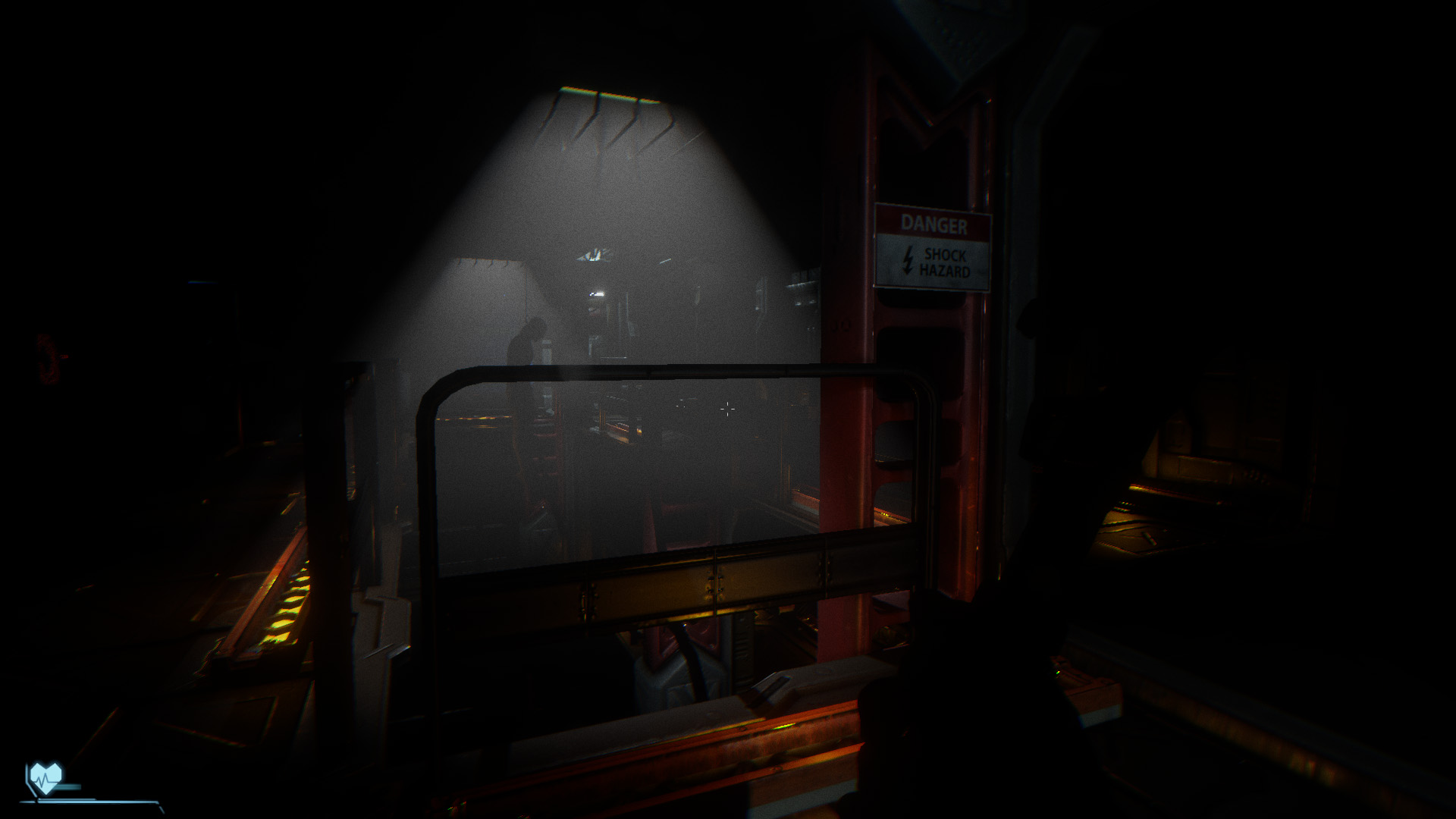 Despite its unoriginality, I do declare myself a fan of this sci-fi subgenre and appreciate its small, several attempts to set itself apart from the titles it draws inspiration from. Even if it fails at that, I cannot overlook the dev team’s masterful use and manipulation of the Unity 5 Engine. It could have been a far better game but even as it stands now, you won’t be disappointed by Syndrome. Trading cards and achievements complement the offer and ensure that even Steam collectors have a little extra something to remind them of the game.