REVIEW: The Girl and the Robot
Add comment
Share:TwitterFacebookRedditPinterestWhatsAppEmail 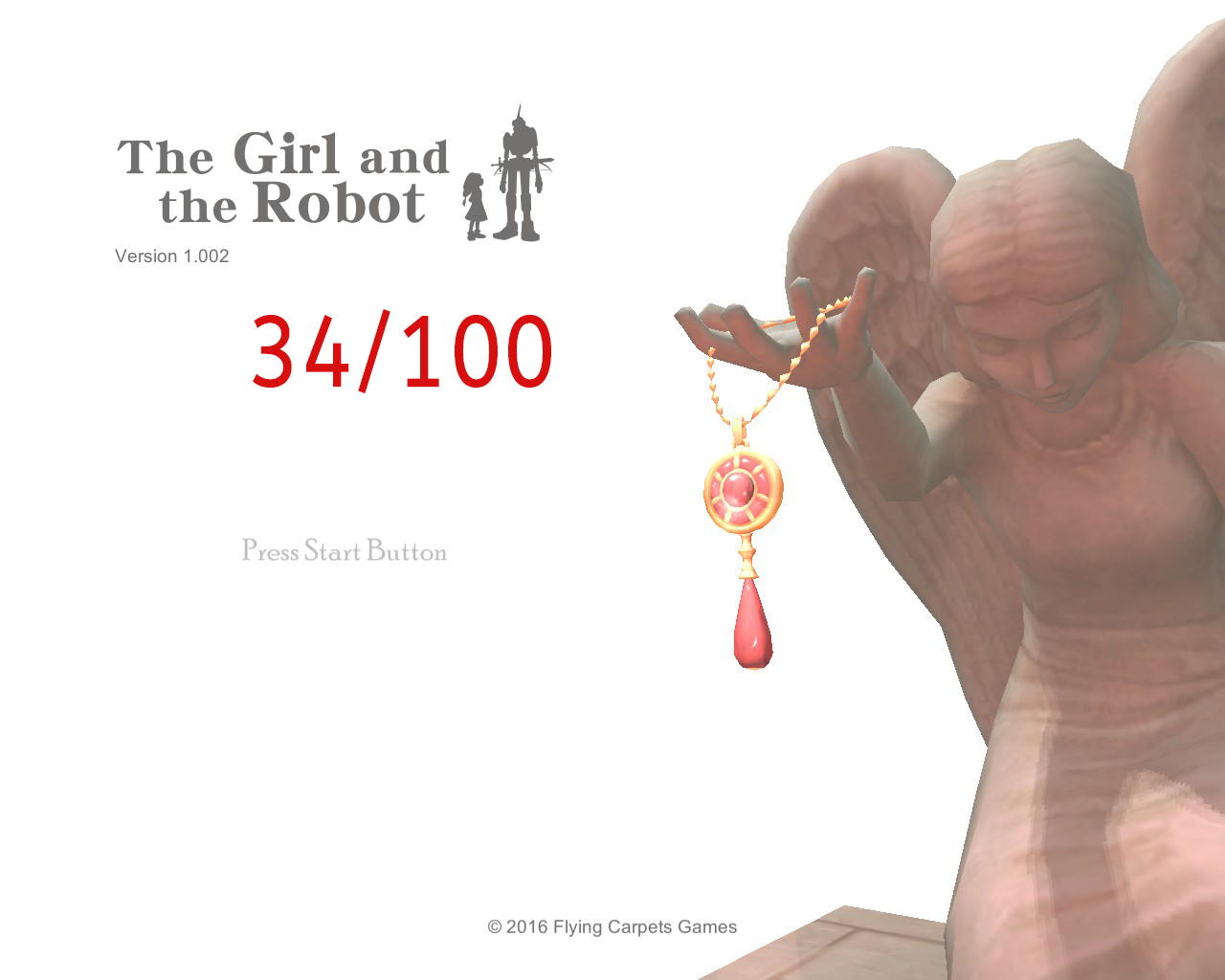 REVIEW: The Girl and the Robot

The Girl and the Robot is a third person action/adventure game set in a fairy tale world. You take on the role of a young girl who is trying to escape from a castle ruled by an evil queen with the help of a robot that you take control of via a magical amulet you conveniently find upon being freed from your prison by a mysterious old man.

I wanted to like The Girl and the Robot. I really did. 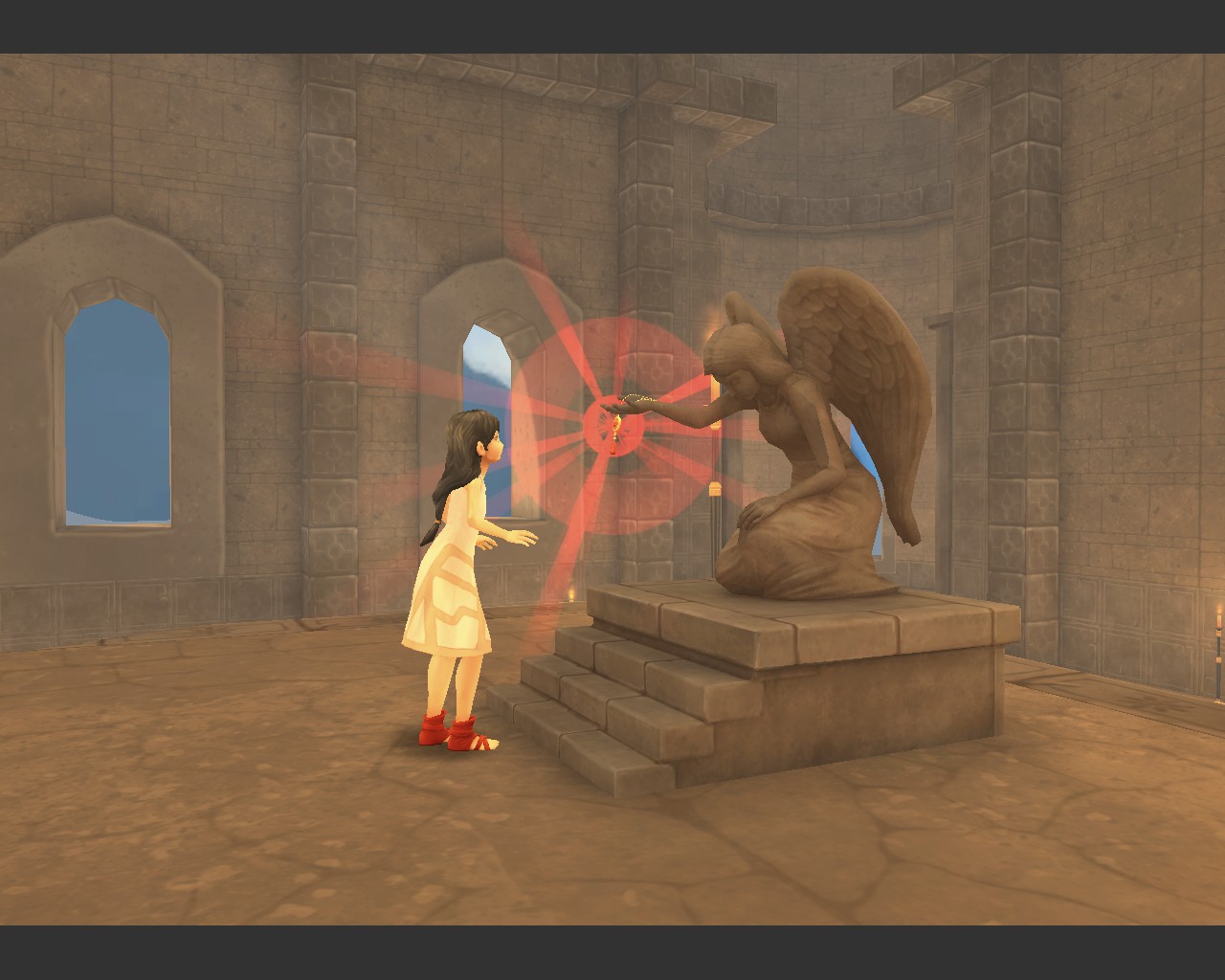 It’s a great idea: controlling two characters in order to solve puzzles much in the style of games like Papo & Yo or Contrast. In this case, instead of a boy and a monster or a girl and her shadow, you play as a little girl who was confined, for whatever reason, by an evil queen, and a robot that she controls via a magical necklace. 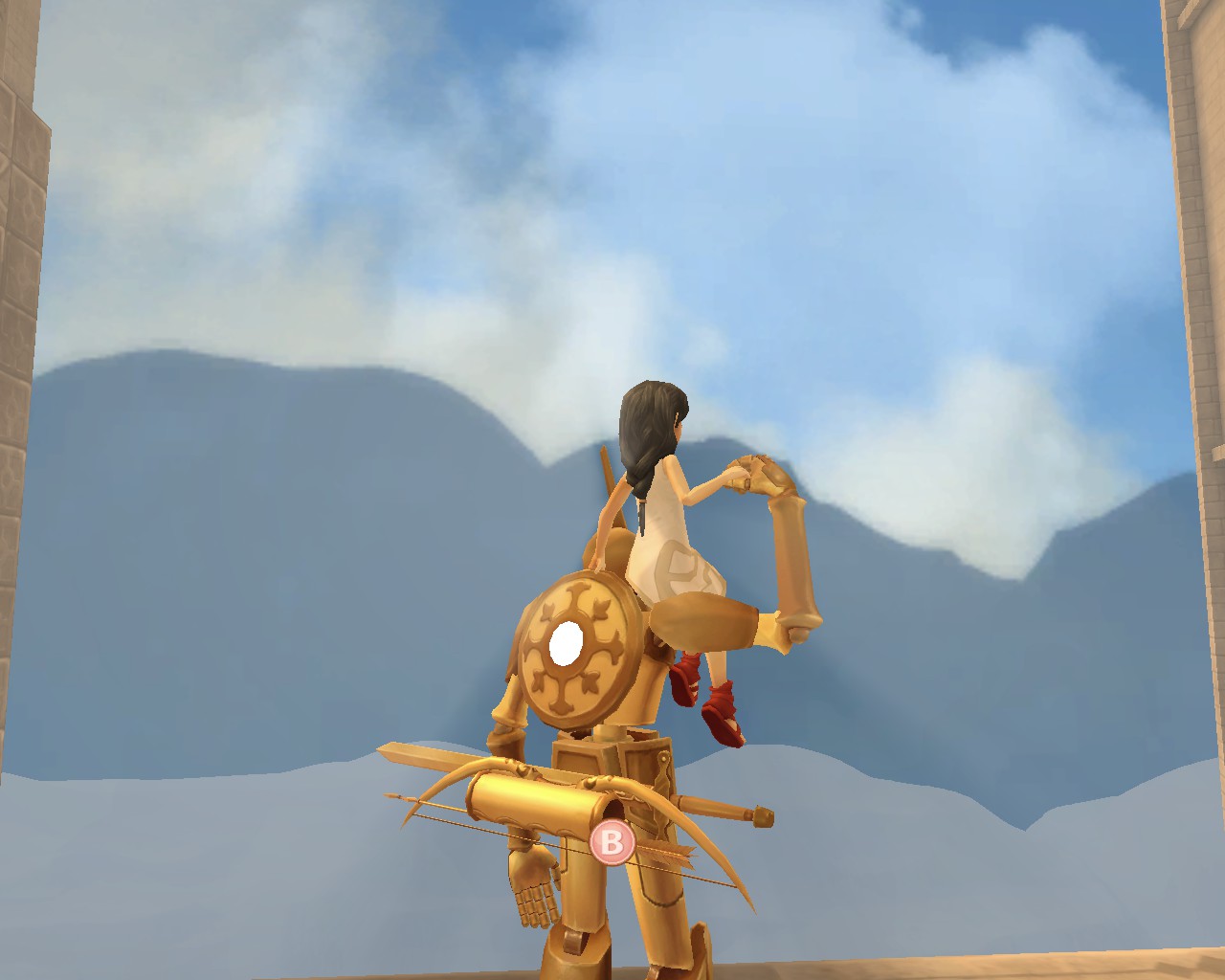 The puzzle solving consists of swapping between characters in order to reach previously unreachable areas. It’s only with team work that escape is possible—especially considering the little girl can’t fight for herself.

It’s got a nice atmosphere: the music is lovely and the world—a place filled with violent robots and devoid (for the most part) of human life—is passably nice to look at. The graphics aren’t anything spectacular, but that’s not really a problem.

It’s got abysmal controls—both camera and character. Despite the fact that this is a PC port, the game is nearly impossible to play with a keyboard. You can move with WASD, jump with space bar… And not much else. I’ve pressed every button on the keyboard to no avail. There‘s no way to rebind the controls in the barebones options menu either, so a controller is your only option here.

The first time I loaded up the game, I realized this after managing to open a menu using the escape key and being unable to close it after pressing every other key on my keyboard. So I plugged in my controller… And the game didn’t recognize it. No harm, no foul. I closed the game and started it back up and—eureka! The controller worked so I started playing the game. Unfortunately, I made the mistake of tabbing out of the game for one reason or another and the game stopped recognizing my controller.

The experience went downhill from there.

Walking around is clunky and ungainly, partially due to the awkward camera and partially because the animations themselves are, well, clunky and ungainly. This doesn’t get any better with the addition of another character, a robot. Picking up your miniscule mistress makes your movement slow down and you absolutely have to carry her if you expect to progress. The robot won’t follow behind you, so most of your time will be spent controlling him, carrying her, and plodding around slowly. 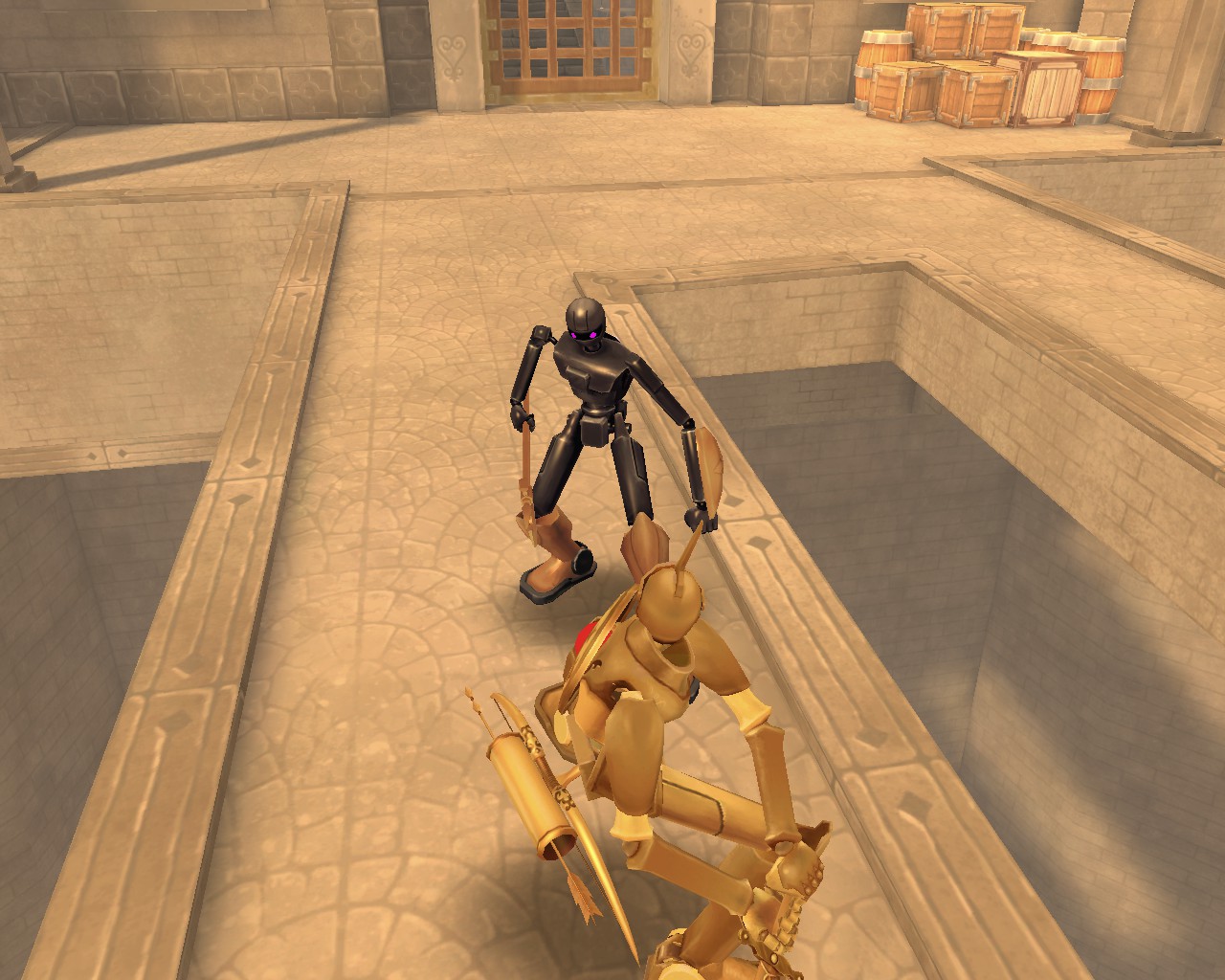 Combat is just as awkward. You can chain together up to three melee attacks, and the awkward camera tends to swing around so that you lose sight of the enemy and it bludgeons you to death. The enemies tend to block your attacks, leaving you wide open and unable to defend against their strikes so that they can finish you off quickly. 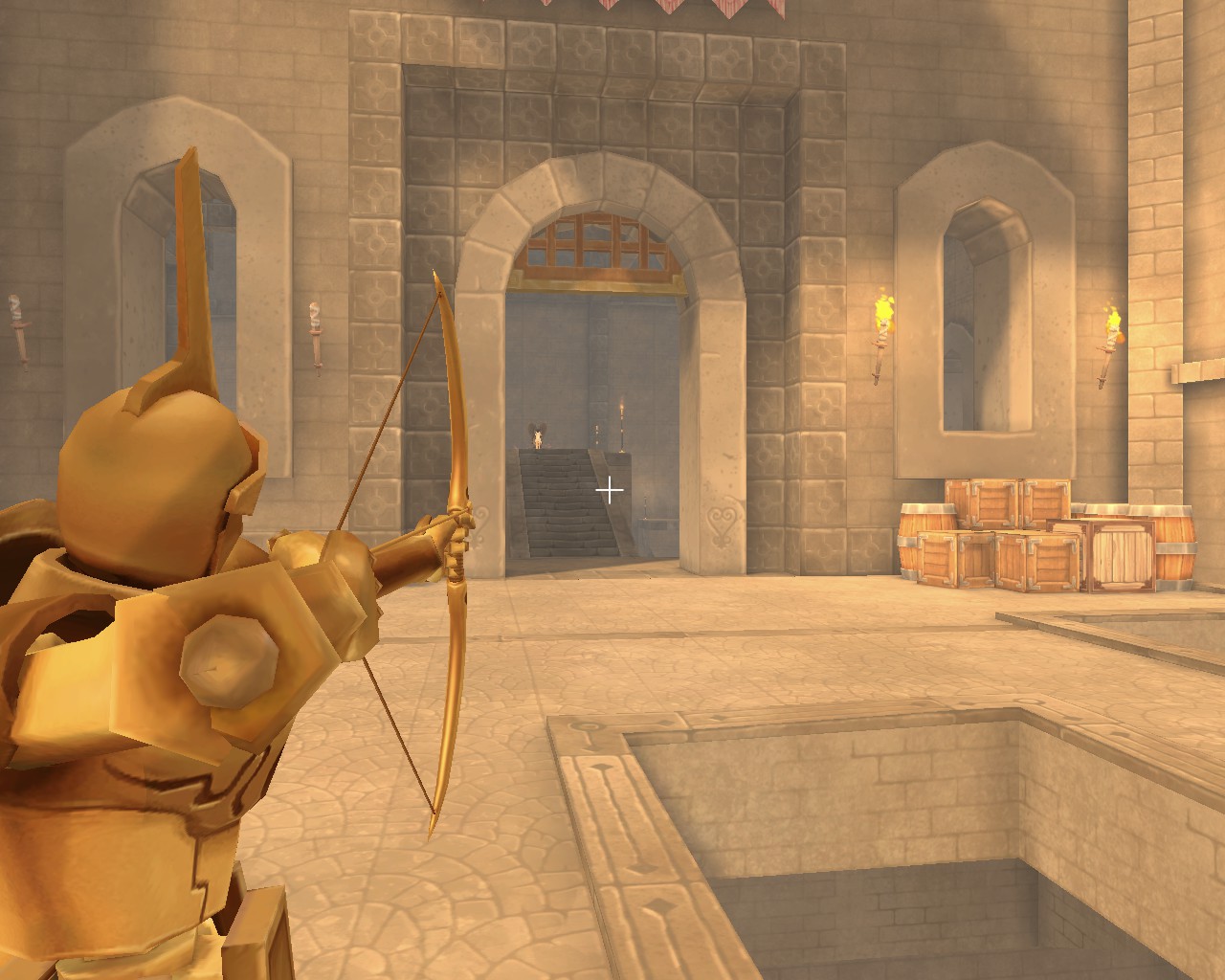 You can also fire off a bow, but lining up a shot takes so long that the enemy will inevitably smack you around before you can even fire off an arrow.

You can only get hit a few times before your robot explodes and it’s game over. In fact, you’ll see the game over screen often through a mixture of awkward combat and the little girl’s fragility. She can’t fight for herself, so if something attacks her—game over. If she falls from a height—game over.

My final straw was when my progress was cut off entirely—not by a particularly difficult puzzle or enemy—by the game itself. The lift to get me to the level above disappeared entirely and, even after exiting and restarting the game, it would not return.

I’m not willing to play through the game again—especially considering the fact that getting to that point in the first place wasn’t any fun.

This hastily done port was put on the Steam store before it was ready. If you really want to play the game, it would be best to do so with a controller and a lot of patience.

34/100—The Girl and the Robot is a mixture of good ideas, but the execution is poor on all accounts. I wouldn’t advise anyone to buy this game unless it’s been bundled and you’re curious. Save yourself a headache and spend the 9.99USD on Papo & Yo or Brothers: A Tale of Two Sons. Both have been bundled before, though even at full price they’d be a much more worthwhile use of your cash and time.