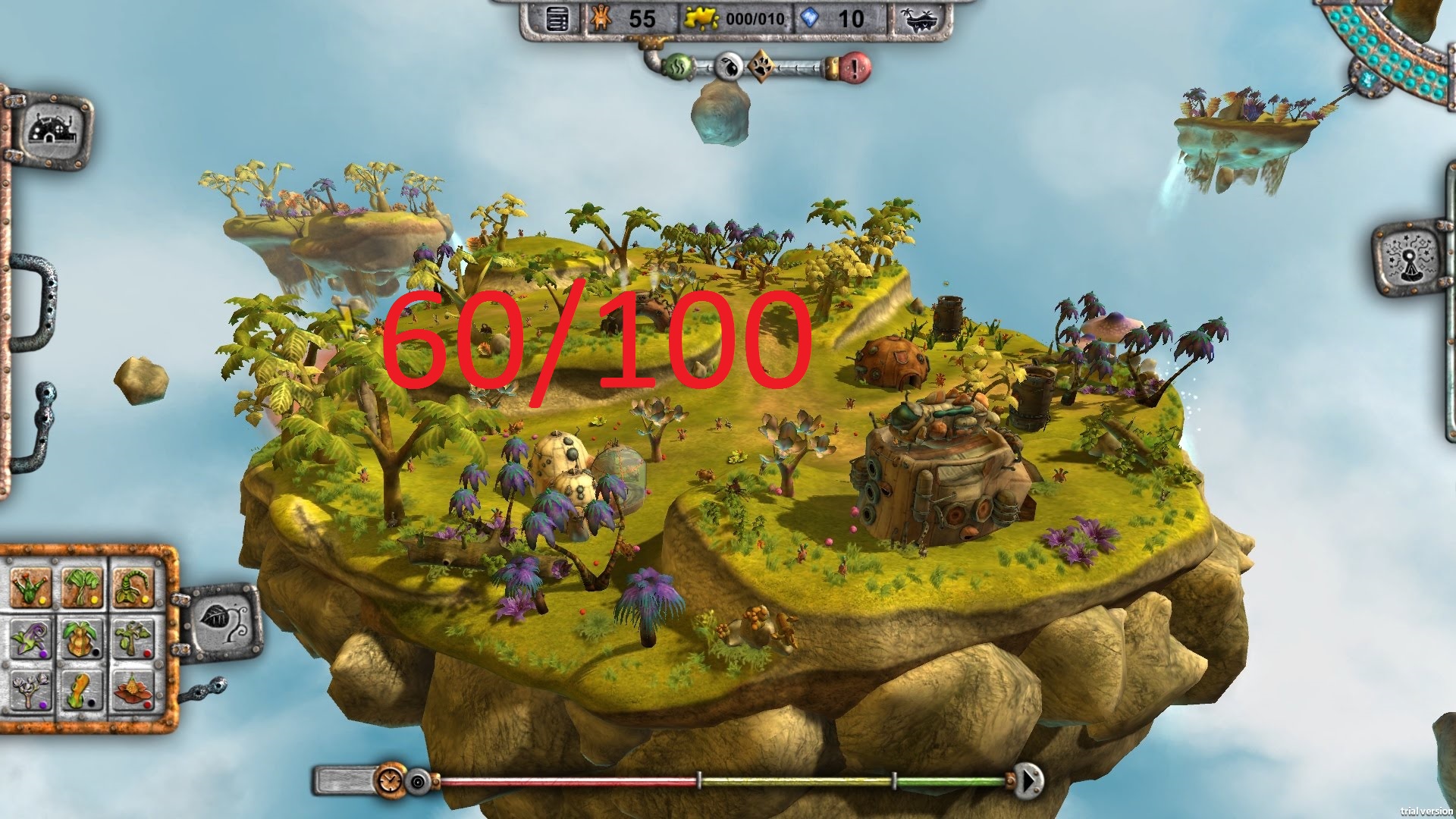 The Mims Beginning is a god-sim, strategy simulation game released by Squatting Penguins where through divine intervention you help the MIM race find parts for their crashed spaceship and thrive on any number of floating rocks each with its own challenges.

The MIMS Beginning gives you the godlike power to build structures, create new and wonderful lifeforms, like robot chickens and weird phallic banana spitting trees as well as being so ultimate in power you can set enemies on fire and predict the future.

The game itself plays out like any number of god-sims. There are resources that you will need to generate. Bio-energy is generated by the aforementioned banana-spitting trees. Your mimes collect these bananas and use them to generate bio-energy.  The other resource is psi-energy which is in essence a sort of magical energy and allows you to cast psi-spells, such as psi-shock or fire. Psi-energy replenishes automatically, and the amount of psi-energy you have can be increased by upgrading your Psi-tower. The third type of resource is gems, you start off with some and you can mine a few from the level itself. There is a finite supply of these gems, and I’ve found that it is the use of these that needs to be watched. Other buildings such as the Research Centre allow you to research technologies that will further help your MIMS such as Happy Attitude that increases stamina by 30 and Super Throw which doubles their throwing distance. This research takes bio-energy and gems. The bio-lab allows you to create new and wonderful fruits and animals, and the Space Port gives you a structure where you can sell off your own misconstrued acts against nature. As you would probably expect, you are not often unopposed in all your doings, there are enemies and creatures out for your MIMS blood, but you can build garrisons and units to keep everything hunky gory.

There is one criticism. The MIMS Beginning has no mid-level save function. This is odd to say the least. Either the developers are expecting every player to spend hours at their computer without needing to save, or it’s a plan to ensure each player rushes through each level as quickly as possible. I can’t see why they would do that though.

The control system is essentially little more than clicking with the mouse. Click on what you want to build, cast or create and then click on to where you want to put it. If any part of the footprint shows as red then it can’t go there. I wouldn’t really expect the control system to be very complicated on a god sim, and in the MIMS Beginning this holds true. I don’t think I even touched the keyboard while I was playing this. I like it when they keep things nice and simple.

Graphically, it’s ok. Ok, I can probably go a little better, it’s somewhere between ok and good. When you’re actually playing The MIMS Beginning the graphics are all well and good and I don’t really have any complaints. However, during the cut-scenes when the camera zooms in to all your little MIM-ions, the graphics get a little blocky and look rather unpolished. It’s not overly offensive or jarring and doesn’t deter the player from the game, but it is a notable decrease in graphical quality when you’re close.

The game itself is a little on the easy side. Once you realise that gems don’t just grow on trees, there isn’t infinite space and you can’t just place down any buildings you want willy-nilly things generally roll through at a standard pace. That’s not to say you can afford to get complacent. You can still be attacked by any number of creatures or even vermin if you have too much fruit, run out of resources or space or both. If you look at each level and strategically think about the structures you’re placing, you should do fine. 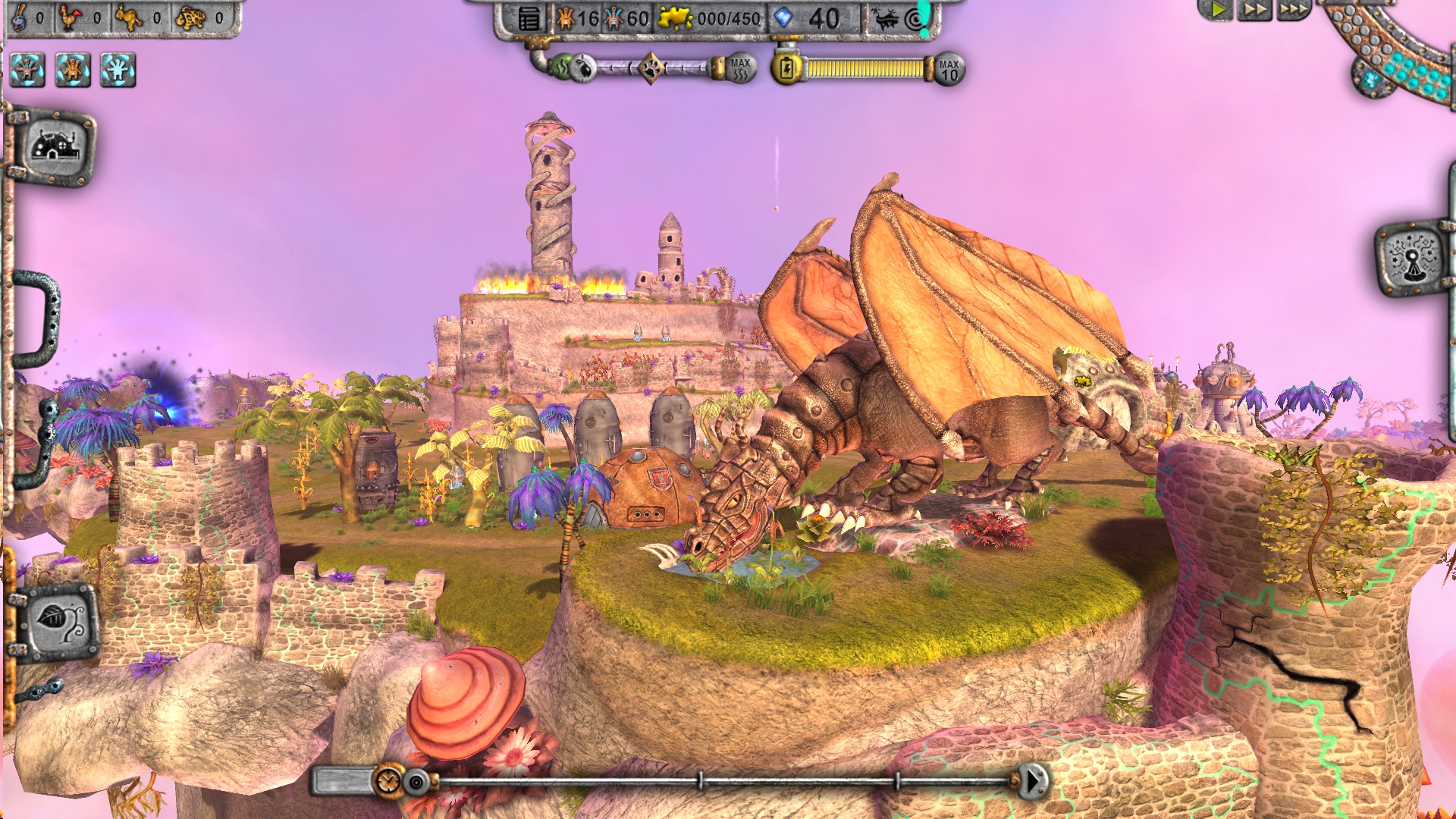 The MIMS beginning doesn’t have a great deal to bring you back. Once you’ve completed the game, and saved the fantastical MIMS, there’s no real reason to come back. You could of course simply start again and attempt to do things in a different way, but there are no reward unlocks, or game difficulties, no alternate storylines or alts. Unless you are a die-hard fan of the whole god sim strategy game, you might not be overly driven to come back and play it through again. As a distraction for a few months it serves its purpose but a game you could be coming back to after months, probably not.

Overall, I like The MIMS Beginning. Apart from the complete lack of in-level save the game stands up well to many of the other god-sims out there and does at least provide humorous little comic twists and flashes of humour in its storytelling. The gameplay is simple and the look of the MIMS is endearing if not a little odd (eyed-tentacle heads anyone?) For the price you might be able to find better god-sims out there but not many. Taking everything into consideration, I think that the MIMS Beginning is worth taking a look at.