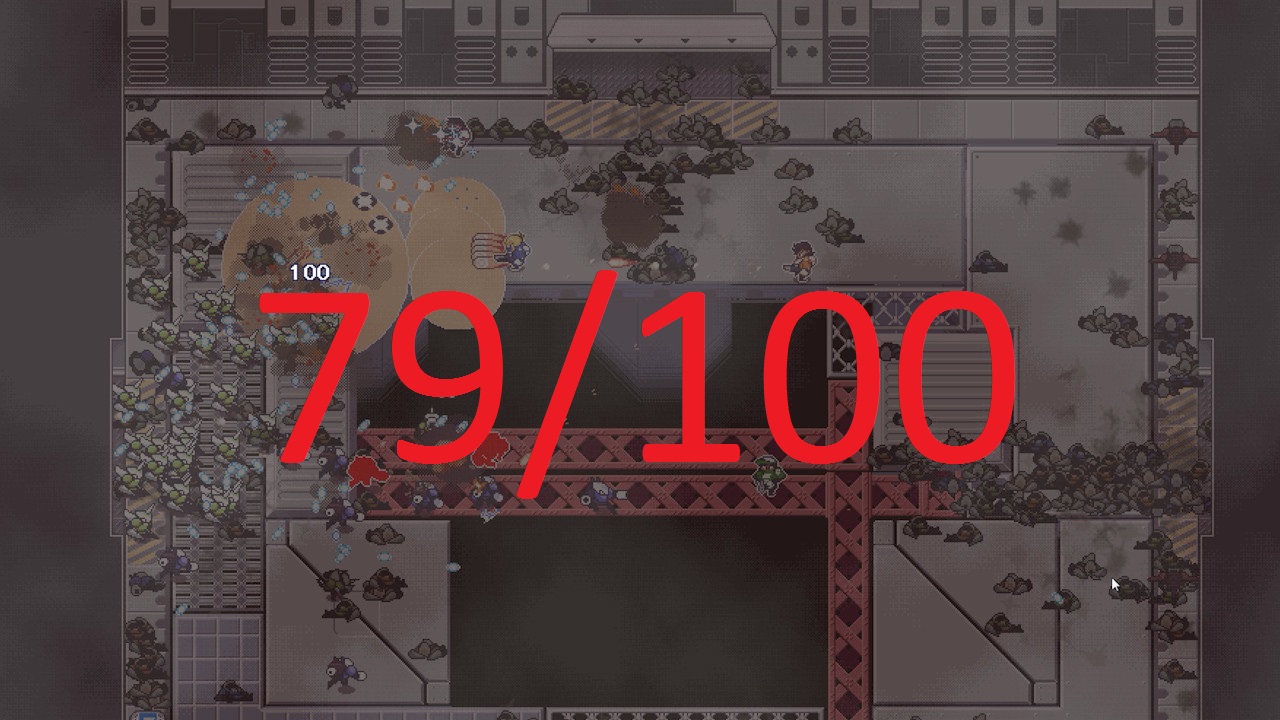 I’m not very vocal about this, but I’m actually a big fan of top-down shooters and bullet hell games. That being said, I don’t play them very often. That’s why I took the opportunity to review this game, to see if it would scratch an itch left untouched for years. After playing for a few hours with friends and myself, I think this game managed to scratch that itch.

You shouldn’t be expecting much when it comes to graphics for a game in this genre. However, I will say that it does recreate the retro/arcade feeling well, and compared to other top-down shooters I’ve seen, it feels more authentic. However, one qualm I would say about the visuals is the fact I have trouble telling the robots apart from one another. I usually just view them as, “Okay, there’s another guy to shoot.” It would be nice to be able to distinguish the robots from each other. Did you expect a huge paragraph talking about this game’s graphics? I didn’t think so. It’s still pretty nice though.

You’re probably reading this to see if the overall gameplay is good or not. For a game like this, if the gameplay isn’t good, then the game probably won’t get much positive feedback. Now here’s what I want you to do. Read that second sentence again. Now I want you to see if I gave this game a thumbs up or a thumbs down. Read that second sentence one more time. Get where I’m heading with this? Anyway, I loved the idea of the weapon upgrades, and it makes the game feel a lot more interesting. It makes the game feel more difficult (in a fun way) and also less “spammy”, which could’ve killed the whole experience. 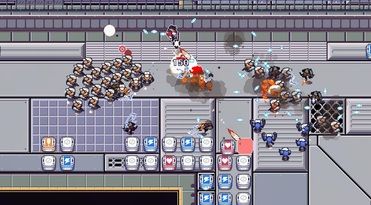 Also, the game is much more enjoyable with friends. I haven’t played too much of it with others, but from what I have played with them, the game is definitely more entertaining. My one issue with the gameplay is that I can’t seem to find a use for the shield. Maybe it’s just me, but after all, this is MY review. I’m supposed to tell the reader my thoughts and experience with the game. I couldn’t find myself using the shield that much. I would recommend that the shield feels more “necessary” in some cases. For example, there could be a type of enemy with attacks that can’t be avoided, so you’ll need to use the shield. Aside from the bit with the shield, however, the gameplay is very enjoyable.

Go down to my verdict if you want me to elaborate. There’s no overall story at the moment. However, it seems that the developers are trying to create a world of their own here.

Honestly, there’s even less to say here than in the graphics department. There’s no voice acting, and the audio overall is solid. Not great, not terrible. There’s music, too, but I found it to be forgettable for the most part. I wish the soundtrack could’ve been a little more exciting.

The good thing about Circuit Breakers is that the replayability is surprisingly high. This game is an EXCELLENT time killer, and I wouldn’t be shocked if you put a fair amount of time into it.

With the fair and difficult gameplay. the fact that more content is on the way, and a few other things I don’t feel like listing, you could put a lot of time into this. I’m going to have to keep this installed on my computer in case I’m ever bored. It’s a great way to pass the time.

Overall, Circuit Breakers does have a few flaws, but the game is incredibly fun. There’s even controller support, and although you may have a few problems with it at first, the bugs involving it are too minor for me. Add that with the fun co-op gameplay, the weapon upgrade concept, and high replayability, and you have yourself one of the best time wasters Steam has to offer.