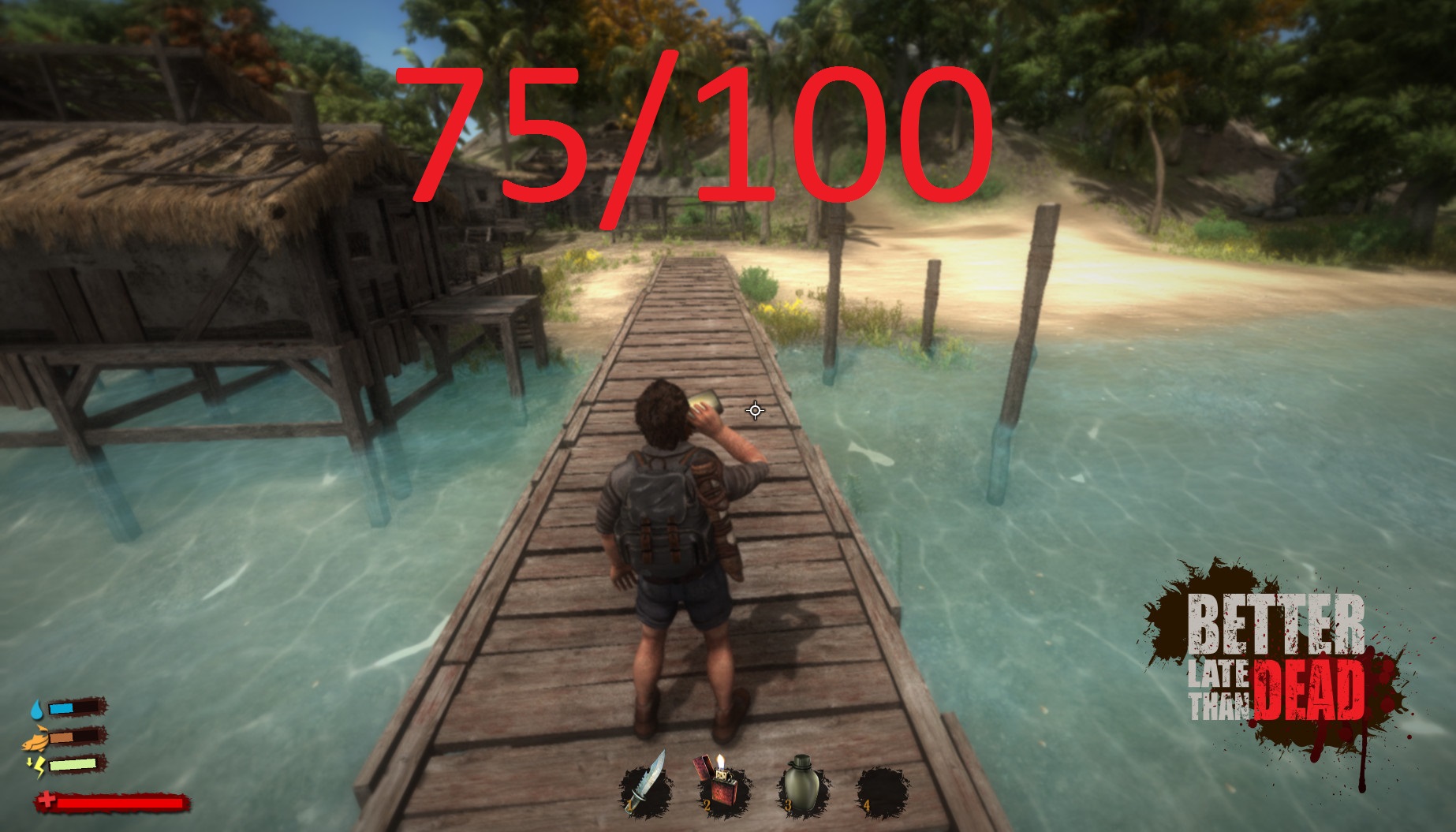 I’m a big fan of sandbox games, primarily because I hate being told what to do, and secondly because it allows that level of expression of your playstyle within your gaming experience. So when I got the chance to review ‘Better Late than Dead’, an island survival game developed by Odin Game Studio, I was genuinely excited and very curious to play it.

So, let’s start with the storyline. Well, rather than wax lyrical through scene after scene of storyline, Better Late than Dead pretty much just drops you on an island with no memory, and a picture of a child. As you explore the island, the storyline starts to form, scientists had used the island, and now they all tend to do very little except lie there being dead in body bags. The fact you’re not overburdened with storyline, actually helps your connection with the game. In that, at first you’re as clueless as the protagonist, and you share that isolated feeling both in knowledge and purpose.

This game is definitely high on the sandbox scale. When you wake on the island, you’re pretty much on your own except for a bottle of water and a few mangos. There are no quests to follow, no markers in the sky, no mini-maps or glowing trails leading you to your next objective. In short, your only objective is worrying about surviving until the next day, and any spare time you have left should be exploring and finding out as much as you can about the island. The only help you have is the odd note left by the previous inhabitants.

As you explore, and interact with the island, you start to discover the main risks of the game, namely thirst, hunger, energy, and your health, which brings in factors such as broken bones, bleeding and being poisoned. So, you need to quickly figure out how to get water, food and how to survive attacks from wild animals and so on, and as you can’t pop down to your nearest pharmacist you will need to come up with some more self-sustained methods of survival. This is where your ability to craft comes in. 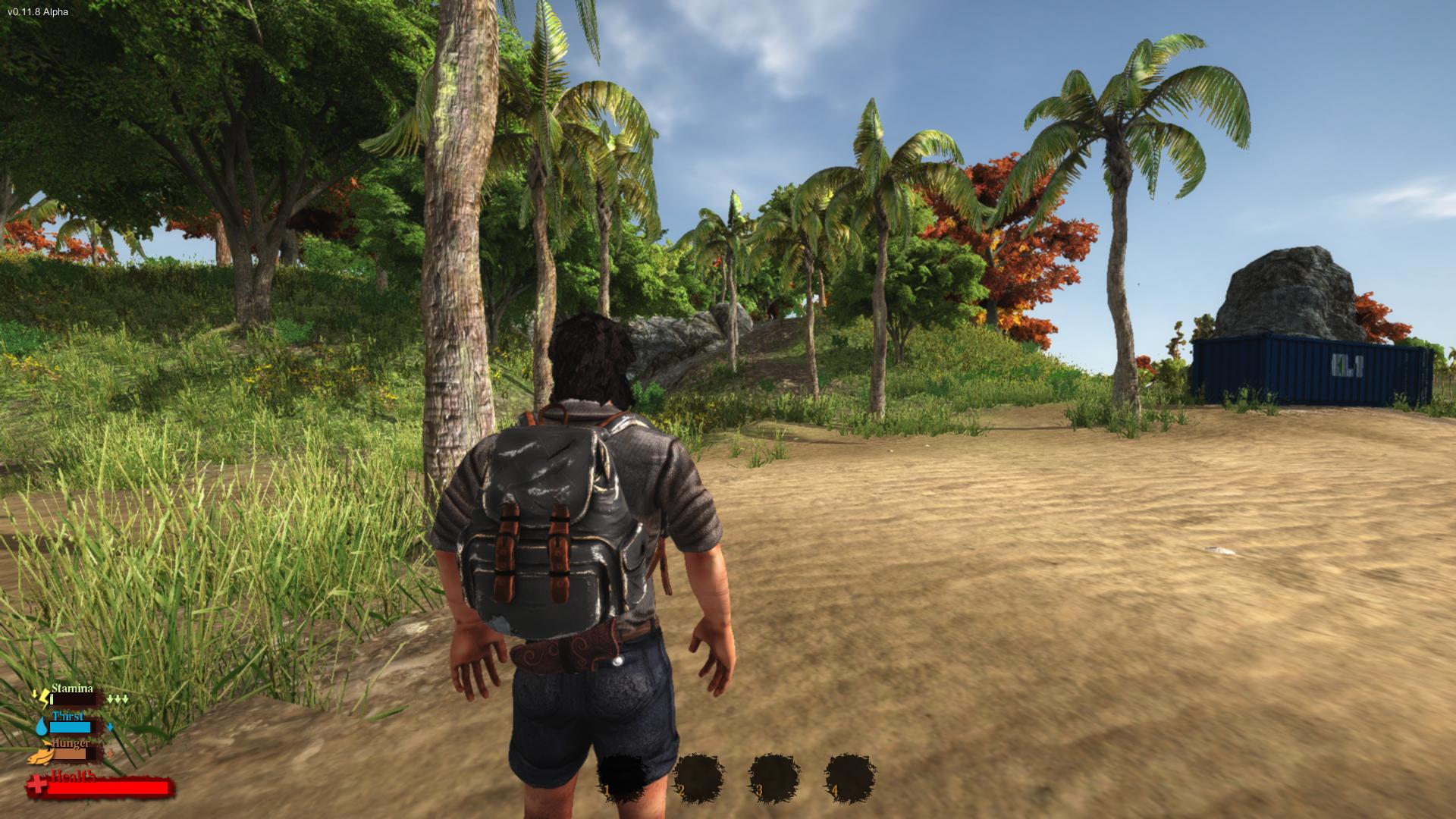 Crafting can be crudely split into two areas, gathering the materials and crafting the items. Items can be gathered  from a number of different sources, meat can be obtained from killing animals, fruit, wood and coconuts can be shaken down from the trees, and the previous occupants of the island have left a few objects, like knives, lighters, and bottles of oil lying around in crates for you. You only have a limited amount you can carry as well, so don’t think like a packhorse and grab everything you can, grab smart. Picking up a knife is far more useful than a tenth coconut, unless you have eleven knives of course.

Once you have a bag full of items you can look at combining them to make useful objects to assist with your survival. Within the crafting the panel, you have access to all the objects you’re picked up plus a function buttons such as ‘cut’ and ‘tie’. To create something just click on the objects you want to use plus the action you want to do. For example, if you select a piece of cloth from your inventory and then the cut icon, clicking on craft will create a bandage. (I.e. you’ve cut the cloth into bandages). There are a few things in here that aren’t quite right for me, you are given a number of recipes within the crafting panel as soon as you open it, I would prefer it if this panel was empty and you had to find your own recipes, although I appreciate that this would increase the difficulty of the game. The other little thing is that the items have to be added to the crafting panel in a certain order. For example, a campfire can be created by clicking on stick, stick, reeds, and then tie. Trying stick, reed, stick, tie or any other combination won’t work. Having said that, I do quite like the crafting system with BLtD I just wish it could be a little more expansive and a little more flexible.

Graphically, Better Late than Dead is good. It may not be as polished as some of the bigger franchise games, but the landscapes are nicely done and the player character is well done enough for me. I love the atmosphere that they have created within the game, the days are bright and sunny and peaceful, and you do get a real feel of quiet isolation. Then night-time falls, and everything gets dark. I mean really dark. If you don’t have a torch or other light source with you, can barely see your character and the same island now feels claustrophobic, intimidating and creepy.

I quite like Better Late than Dead, I think it has a lot of promise. What Odin Game Studio have delivered so far, is a good starting point. From a sandbox point of view, it does truly feel like you’re on your own, and at the early part of the game you share your characters confusion in what he’s doing there and what he needs to do. It all ties in quite well. Add to that the very atmospheric style of the bright days and pitch-black nights, and it just works as an empty canvas for your own play experience.

It’s not without its problems of course. The crafting part of the game, which let’s be fair is what your characters survival is hinged upon, is a little sketchy. I would have preferred a more gradual learning curve in regards to what your character can create, and the logic around order of objects when creating but these are relatively minor things that can be addressed at a later point.

All said and done, Better Late than Dead is a good sandbox game that delivers on the quality of its sandbox content, it just needs a little tidying up around the edges.