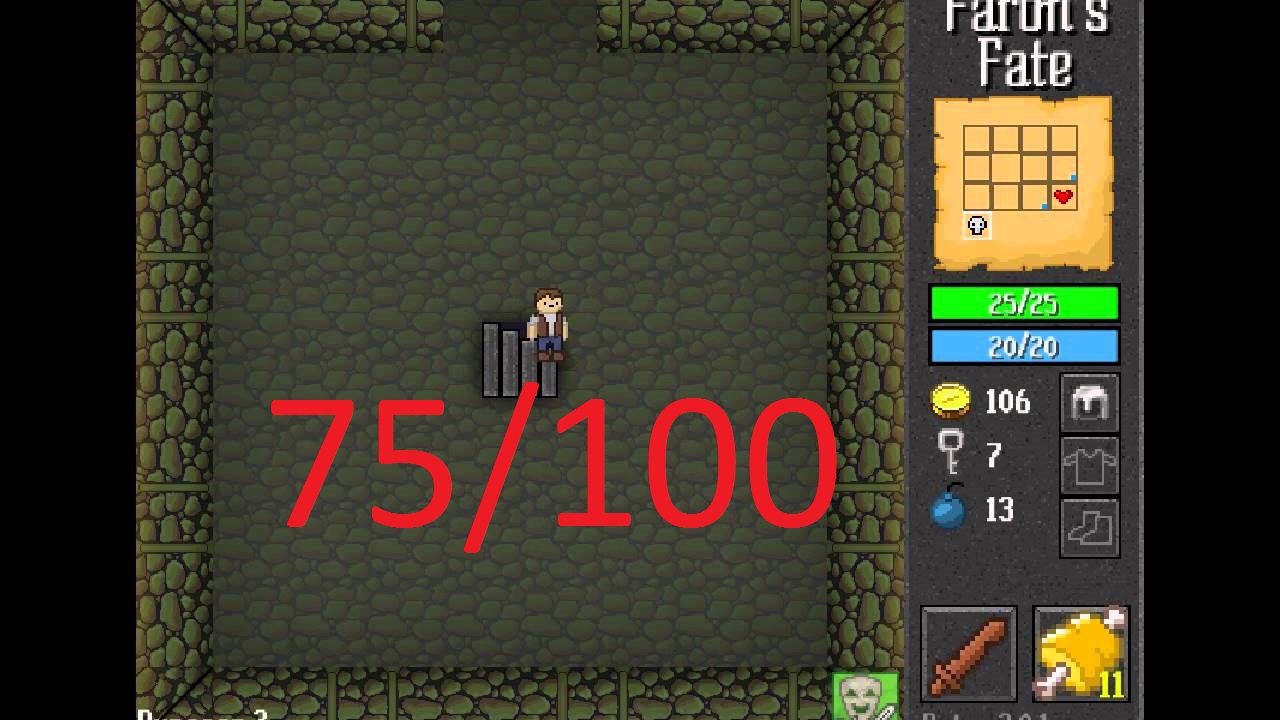 It’s amazing what a single person or a group of few people can do. Faron’s Fate is an example what can you do with a low-budget, low graphics, basically everything low, but in a good way. You’ve probably heard for hundred times already, about some amazing indie game, but I don’t see a reason why we wouldn’t praise each good game. As I said, Faron’s Fate is a roguelike and dungeon based game with procedurally generated dungeons. Don’t expect to see some beautiful graphics, but pixel graphics is what makes this game great, same as the music and sound effects. When you put every component of this game together you get one superb unity.

For me Faron’s Fate is a game to be played only when you want to take a rest from more serious games. You will never start the game in the same way and you will never finish the game or should I say: you will never die in the same way. Procedurally generation is the reason why you will never be bored with this game. Each time you start the new game, new set of enemies and bosses are generated, new items, as the positions of the tiles in the dungeons. The game produces that feeling that drives you to play more and more, you know, just one more game. 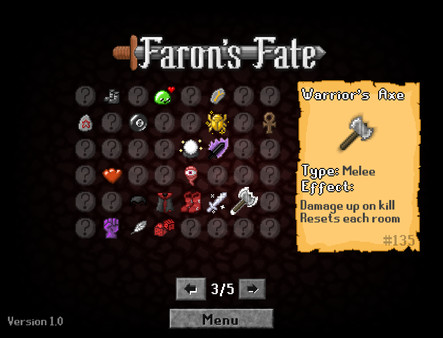 There are three main game modes and three sub game modes. Normal run is for us normal people, Seeded run is made for you and your friends and Challenge Run is for everyone. Under Challenge Run there are: infinite run, time attack and boss rush. Game modes are just one more reason why you will not be bored with this game. Average time that I spend in the normal run is around 15 minutes, but as you play more the game and get better, you will spend more time surviving throughout the dungeons, caves and other locations. Boss rush mode is very fun mode to play. On each level you have to kill four bosses. For each boss you get either one or two tokens and with those tokens you can “buy” equipment as bosses on higher levels are of course harder to beat. The only difference that I’ve noticed in Time Attack mode is that difficulty of the game is increasing over the time and in the first tile you get four items immediately and map is discovered. Infinite Run seems just like a normal run. 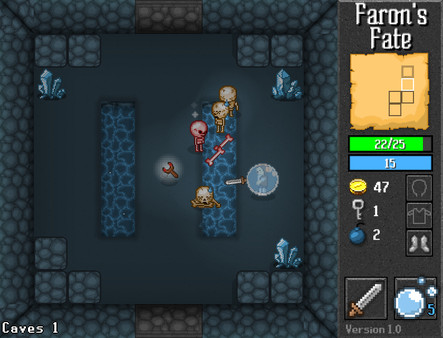 Game has very simple controls, but you might have some problems getting used on them. There is a short tutorial that explains you how to use controls properly, but in the end it’s up to you, the way you will play and use the controls. To be honest I am only using movement keys and keys for melee attack and spell attack. There are two more important controls, but I really don’t bother with them, maybe I would survive more, but as I said, Faron’s Fate is the game to rest your nerves. With SHIFT you can strafe and with CTRL you can pivot or in other words you can turn around in any direction while standing. Even though this is a pretty much simple game, it has some deep stats. There are more than 200+ Unique items, weapons, armor, and magic spells. The game uses some classic RPG elements. Each armor, weapon and equipment has their own stats, same as the items in the game. Since this is procedurally generated game, it will either reward you or not. Mostly it will, but you need to watch closely what are you picking up, especially when you are consuming something. Once I consumed some funny mushroom and I was blinded, that means no map, you are disoriented. In each dungeon you move through the tiles. You can’t move to next tile if you didn’t kill all the enemies in the previous tile. You also don’t need to worry will you need to kill same enemies again if you go back to tiles you have been already, like in some games. It’s so frustrating when game force you to kill same enemies again and again. 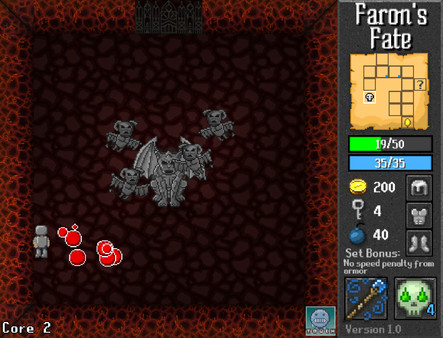 Even though this game doesn’t have a story, badass graphics or something else that only AAA games have. That doesn’t mean it can’t be a good, fun and probably most important thing of all to rest your nerves, because you can rest your nerves in Faron’s Fate. You are a lone adventurer venturing into a dungeon full of dangerous monsters and rare artifacts. As you progress more through the game and get deeper, you will find how this game can be fun, it can reward you greatly, but then again it can punish you for not paying attention. There are so many equipment to loot, to explore, items to discover and you must always watch closely. This game is single-player only, but you can still compete with your friends or random people. In main menu there is a special section called stats, in which you can see your general stats and best times for Normal Run, Time Attack and Boss Rush mode. I’ve managed to get to the 5th floor and I have also discovered and collected 93 items of 215. You can browse through all the items and see what each items doing to you or the enemies. 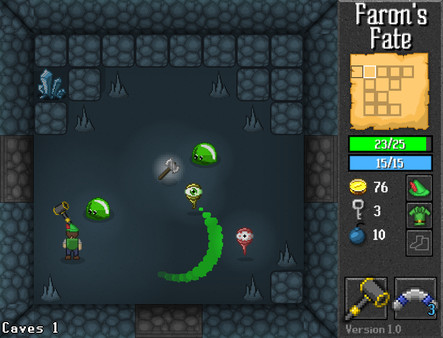 Faron’s Fate is a little gem, a great game. Such a simple game, without any real story or complicated gameplay mechanics. You just buy, download and enter the world of procedurally generated dungeons in which you will discover a lot of enemies and interesting bosses. More than 200+ weapons, equipments and items awaits you. Just remember one thing: this is not a serious game, this game should rest your nerves, because it doesn’t produce any frustration and it has all my recommendations. Go quickly and get it.