Being the leader of a country is hard. I can’t say I have any experience in the matter, but based on the job description I’d say it’s a pretty accurate assumption. Depending on the size of the country, you might have millions of people whose needs you need to meet. You have to think about the country’s infrastructure, economy and foreign policy. You have to think about your military and what its goals are; not just on your home soil, but overseas as well. You have to think about your subordinates too, as well as the other parties that they represent. Put all of those things together and you get something resembling an aneurysm rather than a job. Now try to imagine that very same job, but the country you’re governing is in the Middle East and is recovering from a successful revolution. The country is in disarray and the newly established government has to pick up the pieces and turn the place into something halfway decent. 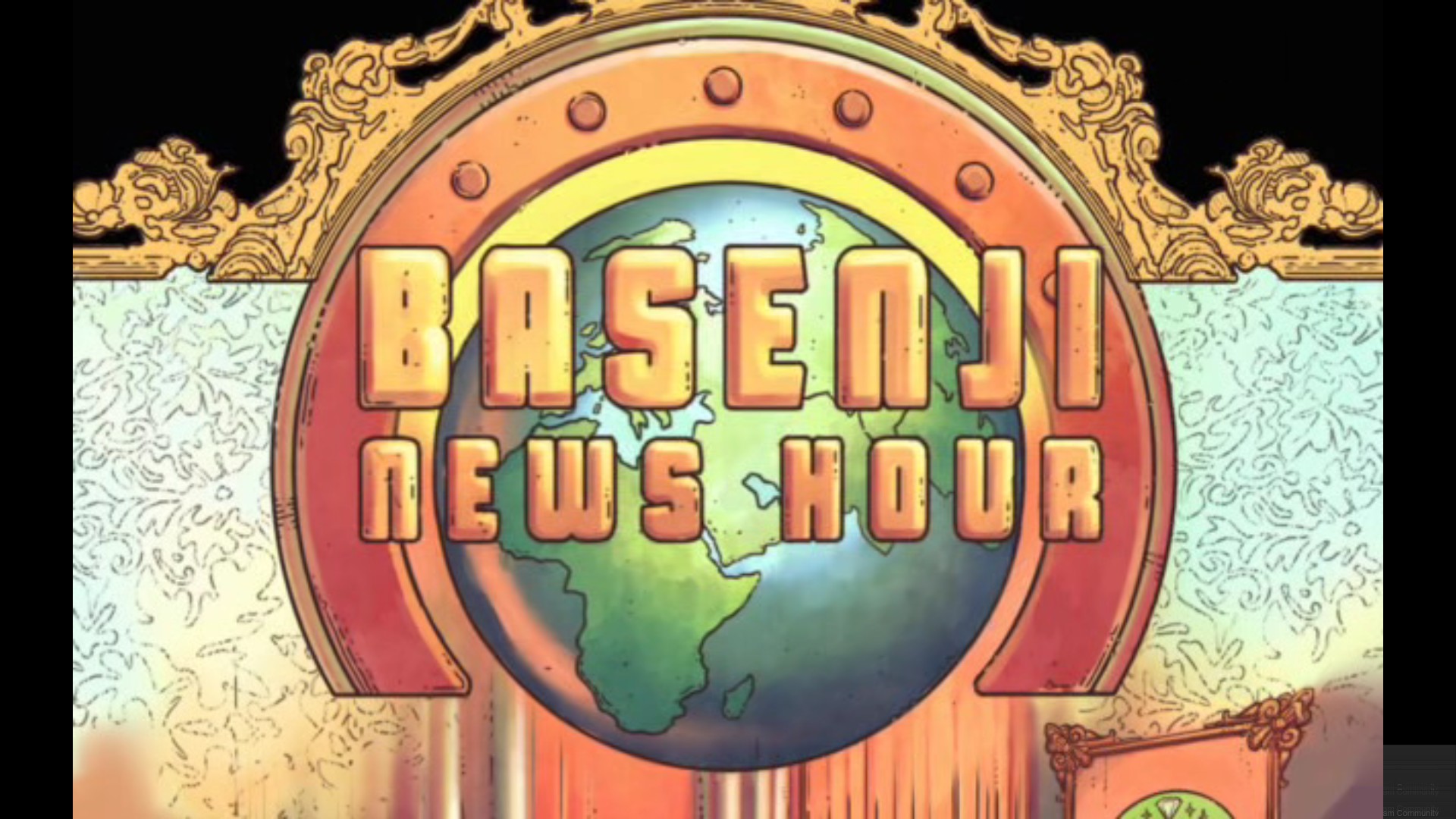 You assume the role of the Glorious Leader; the man or woman in charge of Basenji, a country who only recently deposed their tyrant of a monarch. You and your brother Farouk were the ones leading the revolution, so it’s only fit that you’re both in charge. Right off the bat you have to choose your ministers, all of which belong to one of the 4 different parties. You’ve got the Patriots, the Capitalists, the Fundamentalists and the Liberals. Then you’ve got Farouk. Despite being loved by the people for taking a more militant role in the revolution, he honestly serves no purpose other than to mess things up. From that moment on, you have to manage your policies, nearly all of which have some kind of negative or positive effect on all 4 of the parties. You have to manage your infrastructure which, after unlocking the first basic tree, is separated into security, social and economic. You have to manage taxation and foreign relations. From foreign relations you need to think carefully about trade. You also need to consider your relationship with the United States and the United Nations.

Let me put it this way: you have to do a lot of managing. And it’s hard, as expecting. The game is turn based thankfully, so you do have time to plan everything out, but you also have to account for the decisions you make between turns. Some of them are pretty hilarious, like the presidential guard apprehending a schizophrenic roaming the hallways with a knife. Then others are a little more serious, like intervening militarily in a neighbour’s war or deciding how to respond to a particularly damning UN report. I could go on and talk about clandestine operations and military procurement but honestly, I’d just be listing features. 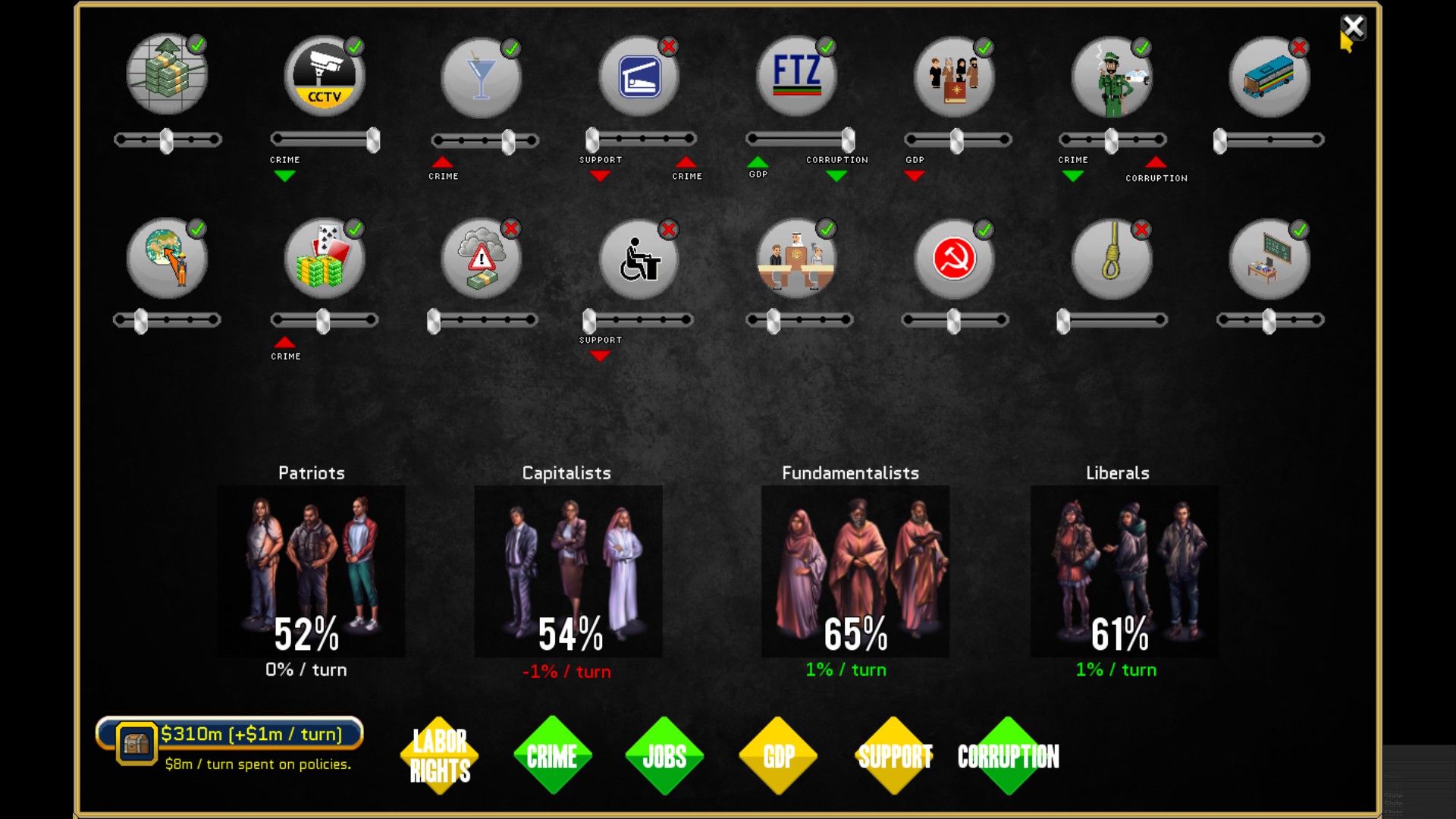 However, despite how hard the game was initially you will start to get the hang of it. It took me around 4 tries before I finally achieved victory and beat the game. What disappointed me a little was the fact that the game has a win state, which essentially means the game is over. That’s not the say that it there is no replayability; it’s just a little sad that I can’t see how much further I can plunge Basenji into chaos. The game does have a lot of management options but it’s not as in-depth as say, the Democracy games, and I think this might be one of the main reasons the game stops after you beat that double-crossing douche of a brother in his attempted coup d’état. There is a sandbox game mod, but honestly, after the last play through I can’t see how else I can possibly rule Basenji. 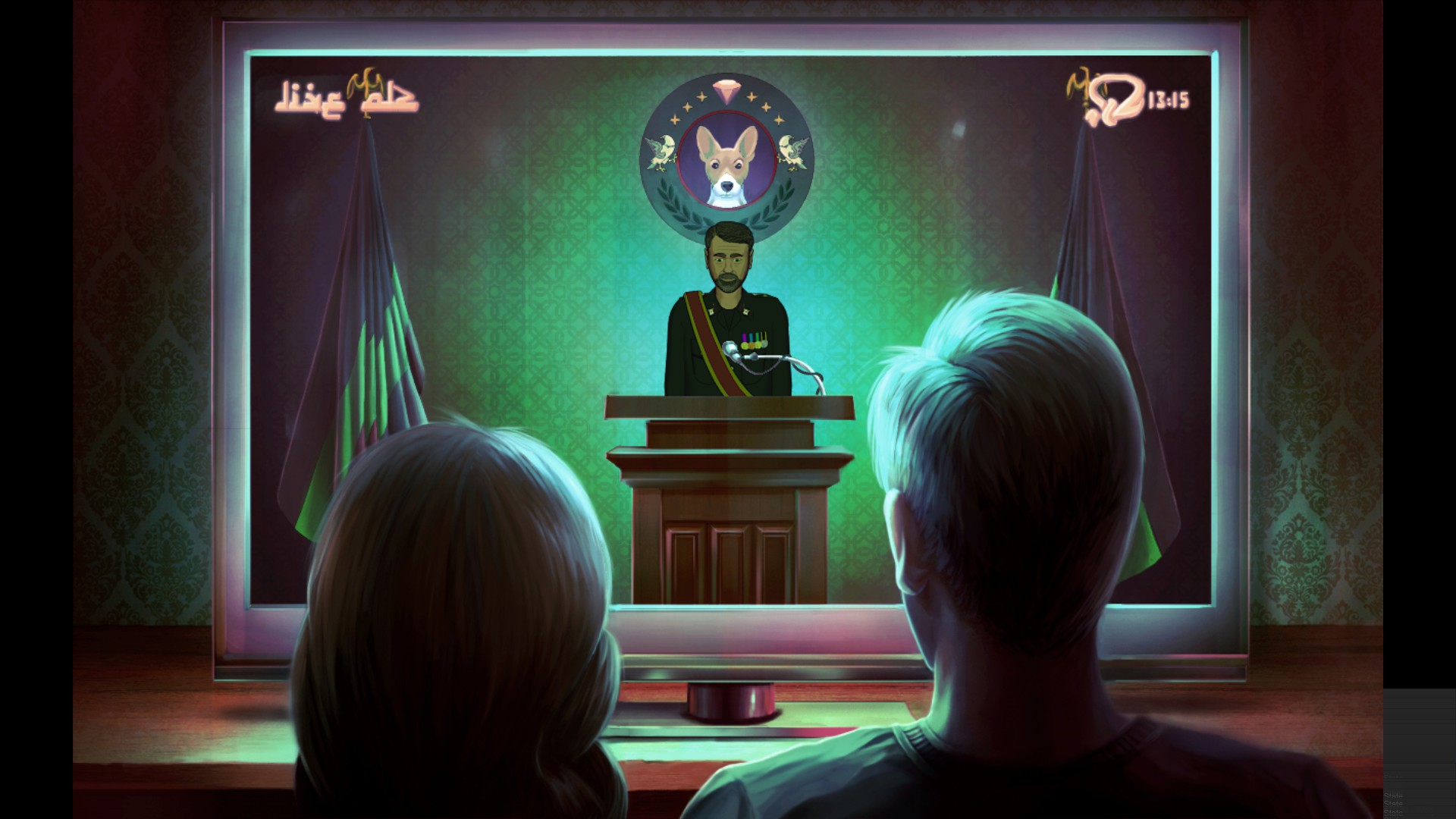 At first, I wanted to see if I could turn the country into a fundamentalist paradise that somehow managed to maintain relations with America while trading oil with all of my neighbors, but I couldn’t do that. If you get too much support from one faction you’ll inevitably lose support from the others, which results in riots and public opinion going down. You don’t get the option to have those people… disposed of either. Not being able to govern the country in a specific fashion was a little disheartening, but that one complaint is overshadowed by how much fun I had with the game.
And yes, the game is a lot of fun. It’s challenging, but not so challenging that you feel like putting your head through your monitor. It’s serious, but not so serious that you’ll end up hating yourself when something goes horribly wrong. I mean, one of the countries is ruled by a chicken, how serious can it be?

That being said, it’s clear that the game isn’t trying to be as hardcore as Democracy or as humorous as Tropico. It sits somewhere in the middle and I quite like that. It’s a game that you can pick up and play whenever you feel like it, and despite its limitations you will definitely have fun with it. 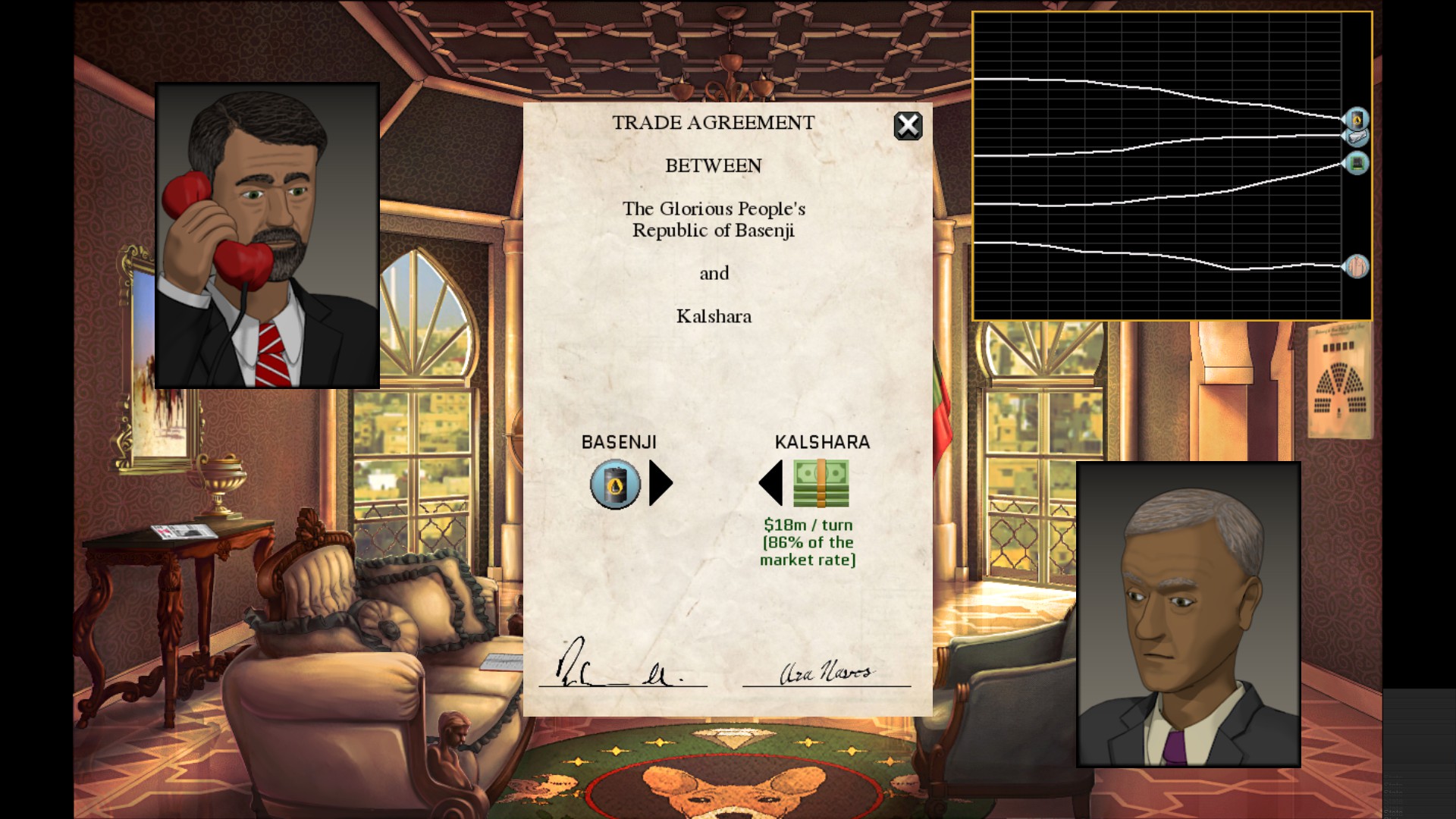 I can’t give the game any points on visual flare, because frankly the game isn’t very nice to look at. The UI is functional, but it’s a little clunky and not exactly pretty. The character models are also pretty bad-looking, but personally I think it all adds to the games charm. I will give credit where it’s due though, because some of the still artwork looks quite nice. Also, you have to consider that this isn’t the kind of game where any of that stuff really matters; it’s a government management game after all. The same goes for the game’s sound design. The voice acting is hilariously bad. But again, it really does add to the games charm. 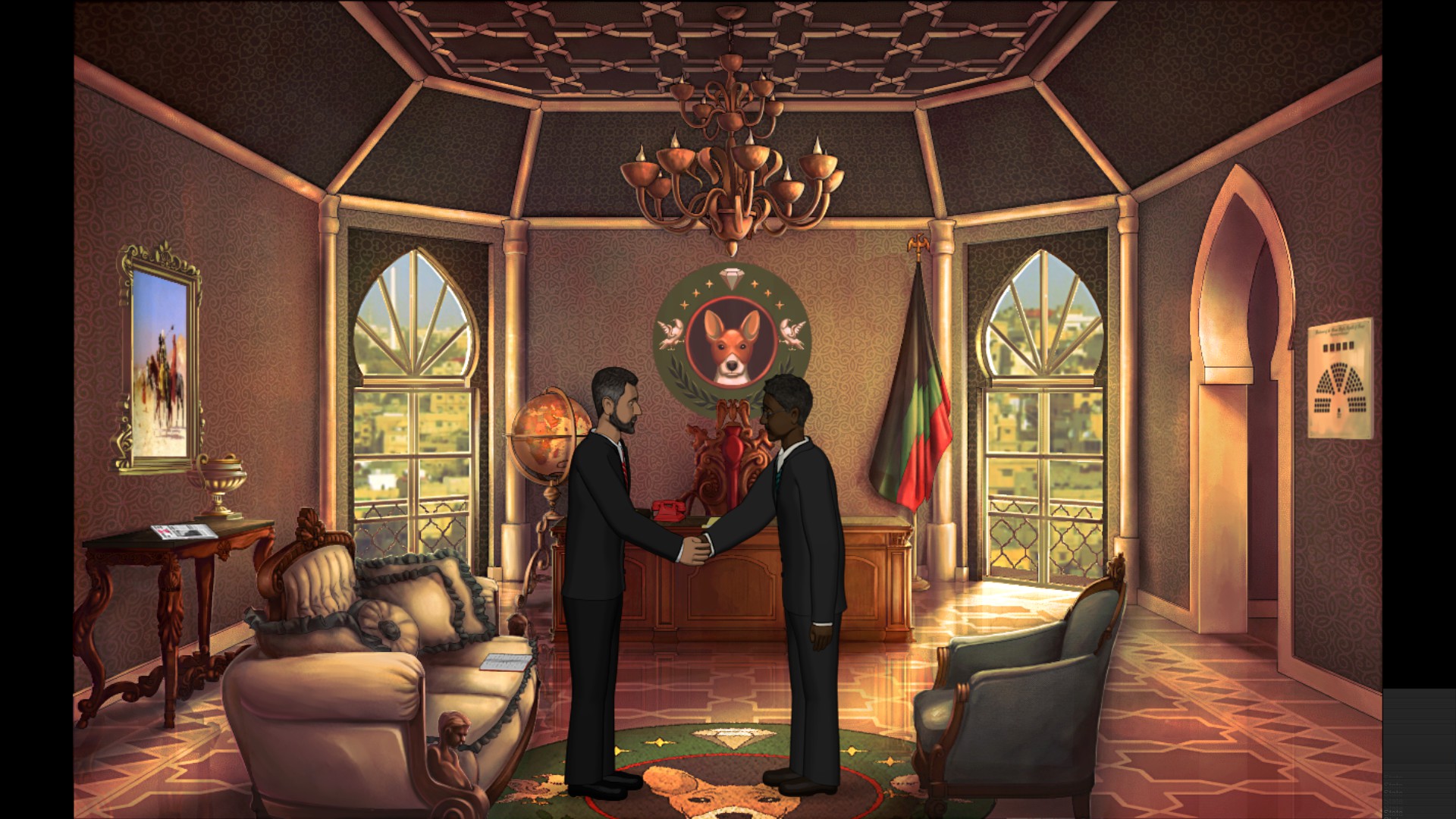 If you’re looking for a fun challenging experience without the oceans of depth you’d expect from a government management game, then this is certainly the game for you.