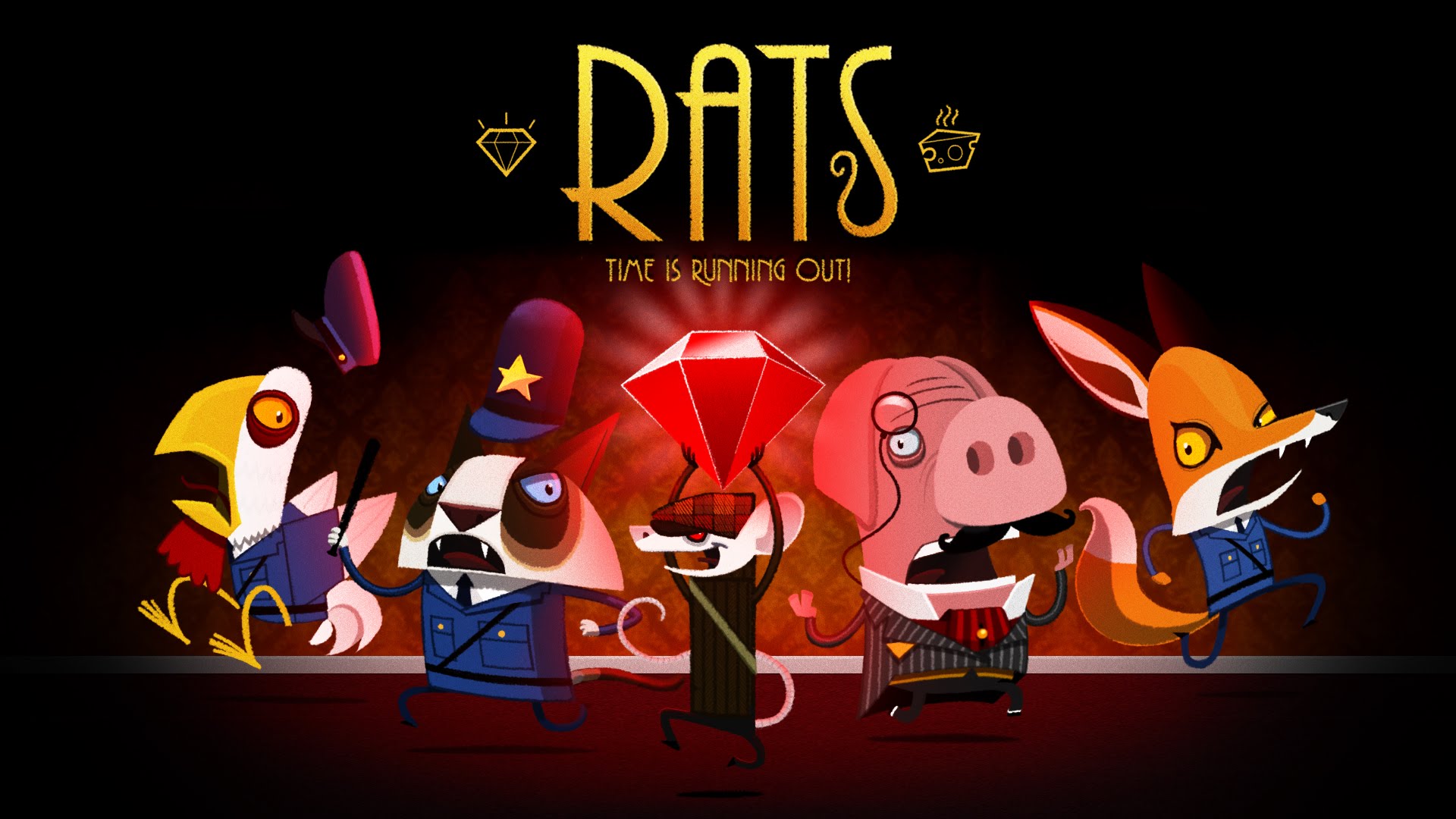 REVIEW: Rats Time is Running Out!

You can describe Rats Time is Running Out! as the eternal battle or call it what ever you want, between mices and cats or in this case, rats vs cats. Of course there are other animals, but mainly it’s about rats and cats. Catch me if you can, if you get it.

Game with certainly interesting title and very interesting idea/concept, but that’s where all good stops about this game. To be honest I didn’t expect anything big from this game when I saw videos and screenshots for the first time, but it caught my eye. Rats Time is Running Out! is a game in which you collect coins, diamonds, blueprints and many other things. Every level is labyrinth-like bank and without the map, sometimes it can be frustrating to get out of the level. There are a lot of guards on your way, but your main enemy is: time! Don’t expect to finish every level immediately. Sometimes you will need to go through the level few times, because you will need to plan how you will collect everything and escape before you ran out of the time.

Someone would say after reading the previous paragraph, that this is a pretty much standard game and you can say that, but when you unlock harder levels and when you go deeper into the game, you will see the real problems. First and main problem with this game is repetitiveness, actually it’s the feel of repetitiveness. First few levels are good, but then later it becomes very boring. The design in this game is generally speaking: boring and bad. It looks like developers didn’t had enough creativity. The idea and concept for this game is simple: you need to collect and escape on time. It’s an interesting concept if you develop it in a right way and that’s where Rats Time is Running Out! fails or to say, Citeremis as developer failed. Throughout the levels you collect blueprints and then you can unlock certain items like a booster, typewriter to hide yourself from enemies. After some time the game becomes boring and you just don’t have any motivation to continue it. One thing that demotivates you is the difficulty setting. Sometimes game says the level is easy, but that’s a lie, why? It’s easy to collect everything, but mostly you will either ran out of the time or you will not finish the level in the required time to get a star. I am one of those people who want to finish every level with 5 stars. If you collect every coin on the level you get a star, collect a diamond, you get a star. Some levels give you less stars and some more. The point is that most of the people will try to get every star for each level, no matter how hard they are or complicated. Most of levels I have finished with all stars, but there are a lot of levels that need more concentration, planning to finish them perfectly. It’s in human nature to give up after few times of trying, we people are lazy.

Later in the game as levels gets bigger, more complicated, the problems are getting more noticeable. I must say that music is very enjoyable, but sadly that’s one of the rarest good things I can tell about this game. Don’t get me wrong that this is a very bad game, it has some problems that will probably bother you and because of it, you will not enjoy the game as developer probably imagined or you will not be motivated to continue playing the game and finish it. I got very bored with the game (very quickly), even though I finished most of my levels easily and quickly, but because of the design of the game and the feel of repetitiveness, it killed my playing experience. It’s an average game, maybe if they included a story or they implemented some levels in which you don’t need to collect coins or you need to do something else.  You know just to rest a little bit from the main levels. If developers were a little bit more creative I think it this game would be better, more enjoyable and more fun to play, sadly Rats Time is Running Out! is a game that you will probably only play to take a rest from some other games or just to kill the time, even if you’ll not enjoy it. If you are going to like this game, then you will probably have  more than 5 hours of gameplay. In the main mode called, Heist, you need to collect 125 stars to enter the main bank in the game. Before going to the main bank, you will need to conquer five different parts of city. I was hoping that every part of the city is thematically different, but that’s not the case. There is one more mode called Challenges. The levels are harder, but pretty much the same as in Heist mode. Only good thing is that you can ride a rocket for a few seconds, but it’s very difficult to control it in a very small areas. I wonder what if this game had a some kind of multiplayer mode? Co-op, you and your buddy are working together to finish the level or you play with random people in a level and the winner is who collects the most coins or points. I think this game could be good in multiplayer mode. Rats Time is Running Out! is an average game. With good idea and concept, but bad end product. Lack of creativity lead to bad design and very boring game. I think Citeremis team missed a good chance to make a better game, because you don’t see every day games like Rats Time is Running Out!. I would only recommend this game to people who like this type of games and people who don’t know what to play and they just want to kill the time. With price of €3.99 it’s cheap and I don’t see any other price tag for this game. I really think that Citeremis missed a good chance to make a better game and I hope that they will learn from this game and they will make their next game much better.