The final part of the Shadowrun trilogy with different setting and story. It feels inferior to the first two games, although it’s still enjoyable all the same.

Shadowrun: Hong Kong – Extended Edition is the third installment of the Shadowrun trilogy, telling the story of a shadowrunner team in Hong Kong. It tries to combine the element between the first two titles while still trying to implement new additions on its own.

The game still has the same-looking visuals as its earlier predecessors: buildings full of neon lights, characters in a top-down view, and good-looking portraits will be what you will expect from the game. It also tries to incorporate people from different countries, which are portrayed differently by their facial features. Unlike the first two games, you won’t always see big company buildings in your missions – slums and even ships will also be one of your destinations, making you see the other side of the spectrum.

The game has a lot of dialogues at the beginning. You’ll have to deal with a lot of unnecessary facts, whether it’s news coverage, philosophy, or even history. To be honest, I got overwhelmed by all of them. I’m not someone who can stand reading heavy topics for a long time, and if you have played other Shadowrun games, you’ll notice that their dialogue tends to be wordy without leaving any detail out. While I appreciate the approach, I feel that the dialogue can be chunked into tiny bits, especially with how it becomes later on.

There isn’t much dialogue nearing the end of the game. Just like Dragonfall (our review), Hong Kong tries to let you bond with your neighbors, whether it’s teammates or shop owners. Talking to them between missions will be required to know more about their story. However, the length of their story is kinda weird. There are a lot of topics to talk about at the first two visits, to the point that you have to spend 30+ minutes after a single run. You can even get more dialogues if you talk to a character several times. On the contrary, there aren’t new dialogues near the end of the game. 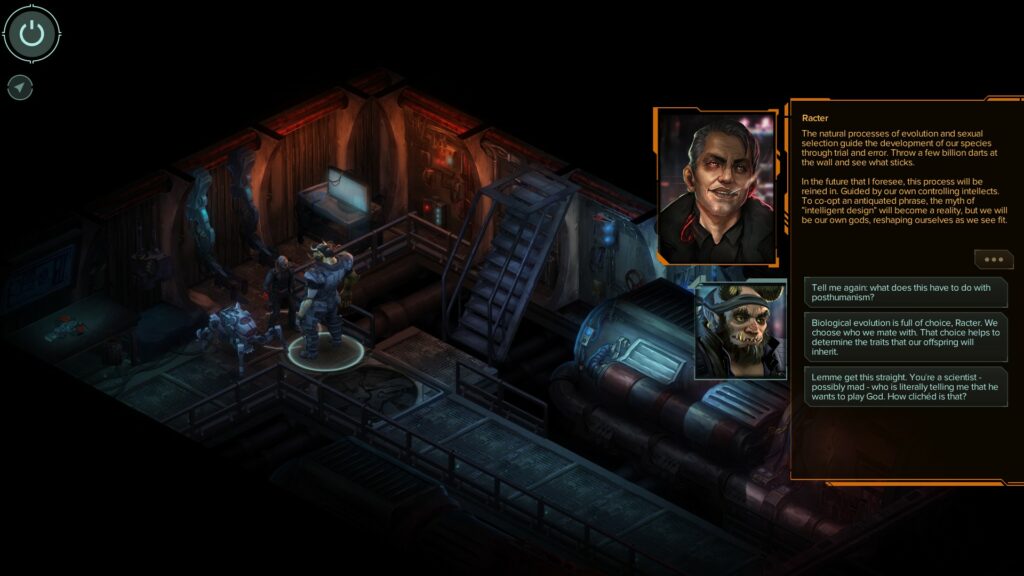 If you have played other Shadowrun games, the game is basically the same. It’s a turn-based strategy with a heavy emphasis on dialogue. You need to take on missions with 2-3 other people and finish the job that was given by your client. The game is more generous on the number of your teammates this time. Instead of having 3+1 teammates like in Dragonfall, you’ll have 3+2 teammates, giving you more variations to your team.

You are free to build your character however you want. Just like other Shadowrun games, there are different types of professions in the game. Each character has their pros and cons, and since this game is generous with skill points, you can build your character to be specialized in 2-3 types. One noticeable change from the first two games lies in how rigger, drone user, works. The accuracy for their drone seems to be improved and more drone variations are being sold to the shop. I even wanted to play as a rigger because of it. 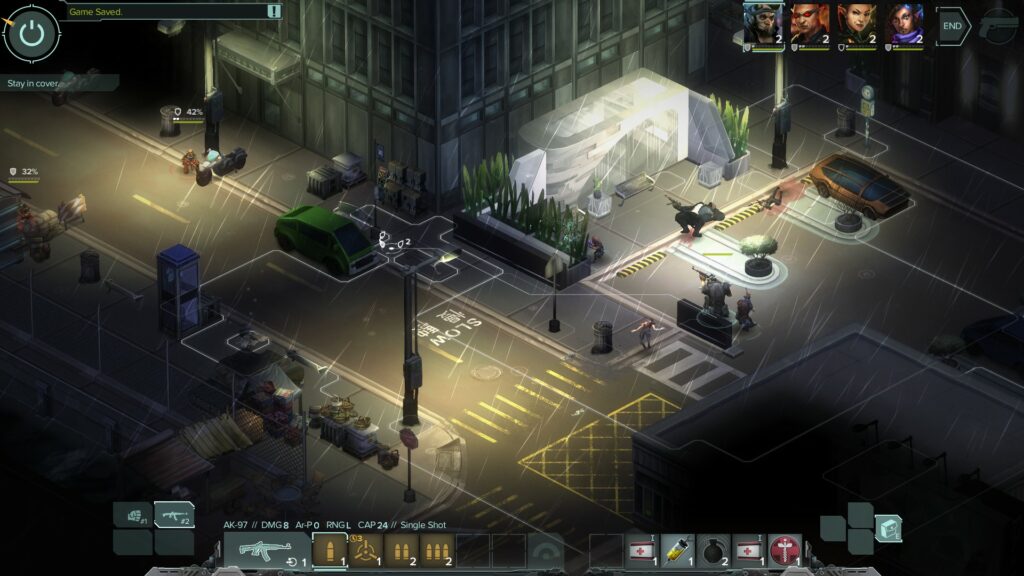 The game also gives you freedom in how to finish the missions. There are several ways to reach your objective, whether it’s to use your charisma to smooth talk everyone, upgrade your security clearance in the matrix, or even use guns to kill everyone in your way. The latter one is always the easiest, but exploring everything without getting loud will usually give more rewards from the additional exploration. This also adds replayability if you want to play the mission with a different approach.

Money is limited. Unlike the first two games, you don’t have a lot of money this time. I even had to save money to buy the best weapon because I know that I won’t be able to afford it otherwise. At the end of the day, I still managed to get everything that I need with a little money to spare, but I’m not sure if I could afford the best gear if I play with other builds, especially shaman that requires disposable tokens to play. 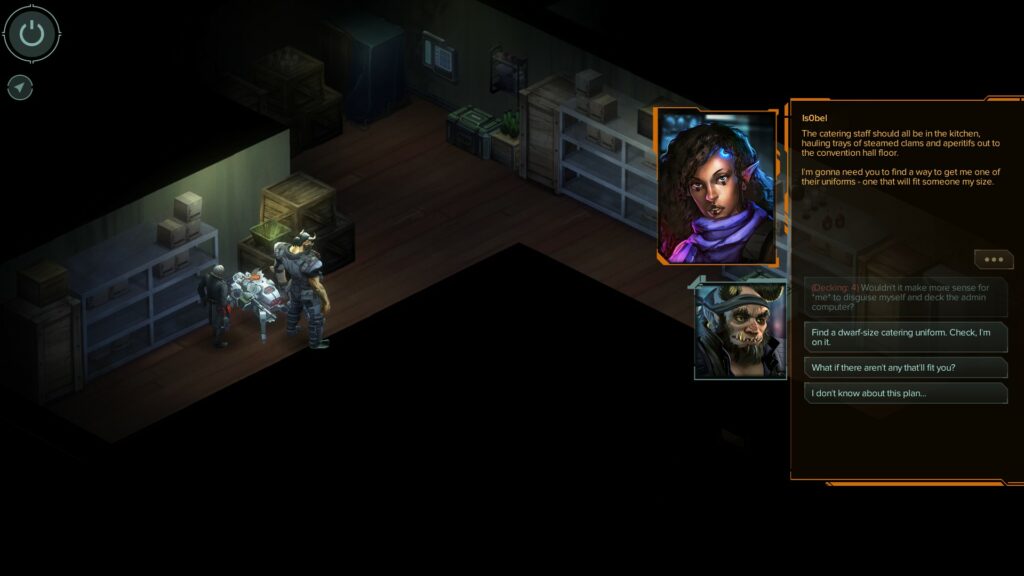 The other change that the game has lies in the matrix. If you are new to Shadowrun, the matrix is similar to the internet where you can explore and interact with a system, except that your mind will also be transported in the process. Decking, the term that is associated with going into the matrix, is divided into two types: exploration and hacking.

The exploration part requires you to be stealthy, exploring the area without being spotted by Watcher ICs. Being spotted will lead to battle which will increase your trace level, spawning Black ICs that can damage your body in real life after you reach a certain amount. To be honest, I don’t like to play a stealth game with a mouse. It’s hard to move my character with precision, making it easy to get spotted in a more difficult area. Luckily, the game gives a lot of leeways before your character is spotted by Black ICs. I only experienced it once at the beginning, and it’s not even hard to defeat them in the first place. 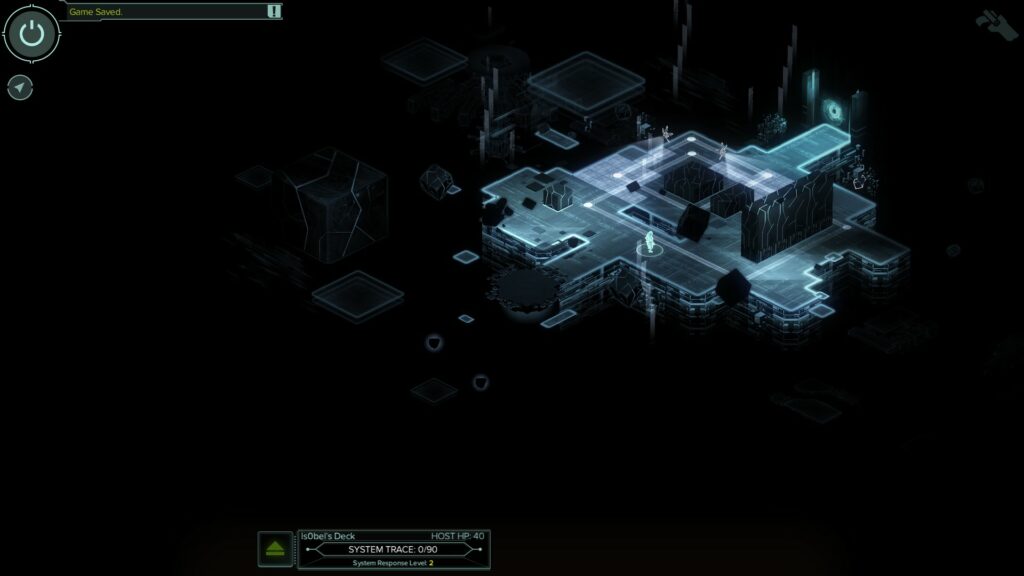 The hacking part is a simple minigame that again, is divided into two parts. The first part is a memorization section where you need to memorize a series of number that is being shown. The second part, on the other hand, is way harder. There will be a series of symbols given at the top screen and you need to find the matching pattern at the bottom. This is my favorite part since it feels like I’m doing something to hack the system.

The game is longer than the first two games. I finished the main game in 41.2h, spending an additional 1.2h to explore all 4 endings. There is also a bonus campaign that gives a little insight into one mystery and a conclusion to you and your team. I finished the bonus campaign in 9.5h, although I had to replay it to get one achievement.

As for the difficulty, the game offers 3 difficulties. I played in easy, and as someone who is bad at strategy games, I find it to be harder than the first two games. Some battles will require you to fight three-way battles while others require you to fight heavy-hitting enemies. Although I never used any items in the first two games, I had to use some revives in the difficult battles to get through.

There is no subtitle in the cutscenes. As someone who has difficulties in hearing English words, it was hard for me to understand them clearly.

Shadowrun: Hong Kong tries to blend some elements from the first two games. It has everything that you want from them, whether it’s the turn-based strategy or the dialogue branching. I always like to explore my options whenever I played the game, trying to find how others react if I answer differently. Those who aren’t familiar with the series might have difficulties understanding the in-game slang, but that can always be fixed with a bit of Googling.

Quality-wise, I found the game to be inferior to the first two games. Sure, there might be some improvements, but the implementation feels rushed. As a story-heavy game, it was hard for me to get immersed in it. Some dialogues feel unnecessary and wordy, especially on one mission that requires me to know people in a town that I would never come back to after the mission ends. It took me a while to get used to the story, and once I do, the game feels alright. At the end of the day, it still has the same essence as the other Shadowrun games, so if you like their games, it doesn’t hurt to buy this game.