REVIEW: Epic Quest of the 4 Crystals

Epic Quest of the 4 Crystals might have an interesting battle concept, but it’s all ruined due to the RNG factor.

Epic Quest of the 4 Crystals is an RPG Maker game that is focused on dungeon delving. It features 12+1 dungeons with unique enemies that you have to explore with 3-4 party members.

The game looks unique compared to other RPG Maker games. Characters look like 3D models due to their heavy use of shadows despite being 2D. It also offers a lot of dungeons with different themes, making each dungeon to be unique on its own.

The story feels all over the place. Dialogues are not plenty, although the game tries to fit as many facts as possible without making you feel overwhelmed. However, the story can be too fast sometimes. People reveal their plot casually to their enemies, enemies changing their mind just with one or two sentences – everything makes the story feels weird and unpolished. I admit that I liked one of the plot twists that the game has, but that’s pretty much everything that I liked about the story.

The dialogues aren’t enjoyable to read either. The game will try to put sex jokes and derogatory statements from time to time, making it unpleasant to read. There is an option to disable these dialogues on the setting, but since I played with the options enabled, I couldn’t tell how effective it is. Besides, I think that these kinds of dialogues are unnecessary at all. Some dialogues even feel out of place because of it.

The game has dungeon delving as its focus. There are 12+1 stages that you can select, each with different themes and enemies to fight. Most are locked at the beginning and will be unlocked after you cleared the previous stages. The good thing is that you can always come back to the earlier stages to either farm money or EXP, or both. 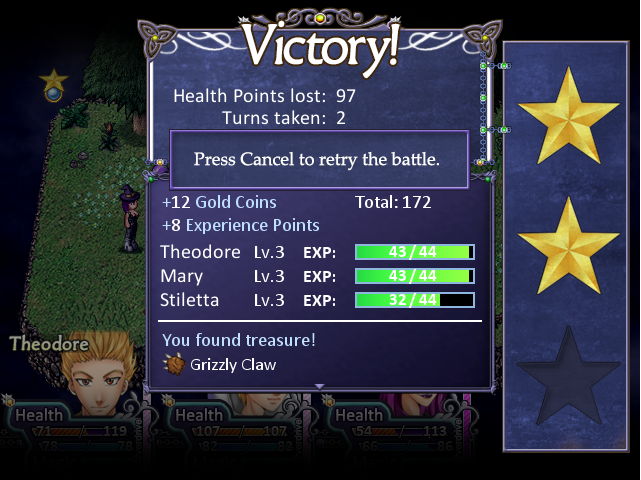 The retry button makes the fight easier. As a game that focuses on your performance in battle, having a retry button is helpful. You need to find an enemy’s weakness by trying out all of the elemental damage to it, or even figure out which skill that you need to use to defeat them in fewer turns without using too many resources. While this all looks interesting, it doesn’t come with its disadvantages either.

First, combat is heavily affected by RNG. This becomes more apparent if you are aiming for three stars in all battles since you need to make sure that all of your hits are connected. Enemies can also hit very hard, making you want to avoid damage. CC skills such as blind or silence become a very helpful arsenal in this game, except that it has low accuracy, especially in later stages. These skills miss 4 out of 5 times every time in battle, and I couldn’t just stop using them since enemies will damage my party too much than what the game allows for three stars. I don’t understand why the game doesn’t have a fixed hit chance – that would make battles to be more focused on strategy rather than pure luck. 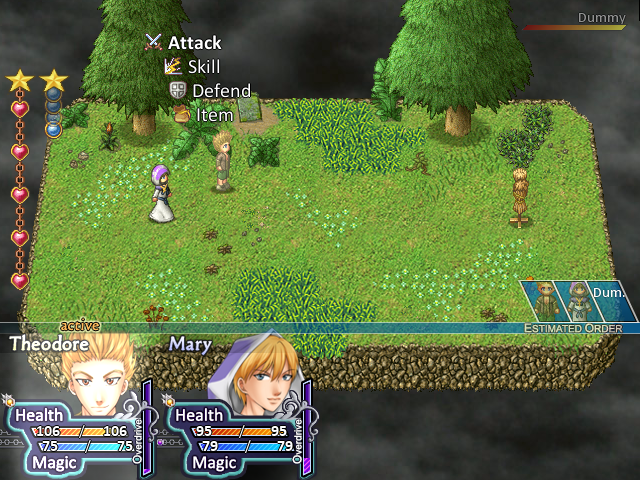 Another thing that proves the game to be RNG-based lies in its limit breaker system. The limit breaker works as a chance for a double hit after you cast a certain skill, providing you with a bar where you must press at a certain timing to deal the extra damage. Although I liked how it works, it all comes to RNG again. Yes, the limit breaker doesn’t always appear after you cast a skill, and I found that a higher damaging skill to have a lower chance of triggering it. This makes it hard to finish the fight effectively since you will be either outdps-ing the enemy due to triggering it or not having enough damage to kill the enemy because it is not triggered.

Lastly, your resource is limited. There are hardly any free heals that you can take throughout the level, forcing you to either use items or pay a certain amount of money to fully heal your party outside the battle, similar to how inn works in RPG Maker games. As someone who hates using items, I still managed to finish the game without it except at the final boss fight, but not without a lot of retries and patience. Moreover, the NPC that can fully heal your party is also gone at the last two stages, forcing you to ration your HP and MP to beat the enemies. The thing is, trying to get three stars in all battles will force you to use more MP than necessary, and the RNG-based combat for the limit breaker isn’t helping either.

All unpleasantness aside, combat is good. Enemies are unique to each dungeon, and they all have different weaknesses. Although you just need to know which elemental skill to use, you still need to try out the combinations whenever you meet an enemy for the first time. The retry button helps a lot for this.

Bosses are challenging. Despite dealing lower damage than you can heal, they will do an AoE attack sometimes. You don’t have AoE heal until later in the game, and that skill heals a very low amount of HP later on. It’s all a battle whether you can defeat the boss before you are going down or lucky enough to still manage your party without trouble. 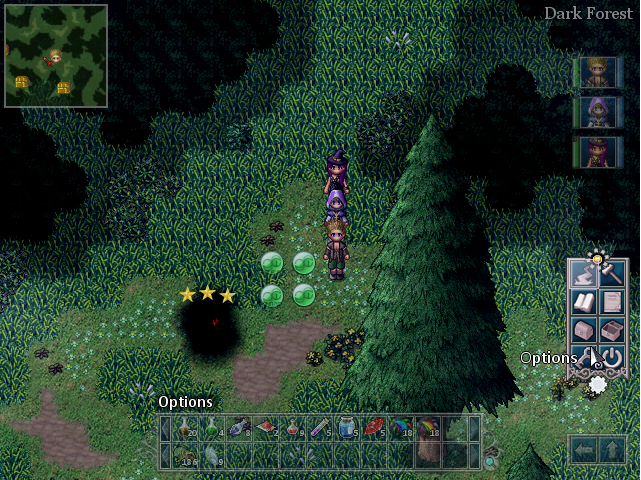 I finished the game in 15.3h. The game offers 4 difficulties, ranging from “cheat”, which I assumed as very easy, to “heroic”, which I assumed as very hard. I played the game in the “normal” difficulty early on and switched to “easy” at around stage 6 since I couldn’t beat the boss in that dungeon. To be honest, I was already frustrated from playing the game at that point because of the misses, and toning down the difficulty helped to some extent. The game might be easier if you are willing to use potions, but since they can be costly, I’m not sure if you need to grind to get enough of them until the final boss.

Epic Quest of the 4 Crystals might have an interesting battle concept, but it’s all ruined due to the RNG factor. It’s not fun to retry a fight over and over again just because you missed a skill, which is needed to land to prevent the enemy from dealing too much damage to your party. The limit breaker is also too unreliable because of the same reason, making it hard to formulate a strategy that works in every combat. While I liked playing a game that is heavily focused on combat, I don’t like being forced to use items or even doing it while being mindful of both my HP and MP. Unless if you want to experience the same frustration as me, I wouldn’t recommend playing this game.