Inertial Drift is an Indie arcade racer developed by Level 91 Entertainment and published by PQube Limited. The game is set in a cyberpunk styled world. You race against holograms, and then against the real drivers. The game also aims to change the entire concept of drifting using their unique “twin-stick” controls.

As mentioned above, the game features a unique way of drifting. Using a regular Xbox Controller I was able to experience all of the downs, and lows of this unique control pattern. The left analogue stick controls your front wheels, you can simply use it to steer just like in every racing game out there, although there is something you should know. Normal steering is basically a waste of time in this game, as you’re meant to drift around corners, so surprisingly enough drifting around a corner makes a lot more sense than the usual way someone would approach cornering. That brings me to the right analogue stick. It serves the purpose of rear wheel-steering. This is actually the more important button to use as steering which might require a little getting used to. After playing around for 7 hours I can confirm that the drifting mechanics are a blast to play around with. As a guy that has wasted thousands of hours on a variety of arcade, sim-cades, and racing sims I was genuinely surprised how refreshing the experience was. Learning a new way to control the vehicle is simply amazing.

Another area where this game gave me a new experience is how much different each car behaves. Rarely have I seen a game that differentiates each car with so much detail regarding their driving mechanics. Every car has different stats, meaning some cars have better acceleration, while others have better top speed. But that isn’t what I meant with a different feeling, all of the cars have different drift mechanics, some feel a lot more agile, easier to engage a drift, easier to balance the car and so on. Along with the different cars you get multiple tracks that can match nicely along with some specific cars strengths. 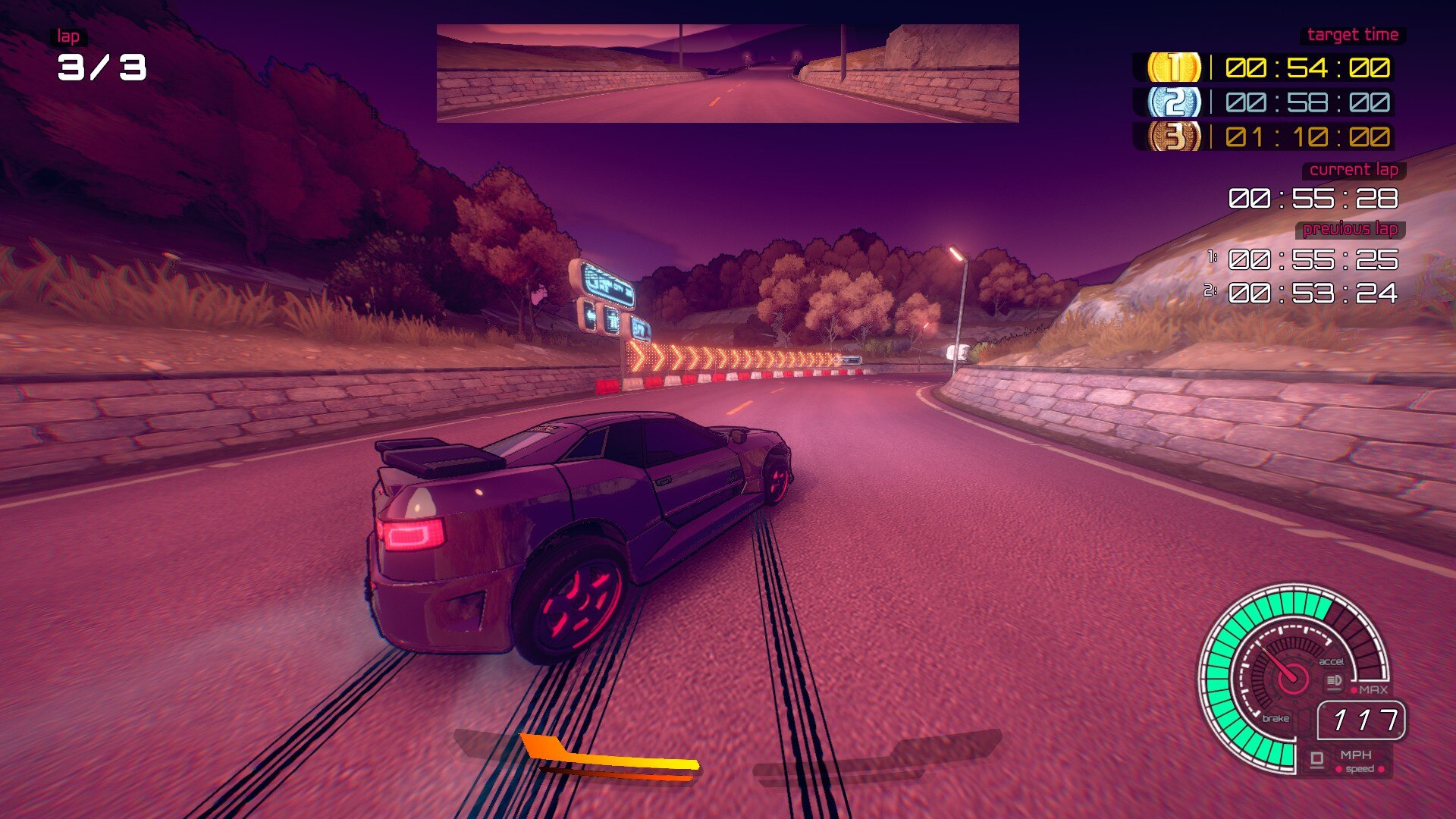 The title offers multiplayer races, challenges, quick races, and even split-screen! The game offers a lot of content and many different modes where you can test yourself against other players or the AI as well. Lobbies aren’t that active anymore, I tried many times to find an online match but had no success. Luckily I was in the position to play some split-screen races with some friends and let me tell you it really gave me a throwback vibe! Not many games offer split-screen nowadays!

One minor issue I had is the fact that after completing the game for a specific character you will then have the inconvenience that the game feels a lot easier with other characters later on. Played the game three more times with the other characters on “Xtra Crispy” difficulty and it felt way too easy compared to the first playthrough. Another minor gameplay issue is that the game doesn’t offer a countdown after pausing the game. There were multiple occasions where I returned after pausing the game and I simply got catapulted onto a wall because I had no time to prepare myself. Other than these small issues I was very impressed with the game, it was truly a unique experience allowing me to “break out” of that usual racing stuff where every game just feels the same to some extent.

There will be no spoilers so do not worry. The story is the usual street racer story we have seen many many times, although it is a lot more family-friendly. You simply see some drivers try to improve their skills on the streets using holograms as training. The opponents are basically ghosts as well, as you cannot hit them. Each character offers a unique two or maybe three-hour story. Yes, I said unique, I was actually quite surprised that each character had a different goal and agenda in their story, different dialogues, and even different friendships and relations with each other. If you so try to complete the story with all of the four characters, you will need around six to seven hours, simply because the game gets a little easier with time!

The game makes use of the Unity game engine!

Graphics:
Inertial Drift has a unique art style. Best way to describe it is that it looks a lot like a comic book. Characters have very vibrant clothing. In-game we got the same style. Cars look flashy, they also have vibrant colours, and their design reminds me a lot of some retro 80s and 90s JDM vehicles. The background and tracks have that retro-wave colour palette as well. Animations are arcadey and nothing to be amazed by, some reflection on water puddles were the most exciting thing as far as graphics go. Don’t get me wrong, this is an attractive game, but this game certainly isn’t going to amaze you visually. 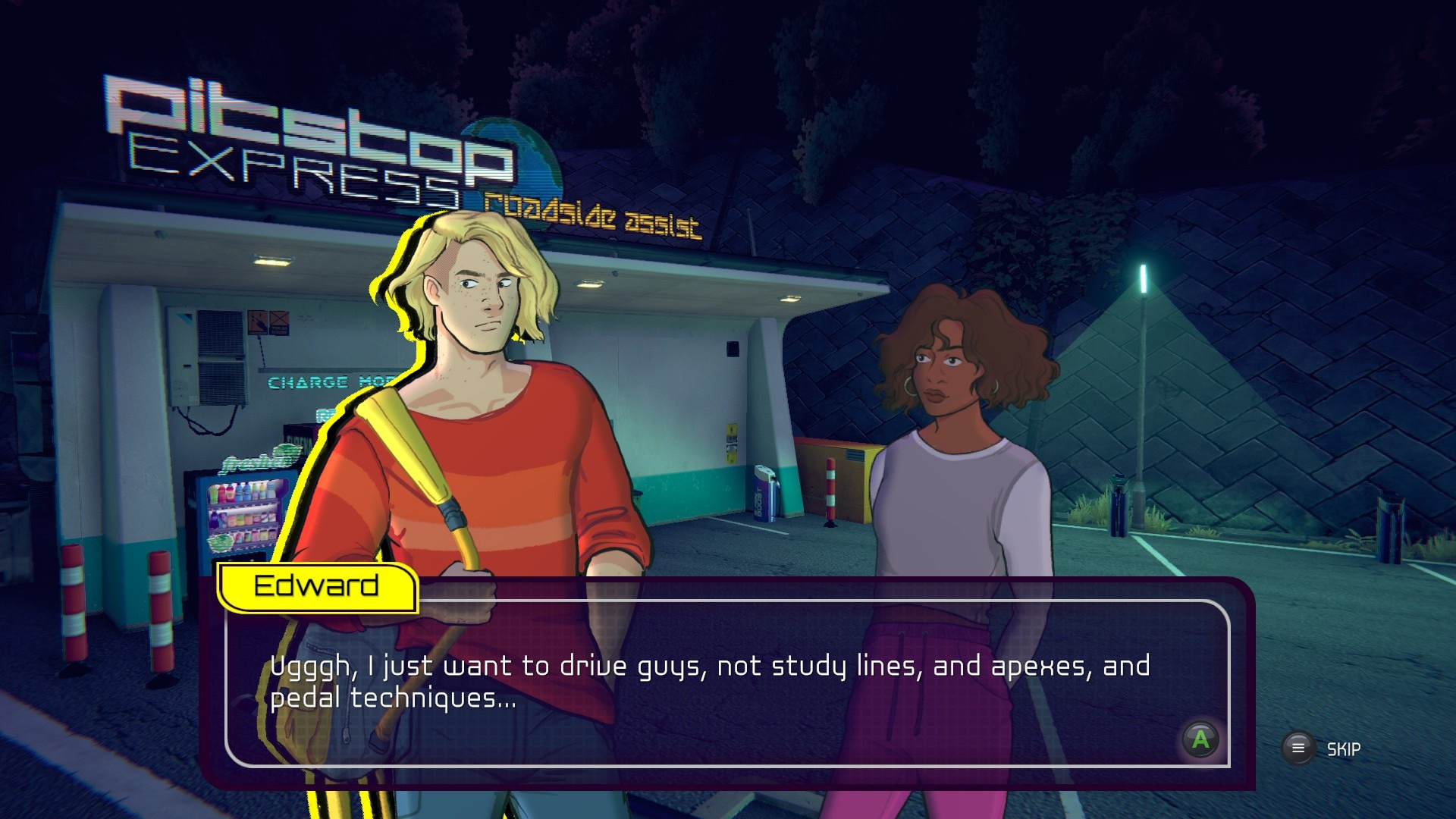 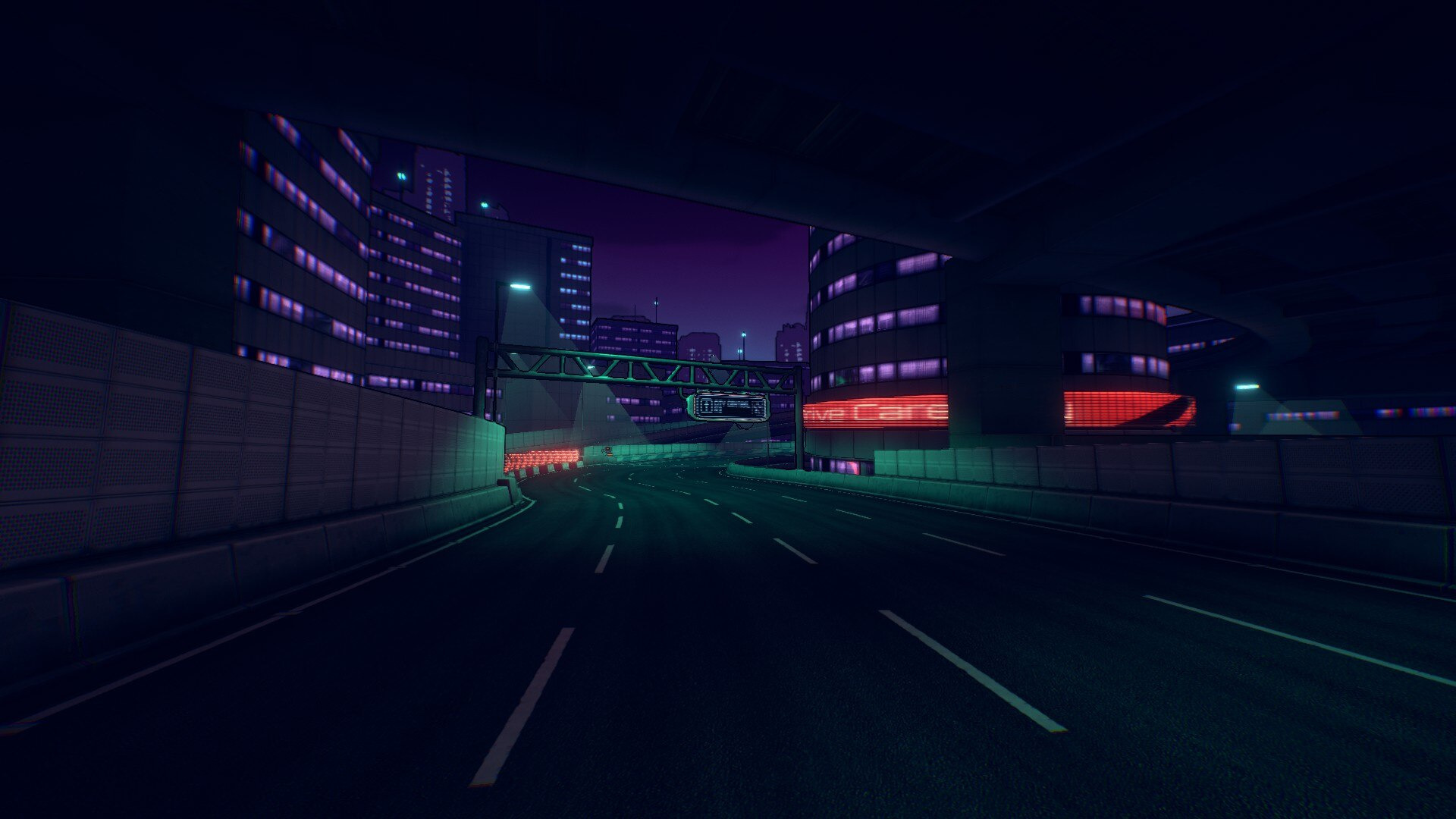 Audio / Soundtrack:
There aren’t many audio samples other than the vacuum sounding engine notes, and the tire squealing. The characters do not have voice actors either. That leaves us to the soundtrack, and it is simply amazing! The soundtrack forces you, in a good way of course, to just ace that next drift down the track! You can buy the soundtrack as DLC.

Issues & additional stuff:
In around 7 hours of crashing into walls, I experienced no crashes, no bugs, and no glitches at all! The game worked perfectly fine with any type of device I was throwing at it, consistent framerate is always a must in games where you need to maintain some sort of rhythm.

The Main Menu was pretty organized and easy to navigate through, the same goes with the UI. Everything looked clean, lap times and current speed weren’t tiresome to the eye to look at, which is often an issue with some racing games.

Lastly, I had no issues using a 1st generation Xbox Controller at all. You can use the keyboard, although I would be against that as it feels pretty bad to drive using a keyboard in this game. 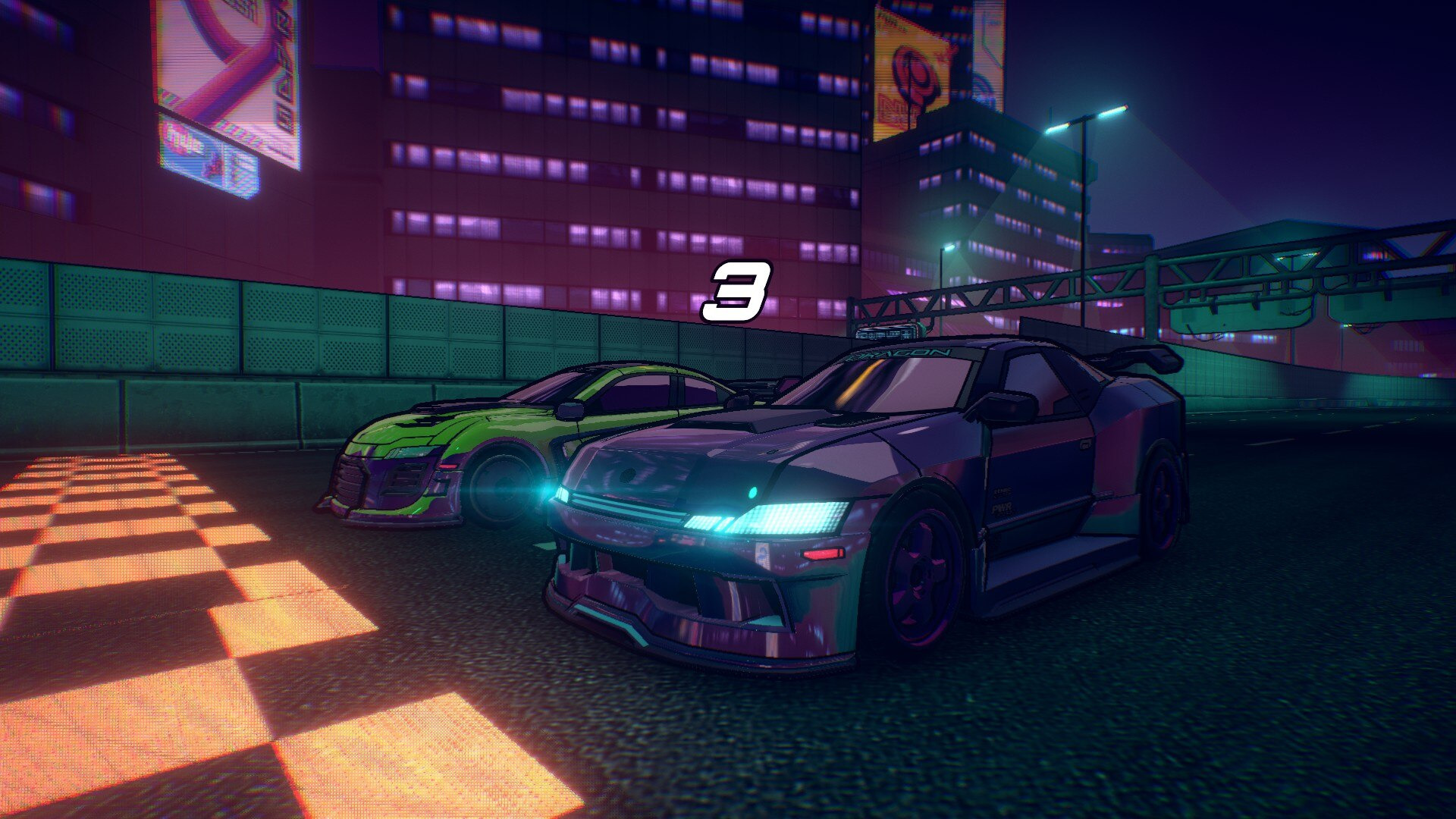 Inertial Drift is an excellent indie arcade racer! It is one of the most refreshing experiences I’ve had in a long time. The gameplay is simply an ace, the story isn’t really that impressive, but it can easily keep you entertained for quite some hours. Other than the story, it offers many more modes where you can test yourself and your friends! The game simply offers everything that anybody would like to see in an arcade racer and I cannot recommend this game enough!