Peaky Blinders: Mastermind has a unique concept with you being able to rewind and fast forward time to execute perfect coordination.

Peaky Blinders: Mastermind is a puzzle adventure game featuring a group of the Peaky Blinders gang. You’ll be able to control a character from the said gang, switch between the available characters, and rewind and forward time to coordinate their movements to accomplish a certain task with perfect coordination. Since the game is based on a TV show that I haven’t watch before, this review will be based on that.

The game has superb-looking visuals. Both cutscenes and character portraits look realistic while simplistic at the same time. It looks as if it’s an actual person with some sort of filter to make them look 2D. However, I had trouble distinguishing between two characters, Tommy and John, due to their similarities in the cutscenes.

As someone who never watched the TV show, I got confused with the story at first. I didn’t know what Peaky Blinders is or what the characters are doing at all. I only get the gist of what they did after I spent some hours in the game, and somehow, that’s also the time when the plot comes around. I enjoyed the bickering between the characters, and their talking style reminds me of the ones in western movies. All characters look tough from their way of talking, and they held themselves in such high regard that makes them look cool, even the kid. It was fun to see them going in action, and I even admit that some scenes are funny because of it. 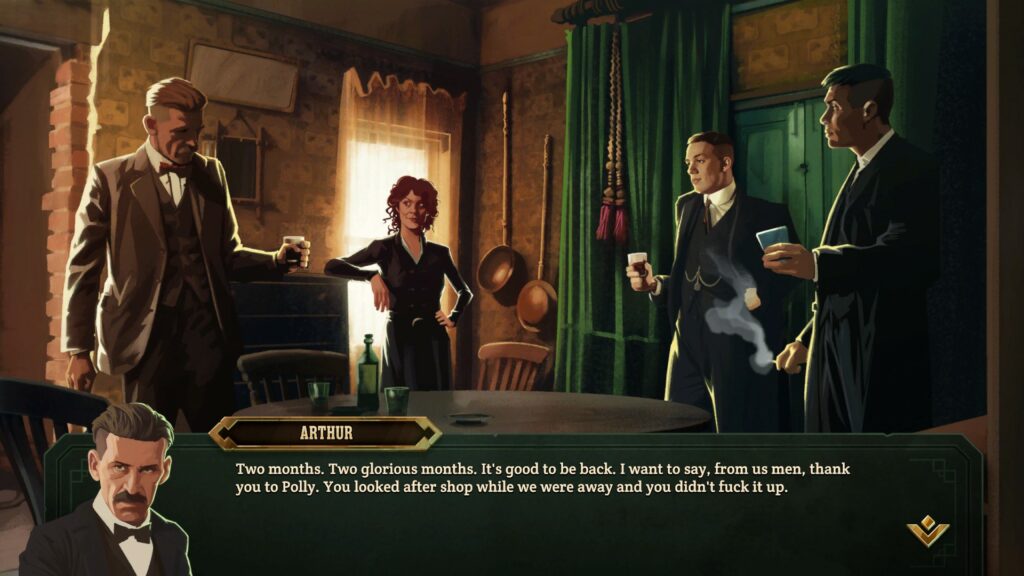 Peaky Blinders: Mastermind‘s gameplay focuses on coordinating action between more than one character. You’ll be able to control all characters one by one, with an ability to rewind and fast forward time to control the other character at the same timeframe. This can prove to be challenging since you need to figure out where the character is supposed to go and execute their actions perfectly. The rewind feature also means that you can always redo your action until you are satisfied since your time will be limited.

More characters will be playable later on, each with different perks. You need to utilize each character’s skill to reach your objective, and this also includes having them cooperate with each other. You might have to coordinate two characters to pull on a lever at the same time to get a third person to pass through an obstacle or distract a guard so the other characters can pass the area. This will require some perfect coordination sometimes, and that’s what sets the game apart from the others. 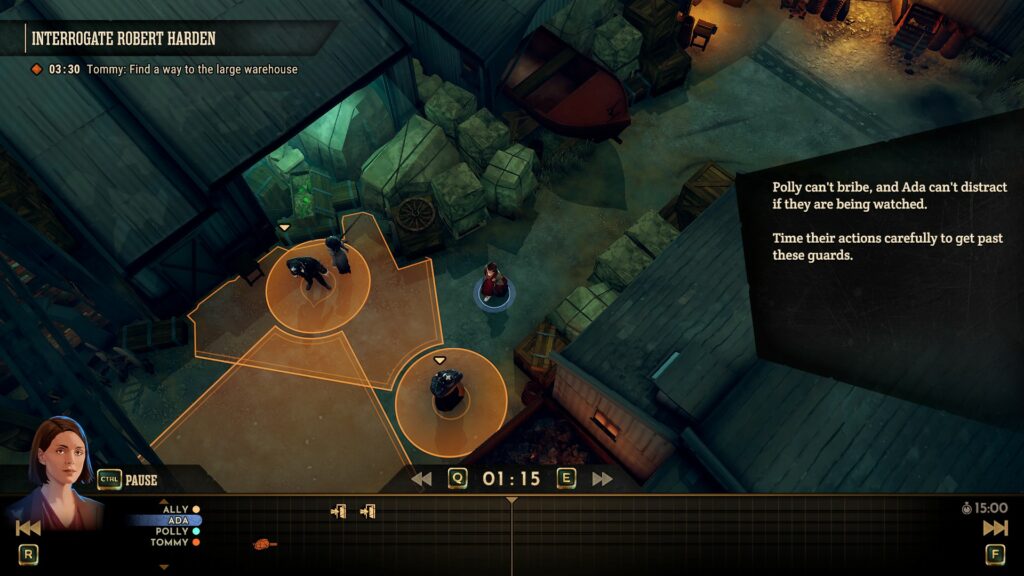 Sadly, the game is quite short. I finished all 10 levels in 7.4h, and that’s after obtaining all achievements. The game has 2 difficulties, with the easier, default one having a marker on where you are supposed to move your character, which really helps in one of the levels to prevent you from getting overwhelmed. The game can be taxing and hard to learn at the beginning, but you’ll enjoy it once you get it covered. However, there isn’t any replayability value unless if you want to collect all collectibles or finish a run without getting caught by the guards. Some characters couldn’t be seen by any guards, so you need to have other characters distract them before getting past.

The game can be problematic if you are not using your mouse. Pressing the R button to rewind the game to the previous event might delete the future actions of that character, and rewinding the time with the Q button, which will rewind the game for a few seconds, is way too slow. Lastly, you won’t be able to fast forward the time if a character that you are controlling hasn’t been controlled up to that period. Some levels require some characters to wait in a certain spot for a few seconds, so it can be annoying to wait sometimes.

I enjoyed playing Peaky Blinders: Mastermind. The game confused me at first with their story and controls, but it won’t take long before you get used to both. It is fun to control all characters one at a time and it feels great to see that you can pull the action off with perfect coordination. As someone who hasn’t watched the TV series, it got me interested in the series because of this game; the story concept looks promising and the dialogues are amusing to read.

Despite the short playtime, I feel satisfied playing it, mainly because the last 2 levels which are harder than the others. However, if you are concerned with the price to playtime ratio, you can buy it on a sale. Note that the game quality is decent enough to pay more from the discounted price.