…or something like that is what you could call El Shaddai because there’s a mix of an Action Game with quite a bit of platforming. The real USP is its surreal visuals ranging from abstract-ish art, 2D Sprite Mario colorful to a simple dark sci-fi cityscape. It features a similar simple but weirdly presented story.
It’s a unique game of its time and still is but how does it hold up?

Story: Enoch and the Fallen Angels 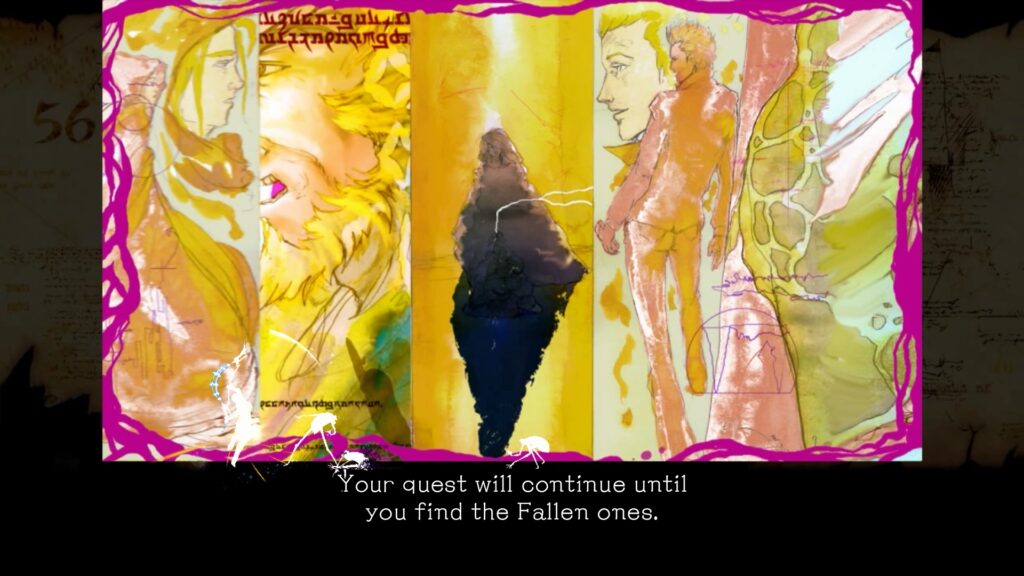 It’s a simple biblical story about Enoch being tasked by God to chase Angels that have left heaven to interact and influence humanity. They offer their way of human evolution that involuntarily affects humanity’s greatest strength: The power of choice.
For 300 years he has searched for them and he finally found them within a pocket dimension that contains a bizarre tower of their creation. It’s now up to Enoch to climb the tower, seal the Fallen Angels, prevent the further corruption of humanity, and therefore finally prevent another flood. 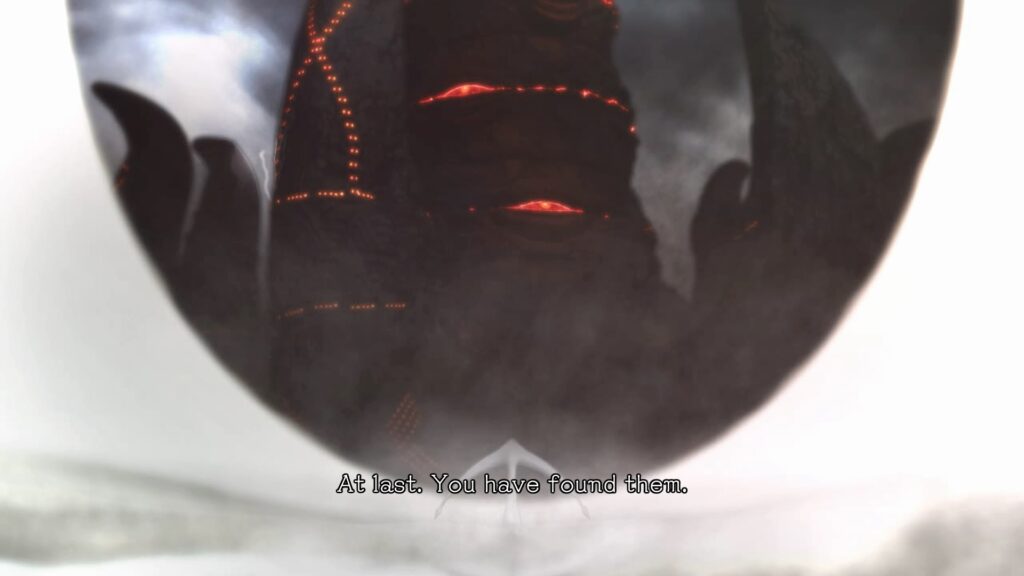 There isn’t that much actual story since this is about Enoch climbing the tower and fighting everything that comes along his way. You’ll see the typical conflict between both sides and get to hear a little bit about humans fighting against the angels. You can pick up some additional bits and pieces from hidden messengers and some background stories about the mysterious Ishtar.
As someone who doesn’t know that much about the Bible or the Book of Enoch, I could only use whatever information the game is giving me. Maybe there’s something big in there but no dice on my part at least.
Overall, it’s not a bad story and there are some twists but nothing struck me as memorable, which is probably another reason why I forgot everything from my PS3 playthrough years ago.

These two are pretty much the game, which is why we are taking a closer look at them. Both are similar to the story in its execution: Simplicity.
Don’t expect a Mario or DMC masterpiece. This game is like a middle ground that isn’t exceptional in either part but isn’t particularly bad either. 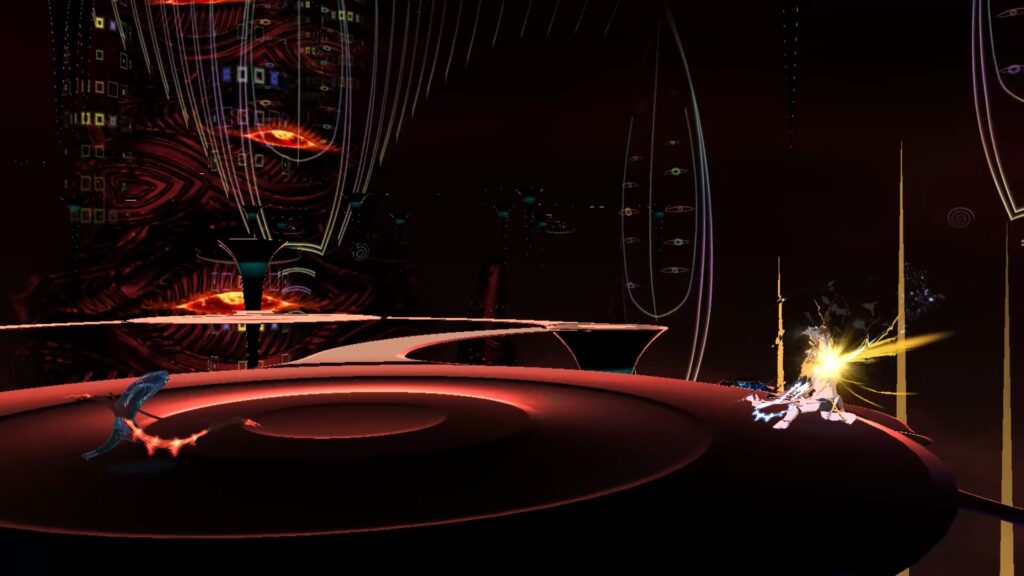 This part has quite a few strange decisions that prevent it from being good. There are three weapons in the game and you can only hold one. A quick blade, a long-range shooter, and a slow but powerful and shield-based.
You can get them in two ways, either stun the enemy and steal the weapon or break special items and grab it.

Actions
What is Enoch capable of? You can double jump, guard, and multiple attacks and purify. There’s no universal dodging and is rather based on the equipped weapon.
There is a Just Guard mechanic that deflects and stuns the enemy but it’s not easy to pull off. 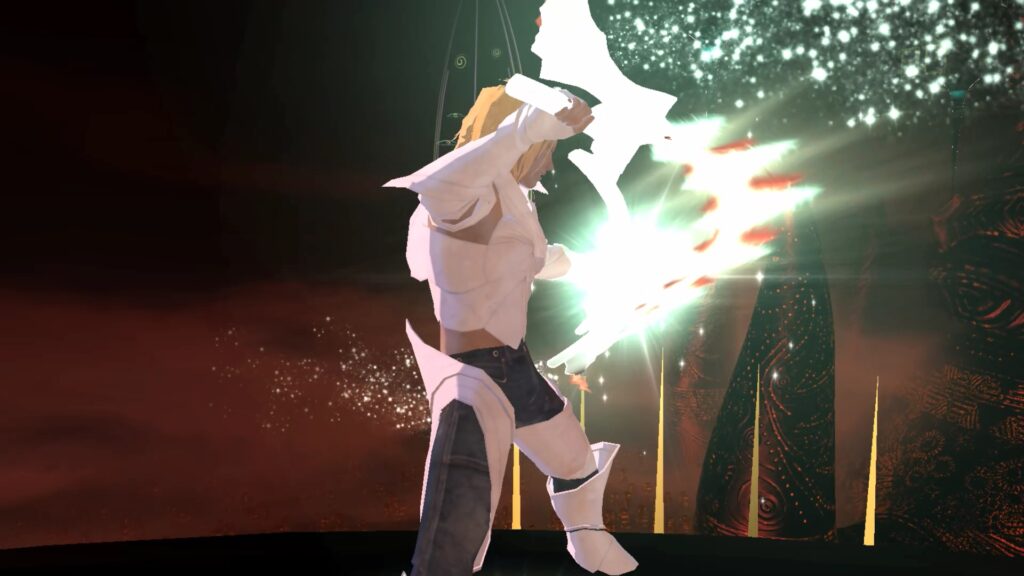 Every weapon you use will slowly lose its purity with each contact. Forget to purify them and they turn red and get major damage debuffs. Doing it while fighting can prove to be dangerous because you’ll be forced to stay still for some time.
This is where the Steal mechanic comes in. Dish out enough damage and the enemy will get into Stun state, which you can recognize by the blue circle around it. Get into that circle and purify to steal their weapon and purify it at the same time while being invincible throughout the whole animation.
Enemies without weapons are much more susceptible to damage. 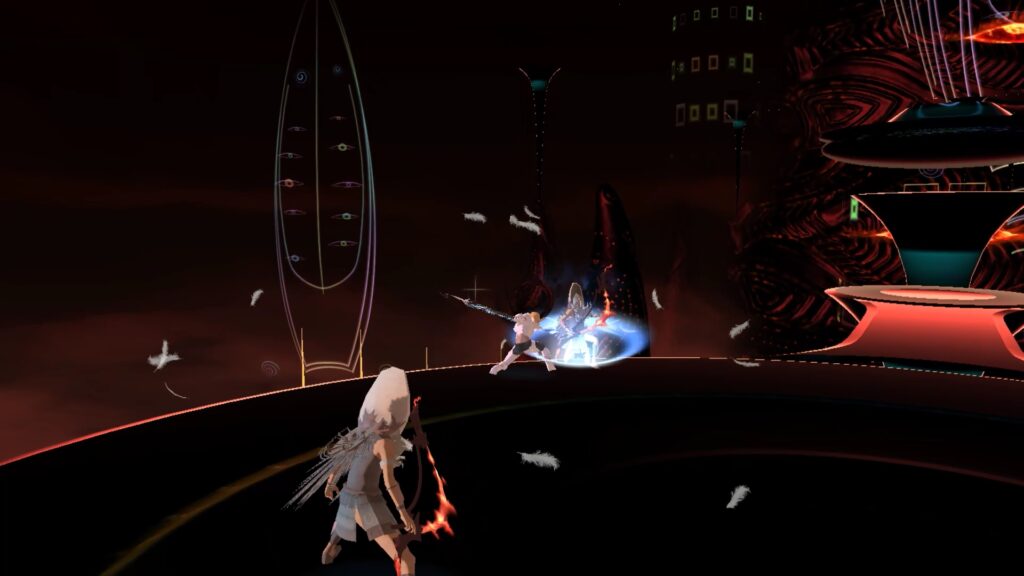 Special Movement (Guard + Jump)
This is the weapon-dependent dodge action though not all of them are great. We go through the variations when we get to the weapons. If you’re unarmed, Enoch does a roll.

Special Attack (Guard + Attack)
They are weapon-based just like the Special Movements. Some are useful but one of them is a head-scratcher.

Overboost and Boost Attack(Purify + Guard)
At some point, you’ll unlock the Overboost function that recovers health on activation and buffs your attack with some special external element. You cannot see how long it lasts so it’s rather a trial & error thing.
If you push the same button combination again you’ll unleash a super attack that is invincible and dishes out a lot of damage but immediately ends your Overboost. It’s best to utilize the Overboost as long as you can before ending it with the Boost Attack. Each weapon has once again a different attack.

Attacks
There’s one attack button with one attack string per weapon. If you delay an attack within the string, you get a guard breaker to obliterate the defense of the enemy.
By holding the attack button you can use the charge attack that can supposedly tank one or two hits, the game recommends utilizing it as a counter-attack to deal big damage but I haven’t found it particularly useful outside of the long-range attack one.
It’s important to note that the Attacks are not cancellable which makes the combat rather stiff and requires the player to be much more defensive and deliberate.

The Weapons
We are now taking a look at each of them and talk about their most notable attributes.

The Arch (Blade)
Attack String: It’s a quick melee weapon with fast attacks.
Special Movement: A diagonal dash into the air. It’s pretty bad as it’s difficult to utilize.
Ground Special Attack: Upward slash that puts the enemy into a juggle state for an air combo.
Other notable things: Weak against The Gale and has a moderate guard that is barely useful.

The Gale (Shooter)
Attack String: Quick long-range attacks that is comparable to a peashooter.
Charge Attack: Possibly the best charge attack in the game as it’s a combo and juggles the enemy around. 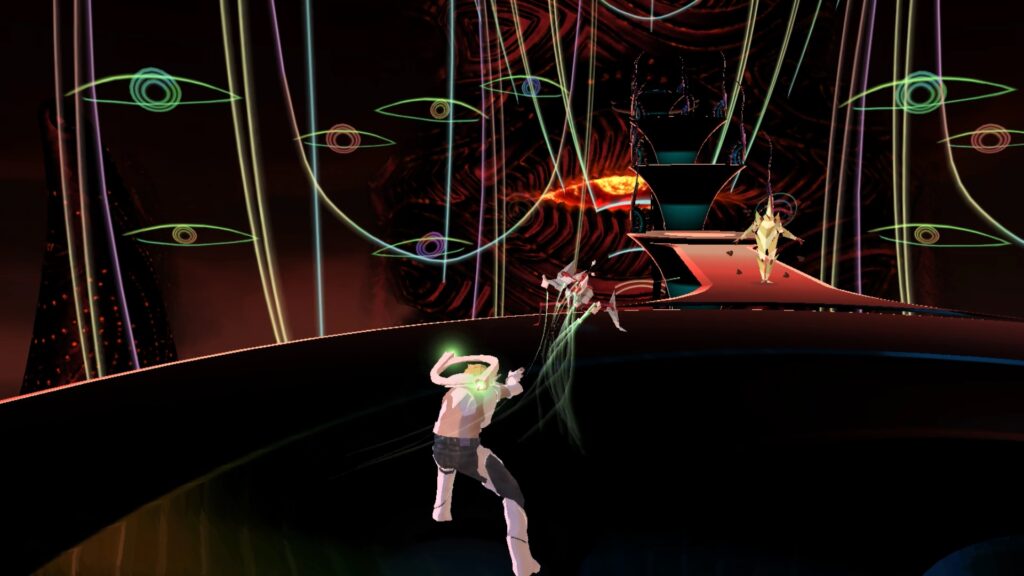 Special Movement: A very fast dash that you can also use in the air. Best Special Movement in the game.
Other notable things: Weak against The Veil and has a nearly nonexistent guard.

The Veil (Shield)
Attack String: Very slow attacks.
Special Attack: Initiates a rapid-fire attack similar to Hajime no Ippo’s Dempsey Roll and does a lot of damage. Best used in 1v1s.
Special Movement: Execute a short dash while guarding.
Other notable things: Weak against The Arch and has a very strong and the only useful Guard. 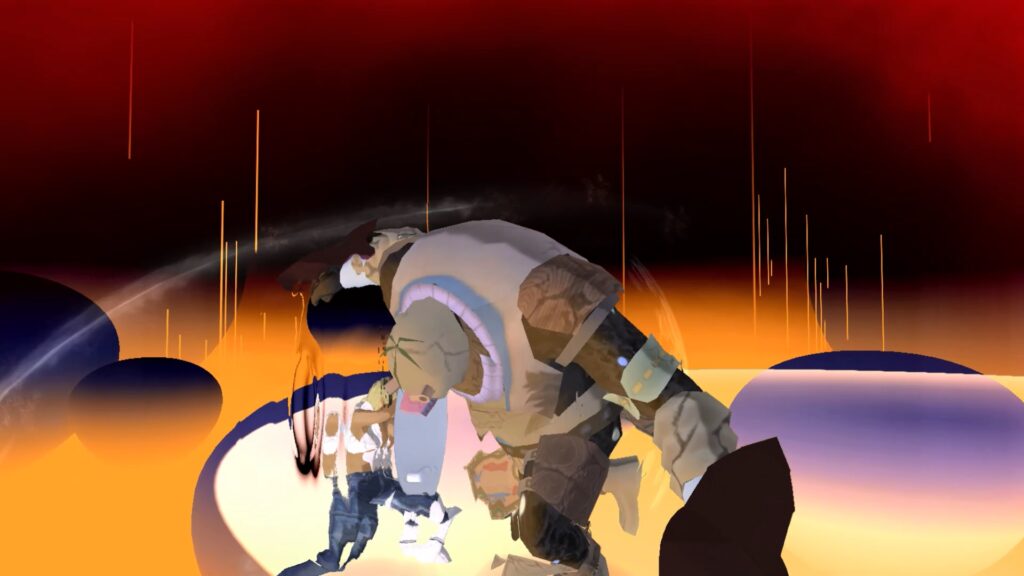 The decision behind only being able to equip one weapon is most likely due to the weapon weakness triangle, which means you can either try to brute force it or try looking for a sequence when fighting them.

Enemies
This is quite a unique design because there are only a handful of enemy types. 90% of the time, you will fight a mook that utilizes one of the three weapons. Though there are different types and looks, they still feel the same to fight against. The most frustrating thing about them is that they have Hyper Armor attacks that just tank your hits, making it difficult to mount an offense outside of a few particular openings.

Bosses
All bosses sport either hyper armor or invincibility that forces a passive fighting style. You have to wait for their attacks, dodge or block them and only then you can safely put them into a stunned state that you can combo. The patterns are simple as much as being one note for the boar-type ones.

Getting downed in Combat
El Shaddai opts out of a HUD and you have to check your status via your clothing/armor. Once you lose all of your armor, you’re one step away from dying. If you get downed it’s not the end yet! You can mash your buttons to get a revive and the more you do that the more difficult it becomes.

Boosting
Supposedly, you get stronger by collecting orange orbs and you can see a gauge in the options menu but I can’t say I was able to feel it. This is most likely because the enemies get stronger variations that nullify the buffs. 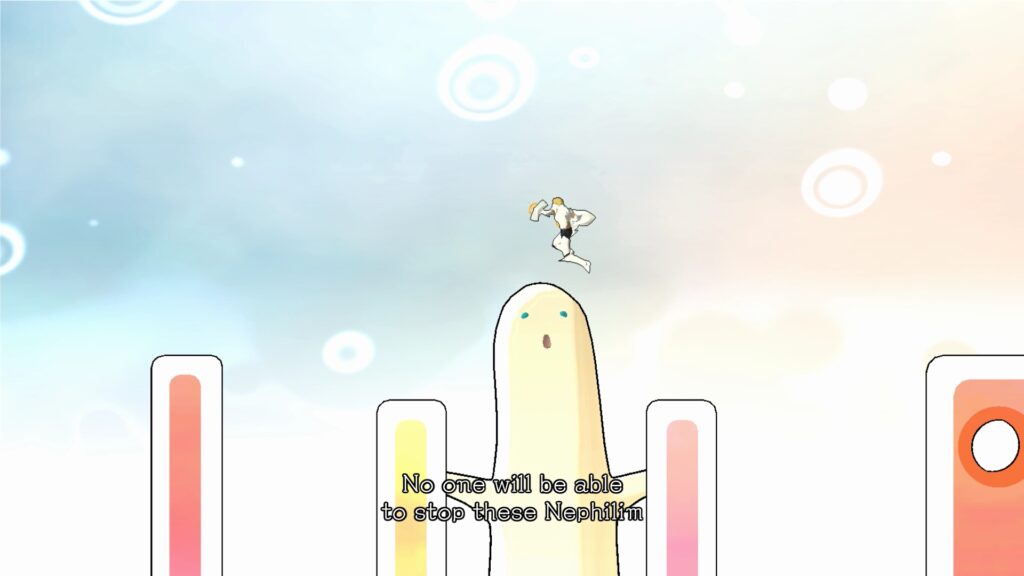 This one is interesting as it uses 3D and 2D on different occasions. All of them are balanced around the standard move set though some places are most likely limited to specific weapons due to their special movements.
The jumps have slightly fixed arcs that are a little bit difficult to control if you want to try some finer jumps.
My biggest issue has been camera angles that lead to jumps that are difficult to pull off because it’s difficult to judge the distance.
I haven’t found such difficult spots in the 2D areas except for one spot that had spikes that poked you back down.

Ishtar Bones
There are some portals hidden in several levels. Once you enter it your goal is to find the bone fragment in a special level that slowly gets flooded with poisonous substance so you only have very limited time to find it. Most of the time it’s on an elevated place.

Gameplay Impression
In short, the combat is simple but stiff while the platforming is just ok. It’s pretty one-note but nothing that you could call bad. Unremarkable is probably the best way to describe the gameplay.

This is where it’s making a statement. It offers a ton of visual variety with a lot of surreal-level design. Most of the time I’m not even sure what’s going on because the bizarreness makes me think that Enoch is in a higher state and perceives reality completely different… or like somebody on some mind-expanding substance. 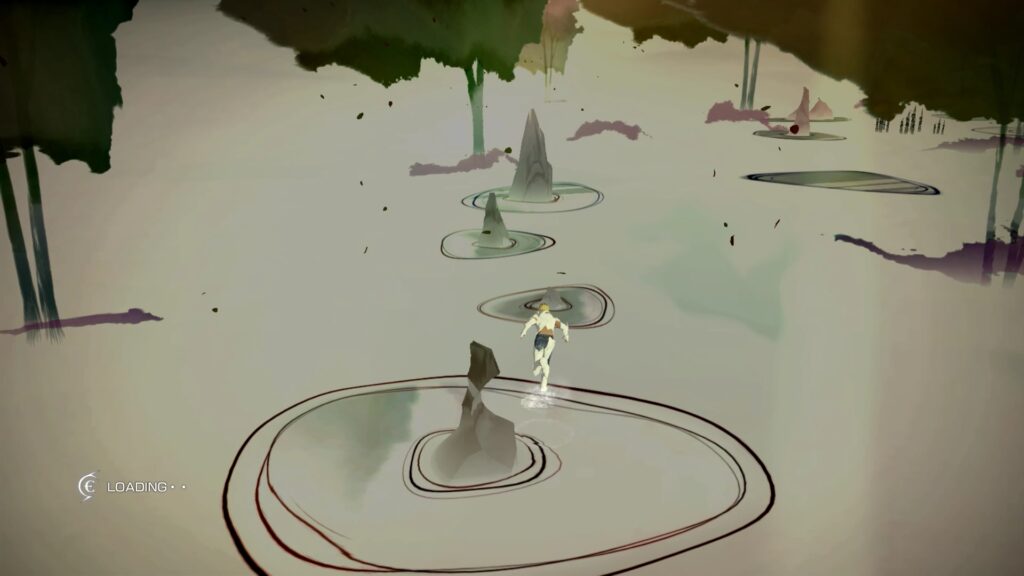 Enemies and bosses are more on the modest side and offer a nice contrast to the levels.
There are a few interesting cutscenes with one of them even getting close to the motorcycle madness of Final Fantasy VII Advent Children.

The music is pretty good and enhances the impact of the visuals. The same thing applies to the sound effects regarding combat. Nothing too memorable in itself but has a special quality when you add everything together.

So is El Shaddai: Ascension of Metatron worth it? I would put about the same entertainment factor as Marlow Briggs and the Mask of Death. Basically, an ok game with sensible pricing that’s worth trying out and sticks out due to its unique visuals, which is why I’m awarding it a Save rating.