This Redwall-like card rogue-like has some interesting quirks of its own, albeit with some imperfections as well.

Roguelikes are one of those genres that are a dime-a-dozen on Steam these days, and one variety of it that’s made the rounds in the past few years has been the card game rogue-like. It’s a good match, as both boast no two games being the same as one of their selling points, and we’ve seen quite a number of great games utilize the concept. Banners of Ruin is one that’s left early access late last month. I hadn’t heard much about it myself, but it struck me as a game with a lot of work put into it.

Banners takes place in a setting focused political intrigue and subterfuge, made no less intense by the people involved all being anthromorphic animals, from mice to bears to beavers. A rival House has done your own, the Blackfoots, a major wrong, and your mission is to infiltrate their home city and register your offense in the most direct way possible. The city is full of guards, however, and you start with just two agents. On paper it’s a suicide mission, but what would a rogue-like be without the odds stacked against you?

Progressing through the city involves picking a card every turn, out of three options. These can include combat encounters, options to improve your party with extra cards, equipment or experience, or blockades you can’t select. There are also cards that remain available for more than one turn or that turn into others if they expire, like a squad of drunk guards that can be fought for an easier fight or fleeced after they fall unconscious. This is where one of the game’s best points shines: the art in general is quite good and expressive, whether it be on cards to reflect their effects, or the character models which strike a balance between how goofy an all-animal cast is with the seriousness of the setting.

Draw Your Cards and Defend Yourself

Battles are obviously an inevitable part of the game, and bear similarity to titles like Slay the Spire, with the main twist being the multiple characters you can have available and the multiple lanes the battles take place on. You draw cards every turn, and the costs for them (either stamina, which is replenished every turn, or will, which only does so each battle) can be divided among your party, meaning you can have one person attack and another defend themselves. Certain cards in your deck, though, represent weapons the team has equipped and their racial talents. Obviously those can only be used by the appropriate character. Each race also has special skills they can activate that will do things from buffing them to adding one-use cards to your hand. Finally the battlefield has two lanes to it, which can affect what certain cards do.

That all sounds quite promising, I’m sure, but here’s where Banners of Ruin has some quirks of its own, and not all of them are good ones to me. Like Slay the Spire, you have armor in addition to health, but unlike in that game armor doesn’t disappear at the start of turns. This can often end up slowing even common battles down by a lot, since even if the enemy can’t kill you, sometimes you can’t kill them as quickly as you’d like. There were quite a few times I drew only defensive cards on a turn and ended up simply spinning my wheels, and it feels like the focus is more on making moves with the entire battle in mind rather than explosive turns where you play everything you can. I feel like that’s summed up with Charge, a positive status effect that boosts the damage on every hit of your next attack by your stack of it before expiring. You can charge up some huge damage with that, but usually not on the same turn.

These are quirks of course, but something I find less quirky is that the game can be a bit meaner than similar rogue-likes. As I mentioned, you have a full party in this game, and coordinating them is an important part of gameplay. Your party members can also die permanently, and when they do it can feel pretty demoralizing. Your damage doesn’t necessarily go down by a whole lot since most cards are usable by anyone, but you do have less options and less damage mitigation since your enemies now have less targets. If they should happen to die in the middle of a battle this can also create a brick hand for you in later rounds, as any talent or weapon cards unique to them only get removed from the deck after they’ve sat in your hand a turn uselessly. A minor detail, but still one that adds insult to injury. You don’t get the opportunity to add to your party that often, and while there are passives meant to give a boost to smaller parties they don’t feel that impactful. A boost to someone’s damage when an ally dies is nice, but you obviously don’t want that happening at all if you can help it, and the Bear class in particular has one that buffs them if they have no allies at all when beginning a battle, which feels like something you can’t rely on unless you’ve built the whole deck around it. Some enemies even feel made to take advantage of you flying solo. 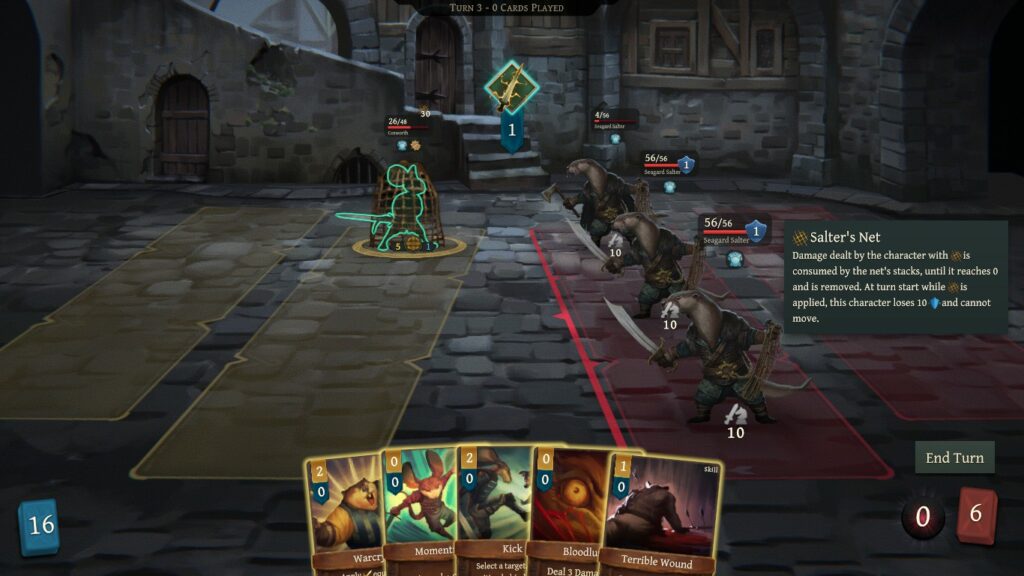 One last unique mechanic Banners of Ruin has to offer is Ruin cards. These are something of a twist to the Injury cards in Slay the Spire or the Blight cards in Monster Train, but rather than simply being useless or harmful cards put in your deck in exchange for a reward these are transformations to your usable cards, sidegrading them to something that can be more powerful but at a cost. Some cards require you Ruin a card during combat to play, which is temporary, and some choices Ruin them permanently. There are passives that incentivize Ruining cards or playing Ruined ones, making it a valid avenue of play.

Overall I had some issues with Banners of Ruin, with some things I think are worth criticizing about it, but I also think it has a lot of enjoyable things to offer. It definitely has a different approach from other card roguelikes, but that’s not a bad thing at all and I found myself enjoying it. I think it will appeal to a lot of people too and therefore I give it a Save.