Immerse yourself in this dark fantasy series, and help Lily remember who she is…and what she’s meant to do.

Often, I feel as though it’s easy to draw parallels from one game to another. It can be an easy line to draw between two subjects in an attempt to familiarize. Admittedly, it’s something I found myself doing during my time with Ender Lilies- but in a good way! In fact, I would say it’s in the best way. Ender Lilies genuinely reminds me of some of my favourite games of all time, and manages to strike a poignant chord in its storytelling that resonates well with me as a fan of various series I will not name.

Not yet, at least.

I’ve talked many times about how some games feel as though the plot is only in place to further gameplay, rather than plot being paid the same amount of consideration. Ender Lilies avoids this issue. The plot is first and foremost, and was initially what grabbed me about the game… (besides the very obvious Metroidvania, Bloodstained, Dark Souls, and Nier influence.)

A side note before we begin: normally, when I play through games, I take notes throughout. I frequently pause, mid-battle, mid-jump, mid level- to write a thought down or document a recently plot thread or opinions. At the beginning of this game, I did just that. It’s the pattern I normally employ, and it’s served me well thus far. After the third boss though, this fell apart. I wanted to keep playing, diving into the narrative, collecting letters, and just generally immersing myself. 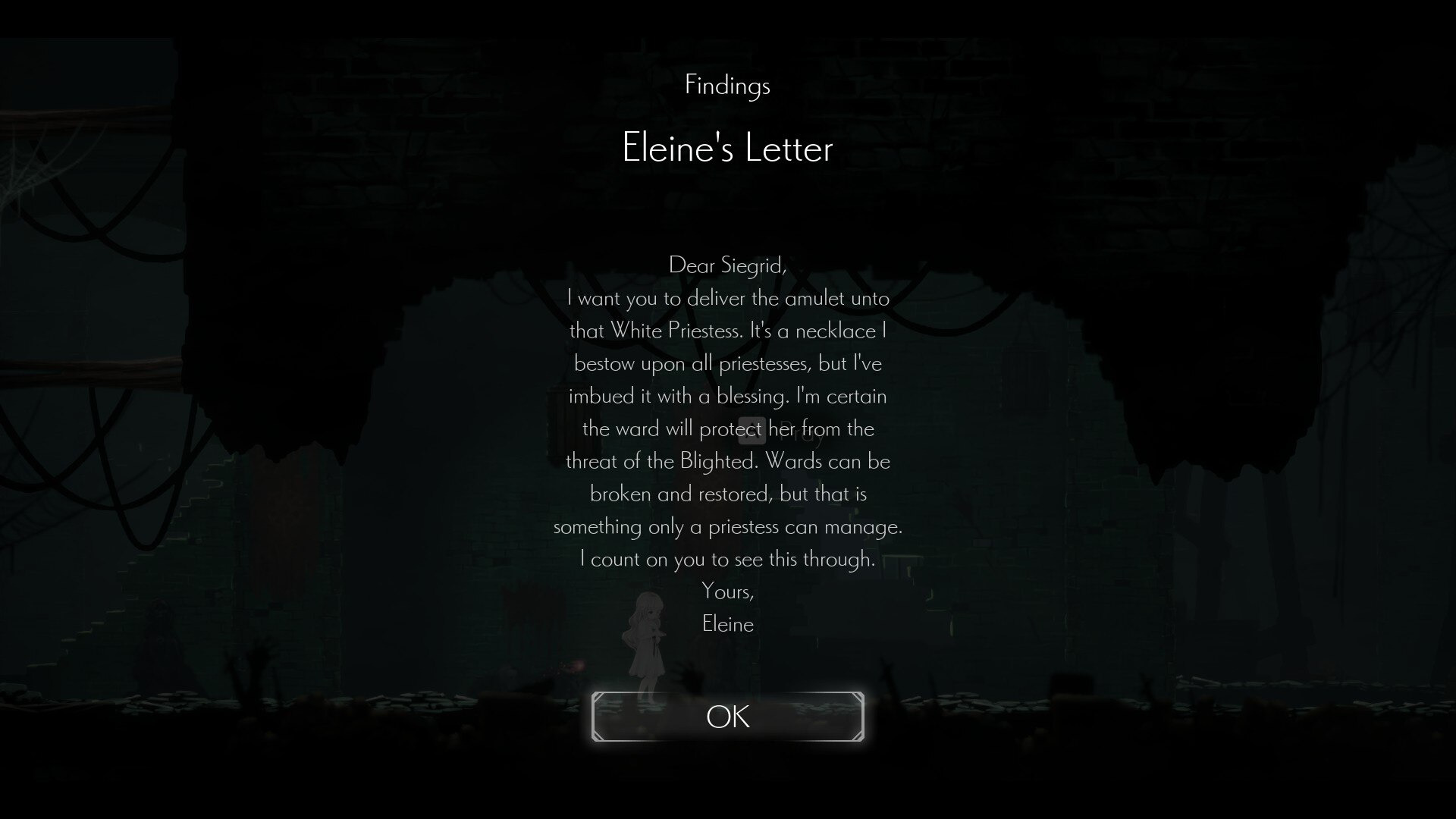 When the game begins, a young girl wakes up because a glowing, red orb speaks to her. That red manifests and turns into a knight as our player character sits up, and it becomes clear that she’s lost her memories. Our guardian seems to think that taking us back through the world is a good way to recall what’s been going on, which initiates our gameplay progression. When you defeat mini-bosses or the major bosses of an area, you get an upgrade that allows you to progress even further. Along with that, there’s always update and narrative pieces to pick up. Letters, notes, journal fragments, you can find them all in different rooms in the map, and they give further insight into the life that the characters within the world led…past tense. 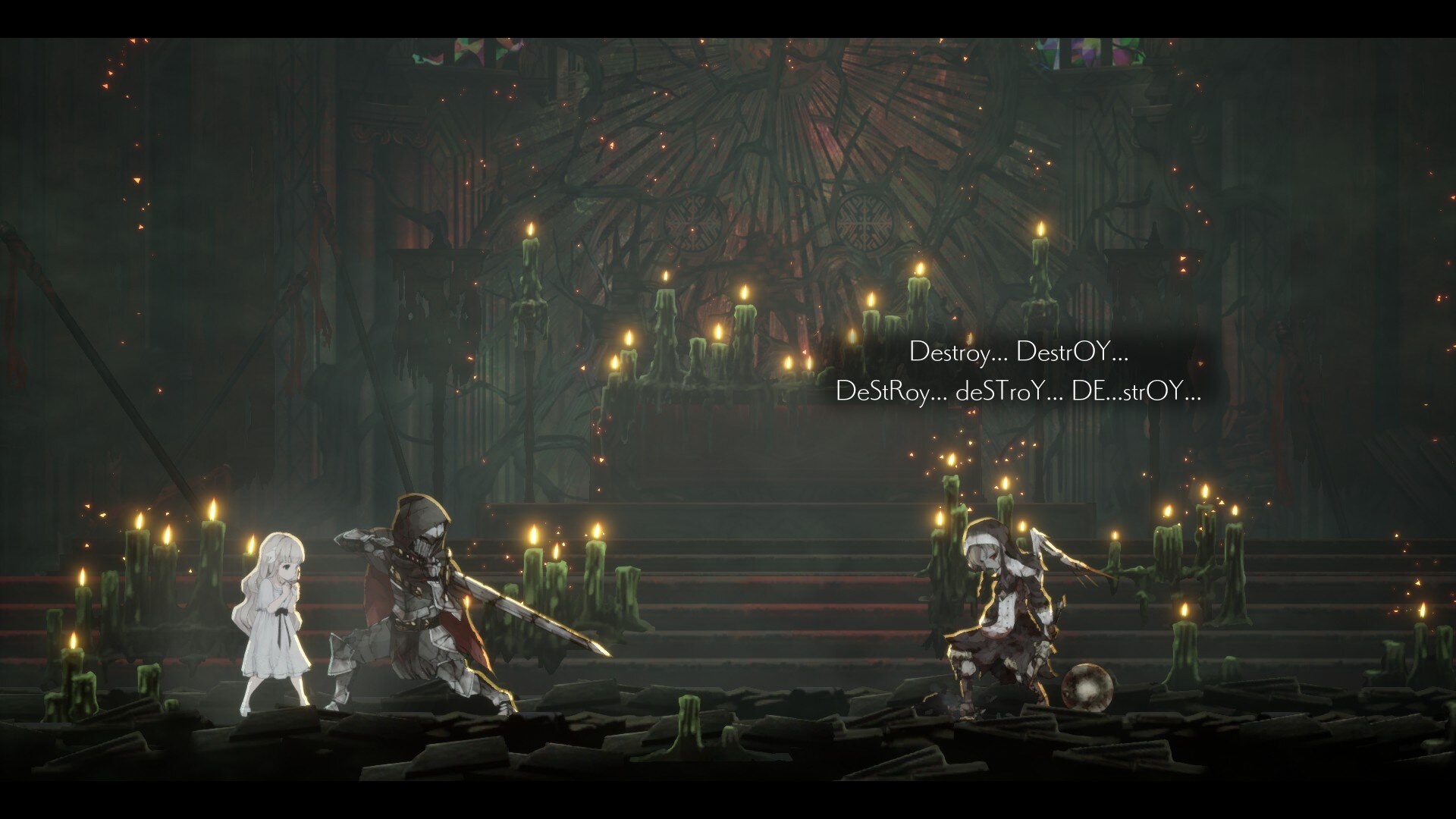 This game gets sad. The main basis involves a blight, one that turns people into undying, mindless monsters (in a familiar plot to another game series that holds a special, beloved place in my heart.) Our main character, Lily, is a White Priestess- albeit a young one. They are responsible for purifying the blight for the people, regardless of any personal costs to themselves. The Priestesses have various guardians and people in place to try to protect them and the structure of the crumbling world around them. Our Umbral Knight- our orb friend- is one of those beings. Another is the first boss of the game, a “sister” who held onto enough of herself to remember that she was supposed to protect the White Priestess. After you defeat her- and every other main area boss- you are granted a glimpse at their memories and backstory. 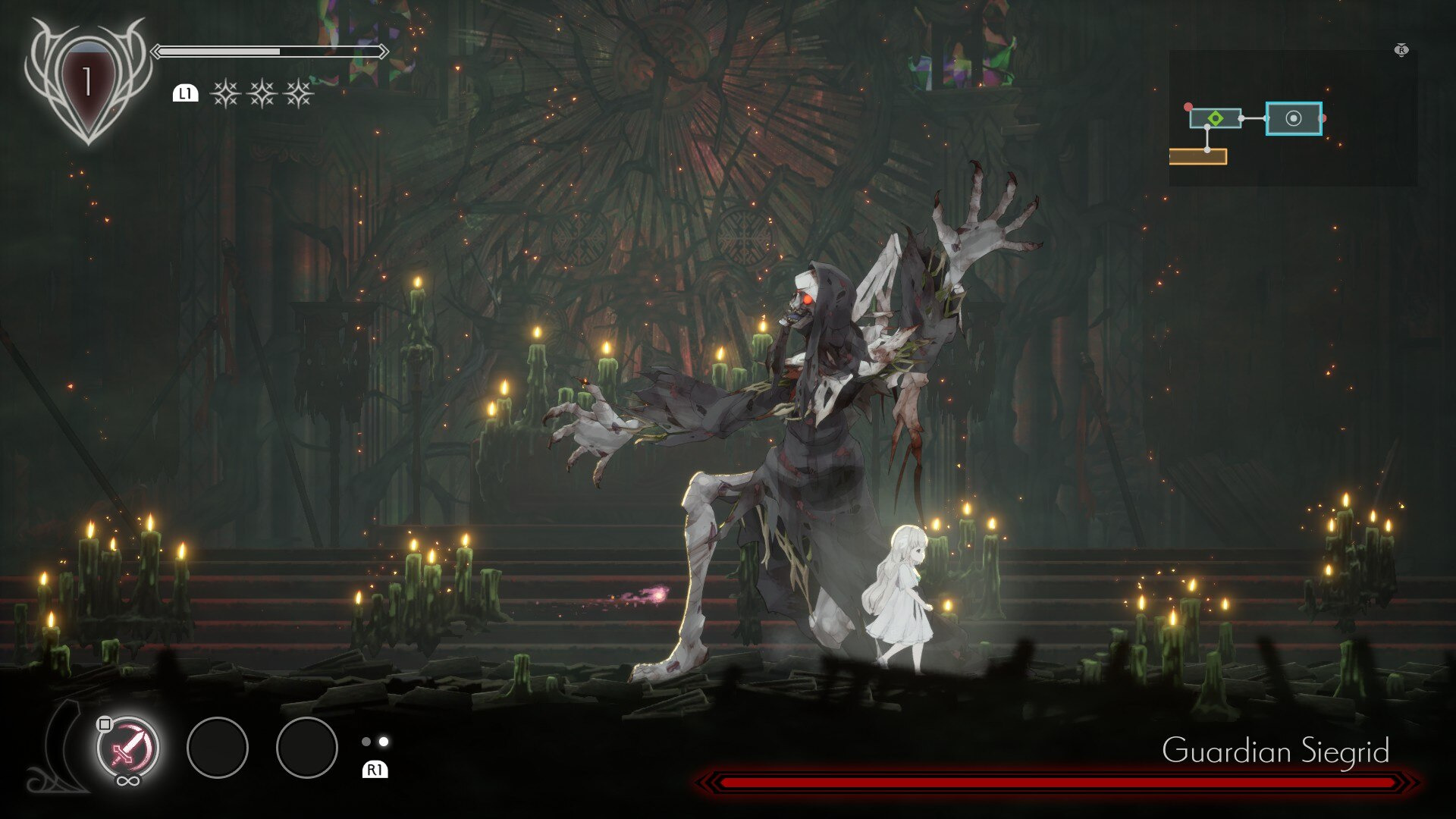 After each and every battle, I was continuously excited to learn more. What was it that these people went through before we put them out of their misery and absorbed their curse? How many of Lily’s memories would be restored by taking that boss’s spirit and bringing it with her to give her new powers to continue to try to save the world? What did our Umbral Knight have to offer from his own, ancient memory?

There’s a lot of dialogue within the game, as well as script and things to read, and all of the above questions get answered. Generally, I avoid talking about end-game things too much to keep from spoiling anything, and will thus discuss the next details under a spoiler, for people that want to go in as blind as possible.


This game genuinely brought some feelings out of me, and I whole-heartedly believe the story and the way it immerses you is the strongest feature of Ender Lilies. 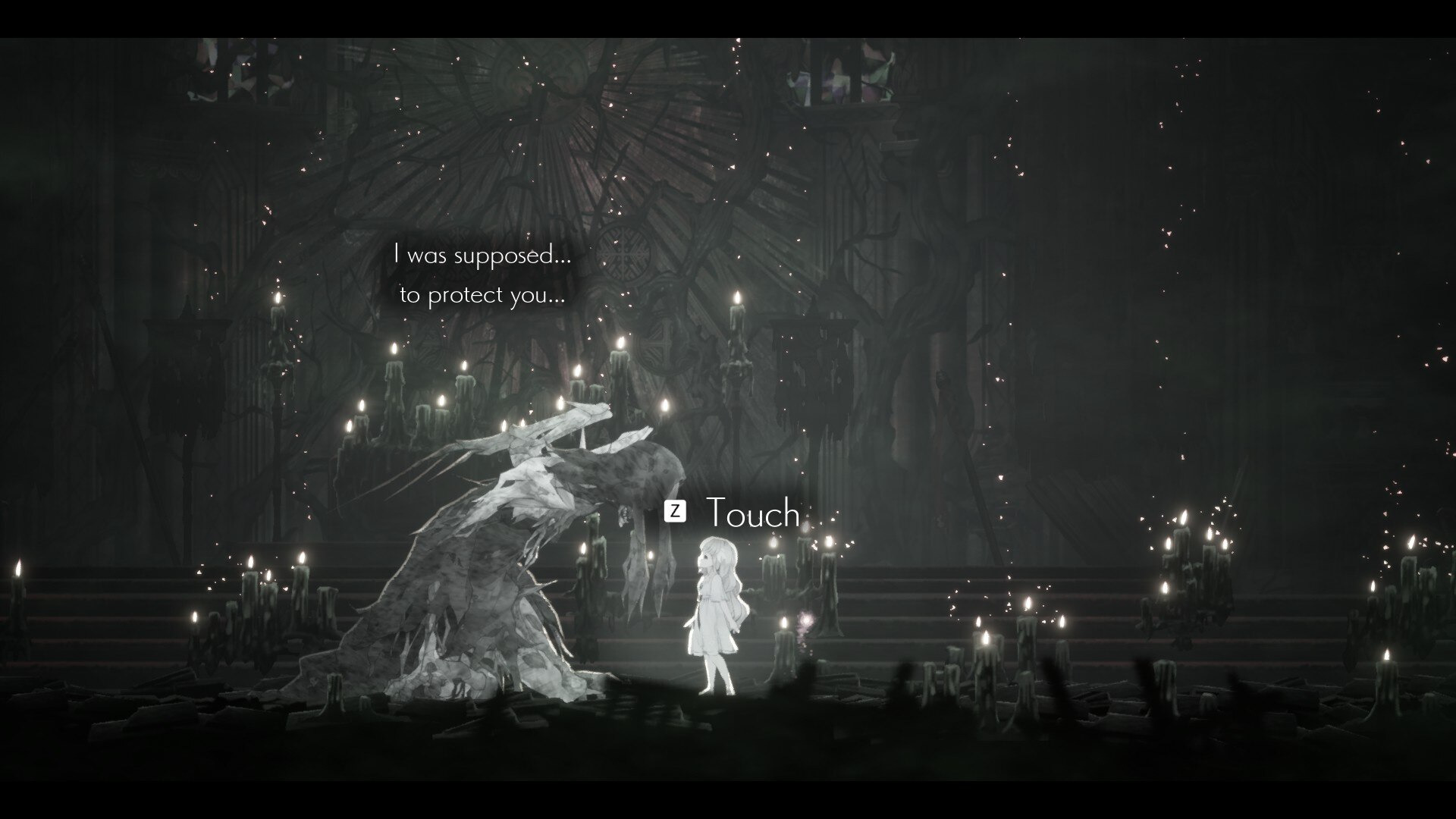 It’s worth mentioning that the music itself is gorgeous. Each area sounds different, your attacks have different sound effects, and the tunes even grow quieter when you’re under water. There are vocals in some of the tracks, and they’re reminiscent of some of the songs in NieR in a way that left me pausing to listen more than once. Seriously, if you pick this game up, take some time to linger in each area and listen to the tracks present.

While the game is a two-dimensional side-scroller, it does a few things in a way I found unique. Our main character, Lily, stands out starkly against almost every single background and level. She is white, pristine and radiant from head to toe…for a while. The further you go through the game, the more you begin to realize things about her sprite are changing. Chunks of her hair are dark, her feet get sort of red, and there are clear effects on Lily from her absorbing all of this blight. 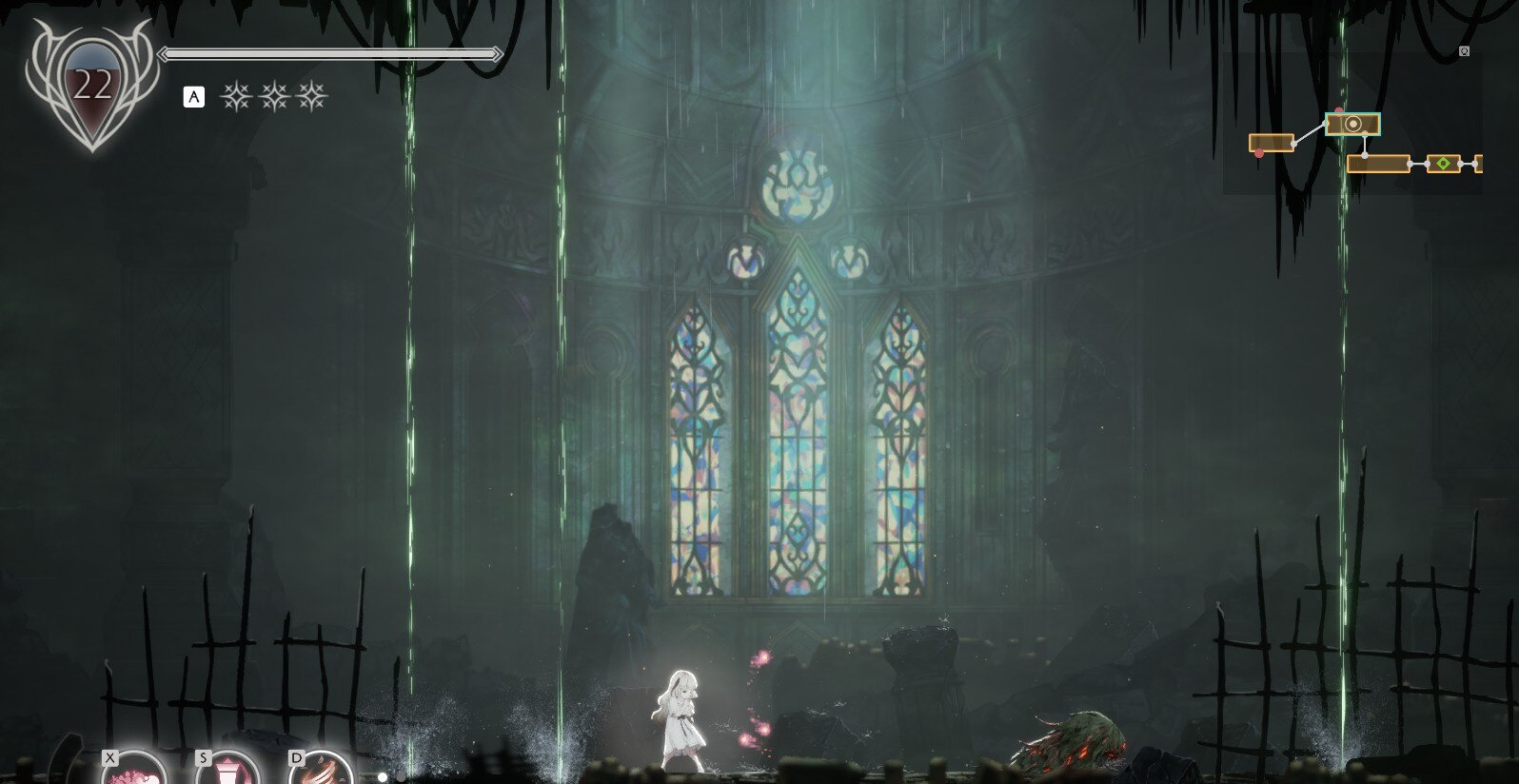 Another set of sprites you’ll be looking at a lot are your spirits – which determine your attacks- and the enemies you’re going to face. Each spirit is different enough to tell apart, even from the thumbnails in the spirit menu before you swap them over. The actual silhouettes that are conjured all also run a gamut, from a bird that flies around with you, to a plant woman, to a massive knight, to a nun. Enemies vary to the same degree, from your typical zombie looking sorts to corrupted mermen to massive, still-empathetic monstrosities. 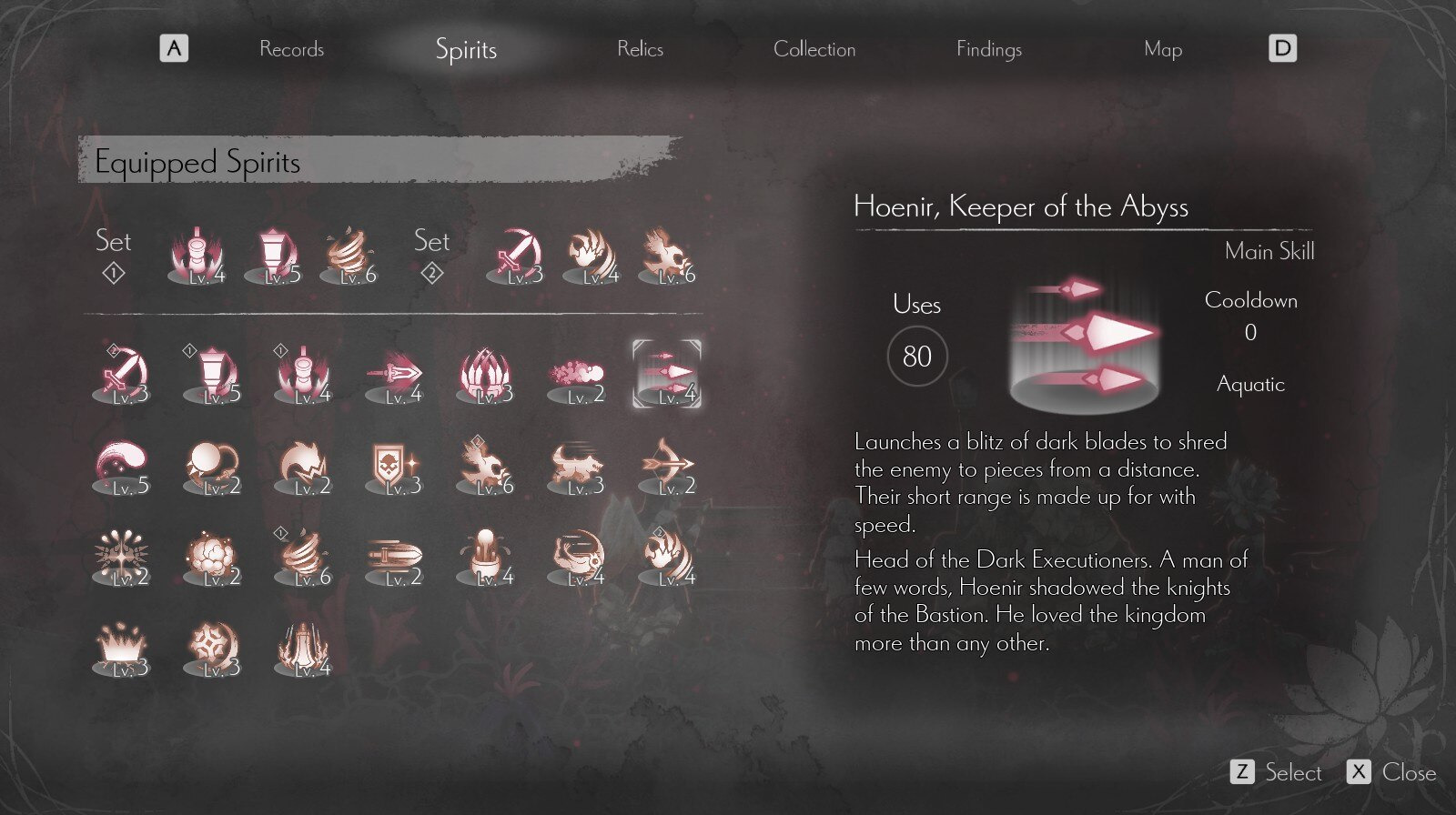 There are secrets in this game, and while some of them are easy to see- like strange looking spots in walls- others would be tremendously difficult to find if I didn’t walk around an unfinished room on the map exclusively pinching or down slamming on most of the spots. While this can be frustrating for some people, I enjoy finding secrets.

The levels, as well, have gorgeous graphics that run a spectrum. There’s the grim catacombs, the dingy stockade, the glowing Verboten Domain, and more. The game developers and level designers did a great job of making each room and zone look different, and I found myself genuinely excited to see what I would unveil next after defeating an area boss and enabling a new source of mobility. The scenes that are shown when you purify a zone’s boss are also beautiful, look hand-painted, and are animated in ways that are somewhat subtle but always gorgeous to see. 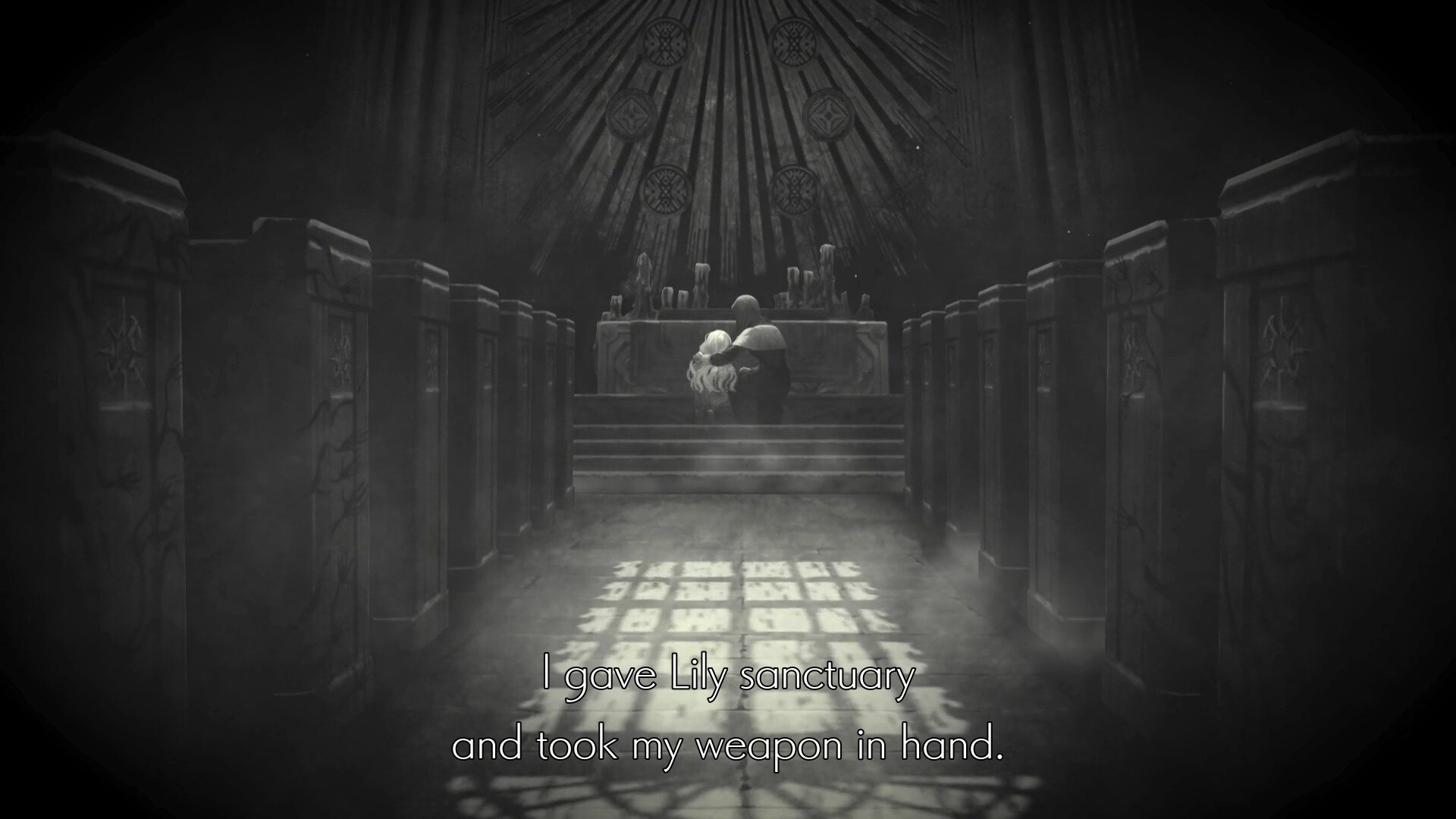 Side-scrolling, Metroidvania style games tend to play decently similarly. I went through the entire duration of the game with a controller, and I recommend that for anyone looking to play this game, or literally any platformer.

The core feature of the gameplay I find that keeps things fresh are the spirits. I mentioned earlier that swapping them out changes the moves and things you can do, and it allows for a wide variety of attack combinations available. You have two movesets that you can swap out, and each set has three different spirits you can equip to allow combos. Each spirit has its own special animations, and there are a variety of different playstyles they lend themselves to. There are magic projectiles you can shoot, nuns that stand in place and swing flails, lunges you can do, hammers you can swing- and so on.

While the gameplay is fun, I think this was, perhaps, the element I enjoyed least about the game. It’s still an 8/10 to an 8.5/10, and I genuinely did love the versatility available…I just found some of the spirits more useful than others. By about the halfway point, I was so rooted in the combos I had that I focused on upgrading them, only trying the new spirits a little before going back to my old playstyle. That’s not a detractor, necessarily, but it feels worth noting. Perhaps I’m just stubborn!
It’s also worth mentioning that there are upgrades in the game that improve your health, and the power of your prayers- which is an ability you can use to heal yourself at any point in the game, provided you aren’t being hit. You also have relics, items you can find in chests that allow you to do things like parry, move faster, and so on, and there are items that give you more relic slots to equip more of these. 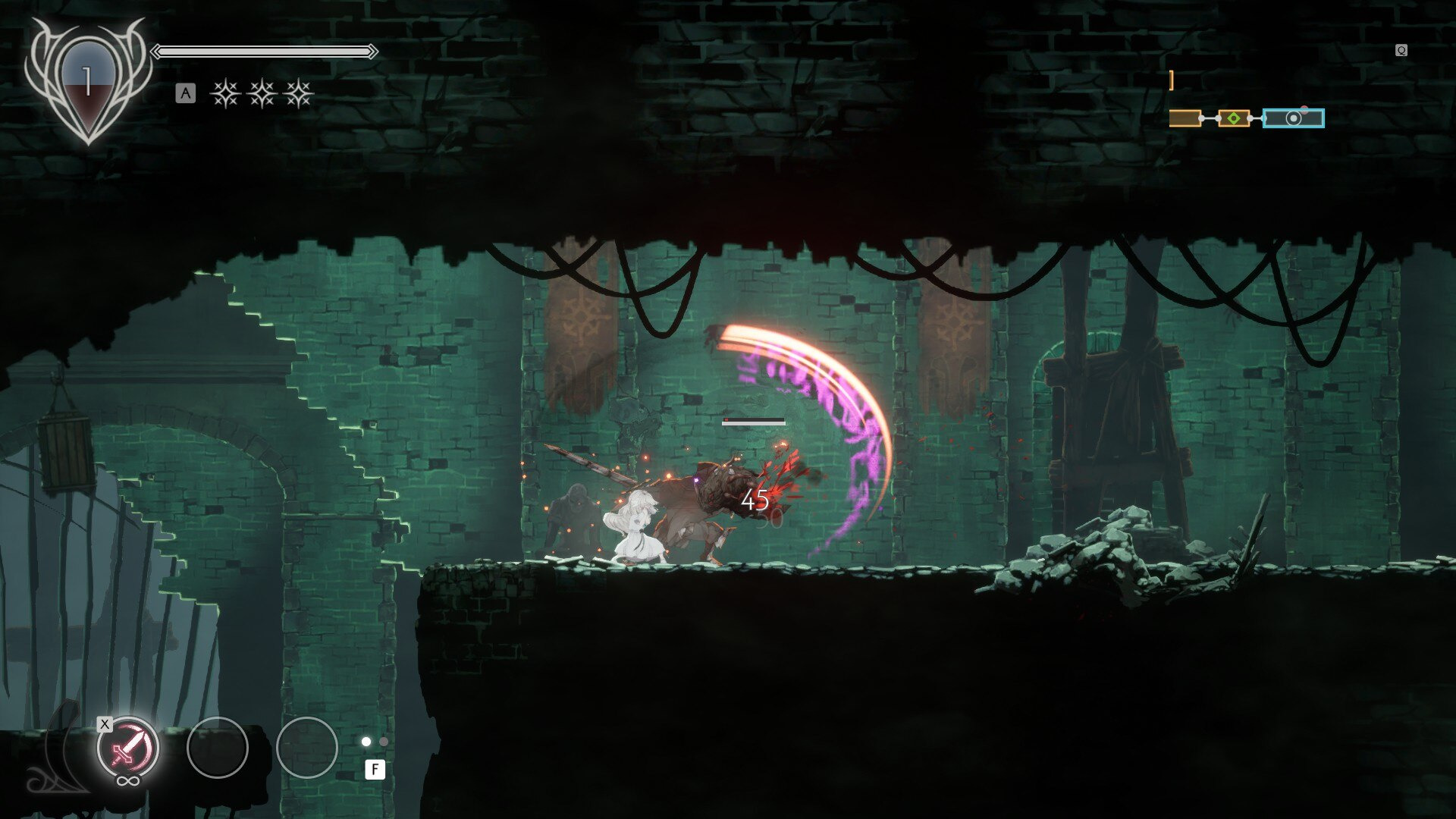 One frustrating element of the game is some of the later platforming. As you get more of the main area spirits that allow both a new fighting move and a new mobility element outside of combat, many of the levels incorporate these elements. There are some walls you can only get over with the double jump, some you have to slam down on to break a strange, fibrous door, and others you need to be able to swim underwater for. I found certain of these skills glitchy- specifically the grappling hook. There were multiple times I would target the wrong hook, go up too high, or miss hitting one entirely despite the game locking onto the hook above my head. 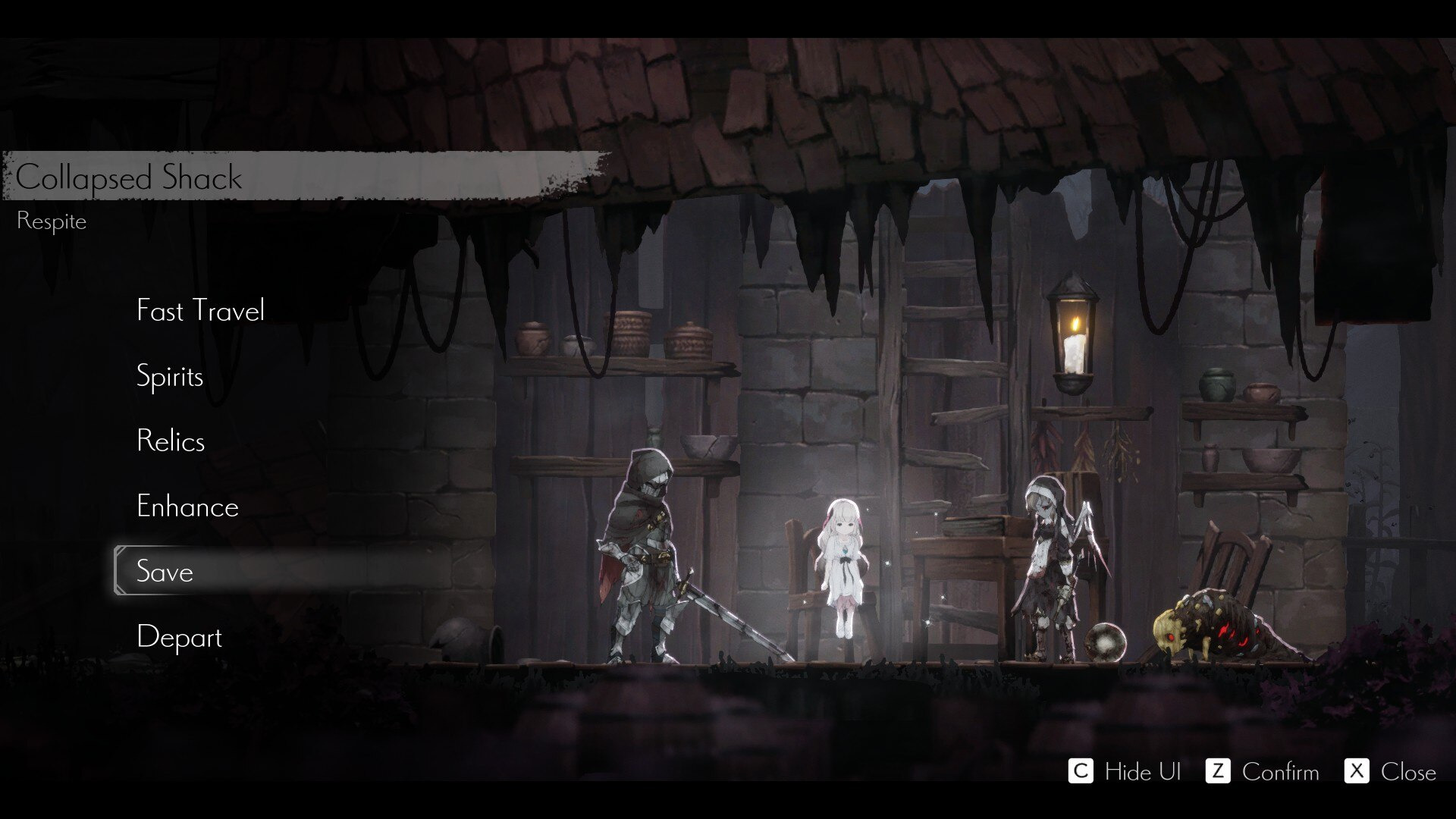 Ultimately, the gameplay is still delightful despite some moves being more useful than others and occasionally frustrating progression towards secrets. There were even some parts I genuinely found to be- and this is rare for me- too easy. The secret ending, at least, requires an awful lot of backtracking, some tricky platforming, and a genuinely difficult final boss, which I recommend taking the time to get to.

My final commentary is this: much like Dark Souls…dodging is genuinely overpowered in Ender Lilies. My advice? Dodge. Dodge a lot. 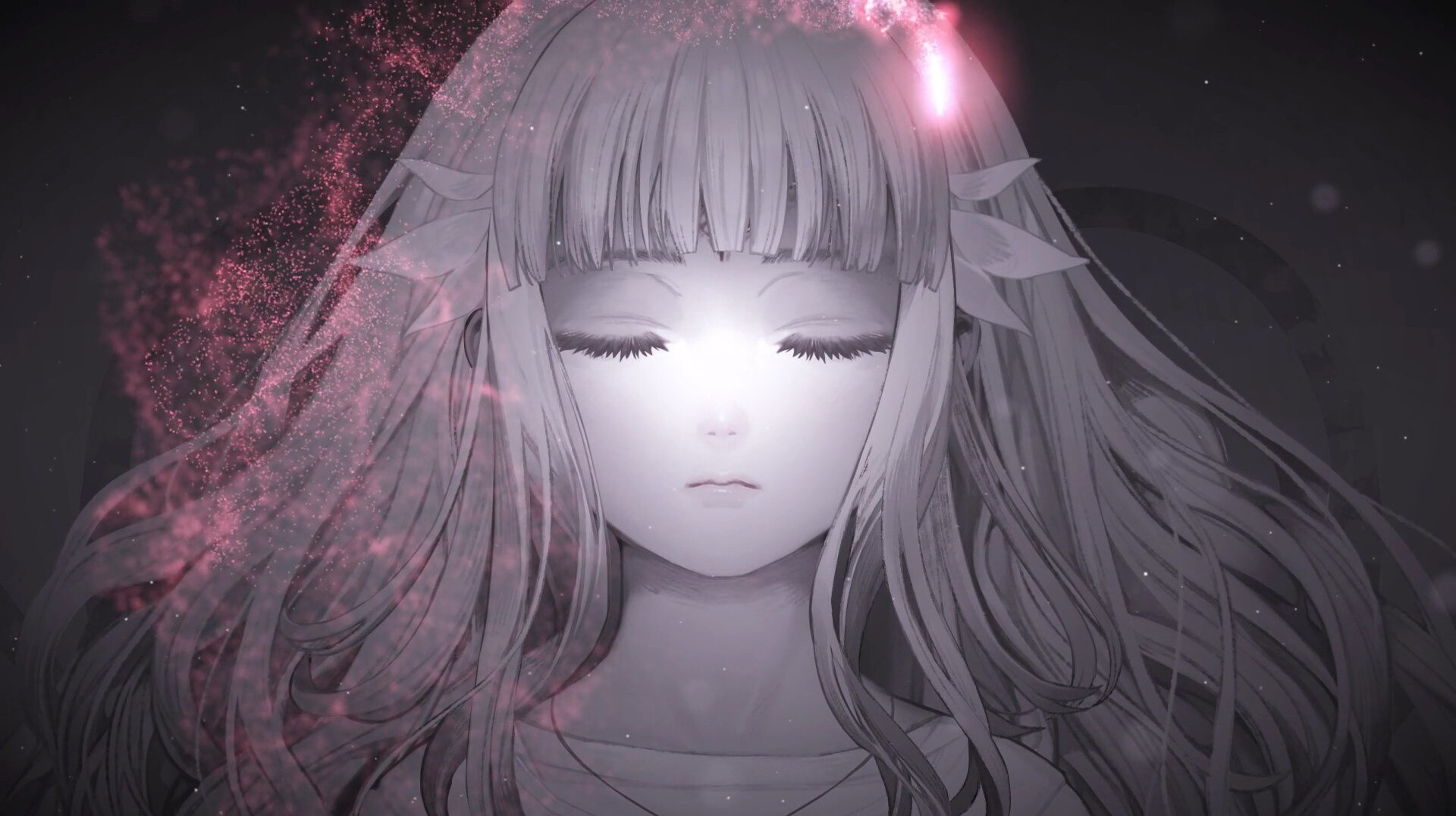 Ender Lilies is an amazing game. I took to it like I did some of my favourite games, and found myself genuinely invested in the story. The final boss made me emotional, I love the tragedy and the triumph in equal measures that is available, and I love that you can learn more if you explore more. Bits of the narrative becomes optional, meaning you could run through only grabbing the main bosses story and then ending the game in approximately 10 hours, should you not wish to linger too long within the universe.

Again, I don’t recommend this. I loved my time with Ender Lilies: Quietus of the Knights, and I can’t wait to see what these devs come up with next.