We can always use a new party game, and the new one on the block is one called Very Very Valet. And, as you can probably tell by the game’s title, you are playing as a valet where you’ll be taking cars of those that don’t really want to park themselves, park them somewhere, and bring their car back once they want to leave. Except, you don’t specialize in keeping every car in pristine condition. We specialize in speed and if you want your car the way you left it, maybe don’t be so impatient.

With four different characters to choose from to play as, and after going through the tutorial to be a certified valet, you and up to three others will go to various parking lots to help people in need of your amazing driving and parking skills. There are 24 levels available for you to go through, and before you even go in, Comms (our commander over here) will give us a little overview, if something new is happening in the level, and a stripped down 3D model of the level to give you a little bit of how the level is laid out. Though, that doesn’t mean the levels won’t throw in a curve ball on how it actually looks and where the good parking spaces are. Once you choose a level to get into, you’ll be air dropped to the map in question. 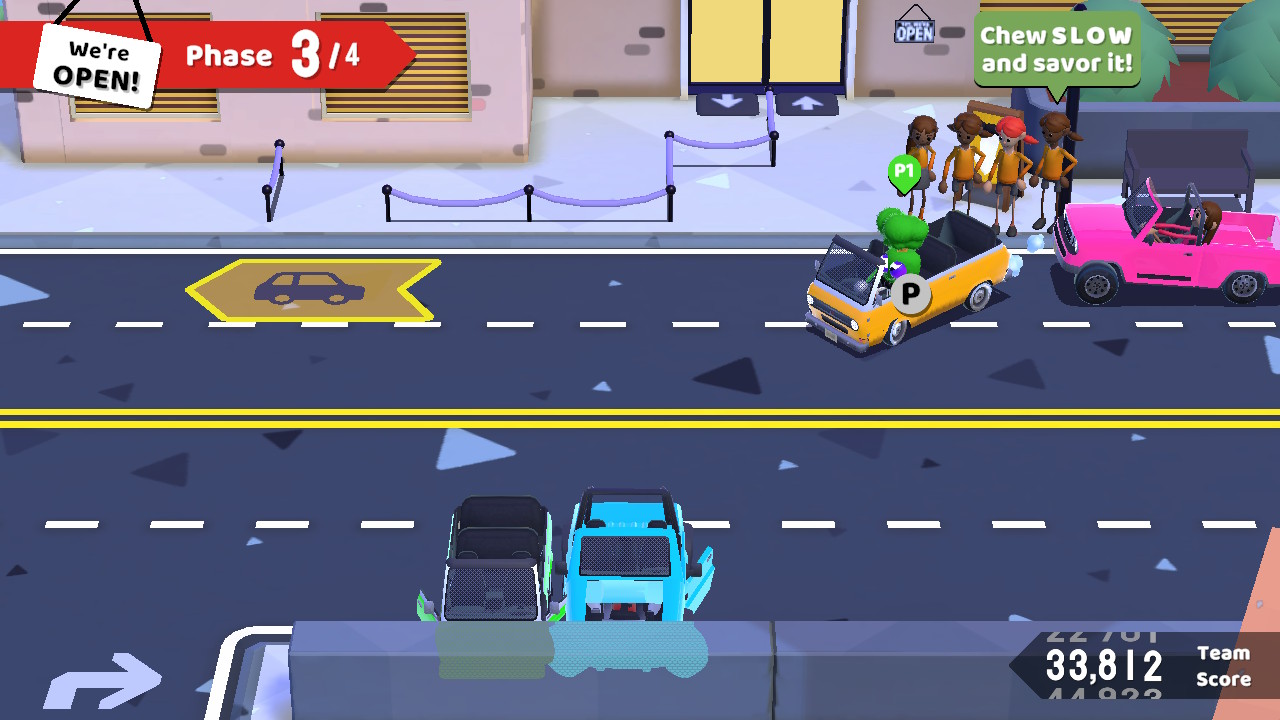 Once you get into the map, and having that tiny but of control with the parachute before you lose it, you’ll have customers coming in waiting for you to take their car. Only the first person in line has a timer, with the more it fills up the less time you have to get into the car. The customer will give off a quick line, sometimes suggesting how long they’ll take inside, and you can park the car anywhere you can. Parking spots? Those are for amateurs. Though, you might want to make sure you can easily get them back to the customer at the very least as jamming them wherever will cause problems down the line when you can’t get the car out. And, when the customer wants to leave, a little flag is put on the car indicating which one you need to take to small return zone before the timer fills up. And if it fills up, the car gets abducted and you will get one less star. You can still finish a level if you won’t be getting any stars, but considering that the last level in an area requires a certain amount of stars, you might not want to get to that point.

Each level really only takes a couple minutes to complete, and at the end you’ll have some clips to choose from and vote as the best. You do have a button to get the game to save that couple seconds moment, but otherwise it’ll bring up moments from random times. Which sometimes is just you standing around or sitting in a car as you briefly go in reverse. Granted, there are some funny moments that it can capture. I do wonder if part of the intention of this was so you have the option add the best clip to your system, but that wasn’t exactly possible. 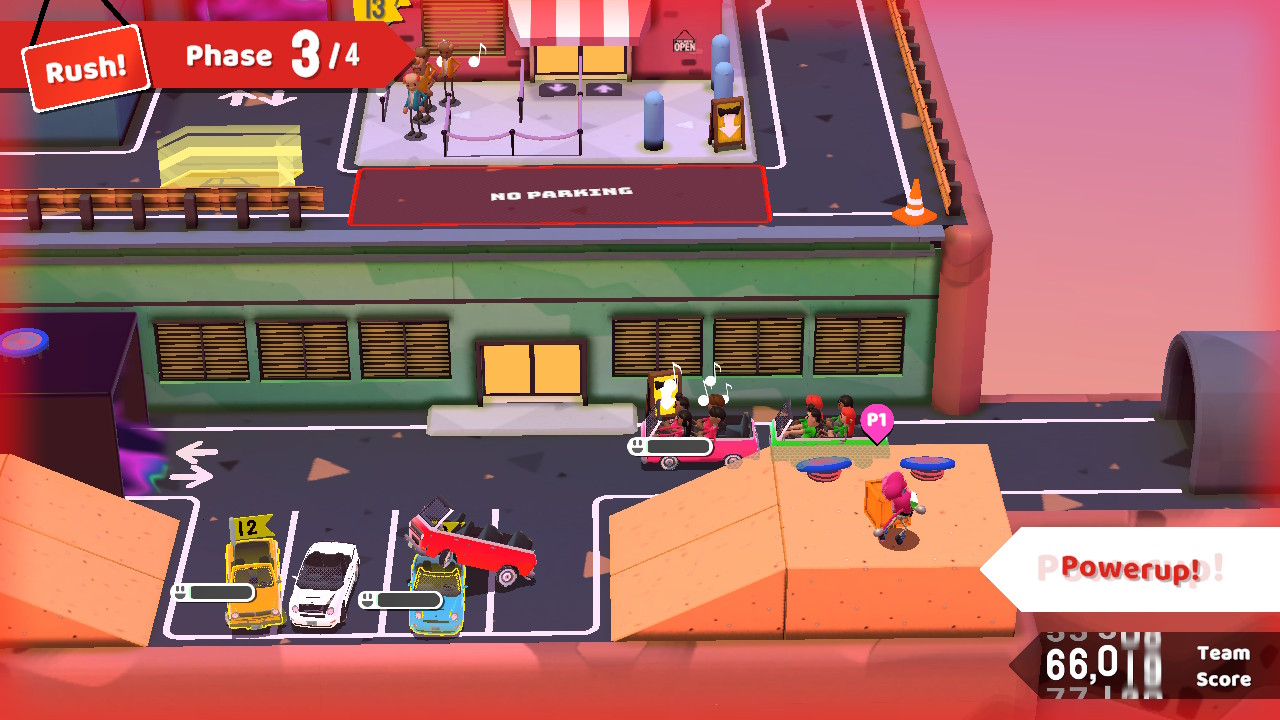 While this doesn’t sound like it’s too much of a problem, it does get hectic once you get past the first couple levels. And the controls will also pose as a hurdle. Well, until you get used to them… and then it becomes painful with slow cars because you got so used to how fast cars are so prone to slide and skid. It also takes a while to get used to how you need to have the car register in park before being able to go in reverse and having a guiding arrow dictate the car. The best thing you can do though is learn how to drift (so you can do those tight turns easier) and the spin in place move (which isn’t taught in the tutorial).

While we don’t get that many levels here, they are all varied and brings in a new challenge for you to face other than how the maps are designed. Some levels will have no parking zones, teleporters, hazards to get in your way like a plane occasionally lifting off, not having any good parking places where it won’t get hit and shoved into a different place by another car, bring cars to get washed at a car wash, and may even have cars already on the level that may get called to be returned because the customer’s original valet is off the clock now. These levels will also have either speed boosts, trampolines (so you don’t have to use a teleporter every time you want to get to a higher elevation), or a timer reset power-ups in crates. You might not want to ignore the crates as some levels are really hard and the power-up for that level could be the best one out of the bunch (aka timer reset). 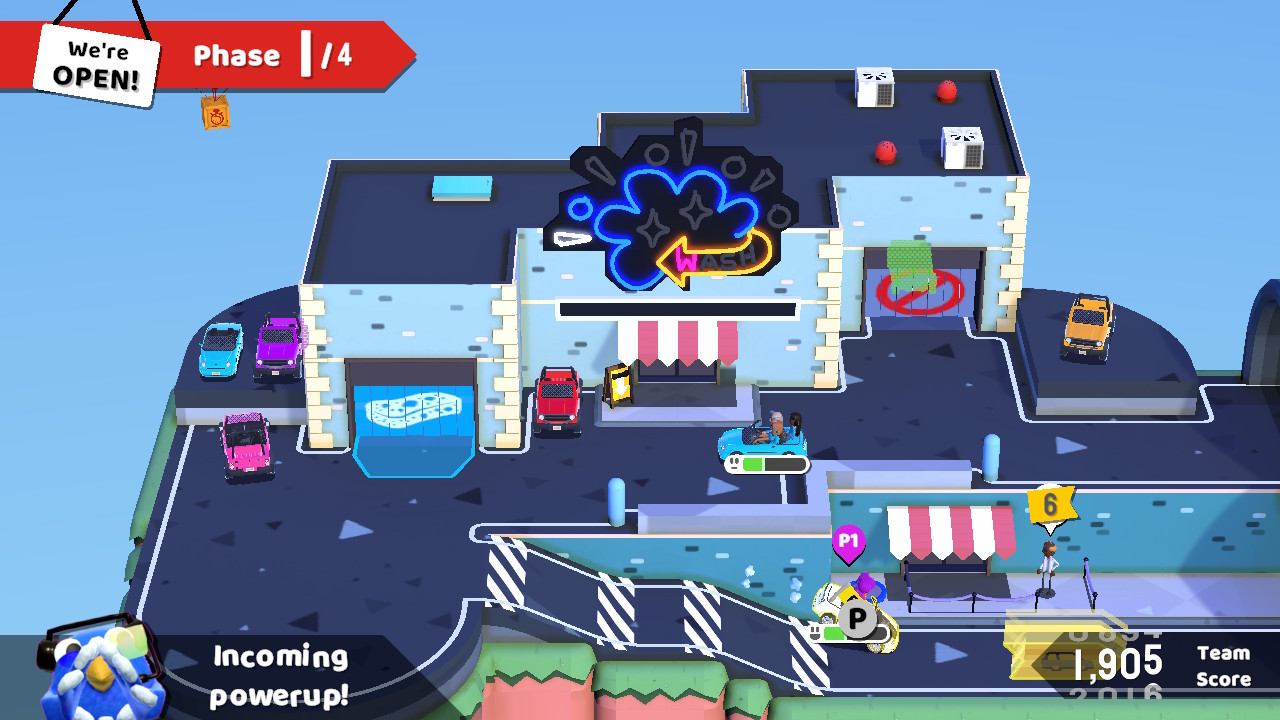 There are also four bonus levels where you won’t be doing the usual valet work, but be timed in how fast you knock down bowling pins, clean up garbage, or sweep the gunk off of roads with a street sweeper. You’ll be given a timer to complete seven phases, with stars showing up on the level that you must get (while in a car, can’t cheat like that) before you return all cars to the return zone or they’ll be lost. 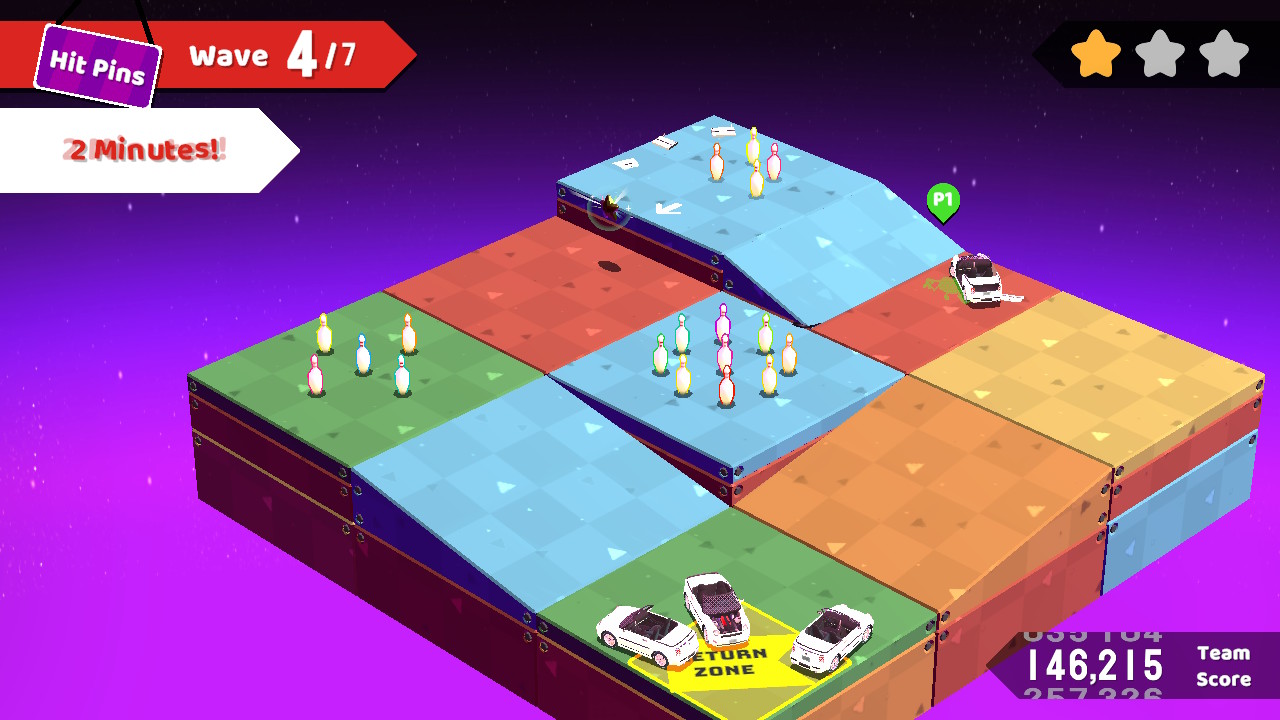 This game can be played in single player, which is what I did at first, and unlike other party games where it’s impossible to progress for yourself, Very Very Valet does make it possible to complete the whole game yourself. There will be times where it’s so close, but you can still get all three stars (it took me a couple tries on some levels, but that’s too be expected). And there is an option to mess with difficulty here if you just can’t do it by yourself. I only had to lower it for two levels, one being the sweeping bonus level and the level after that.

A slight detour, there are three difficulty presets and an option to do a custom difficulty, which messes with how long customers will wait, you can take off the ability for cars to not be abducted if a valet is in it, if the bonus levels will have more or less time for you to complete them, the intensity, if you want powerups and how many will appear, and if you want an extra car to appear in levels. With Trainee being kinder to you (though it’s still chaotic) and Expert being the toughest and probably not one to do in single player. Though, and I just found out now, that you are rewarded with red stars if you complete a level in Expert. 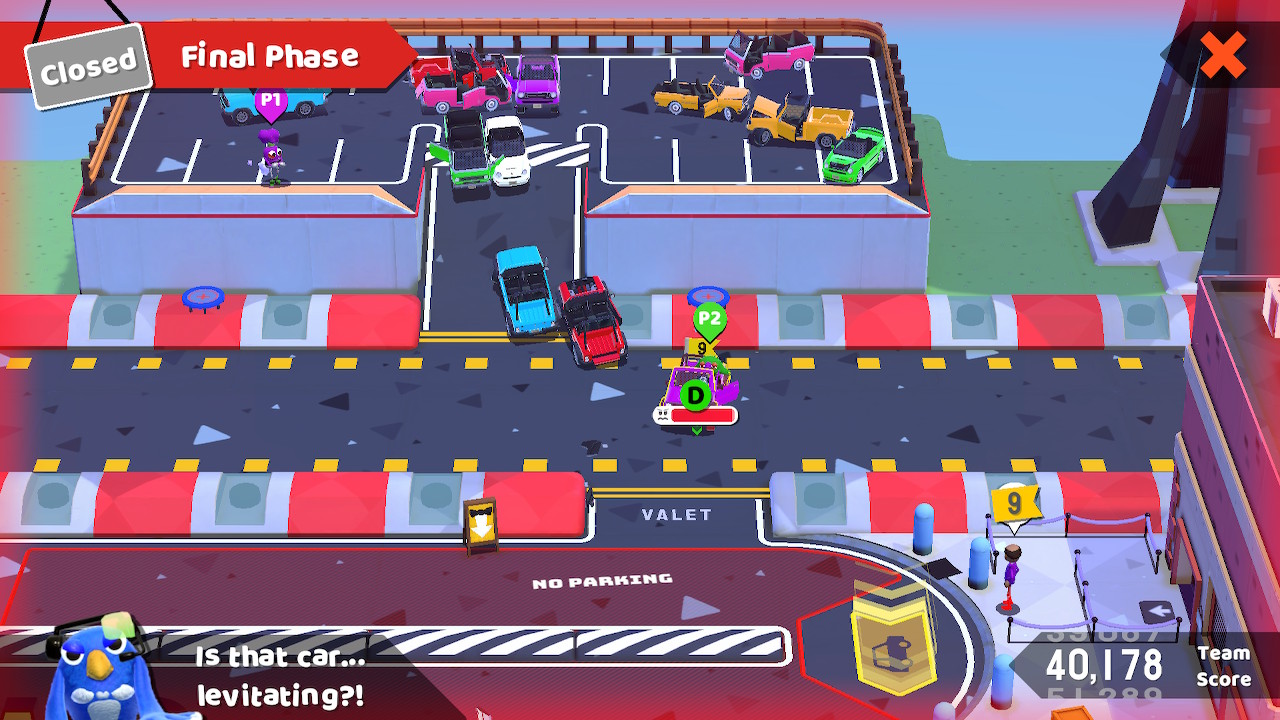 Though, I do recommend playing with others. I was able to talk someone into playing with me and while we only made it halfway through the game and didn’t aim to get all three stars, I had more fun. I can’t really tell you if it’s more chaotic in co-op, as it’s still chaotic in single player, but it’s fun working with another, accidentally bumping into each other, and trying to develop a strategy on the fly so (not many) customer’s cars are abducted. More than one valet can also be in a car, so if it’s one that’s in the red and maybe you’re better at getting out of jams than them, you can easily switch players without risking losing a star. 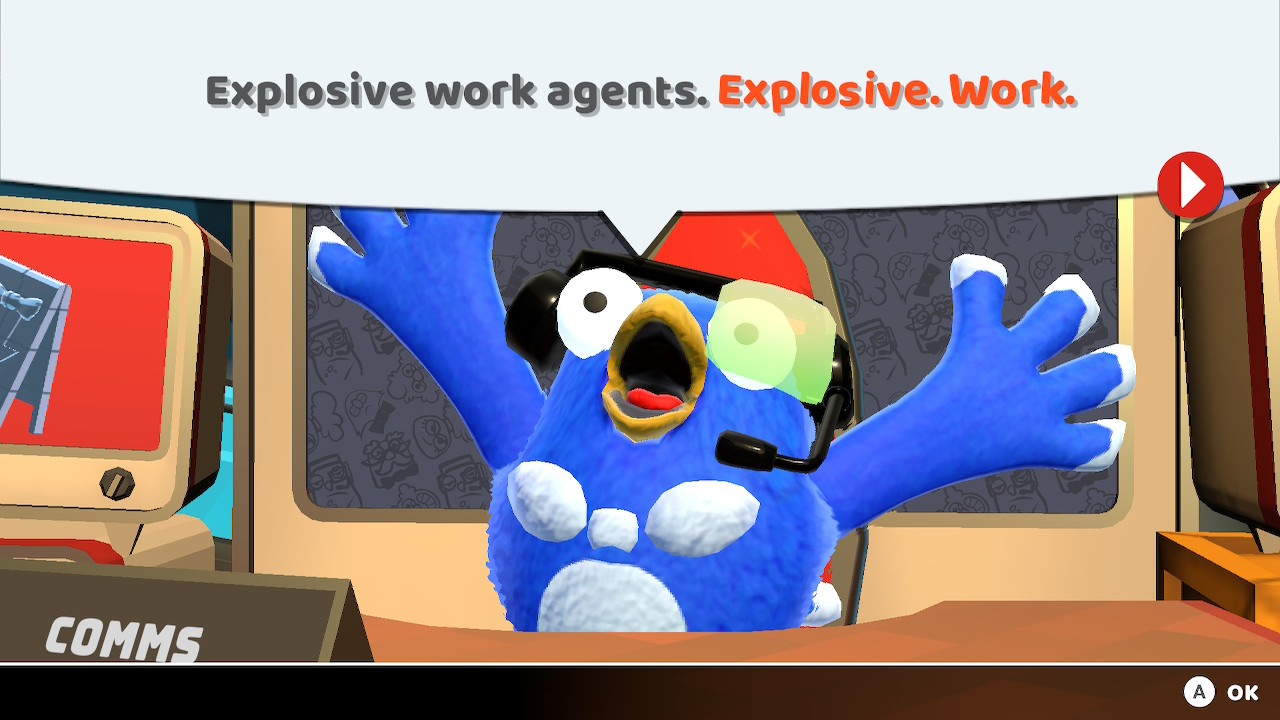 Very Very Valet is an enjoyable, short, party game where you can finally play as a valet uninterested in keeping your customer’s cars in a good condition. I do wish there were more levels here (as well as online co-op) as this does leave me wanting more as I really liked the variety of levels we got and the challenge they posed. However, I’d be a little hesitant to buy this if you’re only intending to play this by yourself (even though it is still fun), but if you have someone (or three) that can come over and play this with you, then yeah consider picking this up. Like I said before, this is more fun playing with others and considering that this can be realistically finished in an afternoon or two, depending on how good everyone works together and if you want all three stars in all levels, you won’t really have to worry about the group not being able to finish with everyone you started it with.