Touhou Hyouibana ~Antinomy of Common Flowers. Is another installment of the official fighting game developed by Twilight Frontier and Team Shanghai Alice titled the 15.5th part of the famous Touhou Shoot’em Up Series.
The first one was a major milestone as it was the first Touhou game that made it onto consoles in 2016. 5 years later we’re witnessing their fruits of labor on Nintendo Switch and PlayStation 4.
The PC version has been released for quite some time and you can find an English Fan Translation patch roaming around on the internet.
Note: This review is from someone who has never played a Touhou game.

Story: the Mystery of Perfect Possession 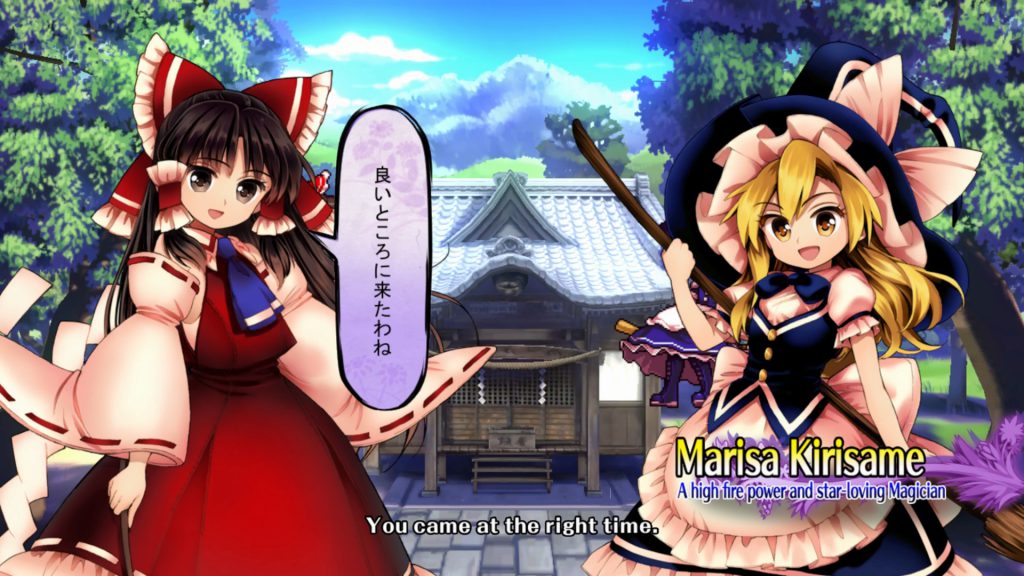 The game has a story mode that follows specific pairings going through some fights and trying to find out where the mysterious “Perfect Possession” comes from, its purpose, and personal motives such as creating the strongest team.
Perfect Possession is a special state where another person can take over somebody while retaining their physical body.

It’s a lighthearted story that is told in conversations between the combatants before and after the fight. You follow each team as they unravel the mystery. Despite the simplicity of the story, some things can confuse you.
The individual stories seem to have a loose connection set up by the Prologue team in sequential order. Each of them provides a small bit of information that moves them closer to the solution. To be honest, most of it consists of finding people and beating them up for science. Don’t expect anything grand like Blazblue or Mortal Kombat.
Furthermore, this story has a connection to another game that contains the Urban Legend Incident (Touhou 14.5), which doesn’t get an explanation in this.
Characters don’t get a lot of context on who they are and there’s barely any attempt to introduce them. You can still get the gist of things without all of the prior knowledge though.
This game feels geared towards fans and does very little to entice newcomers into the world of Touhou.

There are about 10 teams and you can expect ca. 20 minutes of playtime for each pairing.

Translation
The story comes with subtitles while keeping the original Japanese speech bubbles. Special Magic and Trophies didn’t get any translation either, which isn’t anything game-breaking unless you like trophies. I could also find some typos though nothing much worth of notice. 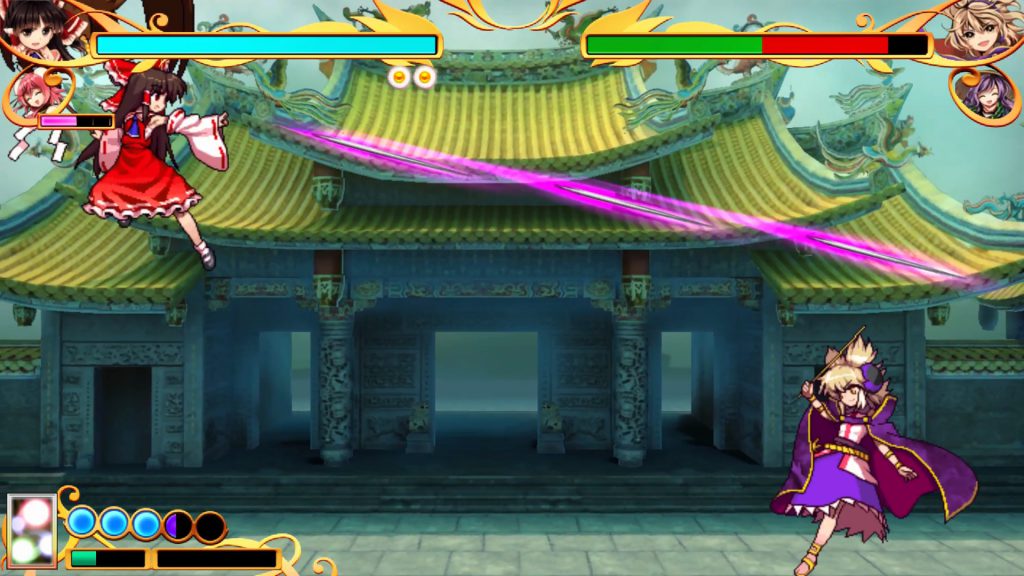 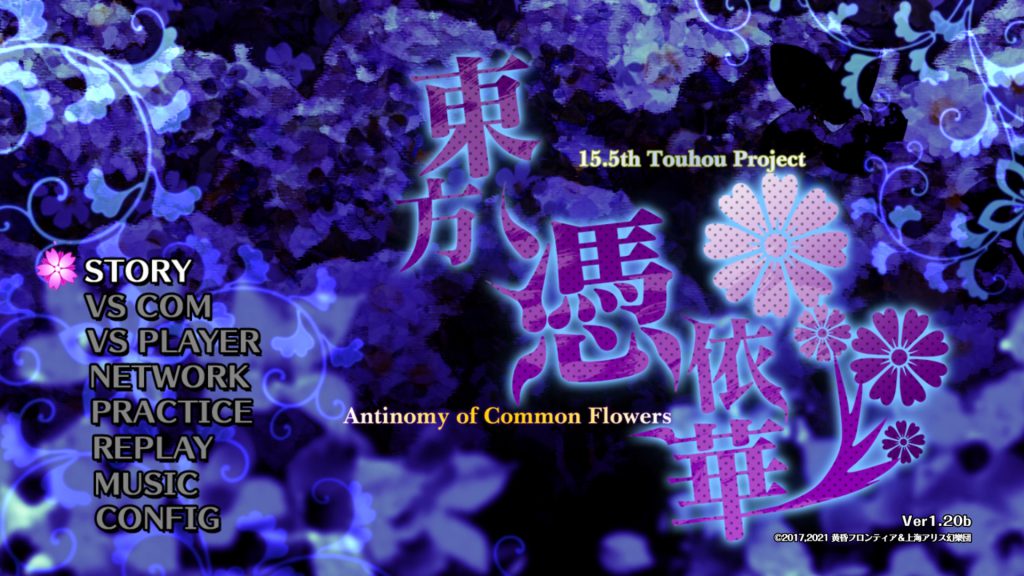 This is all there is. The meat lies in the Story Mode for singleplayer though it’s different than normal play and comes in 5 difficulties. Unfortunately, this also means that it’s rather below standard when it comes to content.
There’s no Arcade Mode for a quick rapid play session and you have to use VS COM instead. Street Fighter V got a lot of flack on its launch because of this and thus it can’t be overlooked here either.
There’s also a training mode that comes with standard options like gauges or dummy recording/replay. It’s a good place to treat it like a lab for checking out the individual characters and their synergy. As the game doesn’t come with any special inputs, there’s no command list available.

Online(Netcode) Performance
I tried the online mode with someone I usually have an acceptable connection with. The result was a discouraging slideshow. I’m not even sure if it’s better to just use Share Play with one of the players streaming the game instead. I know from reports that the PC version doesn’t fare much better.

The lack of a tutorial
With this, I mean a complete omission. Despite its simplicity, some things that add depth to the gameplay are less apparent. A basic tutorial that covers all basic options would be preferable, especially since there isn’t even a manual to alleviate this issue.


They might seem complicated at first but the advantage of its design is that buttons have fixed uses per character. Inputs are comparable to Smash Bros where the move changes depending on the direction and button. No quarter circles, etc.
Melee attacks automatically lead to an auto combo and are the most cost-effective way to dish out big damage. Getting tired of the opponent blocking? You can throw them point blank with a tap forward and Melee though I wasn’t able to identify a way to decide on the direction of the throw as they are important for space control.

Basic Gameplay
There’s a twist to the usual 2D fighting game gameplay by making the characters fly. There’s no crouching, instead, you can fly downwards that mirrors a jump.
Melee is an option but you have to create and find the opportunities to zero in on your opponent. Combos are also rather limited by invincible states to prevent infinite combos.
There’s a wealth of offensive and defensive options to choose from to experience an exhilarating battle comprised of slick maneuvers and masterful strategic execution of plans that begins at the character select screen with 19 characters.
It also gains some extra depth by having 2 characters available in a tag system that consists of Master and Slave both with their unique utility.

Mana Orbs
To limit a spamming of moves there’s a special safeguard that consists of Resources visualized as 5 Orbs that you deplete with each Projectile or Special Attack. Those recover over time relatively quickly but in this game but don’t forget that this can be a high octane game and a few milliseconds can feel like an eternity.

Possession in Defense
By paying a certain % you can escape various situations like an escape while blocking or use it to execute an invincible dash to escape further pressure from the stunning state. There’s even a Burst mechanic that blows away the opponent.

Possession in Offense
Most of them are used to extend combos to dish out additional damage and are not available when the opponent is blocking since it’d create far too much pressure. These are best used at the end of a combo and are executed by pushing the tag button. 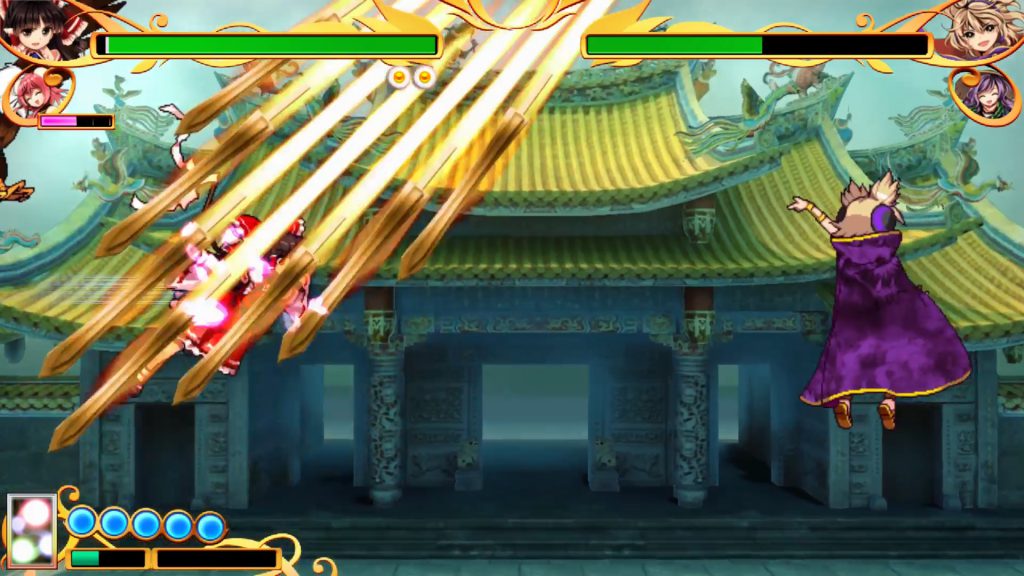 They are a special mechanic in this game as they are invincible against projectiles. Anticipate your opponent’s Projectile correctly and you might get a shot at bringing some hard-hitting hits in. 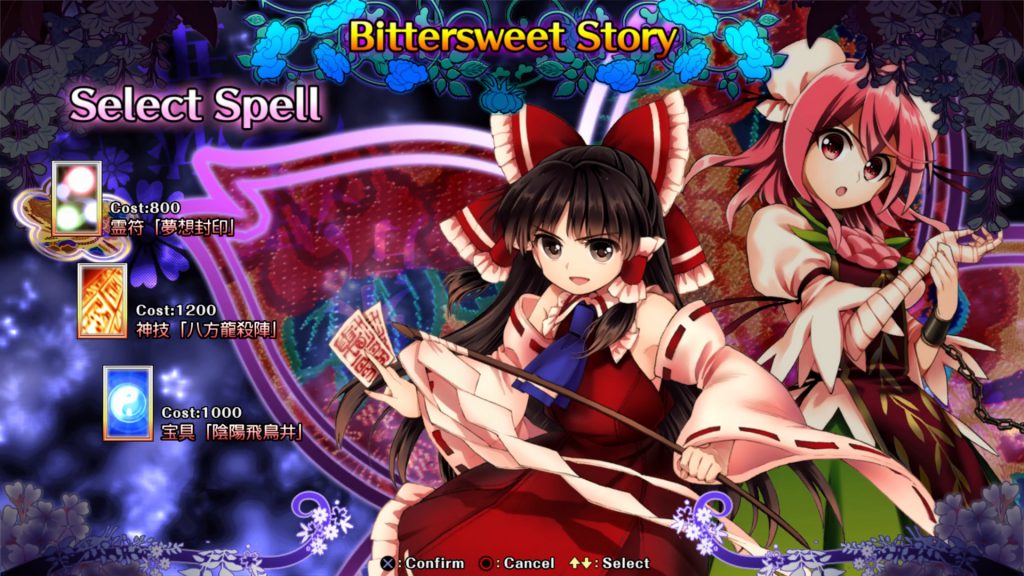 At the character select screen, you’ll have to decide on one of the 3 special spells for the Master Character. Each of them has a different cost that you can see at the bottom of the screen while in a match. That special gauge charges up with your attacks that make contact against your opponent.
You have to ready them first before activating them and they take some time to execute so try to find a good situation before you decide to use them. Some do big damage others have a utility function instead like covering the screen with projectiles to limit their movement.

Super Moves
At a full Possession and Special gauge you can unleash a super move that deals huge amount of damage but it’ll be very difficult to use it in a match against another player since you can block it. The best situation is most likely in Story Mode when you stun the opponent in shmup mode as it leaves them open to it. 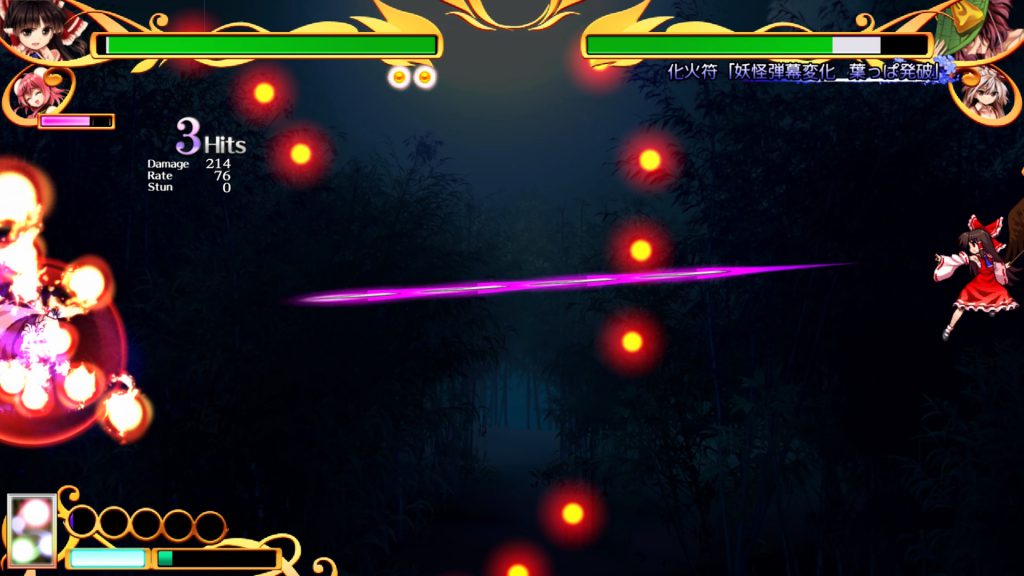 There’s something unique about the Story Mode that is used to emulate the Shoot’em Up feeling of the Touhou Series. After downing an enemy once, they activate some kind of shield and start to blast screen-filling attacks.
The blue shield represents a special guard state that reduces the damage by a lot and it’s not recommended to attack from close up as it has Hyper Armor (they don’t react to your attacks).
Your time has come when it turns into the vulnerable red shield. Put out enough damage and it’ll break and stuns the enemy, opening them up for some big damage like Special Spells.

You have 3 lives throughout the individual stories so make sure you keep yourself alive unless you want to see a potential quick game over at your final fight. No worries, you can go for a retry even if you run out of them. It’s just an extra challenge.

Gameplay Impression
So the question here is: Is it any good? From a gameplay point of view, I’m seeing a lot of potential fun that is nowhere else to be found. There’s a good variety of characters and playstyles and if you combine it with the Tag System you get some extra depth. The big issue is simply content and online. 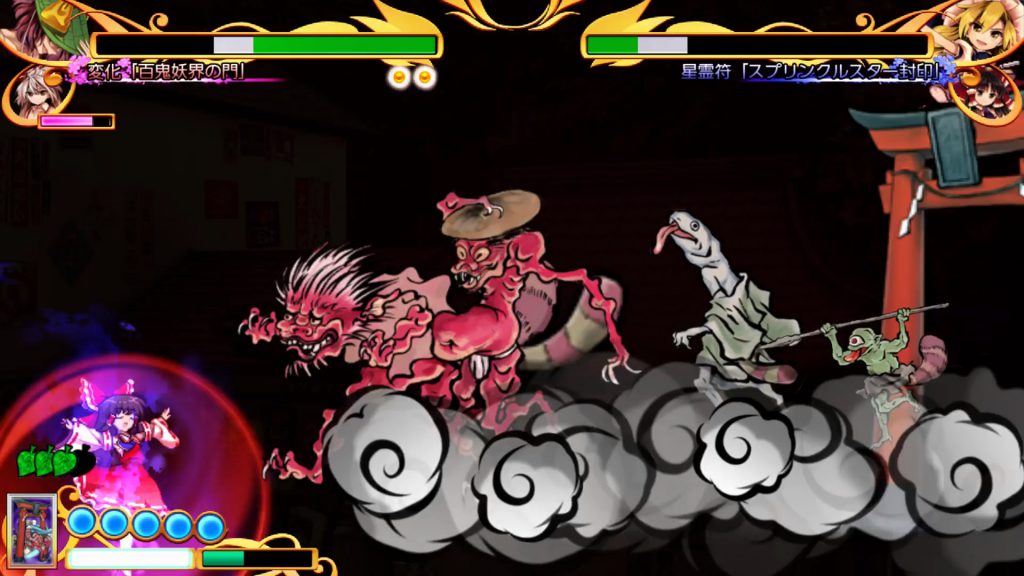 People who like 2D sprites will like this as it’s a combination of them and 3D effects. You can see that there’s a lot of care put into their animations. Some even utilize unique styles such as Japanese folklore like visuals and all kinds of whacky attacks.
The backgrounds are simpler with most of them being just 2D background drops with a few exceptions such as flying through the city or a concert that has a moving band in the background. It’s nothing special but you won’t have time to appreciate them anyway as the action requires all of your attention.

All characters have their stage and music but there’s something special about the latter. All of the music is done by different people/bands and all of them are pretty good. Don’t expect any voice acting though.

Touhou Hyouibana ~Antinomy of Common Flowers. does have something special going for it but several things drag it down such as content and less than stellar online play.
As we’re talking about the console version, we have to take the price of about 30€/35$ into account. Though it has good gameplay, I can’t recommend this game at this price point with good conscience when we’re talking about a Story Mode that lasts about 4 hours (or less).
When it comes to Gameplay I’d award it at least a Save but since we have to look at the whole package I’m going to give it a Save for Later.
If you are a Touhou Fan or have local people to play with on the same setup (or short distance Share Play) it might be a little more enticing proposition.