Hmm… you look different. Did you do something to your hair?

Right from opening up Undermine, you get a good impression as you see a seemingly endless amount of people standing in line, waiting for their turn to jump into a mine. While the mine part makes sense right off the bat given the title, the endless line of people jumping in will soon make sense. On your fist dive into this kingdom’s mine, dubbed Undermine, you’ll meet the Archmage Arkanos who sends you into the mine to find the source of the earthquakes that have been recently happening. You’ll also be asked to have an eye out for the blacksmith, Wayland, that has not returned from his trip down into Undermine.

Once you’re ready, you’ll be able to dive into the Undermine. Wielding only their trusty pickaxe and a sack on their back to carry the gold, your goal is to get as much gold as you can while getting as far as you can down into the mine. Your pickaxe will not only serve as a way to mine for the gold you see sticking out of rocks and the walls (so have an eye out), but also a weapon. The Undermine isn’t as empty as you’d think as most of the rooms you’ll be going into will host enemies that won’t hesitate in attacking you. You’ll mostly find yourself in close combat, swinging your pickaxe right up in the monster’s faces, as that does the most damage. Though, in situations where you can’t reach the enemy or the enemy sends out deadly projectile, you can throw your pickaxe at them for less damage. Your miner also has the ability to jump, which gives you a way to jump over gaps and is your way to dodge attacks. If you do end up falling into a gap, you’ll fall right down in front of the entrance you entered and suffer fall damage. Weirdly enough, the jumping here seems both floaty and not. It seems to be depending on the situation, but sometimes I found myself being totally fine with the jumping, to being frustrated as it starts to feel, well, floaty and messes with my lands. You’re also accompanied by a familiar, which will help you in their own way and has their own leveling system that makes them more helpful. You start out with a canary that helps you pick up gold, but you can unlock more later.

You’ll also be collecting various other items to help you out in your journey. You’ll find bombs which you can use in battle, but with how scarce they are, you may want to prioritize using them to blow up rocks blocking chests or blowing up a wall with a suspicious sparkling on it. Keys will let you open locked doors, pillars, and chests with chains on them. These are quite scarce as well, so it’s a good thing the minimap tells you what room it is before opening, though it’s best to wait and see what the other rooms hold just in case another doesn’t spawn in. Food also has a small chance of spawning, which will grant you more health, but cooking it by setting it on fire will increase the health recovery. Lastly, there are potions that you can pick up that can give you a temporary buff or do something like spawning a chest or healing you.

Aside from rooms containing enemies, there is also a shop that will appear on most floors where you can buy items; secret rooms that are hidden behind a (sparkling) wall; crawl spaces under rocks; weird rooms that will contain seemingly nothing until you solve something (like having all of the torches on fire will spawn a chest) or have you sacrifice health for a possible reward; blessing rooms which will let you select a blessing, but will curse you in the meantime (though, this isn’t unlocked until you rescue a specific character); relic rooms that will hold a random special item that will help you out a lot (or not depending on what you picked up previously). You can pick up relics that will let you walk on air (negating the fear of falling into pits), change how your bombs act, a chance at duplicating gold, or having your pickaxe ricochet off enemies when thrown. Relics won’t cause a run to become insanely broken, but there are some relics that synergize well together and will even combine into a whole new relic. 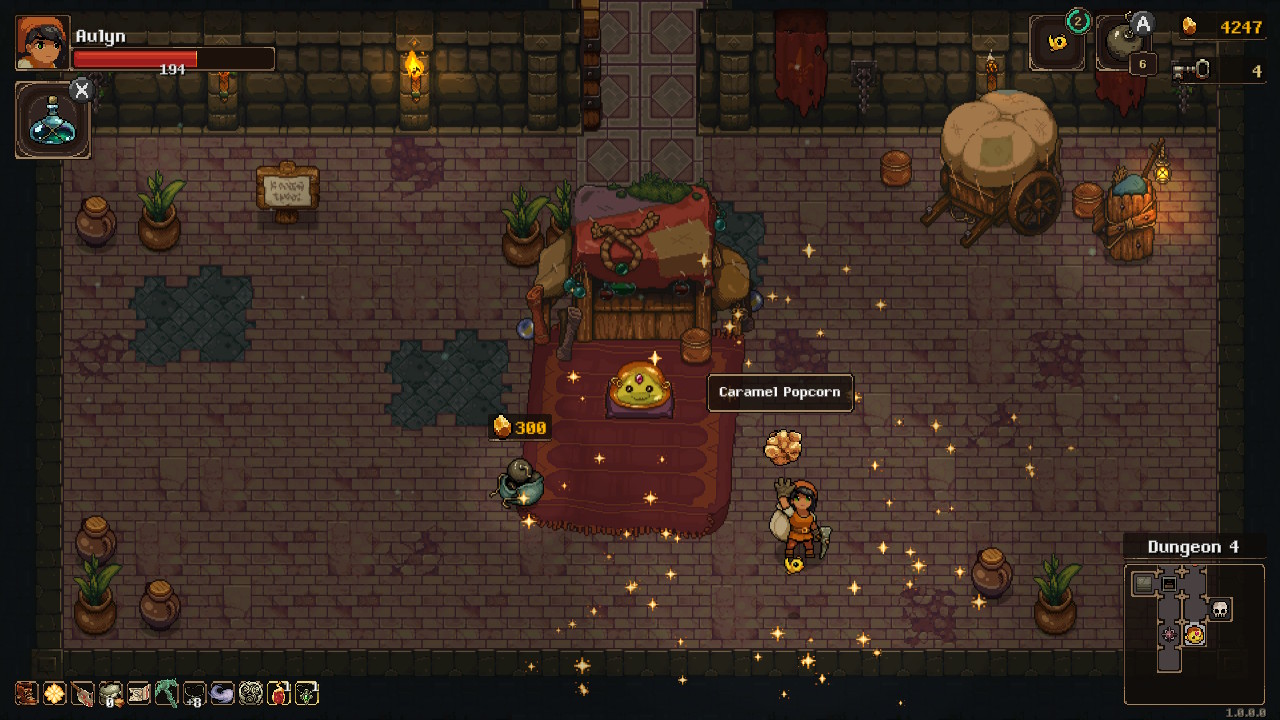 I can’t help but wish there was some kind of short invulnerability window when going into rooms though. There were many times where I found myself falling into a pit because I was jumping my way through empty rooms or falling into or a hazard running into me when coming in/out of a crawl space.

Each location of Undermine contains four floors, with the last floor containing a boss. These bosses are your main way of progressing and these guys are pretty hard to defeat as they’ll continuously hit you and have a lot of health for you to whittle down. The first boss, Selt, is definitely a spike in difficulty. These bosses have a pattern of attacking and it’s up to you to learn them, dodge, and find openings to attack. Though, it’s even harder if it’s a boss that can summon regular enemies to their aid. Once you do finally defeat them, they’ll drop a ton of gold, blueprints related to them, and a strange fragment artifact which Arkanos will have you gathering for a gate. Though, once they die, they won’t respawn on your next run. 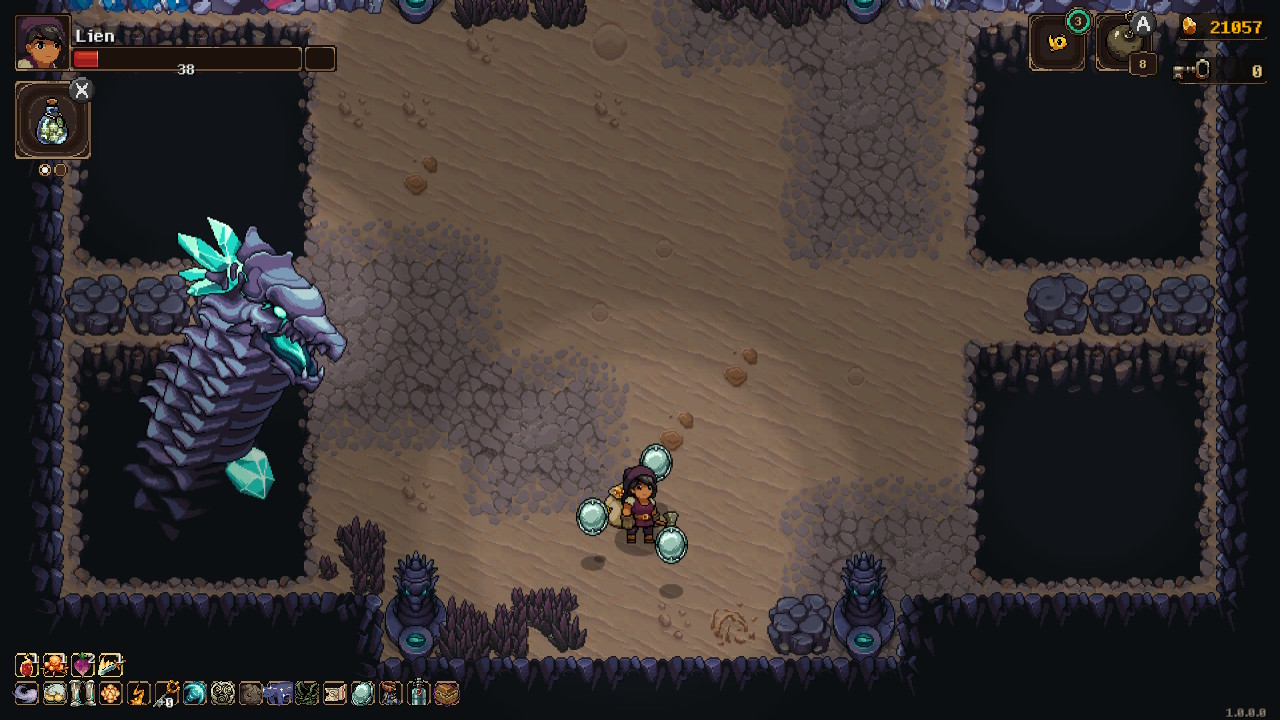 Though, if you don’t want to fight a boss right now, there is a way to skip them. It depends on what location you’re on, but it seems like it consists of either fighting or taking a loss (like a curse or paying in gold). Talking about, there is also a way to skip locations of the dungeon if you so wish, you just have to have a particular upgrade and have previously reached it (of course). Skipping locations will grant you some relics to help you out a bit.

These different locations of the dungeon will sport a whole new look, new enemies for you to fight against (which it seems some can spill out into the previous location), maybe having a trial to unlock something new, and some new environmental things. Like the first location is what you expect a mine will be like, but you’ll find yourself in abandoned, more dungeon-like areas where gold is instead held in statues or spawned in a crystallized form. As well as containers changing appearance to go with the location’s aesthetic.

Once you die, and you’ll die a lot trust me, you’ll drop all of your relics and most of your gold (well, at first). You’ll get the basic rundown of all you accomplished and how much gold stayed in your sack. However, once you return to the hub, the character you just started your run with has changed both in appearance and name. Well, it turns out, that rather than having some sort of explanation on how you get out of a dangerous situation or why you’re so important, you just play as multiple humble peasants. With each one inheriting whatever gold they left behind as well as any upgrades that were bought. 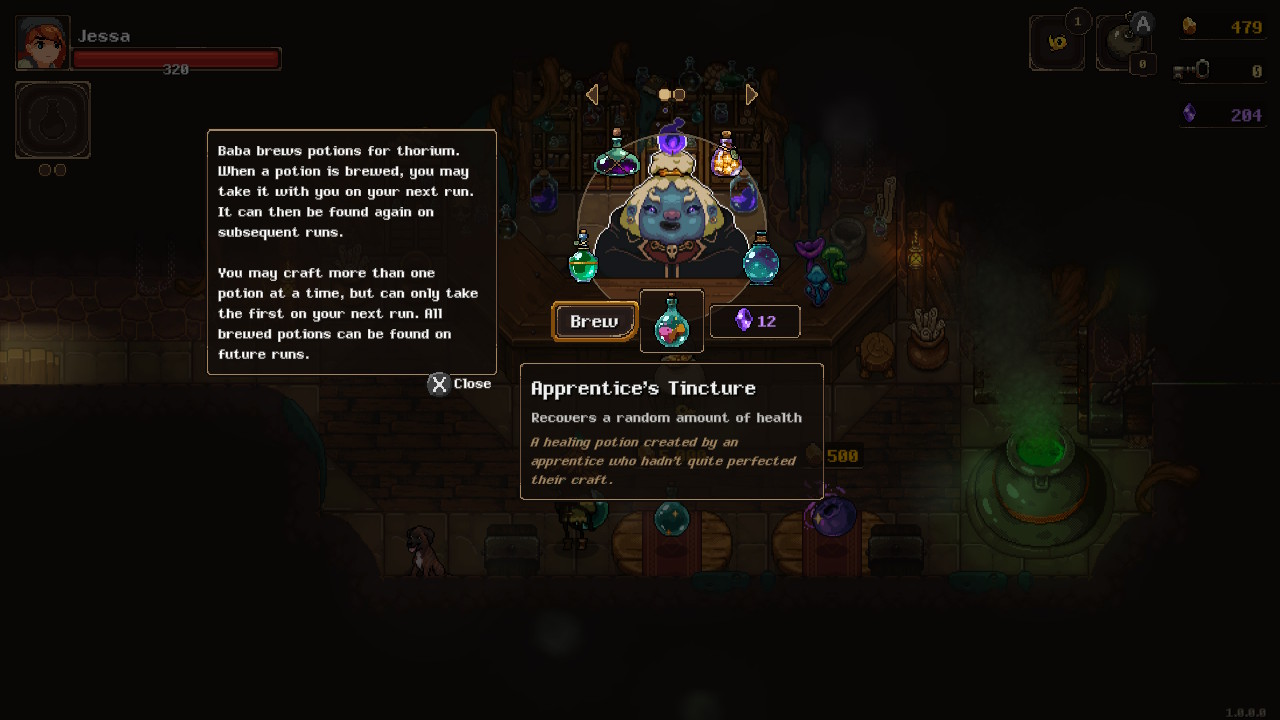 While rescuing the blacksmith is required to progress, there are other characters you’ll be rescuing or helping out that will populate your hub area and give you some help. In this hub area, it’s mainly used to get your current, and future, miners a better chance at delving deeper into the mine. Wayland is your guy to buy the basic, but most needed, upgrades so you can have more health, keep more gold, hit harder, and throw your pickaxe further. However, the upgrades get more expensive. Once you rescue or help more people, you’ll soon be able to buy bomb upgrades, upgrades so you can hold more potions or make the potion’s effects last longer, buy shop upgrades, buy items before diving in, and Arkanos will even sell items (and their upgrades) so you can start with a blessing, be able to see enemy health, pick up gold and items with a thrown pickaxe, or have food be more effective. 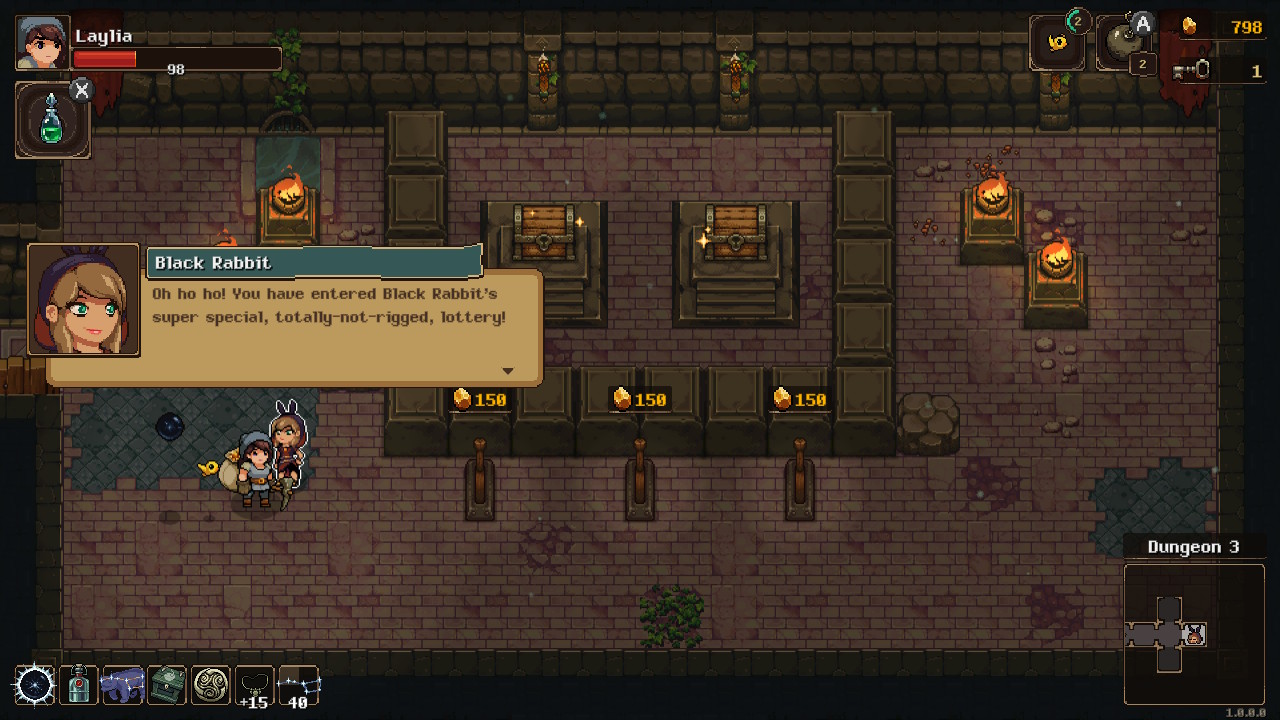 There are also schematics that you can find in certain chests on your runs, which you can take to the corresponding person that works in that area like potion recipes to the alchemist. While you do need thorium, which don’t spawn as much, you will start your next run with what you crafted (though only the first one you crafted). Not to mention, these aren’t in that item pool until you craft them. Giving you some control over your pool as you can just not make a specific relic or potion you think you won’t be getting much use out of or just don’t like the effect. You have a chance of finding relic, potion, or blessing schematics that you can craft as well as familiar eggs that you can hatch so you have more familiars to choose from.

And, well, it’s time to dive back into Undermine and try to gather more gold and hopefully get further in.

But how does it perform on the Switch, I hear you asking. Well, it’s good enough where I can recommend it to anyone that wants to bring Undermine on the go, but it isn’t without it’s problems. For the most part, Undermine plays great on handheld and there’s even some touch screen aspects as you can use it to easily get information on a held potion or relic (though you’ll have to go to your journal once you get a lot of relics). However, if there’s a lot going on screen (like a bunch of enemies that attack with projectiles, or just a lot of enemies when you get poisoned or caught on fire, or a lot of enemies and you have gold scatter) the game will lag for a second or two. Which, depending on the situation, will most likely cause you to be hit.

When I first started Undermine, I wasn’t really too sure about it. Though, once I played more, got used to the controls (and getting used to fighting mostly melee as I’m more of a ranged person), and got my first upgrades in, I warmed up to it. I sure do get frustrated with it sometimes (which to be honest, is with all rogue-lites/likes once you come across the new areas) like when I get the worst enemy spawns (rip my run with 3 Necromancers and 2 Blackguards spawning), but I did have fun playing and it felt good finally being able to get past a part I was stuck on as well as almost killing a boss in my first try (or even better, first try. Take that Noori). This also has a good “just one more run” aspect, though I do recommend taking breaks as I found myself doing worse if I didn’t and that means losing even more gold.

I’d say if you’re looking for something kind of like The Binding of Isaac, but not bullet hell-y, progression based on defeating bosses one time, grinding for gold, and your stats being based on the upgrades you’ll be aiming for, this won’t disappoint.