Odyssey to the West is an enjoyable story-driven title reminiscent of the adventure games of days past, and inspired by the legendary Journey to the West.

Originally released for consoles in 2010, ENSLAVED: Odyssey to the West is a game that, in many ways, was rather old-fashioned even at the time of its release. With a heavy emphasis on platforming, liberal use of locked camera angles, and even the aesthetic as a whole, the game feels very reminiscent of the action-adventure games of the Playstation 2 era. Players follow the journey of two unlikely companions through a post-apocalyptic New York city and beyond, and their relationship is the primary focus of the game.

The Premise:
Our story starts with Monkey; an abrasive loner and scavenger imprisoned aboard a slave ship headed to unknown regions. Through a dramatic series of events he encounters Trip; a young woman with excellent technological skills, but little of the experience required to survive in the harsh world she has found herself in. In order to survive, she takes drastic action, using her skills to enslave an incapacitated Monkey with a hacked slave headband. Upon waking, Monkey discovers he has to escort Trip safely back to her home, or suffer a painful death via the headband.

The Good:
Throughout their journey, they encounter numerous obstacles both figurative and literal, and begin to understand and respect each other’s abilities. This relationship is the core focus of the game from beginning to end, and both characters are written and portrayed wonderfully. Trip’s genuine attempts to be friendly and co-operative to the person she enslaved lend depth to her character, while Monkey’s attitude reflects similarly on him. The emotional hurdles and payoffs that present themselves throughout the game all landed perfectly for me, and I can confidently recommend the game solely on this.

The Bad:
The downside to this heavy focus on the core characters is that general world-building suffers. The only information to be had on the game’s post-apocalyptic world and savage mech enemies is what can be gleaned from observation, as there is little written or spoken exposition. While the plot’s overall direction makes sense, as it is driven by the main characters’ discoveries, many of the plot points themselves don’t. In particular, the game’s ending: the grand reveal comes out of nowhere, with seemingly no reference to anything else in the story. 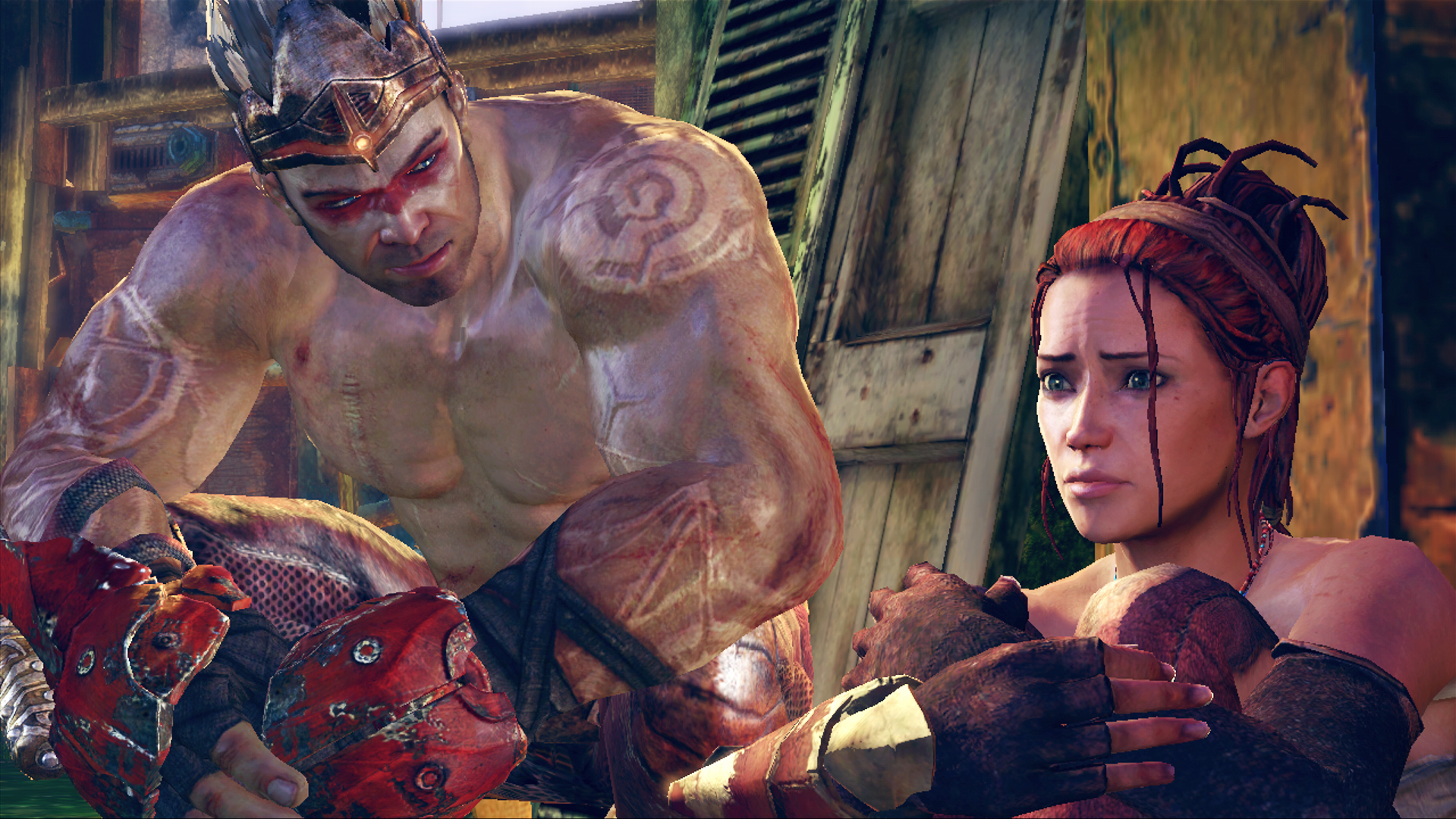 The Basics:
ENSLAVED assumes the form of a third person action-adventure with frequent platforming sections in which players must guide Monkey across ledges and beams, up the sides of buildings, and more. These can feature hazards such as temporary handholds and elements that will damage players with poor timing. I found the platforming to be fairly intuitive, if a bit rigid; the game exercises excessive hand-holding at times, preventing players from jumping from the “wrong” spot, even if it would clearly work just fine. This means it’s quite hard to fall, but easier to fail timed sections.

At several points, the player must assist Trip in traversing the terrain by carrying her or throwing her to ledges that are too high/far for her to reach alone, and in return, she will open paths and reveal hazards with her hacking skills. This symbiotic relationship being made tangible through gameplay plays a huge part in immersing the player in the two characters’ relationship, and it quickly became one of my favourite features. Additionally, upgrades to Monkey’s equipment and abilities are obtained through Trip, though this is done via a simple menu, rather than anything immersive. 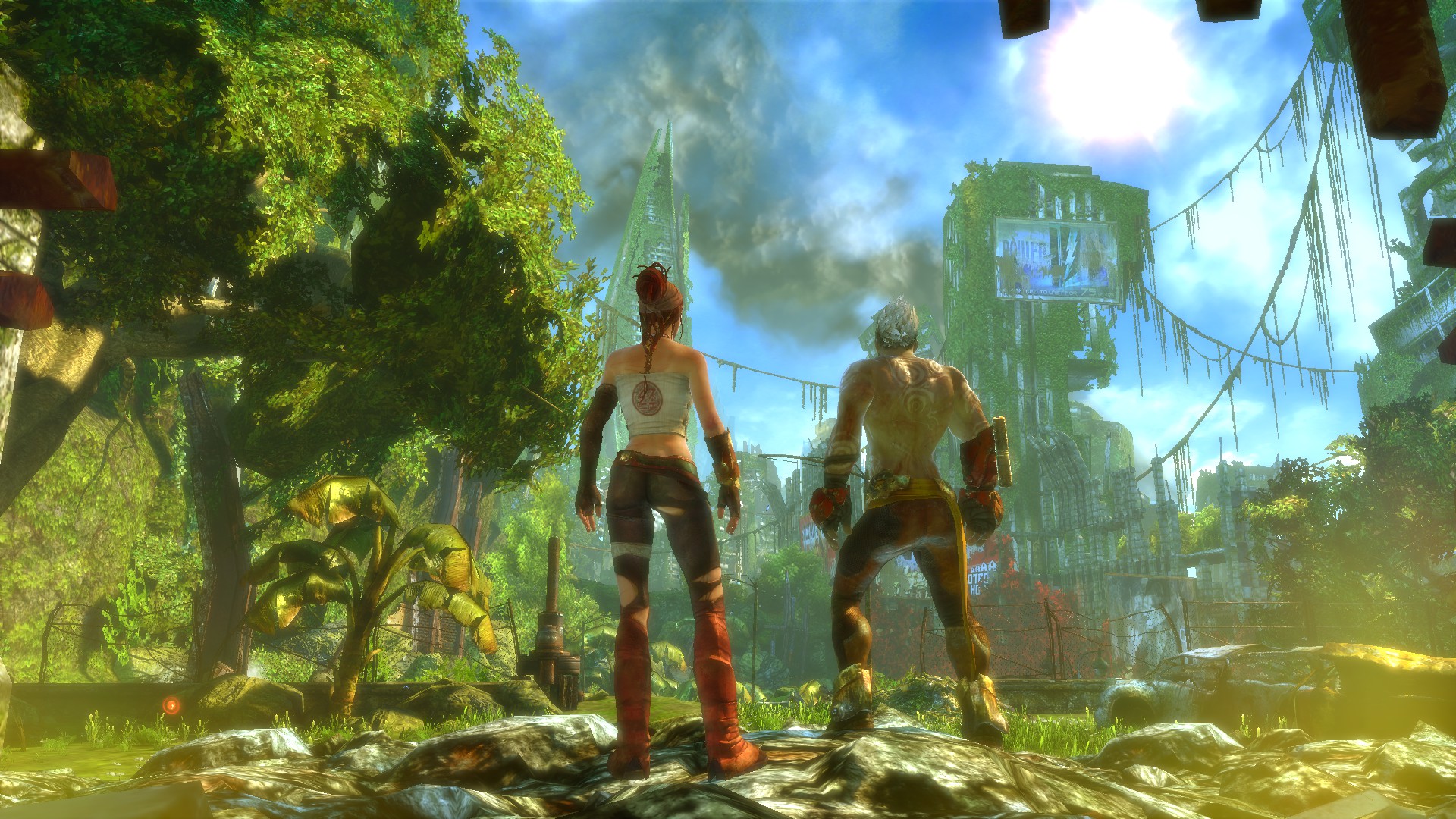 Combat:
For its many combat encounters, the game sees players employ Monkey’s staff to brutally break apart his robotic foes. Using the common recipe of light and heavy attacks plus the ability to block and dodge, the game’s melee combat is straightforward and relatively intuitive, and is supplemented by basic ranged attacks that can stun or damage. Enemies consist of various combat mechs of unknown origin, all of which are very hostile. With a number of melee and ranged variants to contend with, there’s plenty of room for players to make use of Monkey’s full arsenal and moveset. Enemies can, however, feel a bit too tanky on occasion, dragging out fights unnecessarily.

Additionally, the vicious robots assailing the protagonist are just that – robots with no character. Games often display the personality of their world’s inhabitants through ambient dialogue and/or sound effects, but not so in this instance. This contributes to the aforementioned lack of insight into the game’s world.

The developer clearly tried to integrate Trip into the combat experience by giving her a small selection of abilities that can be triggered by the player, such as a decoy to draw fire, and a heal that can be used when she is close by. Use of the decoy is essentially mandatory as sections of the game are built around it, but otherwise, her abilities don’t see much use, as she’s often too far away from them to be useful.

Overall, the game’s combat feels decent, but doesn’t do anything innovative.

World Design:
Getting Trip home involves making your way along a rather perilous series of paths through minefields, destroyed buildings and across towering structures. These are all designed to give the player the freedom to explore and make full use of Monkey’s platforming skills, while also allowing Trip to pass through with the player’s assistance. A cool but underused feature is Monkey’s “Cloud”; essentially a hoverboard, he can ride it over land and water at speed. It’s quite fun, but only a few short levels allow its use. 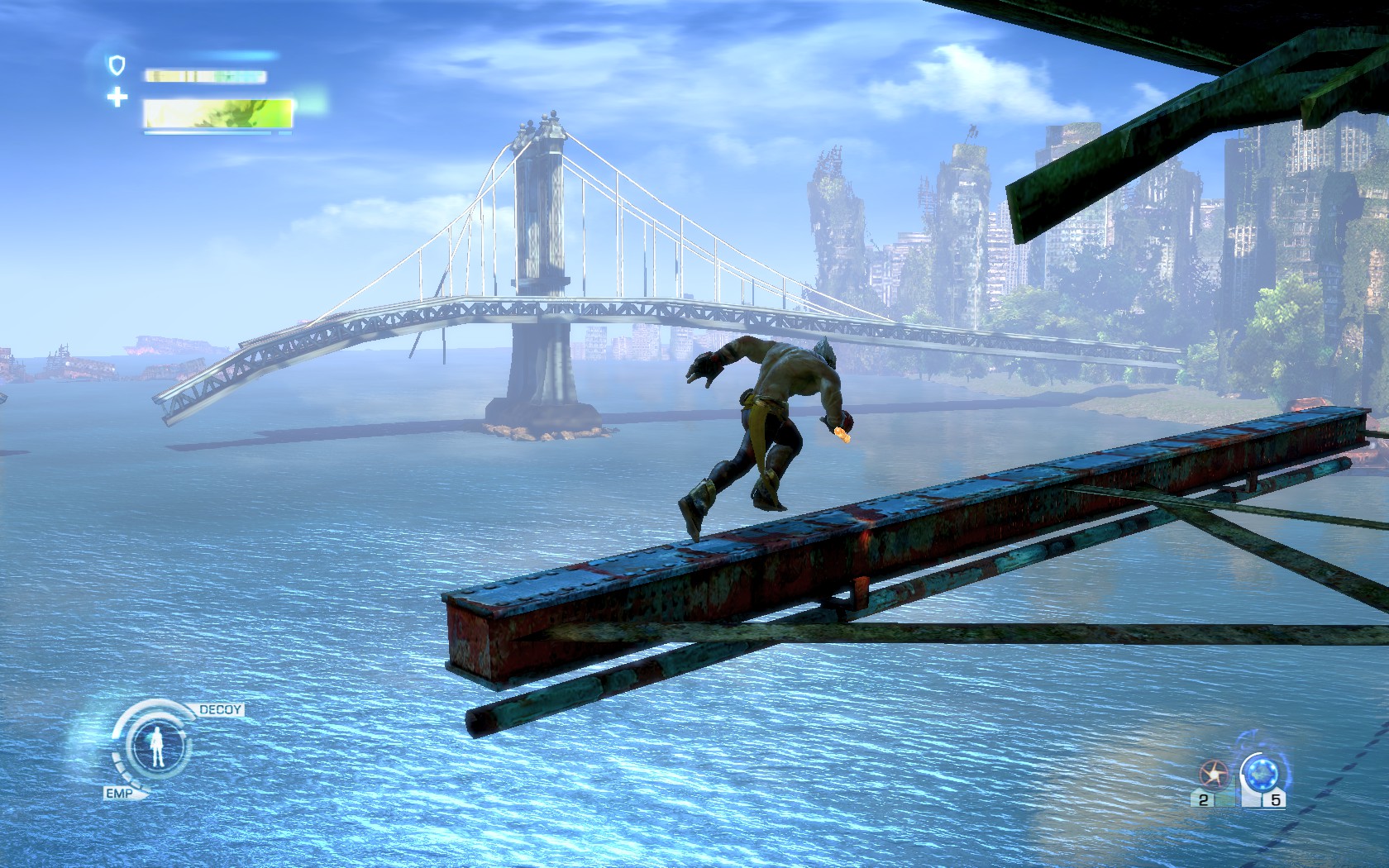 Visuals:
While definitely dated now, the game’s 2013 graphics are passable. There are some pretty views to be had, and the sense of scale is portrayed well in key moments.

Audio:
The voice acting is good, while the soundtrack and sound effects are okay, but forgettable.

Performance & Bugs:
As expected for an older title, the game runs at a consistent 60fps on the highest graphics settings.

The game suffers from a bug that causes shadows on characters to look rather ugly. This is apparently a problem with many Unreal Engine 3 games, and it can be fixed by tweaking values in a .ini file.

ENSLAVED: Odyssey to the West is a game with great character writing and decent gameplay, though some of its aspects did get left behind in the process of bringing Monkey and Trip to life. If, like me, you’ve been aware of this game for years and never got around to playing it, I highly recommend giving it a try.