REVIEW: Until You Fall

Until You Fall is rogue-lite VR game that has recently just released out of early access, where the full game is now available on the Oculus quest store and on Steam. It offers a unique combat system that you don’t often see when it comes to VR games, with in depth randomized elements to keep it fresh.

The combat revolves around duel wielding weapons, right off the bat you’re given a long sword in your main hand and a dagger in your offhand. It’s simple like you would think swing your weapon at enemies to deal damage, the faster or longer your swing all effects how much damage you will actually deal. Now anyone that has tried VR sword combat knows that sword fighting feels floaty or unsatisfying, but Until You Fall has a plan for that. After dealing enough damage to enemies they can either block or try and take a swing at you. So to block you line your weapons with the prompts on screen like you’re blocking each of the enemies attacks. And when the enemies are blocking, swinging in the right direction will guard break them causing them to stagger. In some fights it might require you to move left, right, or duck depending on which action the enemy is doing.

Now movement is thumb-stick controlled or even walking around in your environment, but instead you teleport to enemies. While this may seem like everyone’s least favorite option of movement in VR, in Until You Fall it works well. Teleporting to enemies cause you to dash at them, giving you an option of bonus damage. The are currently 12 weapons in the game and these consist of axes, swords, daggers, amulets, and katars. The beauty here is that different weapons tend to have quite a difference on the way you play. Whether you’re using a great sword that is considerably heavier than daggers thus you will swing slower, or beefing up your defense with a shield it all feels different.

Now a rogue-lite is only as fun as the variety of playstyle and upgrades it has to offer, and Until You Fall is no different in this category. With 10 augments available ranging from crit strike bonus, to +dash damage, and much more. More importantly one augment is called a ‘Trait Crystal’ that grants you access to game changing ways to build yourself. With over 35 different traits offered mixed with weapon choice and augments, making for no run feeling the same. Another way to flesh out your fighting style to your liking, is using aether to upgrade your weapons.

There are 4 difficulties to choose from in Until You Fall, while moving up in difficulty you are granted a bonus to aether gain making it feel rewarding to challenge yourself on the hardest modes. Moving up in difficulty will require you to react to blocks and dodge faster as you go up, while also increasing enemy damage and health. Overall, it’s about what you would expect from a difficulty option in a rogue-lite. You have to think faster and play better to even stand a change on nightmare difficulty. Not only is it going to be hard for you in game, but in real life as well. Long sessions of this game can be compared to Beat Saber in terms of physical movement. You will constantly be swinging your arms, ducking and dodging so be prepared for a workout.

I played on the Oculus quest version so keep in mind that the Steam version will have better textures and effects. But for an Oculus Quest game the visuals are quite stunning to say the least. While the textures might leave more to be desired, what is here is playable on Oculus mobile hardware which is impressive on it’s own. The worlds feel alien filled with bizarre plants and interesting enemy designs. If there is one thing that delivers on the visual front is that the world feels like somewhere you’ve never seen. 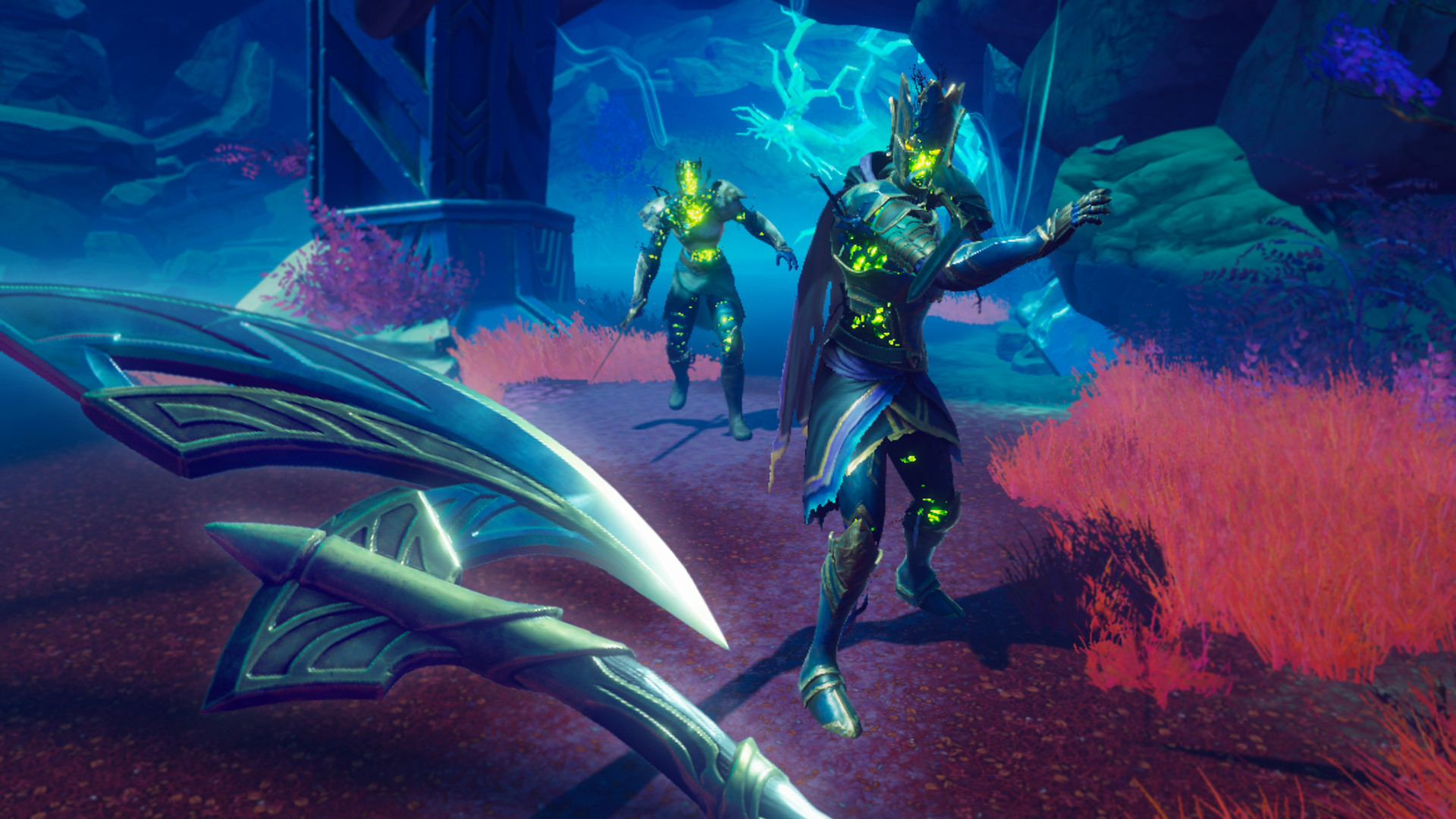 Sound is an important subject that is crucial to nailing especially in a VR experience. The sound track reminds me of a retro arcade game that does wonders in keeping the action intense. The sound effects of the prompts and combos are the most satisfying feature of this game. As you swing you will hear the combo sound pitch increase the higher your combo goes, this help makes the combat feel heavy or have a weight to the swords you are swinging.

Wire free VR Is The Future

The sole reason that anyone would want a game on the Oculus quest store is portability. When the quest 1 released the games were lacking, and the portability were not worth playing these low quality quest ports. But with the recent release of the quest 2 maybe things are different this time. With Walking Dead S&S, and now Until You Fall released out of early access the mobile library is growing in quality. Playing a VR game wireless is a feeling that everyone should experience, gone are the days of getting tangled in wires. Wireless certainly helps in games like Until You Fall that require large swings of the arm and lots of movement.

Anyone a fan of rogue-lites will be a fan of this game, it ticks all the boxes you could want in a rogue-lite but now its in virtual reality. I didn’t think this would be a genre I would want to play in VR, but Until You Fall has proven me wrong. A fun experience that can also act as a workout is just what I needed during this Covid pandemic.

Until you fall is a game to keep your eye on! SAVE this game on your wishlist or buy it at full price, it’s worth every penny.