High Strategy: Urukon is an abstract strategy game that combines the clarity of board games with the complexity of a grand strategy.

High Strategy: Urukon is an abstract strategy game where you play on a fixed map with fixed objectives, often claimed to be like a Paradox grand strategy game distilled to its essentials. I’ll get into that later.

I’ll say right away that you shouldn’t be misled by its simplistic appearance – under the minimalist interface lie many interlocking variables and ideas to juggle.

This is a game I’ll have to devote more time to later, but it’s a definite recommendation for fans of pure strategy games, without (most) RPG or history trappings. While there is some vague world building, this is a game about numbers. It’s a single-player board game. 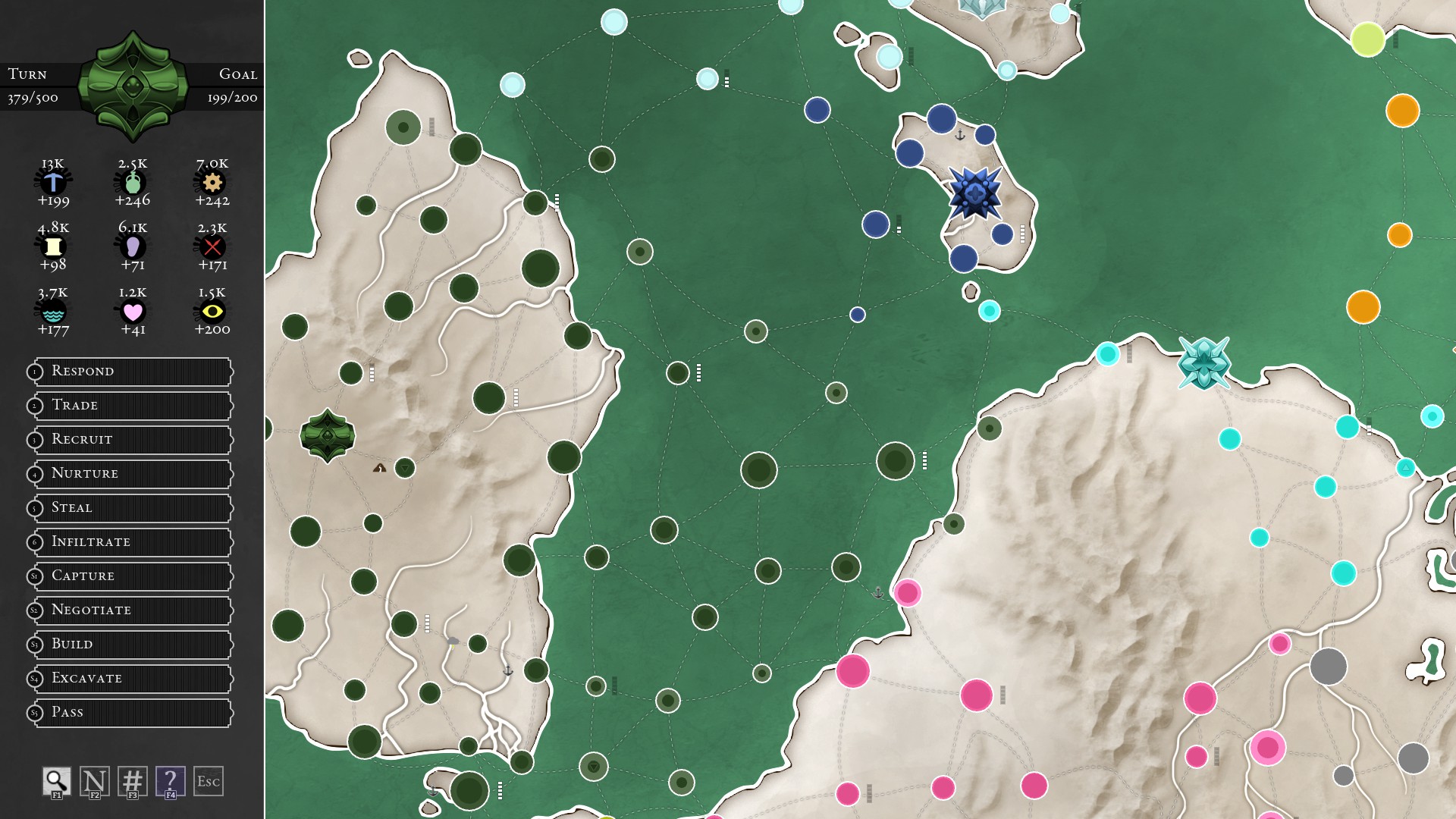 Not much to say, presentation wise. I like the minimalist look of the game quite a lot. The map looks great.

The music isn’t bad, but is really just a collection of tracks that get stale quickly. Nothing you can’t turn off once you dive deep into the game, so take it or leave it.

The biggest problem, in my opinion, is the interface. It’s quite cumbersome. Most of the information is buried inside menus 2 or 3 layers deep – this is annoying, mid game. And there are better solutions for this, too! For example, you can change the city nodes to display their yield of a specific resource – but you do this by opening a specific menu (one button) and then looking through a pretty big list to find the resource you want. But there’s a grid of resources on the screen at all time, so why not click the resource to change the map’s view?
There is practically no hovering information or tool-tips. Don’t get me wrong, the information is there – in the menus. But it’s too tedious too read (and understand) every menu entry in a row, and too cumbersome to use during the game.

The interface isn’t awful – I’ve seen much worse. I mean, the fact that all the information is there is already a big advantage over most games!
I just feel like it’s not a frictionless experience to use it and obstructs learning. 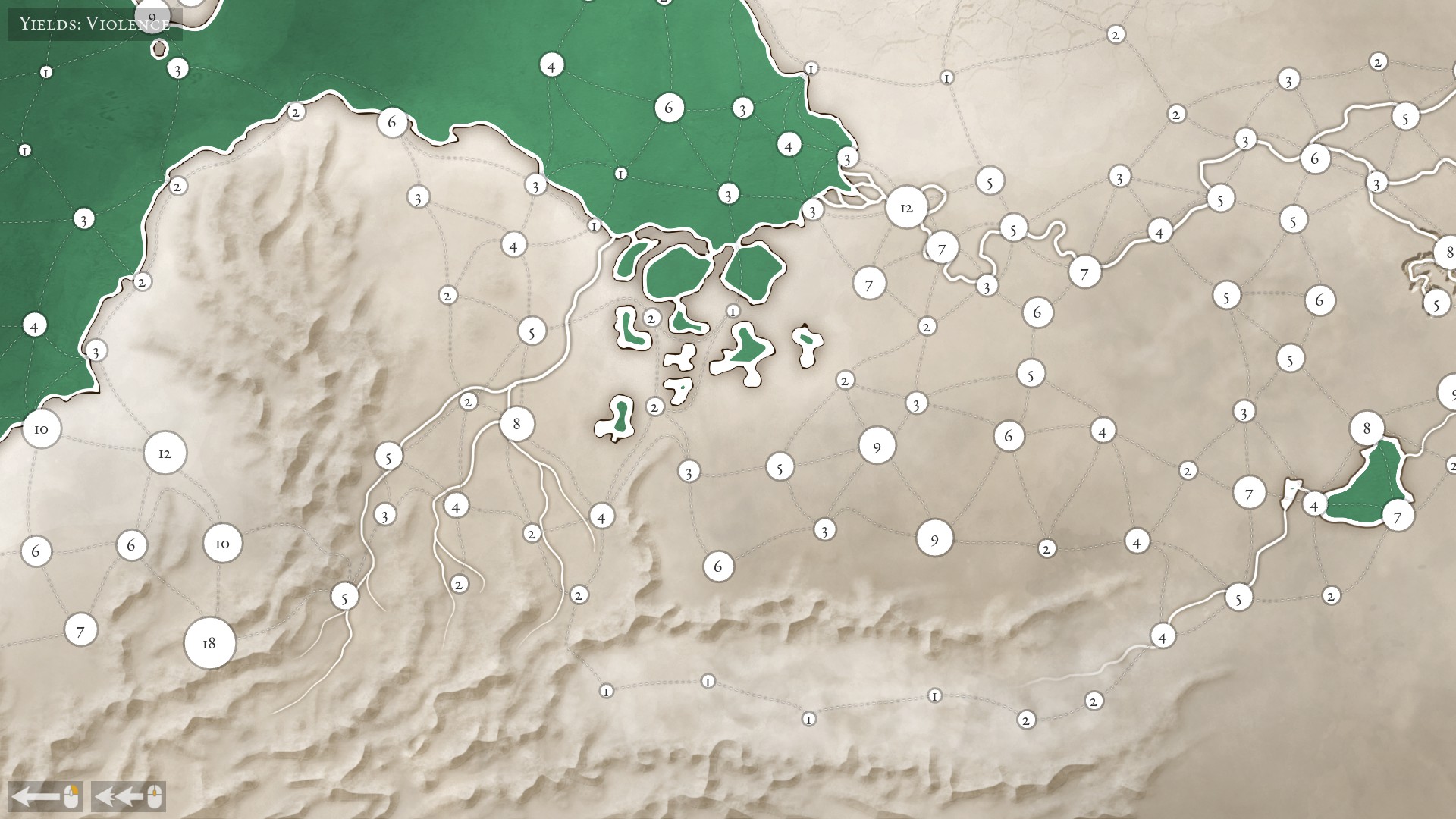 Listing the complete rules in a review is rather tedious (to writer and reader) so I’ll try to resume them to give you an idea of what the game is about, so that the following sections make sense.

As I said, the map is fixed, and so are the objectives. There are several factions with fixed capitals and cities in the starting map. As the game goes on, some of these may be destroyed, and some others may emerge. Each faction has its own specific objective (in three tiers), though the game doesn’t end when the AI factions complete their objective.

The most fundamental aspect of the game is that you (and every other faction) have a single action per turn. That’s it. And games end after 500 turns, which means that games take perhaps between 1 and 3 hours (perhaps longer for the hardest factions to play, shorter for the easier ones when you already know how to play).

This is not a complete description of how actions and resources interact, but it should give you an idea – it’s a complex game!

Objectives come in many varieties: achieving a certain number of population, controlling X cities, getting X resource per turn (dependent on the cities your control and your degree of control) and so on. Factions are ranked by their difficulty on the map, and you can also look at achievement percentages for an additional heuristic to decide which ones to tackle first.

The last point I want to mention is that knowing the map is *very* important. Knowing which cities provide which resources, which cities or regions are most coveted by certain factions, which landmarks will aid your objective, and so on.
This will be a very important point on the Complexity section but, for now, let’s talk about writing. 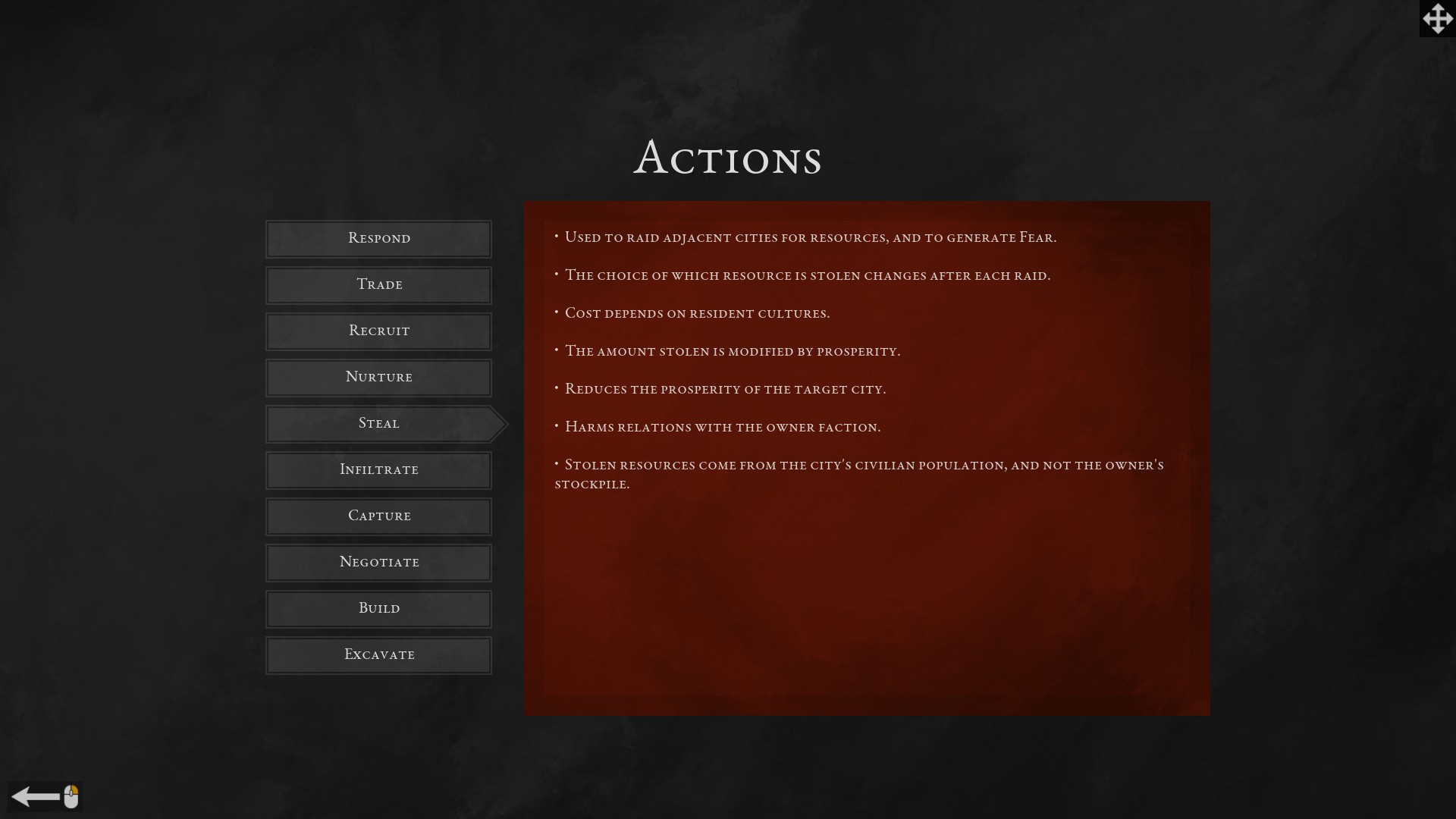 If you know Paradox Games, you know how central the writing is to those games. While no world building is necessary, given the historical nature of the game, events and personality traits are extremely important and one of the main draws of games like Crusader Kings. Since Urukon is often compared to such games, I think it deserves a section on the writing.

While Urukon does have lore, this is essentially irrelevant to the gameplay. Most of it is buried in the “how to play” menus, mostly in the descriptions of factions and cultures. This is a bit unfortunate, because I feel like the game would be much more compelling early on if the lore was more integrated with the game itself. While the lore may justify certain initial conditions and rules (faction relations, their home regions on the map, preferred resources and so on), it doesn’t really bring you into the world – you need to actively look for it.

One particularly criticism I have about this is how it hinders learning. While Paradox games have a huge barrier to entry in their complexity, having some basic knowledge of history and its dynamics can help you get started. You’ll at least have an idea of which resources are needed for what purposes and it’s a solid start for a role-playing session. In Urukon, no such luck! This makes the game substantially harder to get into, at first, at least until you’ve played a few hours to understand the little feedbacks and resource interactions.

That said, the game presents itself as an almost pure and abstract strategy game, so this isn’t a big problem! It’s good that the lore and story are there, but they play a very small role to the gameplay. 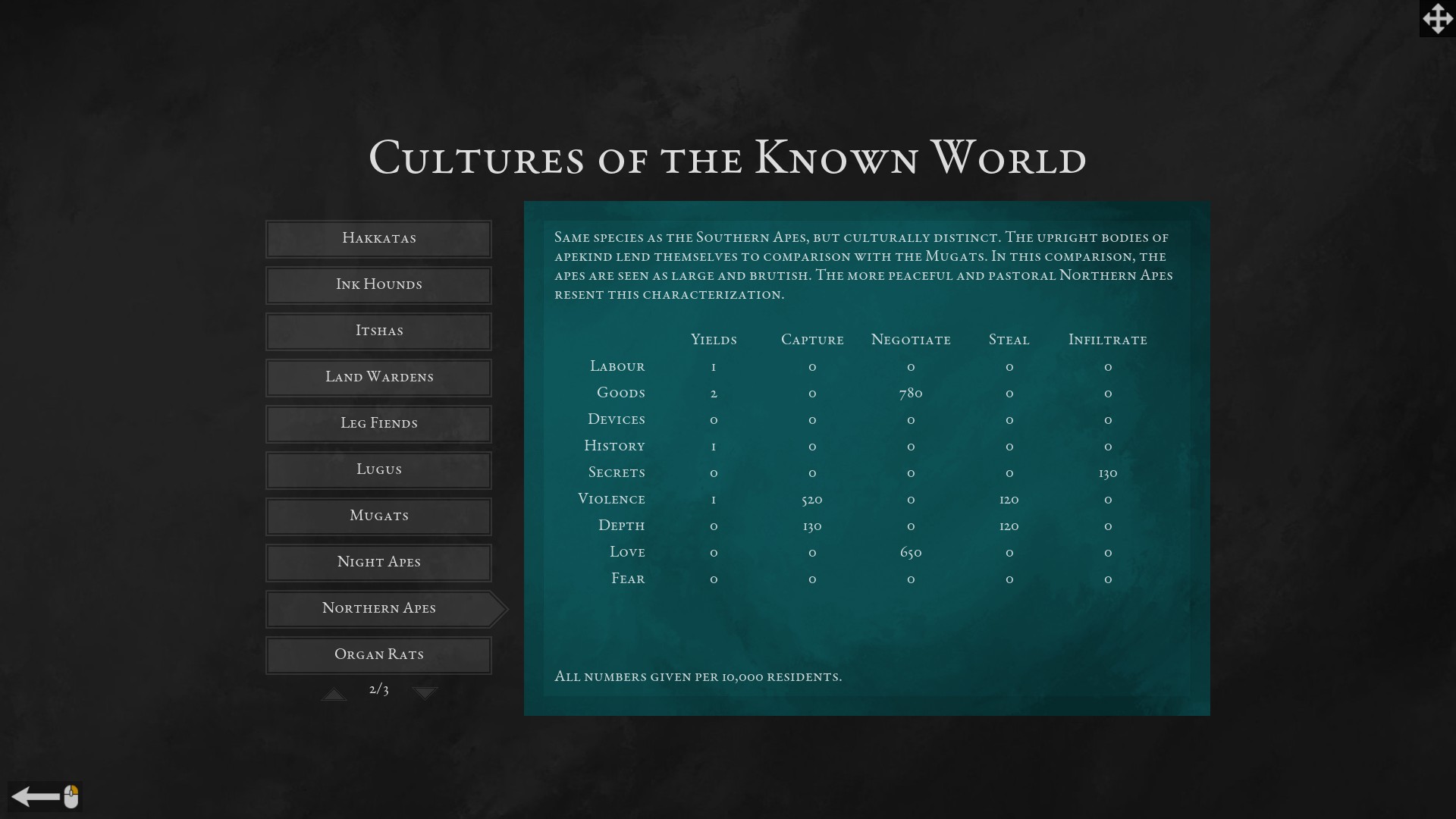 Ok, this is the most important section of the review.

First thing to note is that the game’s rules are clean. Every rule is visible and clearly described. In this sense, it’s much more transparent than Paradox Games, which look like a shuffled excel sheet for newcomers. That said, the number of rules and variables is still fairly high, which makes it quite difficult to understand, at first. You’ll have to accept some more or less random decisions when you first start playing, until the rules start making sense.

A second point, which contributes a lot to the game’s opaqueness, is the nature of the map. Each city has different resource yields, some have landmarks with special bonuses, demand and provide different resources through recruitment, trade and excavation. Plus, there are the cultural interactions and faction alignments.
All of these factors are really important, especially the former ones. My first good session, with one of the “Easy” factions, seemed absolutely impossible before I realized I had a landmark close by which contributed to my victory condition by a huge amount. This was a big realization, and made me look at the map very differently.
Summing up, learning the map is crucial. But this is not obvious, at first, and adds considerable opaqueness. It’s not chess where learning a handful of rules determines the gamespace. In Urukon, you must learn the board as well.
I do like the idea, however! I’ll have another point to add in the replayability section, but it’s an interesting element of the game.

Thirdly, I want to say something about actions and resources.
A feeling I often get from many strategy games is how they have many redundant systems and mechanics. Pax Nova comes to mind and the same happened in Endzone or Songs of Syx (all of which I’ve reviewed on this site, the latter 2 get a discount for being Early Access). Many games have intriguing systems and mechanics that simply end up making no difference (or very very little) to the general tactics and gameplay.
In Urukon, every single actions and resource matters. Sure, some resources may matter more than others for specific factions (and depending on your objective), but you’ll probably have to juggle with every one to accomplish the golden tier. I find this great! And, again, it makes this game deceptively complex. It looks simpler than a Paradox Game or a 4X, but don’t be fooled – its frugality in number of mechanics is compensated by the depth of interactions.

The whole point of this section is this – this is not as simple as it looks, nor as easy to get into. The game still has a rocky beginning, so don’t expect this to be a quick and easy gateway game into grand strategy. That said, it is a deep and interesting game. 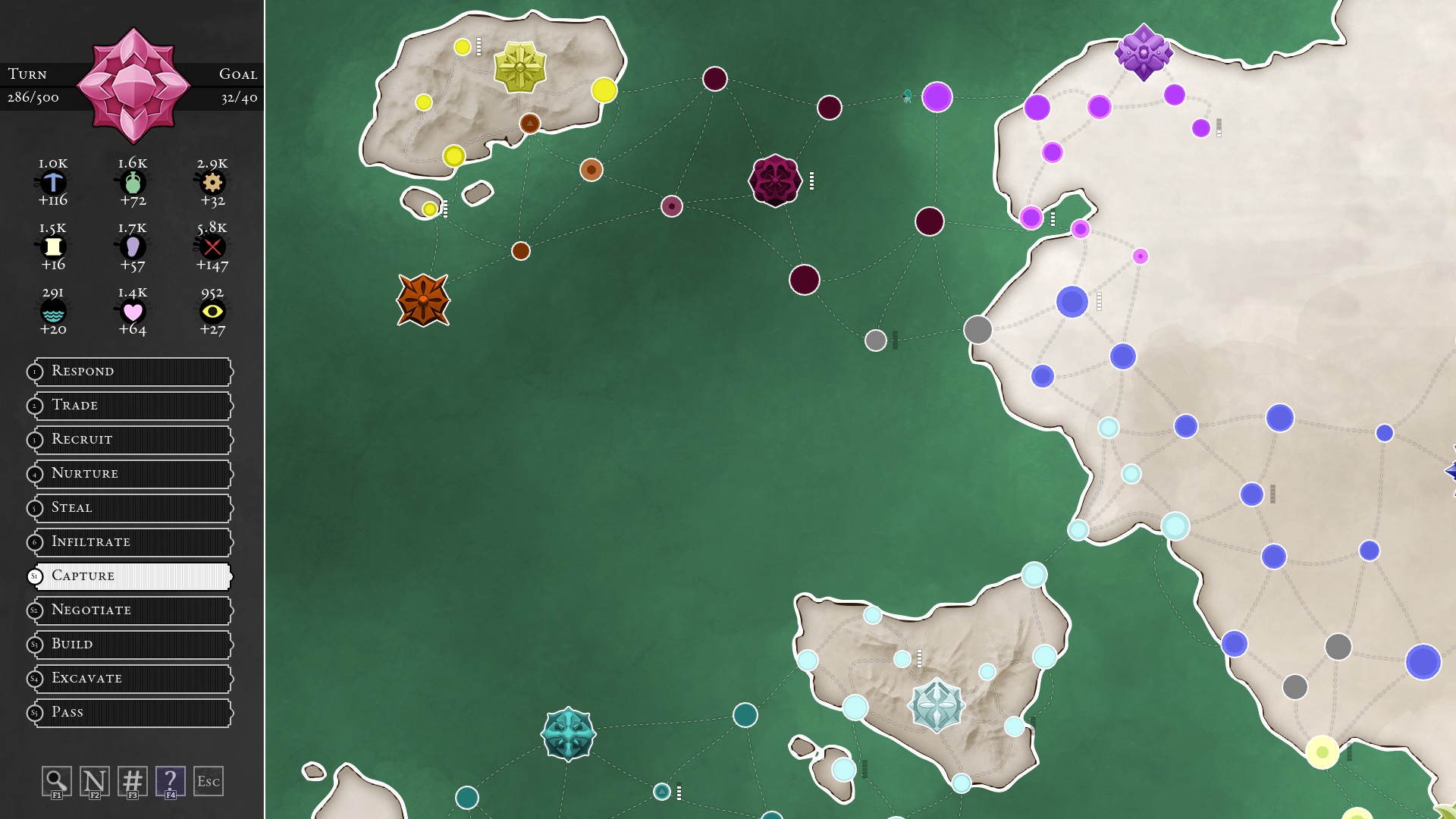 This obviously lacks the replayability of a Paradox game, since it lacks the role-playing and historical elements.
With that out of the way, the game seems to have a decent amount of content. Each session is fairly short, perhaps between 1 and 3 hours. This may seem short, but there are 32 factions in a different place in the map, with a very different objective, so this should make for a substantial amount of content.
Only two things make me somewhat reticent: first is the static map – and how, once you learn it, or a faction, you probably won’t replay it; second is how different are the factions are as you move up the chain and get a better hang of the mechanics – perhaps they share a common way to victory.

Either way, for what it is, the game seems very much worth the time and money. 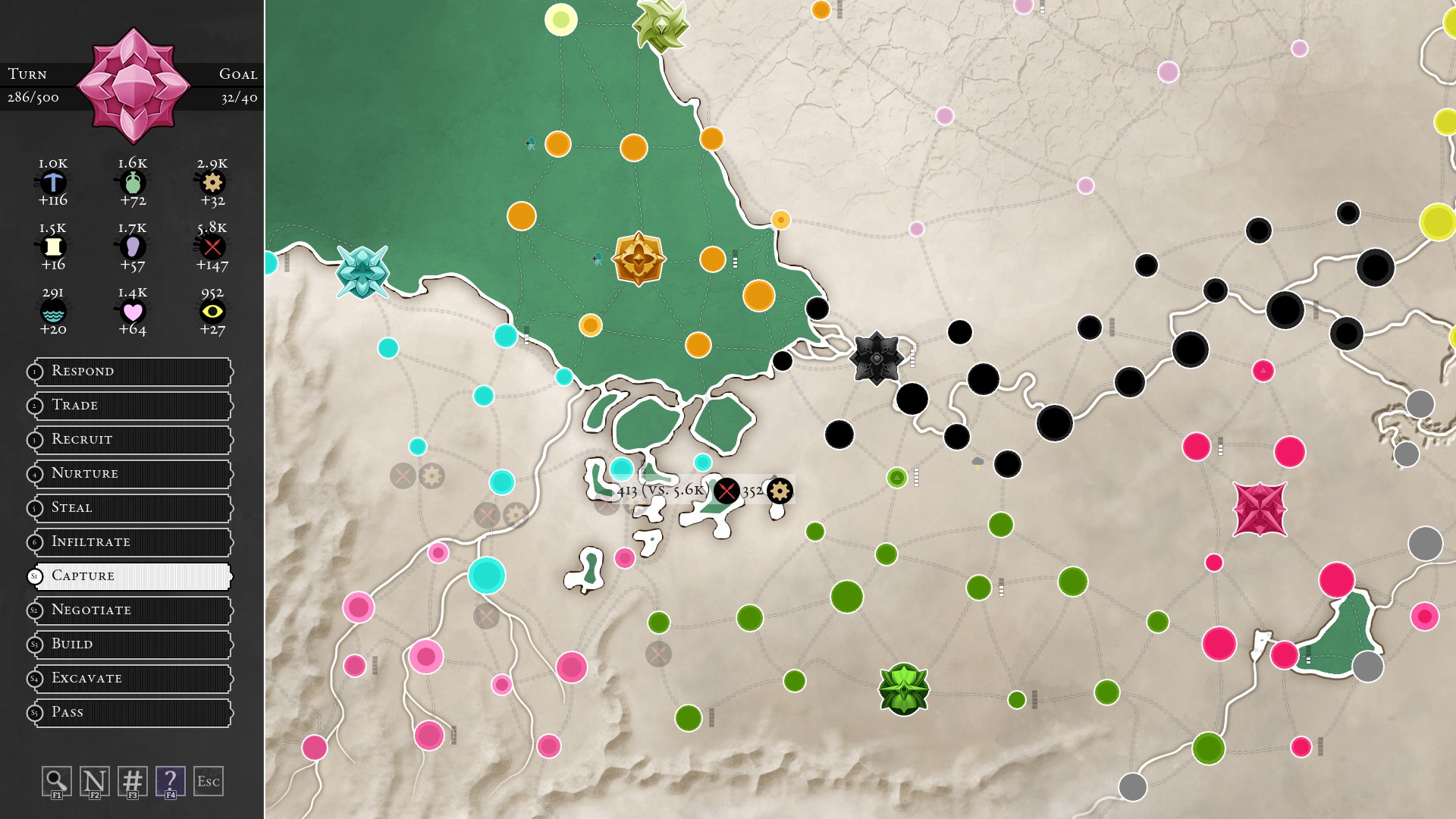 High Strategy: Urukon and a very original game, and surprisingly tight, mechanically – which is uncommon in the more original and experimental games!

Its clarity is refreshing, though learning the map is still a considerable hurdle at the beginning.

I’ve enjoyed my time with the game, and definitely look forward to playing more, but I unfortunately didn’t get the chance to go truly deep. For this reason, and the fact that the game has a rocky beginning, I’ll leave this as a “Save”. I very much doubt I’d lower my rating with more play – the only question is whether the late game keeps its depth to transcend into “Autosave”.

Either way, definitely try it out if you like strategy games. It couldn’t be easier to play (with a single action per turn) but will demand time and effort to master it. A fine strategy game.