The RPG your parents warned you about.

OSR is a term you hear thrown around a fare bit in the pen & paper RPG scene these days. It means “Old school revival”, and it’s usually applied to games that tries to capture the spirit, if not the mechanics, of the earliest RPGs, like the original Dungeons & Dragons. Mörk Borg (literally meaning Dark Castle) is one of these OSR games, but it’s OSR with a Doom Metal and Punk rock twist.

Dark is probably the best way to sum up Mörk Borg. It’s an incredibly, even ridiculously dark pen & paper RPG. The world is on the brink of destruction, the sun hardly shines anymore and the player characters are both dark and twisted parodies of the heroes you would see in other fantasy RPGs, and also very disposable. In fact the game is so dark that it becomes impossible to take it seriously, and that seems to be the intention of the writers. The game also loves to flirt with the things that conservative religious and parent groups in the 80’s thought RPGs were all about. Had this game been released 35 years ago, it would have caused controversy. 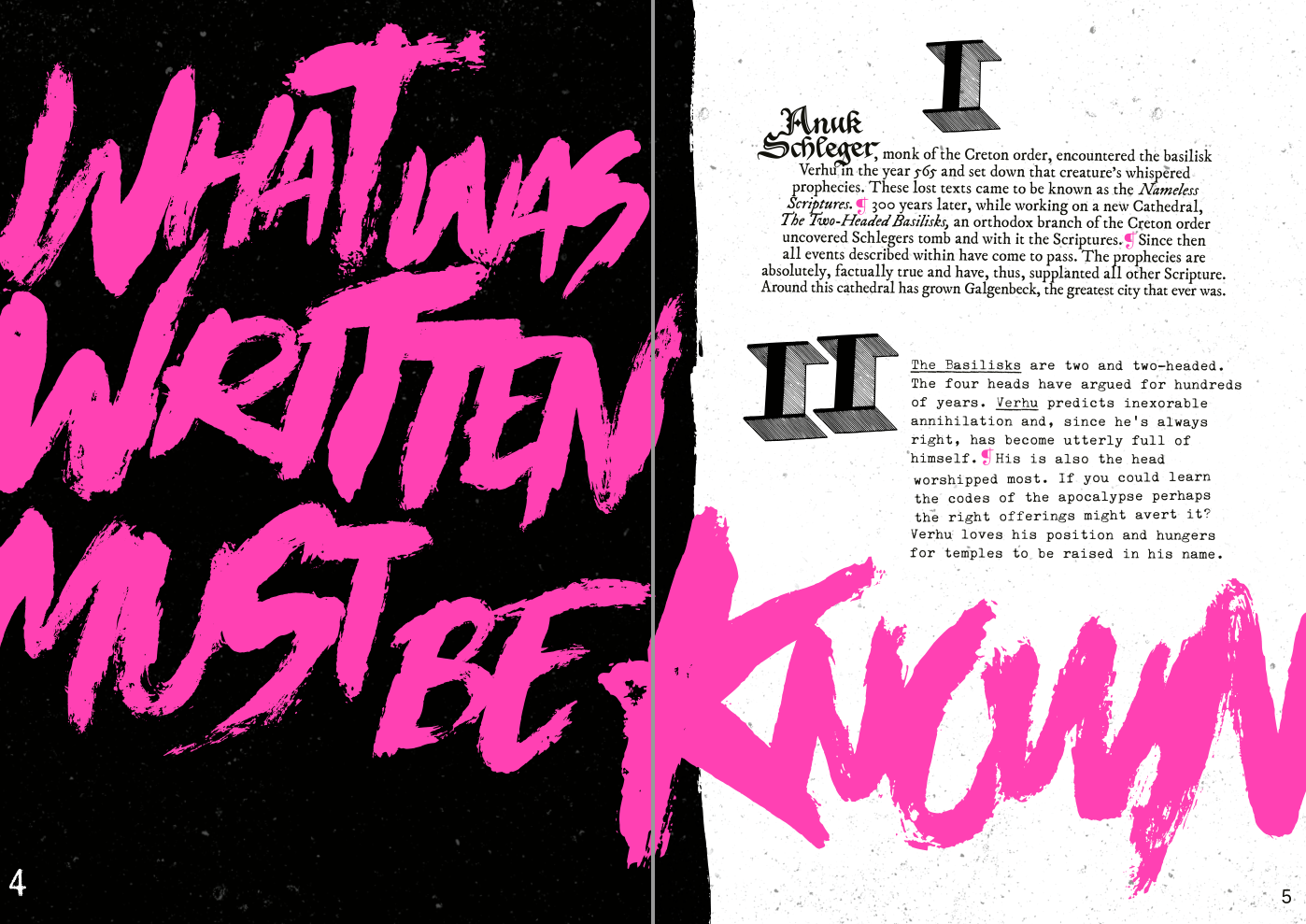 The world is dying. In fact, it’s just weeks away from taking its final breath. In the south the kingdom of Wästland is ruled by the mad king Fathmu IX, a paranoid man who’s iron fist is starving his own kingdom, in the west Countess Anthelia is draining the land of all its life. In the north the Shadow King and their sons being tended by innumerous slaves, who’s life they’ll snuff out if they so want to. And in the east the city state of Grift is crumbling, and from the earth itself vile creatures are crawling up.

These are the final days of a dying world. The prophecies are all turning out to be true. What was written down by the monk Anuk Schleger hundreds of years ago are all coming to pass. In this world people are trying to survive to their best of their ability. Without enough sunlight the crops wither and die, and with vile creatures as well as vile people roaming everywhere there’s no safe place to be. But still a few people survive.

The world itself can be described as pre-apocalyptic medieval fantasy, just before the apocalypse has fully happened. You’re not surviving the aftermath of some terrible events and finding remnants of fallen civilizations, the civilizations are falling around you.

As the world is ending bad things will start happening as the game progresses. There’s a table in the book that has a bunch of psalms and at the start of every day the GM rolls a die to see if they’ll read one of them. If a one comes up they then randomize a psalm. It’s up to the GM to decide exactly what happens, but they include verses such as “You shall know the last day is come. The sun shall set and never rise.”. Once 7 psalms have been read the world, and the game, ends.

The book does leave a lot of things unexplained. Every region gets a short description and it will be up to the GM to fill in all the blanks. For an experience GM this won’t be a problem, you can just borrow from other sources, fit in what things you think works and so on, but a newer GM might be stumped by the lack of information. 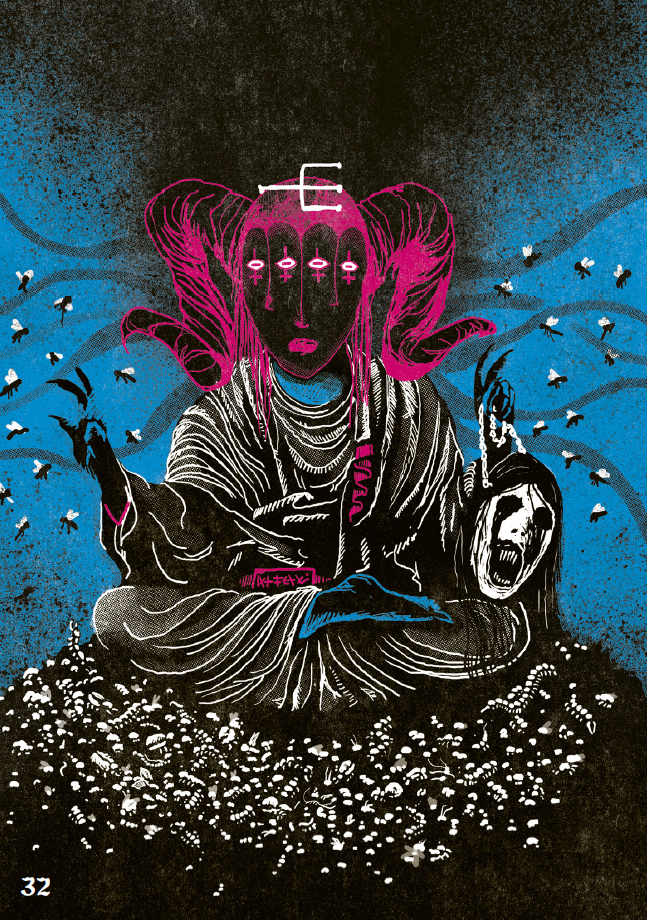 Mörk Borg is almost an art piece on its own. Its cover has a bold yellow colour, with an evil looking goat skeleton creature that has an upside down cross on its forehead and that’s probably the most conventional part of the book, apart from maybe the adventure at the end.

Almost every page in Mörk Borg has its own style with different fonts being used even on the same page. The general layout also changes from page to page, some have almost conventional RPG book layouts, others have huge pictures and text crammed into a corner, and some have text scattered in an almost haphazard way. This is of course very intentional and it gives the game a feel unlike any other RPG. It also has a colour palette that’s unlike anything else on the market, with a lot of yellow, pink and red being used. It really is a uniquely beautiful game and it’s worth getting just for its style alone.

This unique style does at times get in the way of readability though. With most pages having a bold colours, weird fonts, an almost chaotic layout or in some cases text that snakes around the edge of the book actually finding and reading the information you need can be harder than it maybe should have been. It’s not unreadable, and the game is very light on rules so it’s not too hard to learn and luckily they did not try to get fancy with the layout of the adventure at the end of the book.

In fact the adventure at the end of the book, which is a simple dungeon crawl, might have one of the most easy to read layouts of any RPG adventure. Instead of large text boxes all the relevant information is given in a short and concise form. It starts with the overall theme of the room, the first thing the players will notice, then in list form it gives all the major things they need to know, with a short description of each. It makes it easy for the GM to know what they need to tell the players and don’t slow down the game. Other adventure writers could learn a lot from how Mörk Borg handles this. 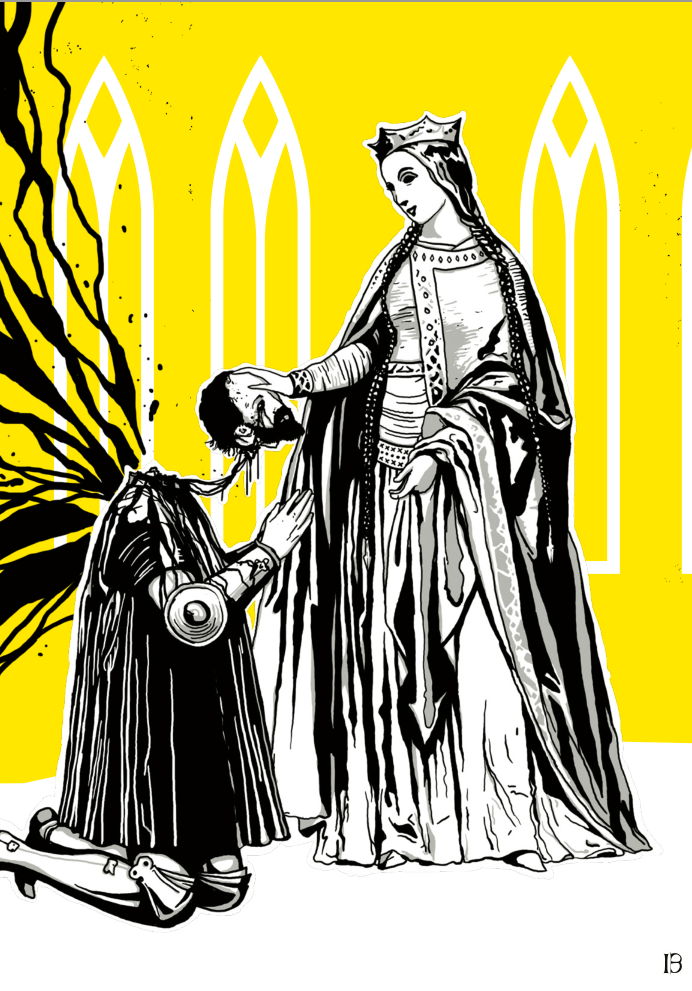 The rules in Mörk Borg are surprisingly light and easy to understand. Much like Dungeons & Dragons the rules are based around the 20-sided die. When you’re trying to do something you roll it, add your relevant modifiers and you need to roll over 12. The modifiers will for the most part come from one of the four stats, Agility, Presence, Strength and Toughness, and these are written as a simple +/- X, with 0 being the most common value. If your strength is +1 and you need to swing your sword at a troll, you roll 1d20+1 and if the result is 12 or more, you hit.

Character creation is very random. Your characters are not equal, and this is by design. You roll your stats with 3D6 and compare the result to a table, with some classes getting a bonus or penalty to the roll. If you get a 9-12, which is what you’ll most often roll, your stat is 0. Health is also rolled, with a single die depending on class, as well your starting gear, any spells and also any special abilities (each class has 6 different ones). Characters can in other words be very unbalanced compared to each other and this is by design. The random health also tend to make them likely to be frail. With how easy it is to roll up a new character if one dies they end up feeling disposable.

Combat in Mörk Borg is player facing and the GM hardly needs to roll any dice. The players roll for their attacks, and when they’re being attacked they also roll for their defense. The GM just calls for the rolls. This has two interesting effects on the game, the first is that the players are likely to feel like they messed up when they get hit, they can’t blame the GM, and the second is that there’s no fudging of the dice rolls. In other RPGs GMs can usually decide to roll dice in a way that’s not directly visible to the players or modify the stats of whatever creature or trap they’re using in a way that shields the players from really bad dice rolls, but in Mörk Borg that’s not possible. If the players roll poorly it’s right there on the table for everyone to see.

There are a few things in the game that makes it slightly less unfriendly to the players. The big one are the so called “omens”. At the start of every day the players will roll a die to determine how many they have for that day, and these omens can be used to re-roll dice, prevent damage or make tests easier.

For the GM there’s also a bunch of tables at the end of the book that pretty much allows them to randomize an entire adventure. It’s a surprisingly robust way to make a dungeon crawling adventure, but if you want to make something else, you’ll still need to fill in a lot of blanks.

Mörk Borg is really unlike any other RPG I’ve ever encountered. It oozes style from every page and it’s an enjoyable book to just flip through. It does have a few minor drawbacks like it being a bit harder to read than necessary, and it’s absolutely not a game for an inexperienced GM, nor would it be a good introduction to RPGs. Its over the top dark tone might also not be for everyone, you need to be able to laugh at how silly it really is. The silliness is not due to poor writing or the authors thinking they were creating something really cool, it’s very much intentional and with instructions such as “Roll D20 or throw a knife at the page” it’s clear that they were in on the joke.

Mörk Borg is probably not a great adventure for a long campaign, but for adventures lasting at most a few sessions it’s not bad. Just make sure going in that all the players know that their characters are likely to be maimed or die and that everything in this game world is disposable. A total party kill is not out of the question, even against lesser foes and that’s fine if you don’t approach it as a campaign game.

My players seemed to enjoy the player facing combat and the omen system, but for some of them the randomness of the system, how a single bad die roll could really mess up your character, did come as a bit of a shock. They’re used to more modern RPG systems and this game does require a very different mindset to what people are used to. But if you’re willing to play an unforgiving game that lends itself well to one-shots and short adventures, Mörk Borg is really a spectacular game.