Shing! Is a 2D Beat’em Up like Zeus Begins or Streets of Rage 4 where you move 3 dimensional in 2D plane. You can either play solo and switch between characters in a jiffy like in Agents of Mayhem or in Local Multiplayer (Online Mode is in the works/Remote Play Together enabled) up to 4 players.
The biggest difference between your classic Beat’em Up and Shing! Is the attack controls are put on the right stick that you’ll use to execute different attacks. But is it an upgrade? 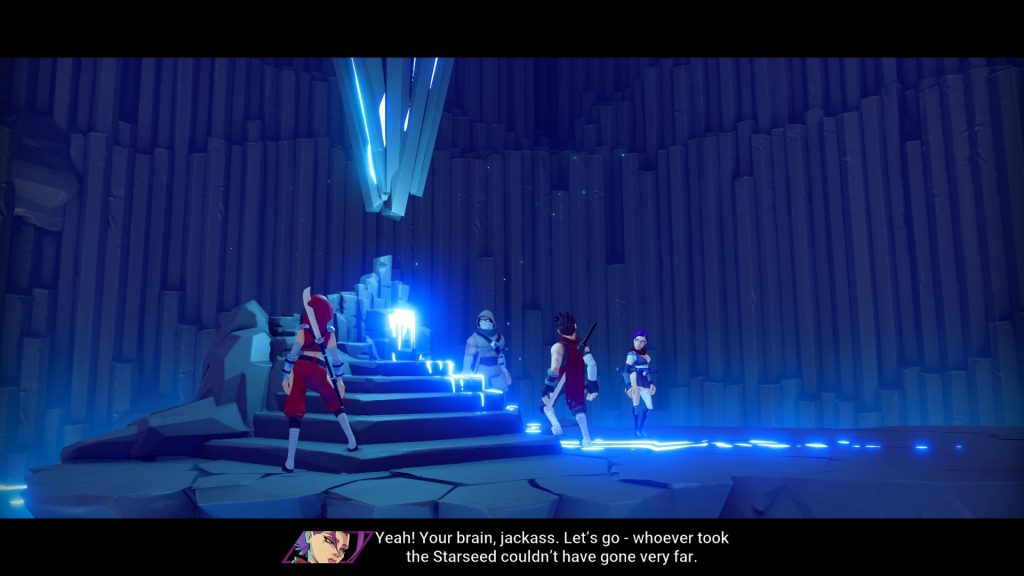 Beginning in a city inspired by ancient Asia, there’s a big modern city powered by a super generator called the Starseed. Tetsuo and Aiko, 2/4 of the main characters are tasked to protect it but for plot reasons, they are far away from the object they are supposed to protect. Soon both of them are meeting Bichiko and Big Willy that are joining their team in the effort to bring back the Starseed and reboot the technology.
Nope, this is not a plothole. Shing! Is a lighthearted action-comedy romp with short optional lore intermissions. These are important to add depth to the world of Shing! Like Big Willy’s origin and relationship status between the characters. Even if you miss them, they are going to be available to you in the main menu under the Lore Option.
All characters have clear cut archetypes: Lazy-ish, normal, super strict, and a powerful airhead. Surprisingly, it does a great job putting it together and they make a good combination with fun banter, including adult-ish jokes. 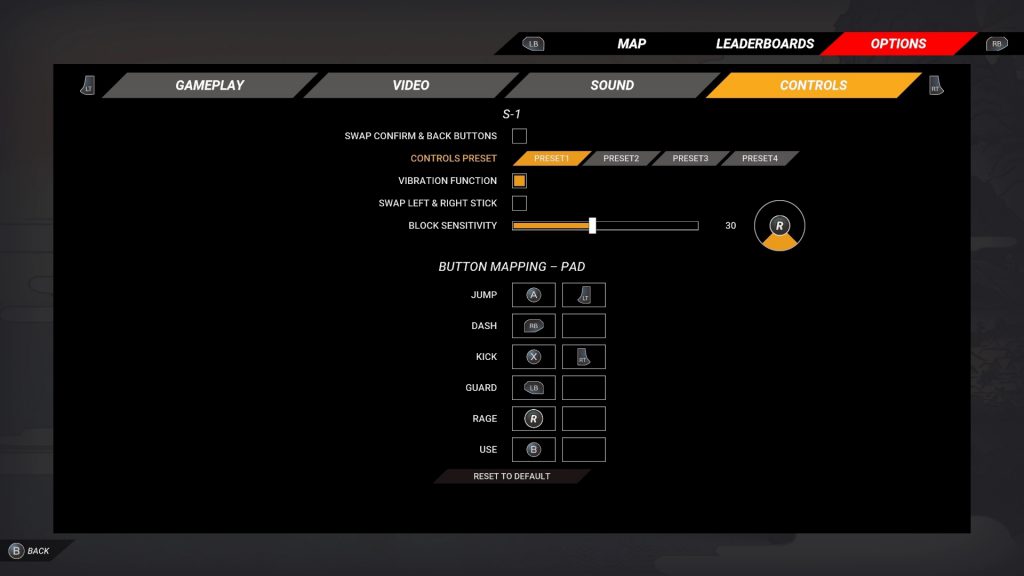 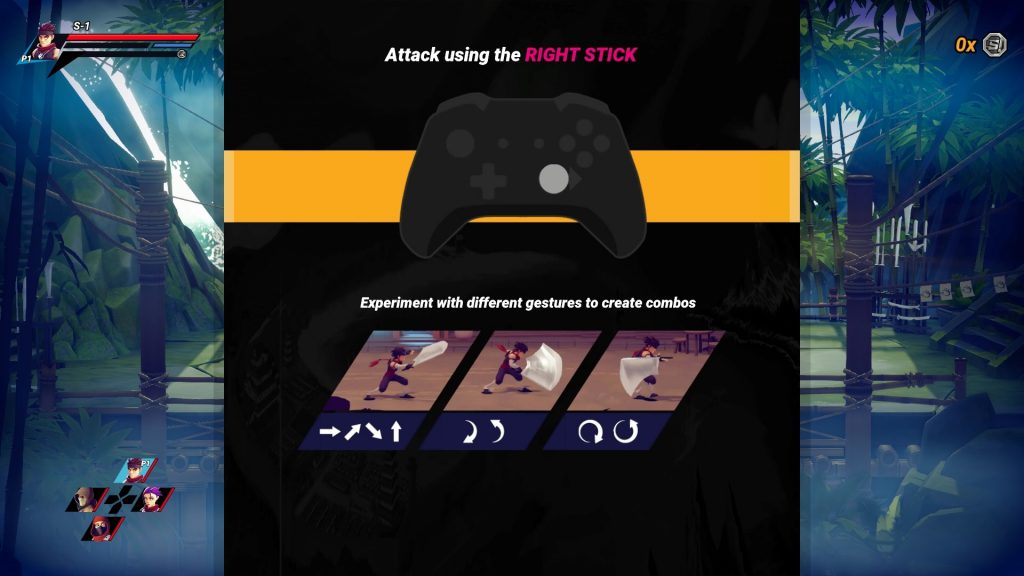 This is supposed to be the unique selling point of the game. By using the right stick you can execute different attacks and different directions. The idea to use the right stick for attacks isn’t necessarily new. PlayStation’s Rise to Honor on PS2 attempted to do that but in 3D space that leads to a battle system comparable to today’s Batman Arkham games.
Shing! On the other hand, attempts to use it as an execution substitute that requires you to go for individual motions to bring out the moves you wish to do. The most interesting one is the upwards one that activates the launcher and if you hold it you will move upwards as well to enable an air combo.

But is it that groundbreaking? Not at all. It’s just an alternative and the success is debatable. I found this type of attack controls harder to use because the required precision is too high for my liking that resulted in using many wrong attacks. What should have been an easy alternative turned out to be unreliable but that isn’t to say that applies to everybody else. As a hardboiled classic fighting game player, it didn’t manage to convince me. Not to mention that this control scheme forfeits the face buttons and is solely made to work in tandem with the shoulder buttons and triggers while the face buttons are simply duplicates just in case.

Gameplay Mechanics
That is not to say that the controls are the unique thing about it, which is why we need to look at the big picture.

Guarding
The standard guard that protects you from damage but gets broken up if it takes too much and leaves you vulnerable to follow up attacks. Some Attacks are guard breakers or some that are simply unblockable. This is an important distinction because you can Parry the first one. 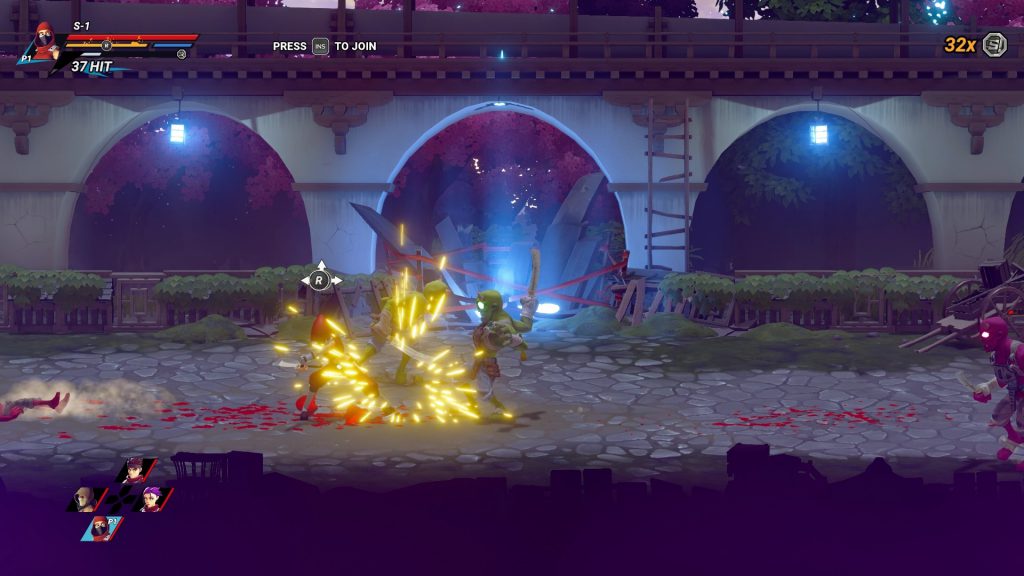 By pushing the block button just before the attack hits you, you activate the counter stance that opens up damaging follow-ups. Right/Left unleashes a horizontal attack and is useful to hit many enemies at once.

Dash
Your typical invincible dash that can be used on the ground or in the air. It’s very strong and can cancel mostly at any time mid-attack but there’s a short period of cooldown. This move is one of the safest defensive option in the game and can also be used to close the distance between you and the enemy. 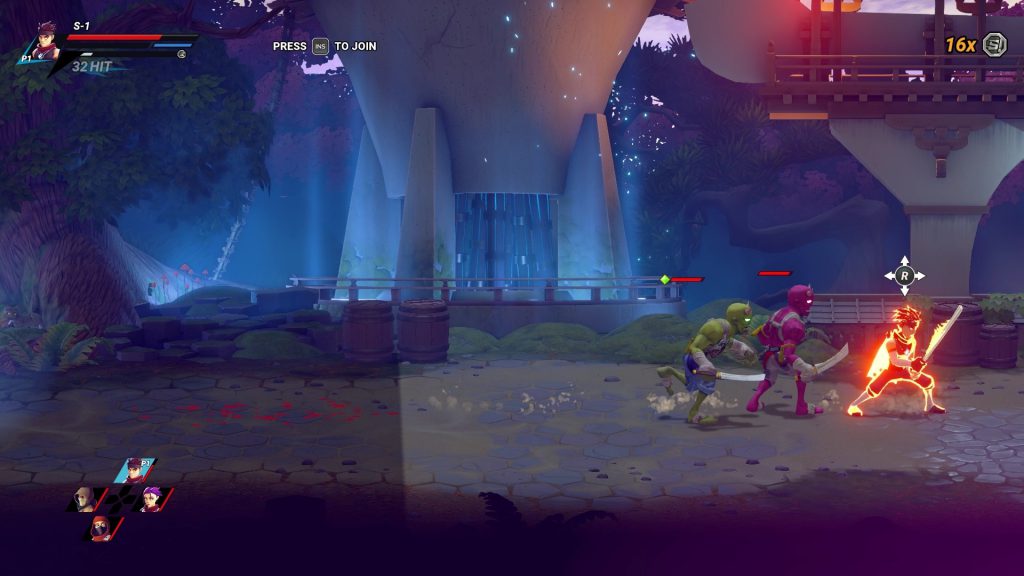 Attack without getting hit to fill up the Rage Gauge. Get hit and you’ll lose some. On activation, you’re at a special stance that opens up 3 different damaging follow-ups. Down is a downward strike useful against small or enemies lying on the ground. Up is an upward attack that is useful for airborne enemies. Right/Left unleashes a multi-hit combo ends with a strong hit that knocks and pushes the enemy away. Be careful though, you’re not invincible while you’re doing a Rage Attack but you can cancel it at any time with your dash. 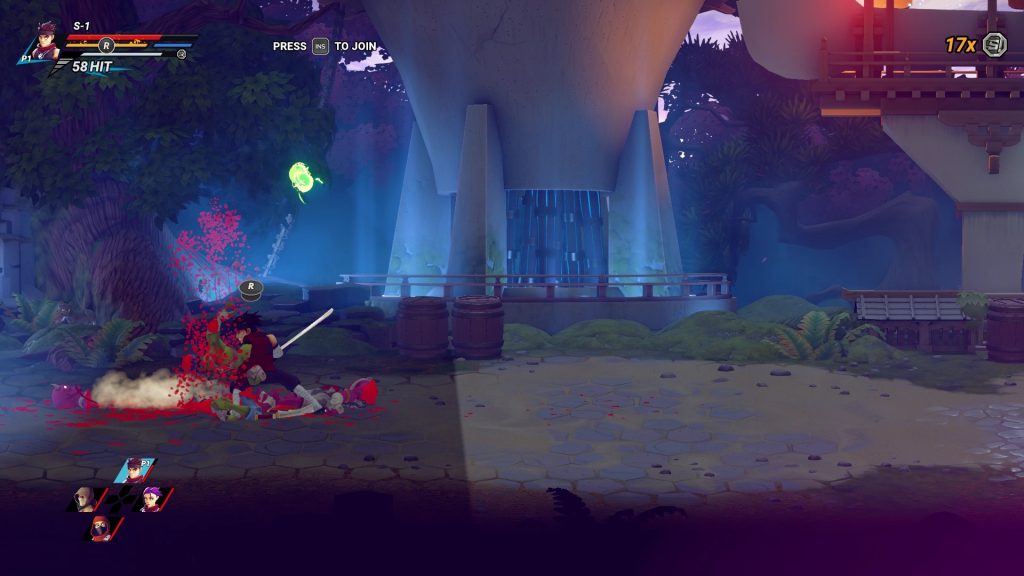 This is a strange one because you’re forced to use the powers you pick up. Fire buffs your attack damage and Lightning also buffs damage but also adds a projectile to each attack. These are depleted very fast and this makes them very situational. Yellow Orbs give you bombs that are put down once you use the dash which means if you want to stock up these bombs you have to deliberately not use it. There are other things such as Life Recovery and protective armor but the offense ones, in particular, are far too rigid. This means that they are put into situations as a specific solution rather than an option you’re free to utilize. For Shooter fans, this is comparable to a 2 weapon setup vs. a complete weapon wheel. 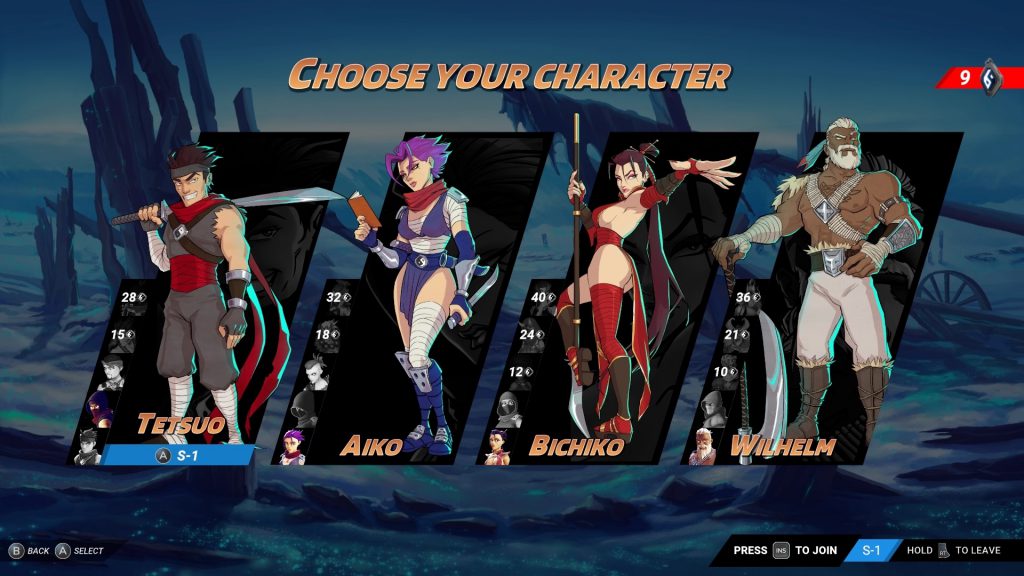 All 4 characters have their Life Bar which means you have at least 4 lives and they can be switched nearly at any time without any repercussions. Now here’s an important observation. All characters are very similar to each other, this has the advantage that all players are on a level playing field but suffers from a lack of individuality. There are slight differences but the basics are the same. 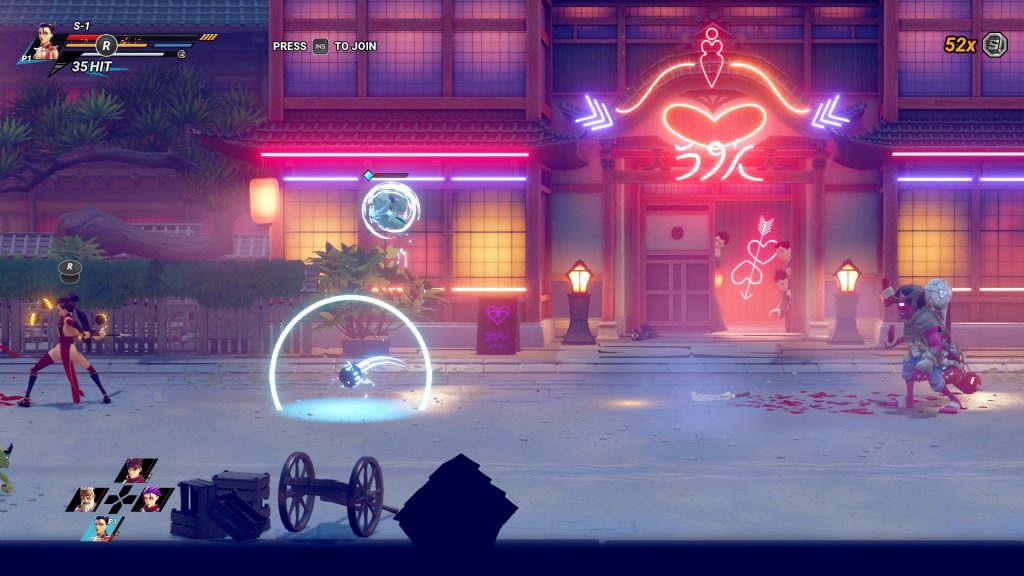 This one is a little bit tougher to describe. Unlike many other Beat’em Ups, the enemies are rather strong. They have a lot of health and very strong individual traits that will push you to the limit, especially when they come in a mix of a deadly package. To put an example here, there are enemies with barriers and you have to either reflect their projectiles with a parry or shoot them with lightning or use bombs (both are situational) to make them vulnerable. The shields also have a hitbox so pray to god that you don’t get hit and wake up into one of them. What makes these shield enemies annoying is the fact that the shields have unconditional regeneration and ignore anything that’s happening to the enemy and recovery 100% unless they are dead.
Then there are bombing enemies that like to move backward and drop bombs to escape your approach. There are a lot more of these types of enemies. Many of them discourage offense and therefore disrupt the pacing.
Where does this put Shing! ? The closest comparison I can find is… Knack. Each encounter is a relatively rigid puzzle with a close to optimal path but it’s reactive rather than full-on freestyle due to the many restrictions imbued into the enemies. 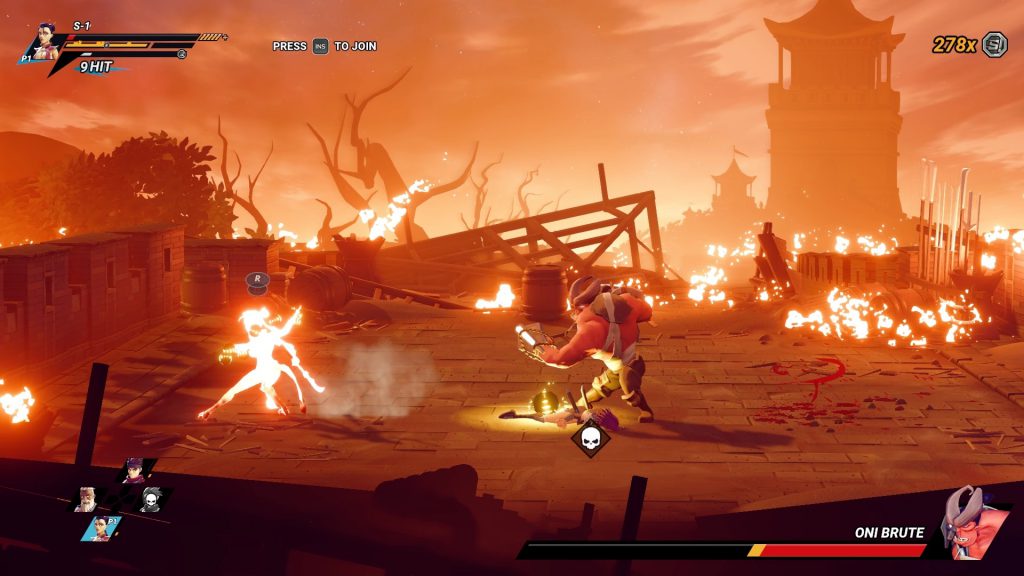 There are not that many bosses. Many mid-bosses are an introduction to their upcoming mook counterpart that you will encounter very often. It’s a very good idea that helps you get familiar with them before they get thrown into the mix. 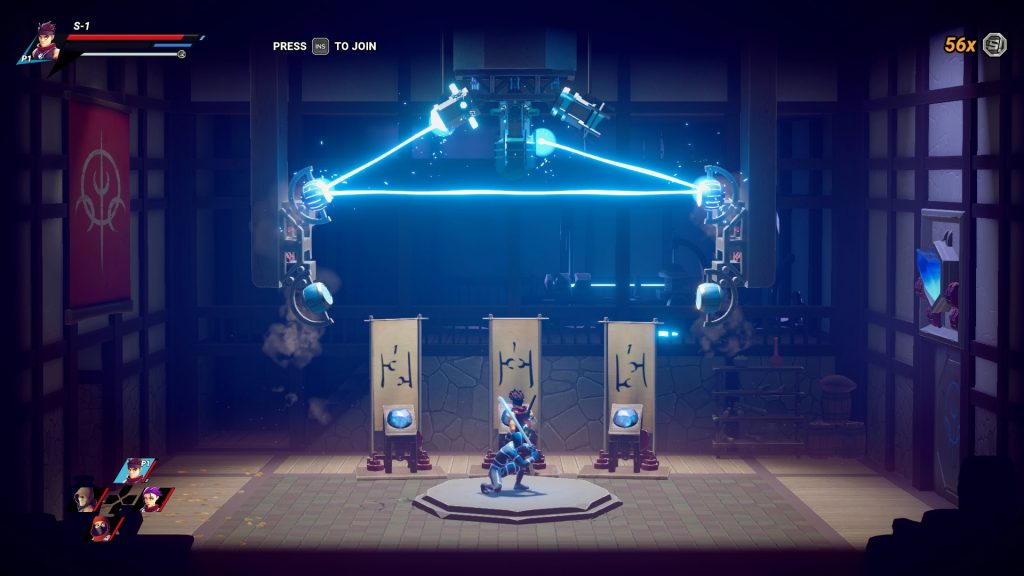 On some rare occasions, you will find mandatory puzzles. Nothing that doesn’t get solved with some good old trial and error. Aside from that, you can find optional Challenges that require you to do specific things like only killing the enemy with Parry attacks. You don’t have to find them within the stages again as they automatically get unlocked in the main menu.
There are also 4 difficulties with each of them having their Amulets to achieve by not getting hit and dishing out the pain. These amulets unlock more character skins so it’s purely a cosmetic thing.

Shing! Uses full 3D polygonal graphics with a stylized cartoonish visual design offering a relatively clean look but with additional gore effects such as blood and dismemberment. What you see is what you get.
When it comes to music, it’s rather unremarkable and I’m struggling to remember any of the soundtracks but the good news is that it’s not bad either! It’s a perfectly fine BGM that adds subtle touches to the atmosphere.
The voice acting isn’t bad either and they manage to bring out each character individually and the chemistry. The beginning might be sounding strange but it makes sense once you get used to the lighthearted comedic mood of the game.

Shing! Is a solid Beat’em Up that certainly doesn’t reinvent the wheel but manages to charm you with the lighthearted story and fun characters storywise. One could argue that it’s more suited for Multiplayer rather than Singleplayer just because the characters are so similar to each other and you only get the more fun stuff when you have a partner who helps you juggle the enemies for team combos. Otherwise, you rather get a bog-standard experience with debatable worse attack controls. Is it Beat’em Up 2.0? Not really but that doesn’t make it a bad game.

According to the developer there’s more to come but as it is right now, I’ll have to give it a Save for Later because the gameplay didn’t manage to convince BUT there’s a free demo on Steam and you should give it a try because it could hit the right buttons for you.