REVIEW: The Academy: The First Riddle

Personally, I don’t have the fondest memories of school. I took on a tremendous amount of extra-curriculars in my youth and wildly burnt myself out. Even with that experience though, I usually don’t mind school simulators. I find them to be engaging, and often times the forward momentum of days’ passing lends itself well to plot progression. The Academy takes this one step further, with the plot really a vehicle to deliver you to more and more puzzles day-to-day. The game’s story isn’t intended to be the core focus, but the puzzles themselves truly make the game worth your time if you enjoy scratching your head. 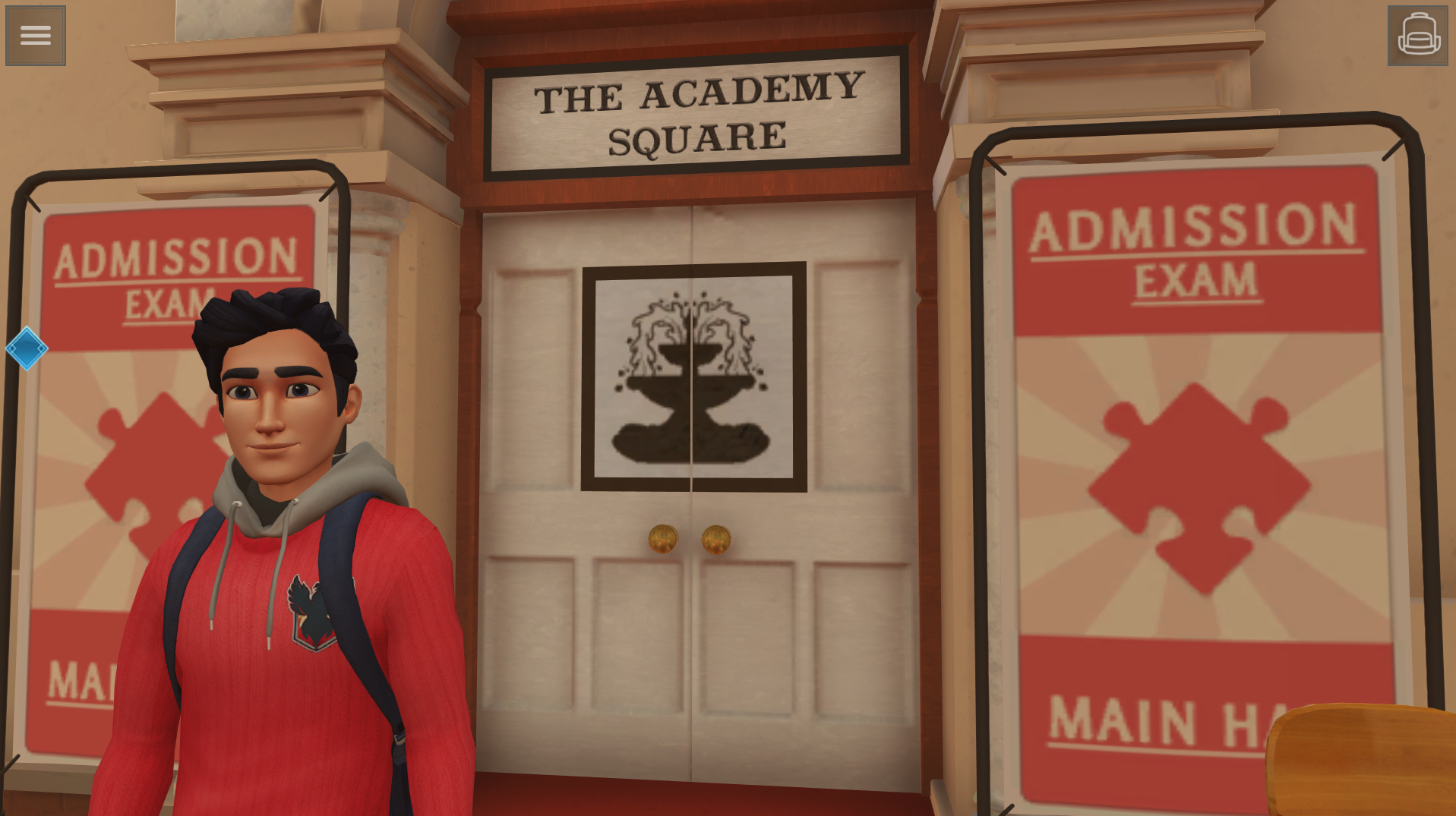 At the center of the Academy is a mystery. It’s one that presents itself early on in chapter one (of three total), when strange things begin to spontaneously happen around the students. You play as Sam, an unremarkable brunette boy who opens his front door to find a school uniform sitting outside. From there, the narrative jumps, and you find yourself at the titular Academy. Baron Alistair Holloway founded the place nearly 500 years ago, as a location for people to learn after the unfortunate loss of his wife. The entire story takes place here, and there are more than a few rooms and hallways to explore. The more time you spend at the Academy, the more you realize things aren’t quite right. There’s someone sneaking around after dark, and understanding precisely what they’re after is the core plot of the game. The Baron was a man of more than a few mysteries, and it seems he’s hidden a number of them among the school’s walls. 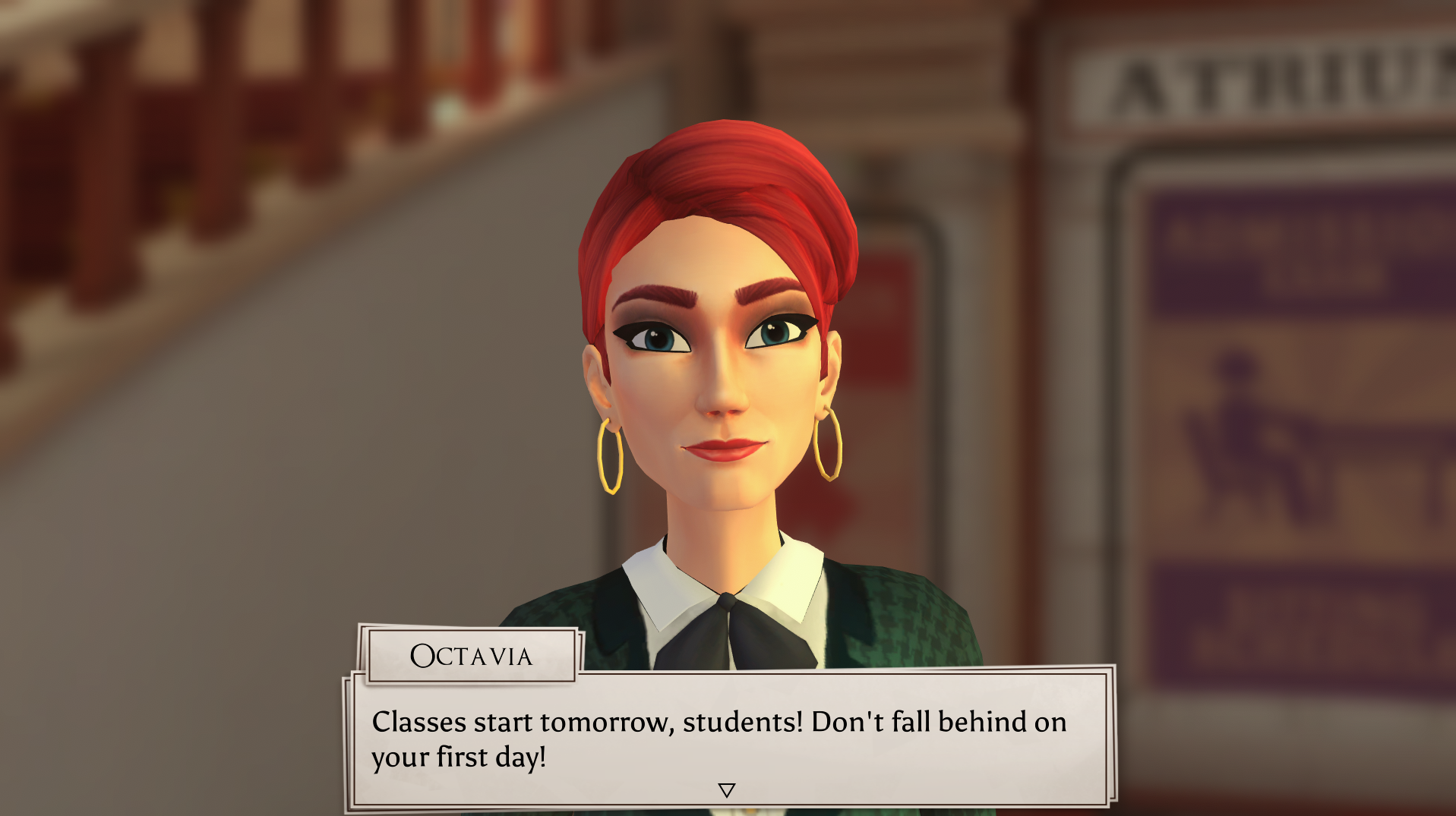 Visually, The Academy is adequate. The lightning in particular has a tendency to make everything sort of shiny, which is good against some models and questionable against others. The characters themselves look fine enough, though most look similar. There were a few graphic errors during the talking head parts, like a hand clipping through a character’s head when they went to cover their mouth or gesture somehow. Outside of that, there’s little variation in face models or clothing, but the environments look well enough to give most of that a pass.

The colour palette for the game is bright, giving the environment a cheery air even when eerie things are happening. Personally, I enjoyed the bright colours. It wasn’t uninteresting to look at or walk around in the world, and while character models often look the same, each person has a small detail about them that’s different from everyone else, making it easy enough to tell them apart. One girl has a scar through her eyebrow, another boy is heavier than the others, one girl has a coloured streak in her hair, and so on. 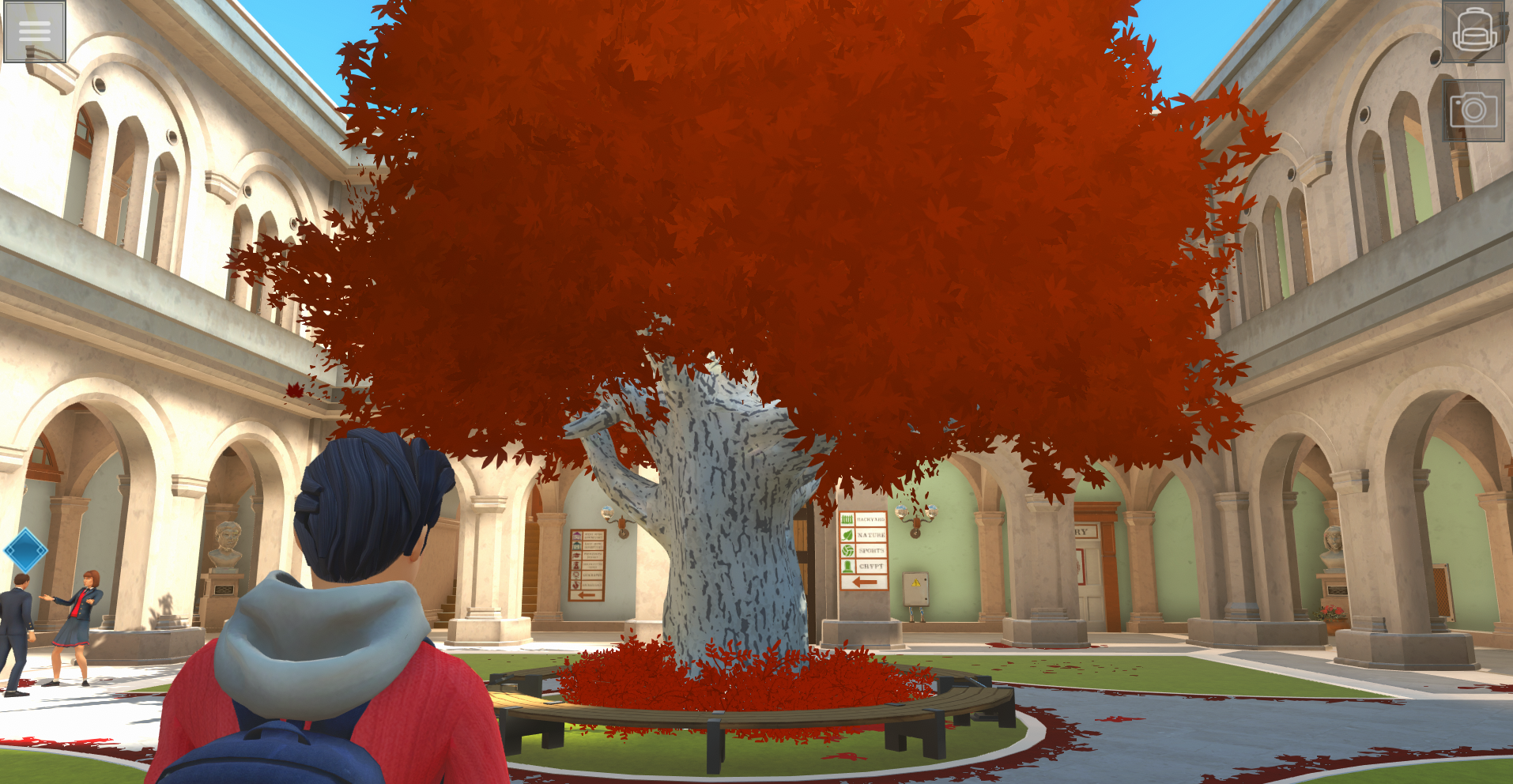 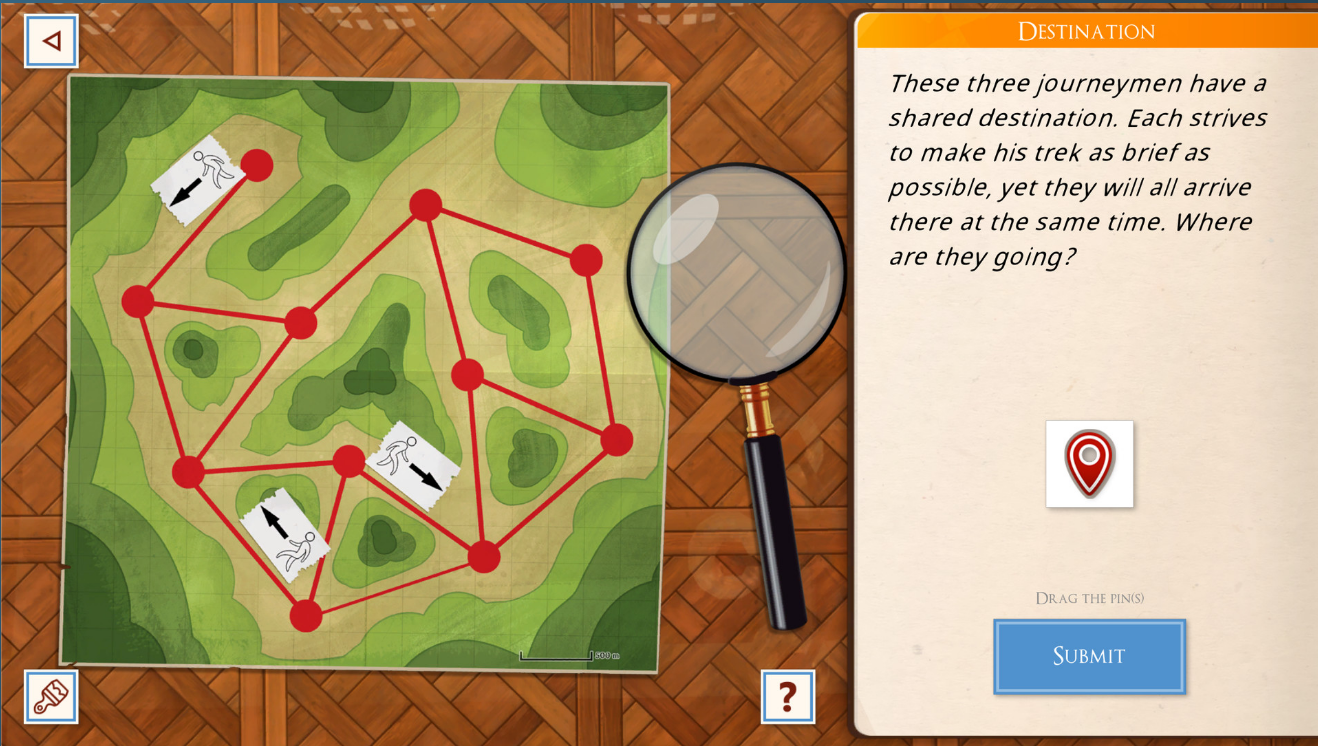 The primary method of interacting with the world is through puzzles. Honestly, sometimes the story feels as though it’s there only to lead you into more puzzles. Not all of them are logic based, or math based, or focused on your ability to look at and calculate patterns. Many puzzles throw you for a loop, intentionally trying to confuse you and obfuscate the true answer for something that seems more obvious.

When you receive a puzzle from an exam, or to untangle your luggage, or from a ditsy librarian who drops books, they aren’t timed. You get to solve them at your leisure, and once you complete the base puzzle, you’re able to move on to an extra bonus puzzle that claims to be a lot harder. If you’re ever stumped, there is a mechanic to retrieve hints. Scattered throughout the world are chocolate bars, and during the puzzle you can munch one to get one hint about the puzzle to try to guide you in the right direction. 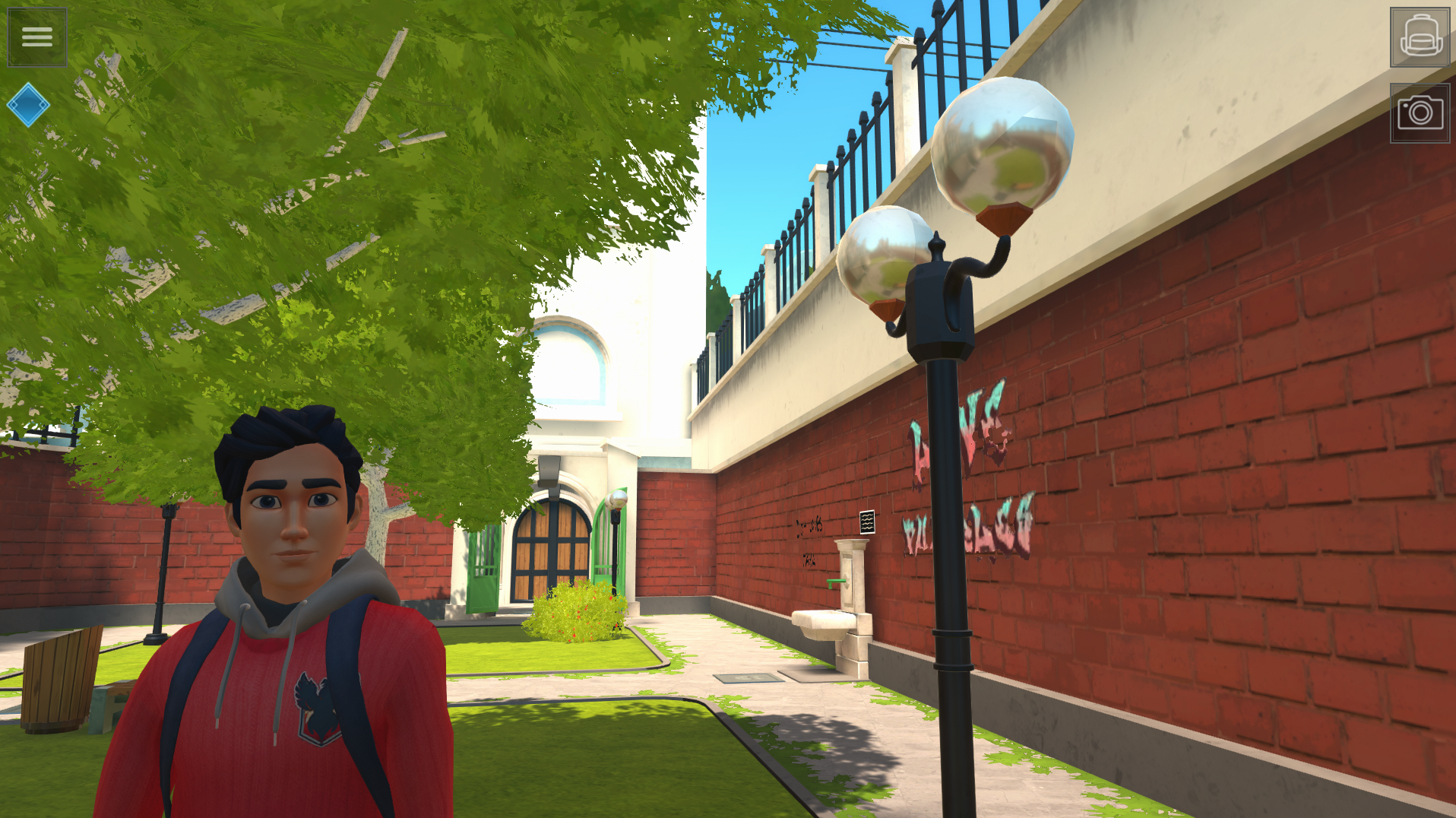 Quests are marked on your screen with question marks, golden books, or blue diamonds. Question marks show optional quests, golden books are classes that aren’t required but seem to be important to look into, and the blue diamond is your main quest. The icons always hover in your peripherals, and as you turn to look to them, show what doors to go through to make your way to your goal. As someone who struggles at times with navigation and directions, this helped me try to accomplish everything every single day. Movement is done throughout The Academy in a third person view, and you guide Sam along from room to room. I did this with a mouse and keyboard, only because I couldn’t get my controller to function with the game. Whenever it was plugged in, the mouse would lock in place, or glitch about the screen until I unplugged and restarted it. Wasd+mouse controls were fine, and there’s also an option in menu to play like a point-and-click game if you prefer to steer Sam with your mouse alone.

There are also other dailies to accomplish outside of classes and talking to your friends. Each day, the librarian hides a book somewhere in the Academy. Find it, and you can solve two more puzzles inside before it gets put back in her collection. There are also daily puzzles to do in the newspaper, and chocolate bar locations change from day to day. Upon a few attempts to reload the game, puzzles didn’t vary when I went through the day again, but there are enough puzzles in the game to still sate almost anyone.

As an avid puzzle fan, I would recommend The Academy: The First Riddle to anyone else who enjoys them as much as I do. The game is $20 on Steam, and offers over 200 riddles, puzzles, and one big mystery to solve. While the plot was personally a touch lacking for me, the puzzles themselves stumped me more than once to a point of guessing, and then laughing at myself once I realized the way to solve to get the correct answer. When it comes to any puzzle game, I love when they can confuse me enough to laugh at myself, and The Academy did that to me more than once, making the experience enjoyable despite a few other unpolished aspects.