The titular Annie is enjoying Halloween festivities when mutant crabs appear and cause a zombie apocalypse. There is some kind of conspiracy told through strange dialogue and over the top characters and this is the perfect setup for campy twin-stick shooting action. In between hordes of crabs and the undead you have to scavenge for things to sell to upgrade your gear for the next onslaught. 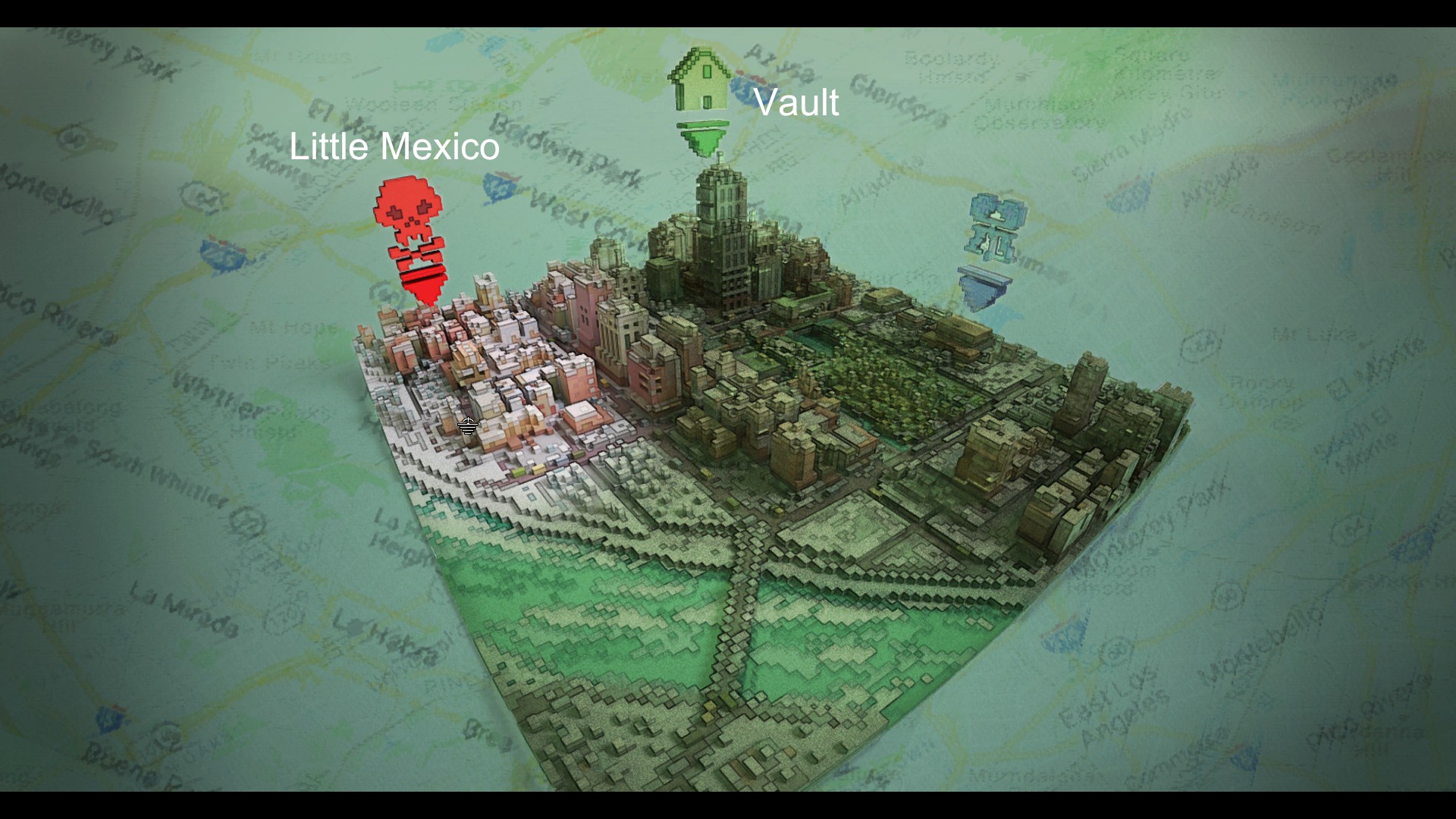 Pixel Rice has big ideas in mind for ANNIE: Last Hope, as a careful cinematic can be felt throughout. With the overlong cutscenes, forceful cinematography, and penchant for secrets and twists, the Metal Gear Solid series is an obvious inspiration. Several other games and movies bleed into the game as well, with some executions being handled better than others. Sometimes, due to translation or dialogue, the humor and sadness don’t quite hit the mark, but there is definitely a lot of effort put into creating the universe of ANNIE: Last Hope.

The twin-stick shooting action is pretty standard. There are a small number of guns available under different categories like shotguns, long-range and machine guns. As you continue through the game new tiers of each weapon can be purchased from a travelling salesman, but these are flat upgrades so there are no trade-offs or lateral upgrades. The shooting is handled ok, though sometimes the aim and hitboxes felt off. This was especially true during later sequences where the game played a bit more with angles and vertical enemy placement across rooftops: I painted my crosshair all over an enemy with my rifle, but for some reason, the bullet didn’t land until my crosshair was placed far and away from my actual target. 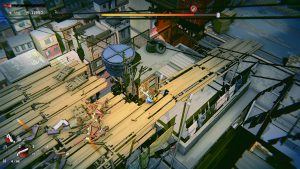 Outside of guns, there are a few tools at the player’s disposal. The character can also kick enemies for strong knockback and splash damage, which is strange because the shotguns in the game feel as effective as sneezing on the enemy. Melee weapons would have been welcome, especially since some horde sequences feel too long. There is a sprint button that should just be the default speed of the protagonist, and a decent dodge roll in a pinch. 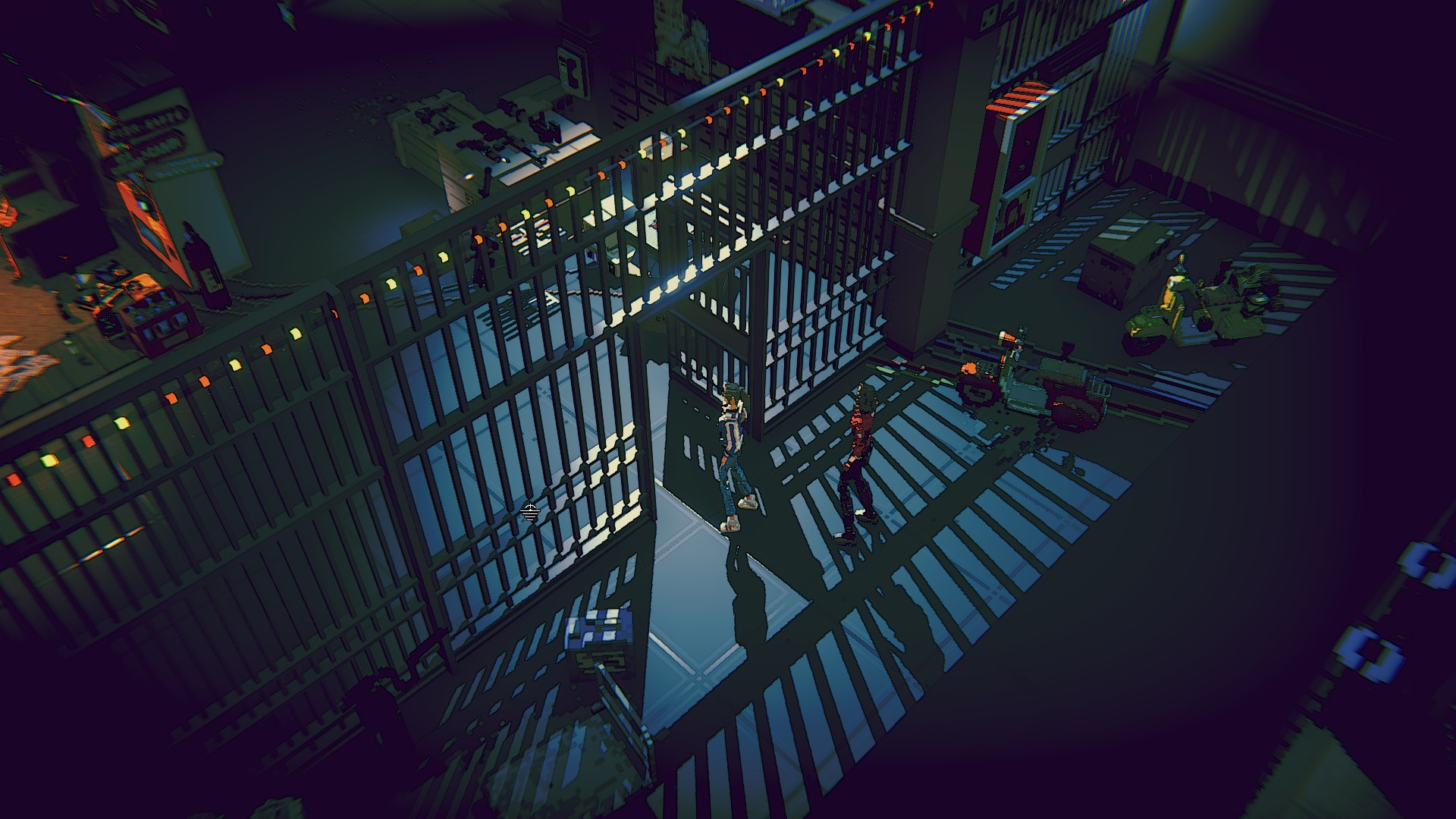 In between the horde wave survival parts, there is a good bit of exploring. There are wide open bits of city and wilderness as well as narrow passages down creepy halls. The lighting is certainly impressive and it helps to make the levels feel dynamic despite the design lacking variety. The enemies you come up against have a pretty wide range from possessed machines, zombies, crabs, and other weird creatures. Fighting them is also nice as the game later includes more projectiles and tactical encounters rather than just walls of undead being thrown at you. 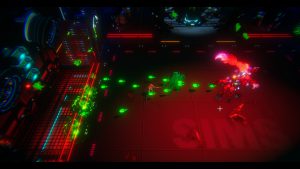 The bosses struggle to be taken seriously and most of the fights are a bit too easy. A few of the fights are heavily inspired by bullet hells and feel welcome. Others just feel like you are fighting a beefed-up regular zombie. Thematically, most of the bosses are a bit too silly and clash with the overall serious tone the game keeps pushing. That serious tone reaches its peak in the second chapter of the game. 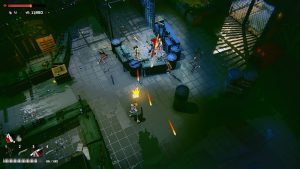 The second chapter is by far a highlight. Armed with only a bow, the player is tasked with taking on zombies carefully amidst environmental hazards that can hurt and help them. The focus on slower and more careful encounters felt like a welcome break and it certainly helped to bring the focus back on the sadder part of the zombie apocalypse (the part where most of everyone you know is dead). 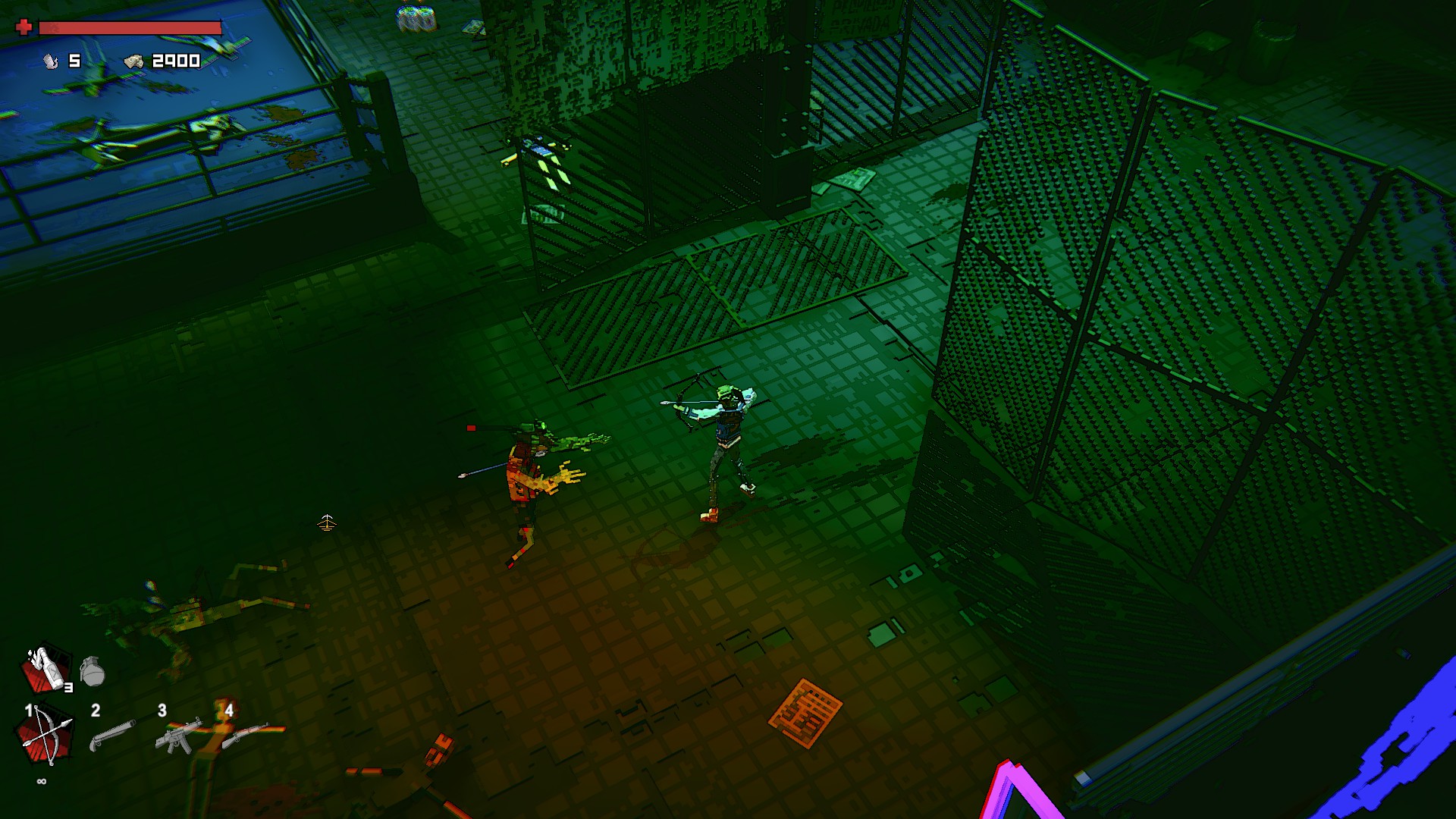 ANNIE: Last Hope has a clear vision mind, it just isn’t always consistent and clear with that vision. It is drenched, soaked, and deep-fried with a number of effects from vignetting, heavy lighting, coloring, cinematography, etc. Many of the cutscenes feel like they are from straight out of a movie, and it really does a great job of showing what voxel based art style can do. I have never seen a game quite like it. Certain moments stuck out, like a slow pan out to wintery scene or a somber piano-laden flashback. The sound design, in general, does a decent job keeping pace with the music, but the writing is sorely lacking. 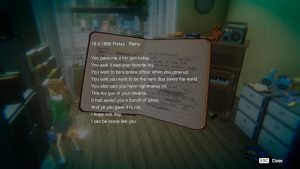 Some of the issues with the writing could come from translation, but some of the overall scenarios seem ridiculous or cliche. The gravity of the zombie apocalypse seems to elicit strange responses (and non-responses) from various characters. There are also weird jumps to drastic action or really questionable motives by many different characters. There were many parts of the story that felt out of nowhere. These were less like twists and more like a whole middle portion of dialogue and story were just left out. The most amateur strange actor would cringe at the dialogue of the stand out sleazy character in the game. The parts of the game that should be heartfelt are utterly flat and clumsy: the backstory flashback of the main characters appears a few times, and my eyes rolled just a bit harder each time. 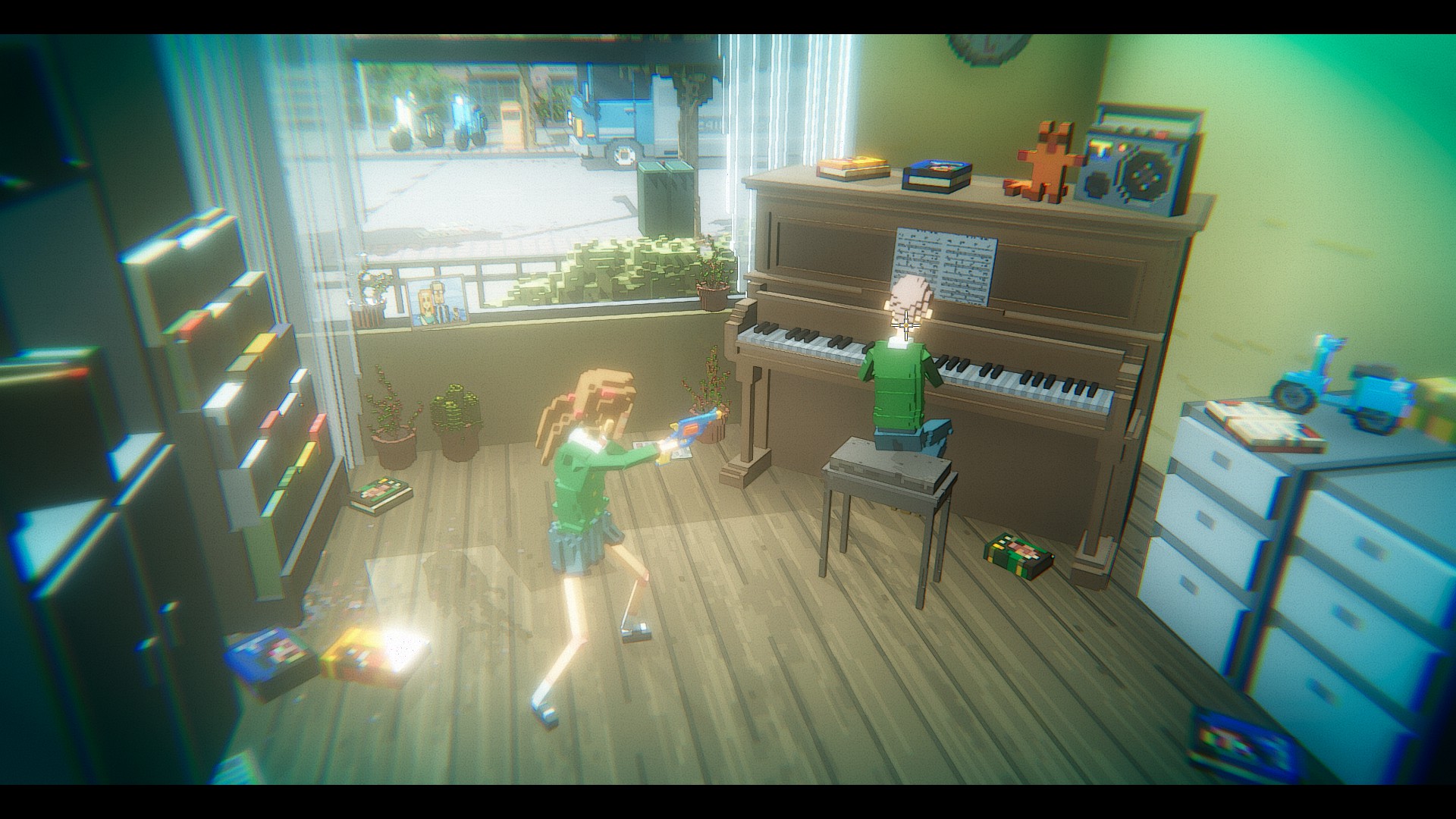 The basic feeling of gameplay is largely the same. Level design and exploration between shootouts still doesn’t feel necessary. There are still a few sections that feel like old school arcade traps meant to kill you several times in order to add some replay. The few bugs I ran into seem to be ironed out just fine. The biggest addition was the inclusion of the third chapter and ending of the game.


As much as I loved the second chapter and wanted more of it, the third chapter sadly feels like the first. It circles back to overly dramatic stuff that’s hard to take seriously, lots of bullets and hordes, and just a lukewarm feel of action. The action does change a bit with more of a bullet level feel and you have to fight more projectile-based enemies. It does not have the same quiet drama or slow-paced grit of the middle section. Story-wise the game seems to leave a lot unanswered, but it almost would have been strange and unexpected for it all to end neatly. Instead, everyone’s motivations are all perfectly unclear, maybe there is a bit of a happy ending, and now it is really hard for me to decide if Hideo Kojima’s auteurism is good for video game development. 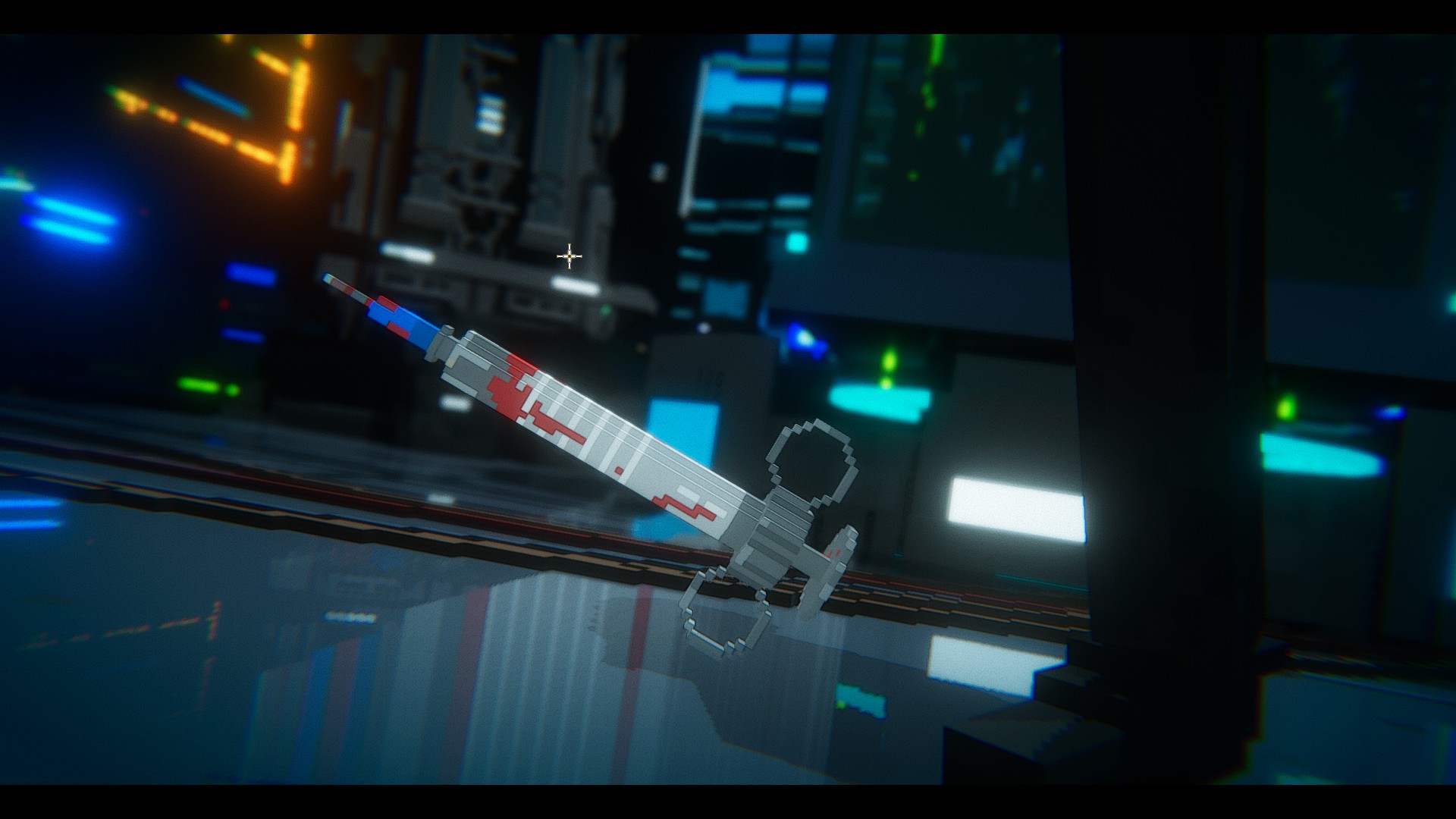 ANNIE has some interesting things going for it. The amount of effort and care that goes into cutscenes and style is admiral. The presentation truly jumps off the page. The shootouts bounce between being standard romps and something more interesting, although the bosses all around limply follow behind. ANNIE is interesting enough, and it will definitely find an audience, but it falls short of wide appeal. 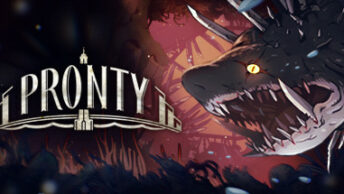