This roguelite has you digging deep

If you have a copy of Crawl, go ahead and start it up and make your name MNM. You’ll unlock Moonman for your profile. This was how I got introduced to Moonquest, through Moonman the mysterious poster child for a game that was 7 years in the making. It was supposed to be a mix of crafting, exploring and rogue-lite action. But was it worth the wait? 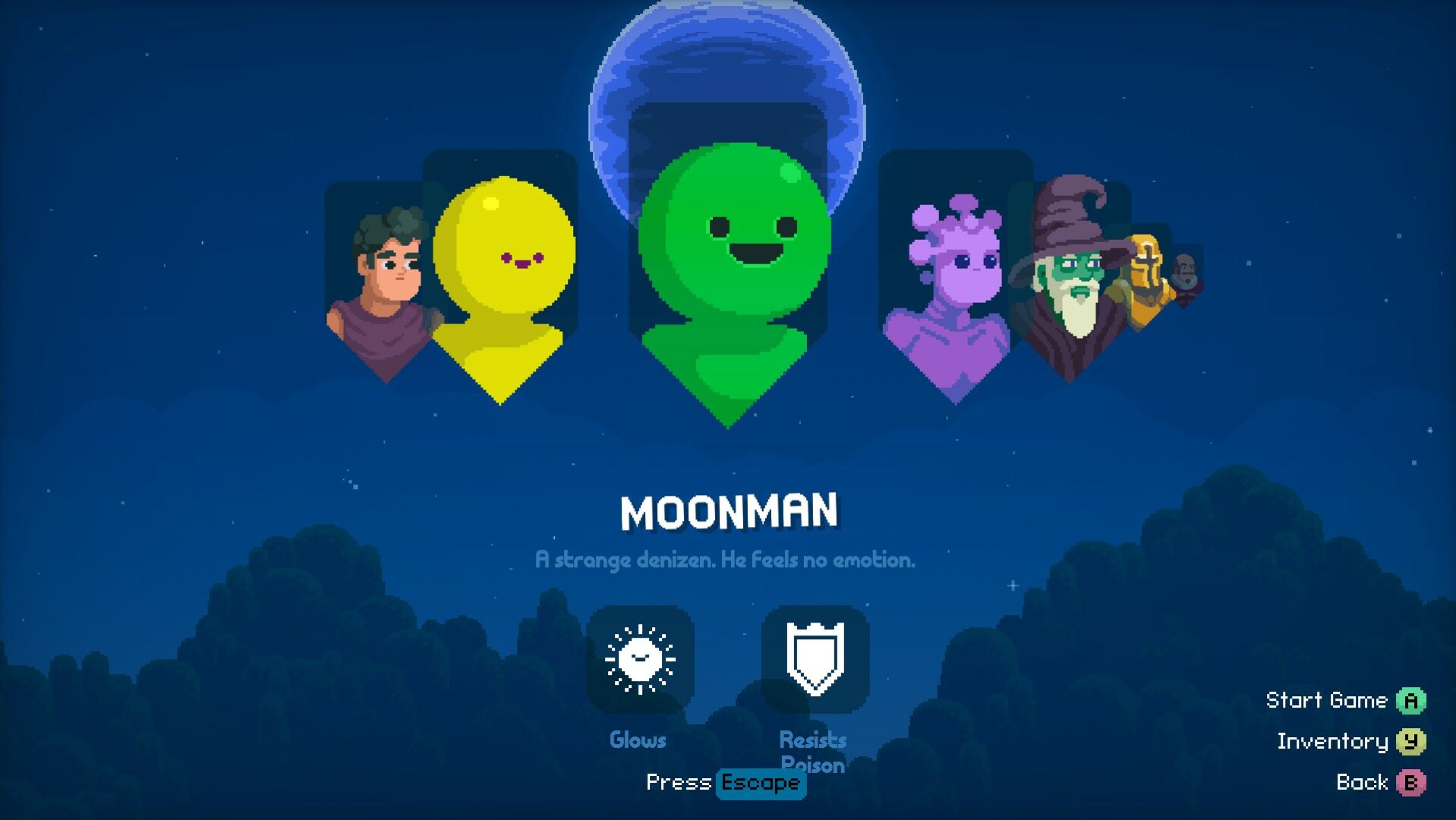 It’s not quite Terraria. That’s the best way to step into this game, because if you expect Terraria you will be disappointed. There are familiar bits, obviously the perspective and style, but even the resource gathering and combat are a bit different. With permadeath looming over you, the routine of gathering and building like Terraria wouldn’t make sense. There is not a tutorial to guide you, but the game is easy to pick up: in a procedurally generated world you need to find 3 moonstones that lie in different areas of the world and then bring them back to the starting point. 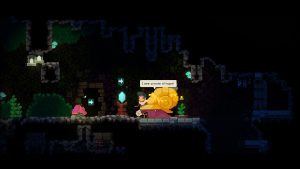 The resource and crafting portion of the game are quite light. It only takes a few whacks to mine most materials. Later harder substances will require better tools, which in turn requires you to find a town so you can obtain better gear. As the resources pile up you can use them to build different weapons, building blocks or even food. Most of the blocks you place will probably be used as platforms to reach higher areas rather than for making a permanent house. Because death means restarting, and the world is small and full of fast travel, there is no reason to set up a permanent shelter. 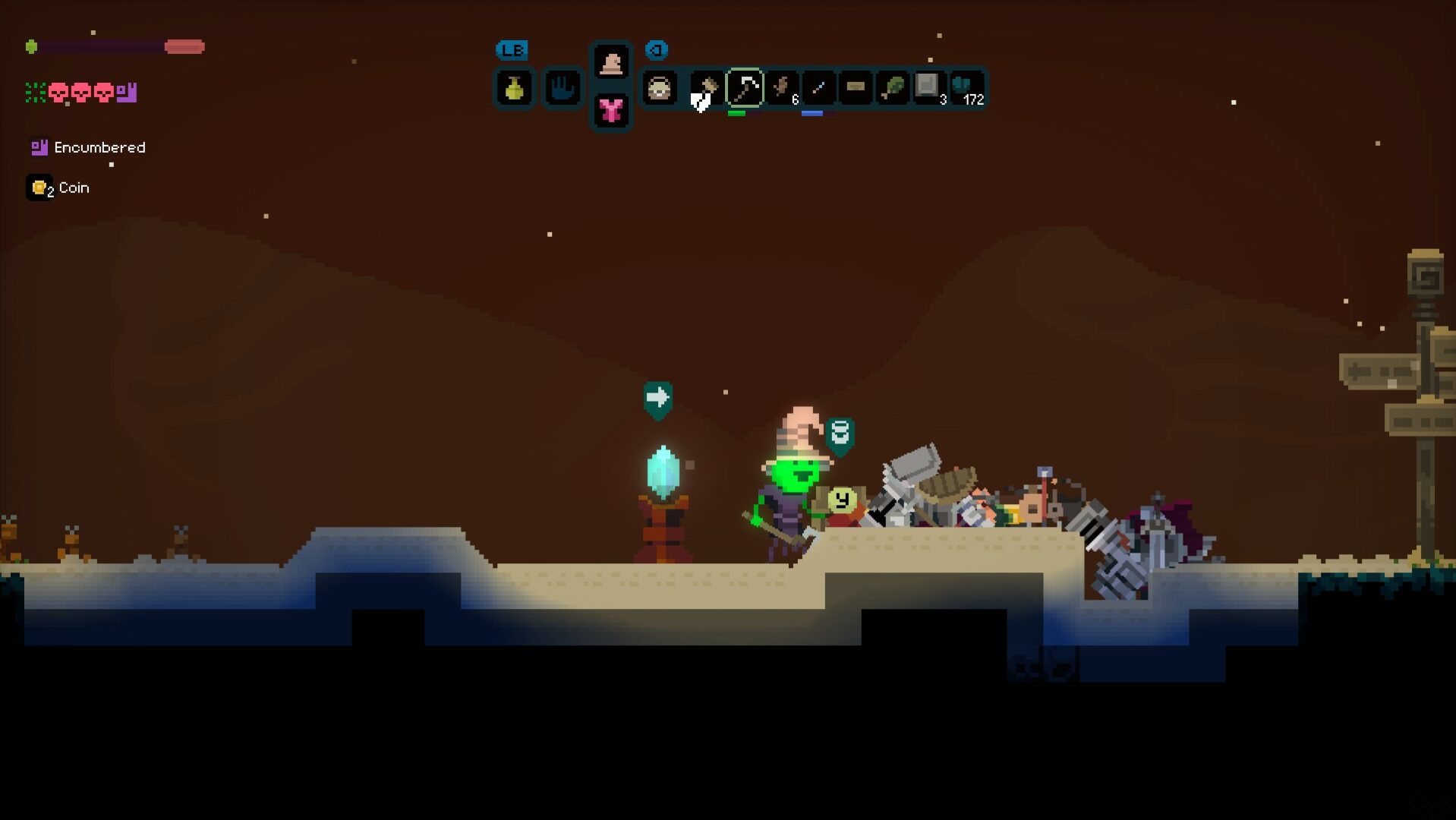 The combat aspect takes up a significant chunk of the game. The weapons have different stats and sometimes different hitboxes, but there are no combos or different attacks. Instead, a spear has more reach than a sword, and a giant sword will have a larger hitbox than a smaller one. Ranged weapons feel pretty overpowered as only a small number of enemies can use ranged attacks. My personal favourite in my run was a high powered cross that shot explosive arrows, but the wands and staves were also nothing to scoff at with their range and damage. 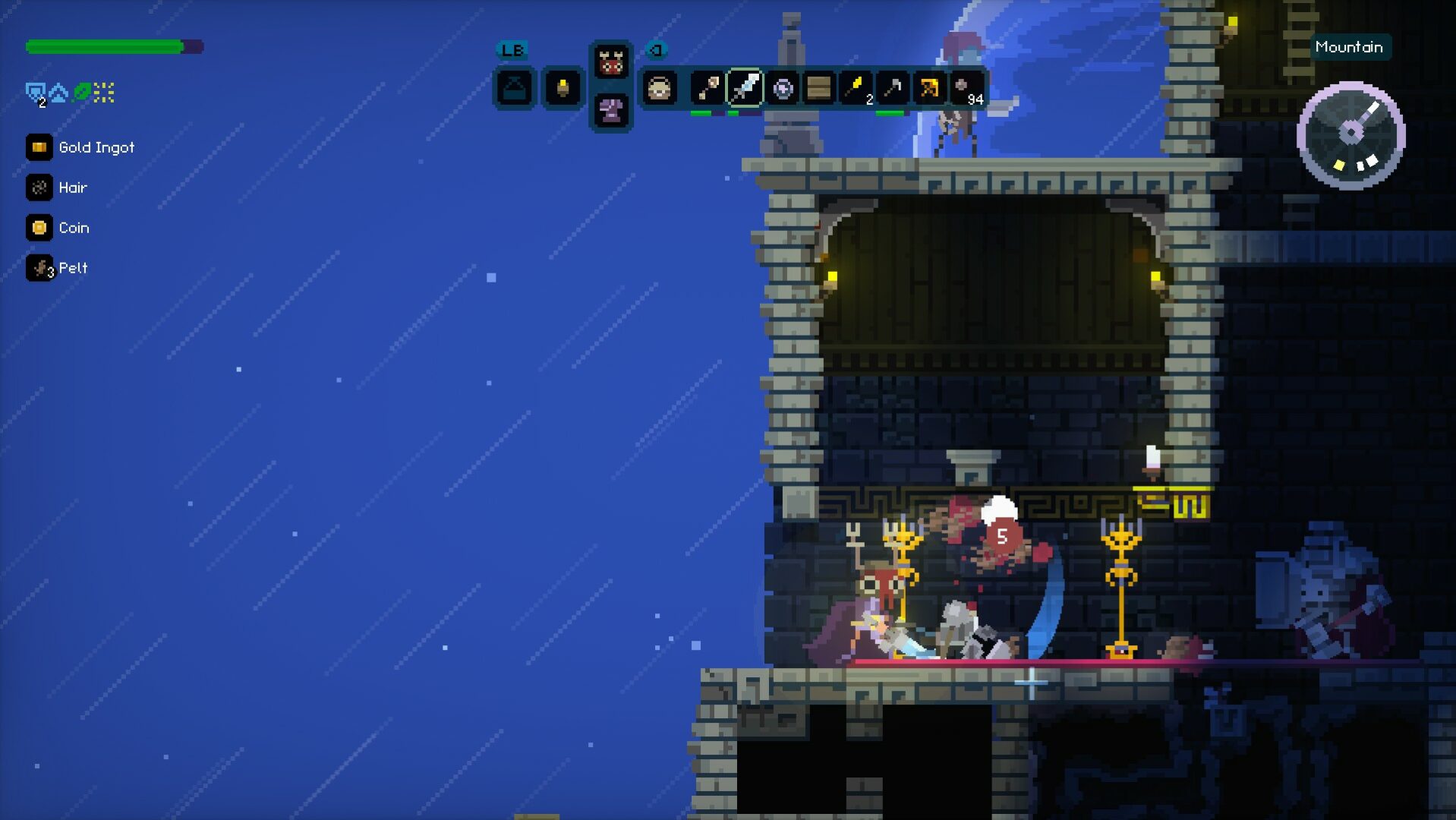 Encounters generally don’t feel that intense as even if the enemy has high health or damage, they tend to shyly approach the player like a blind date and will stutter at the slightest prod. There were very few times I even approached critical health, and even though health isn’t easily regained with crafting or found food, it always seemed to appear when I needed it. In the absolute worst scenario, many of the armor pieces I picked up boosted my jump so running away to fight another day was always an option. 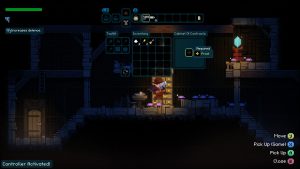 There’s a colorful cast of characters that each have their own stats and traits. They can greatly change how the game is played, such as being able to breathe underwater. Unlocking new characters is also a neat carrot on the stick. Unlocking new characters requires meeting specific criteria and is the game’s form of progression. Some require certain actions and others require you to finish the game with a specific character. The stand out for me was the outlaw who actually has a different goal for the game and comes equipped with armor and a gun. 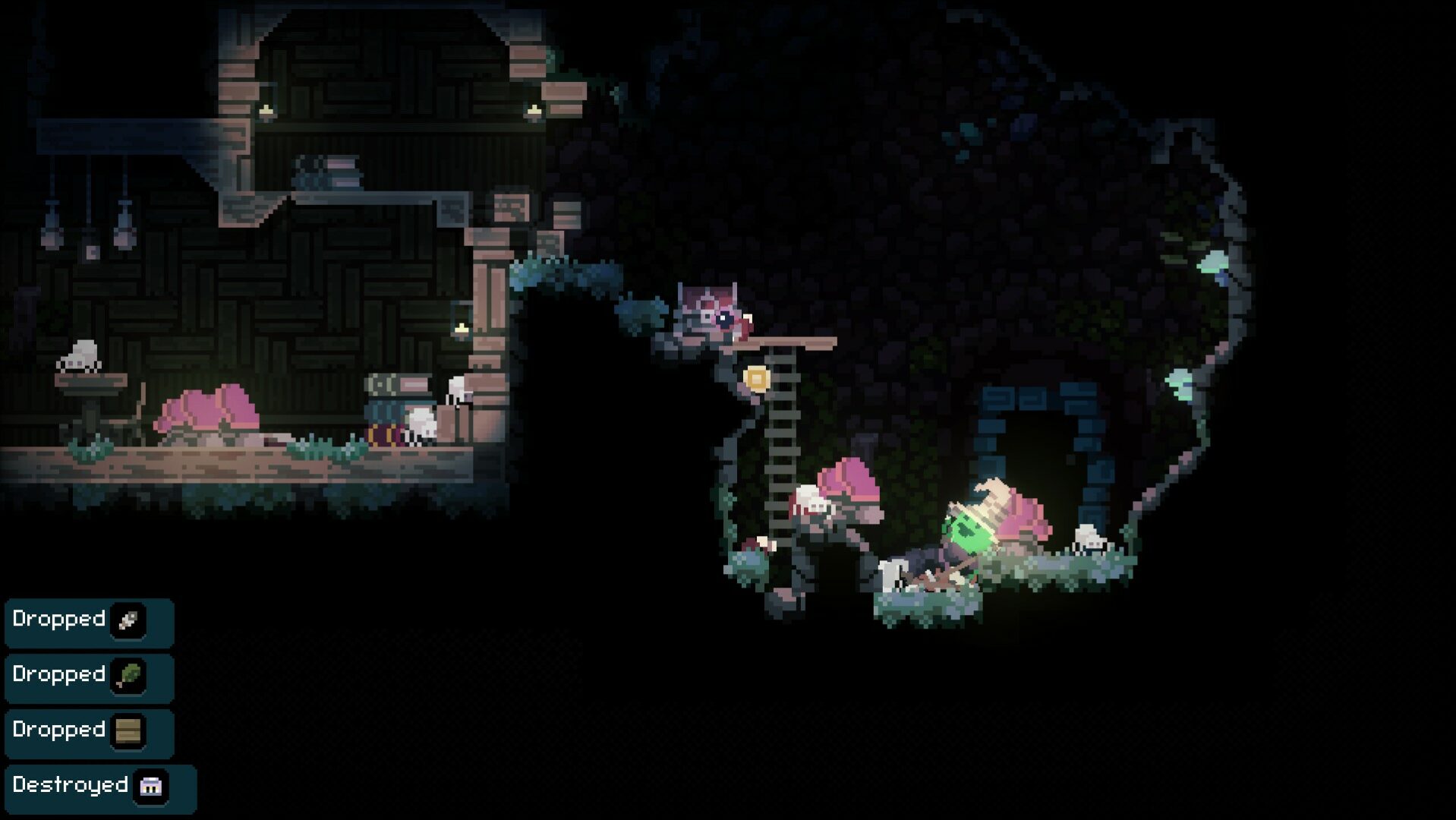 There is an item called a compass that helps highlight doors in a level. When you use a door you go to a different level of the world, and you need to do so in order to find all the moonstones. This is tedious. Every time I slew a large enemy, found a strong weapon, crafted a tool, or explored an area, I kept asking myself, why I am not progressing? 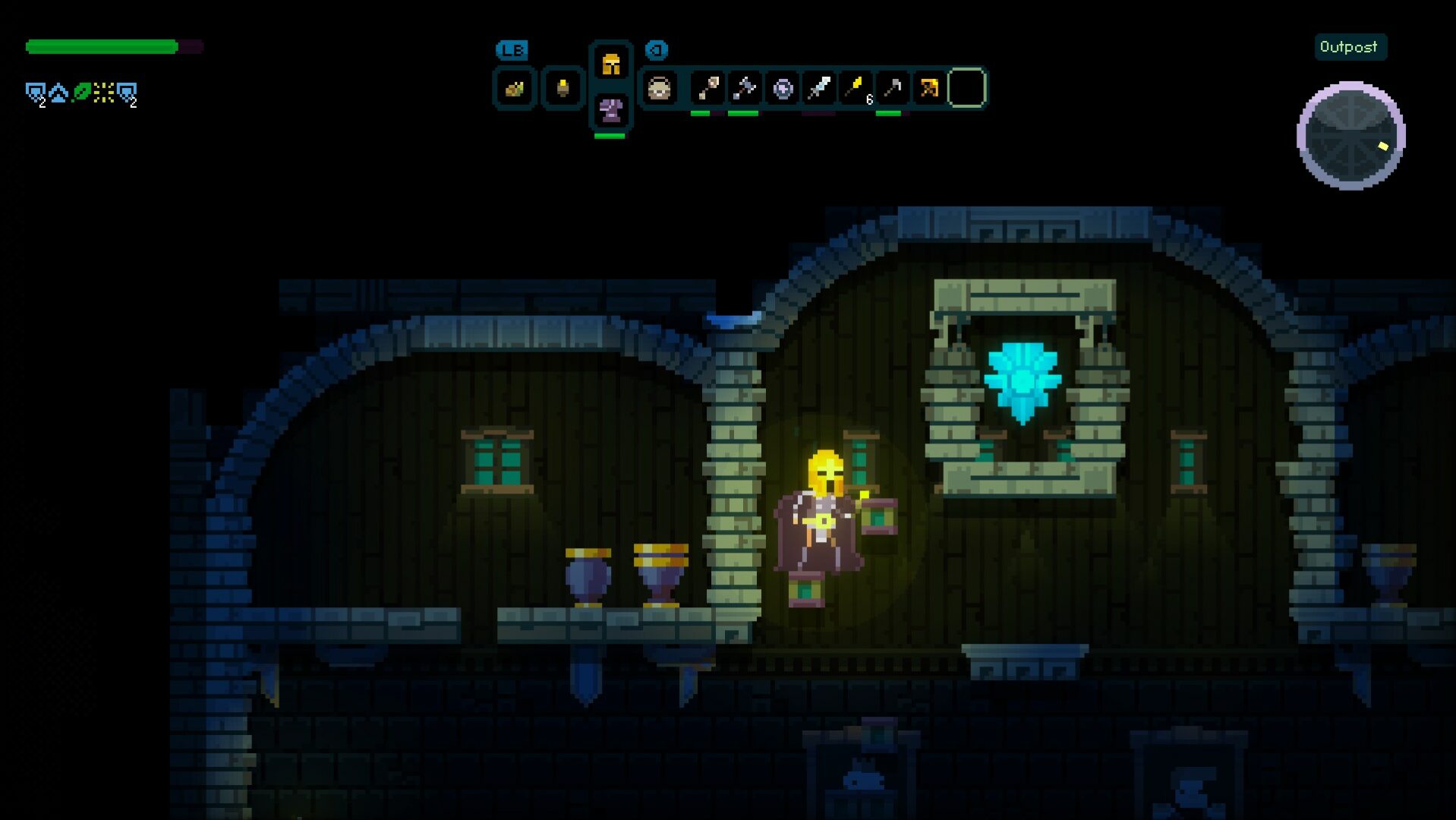 The 4 hours it took to complete my first run were filled with listlessness. Crafting things with no intention in mind and killing everything I could because I didn’t see anything else to do. I had plenty of things to craft like doors and walls, but there didn’t seem to be a point. Even crafting weapons does not feel like a good use of time because killing enemies is easy and great weapons are often looted from corpses and chests. To clarify, by the first run I mean my actual first time playing the game was void of death. On the next run I played more recklessly and found that you can die a limited number of times, each lowering your max health, until after a handful you can no longer respawn.

There was rarely any danger of getting killed in Moonquest, but I certainly feared losing interest. Wandering around the same levels hacking at every bit of breakable terrain then having to place blocks to climb up to places stopped being fun early on in the quest. It was certainly nice to see a new notification blip announcing a character unlock, but I wanted Moonquest to choose: am I meant to build a home and endlessly adorn it with better materials, or find the Macguffins to end the game as quickly as possible? 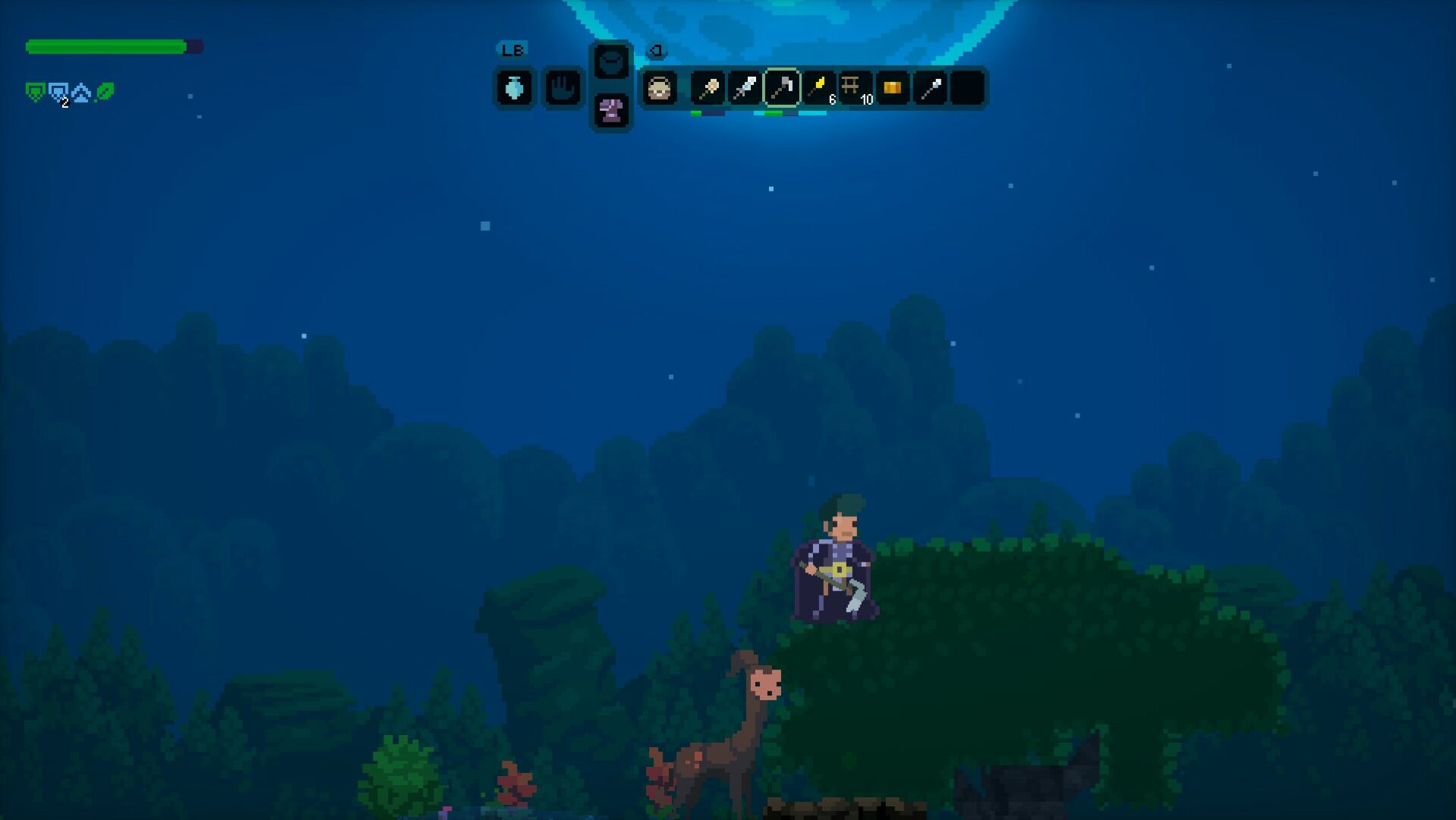 Nothing about Moonquest is bad, it just has a questionable aim. There is a nice sense of wonder and a cute style. Sometimes it is fun to explore the world, and procedural generation will keep runs fresh. Even though there is the overall goal of collecting stones in place, some players might like roaming around and collecting different materials and loot. It’s certainly nice to look at and it plays smoothly. Moonquest can be enjoyable, but it will not be everyone’s cup of tea.