A big world to explore and a few unique mechanics makes Fates of Ort a real hit.

It’s a good time to be an RPG fan, in the last couple of years we’ve seen a lot of great RPGs being released, and it’s in this crowded market that Fates of Ort tries to find its place. The makers of Fates of Ort have been smart though, and instead of trying to go toe to toe with the giants of the genre, they’ve made a unique, and interesting game that’s different from anything else, yet feels familiar enough that it’s easy to pick up and play.

In Fates of Ort you’re playing a mage, in a world where using magic has a cost. Either the magician will end up drawing from their own life force, or that of the world itself. This makes using magic a strategic choice, do you want to pay the cost of casting spells, or would you prefer to go at it the old fashioned way and hit the enemy with your sword? That’s not the only thing that sets Fates of Ort apart from other RPGs though, an even more significant thing is how time stops when you do, turning this action RPG into a surprisingly tactical game. 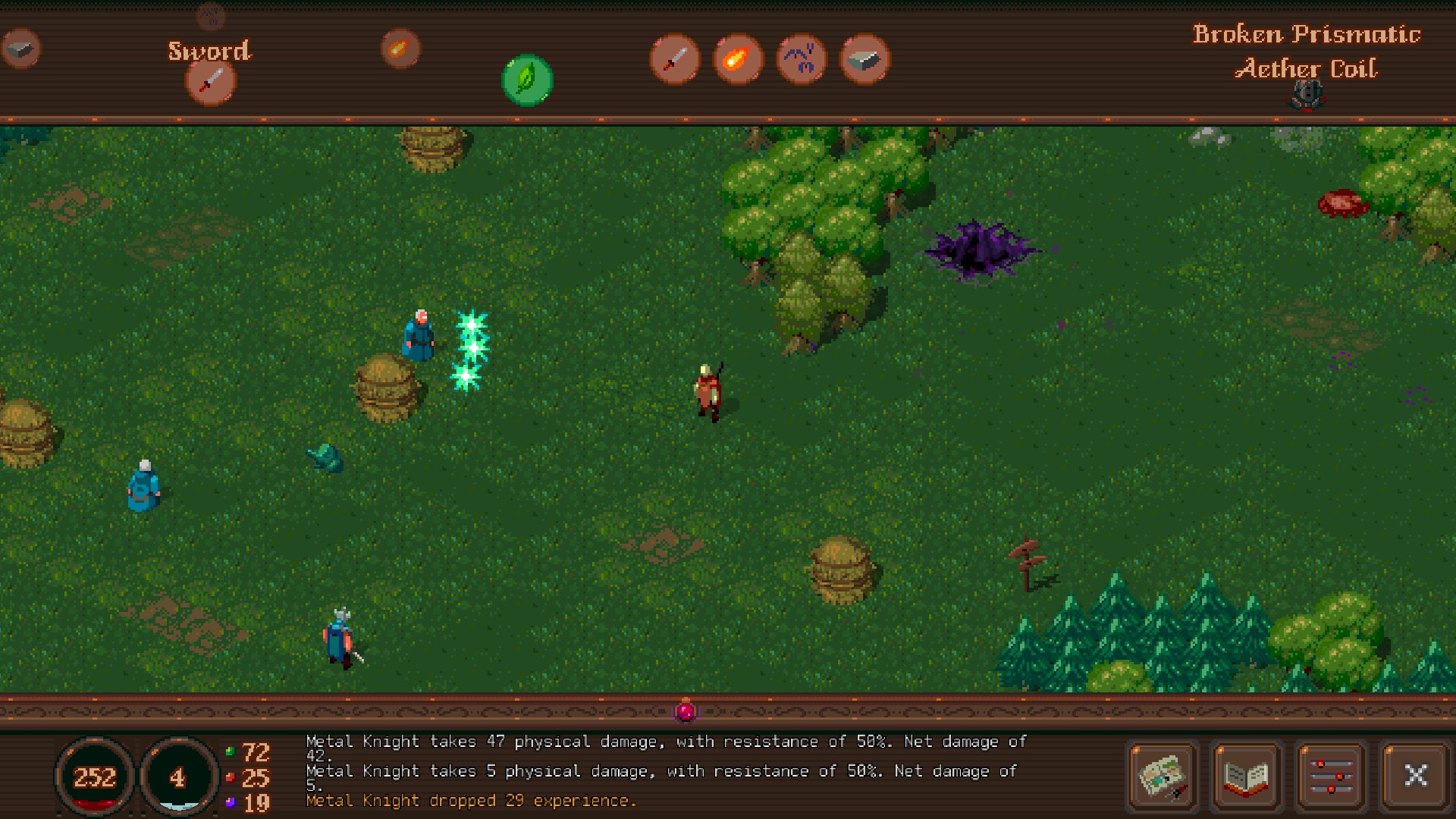 The main character looks a bit like tonberry (Final Fantasy), does he not?

The Duke Camersolt has unleashed “consumption” on the world. He offers power to those willing to accept it, but the power corruptions, it turns people into monsters and tears the world apart. And this is where you come in. During your first day in the academy, Camesolt barges in and offers you his gift. No matter if you accept or reject it, the academy gets destroyed, your sister killed, and the world around you starts to show signs of the consumption. And now you need to figure out a way of stopping Camesolt, and in the process hopefully, revive your sister and rescue the few remaining people from the academy.

Fates of Ort is a very non-linear game, and as is the norm with games that don’t really have a single intended path through the game, the main story ends up suffering a bit. Instead of just leading you down a pre-determined road, the game asks you to go out, and explore the world, and deal with the main story once you feel like you’re ready to do this (and you’ve gained enough power). And through the game, you find a lot of side quests and smaller stories. Some tie into the main plot in a way and many don’t. How you approach these side quests is up to you, with several of them having different ways you can approach them. 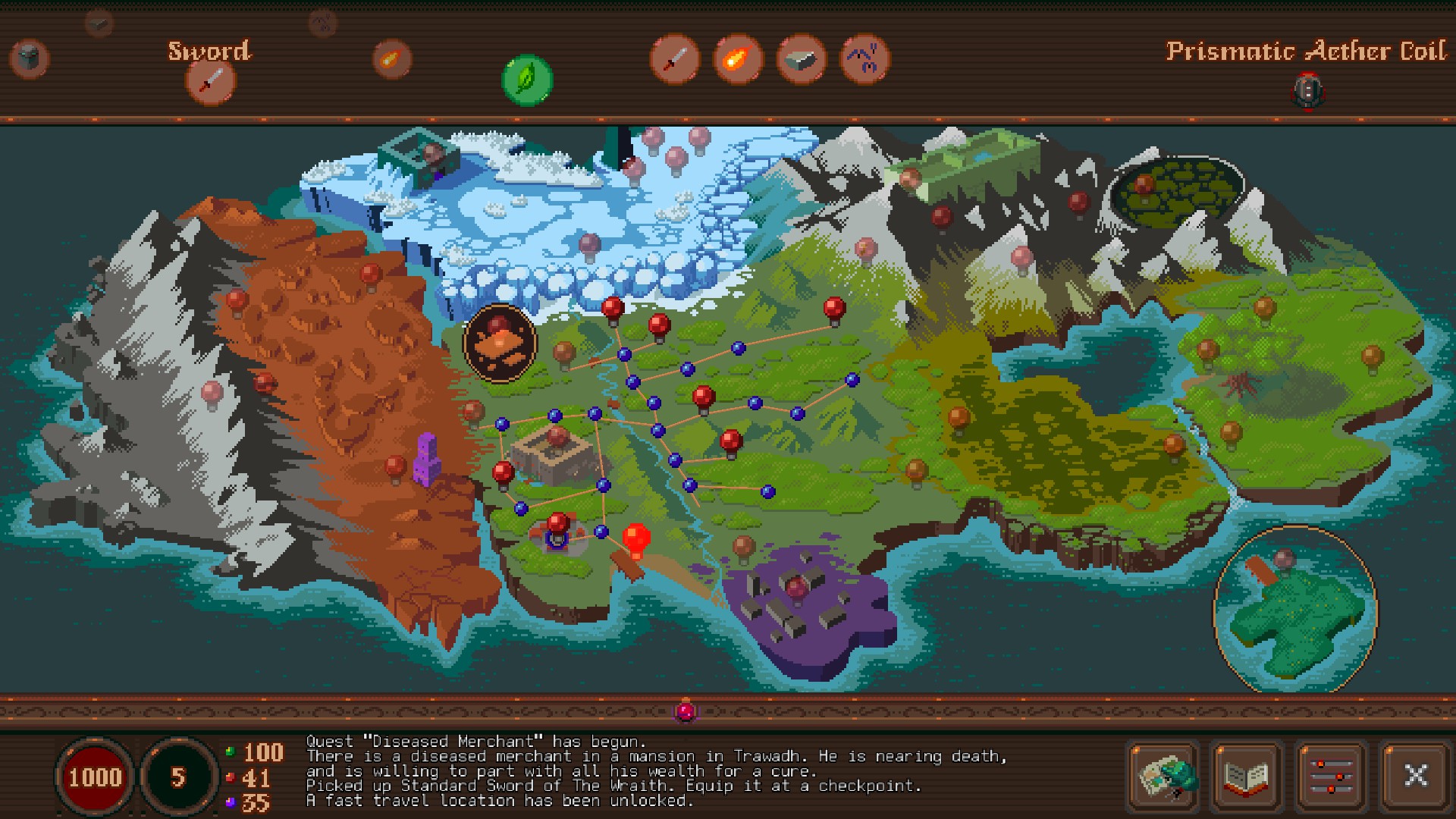 While the setting in Fates of Ort might not be quite as well-realized as some of the genre’s greatest, there are still a lot of small touches that make it feel coherent. People do for an example share religion across the world, although there seems like depending on where you are, people have a slightly different view on the exact details. There are also a lot of quests that intertwine in different ways, and this really does wonders for making the world feel more alive.
Less good at making the world feel alive has to be all the weird places you find hostile people. Why are all the castle guards attacking you on sight? Highway robbers make sense, most RPGs tend to have a lot of those, but castle guards? It would have made more sense if they turned hostile after you had done something to upset them.

The game’s writing is generally quite good. There’s a lot of dialogue between you and different NPCs, and it’s generally well done, with NPCs feeling like they belong in the world. There’s also a good balance between exposition and brevity here, the dialogue is usually short and to the point, but gets what it needs to get through. 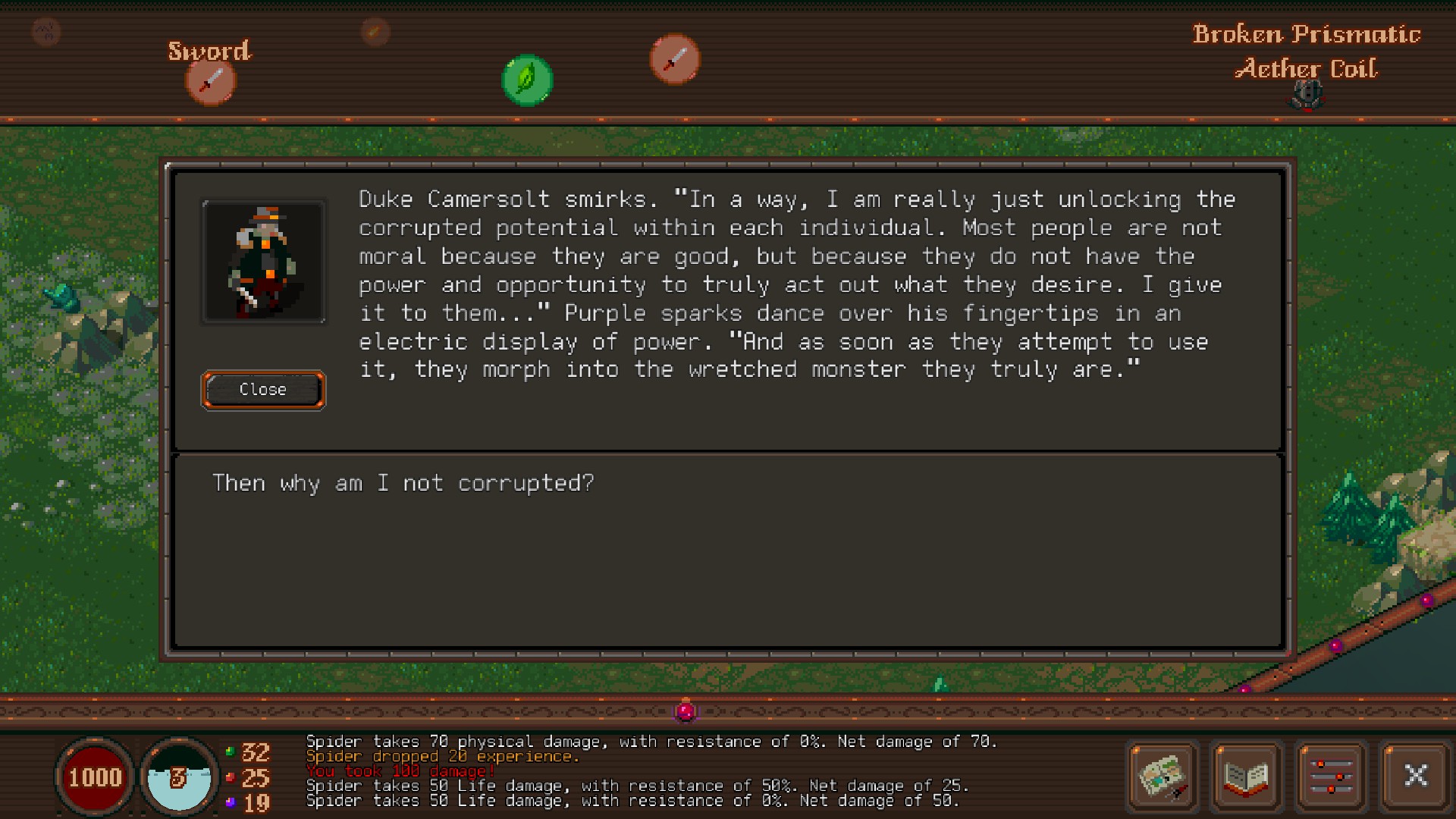 The Duke is really not a particularly nice person…

There will be those who immediately write off Fates of Ort because of its pixelated graphics, and that’s a shame. Fates of Ort has an intentionally low-fi look to it, with big, chunky pixels and bright colours. It all comes together pretty well, and while the graphics might not be as detailed as some other games using a similar art style, there’s a good amount of variety here, with many different enemies and backgrounds. The game is also quite easy to read, with the bold, contrasting colours making it easy to figure out what’s going on, and what you need to worry about.

The soundtrack is also really good. This might not be the kind of soundtrack that sticks in your mind once you’re done playing, but as background music, it works really well. The composer did a good job at making a soundtrack that fit, and never felt intrusive. The sound effects are also good. You can feel the impact of your actions, and it’s weirdly satisfying to hit a group of enemies with a fireball, but the sound effects never go overboard and become annoying. 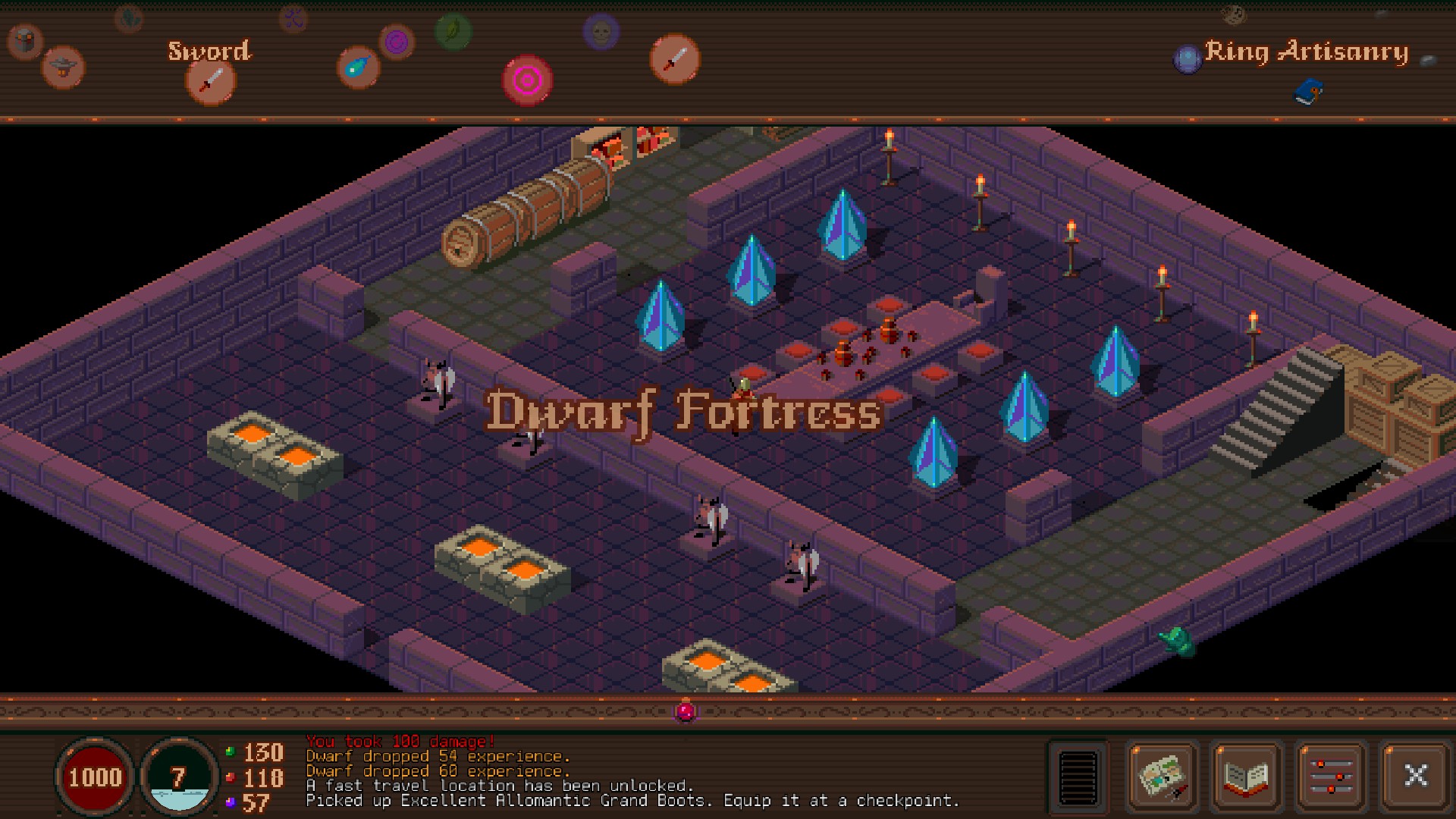 Fates of Ort is, at its core, an action RPG. You move through the world, fight enemies, and earn experience and gear. Were it not for the fact that the game stops when you do, it could be compared to games like Sacred or Divine Divinity, only a bit simpler. But the fact that the game pauses makes a big difference. It changes combat from something very hectic, where you would normally end up taking a lot of small hits into something more strategic, where the game can afford to punish you for your mistakes, but always gives you the tools necessary to avoid them. Enemies will generally hit quite hard, taking off 10% of your life in one swing, but they telegraph their attacks well, and enemies using ranged attacks will often shoot a lot of projectiles at once, but you can usually dodge between them without any real trouble, as long as you stop from time to time to take in what’s going on. And unlike most other action RPGs, you don’t have any way to really heal during battle, you need to return to specific places to gain full health again, although depending on your path, you might get a small amount of health from slain enemies.

As Fates of Ort is a rather non-linear game, exploration is a big part of the game, but the exploration never feels overwhelming. There’s an in-game map, and it clearly shows you where you are, where you’ve been, where you can go and also any fast-travel points, including ones you’ve yet to discover. This makes it easy to set goals, and know in which direction you should explore. The way the world is built up is also good for this, it’s not one big wide-open world, but rather a series of connected maps, with clearly marked exits. And fast travelling is very generous, you can, at (almost) any time open your map, and travel to a previously visited fast travel point. 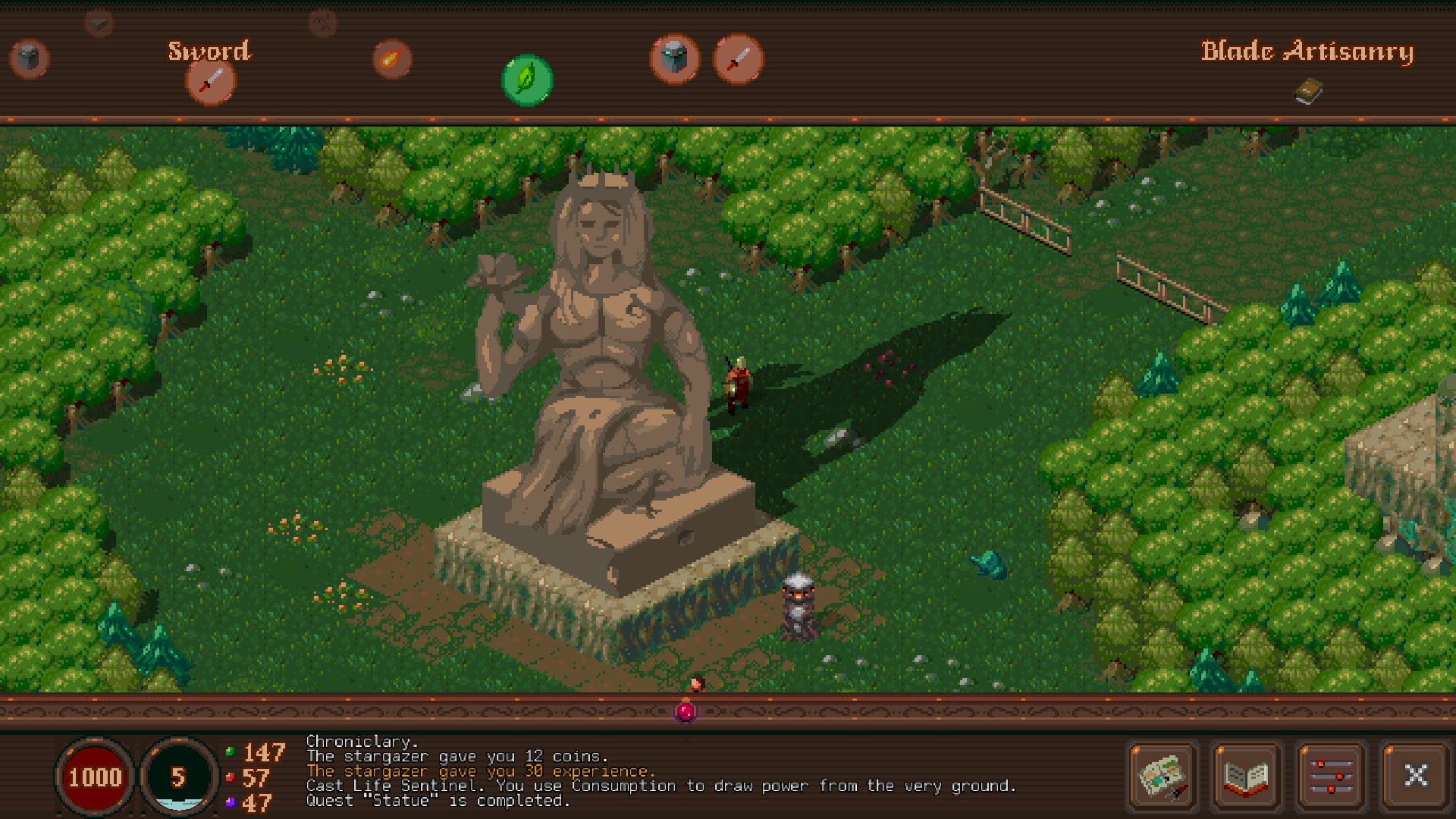 Not all quests have as simple solutions as this one

Questing is a big part of the game, and there are a good amount of side quests. These range from simple things, like help a farmer catch someone who’s sneaking into their property, to larger things like raising the dead, which requires you to go through several other quests for you to get the tools needed. And here’s where Fates of Ort really stands apart. In most other games you usually have one, maybe two or three, ways to do something, and you simply take the approach that fits your character build, or alignment the best, but in solving a quest one way will usually not impact another (although it might lock you out of some quests if you anger the wrong people). In Fates of Ort you have an inventory of quest items, which are single-use, and many of which can be used in several different quests. A good chunk of the quests have more than one way of solving them, which in turn requires different items, but you can, and probably will lock yourself out of completing a few quests based on the items you use. The game lets you make bad decisions, but it never prevents you from completing it, and not getting a specific reward that comes with some quest is never crippling.

Then there’s the magic system. Magic is very powerful in this game, one or two hits is usually enough to take down an enemy (and those around it as well!), and unlike your default attack, which is a short-ranged sword swing, magic can be done from a distance, making it a lot safer to use. But it comes with a drawback, using it is costly, and it either drains you, or the world, depending on which path you chose to take. Thus you’re encouraged to use magic when necessary, not as your primary way of dealing with problems. Magic also doesn’t just deal damage, there are a lot of different spells, from teleportation to the ability to create walls, or mind control enemies. 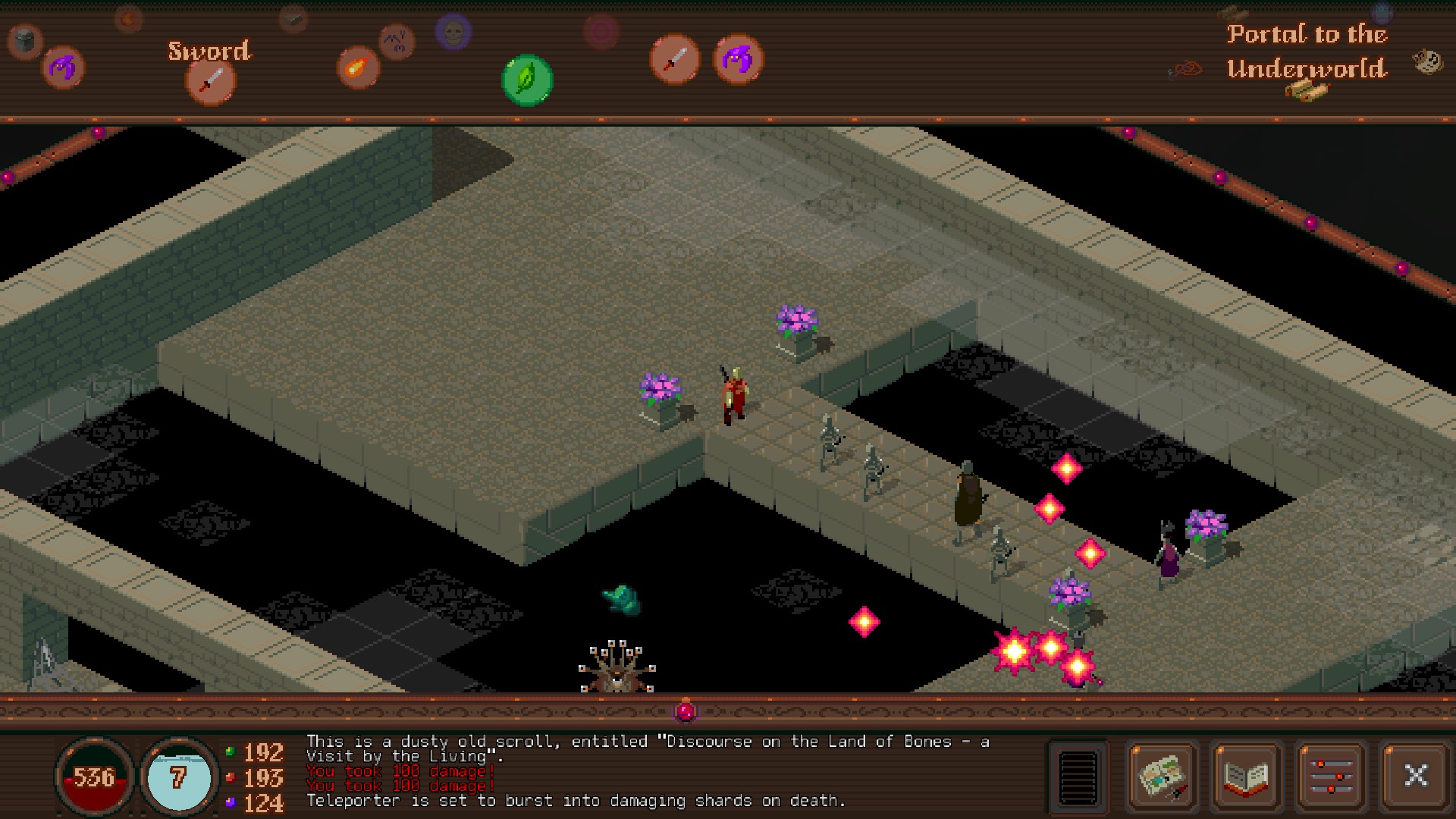 It’s at times like these that magic comes in handy

The RPG part of Fates of Ort, that is your character progression, is not as central to the game as in most other action RPGs. When you level up, you get access to more spells, and you get to choose which spell to unlock next, but you don’t level up very frequently, or get a big and noticeable stat boost from levelling up. The other thing that will make you more powerful is equipment. You’ve got a couple of equipment slots, and whenever you kill an enemy or open a container, you have a chance of an item dropping, with randomized stats. These stats are not the usual RPG fare either, like +5 Strength and +9 to fishing, but rather more direct things like +30% movement speed, or projectile distance, that sort of things. They’re less abstract than most RPG stats.

Fates of Ort is a really good game. Let’s just start there. It takes a few risks and does a few things in ways I’ve never seen before, but it still remains approachable, and easy to play. Combat is fast and fun, the soundtrack is nice, and the world was a blast to explore. I usually don’t enjoy games that just dump you into a world and tell you to go out and explore it, with little direction from the start, but the way this game handled it made it feel less daunting, as I always knew what I wanted to do. This is simply one of those games where it feels like all the pieces fit together.

But no game is perfect, there are a few bugs here, some even somewhat serious, like a black screen bug that happened on two occasions for me. There were also some problems with collision detection at points, and one of the bosses in the game became unresponsive for no apparent reason, and I had to restart that fight. It would also have been nice if the world felt a bit more alive and reacting to you, particularly as the quests do such a good job at letting you chose different ways of tackling them. It feels like a bit of a missed opportunity.

Those issues aside, I really enjoyed my time with Fates of Ort. In fact, it’s one of the few games I’ve played, that’s longer than a couple of hours, that never really had any moments where I thought it dragged, overstayed its welcome or were becoming tedious. It’s not a super long game, but there’s on the other hand also next to no padding, and personally I prefer it that way. And it’s just a really fun game to play in general.